From The Archives Cuban Cuisine 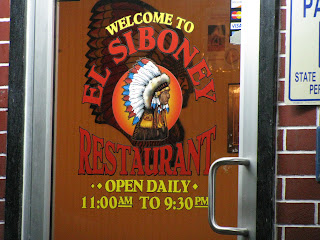 It has happened again, and I got invited out to dinner by a dude who reads the blog. 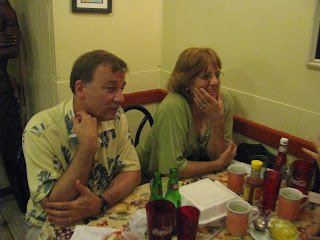 Marybeth and her husband Keith cornered the wife and I at El Siboney and forced us to accept their hospitality, so under their protective wing I was able to order the breaded and fried palomilla steak and boiled yucca. 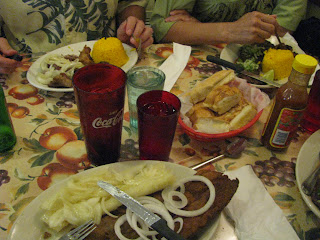 It's hard to starve at El Siboney so my wife and I usually share an order but for some reason she was feeling expansive so she ordered a Siboney steak which comes with shredded parsley, Keith got stuck into a plate of fried pork chunks, hard core Cuban fare and Marybeth took the restrained route following my wife's lead. El Siboney does not overflow with decorative warmth as it were: 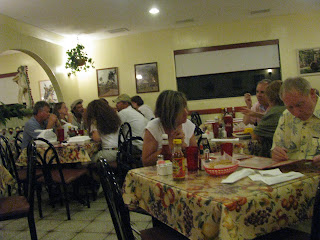 Keith and Marybeth live in the mountains of Colorado but vacation frequently in Key West where Keith was stationed in the 1970s. It's the rare visitor to Key West that takes an interest in the past but Keith is one of those and he enjoys organizing himself around the book Streets of Key West, that I quote from. Marybeth got stuck in with my wife and I was happy to let those two do their thing. 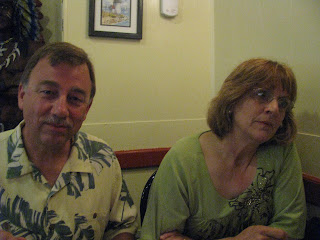 Keith watched me whip out my little canon SX100 and said: "You take your pictures with that?" as I swiveled in my chair to catch a patron involved in enjoying her food: 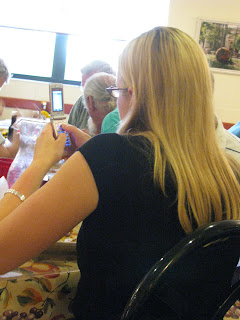 If we ever get a revolution around here text messaging will be the first thing I vote to ban. However the crass younger generation did not set the tone for the whole place. Some people were visiting this Key West institution to enjoy what El Siboney is famous for, low prices and excellent Cuban cooking: 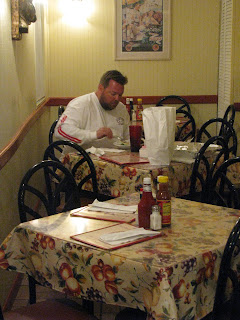 I also took a sneak shot, in the style of A Scooter in Turkey, with rather sneak-shot results, so I will need to perfect the technique apparently: 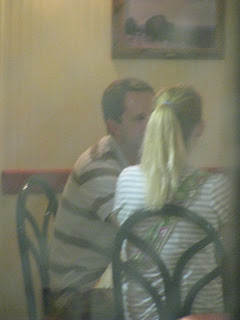 We nattered on for hours it seemed like, time enough to have a Cuban custard, natilla, and coffee, but as I was going to work Keith sank the Presidente beer by himself. El Siboney has moved into the 20th century and now takes credit cards. I rather seem to think it has been doing that for a while but I have got into the groove of paying cash when I eat there: 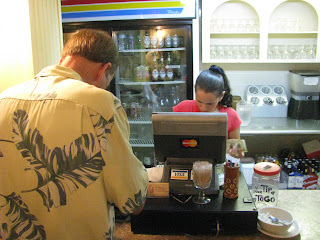 I hope when they return next year they will take up the offer to stop by our house and see how the rubes live in the country outside the metropolis. Rather to my surprise they took me upon my offer of the nickel tour of the police station so I have high hopes we shall meet again. Perhaps with pictures of Key West as was. 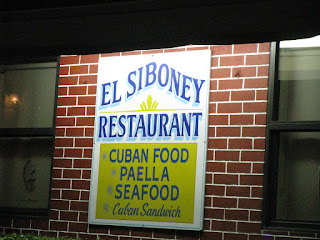 I like eating out at El Siboney, despite the restaurant's sale a few years ago the place hasn't changed one bit. It's still slightly funky, particular and very neighborhood oriented. 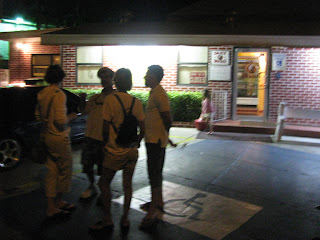 We weren't the only people hanging out happily at 900 Catherine Street.
Posted by Conchscooter at 12:00 AM 2 comments: