How Was The Play, Mrs Lincoln?

As we drove away from Springfield, the surprisingly dowdy capital of the State of Illinois, we heard a report on the radio that there had been a stabbing at a high school in the city. An eighteen year old student had been killed in front of the school and a sixteen year old was lightly injured. A third person, presumably the suspect was not reported in custody and there as usual the story ended. It is noted the creation of the telegraph allowed residents of California to learn the same day of the death of Abraham Lincoln a few days after the assassination attempt at the theater. The  news may now be spread ever more rapidly but may not necessarily be of any more uplifting content. No one will remember the student outside his family while Lincoln died on the world stage and is still mourned around the world. 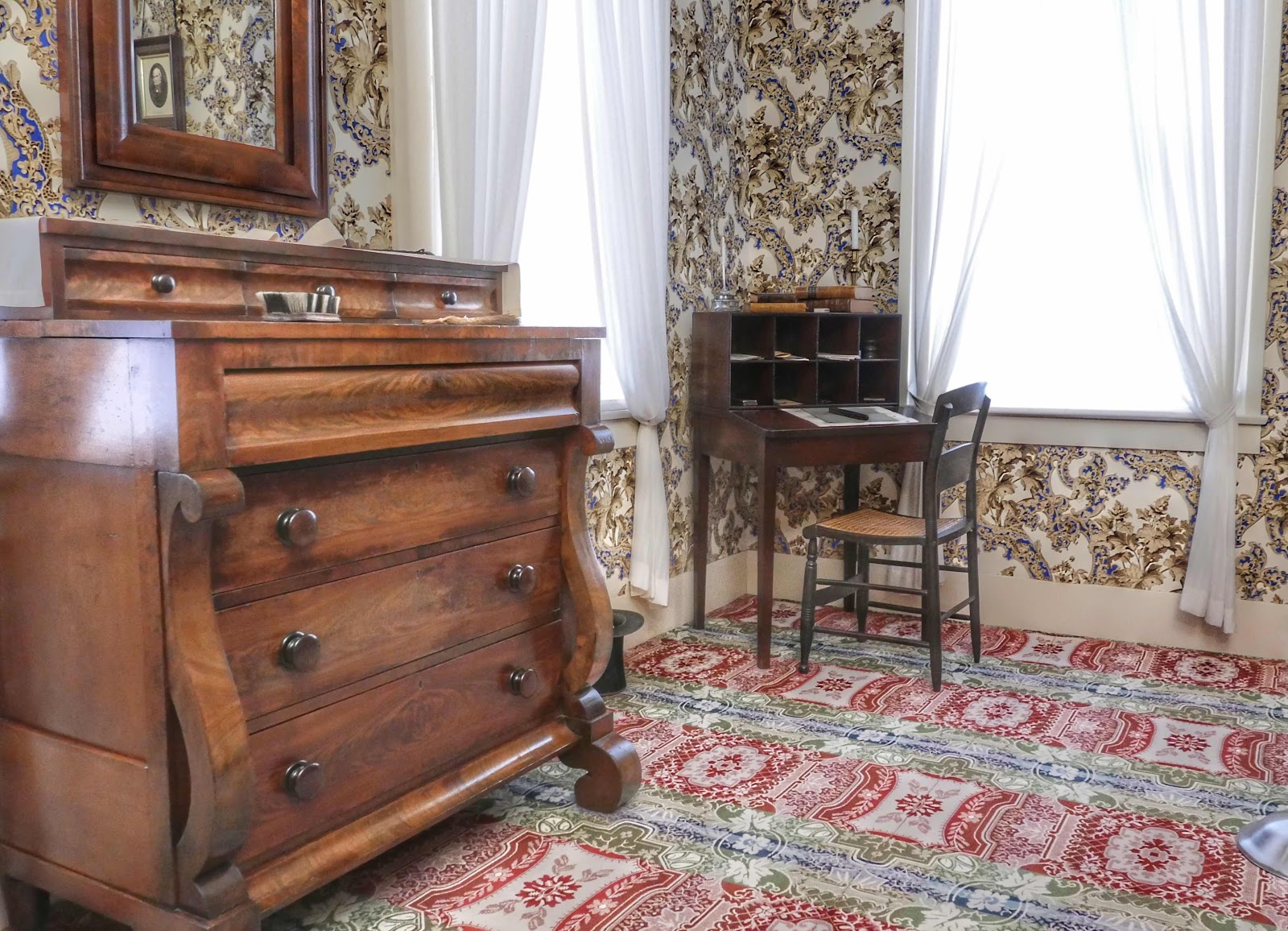 The home where Lincoln and Mary Todd lived happily in Springfield was donated to the nation by his son on the promise no one would ever be charged a fee to visit and so it is. The National Parks Service as ever does a magnificent job of preserving our history and making it available to us on even the most blusterous drizzly cold Fall days, and with the obligatory masks we felt safe enough taking a tour attended by three others yesterday afternoon. Above you see Lincoln's writing desk excessively small for a man six and a half feet tall but all he could afford as a young lawyer and kept fondly by him at home throughout his life. Next to it there is a top hat with a few papers in it to remind visitors Lincoln was a messy book keeper and not given to keeping very good records. Below are the stairs with the original handrail and it gave me goosebumps to run my hand where his had run 150 years ago. 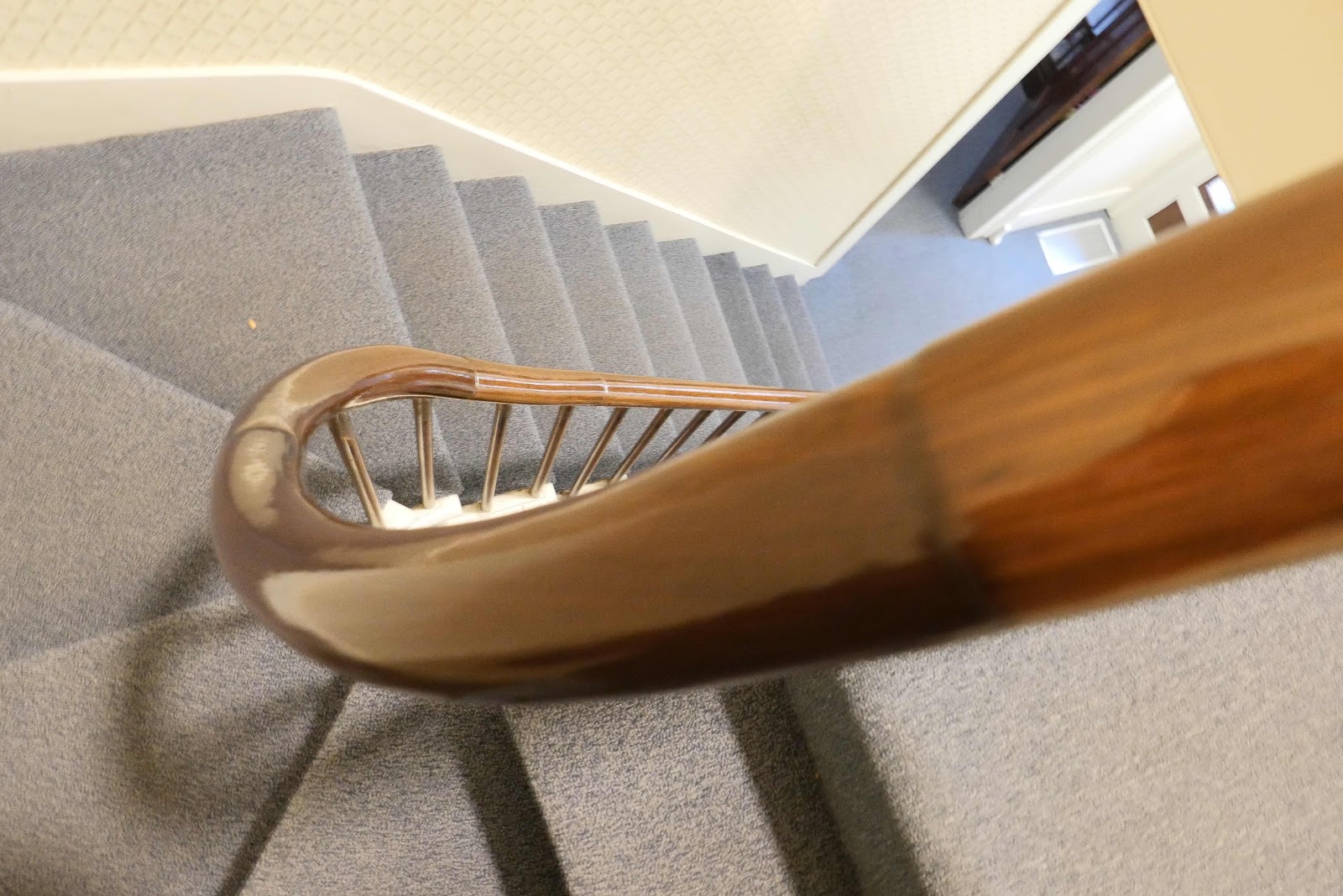 On the subject one has to be glad Mary Todd Lincoln is not around to see us gawping at her chamber pot holder but there it is. Behind it the parks service created wallpaper in the exact likeness of the time from a scrap found on the wall. I can't say I want to be critical of the Lincolns at this late stage but their taste in wallpaper was...not mine! Oddly enough our toilet in the van closely resembles Mrs Lincoln's except ours is made of plastic and is rather more functional and ugly. 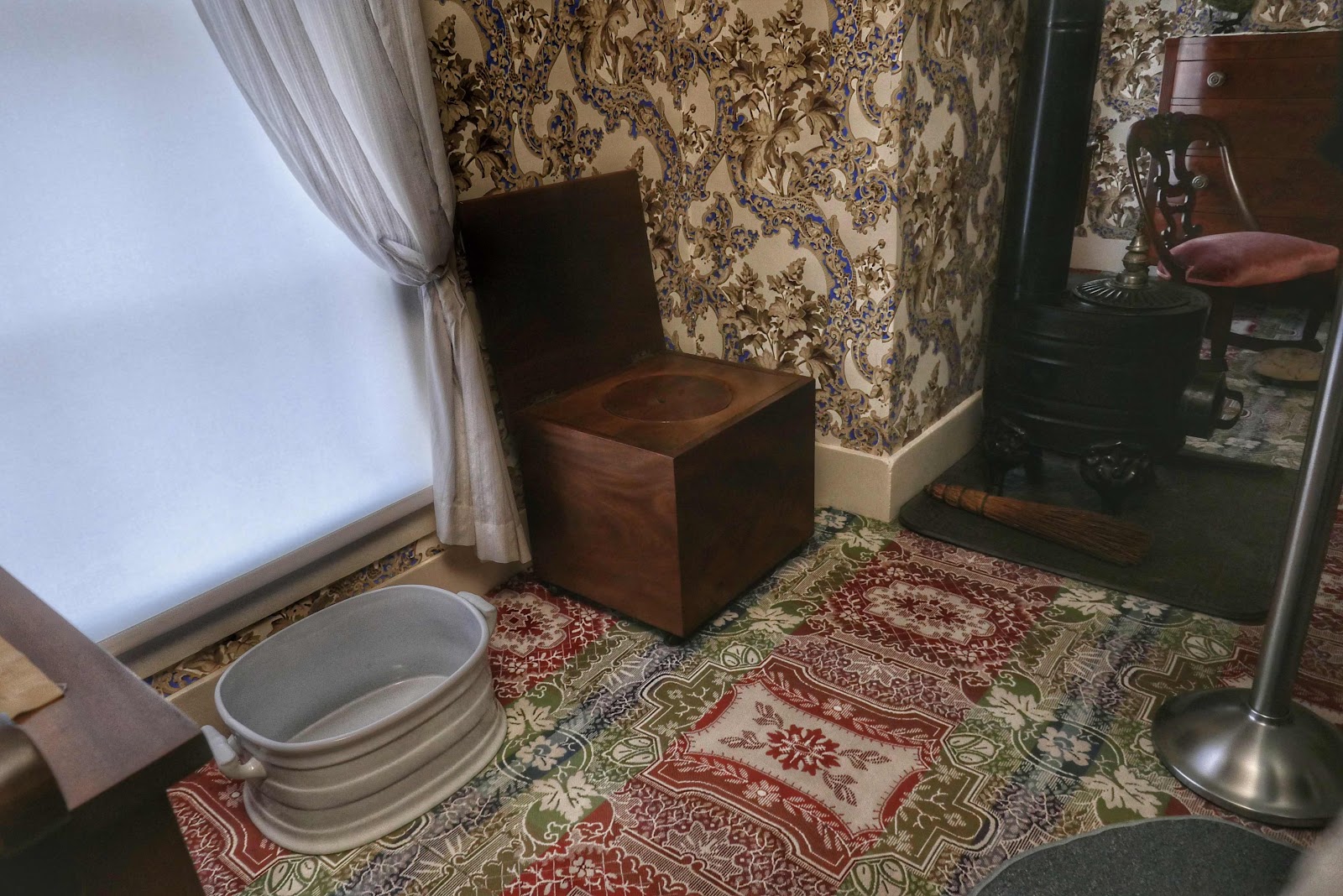 The drive to Chicago to Springfield was two and a half hours along I-55 in mist and rain and mostly light traffic and we really had no idea what we were going to see. Cousin Lynn said it was a worthwhile deviation on our track to our next moochdock near Nashville Tennessee and we followed her advice. We're glad we did. 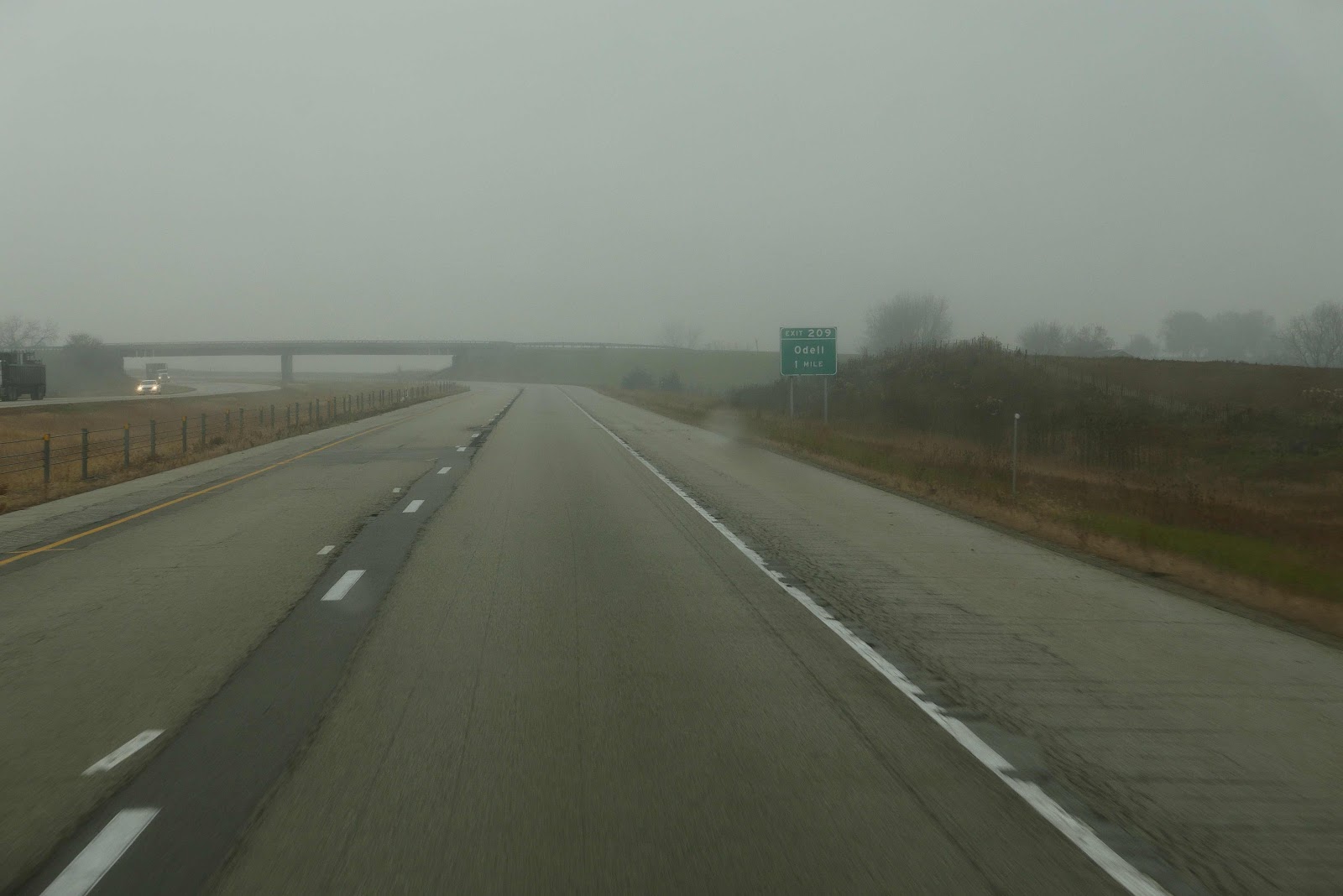 Rusty got back in the groove preferring to sit up and look out at the mist rather than sit in his bed on our bed and look out the back windows. I have no idea what goes through that dog's head. 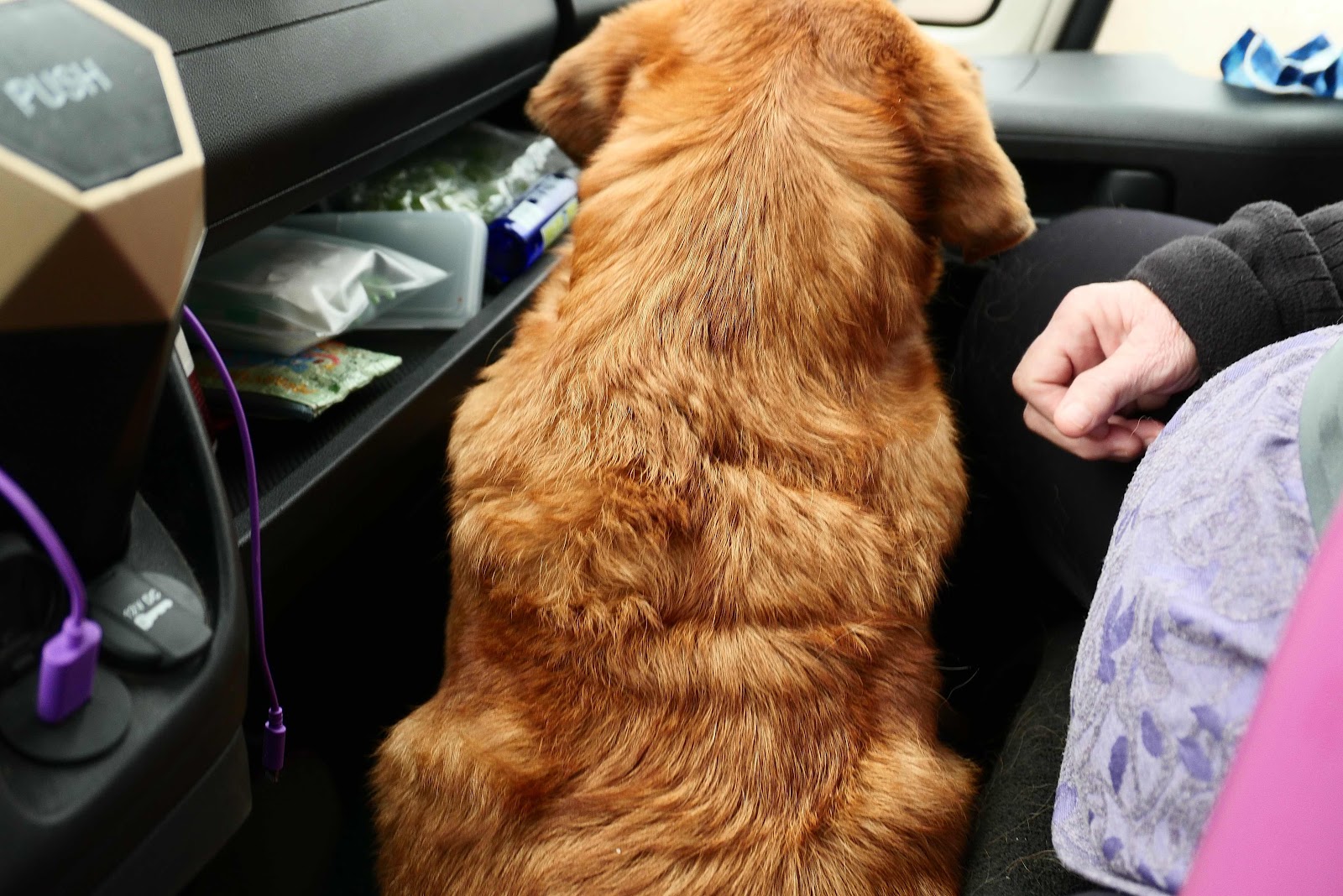 As absurd as it sounds I kept thinking of The Simpsons when I thought of Springfield though Wikipedia suggests the fictional town is obviously an amalgam of towns across the country. I was not particularly impressed by the capital city which may speak to lawmakers wish not to waste resources on their own backyard -unlikely - or whether they just don't much care about what surrounds the capitol building. It is not a town you'd visit if not for the National Historic Site. 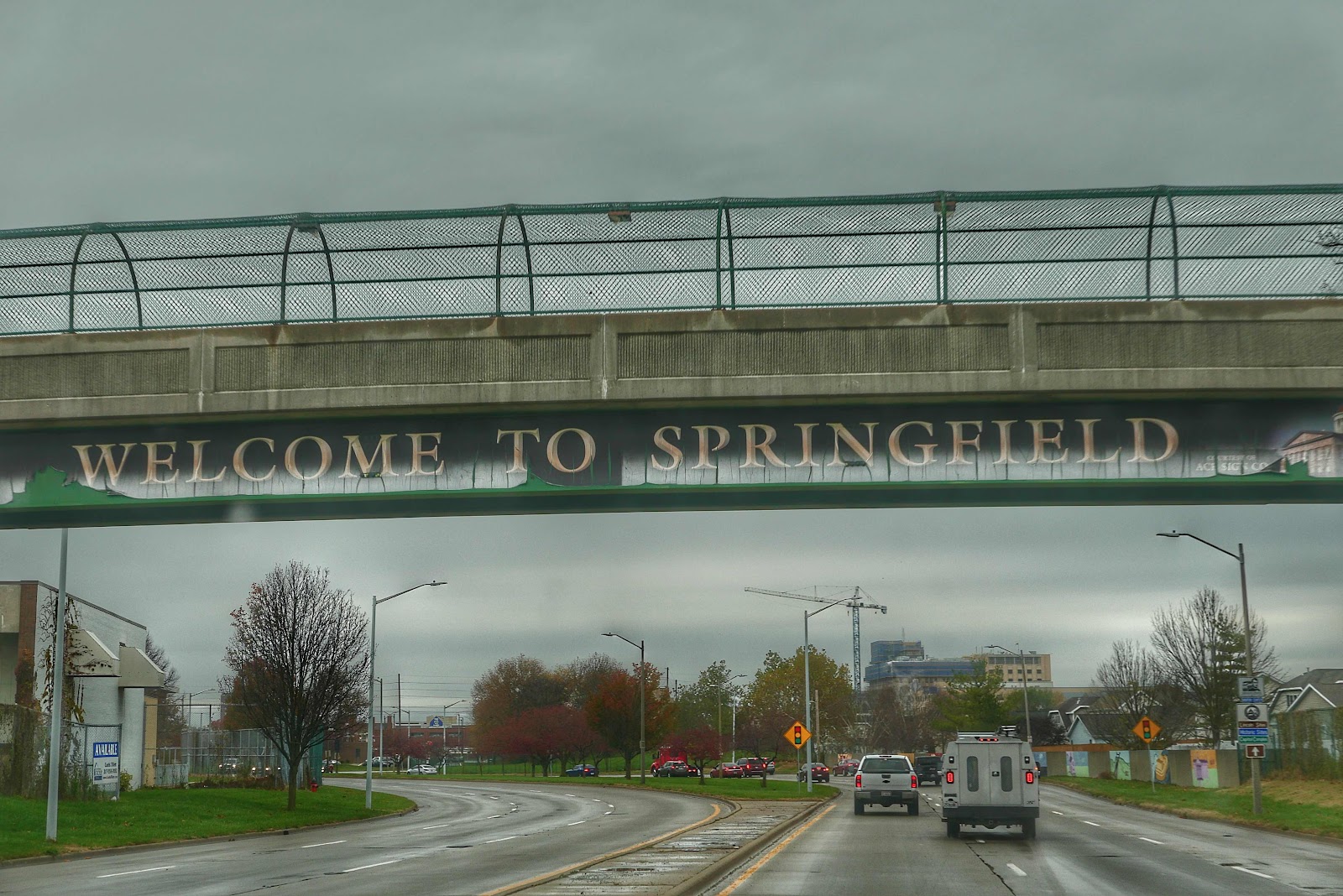 Half of it looks like 19th century brick remodeled, and the other half is concrete Neo-Stalinist block structures which seemed popular in the mid 20th century. The outskirts was a collection of wooden clapboard houses, pawn shops and dive bars. Luckily the parks service does a stand up job with the main tourist attraction here. 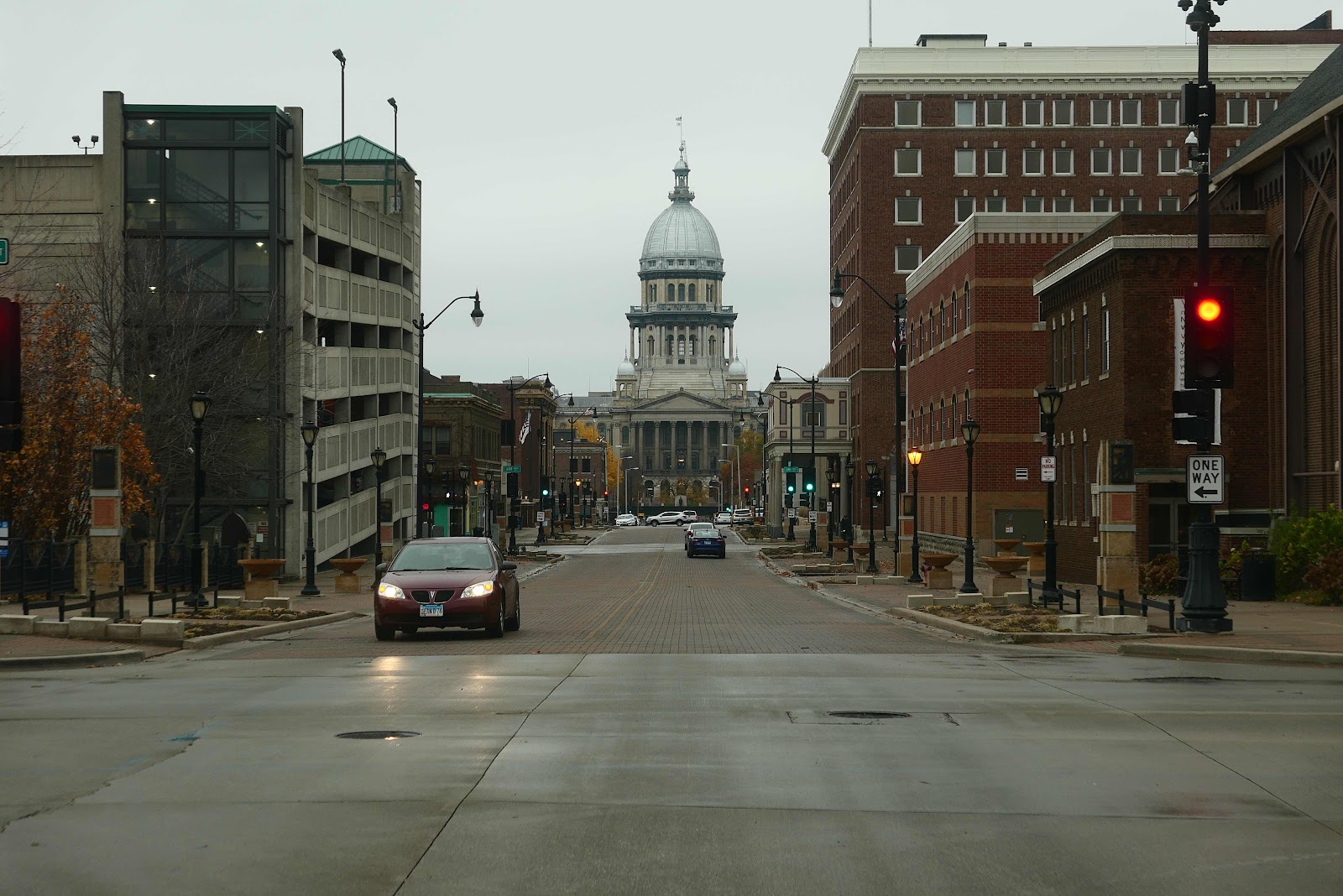 The pedestrian zone that surrounds The House is as good a recreation of 19th century Springfield as you could manage. The streets are paved in brown gravel bedded in tar to more closely resemble the unpaved dirt roads of the time. Obviously the trees are larger than they would have been but the electric street lights resemble the lamps of the time and our tour guide, Ranger Max pointed out the old state capitol was four blocks one way and the city limits just two blocks the other way from Lincoln's home. 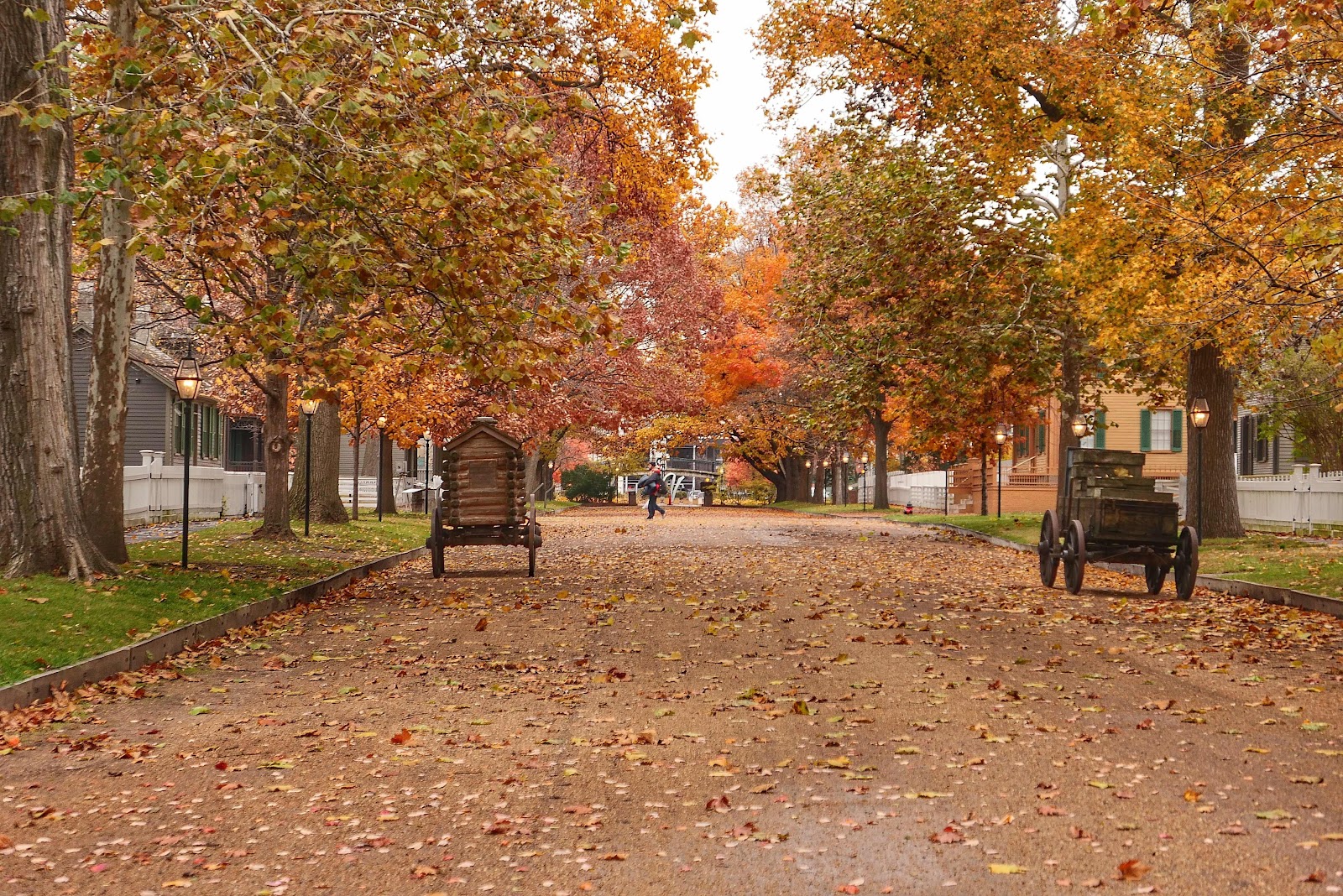 First as always we walked Rusty around the perimeter of the park and up the street within. 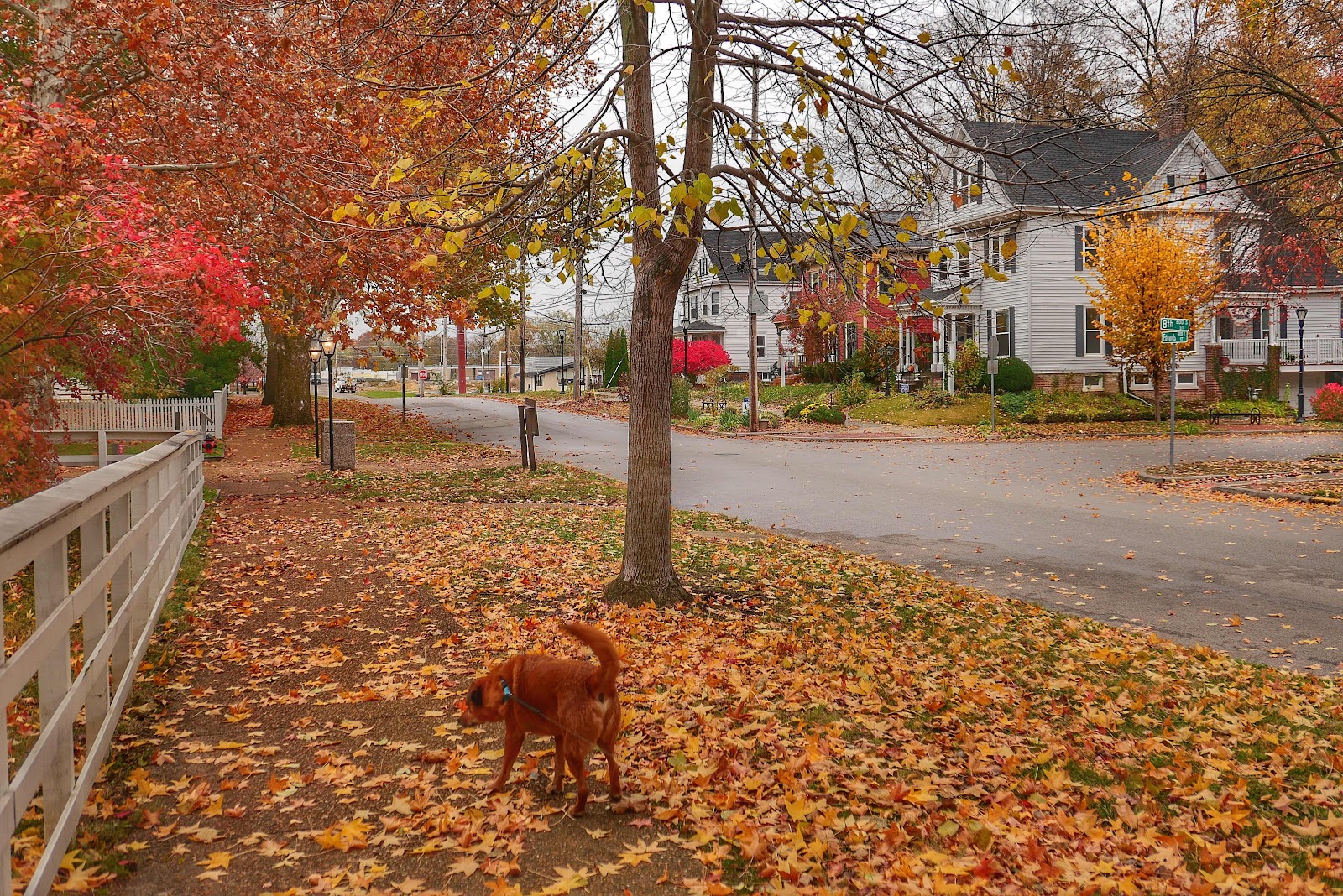 A cart advertising the local candidate for the highest office in 1860. 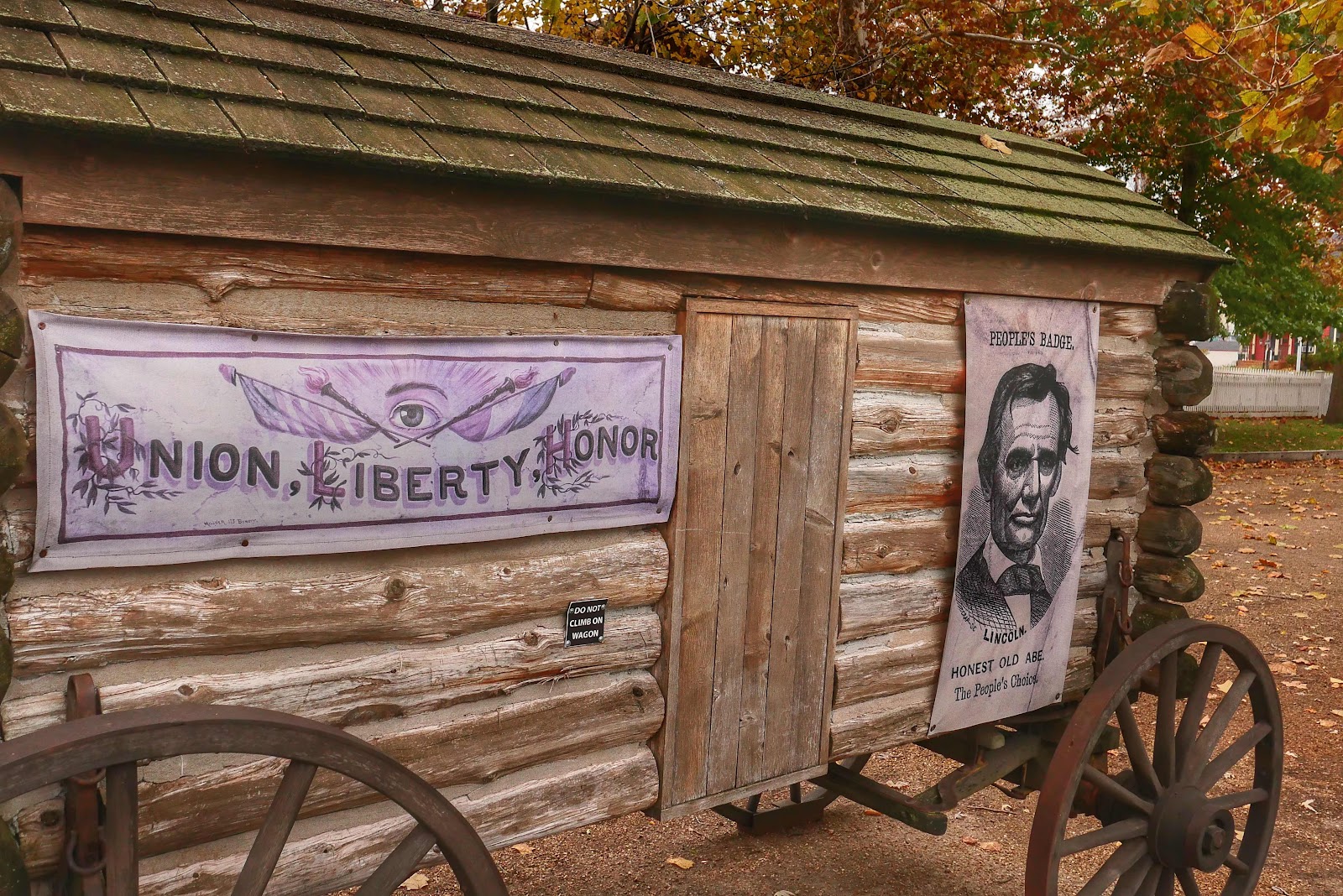 Lincoln came to Illinois from Kentucky where he was born (we've seen that home already near Bardstown) married to the daughter of a wealthy Kentucky slave owning family but he and Mary were both abolitionists, not loudly or forcefully apparently, in Springfield. He was a capable lawyer and bought the home in 1841 and paid fifteen hundred bucks cash. 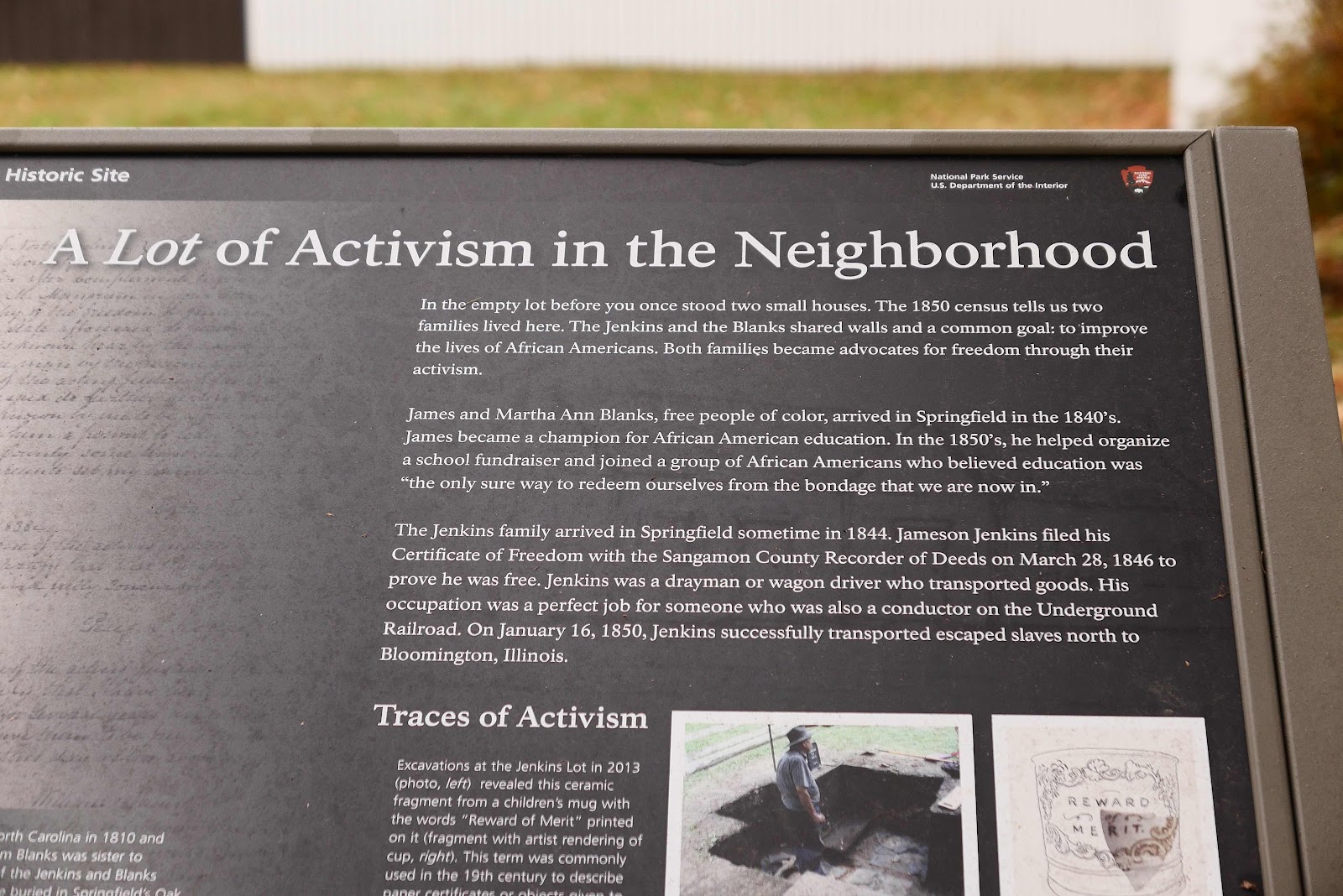 Apparently the house was then a one story structure resembling this, the Arnold home so called, across the street: 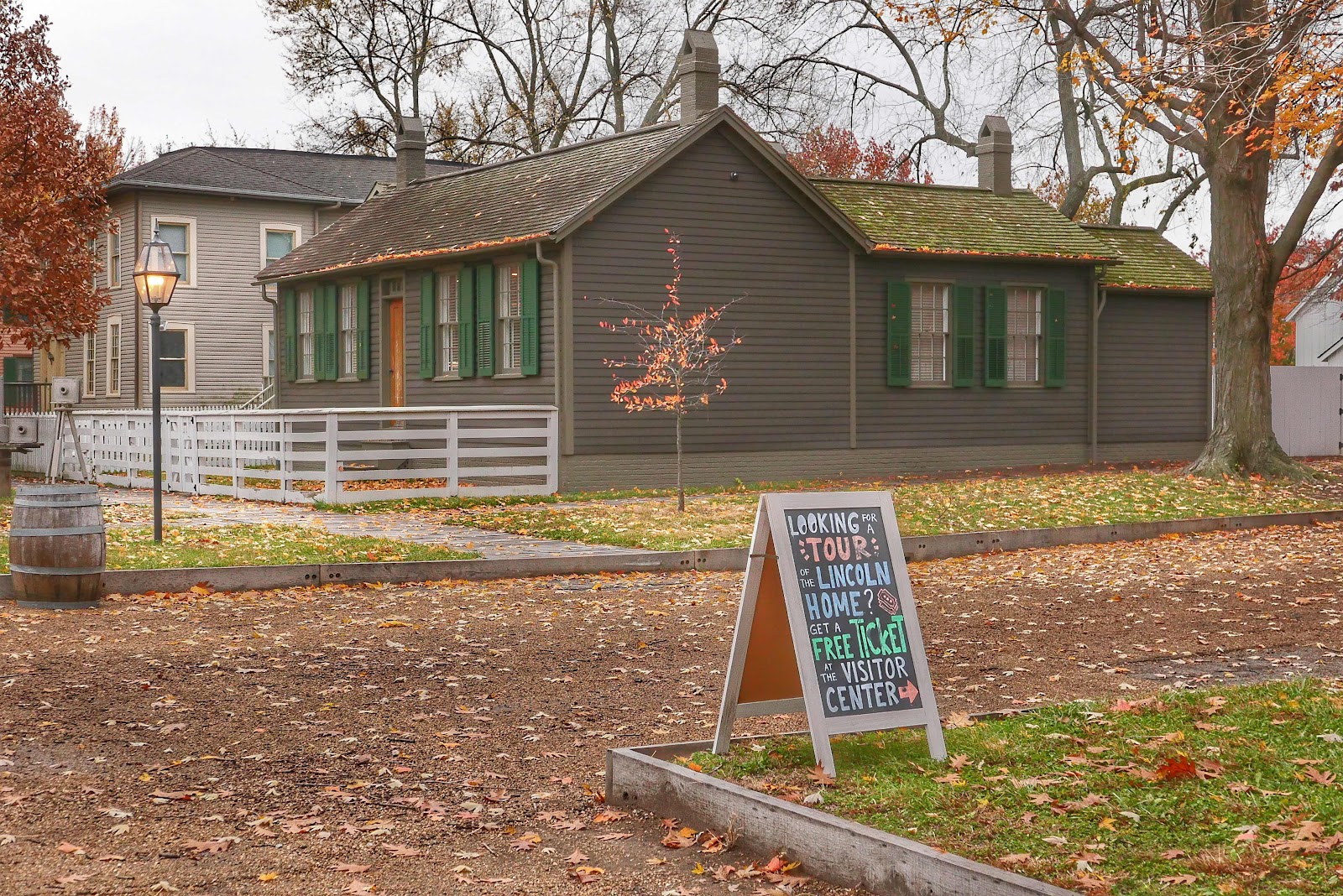 This is the spot today. After the assassination Mary Todd couldn't stand being back in the house and moved in with one of her sisters a few blocks away. The house was rented out and most of the artifacts and furniture disappeared when the renter moved to Washington. In 1878 Lincoln's son donated the house to the nation and some few pieces of original furniture remained. 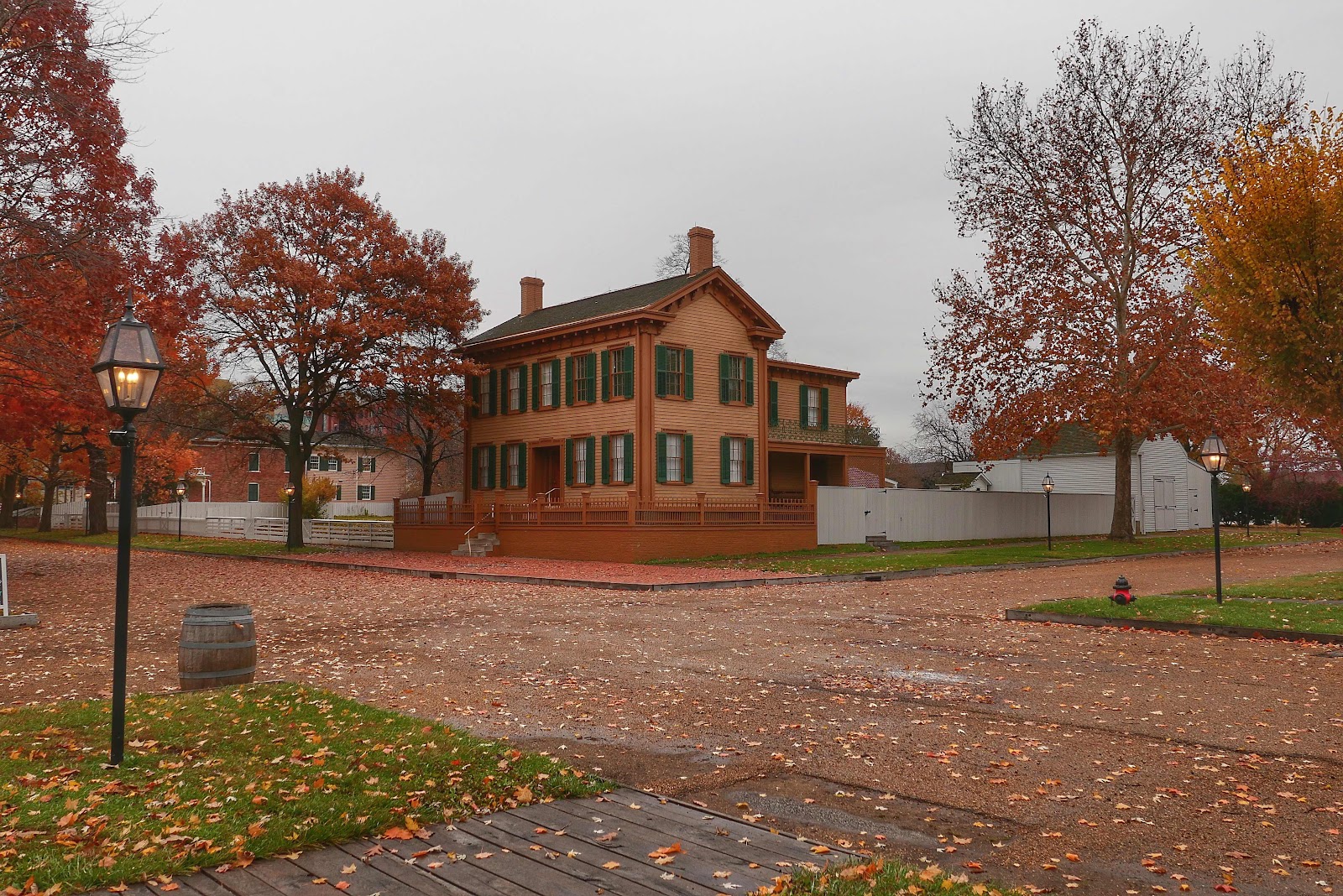 There are fake cameras set up across the street at the spot where the Parks Service says most photos have been taken over the decades: 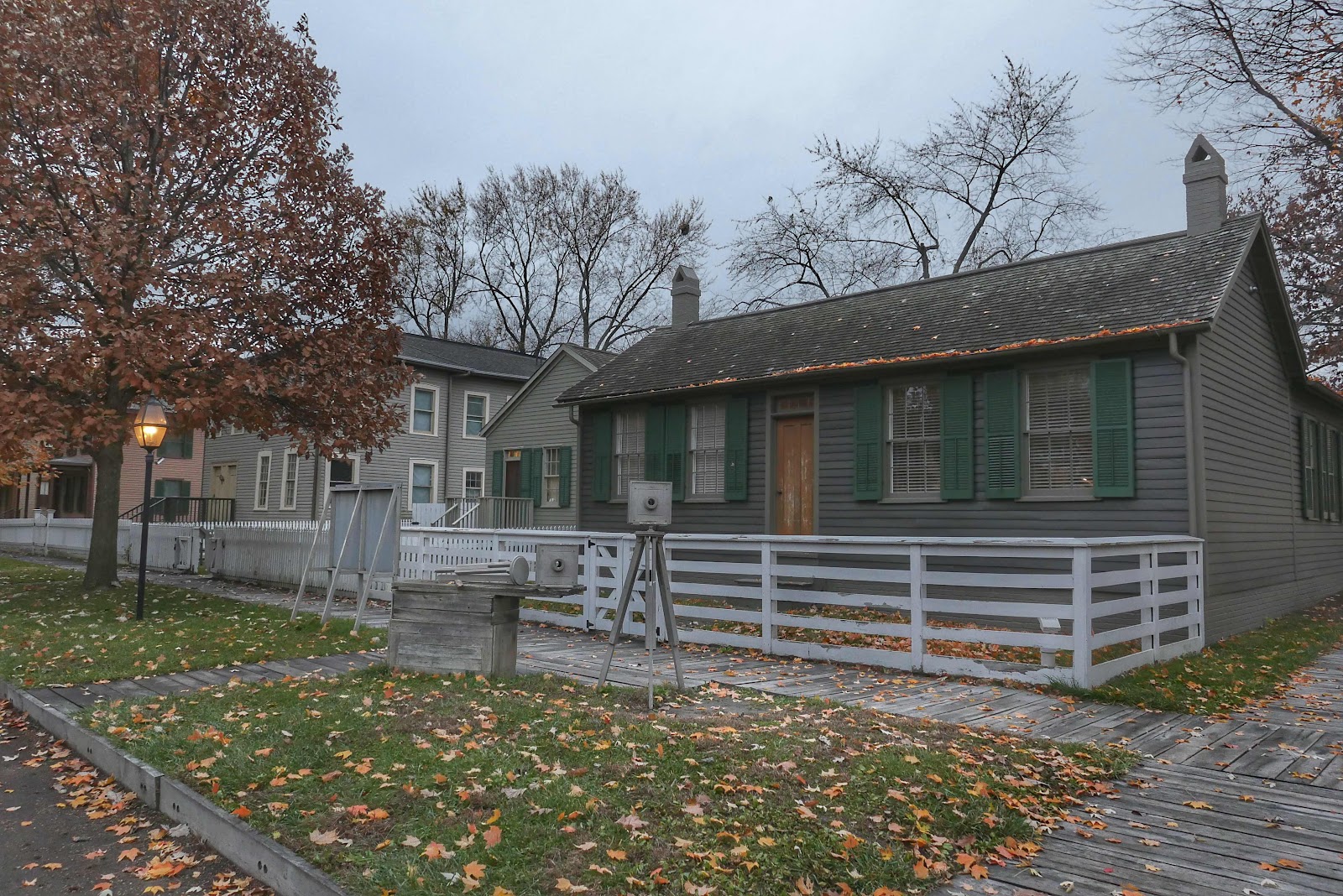 The tube looked like this! I prefer my free standing picture above. 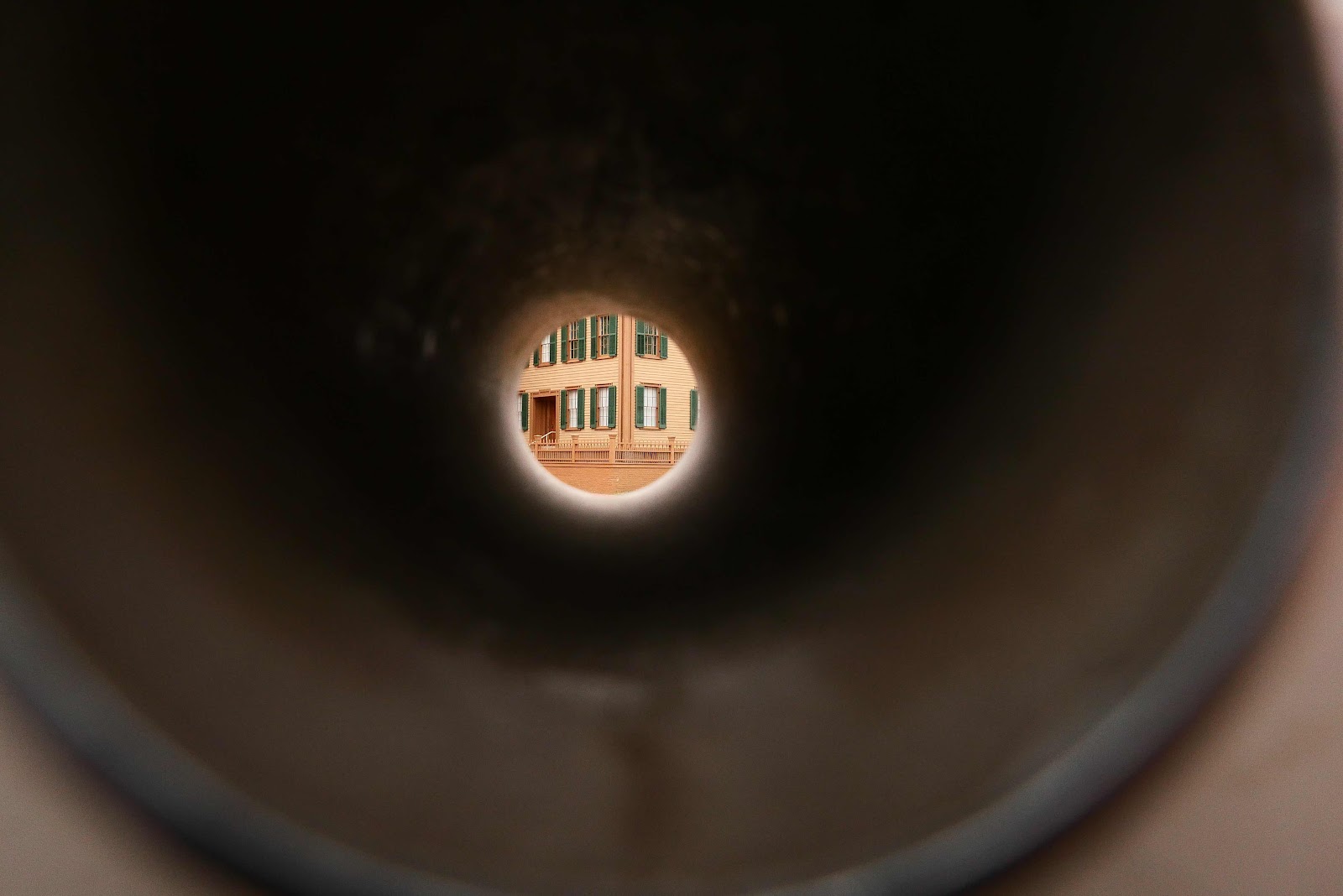 The street is an interesting mixture of homes some occupied by Free Negroes who managed to escape bondage and lived next to the future president in a state where they weren't subjected to the Peculiar Institution. Apparently the Lincolns hired a number of servants at the going rate of a buck fifty a week with board and lodging. They met women from all types of backgrounds including more freed slaves, European immigrants and so forth. 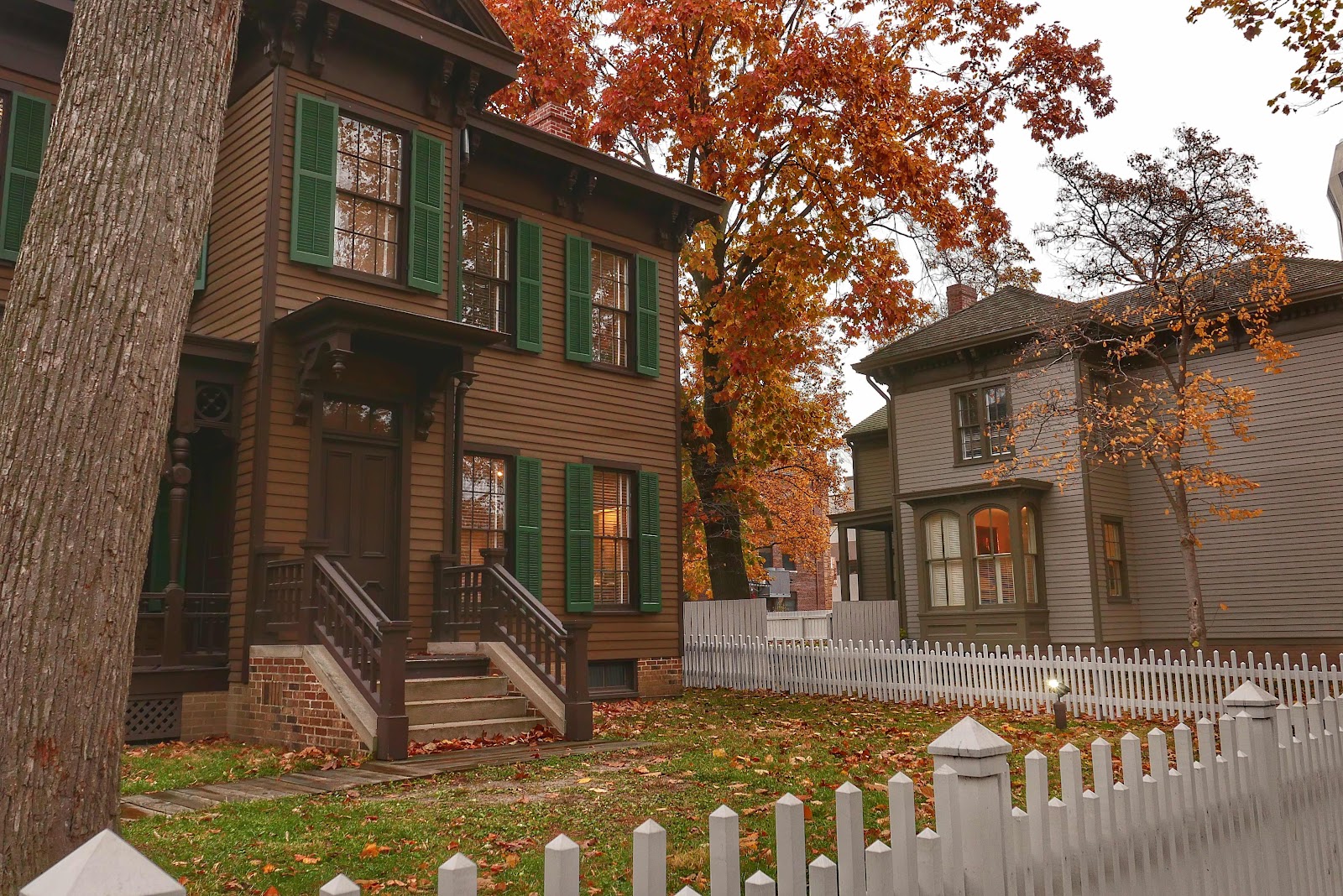 What I got most clearly from this visit was that Lincoln was a successful middle class lawyer but more than that he had a really happy family in Springfield. One son, Eddie, died at three years of age from tuberculosis in 1850 but the Lincolns were doing well in their family life. They had money friends and were well liked and respected, which for most of us would be plenty and enough. He really was a decent man. 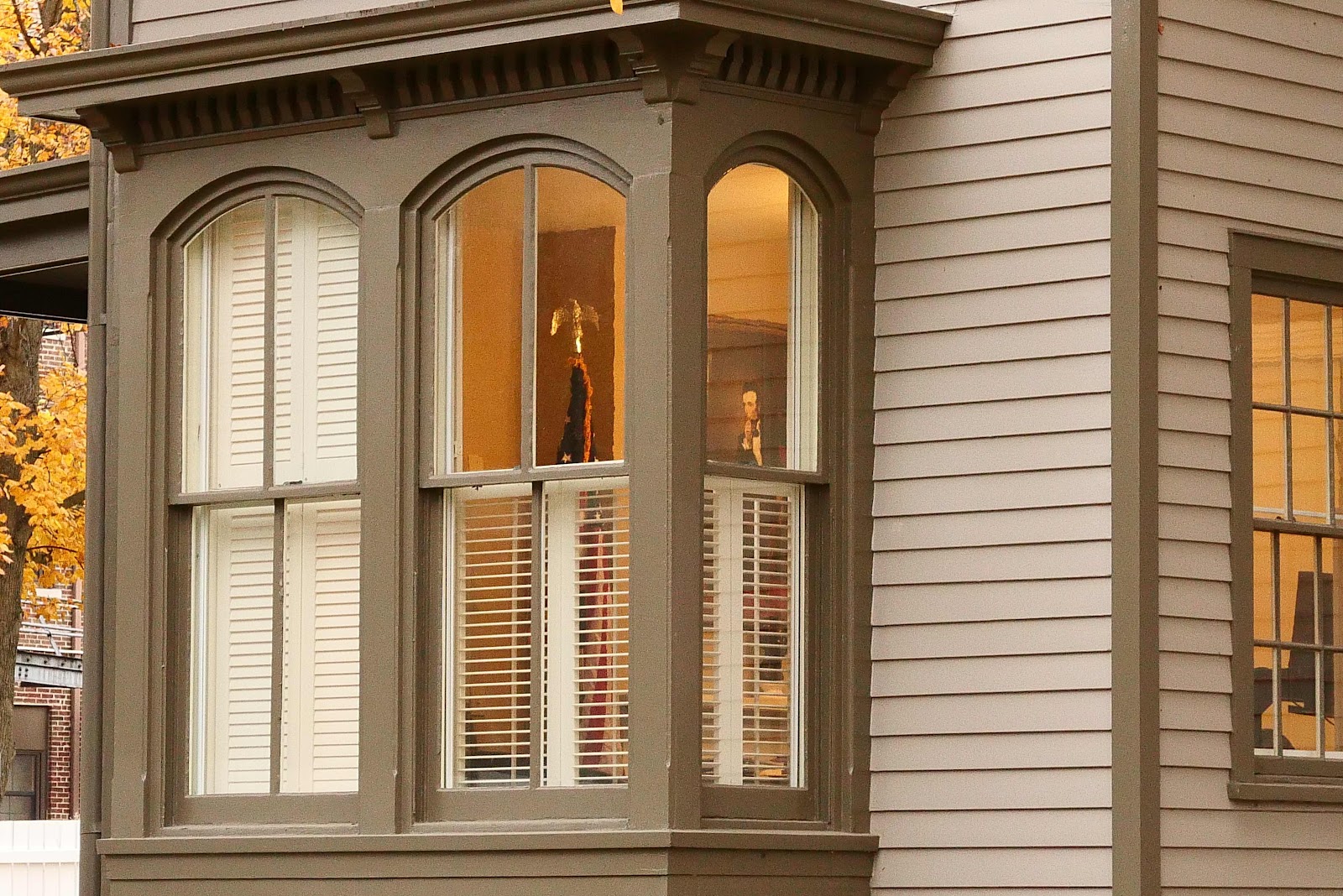 I suppose there had to be ambition to propel Lincoln and his politically active wife to seek the presidency but I could not help but think if he had quit politics after his stint as a US Representative and two failures to get into the Senate he would have lived a fulfilling and rich life among his friends. We would not have known him certainly and he would not have become the name most associated with freedom that we know now but his would have been a life we could all envy today. 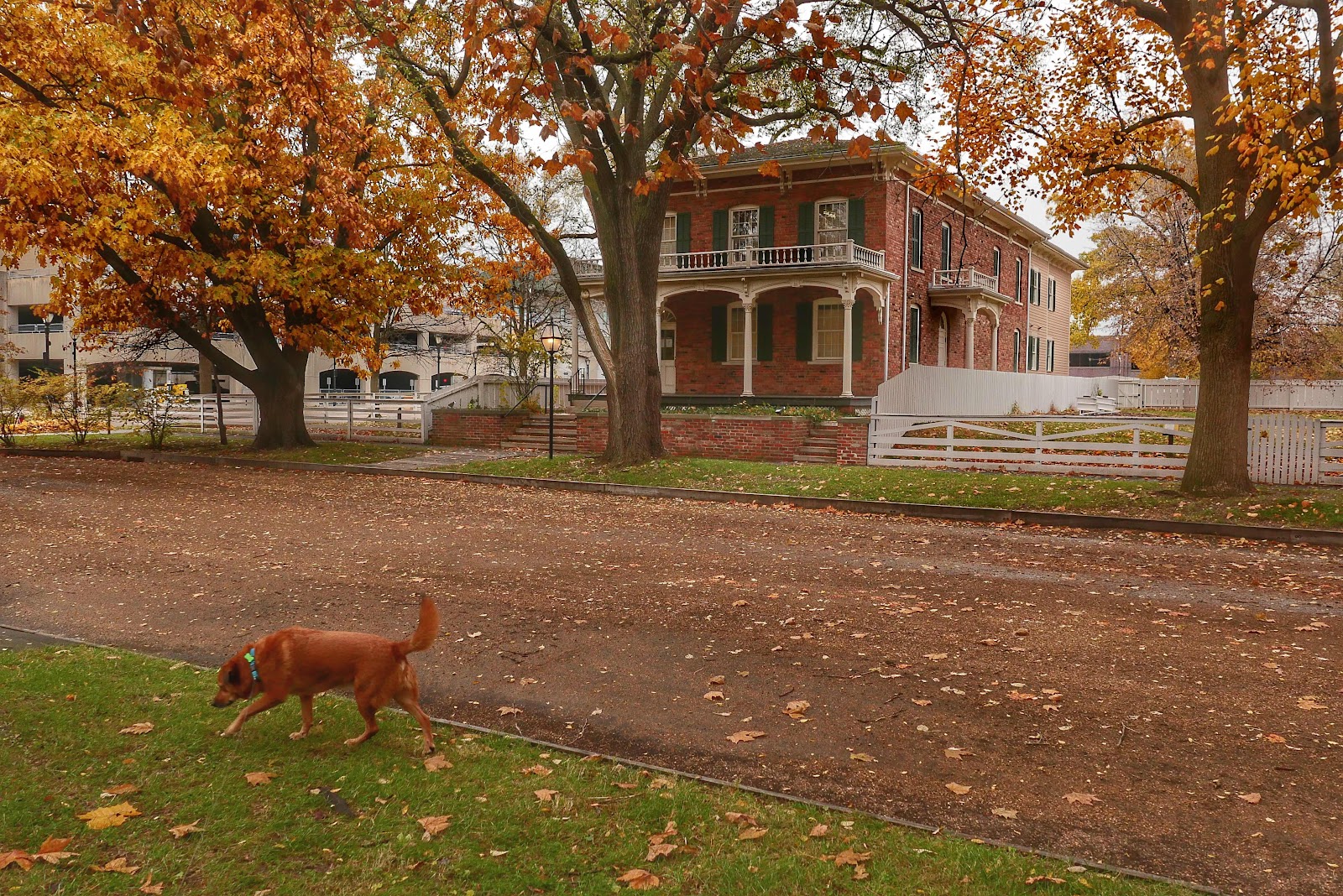 Below is a photograph of the house when the winning election result was announced. The country had been struggling since the founding to deal with the issue of slavery and the past decade had seen the cruelty entrenched by Supreme Court rulings and intransigent planters desperate to maintain their wealth. Yet Lincoln took up the job and not with pride or bluster but with concern and apprehension. He knew what was at stake. 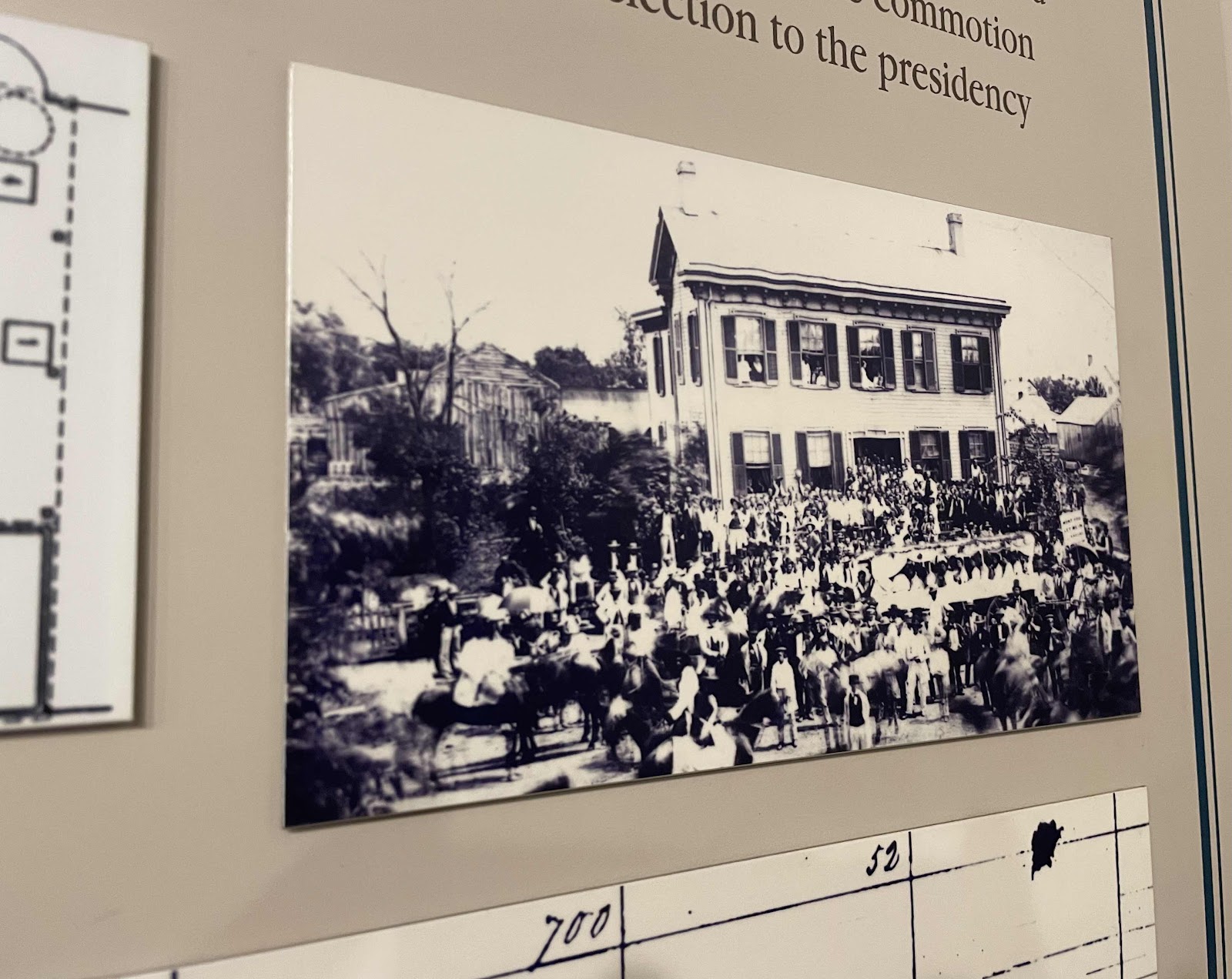 I saw a note from his neighbor written to the new President, referring to his train passing the house on the way to Washington and how he hoped Lincoln would make his mark and be second only to Washington as viewed by history. I guess he got his wish, most ironically, for his now famous neighbor. 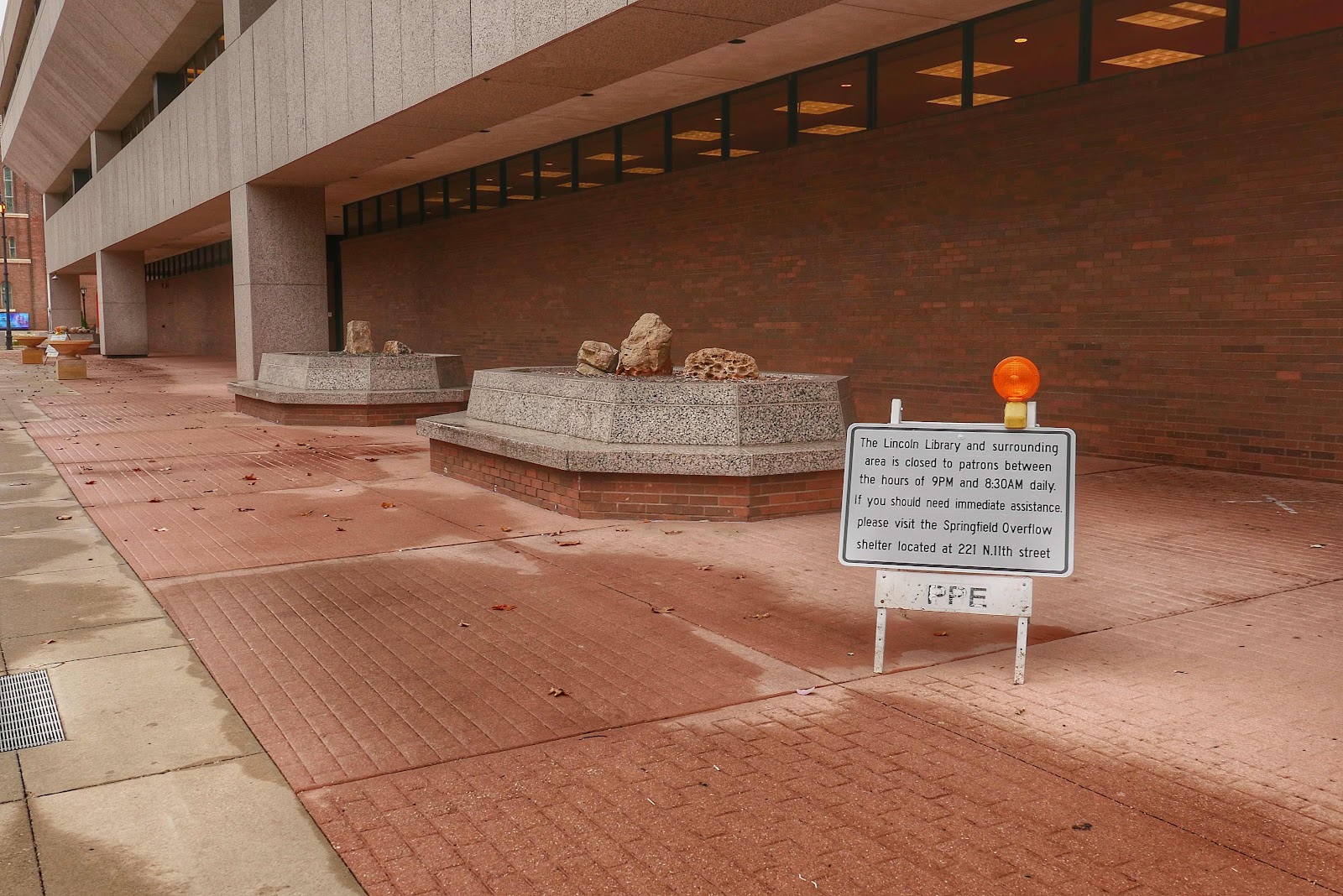 Springfield outside the park has its own problems to deal with today. Slavery is in our rear view mirrors but poverty doesn't seem to excite much attention among our leaders. 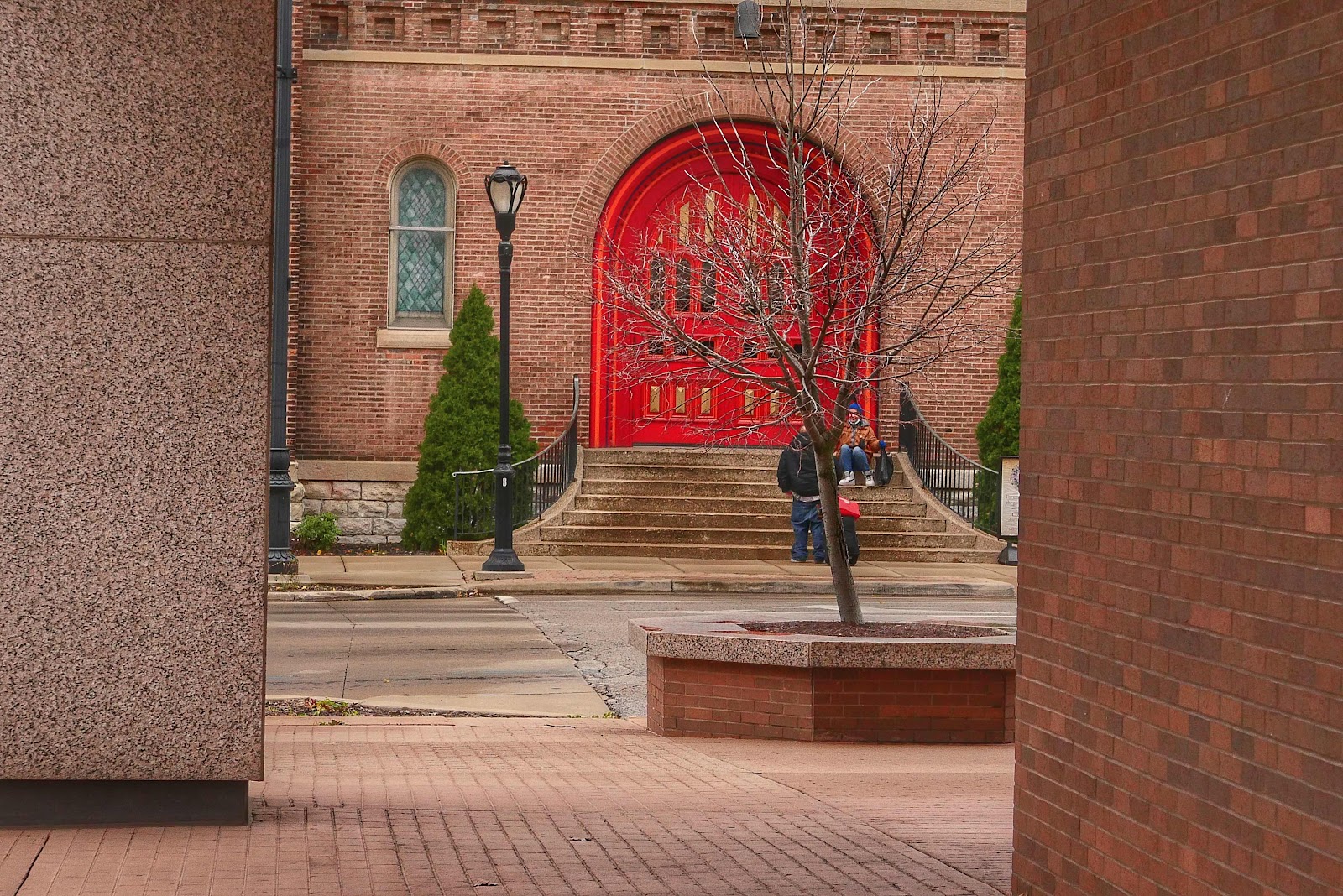 I wonder what Lincoln would have thought of the modern fad for treating the poor as morally deficient. More of the ghastly concrete bunker buildings, just across the street from the lovingly preserved Victorian wooden homes of the Lincoln era: 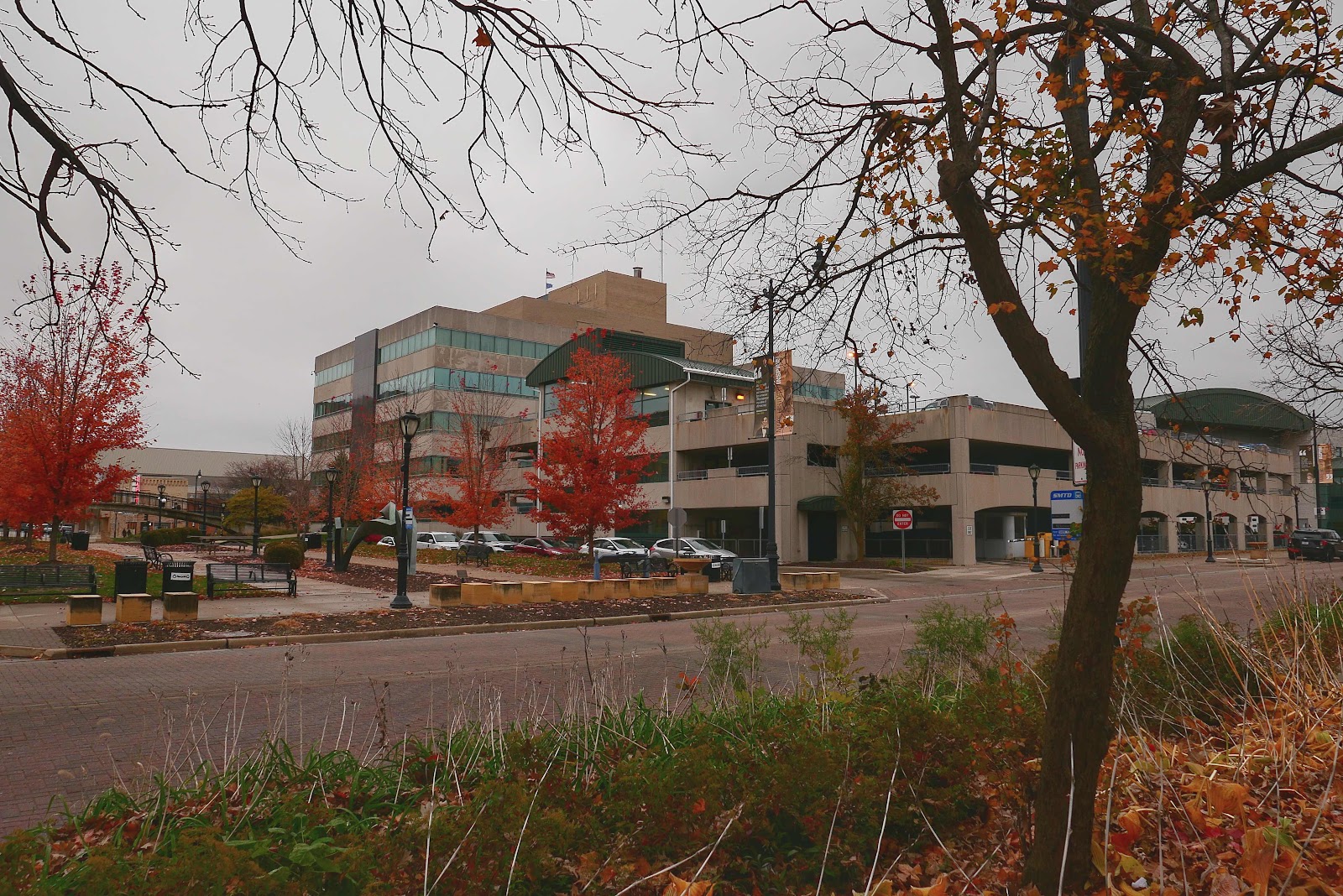 Churches galore, I counted four on this block within site of the capitol: 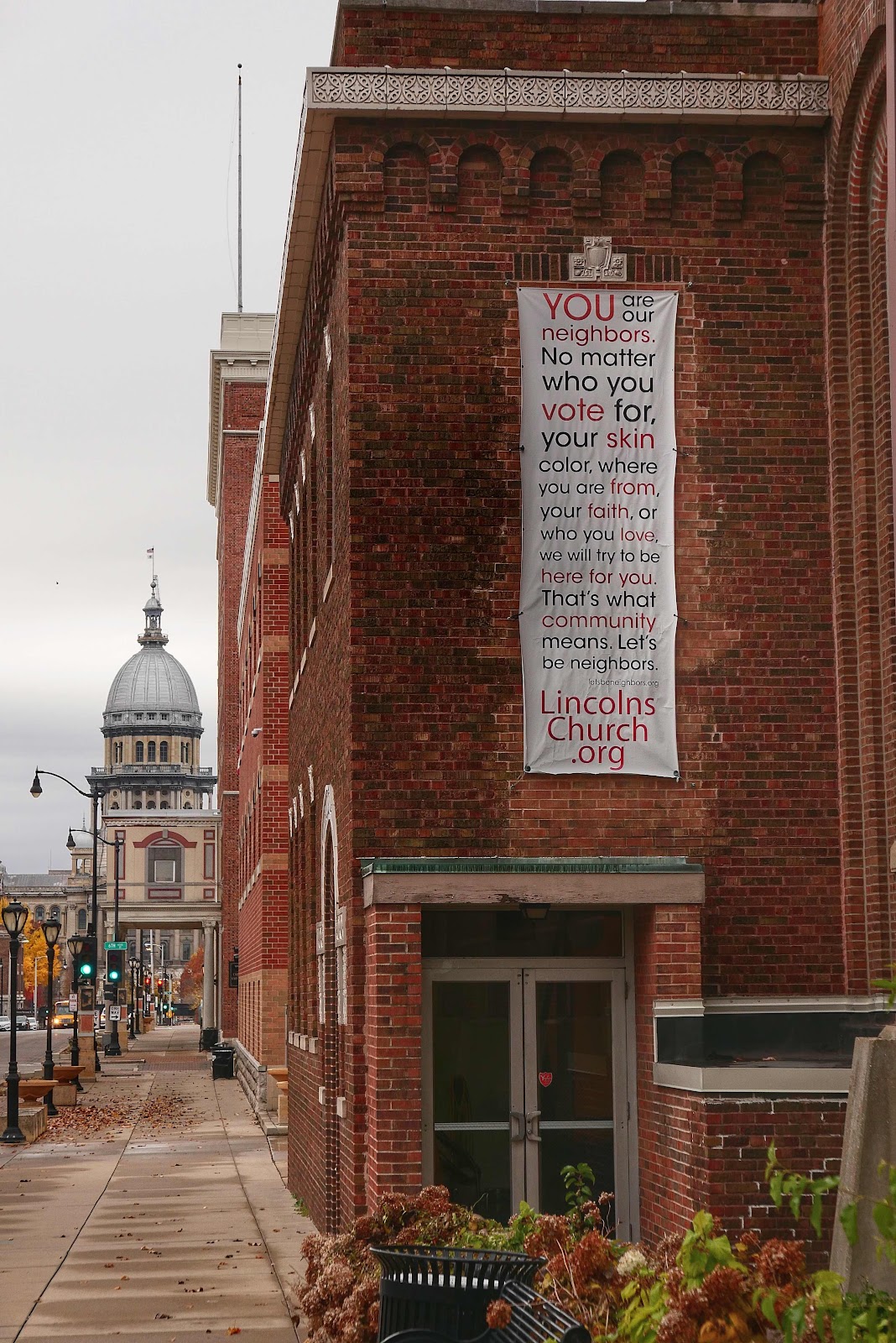 Modern communications cannot be disguised against a foreground of history. I suppose it's the price we pay to have what we have, and personally I'm glad to pay it. 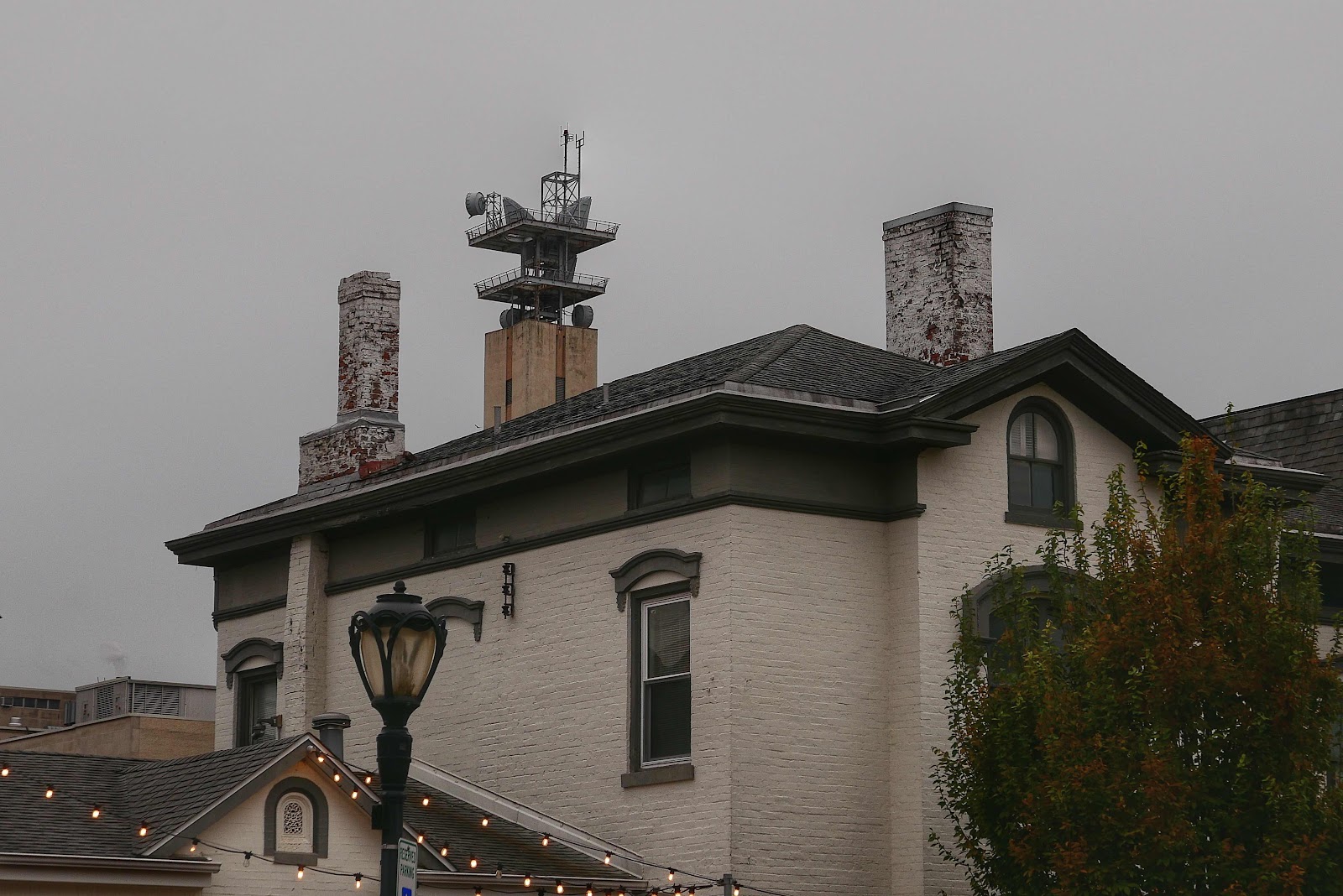 Layne retreated to the warmth of the van, our own symbol of houselessness(!) while Rusty and I explored on the raw wet windy afternoon. 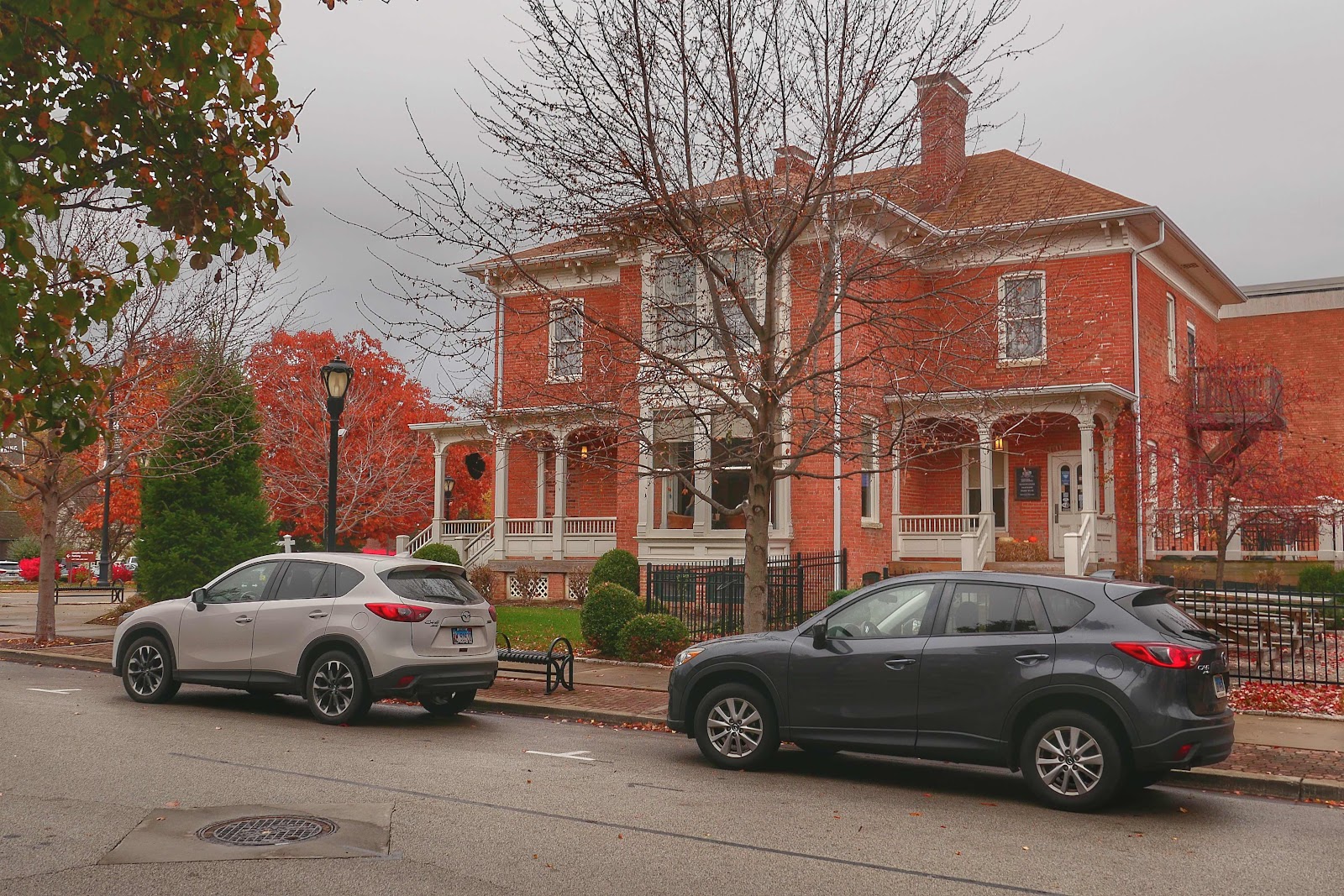 It was a treat to be in a Federal Building where masks are required, on a small out of season tour. Our guide told us in summer he will have visitors from up to 40 different states. On the last tour yesterday he had had visitors from just 12, which suited us perfectly. 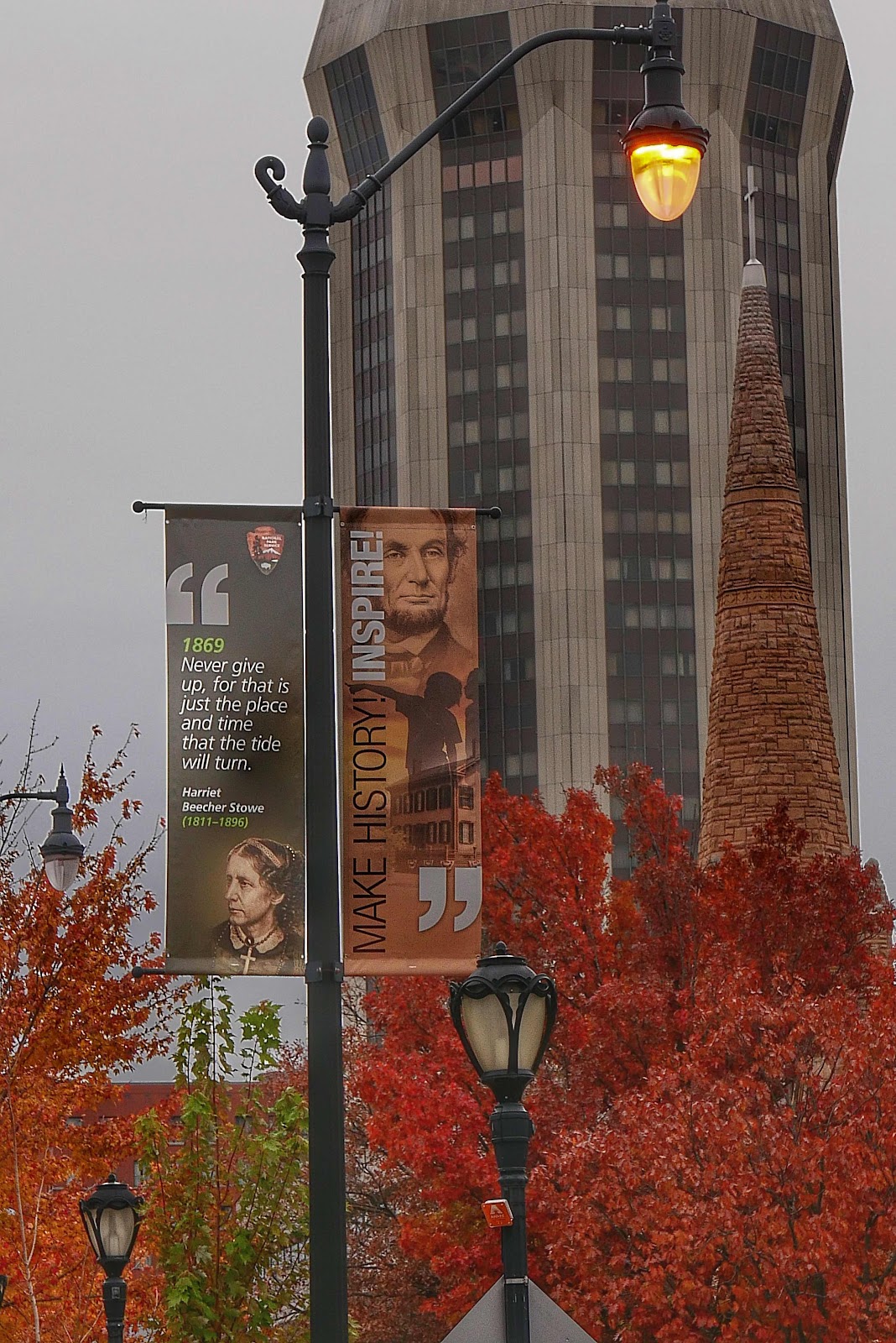 It was a good moment to visit the Lincoln home as we seem to be living through a period of similar upheaval though one trusts not so violent. It's good to be reminded that politics for our ancestors have been just as unsightly and chaotic as they are now and the Republic has made its way forward.  My next task is to read a biography of the man, burdening my Kindle with another tome -by David Donald- recommended by Max the tour guide, a Lincoln aficionado. 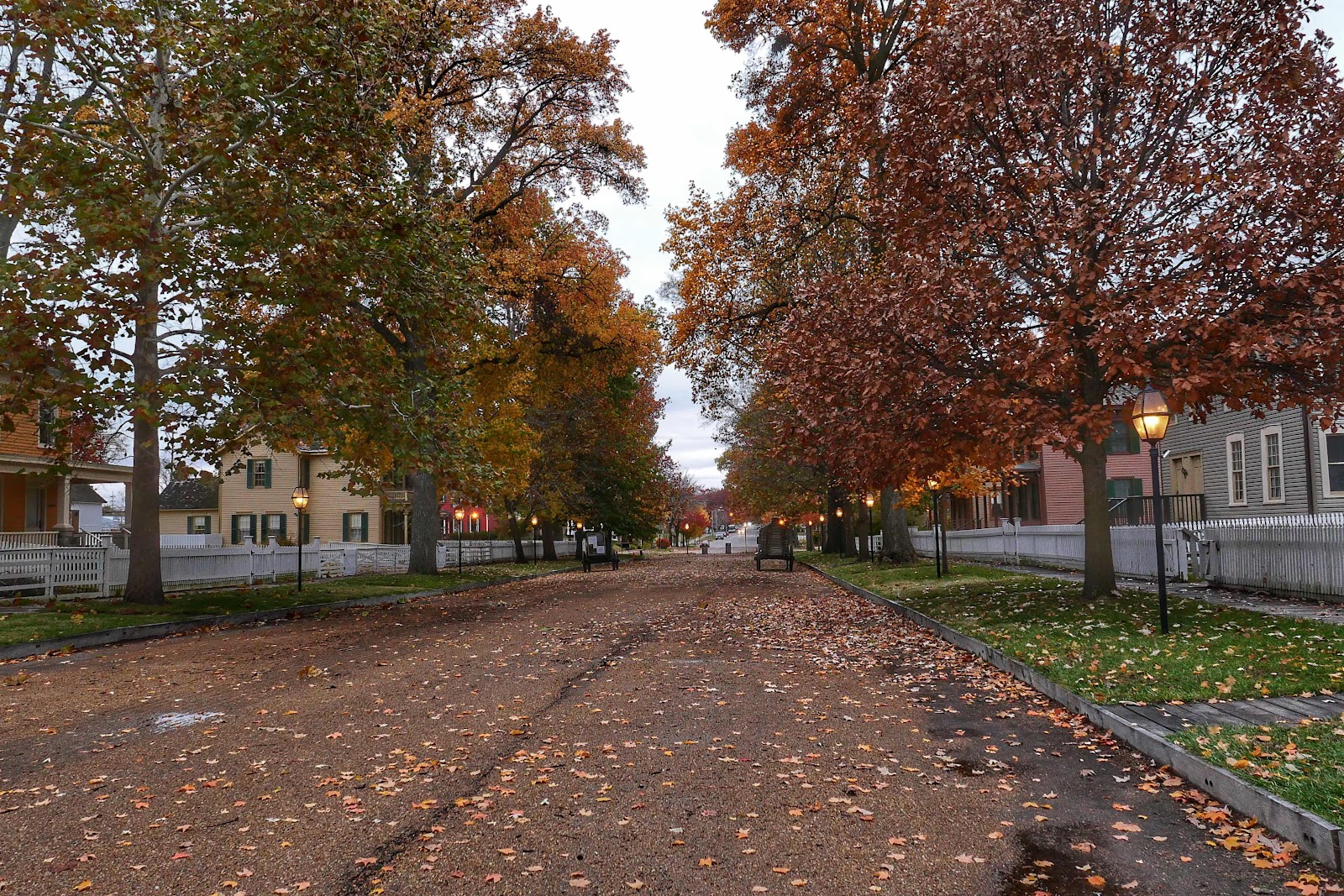 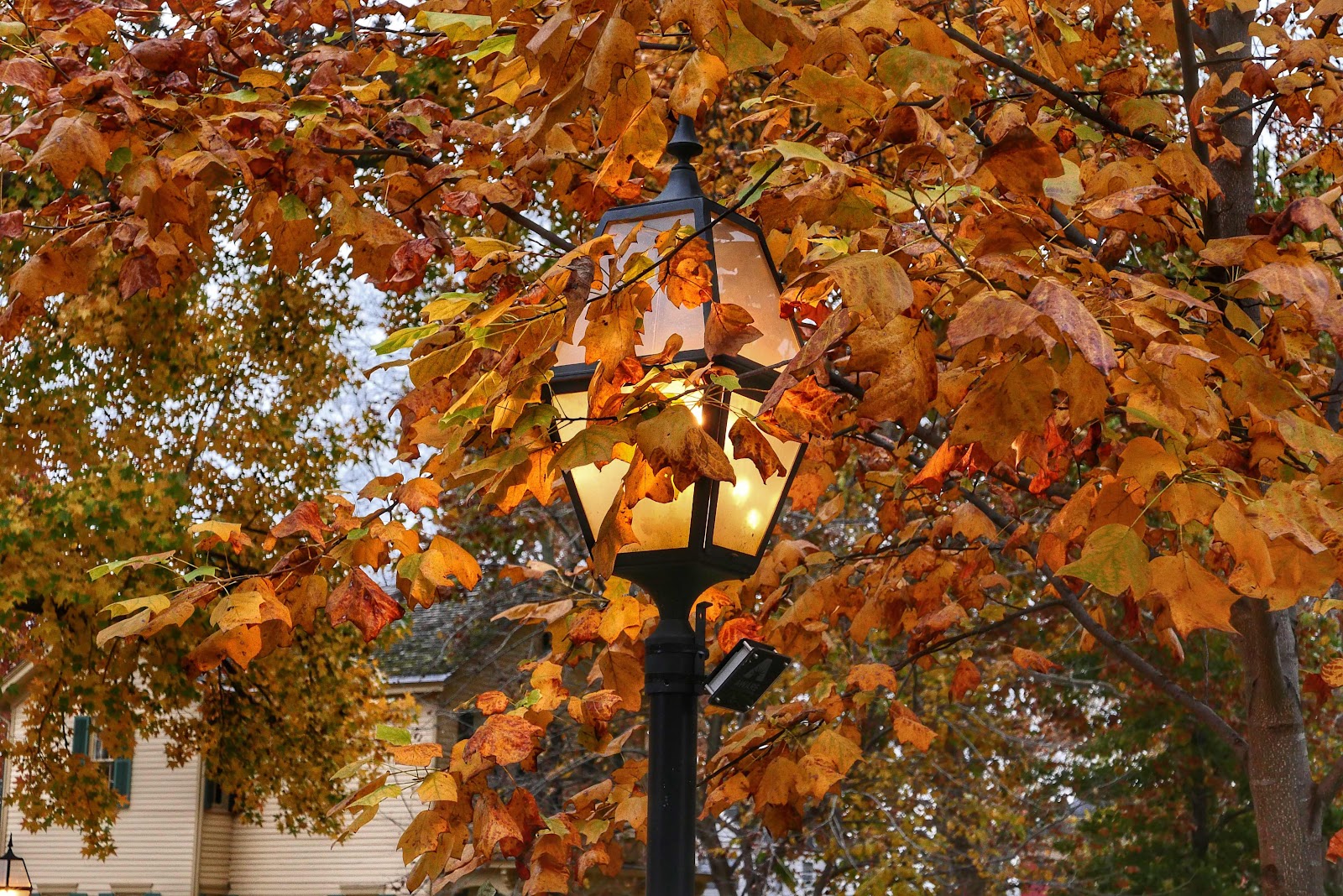 By four thirty it was getting dark. Our journey from Springfield toward St Louis was a windy rainy bleak affair, tucked up in the warmth of the cab of the Promaster and enjoying being on the road. More moochdocking in our future getting us ready for the wide open spaces Out West. 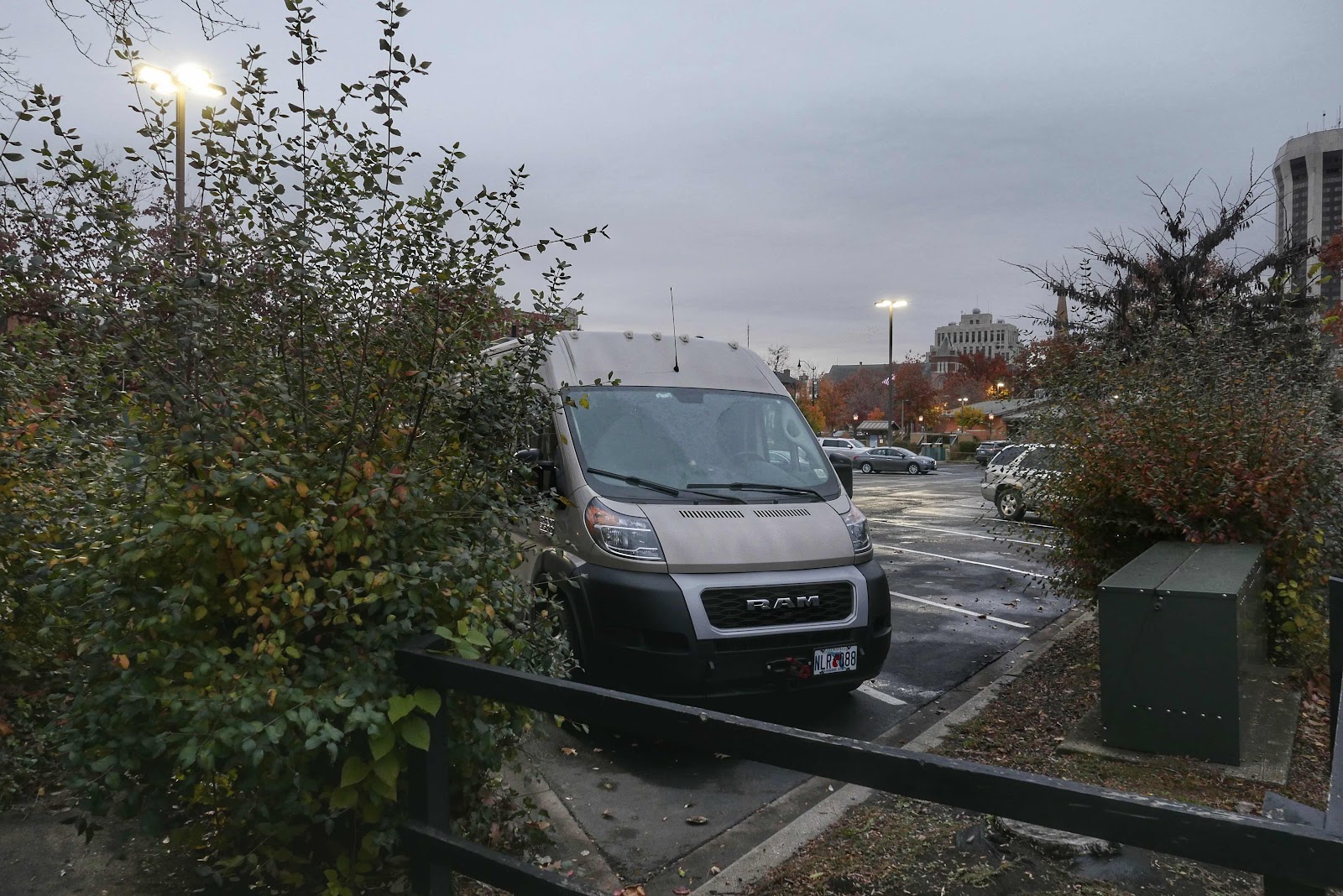