The Made In Key West Band

﻿
Walk past the hard Rock Cafe  and you'll see there is  a narrow alleyway  that disappears apparently behind the mansion that is the Key West Women's Club, an edifice as fossilized as the club itself, yet in the darkness there is a little cobbled square and behind the square is a little wooden building and that is a  hive of wondrous activity every winter.﻿ 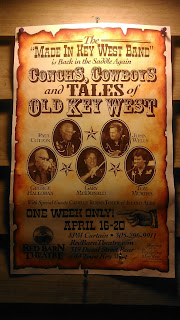 Sometimes it can feel onerous to lift oneself out of the comfort of one's own home and plod off down to the three hundred block of Duval Street, only to disappear up the little alleyway consulting the time in the manner of the White Rabbit of  Alice in Wonderland fame, tut-tutting about the time. 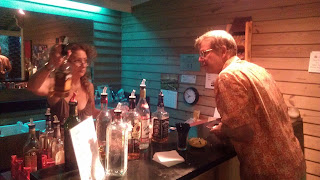 In order to avoid such a feeling of aggravation one buys  season's worth of tickets in advance. We in fact check the schedule and decide which plays we like the look of, and there being enough to justify it we do a season's worth. Then we cozy up to the bar, have a drink and sit on the porch to wait for the opening of the doors. 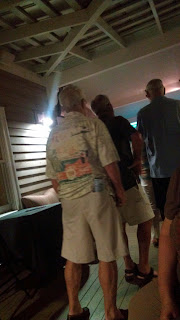 In years past the Red Barn had put on a lot of musicals and frothy silliness which are not my cup of tea, but the crop of dramas and thought provoking productions has increased each year and this year I am aggravated I managed to miss the opening production which was The 39 Steps, a story I have enjoyed in print and on screen but never live in a theater. Oh well. 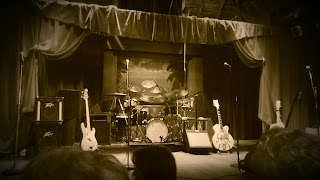 Our latest outing came last month when we saw the final night of Conchs, Cowboys and Tales of Old Key West, put on by the five members of the Made in Key West Band. Between them they claim 153 years of residence in the Southernmost City and because of that no doubt some cross dressing, even of the mildest sort was soon on display. 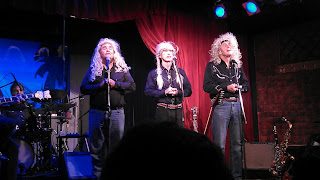 The band did a nice job, and they were having a rollicking good time on stage, a bunch of friends who for the most part go way back and are extremely comfortable together doing what is not at all their day jobs, except perhaps Paul Cotton who's musical career goes a long way back, enough that he is on a Wikipedia page  devoted to the band Poco...luckily for me as I had no idea who he was. 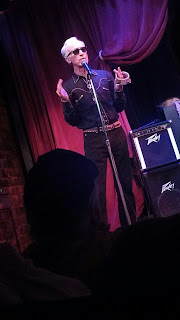 Above we have George Halloran a  local figure in the field of law. he has taken on a few sacred cows in the name of the people and he also knows how to sing. I thought he rather resembled Clint Eastwood in his shades. Below we have teacher Tom Murtha: 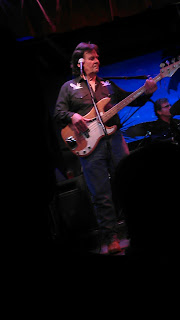 Paul Cotton sang with a richness and presence that betrayed his professional career. It was also noted he was the only member of the band who did not know Mel Fisher personally. Murtha was proud to wave around a silver real hanging from his neck given to him directly by the august treasure hunter. 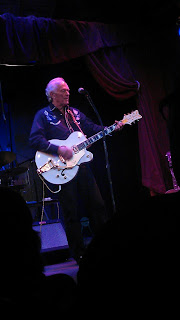 Gary MacDonald played the drums with fervor in the back of the stage. He and Mimi MacDonald have been leading lights in the theater operations in Key West for decades. 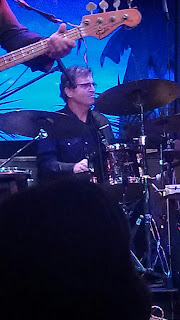 John Wells took on the role of de facto band leader,  grinning with delight at his own jokes, his plastic features expressing delight and surprise, desire and astonishment vividly enough to pull the audience into his performance. Some few visitors not completely familiar with Key West lore fell in love with him and his performance cheering him on, rowdy and happy, entertaining the staid theater audience with their seat dancing in the front row. They went home with happy memories of Key West those three women of a certain age in the front row. 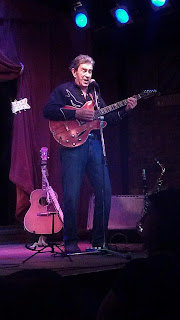 Then Island Alex cam on stage and danced sang and blew his brass, the consummate performer  having a ball on stage. 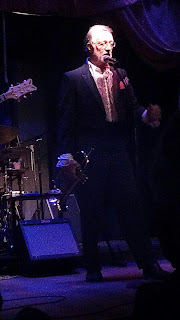 Finally the sole woman in the performance Camille Russo Toler stepped up the microphone to sign variations on Oh Susanna. And in effect it was less a night about old Key West and more a night of cowboy and folk songs, familiar  repertoire with just a few references to Bum Farto ( the tourists loved that one) That Fucking  Conch Train in the spirit of cowboys singing of the Iron Horse, Mel Fisher and of course abundant if unsurprising references to coconuts, palms, warm weather and driving to the end of the road. Familiar stuff but not really engaging if you already live here. 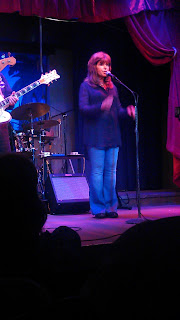 It was a fun night out but with the winter snowbird season over I would have enjoyed a little more topical references, inside jokes perhaps and just a little mockery of the foibles of daily life on the island.
Posted by Conchscooter at 12:00 AM No comments: