I am trying to record as much of the old Truman Waterfront as I can before the new buildings crowd in on these untroubled 34 acres of former Navy base. This is the rather splendid Eco Discovery center where you go to discover the secrets of the rather unusual sub-tropical flora and fauna that live in the Keys: 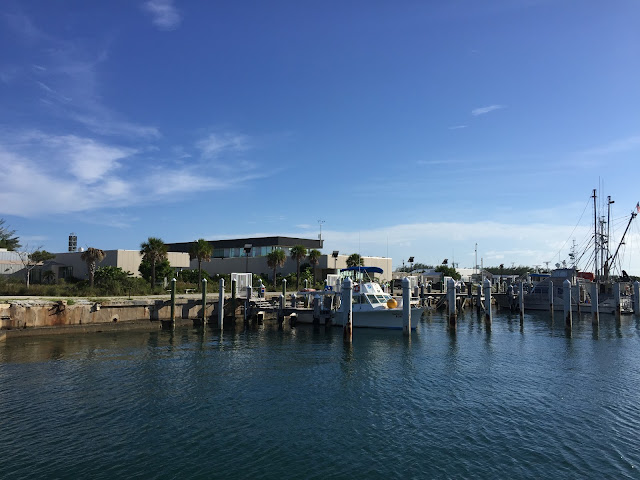 There is construction starting on the open space and now there are fences within fences...making a nonsense of out-of-date traffic signs. 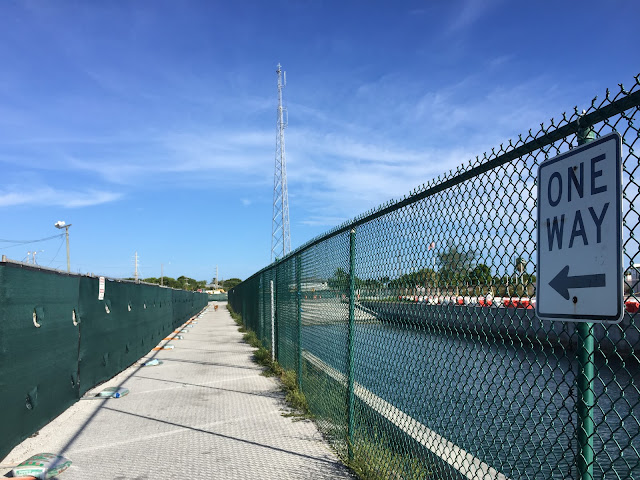 Rusty trotted off ahead of me and waited obediently while I caught up: 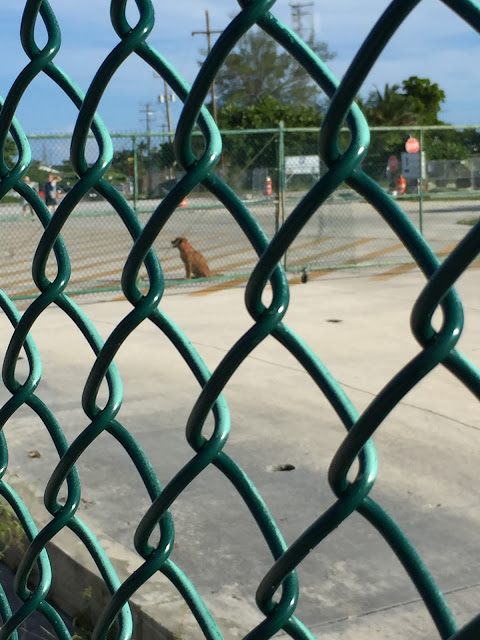 There is some effort to save some existing stuff which is decent of them. 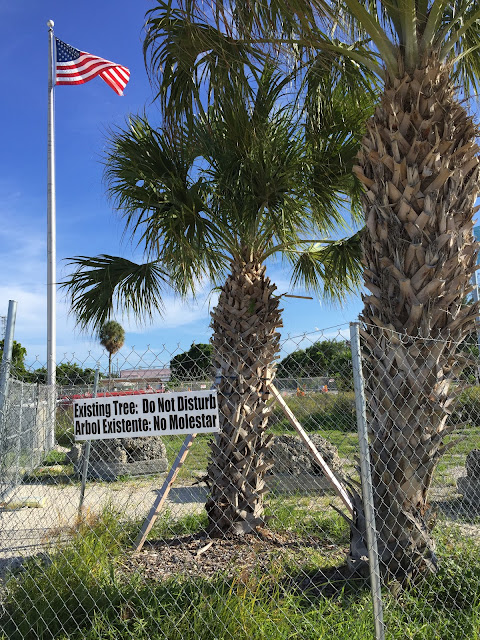 The old Coastguard ship Ingham is supposedly going to stay, unlike the Mohawk (which I thought as the more interesting ship) which was sent off for sinking to be a dive attraction off Sanibel Island. 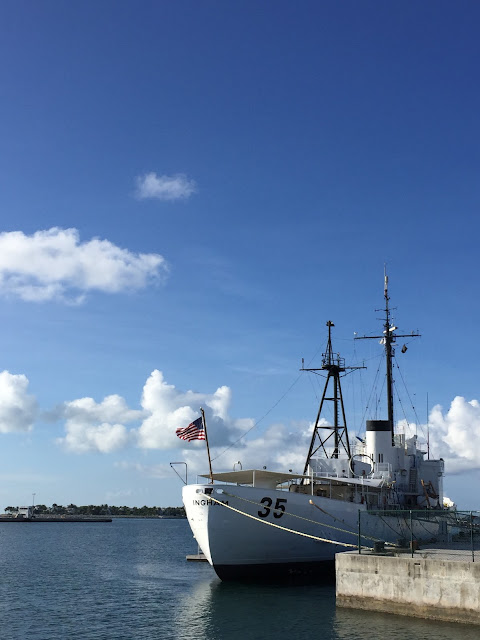 The Eco Discovery center is designed and built to take advantage of the sunshine and uses sod on the roof for temperature controil as well as displaying local vegetation outside. 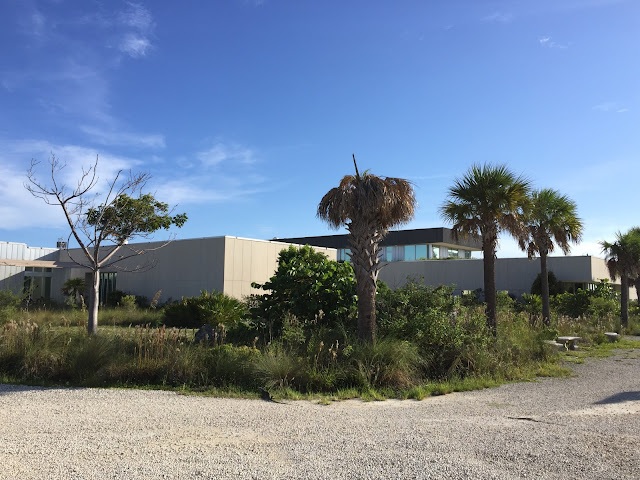 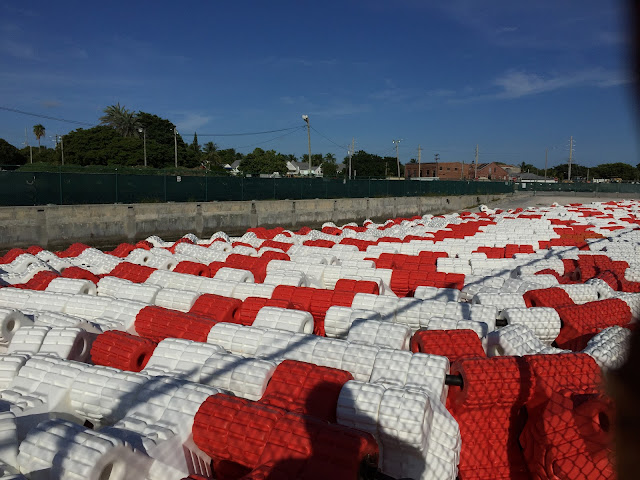 I took a fairly complete tour of the Dr Nancy Foster Eco Discovery Center in 2010 Link which is a reminder I should do it again: 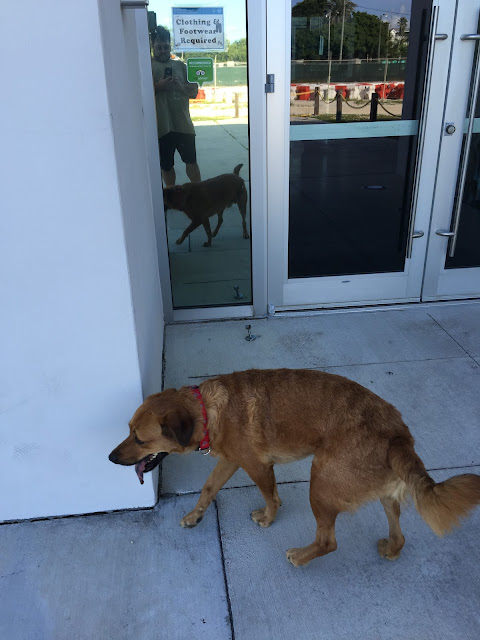 I enjoy the exterior of the building too with its fish cutouts and coral silhouettes: 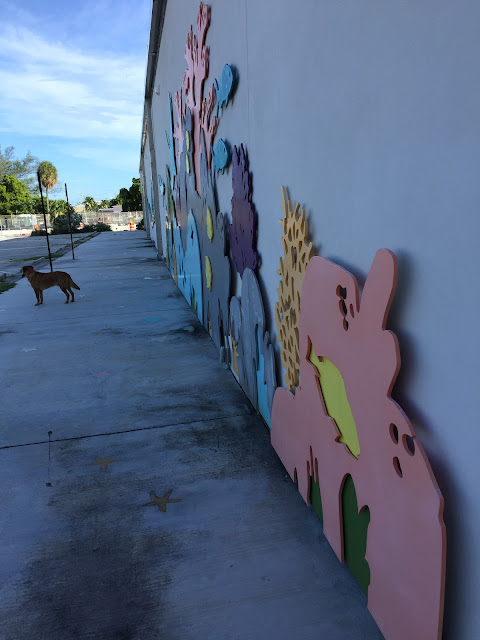 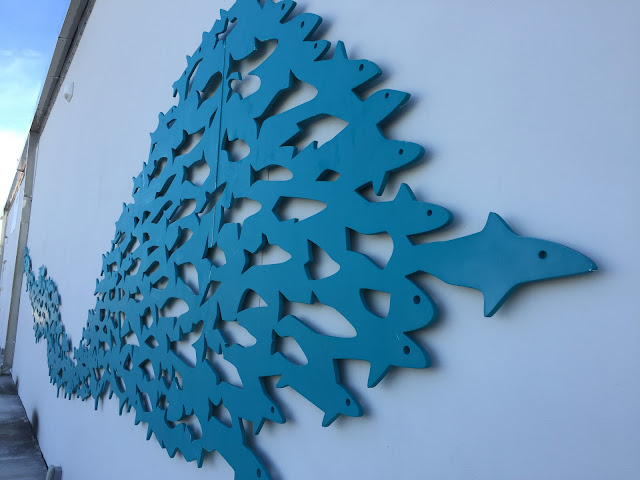 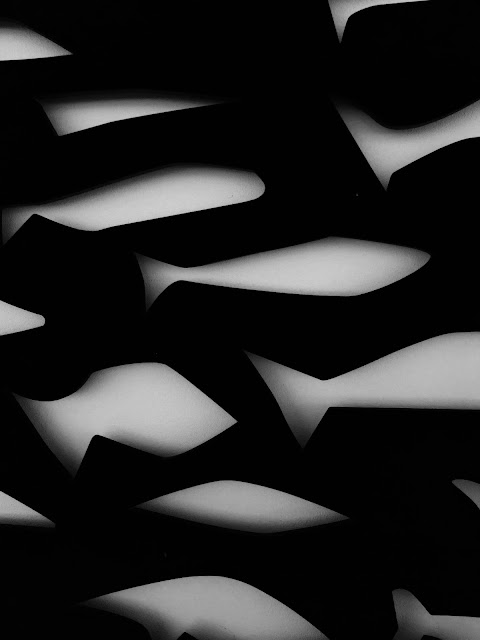 Mostly serving the unemployed, who I suppose need something uplifting to do in their abundant weekday free time. You'd think a museum type attraction could be open on a Sunday, but no luck. 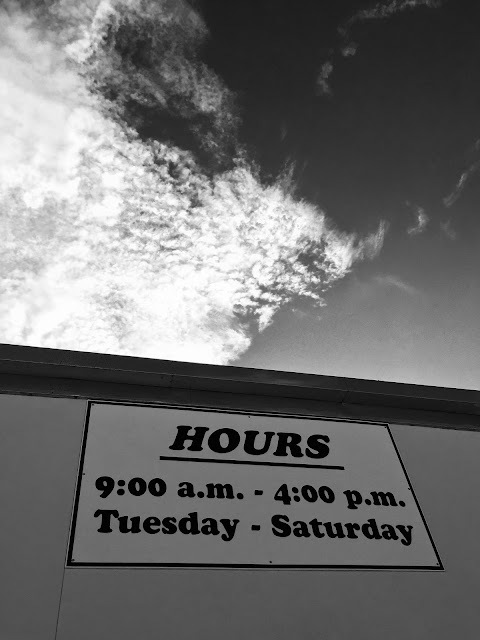 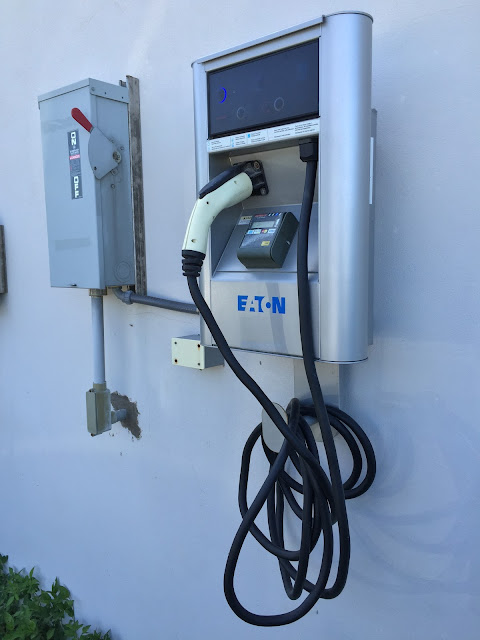 And ooh look a modern electric car plugged in. A Tesla. 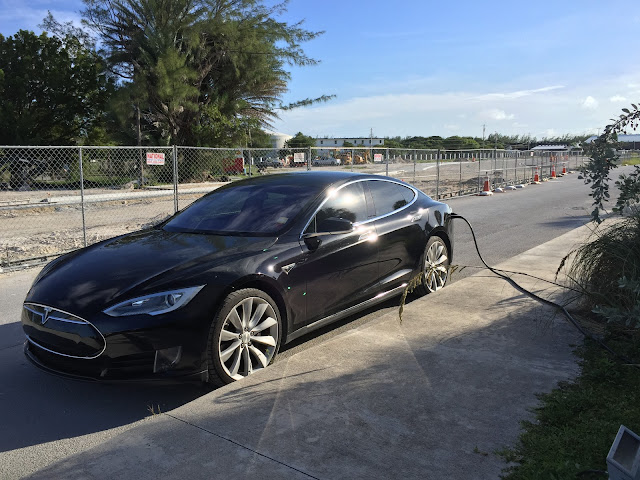 It was actually a nice spot to sit on the grass and watch people coming and going from Fort Zachary Taylor State Park in the distance. 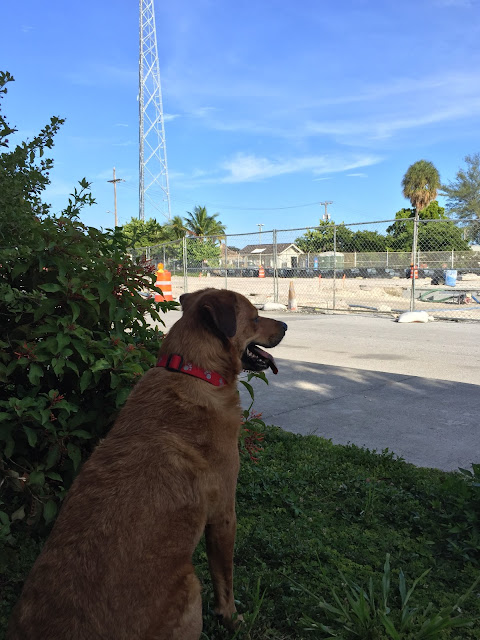 And then we slowly made our way back around the waterfront. 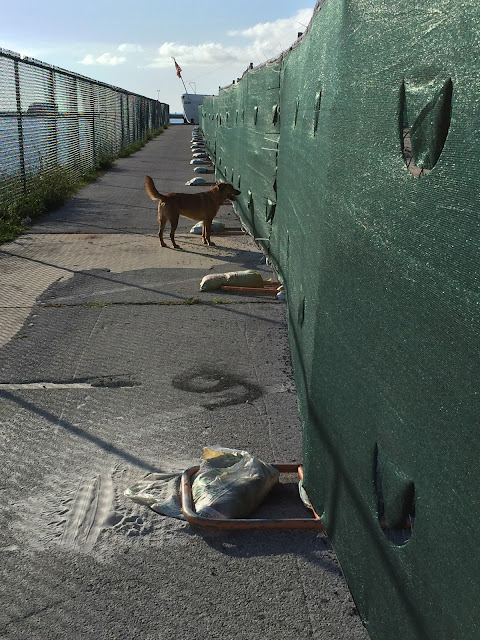 The construction currently underway will beautify and limit our ambling use of what has been for a long time simple open space. The Bermello Ajamil website, whence came this groundbreaking picture, describes the four million dollar design as the largest South Florida park construction plan currently under way.

Cheyenne used to like it too before the fencing and landscaping started. In this picture you can see the old Navy Guard hut with the sloping roof that guarded the entrance to the military part of the waterfront.: 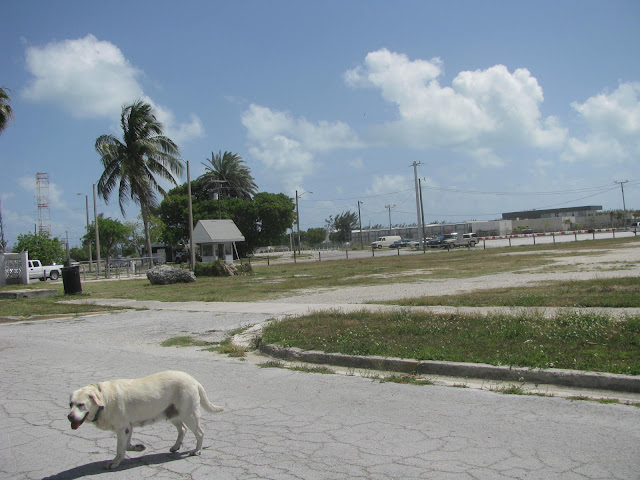 Now, in the area between Admiral's Cut where the waterfront nearly joins the Westin Hotel and the Ingham  ship museum this 3500 seat amphitheater will be built.  What traffic will be like in the lanes of Bahama Village as that many people come and go all at once doesn't bear thinking about.

The brave new plan also calls for this former Navy warehouse to become a restaurant and museum: 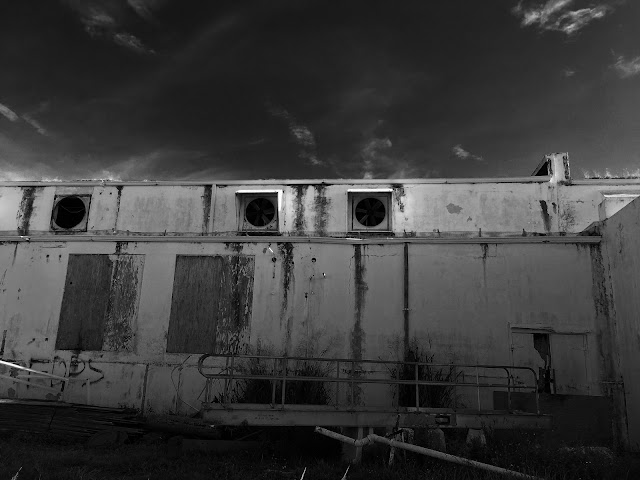 And there have been noises about dressing up this rather stark black and white thing in tropical turquoise. 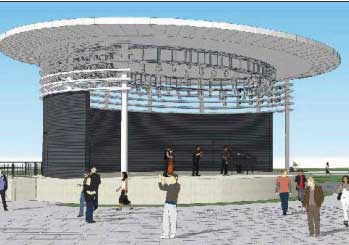 I will miss our visits, Rusty and I romping about in the grass, unhampered by plans and developments, money and rules. 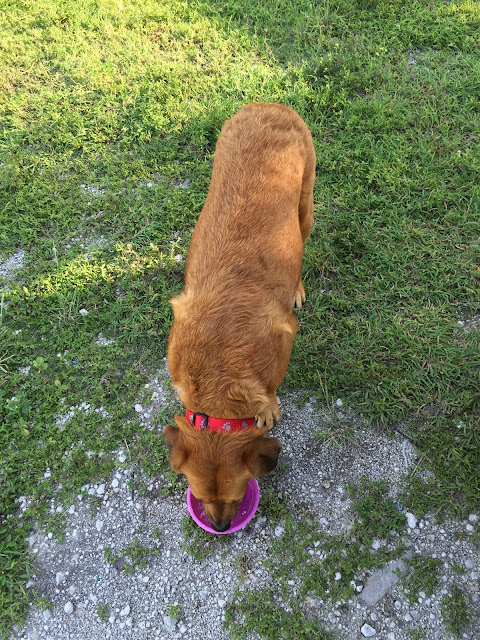 I try to take as much advantage of this place as I can, while I can. I've been doing that for years always waiting for  the hammer to drop and for construction to begin, Well, now it has.
Posted by Conchscooter at 12:00 AM 2 comments: