I have to restrain myself from making too many cemetery visits with my camera, because I am endlessly fascinated by Key West's burial ground. It is filled with history, quirky graves, and panoramas that closely resemble movie sets such are the atmospheric and splendid  tombs to be found in the cemetery. People naturally behave badly here as one is reminded upon entry: 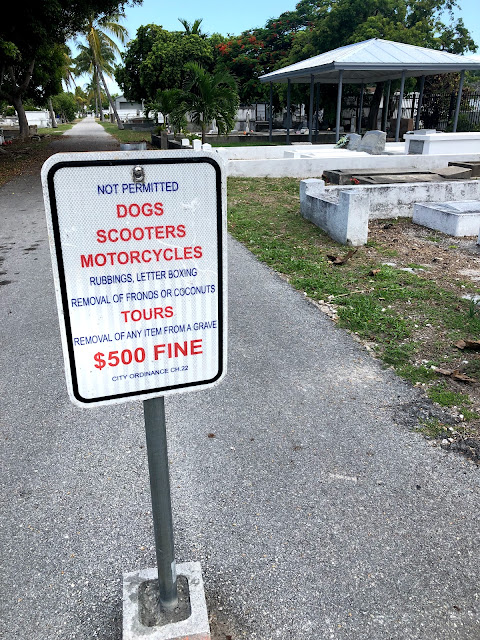 The cemetery is in the middle of Old Town and thanks to its own streets and trees and monuments it has  a park-like ambiance, so the cemetery naturally lends itself to a secondary role as a  bicycle short cut from Margaret to Frances Streets. 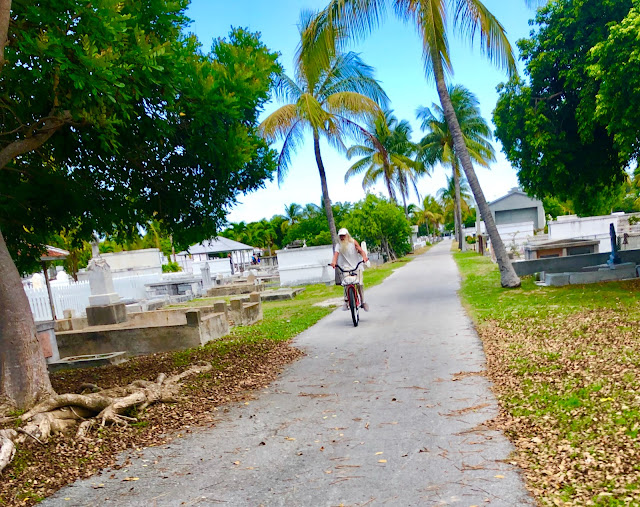 In order to try to keep myself focused I decided to try to limit myself to the Catholic section as I was entering on the Frances Street side. In a town filled with Cuban Catholics it is an oddity that there is a small Catholic corner in the cemetery with another corner dedicated to the Jewish diaspora which has had members in Key West since the city was chartered in 1828. The rest of the cemetery is everybody else I guess. 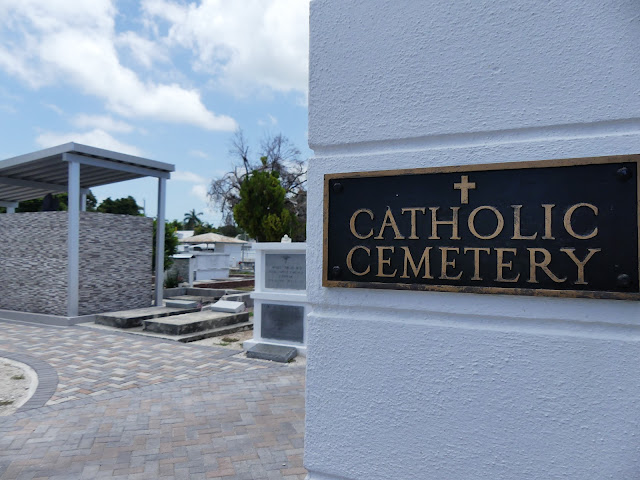 Some money has been spent in the Catholic section, nit surprising when you find out that the major construction family in the Keys has a mausoleum here. Angela Street runs down the north side of the cemetery, the far distance in the photo below.  That's where Catholic Lane is located, obviously named for this section of the cemetery. 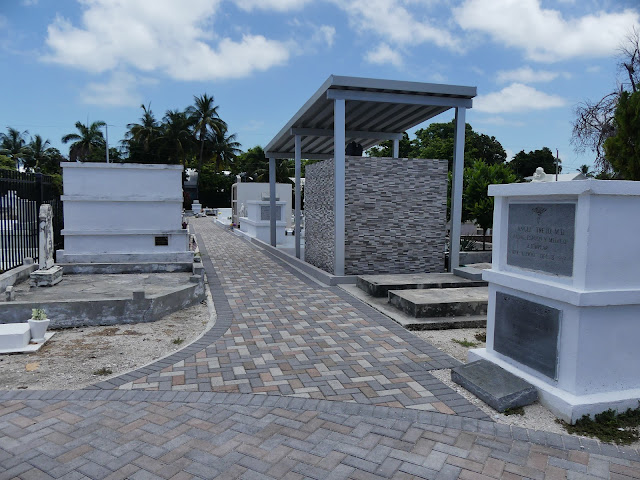 Everybody else gets buried out there: 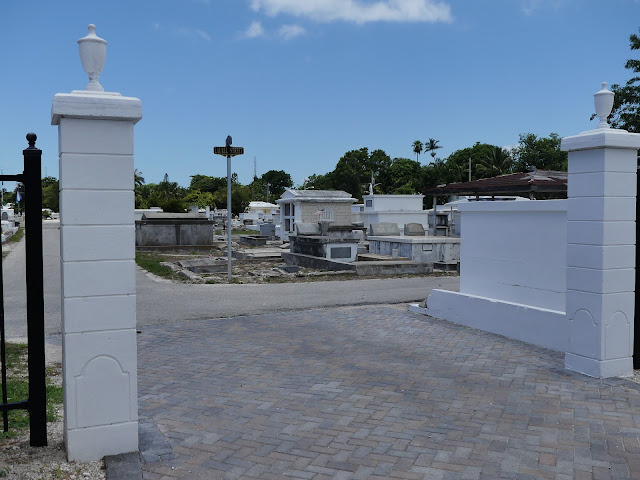 The reason the cemetery has this odd location on prime land in the middle of Old Town is due to the fact that the original cemetery at Higgs Beach was disrupted in the 19th century by a major hurricane and city residents were disturbed to find coffins and bodies pushed up out of the ground by the storm. So they decided to move the cemetery inland to protect its integrity in the face of future storms. 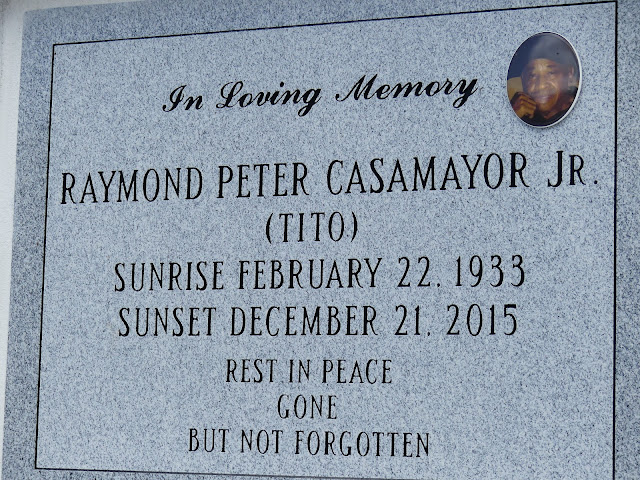 The cemetery was actually located on the edge of town, as Key West was in the 19th century. The city had a population of about 12,000 in those days and the cemetery was on the outer city limits. The rest of the island, beyond Division Street (now Truman Avenue) was open space, including some dairy farms and the like, divided as the street name implied from the urban area. 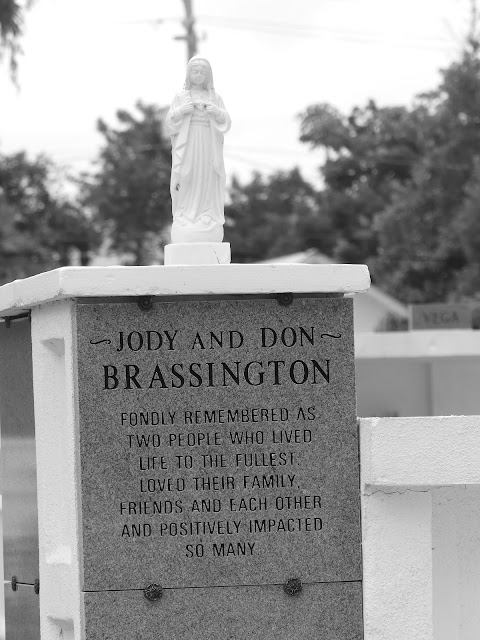 This business of the dead being resurrected by Hurricanes has not unfortunately abated. Hurricane Irma, among the many indignities inflicted upon us pulled a coffin out of the ground in Big Pine, tore the lid off and set the unfortunate corpse inside upon one last journey through the island, as reported by the Miami Herald which I quote here to make sure I am not thought to be exaggerating:
After Hurricane Irma hit Big Pine Key, a casket from a nearby cemetery wound up lifted by storm surge across the Overseas Highway, winding up along a neighborhood street. The top broke open, exposing the remains of a man in a baby blue suit. The casket, one of a handful displaced statewide by Irma, is now back in its proper resting place. 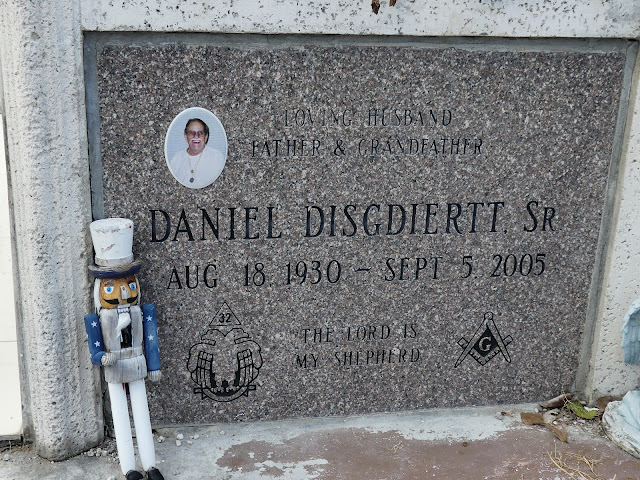 I find the tombs in the Key West cemetery always worth a  pause and some contemplation. Elsewhere on this page I have recorded various well known and less well known graves as a look in the search box at the top left hand corner of this page will show if you want more pictures...even more pictures. 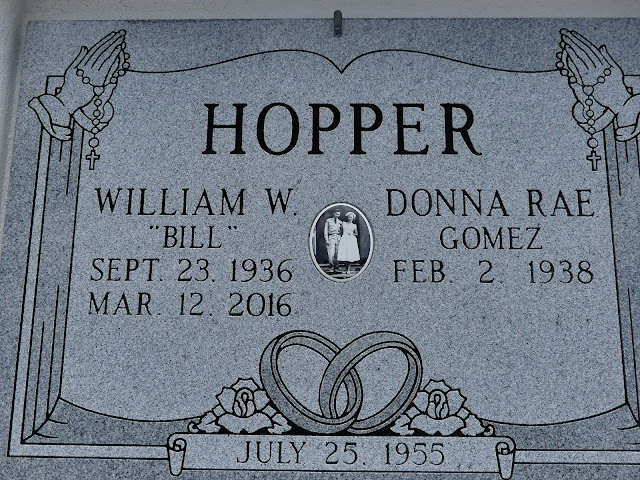 There is I believe more than one tomb dedicated to animals but this one I found among the Catholics. I lost my faith pretty much when my parish priest told me dogs have no souls, can't go to heaven and aren't allowed in church. Things seem to be changing on that front at least: 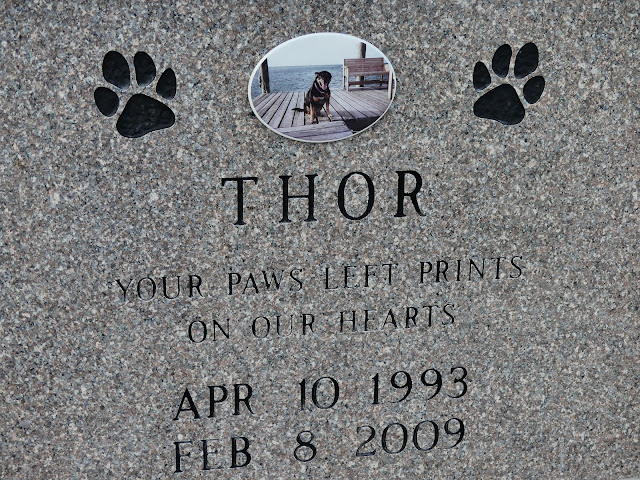 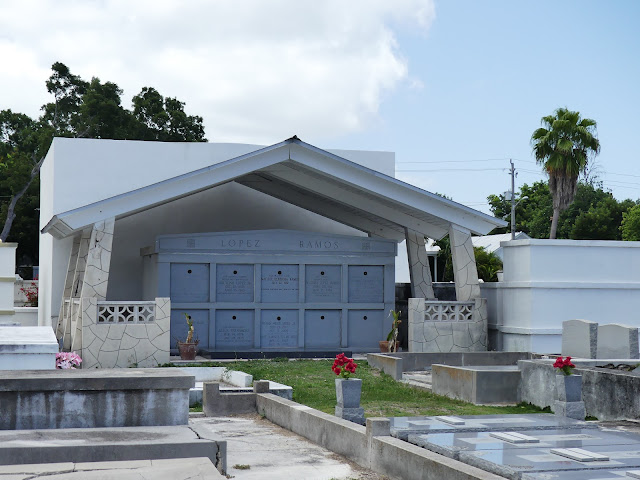 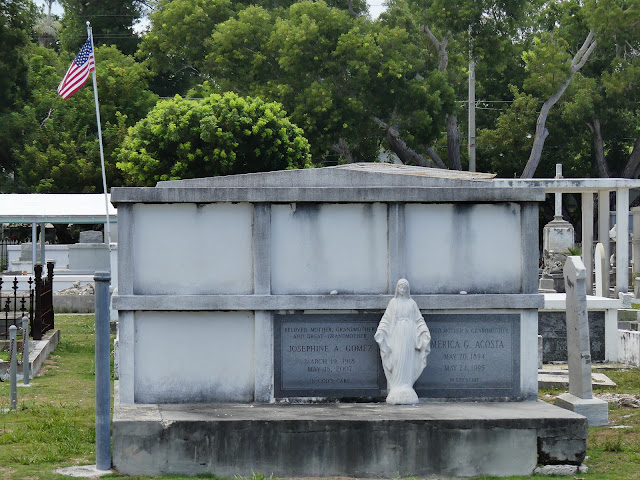 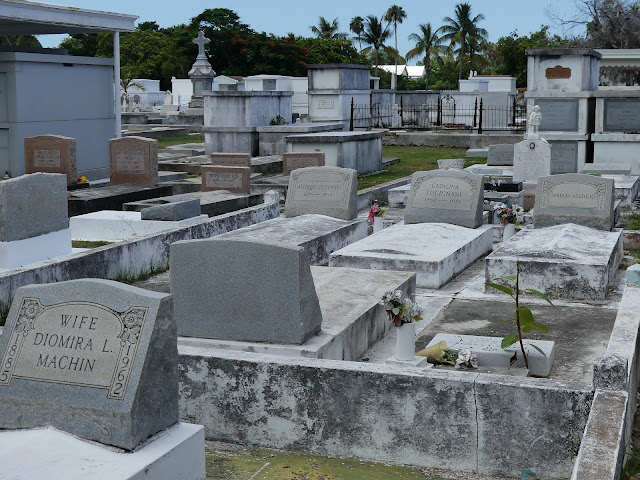 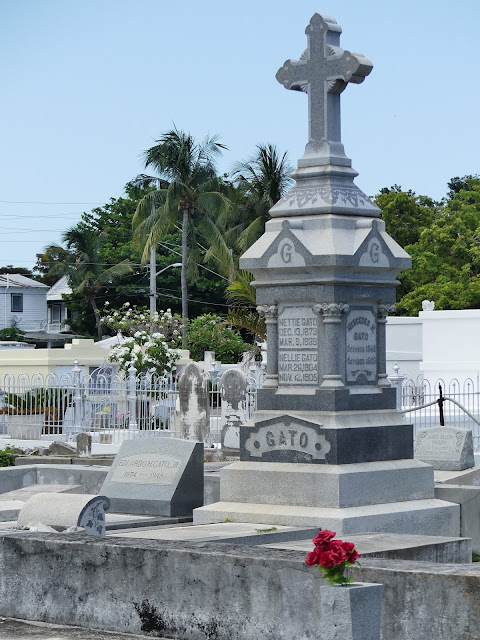 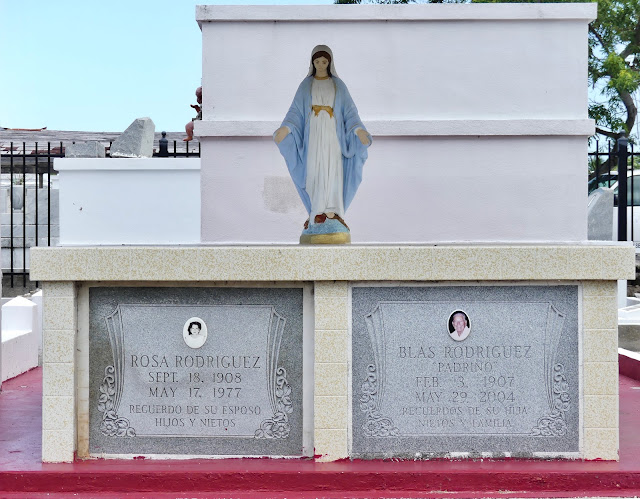 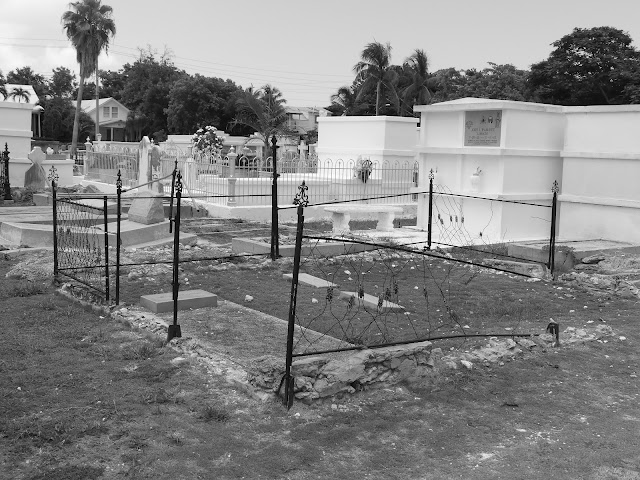 The Toppino family got the contract to lay the cement for Flagler's railroad at the beginning of the 20th century and that lucrative monopoly laid the foundation also for the family fortune in the Keys.Their red and white cement trucks are out and about on the roads today. 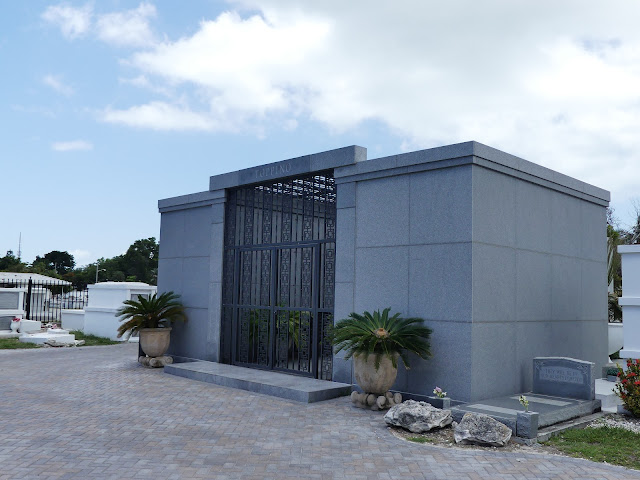 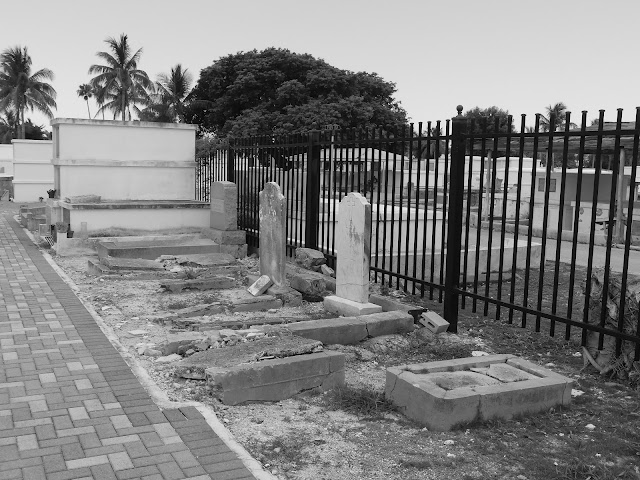 This  tomb has got massive amounts of interest over the years but hopefully that will die down. 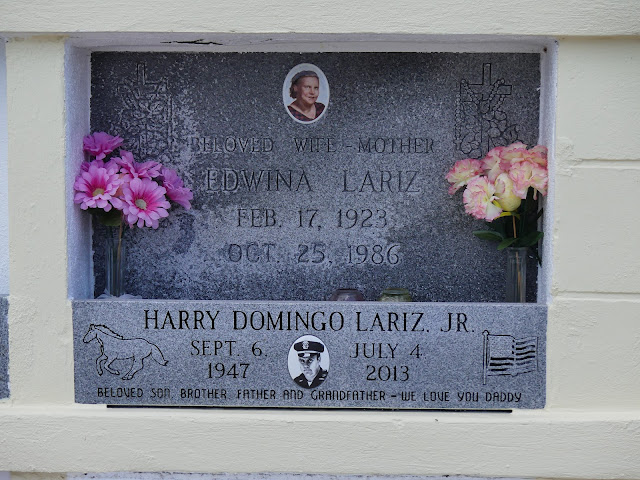 It used to express her fondness for a particular singer though I doubt any but the oldest among us now will remember Julio Iglesias ( the photo below I took six years ago) and his place on the tomb has been taken by another family member as shown above. 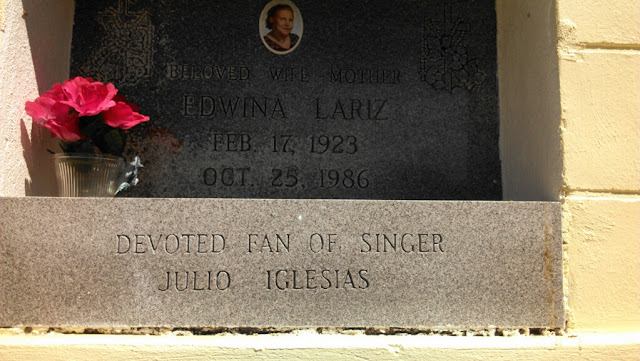 It's hot under the summer sun in the cemetery but I always a enjoy a walk there thinking about those who have gone before and enjoying the mementos family members leave behind. 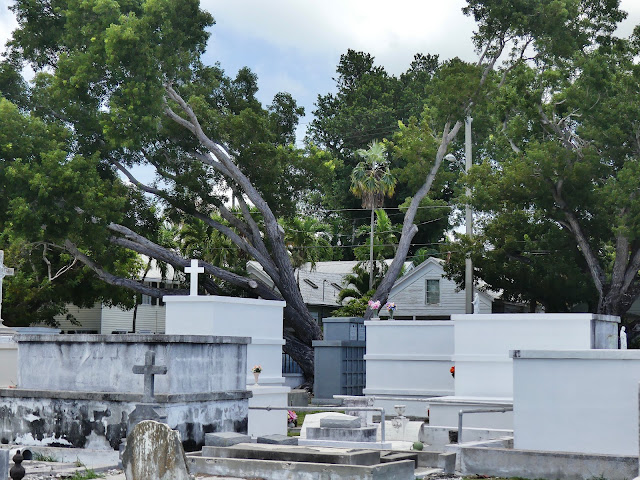