Empire State South did not disappoint my wife had was curious to try a restaurant that had made headlines in her reading lists. Run by a Canadian émigré Hugh Acheson has also appeared on television, the medium that provokes comment. So rather than speculate we made Atlanta our goal after socially isolated Thanksgiving plans in Pensacola fell apart. 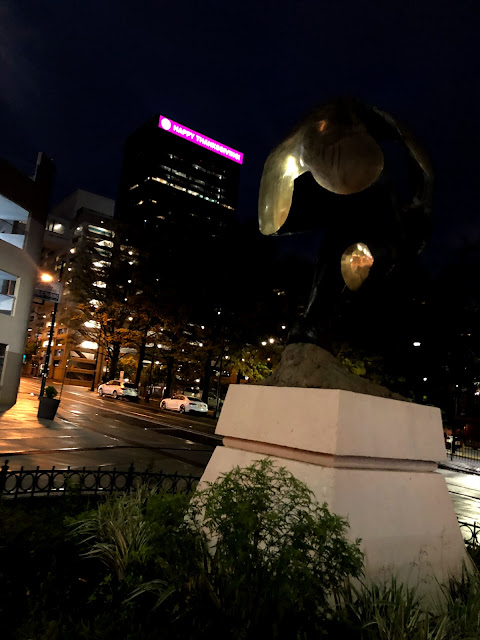 I am a man of a feeble palate and I could blame my many years spent at Hogwarts, typical English boarding schools with dubious menus, but I suspect it is simply a defect in my genes. Nevertheless we ate oddly flavorful fried rice, stewed chicken pieces on toast, trout and of course every schoolboy's favorite (where I grew up): trifle in a mason jar. Because of things being the way they are I had to drive through the rain to collect the food in a  touchless transaction which we ate in our bright and cheerful hotel room in a celebration only vaguely reminiscent of Thanksgiving which we celebrated more properly in the woods later. The next morning dawned cool and clear, after the rain and naturally my little brown terrorist was keen to see the world outside. 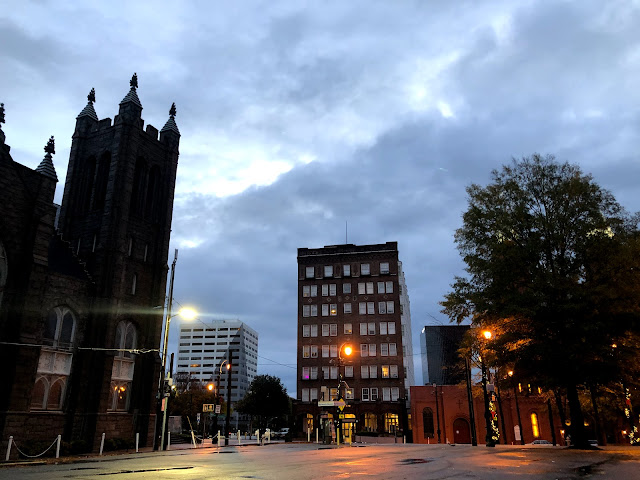 Leash? Check. Umbrella? Check. Winter vest? Check. Irritation? Left at the pre-dawn door. I actually also left my camera behind which ended up being a stupid choice as the rain stopped the instant I stepped out and to my irritation I had to use my iPhone 8 which for me is not an an enjoyable photographic tool. I know phones are improving by leaps and bounds but I have fun with buttons and dials and making things look the way I want them to look and phones have an unnerving ability to render everything the exact way we see the world. And yes I did find the bottle of hand sanitizer on the rental scooter quite fascinating. 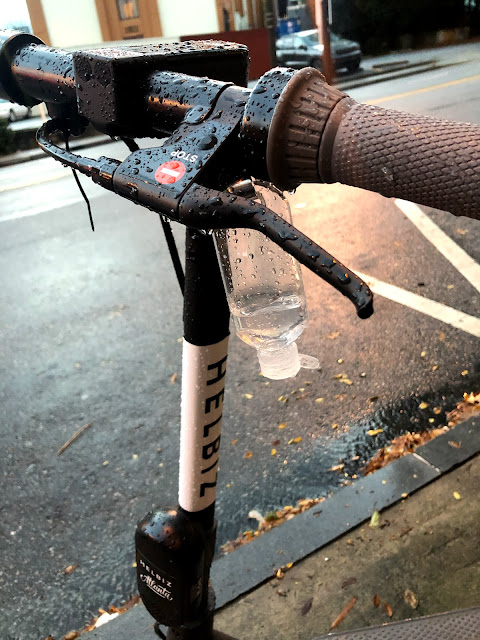 The city was empty of course, like a slow Sunday morning even though it was Thursday, Turkey Day, and we walked an Atlanta fast asleep. 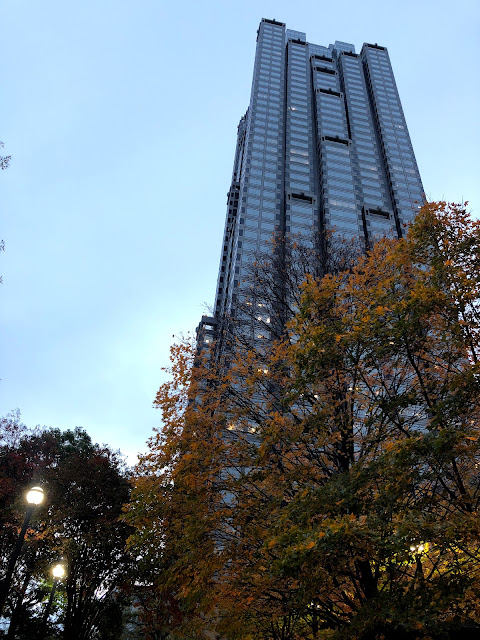 I had no idea what I was looking at when the name of the Italian poet appeared through the sparse tree cover. Wikipedia to the rescue! It appears the Scottish industrialist has left his mark here as well, which is hardly surprising.

The Carnegie Education Pavilion, more often known as the Carnegie Monument, is a marble Beaux-Arts monument located in Atlanta, Georgia. The pavilion was constructed in 1996 from the exterior façade of the Carnegie Library, named after Andrew Carnegie. The monument pays homage to the legacy of Carnegie by serving as a monument to higher education in Atlanta, with the seals of nine local area colleges and universities embedded in the floor of the monument. The monument was commissioned in 1996 by the Corporation for Olympic Development in Atlanta and designed by Henri Jova. The pavilion is located in Downtown's Hardy Ivy Park, at the curve in Peachtree Street where it diverges with West Peachtree Street. The monument's inscription reads: "The Advancement of Learning." It also features the inscriptions of the names of three famous Western poets "Dante", "Milton", and "Aesop", in addition to the library's namesake, "Carnegie". 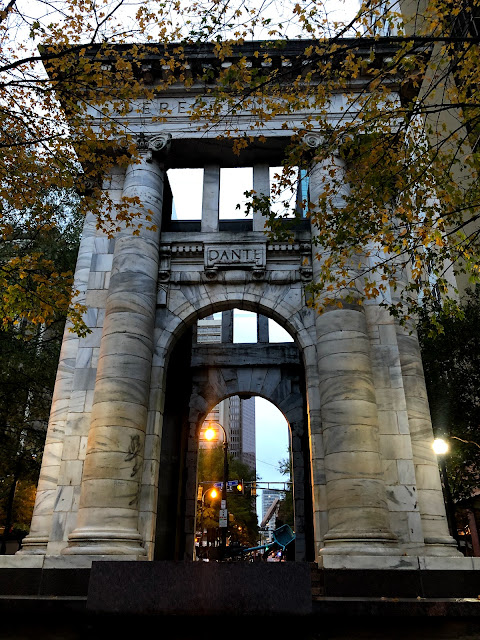 I guess I walked around a bit with my head in the air, noticing the tall leading lines pointing to the sky and in among those leading lines a few closed circuit cameras monitoring my movements. I wonder who gets paid to watch, my jaded 911 view is that the footage is only ever viewed if something actually happens. I love Rusty but I can't imagine watching him being walked is of much interest to a bored insecurity guard. 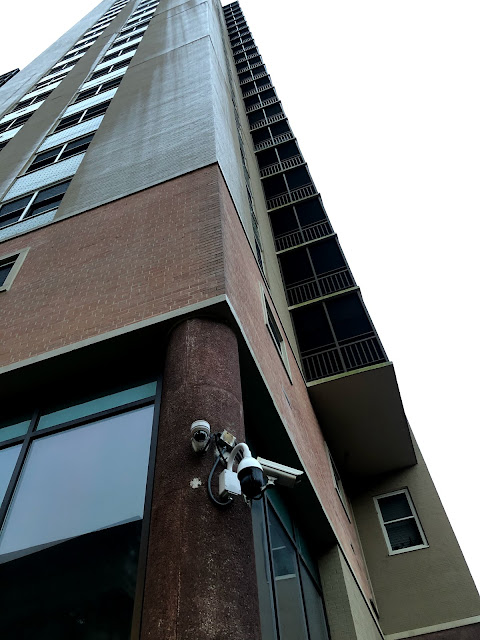 Georgia Peaches. They make it seems as though this is all there is in the Peach Tree State. 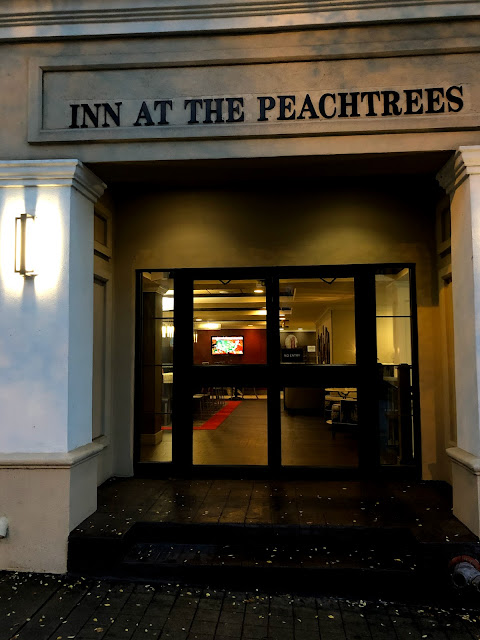 Florida is the sunshine state and when we finally got to drive south again the dark cloudy skies indeed did open up over Valdosta and gave way to 80 degrees and sunshine at the Florida Stateline. I have found that to be true over the decades and even now I think of those huddled homeless figures chilled in the granite caverns of downtown Atlanta. 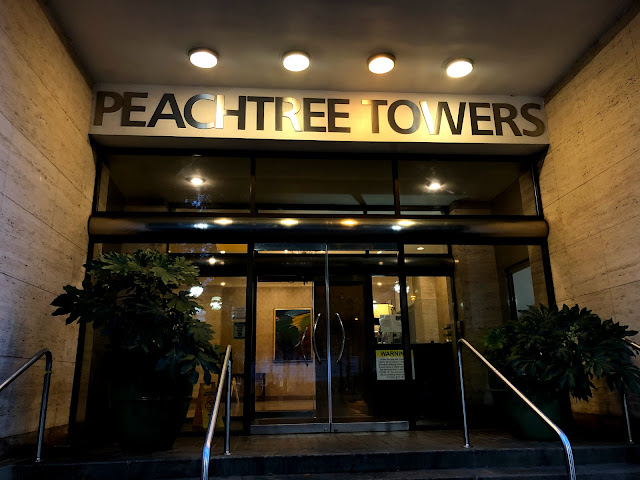 I was missing my camera but I found shapes and lights and angles to capture my interest. 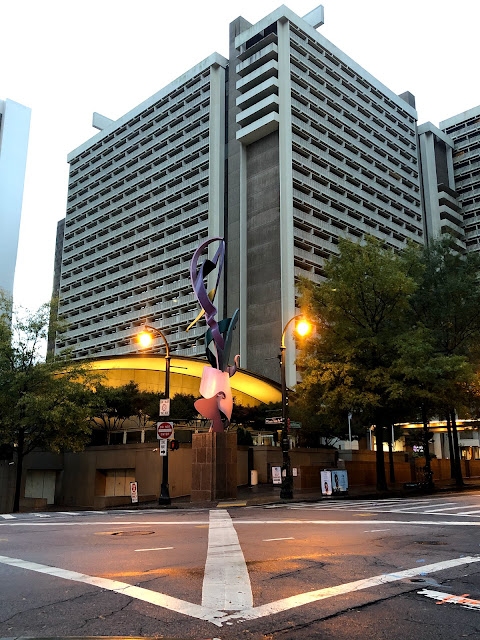 "A vision of w hotels." I have no idea what that means and I frankly couldn't be bothered to Google one more corporate slogan. Now you know, feel free to have a go if you want to decipher some fresh marketing gobbledygook. It juts looked like another monumental hotel with funny random lighting. 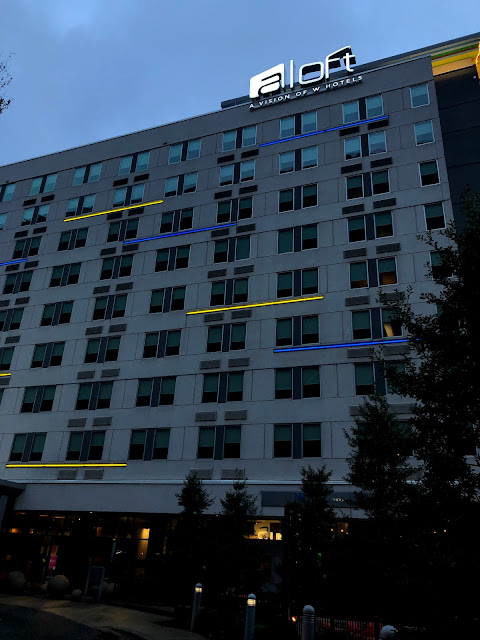 Rusty did not like these scooters dumped on the sidewalks of steep Atlanta streets. They have apps apparently and each brand offers a quick easy ride, pick it up and abandon it as needed. The wheels are locked when not in use and the battery makes them heavy. I know this as their random parking gave my differently abled dog fits and at one point he spotted a scooter across the wooded sidewalk and refused to advance. I unleashed him and he sat and nervously watched me approach the ambush, only running up to me after I showed him the scooter was harmless and quite possibly deceased as it did not leap out at me as I walked past. 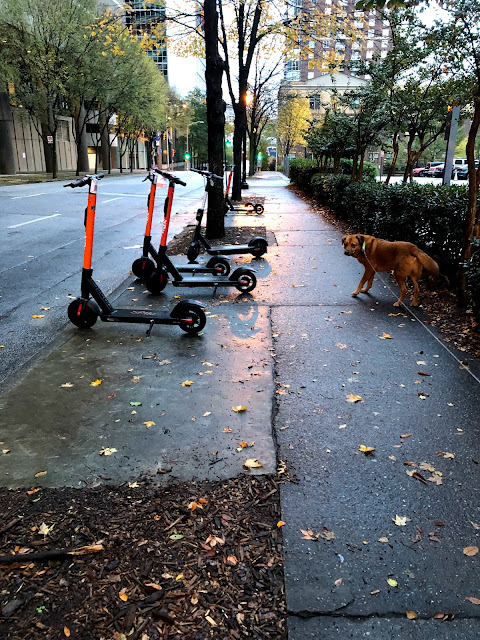 The pile of fake books on the other hand didn't bother him a bit. I fear my dog may be illiterate. 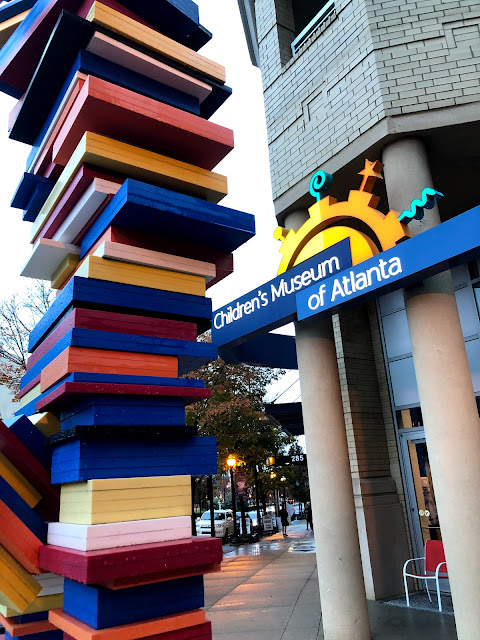 I remember when Atlanta was defined by Cocoa Cola and CNN. I actually thought of applying to CNN for a job after a  friend was accepted as a news intern. She loved Atlanta in 1990 but common sense struck me in the head after I realized I despised TV, so I went sailing to the Bahamas instead. 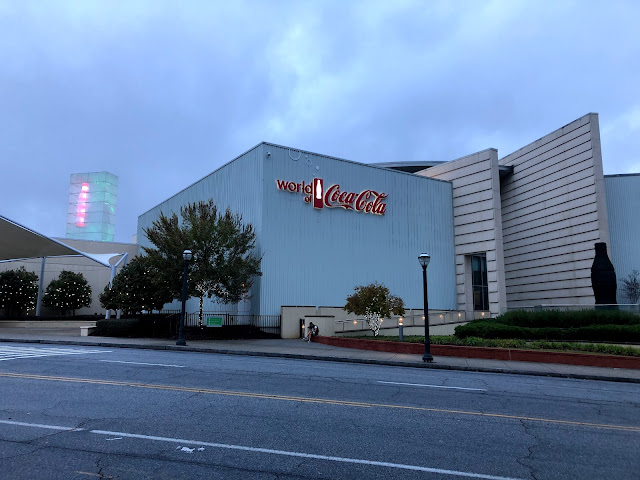 I-75 South, home of anti-abortion billboards, confederate battle flags and strip club advertising, all pointing towards Florida and sunshine and the warm embrace of oranges and unreality and alligators. Home! 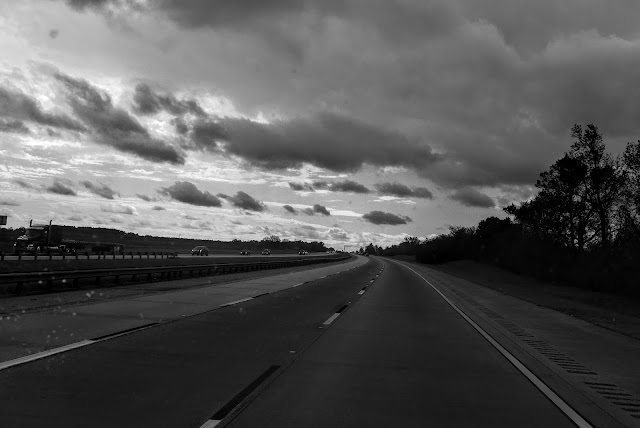