Here it is, a lovely beach scene in colorful Key West... a bandstand at Higgs Beach, the vacation dream of many a snowbound northerner, sand cool under the early morning sun which will bring October's daytime temperature close to ninety degrees. 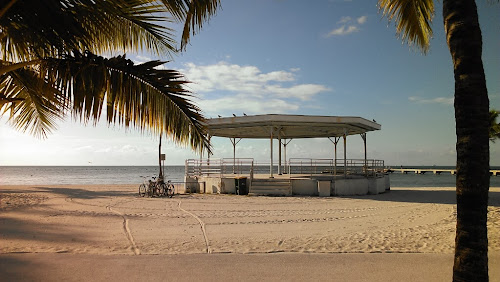 The other bandstand at this county beach within the city is much more active.  The bandstand makes an alfresco area for the residentially challenged to gather and plan their busy days. 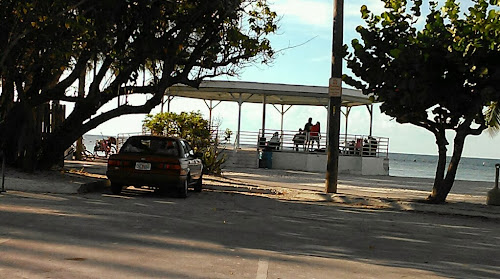 ﻿
Fresh arrivals from the Temporary Overnight Shelter on Stock Island which closes in the morning, show up at Higgs beach after a pleasant ride along sunny Smathers Beach. 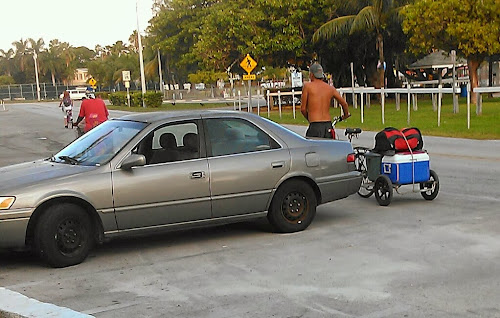 And you might ask, who wouldn't want to hang out at Higgs Beach on a lovely Fall morning. The problem is the city is in a bit of a ferment about what to do with a number of residents who prefer outdoor living. And many more will arrive as it gets cold Up North. 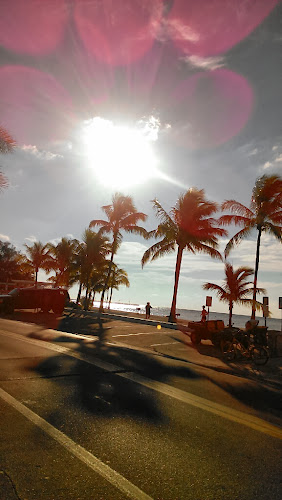 Housing in Key West is expensive, certainly by Florida standards, but that's hardly surprising on small islands discovered by people with money who like to own second homes down here for the same reason the homeless show up in winter. And things being the way they are foreclosed homes, disputed homes and homes otherwise not occupied enjoy the supreme irony of sitting useless in a  town desperately short of affordable housing stock. I think the street number on this one could be 730. 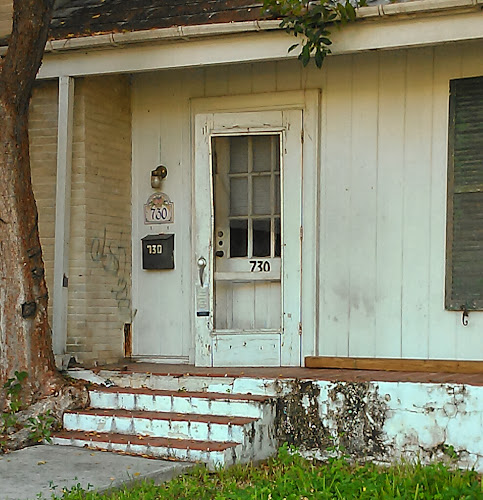 The homeless issue came to the forefront after the Mayor decided that after he sorted out the need for a new city hall to be built at Glynn Archer School, what the city needed was a half way house for the homeless to get them reinserted to society. The city hall plan was controversial but the homeless facility to be sited at the Easter Seals building on College Road, on Stock Island got backs up across the island. While Mayor Cates could be described as resilient, or stubborn, depending on your approval rating of the Glynn Archer project (I like it) it seems like the rehab center on College Road may be a dead duck. Fundamentally the homeless problem in Key West is about tourism. Who wants to spend 500 bucks a night just to sleep and trip over a snoring drunk on the sidewalk outside? It just isn't  on. 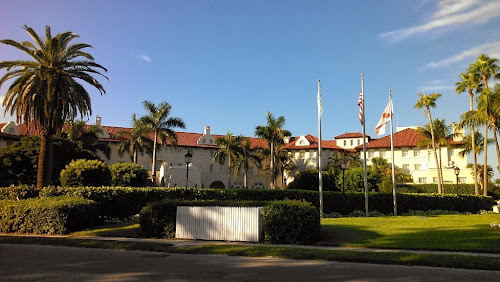 The homeless problem is going to get worse pretty soon. In order to settle a lawsuit with some severely offended high end apartment owners nearby, the temporary shelter will close down. The Sheriff, eyeing his next election, announced he wanted it gone from his backyard so that's that pretty much. What comes next is a  big question. The old timers who managed to create the shelter, Steve Braddock homeless rehab advocate, John  Jones gnarly former assistant city manager and former Sheriff Rick Roth all worked out a plan to comply with the law and clear homeless from city streets. 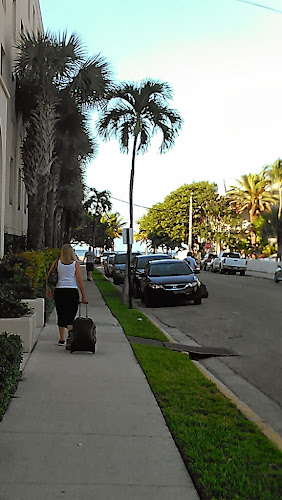 Well, that coalition of the motivated is gone and now an unknown number of homeless men and women, perhaps 200 or perhaps 2,000 depending on who you ask, will have nowhere to sleep unless the city commission comes up with a plan, and so far, in  a fair imitation of Congress the city commission has reached the squabbling stage with no sign of a plan ahead. Meanwhile the tourists keep coming because Key West, cruise ships and all, is a desirable destination. Look at those cabs lined up waiting for trade from Casa Marina Resort. 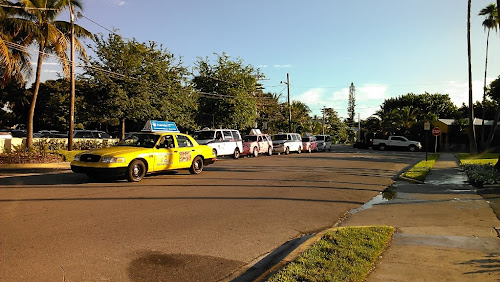 The issue is complicated by a Court ruling that  requires local jurisdictions to make available "safe zones" where humans can sleep, before the jurisdictions can arrest people for vagrancy. In other words, when the temporary Shelter closes the  law is that  the homeless can't be moved along. Unless a new solution offering a safe place to sleep is found. 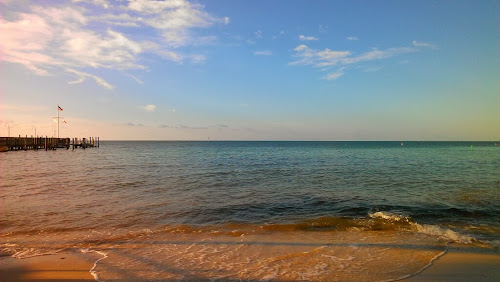 People often ask if Key West is safe as though there are pockets of  evil doers lurking in  dark corners of  terrible places. Key West isn't completely immune to violence God knows, and  if you combine alcohol with a soured relationship (of any sort, romantic or not) the potential for people to get stupid and hit each other is there. However violence between strangers is rare, again, nit unheard of but very rare. If you want to stay safe in Key West stay sober and sensible, don't flash valuables and walk at your pleasure. Like this woman out exercising: 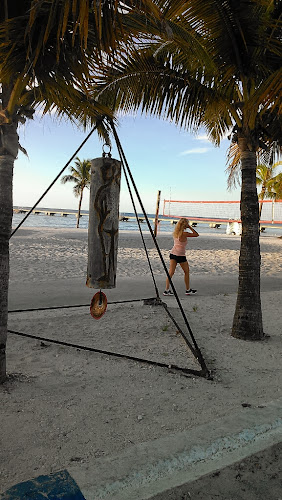 This dude may not be visually appealing in our youth and wrinkle free culture but he looked pretty harmless, even to Cheyenne. The homeless know they get no leeway from the cops and even the aggressive ones don't want to mess with people whose word will be believed over their own. So for the most part their dramas and disputes occur within their own street culture. Most of the irritation with the homeless comes down to appearances. 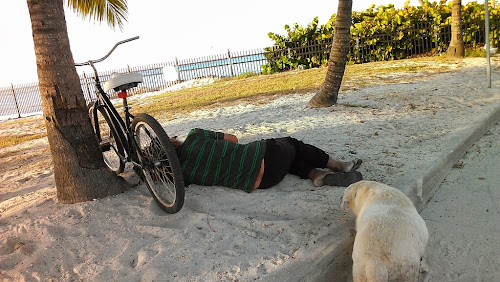 Indubitably it gets irritating to have a recreational space used as a dormitory, even by the self contained. However park use during daylight hours is open to all no matter how disheveled and smelly and that too creates irritation among the well heeled. 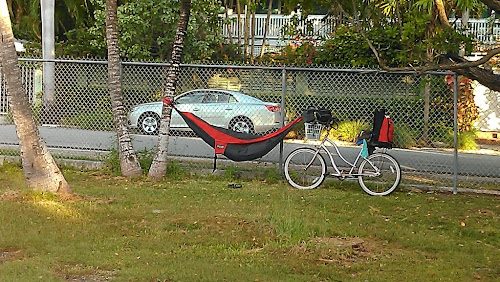 In an effort to move the homeless along from the picnic tables at Higgs beach they turned that area into a  playground requiring all adult users to be accompanied by a child. Brilliant move but now for some reason the playground is closed (the old Astro Park across the street is still open). 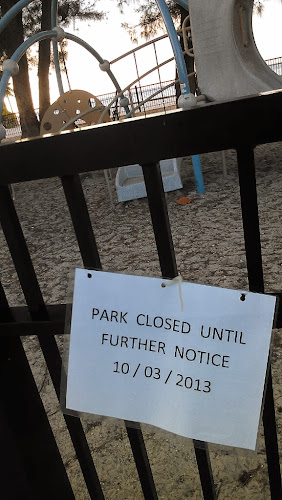 The homeless issue on the streets of key west gets irritating to people who rent or own expensive homes. I don't know how much of the theft and pilfering downtown is attributable to the homeless but they are an eyesore and panhandling got so bad the city created two begging zones to enable the outlawing of panhandling across Old Town and particularly Duval Street. But as you can see life this close to the street  requires a certain  level of awareness (despite the bad grammar): 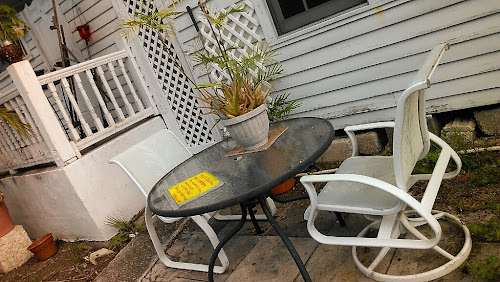 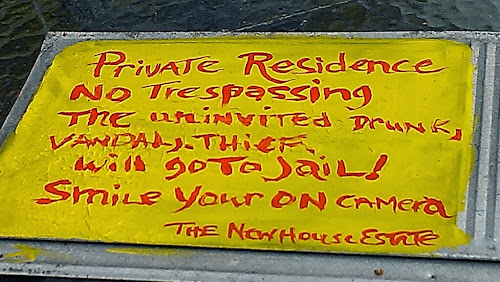 And now we have the big crowds of tourists coming for Fantasy Fest and Goombay and a week of parties before the big parade and all the festivities to bring people to town. The  festivities will all undoubtedly go swimmingly but the underlying issue will still be here as winter closes in and the highly demanding high rent snowbirds show up and don't want to get used to oiks on the streets. 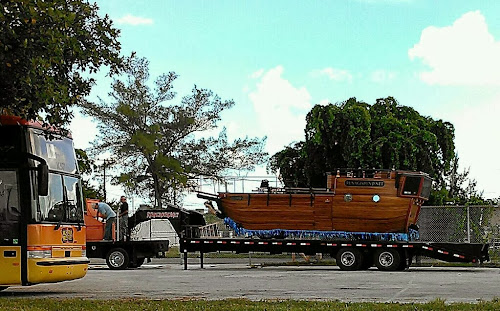 Oh well, if Congress can bury their heads in the sand about big issues maybe the same will work with a little one. Party on!