I really quite liked this Automated Teller Machine when I strolled by. How perfect I thought: "Welcome To Key West; Get Cash." That about sums it up really. 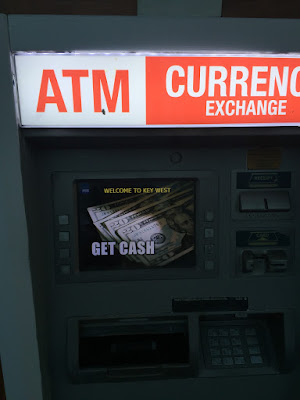 Not true, there are bargains if you know where to look and knowing where to look depends in large measure on knowing who to point you to, in order to look in the right place. Luckily I am overloaded with spare pink Crocs at the moment. I'm not sure why they make them in men's sizes as they are so hard to sell they practically give them away, lucky me. 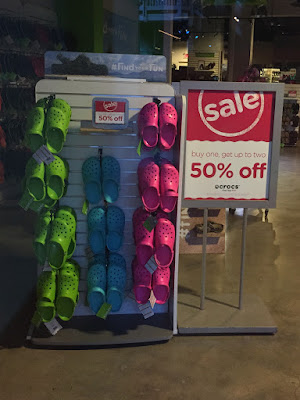 An incautious scooter renter managed to get park and get a ticket, $25 or even $35 depending on the mistake...This in a town where free parking for motorcycles and scooters is everywhere. Welcome to Key West, get cash. Pay off the little white slip of paper wedged into the speedometer. 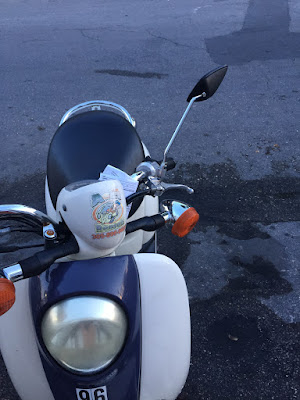 I missed the Fantasy Fest party last weekend when I was working. Had I not been working I'd probably have missed it anyway. The idea is to raise money for assorted events leading up to Fantasy Fest week and whichever people get the most money become King and Queen. Monies raised go to AIDS Help which gives the whole Nudity Fest a veneer of respectability. Fantasy Fest is another of those bones of contention in a town that loves a drag down debate from time to time. The problem for Fantasy Fest opponents is that the grotesque dress down show brings in tons of money and in Key West money always talks. Besides which, looking at the pictures in the paper Fantasy Fest remains firmly in the hands and for the entertainment of a mostly older crowd. Which leads the ageists in our midst to assume that older people shouldn't strip however as usual the older people have the money and the buff young things don't. This means there is a natural, progressive and apparently unstoppable drive to see older participants in the Fantasy Fest week at the end of October. 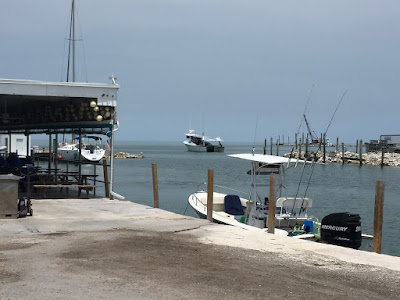 This year the Fantasy Fest Grand Parade falls directly on Halloween and the city wants families to take trick or treating outings to the night of All Saints, November 1st. That suggestion has raised the predictably combative opponents and once again crass nude commercialism butts heads with the families of Key West. I am no great fan of Fantasy Fest but to me it's just another messed up week(end) similar to but more intense than Lobster Fest, Bike Week,Mini Season, and whatever other money spinning events they have conspired to create. For a town that used to die, economically, every summer, Key West has got the money flow figured out these days. 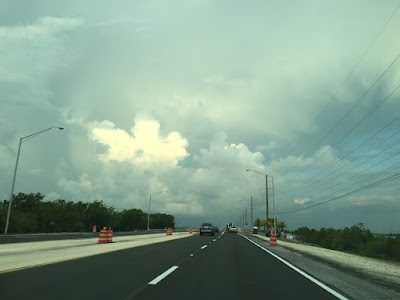 Now it is September and the seven weeks between now and Fantasy Fest will fly by before people start to pour in, in droves. Everything now starts to take on the calendar divide of "before" and "after" the Grand Event. And the last week of October will be a week when not much gets done in Key West when the city pretty much gives up trying to function. In a way its a rather nice evocation of big local holidays in the medieval past when cities would shut up shop to celebrate a patron saint or some such local festivity. The fact that Key West in the Age of Internet is willing to shut down for a few days, totally ignoring the outside world, is rather quaint I find. I wish it wasn't to honor people getting shit faced, taking their clothes off and acting stupid, but there it is. We must make the most of it and commiserate the end of Daylight time and the start of short winter days and no more swimming. Winter comes after Fantasy Fest.

Tomorrow's essay will explain in detail my business project which is supposed to come to market, fingers crossed, by Thanksgiving. I apologize for the delay and the toll it has taken on my ability to devote the full measure of my attention to this page. There has been a reason for that and I believe it will prove to have been worthwhile. Fingers crossed, as always.