It was 75 degrees at the Blue Hole this morning when Cheyenne and I went for our morning walk. 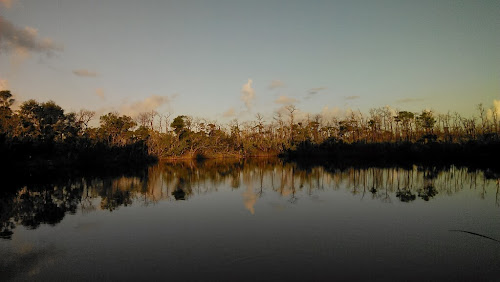 For at least the next week I am back on nights as my Trainee does some specialized training with my boss so I have that to look forward to, and even though she doesn't know it Cheyenne will enjoy a return to our regular schedule. I am glad to train as I want more people to get this great job I have, but it is much more stressful training by day than working by night with my buddies. 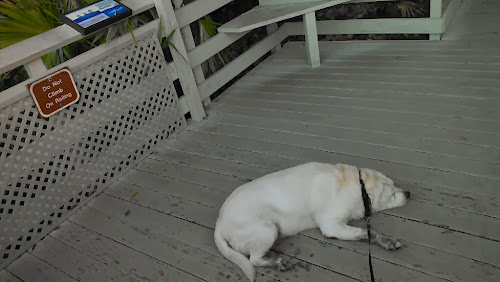 I was idly wondering what the forecast this week of night work might look like and I saw a horrible picture. Well bugger. Unless you enjoy snow which I don't, I looked at this and read that four people died of hypothermia in San Francisco. Charleston to Tallahassee is the front line holding out bearable temperatures against a continent of frozen water. 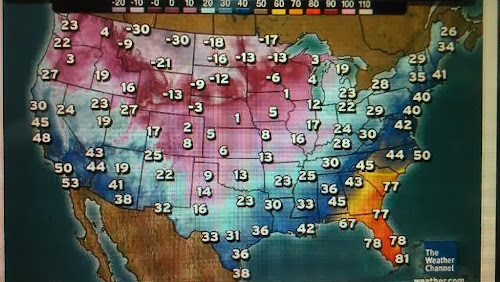 The little strip of orange depicted above looks like this on the ground. Reading, in shorts, on the porch. 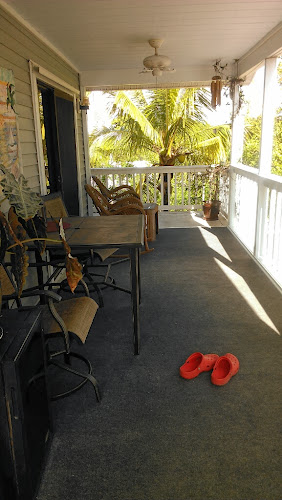 We will pay for this sooner or later with a monster hurricane, but for now, I'm basking.

Posted with Blogsy
Posted by Conchscooter at 12:01 PM 4 comments: 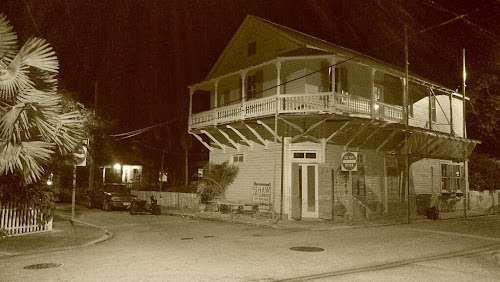 Key West in the middle of the night is surprisingly peaceful especially if you are used to seeing it only in the hustle and bustle of daytime hours when visitors are abroad on foot, bicycle and scooter. These two guard kitties didn't dare move till after my attack Labrador had lumbered by. 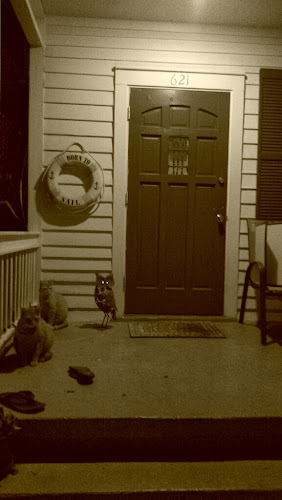 Classic Key West porches, perfect for sitting out on a mild December night, if only the house itself were inhabited. 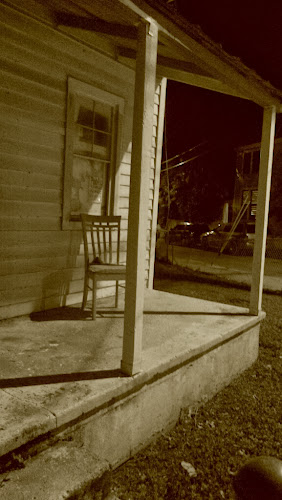 Elizabeth Street looking down the hill toward Truman Avenue. 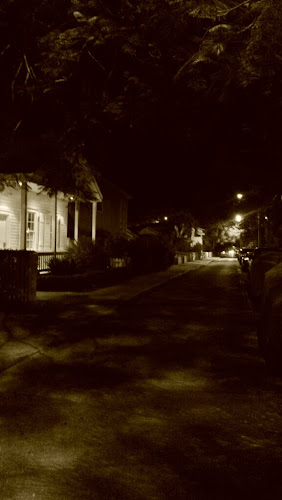 I particularly appreciated the absurdity of this situation, classic Teutonic Yuletide decorations on the porch with the front door wide open to let in a cooling December night breeze. 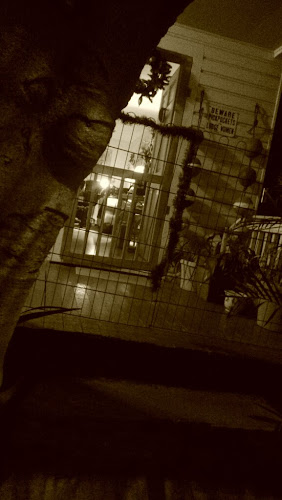 This house for some reason puts me in mind of homes I've seen in Puerto Rico, doubtless due to the creative use of tiling. In Puerto Rico though, the wall would be much higher with broken glass and barbed wire on top to discourage uninvited visitors. Crime is a real problem on that lovely island. 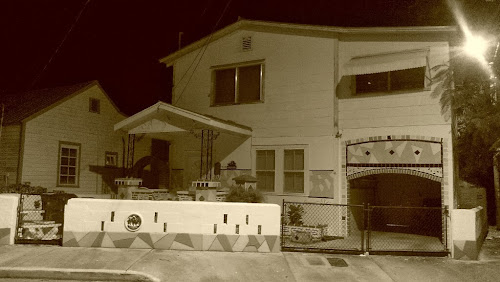 I always like to see classic Florida louvered windows, relics from the time before cheap sir conditioning became available. And they are as functional as ever. I have slightly more modern versions at my house and they let the breeze circulate while keeping out any stray rain that may be falling. 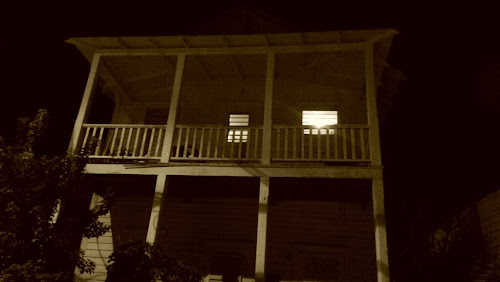 My wife and I are planning a stay-cation on her Christmas break, taking advantage of whatever few days I have off. The idea is to go out of our way to try some eateries we always want to visit but don't take the time to patronize. Seven Fish is on the list, as seen below, and a review will of course follow. 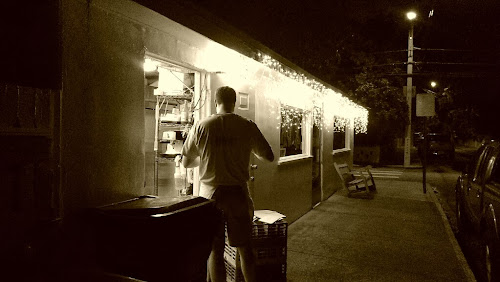 This trailer park is now closed. The money lenders at the Catholic Church sold it to developers and the residents, the usual clutter of low income inheritors of the Earth per the Sermon on the Mount, have been given vague relocation promises. One has to hope the developers make a real killing because as we know these days massive wealth is a sign of God's favor. The poor will of course eventually get the kingdom of God, per the beatitudes but until then best of luck. 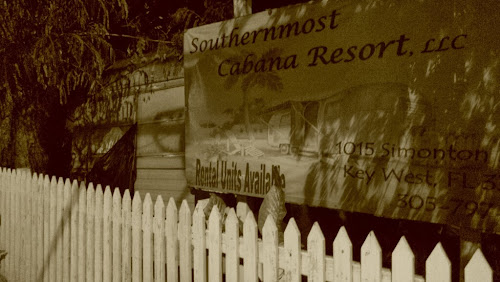 A modest dwelling like this in the heart of Old Town not only will cost more than half a million but it will require substantial operating costs as well. Key West is among the most expensive cities in Florida. 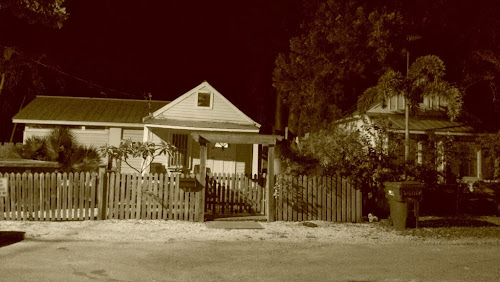 I was not out late at night, so there were a few people around. Bicycles make great urban assault vehicles in a nation dominated by large trucks on city streets. Wisconsinland: Disappearing Landscape laments the loss of open space to the construction of suburban communities that are totally car dependent. Not so Old a Town: 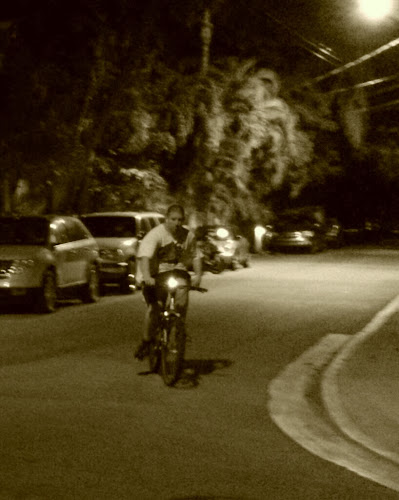 The wall surrounding the land belonging yo the Minor basilica of St Mary's. No plans to sell this lot off to developers! 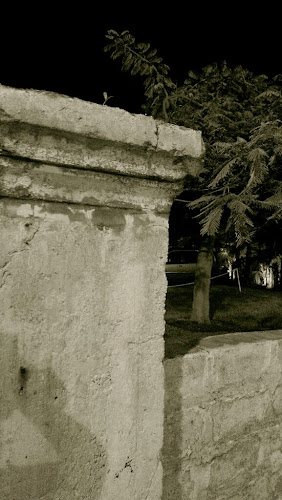 The church was declared a "minor basilica" by the Vatican and this title is bandied about like a temporal badge of distinction by the spiritually inspired church. I don't think Pope Francis' devotion to the poor gets much traction here where community leaders get on their knees and hobnob with God's representatives on earth, probably not about hiring standards and rates of pay. On Stock Island though the church operates a much needed soup kitchen and food bank that keep the working poor nourished and grateful enough not to demand living wages. 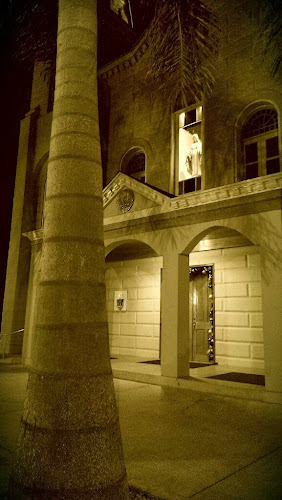 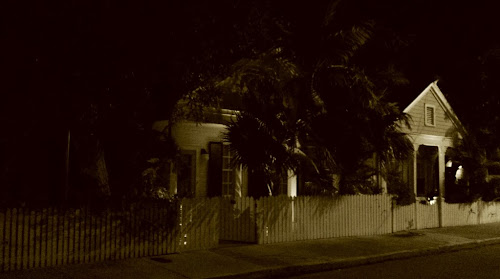 It's the season of goodwill and this is my favorite house decoration, near the cemetery. 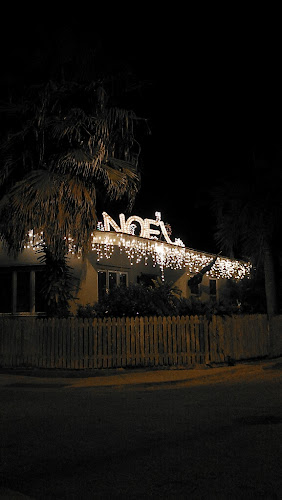 It's a reminder that everyone is supposed to be nice for a few weeks. That includes the old biddy who stopped as I was taking the picture and observed Cheyenne resting comfortably in the gutter and started to give me the third degree about torturing my dog. I felt like John Cleese and the Norwegian Blue...she's just resting I insisted to the gaunt Miss Marple eyeing me like I was a child molester. She's...heavy she said. So am I, I replied but she's an elderly Labrador and I have no excuse. Lucky for me it was the Christmas season else she'd probably have brained me and stolen my dog to save her from further abuse. Had she had half the brains of Cleese's parrot I'd have told her in no uncertain terms to go and save a dog from the pound and to bugger off and leave us alone. As it is even I am infected by the Christmas Spirit and I just walked off without further ado. Ho ho bloody ho.