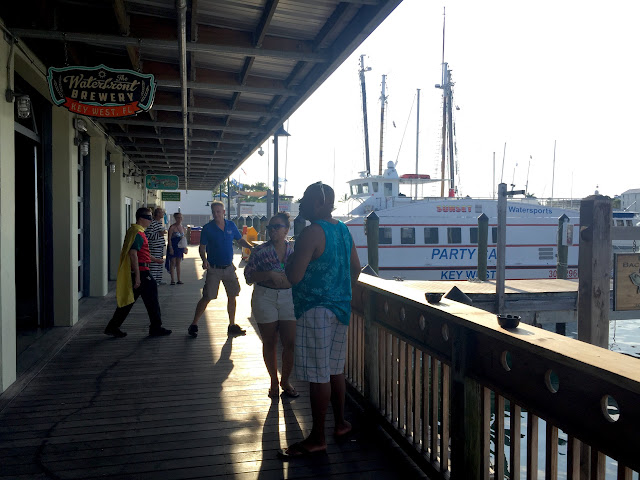 A little Fantasy Fest content might slip into the pictures because my wife and I came here before walking down to Duval before the Grand Parade last weekend. Mind you swimsuits aren't unusual along the city waterfront. 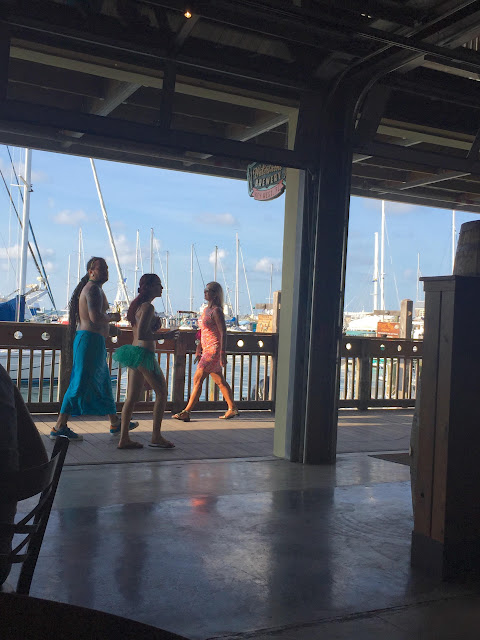 The Key West Bight waterfront is owned by the city, it's one of those smart moves which pays dividends over the years and deserves to be emulated by sitting commission members. The land around the waterfront belongs to the city which leases it to the businesses. There is a public commission which overseas the property and which like every other transparent public entity, the Aqueduct and Keys a Energy included, comes in for rumbles of popular discontent. However, give them credit as the Bight is a pleasant place to walk and thus far is free of national chain domination. 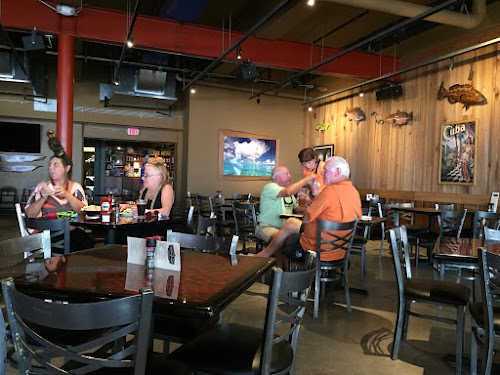 The brewery is open to the water, the interior as you will see is sharp bright and modern and in our case service was perfect: prompt polite and friendly but not intrusive. So much so I didn't get the hist's name but he directed me to exactly the beer I wanted. They have half a dozen brews with only a couple of India Pale Ales so it is possible to try beers that aren't just bitter. My wife had a cider that was tart and refreshing and tasted of apples. We also got to see a growler you can buy and fill with beer to go. I wasn't going to carry that around with me but it's a thought for the future. 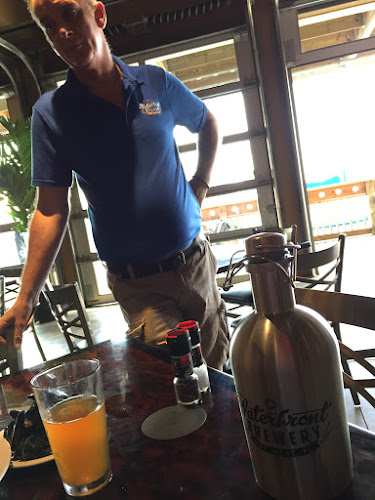 We ordered off the appetizer list, and if we couldn't finish it wasn't because flavor was lacking...there was a lot of food. The bruschetta was surprisingly good, a fish I don't often order but I was curious. The tomatoes were diced the balsamic was sweet and the mozzarella didn't taste mass produced. I assume it must be but it was good. I liked the mussels okay but the fish dip was the star, packed with and just enough binder to hold it together. I couldn't stop eating it. 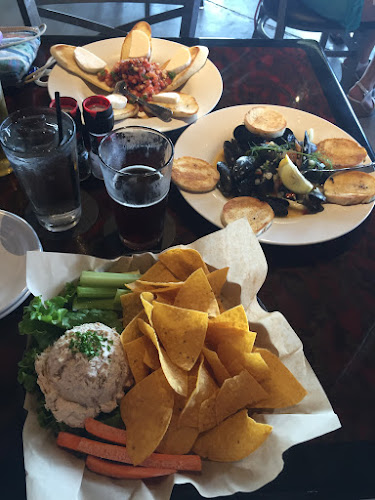 Tim, one of the bosses came by (I did say this was Fantasy Fest weekend didn't I?) and we were glad to tell him things were peachy, because they were. The Waterfront Brewery is part of a local network of relatively new eateries across Old Town including the Porch which has got rather too popular, Yogi Berra style. The cocktail bar next door is not my cup of tea; Two Cents on Appelrouth Lane lost me with high prices poor service and a hipster vibe when it opened, and Kojin noodles, much adored by many, is undercut in my opinion by Sister Noodle in New Town. Badboy Burrito my longtime favorite has slipped too since I visited it at its new location at the Bottlecap, so all in all I wasn't expecting much here. I was surprise do andvpleased. I hope they keep it up. 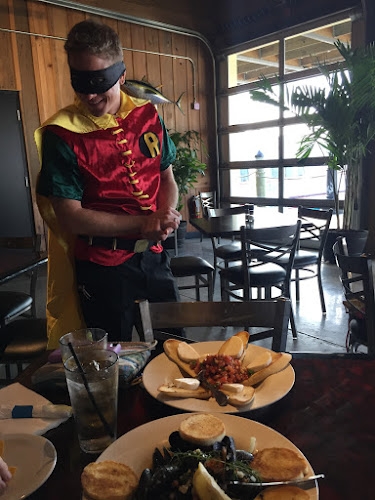 There are of course the ubiquitous televisions everywhere but from the restaurant side of the divide they aren't as obnoxious. Plus you get to sit like an adult with your feet on the floor at the lower tables. 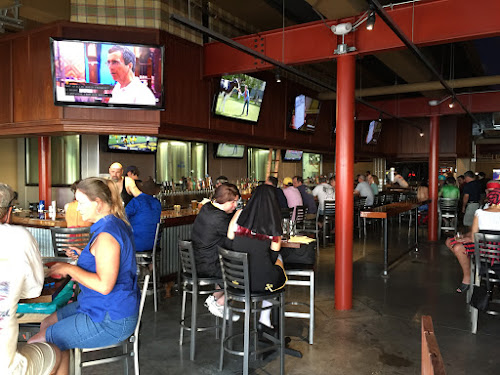 The building is vast (lots of lovely floor rent for my employer the City) and it's used to full advantage offering pool and shuffleboard as well as a couple of video game machines. Eventually I suppose it will become well used and beery but right now you could eat dinner off the floor or any piece of furniture. Which would be an odd thing to do but I like the sharp bright air of cleanliness. I don't suppose Hemingway would approve but he's dead and I'm not (yet) so I'll take it as it is. 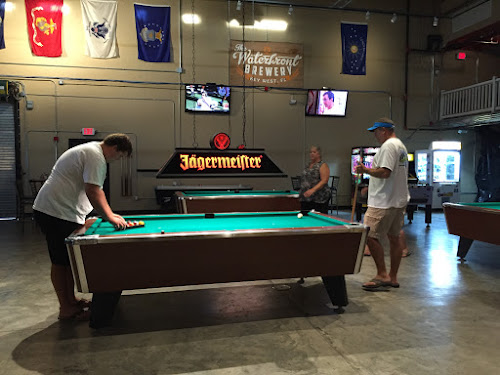 I told you the place is huge and I didn't even look at the rooftop terrace... 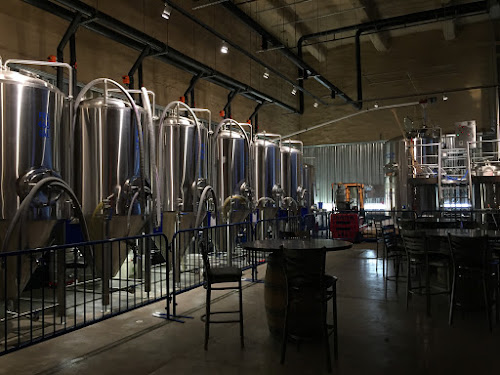 This used to be the Waterfront Market, organic long before Publix figured people didn't want pesticides with their lettuce. It closed blaming the city for unreasonable rents and with went a hang out for water rats, a juice bar with WiFi, decent sandwiches at the counter and some fine people watching opportunities. Here are a couple of pictures I took "back in the day" when this building was still a market: 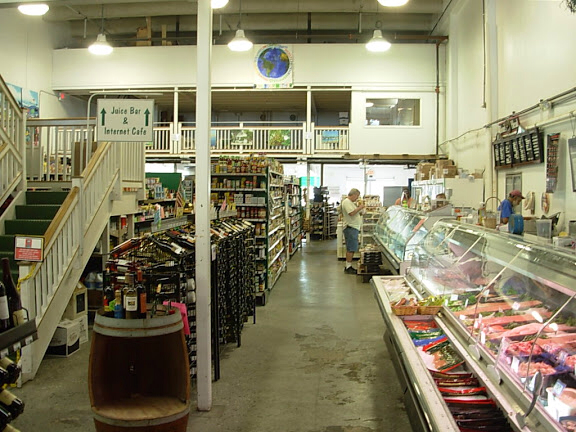 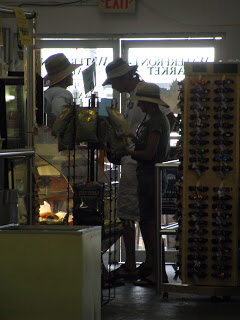 Like the old juice bar gallery, which is still three, inaccessible and unused, the front porch overlooking Caroline Street is there but nicer and more inviting. 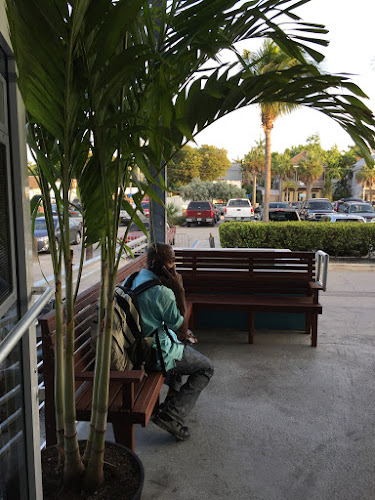 And Rick Worth's art still decorates thevoutsidevof the building. Mutatis mutandis (at last I have found somewhere to use that absurd phrase) the Waterfront building still serves the community. And that I like. 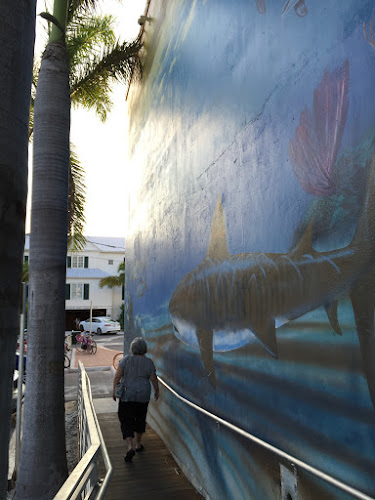 I hope success doesn't spoil the place because I am still looking, not very energetically, for a replacement for Finnegan's Wake, the much lamented Irish pub of yore.