I haven't lived in Key West since 2004 and I haven't wanted to either. In the bad old days people thought I was weird for enjoying life 25 miles from Duval Street. Yet I still enjoy living in the  island suburbs. I was reminded of this fact of my life when I got a call at work from a city resident whose car was towed for parking on the street long enough it was considered abandoned. But it was in front of my house the Old Town resident wailed. City ordinance was all I could tell him, thinking about my ample off street parking at my suburban home. 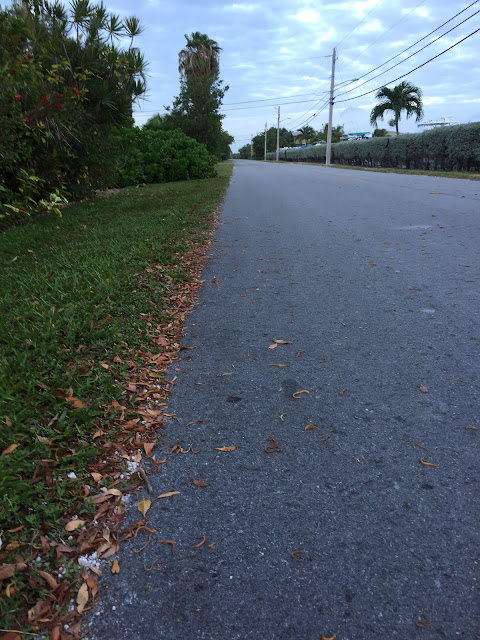 Once you acknowledge that working nights makes a huge difference my own preference for living out here starts to make sense. My commute to Key West works in the opposite direction of the heaviest traffic as everyone else is coming or going the "other way round" to me. Plus I need to sleep when most people are awake and MAKING NOISE! Out here the homes are mostly empty as are the streets and there are no bars or other source of confusion.  I sleep well with heavy black out curtains on the windows. 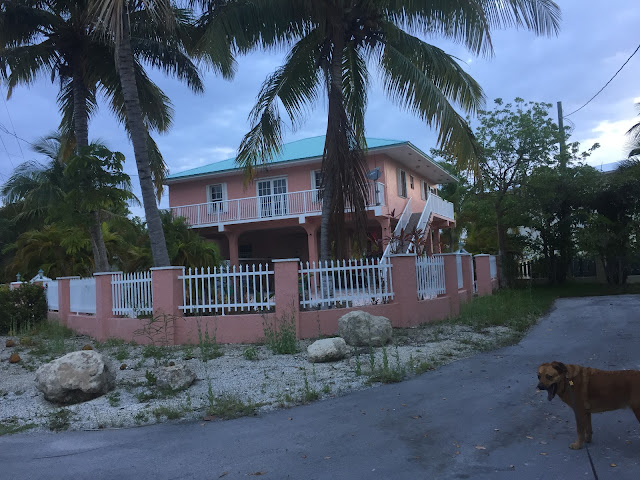 My wife works as a teacher in Marathon at Mile Marker 50, and her commute is as easy as mine because fewer people drive to Marathon from Big Pine and that section of road is almost entirely 55mph and includes the Seven Mile Bridge which my wife enjoys commuting over. She does not tire of the views. 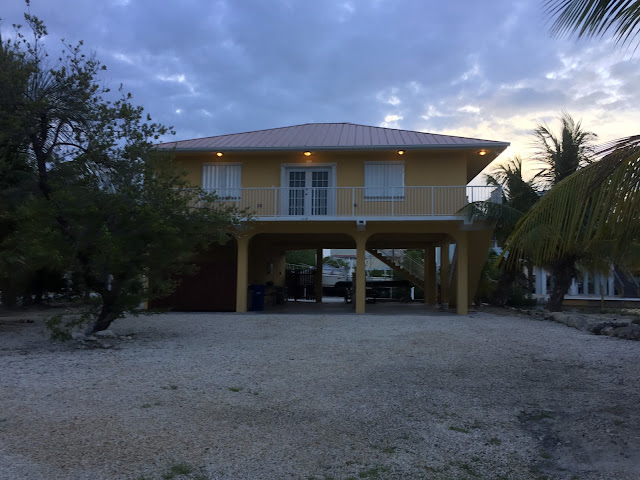 It used to be that many of the workers in Key West could afford to live in the city and enjoyed their non existent or abbreviated commutes. Riding a bike to work or driving five minutes was the norm. Then the money started to flow as the 2008 economic crisis did very little harm to property values in our year -round summer climate and people realised this was not just a great vacation but a sound investment. Which has had the effect of wrecking the year  round rental market in Key West and has created astronomical house prices. This house below isn't cheap. 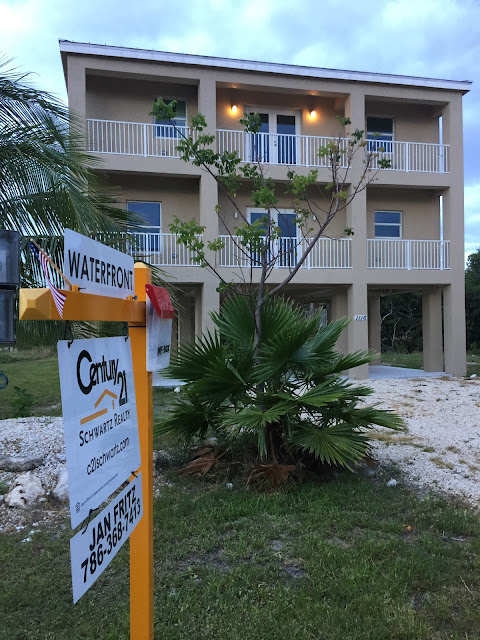 Consider they are asking three quarters of a million for this rather unattractive solidly built (I hope) box. However beauty is more than skin deep. It's brand new and fully equipped with the sort of appliances and facilities most Americans take for granted in middle class America. Proper air conditioning, full sized bathrooms and faultless plumbing. Plus you get four bedrooms and three bathrooms and off street parking. You get some kind of yard and space between your place and the neighbors and a dock on a canal behind the house. 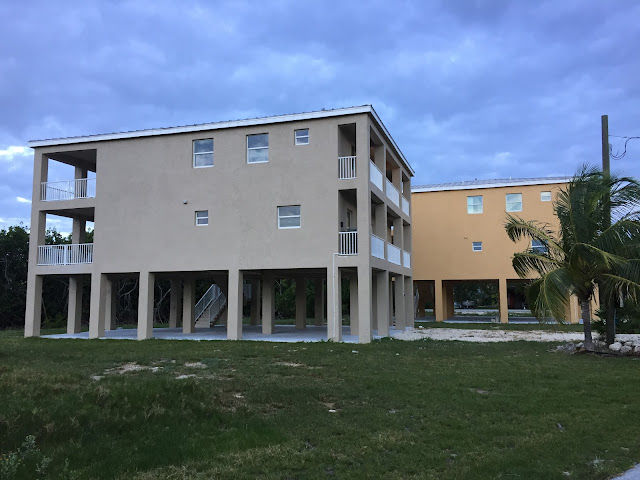 In Key West opposite the cemetery this cottage with one small parking space and a pool costs a million bucks. But  you could walk a mile or so to Ricks and Sloppy Joes or spend ten bucks on a cab.... 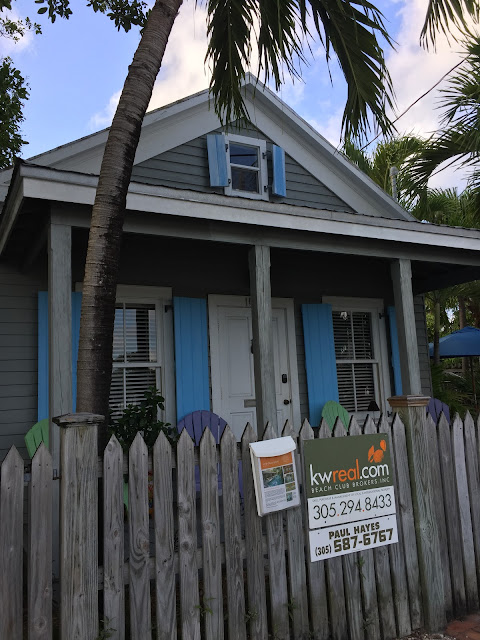 Living on a  canal a forty minute drive from downtown Key West appeals to people who want a vacation home with easy access to fishing, not much crime and peace and quiet, and they are building to accommodate the preference: 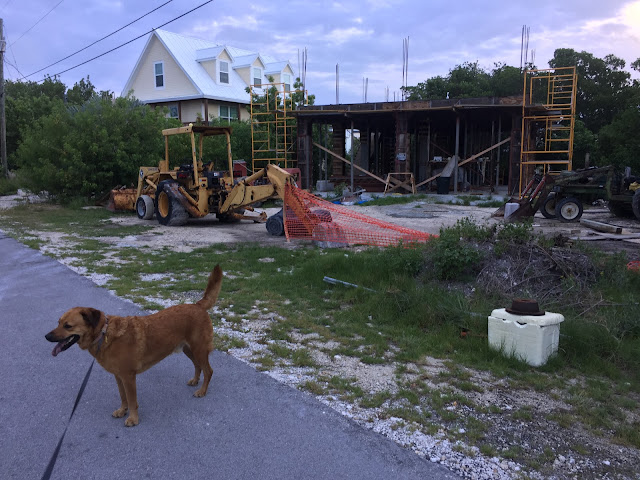 Then if you are someone who likes to have toys, like boats trailers RVs or motorcycles or you name it, the suburbs allow you to have enough land to park the stuff near, around or under your home. 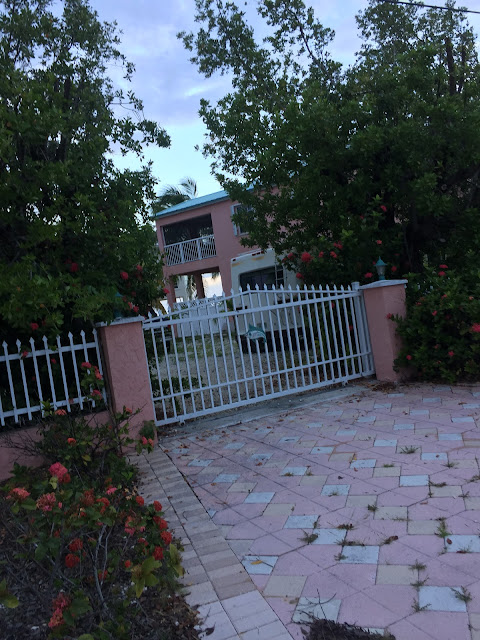 Permits to build are not easy to get and there can be a wait before permission is granted. Some people want to design and build their own, some people buy land as an investment and look to the day their bushes become stilt homes to retire in. 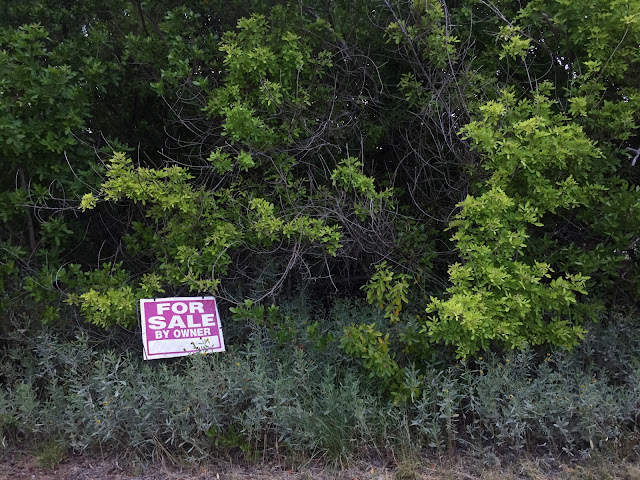 It's amazing how much energy and ingenuity goes into the Florida Keys lifestyle. Boat lifts to keep boats safe and clean during hurricane season... 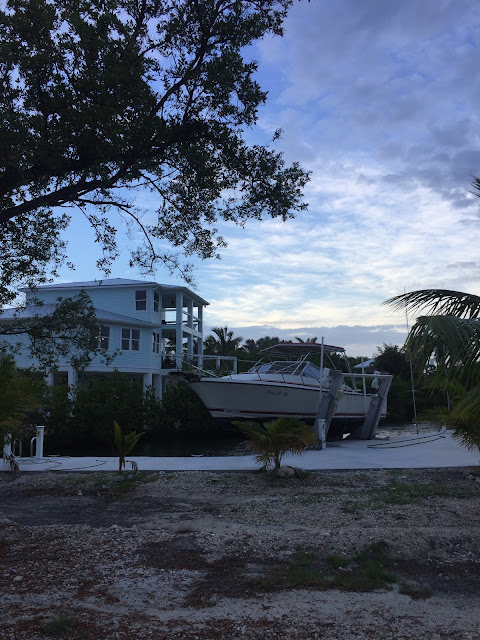 ...and for people who visit say three months a year these elaborate pieces of machinery are a godsend. Once installed their use is free. Better than renting a  storage space. 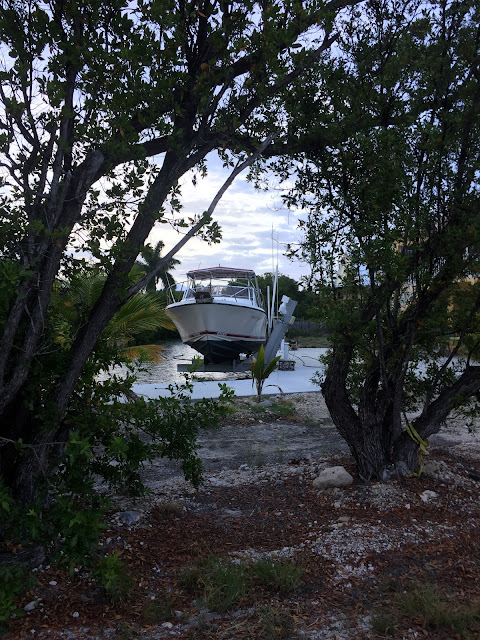 No need to go to Mallory Square to see  a sunset out here if your deck faces the correct direction. 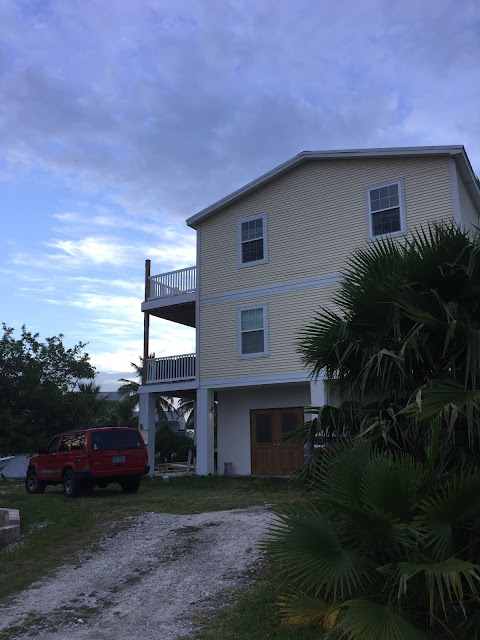 I think one of the hardest things to bend your mind around in thinking about when considering not living in Key West is how do you give up the romance of the Conch Cottage, the tight little neighborhood, the social aspects of walking to Fausto's for groceries or cycling to a movie or a play, being part of a tight knit community. 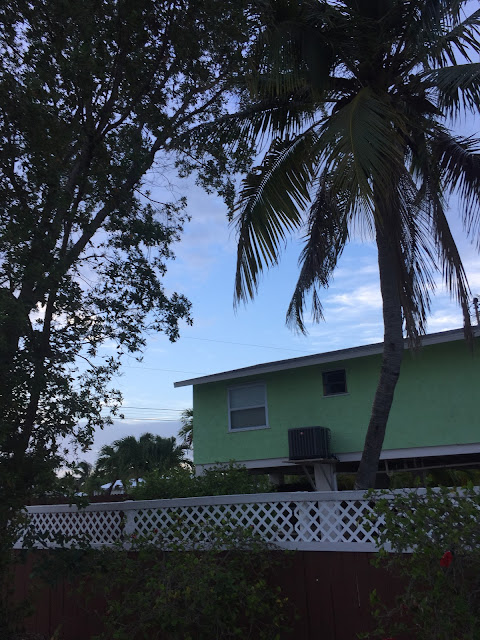 While all of that goes by the wayside when you live in the suburbs, for a working stiff there is the decompression value of the commute (especially by motorcycle) the fully functional homes, the ease of parking etc...And maybe you need to live in the close quarters of Old Town and discover you like living cheek by jowl and paying an exceptionally high rent (no pets) to taste the experience. 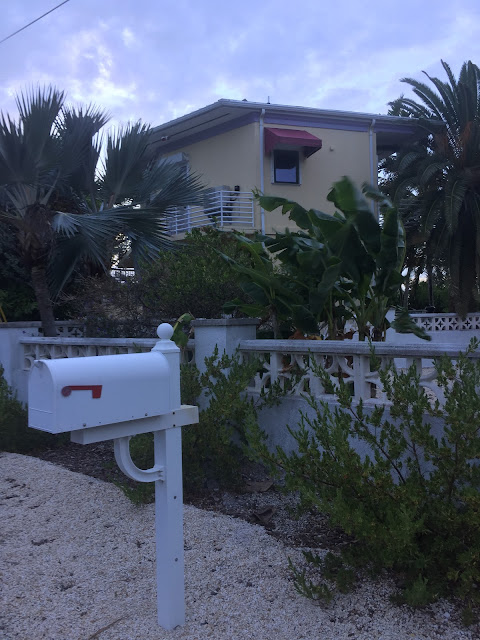 But I have never regretted my preference for living out in the boonies, too far for friends to casually drop in, too huge a drive they say(really!) to come out for a party, too isolated from the drunks and street people and sirens, too bland and suburban for a romantic Key West lifestyle. 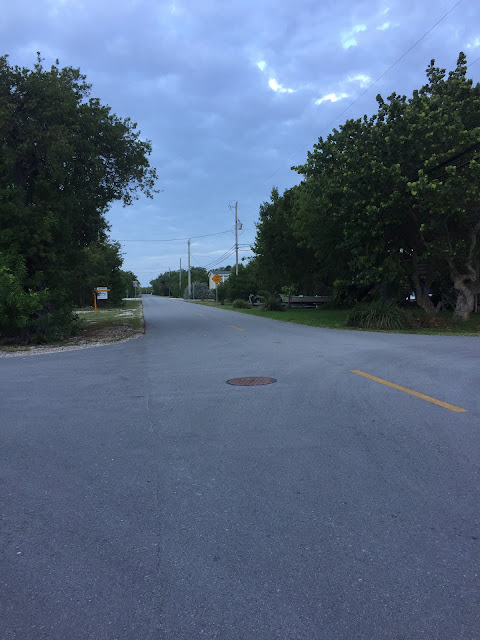 Rusty does all right out here too. Occasional street walks and lots of wooded mangrove walks, and lots of room to stretch out indoors in the cool dry air of the central air conditioning... 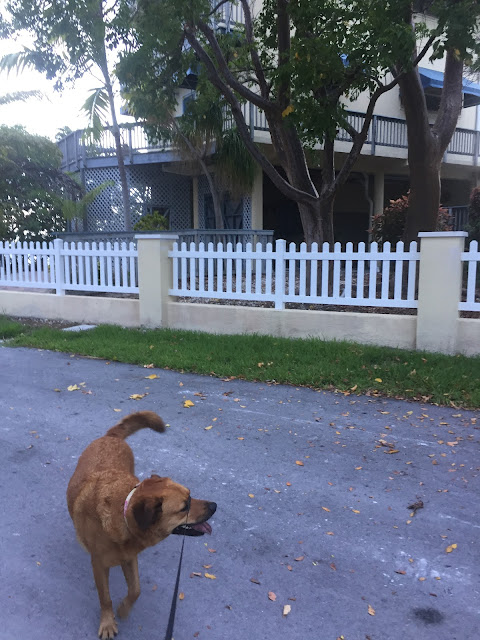 Suburban living in the Keys. Most people never think of it.
Posted by Conchscooter at 12:00 AM 2 comments: