A reprint from August 2009 when I tested a Triumph with clip on handlebars and decided I prefer my standard Bonneville. That was seven years ago too.


"The past is another country- they do things differently there." I have always had a hankering for a Triumph Thruxton under my bum, to more accurately reflect my nostalgia for my very well spent motorcycling youth. Something like this: 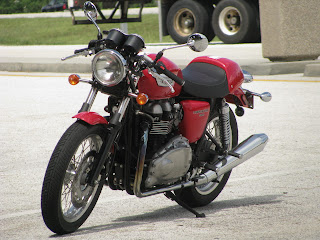 When I was a kid I never quite understood who bought the "Touring" models of the motorcycles that interested me. My first bike, after my moped years, was an MV Agusta 350, with clip on handlebars, just like the 2007 Thruxton pictured above. My next motorcycle was a Moto Morini also the 350 Sport model with stubby little handlebars and a crouched riding position and another flame red paint job. After 200 miles on the Thruxton pictured above I admire my long lost youth more than I would have thought possible. How the hell did I ever ride Europe from one end to the other crouched like that? I can't do it any more, that's for sure! 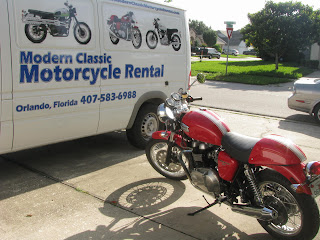 My wife said to me out of the blue one day last week "I've been looking up motorcycle rentals in Ocala but I can't find any..." and she then announced that when our little road trip stopped at Nancy's place in Ocala I would have the day off while they went shopping and would I like to rent a bike to go for a ride by myself...? Like proverbial wild bear crapping in the woods I got to work with Google figuring my wife just couldn't find what must be there- a rental in Ocala. Well, there wasn't but I did come across Modern Classic Motorcycle Rentals of Orlando and I started to figure how far Orlando was from Ocala. It seemed do-able so I called Frank. 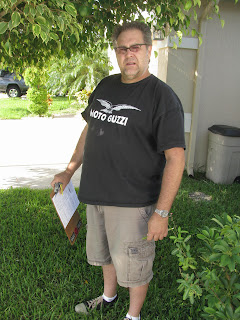 Clearly a man after my own heart he gushed about his Triumphs for rent-he's owned a Bonneville since they were first imported in 2001- and at $69 for eight hours I easily talked myself into a day on a Thruxton. For $49 I could have had a Bonneville or Scrambler! With insurance and stuff the total 8 hours on the red rocket came to just about $100 an excellent deal by any standard. I was real happy to find my way to Frank's house and pick up the Thruxton, a brand new carburetted 2007 model with just 280 miles on the clock. It looked incredible. 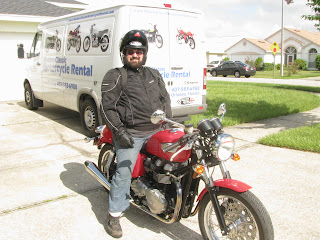 The Thruxton (or more properly as Frank would have it the Bonneville Thruxton) is based on the Bonneville 865cc engine and frame with just a few modifications to give it the factory café racer look. It has a smaller 18 inch front wheel, clip on handlebars, and upgraded front forks. The foot pegs are rather fancier than the Bonneville's sturdy rubber clogs and Triumph has used some rather nice hardwear to attach them to the bike: 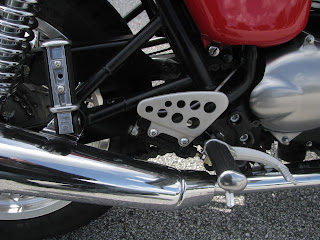 The rider's feet are pushed into a toe down position and the brake and gear controls are substantially lower than the Bonneville's... which combined with the truly tiny handlebars makes you feel like a boy racer as soon as you fire up the docile and easily managed engine. 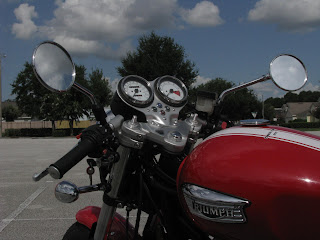 Look at those big white clocks (tach included!) and those stubby little handlebars and that thick white stripe down the back of the tank, which tank is the same identical to the regular Bonneville's, but just looks different thanks to all the other subtle changes around it. The side panels are the same too, but the writing is different and more aggressive on that gorgeous red background: 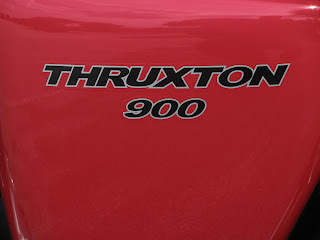 The whole package looks a million bucks parked on the refurbished main street of De Land, a satellite community north of Orlando: 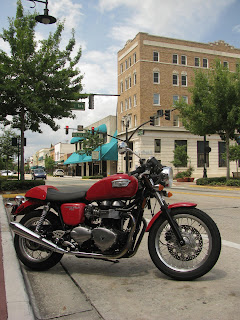 After I signed the paperwork for the rental and insurance I found myself alone in downtown Orlando, maneuvering this red jewel through unfamiliar streets and onto the I-4 interstate highway with no time to get used to anything. It was a strange sensation, the controls are as smooth and light as I am used to on my own Bonneville, the engine which supposedly puts out ten more horsepower than my own Bonneville's modest 65, pulled smartly and the cone exhausts gave a pleasing though very civilized rumble as i moved through the five speed gearbox. Handling was firm, just like my own machine with any lightness produced by the slightly smaller front wheel amply compensated for by the short low handlebars. Looking over my shoulders at lane changes was much tougher than I am used to, and though I am short, 5' 06" (168cms) and I have short legs, yet I still was able to clasp the cylinder heads with my knees if I wasn't careful. For taller riders Triumph has added wire guards to the cylinder fins: 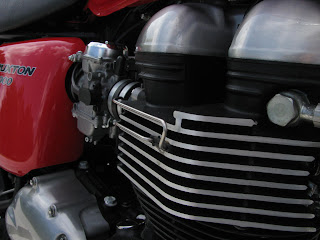 The Thruxton invites acceleration, I leaned over the bars, the bright chromed headlamp shell reflecting the sunlight and shining in my face like a beacon. I opened the throttle and the café racer pulled smoothly away. Some people think these modern classic Triumphs are short changed in the horsepower department, as though anything less than a hundred horsepower on a 900cc bike is somehow wrong! Perhaps this style of riding is incomprehensible to a twenty year old looking for a 14,000 rpm deadline on a modern water cooled four cylinder 600cc crotch rocket. The Thruxton is a very different ride and for my money much more pleasant. A few Harley riders waved as they passed in the opposite direction, some of them apparently recognized a classic air cooled ride. I got a second glance from T E Lawrence's doppelganger riding a Ducati 1099 on the freeway, helmetless with his middle aged dyed blond air flapping uncomfortably in the wind. He should have been friendlier as I was closer to a Brough Superior than he was on his Italian exotica. (Lawrence of Arabia loved his Brough Superior motorcycles in the twenties and thirties until he died on one). 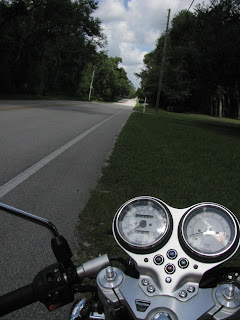 I don't know the Orlando area very well and though Frank tried to direct me to some twisties I wanted to try to get out of town and take some country roads well away from the traffic of the big city, and make no mistake, Mickey Mouse's home town is sprawling like you wouldn't believe. Florida is not known for it's great winding motorcycle roads but I gave it my best shot. Every time I saw a side road I took it and ripped up lanes and back roads big and small. I found a failed housing development deep in the woods and spent a happy five minutes snicking through the gears and weaving around my own private race course past the undeveloped housing lots. The bike was brand new so I wasn't pushing anything but I enjoyed the performance I did squeeze out of it. Very calm and middle aged of me. Besides my wrists aren't as resistant as they used to be and the heat was truly astonishing. It was hot as Hades out there, so much so I took off my gloves for a while for relief from the relentless fug of hot air to air my sweaty hands out and let some air up my sleeves. 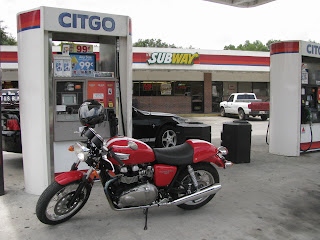 By the time I got back to Frank's place I had put 203 miles (305kms) on the clock and I think I got around the upper 40s in terms of miles per gallon from two tanks of premium gas that I used. For some reason my own Bonneville returns about 43mpg in the Keys and around 47mpg when I ride the mainland. Perhaps it has to do with the longer straighter, less varied roads: 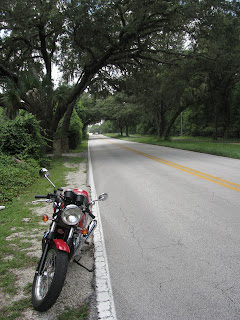 Frank says he finds the Thruxton's seat more comfortable than the standard Bonneville, though that may just be a function of what you are used to. For me the riding position was just too low.It was great fun for sections of roadway that demanded your attention, and it was much more involving to ride head down and crouched over the front wheel with those delicious clip ons grasped in your mitts, but I found on the ling straight stretches I tended to adopt the more upright position you'll see youngsters take up while riding their crotch rockets at a leisurely pace. I put my left hand on my thigh and stretched my aching lumbar regions from time to time. 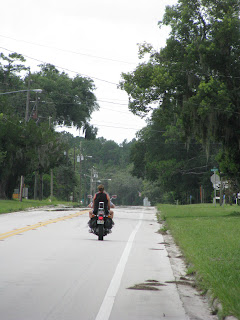 There is a reason I guess why so many staid riders in north central Florida, where motorcycles abound, ride those steady old Harley cruisers. I did meet a few fans of those old Triumphs though, people who come up to you when you ride a modern classic and reminisce about the good old days. This dude picking up a 24-pack of Bud for a Sunday afternoon in front of the boob tube took a few minutes to tell me about his 1960s experiences with a Thunderbird. Personally I like the modern part of the classic thing- reliable vibration free riding on a machine that starts every time. 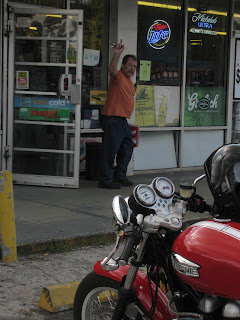 So what about my eight hours and 200 miles on the Thruxton? This is a motorcycle for someone more limber than me and stronger in the wrists, the newer Thruxtons have lost the clip ons and have rather higher, adjustable bars,much to Frank's disgust. I loved getting to ride the bike even if I now know I did the right ting by being sensible and buying the "regular" Bonneville, upright seating position and all. I'm not 19 any more and it's time I realized that. If I had room for a second bike in the garage I don't have, I'd love one of these for my occasional blast around the mountain rides that don't exist in the Keys... 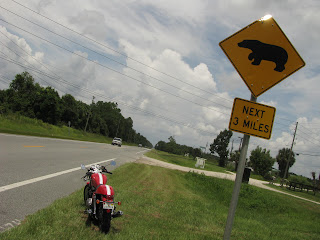 It's stupid and sentimental of me I know but I love this bike. Before I took it back to Frank I sat and stared at it for fifteen minutes. I know its a factory café racer which is a contradiction in terms for the people who used to build their own in the 1960s but Triumph have really hit the nail on the head with this machine, no longer directly produced with carburettors and clip-ons, and thus so much more precious because of it.
As for Modern Classic Motorcycle Rentals you need to call Frank the next time you are in Orlando and he will deliver your bike to your location anywhere around the city, for as long or as short as you want it. He loves these bikes and wants you to love them too. Check it out at Modern Classic Motorcycle Rental (LINK)  or by phone at 407 583 6988 and I know you will have as much fun checking out your dream bike as I did.
Posted by Conchscooter at 12:00 AM 2 comments: