Puerto Lobos was in the throes of a cold front that the day before had dumped inches of rain and freezing temperatures on Tucson. 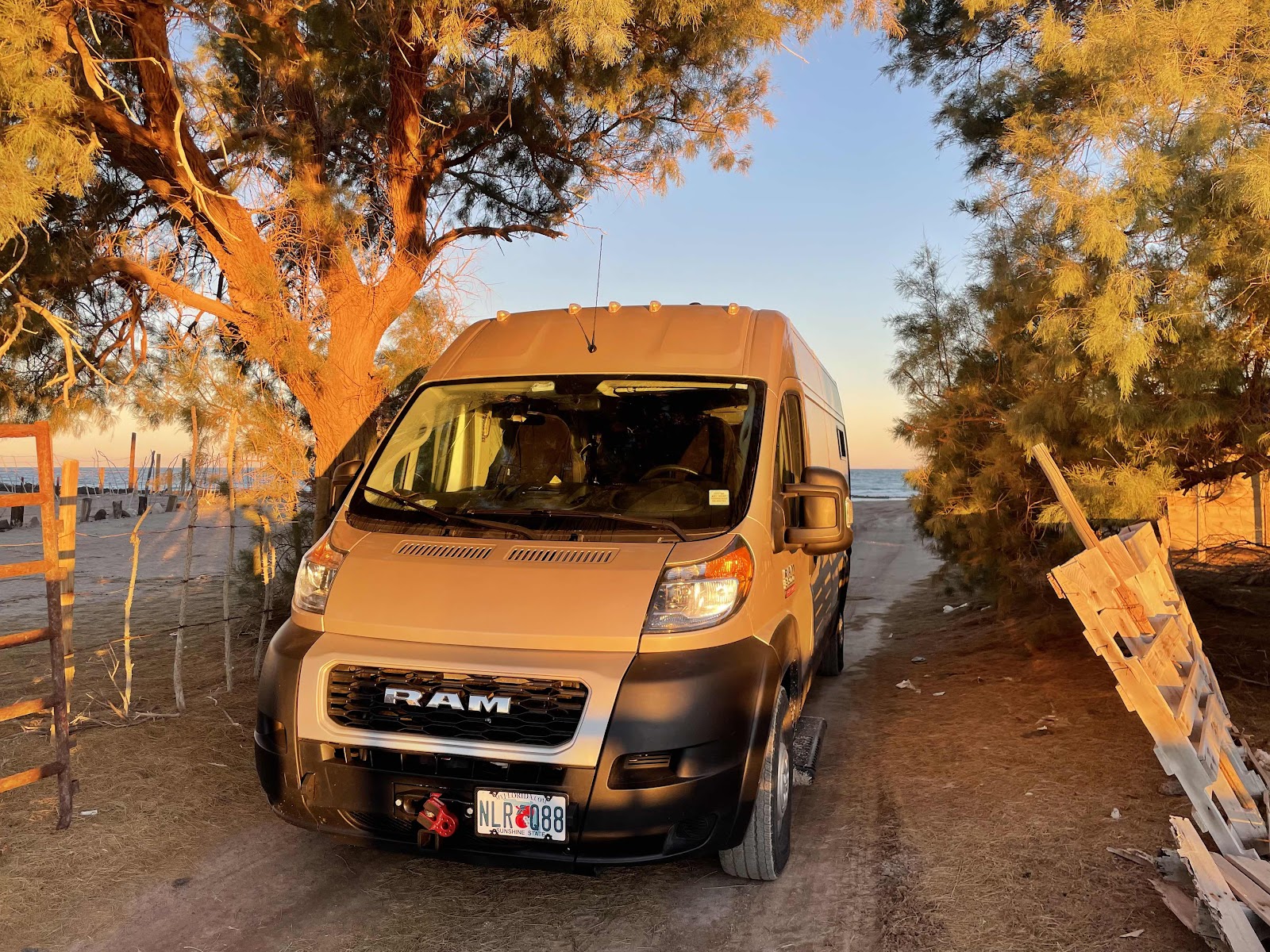 We were tired of strong winds and temperatures that were the wrong side of uncomfortable and we wanted to head south. So we did. 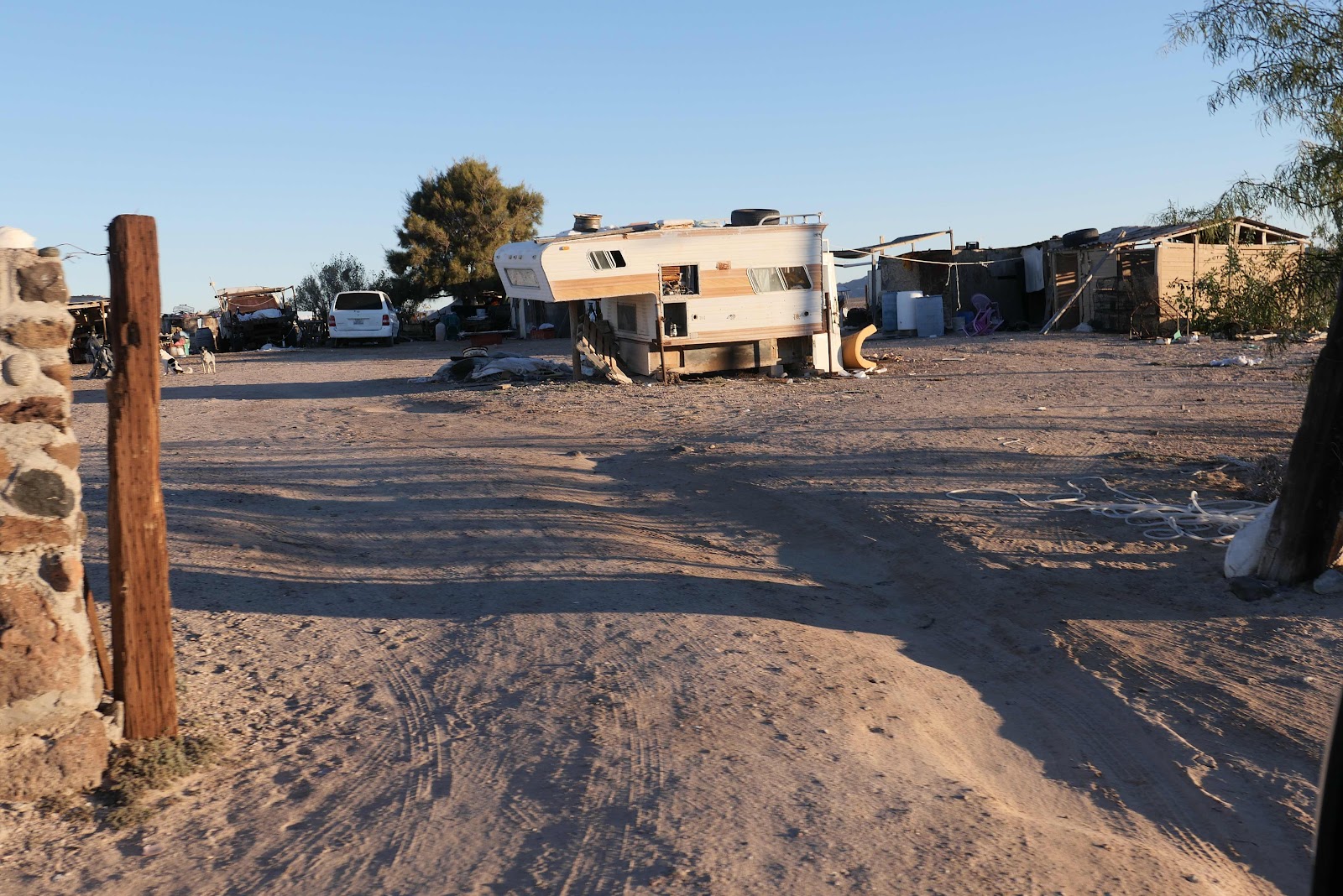 We rejoined Highway Three and headed toward Puerto Libertad half an hour south. It was Sunday morning and we were still all alone on the road. Odd, we thought but who were we to complain?  Layne got up as I turned onto the main road and we bowled along at a steady 55. It was a pleasant drive through the desert lined by spectacular mph rains and glimpses of. The Sea of Cortez to our west. 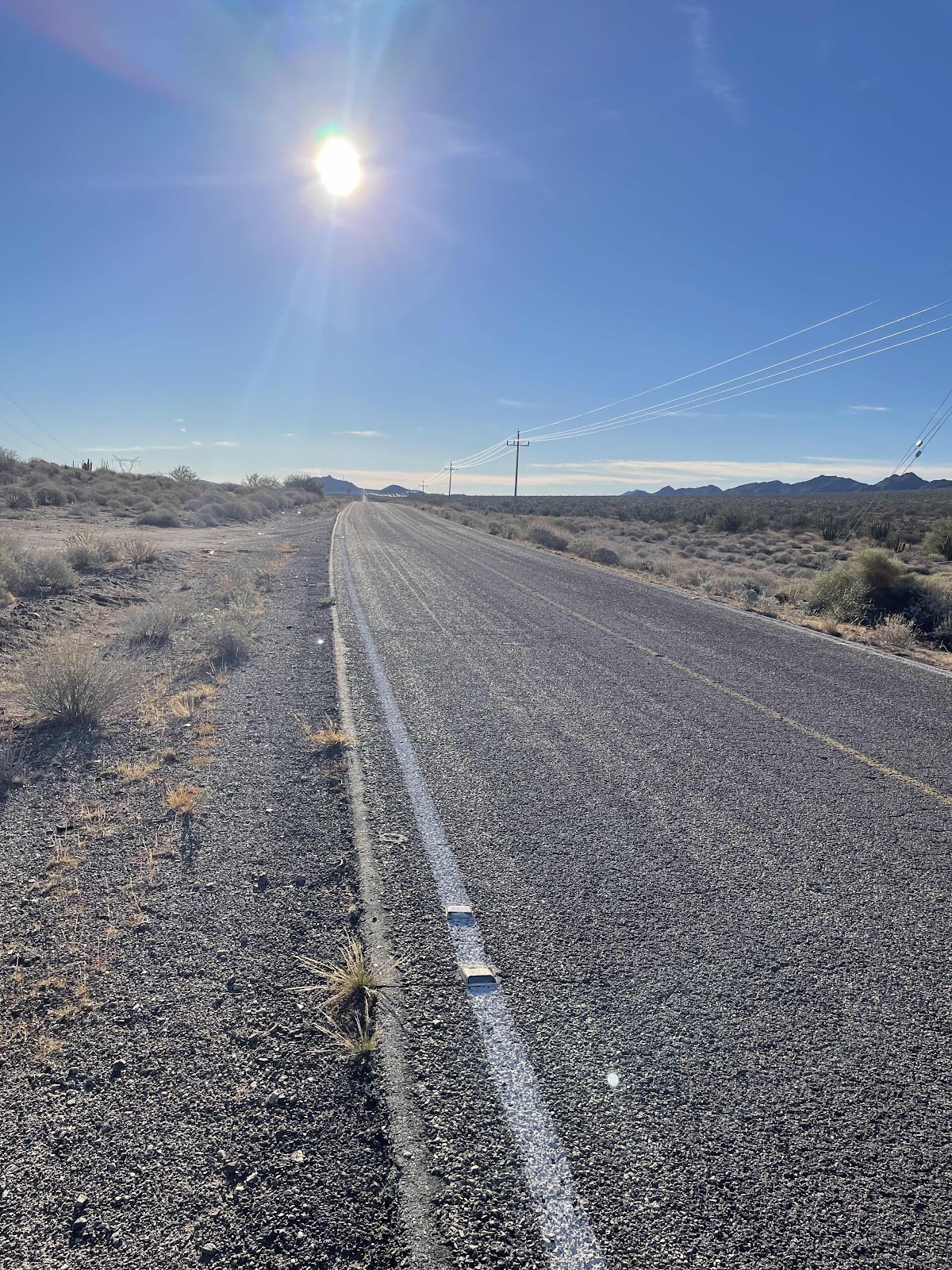 Layne suggested a pause do. He could get comfortably settled and as a bribe to the driver she promised me a cup of freshly brewed Yorkshire Gold tea. Rusty voted for a stop as he loves the desert. 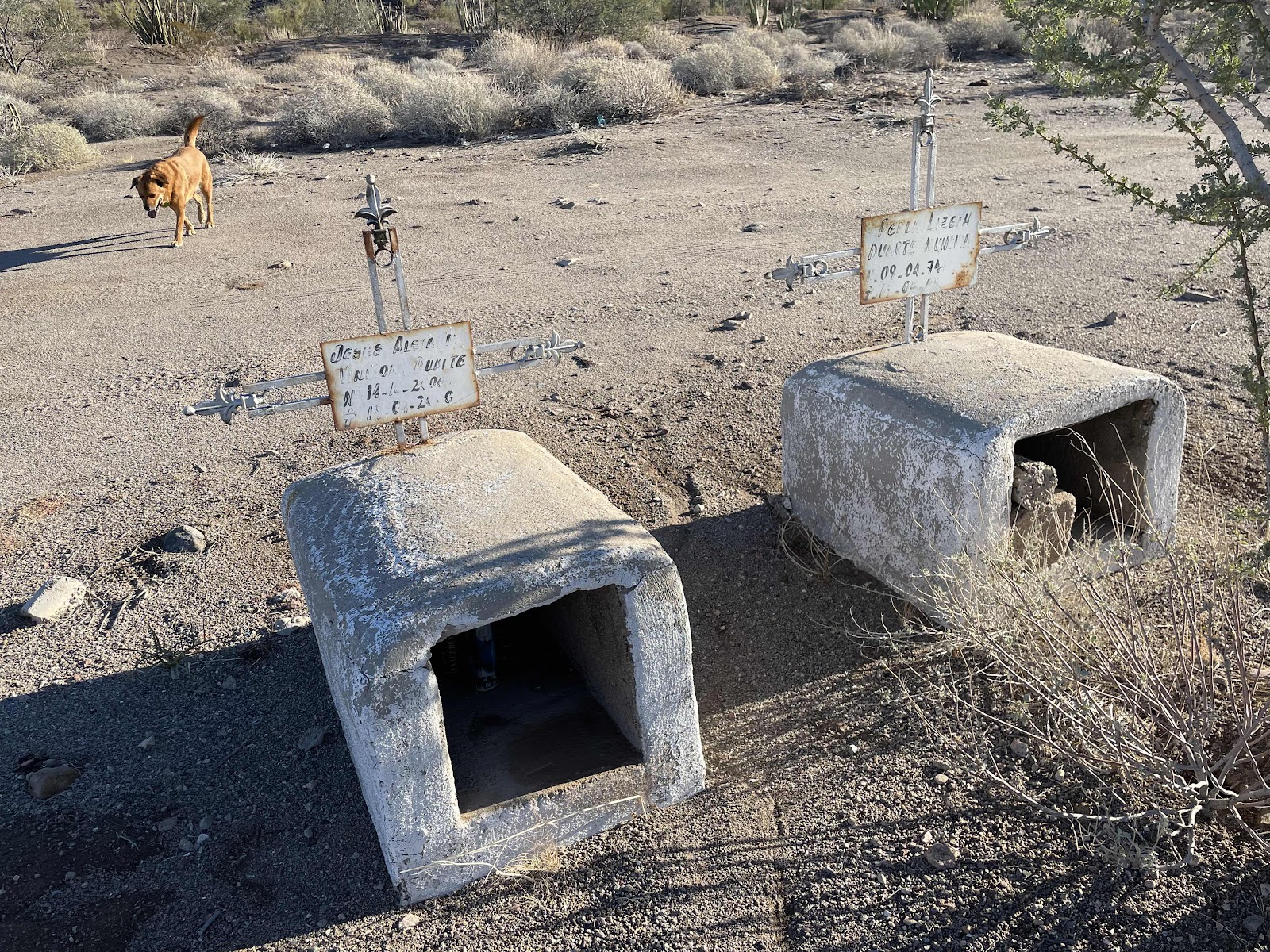 The turnout had a couple of roadside memorials in the Mexican style. The headstones indicated a 35 year old mother and her eight year old son died in 2008. That provoked some reflection. 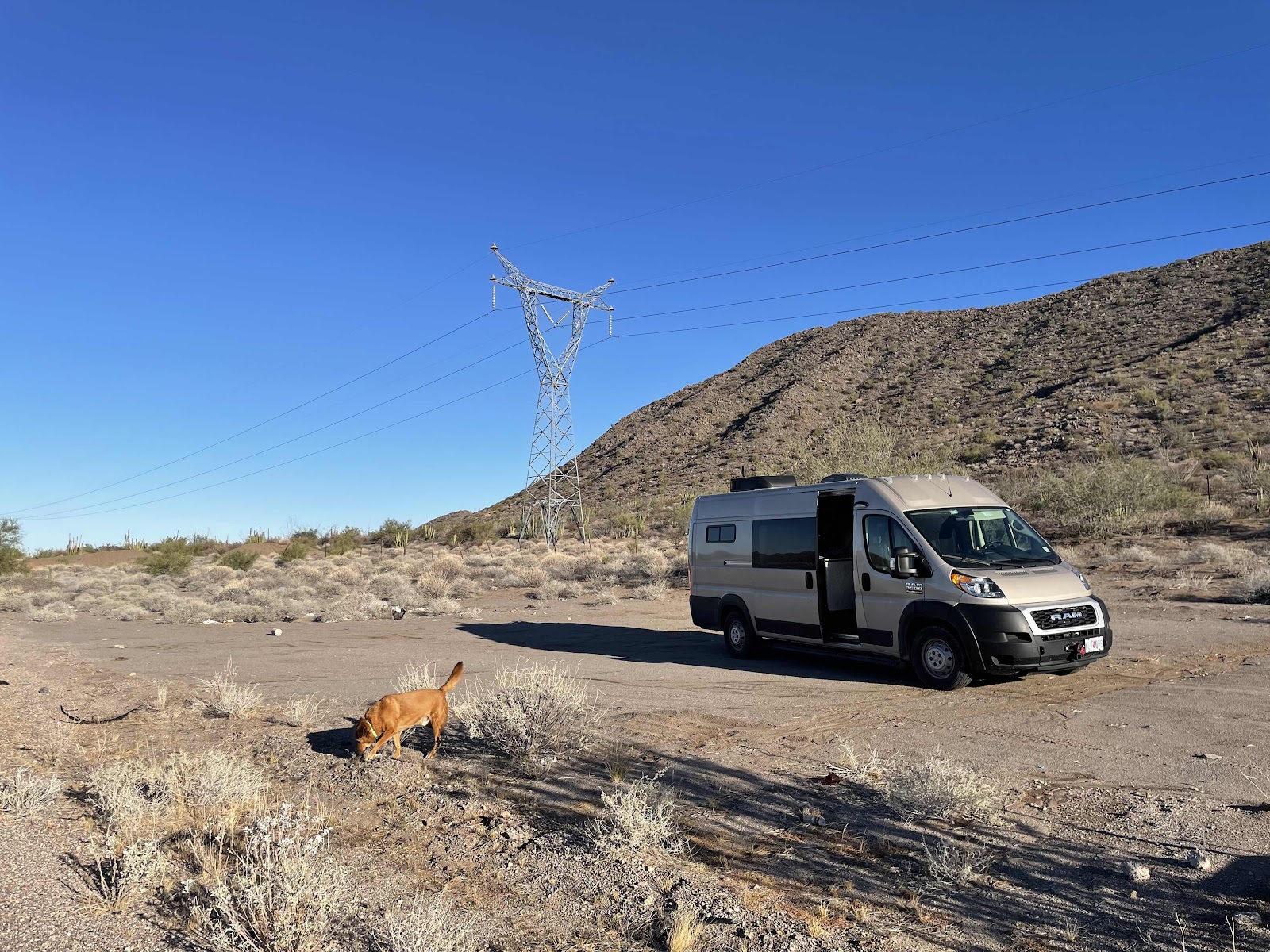 The road to the power station and solar array was broad and smooth and easy. We passed a cop staffing a solo checkpoint with his dog at his feet. I was prepared to stop but he smiled and waved, I responded and we never went below 40 mph. Perfect.  We had places to be. 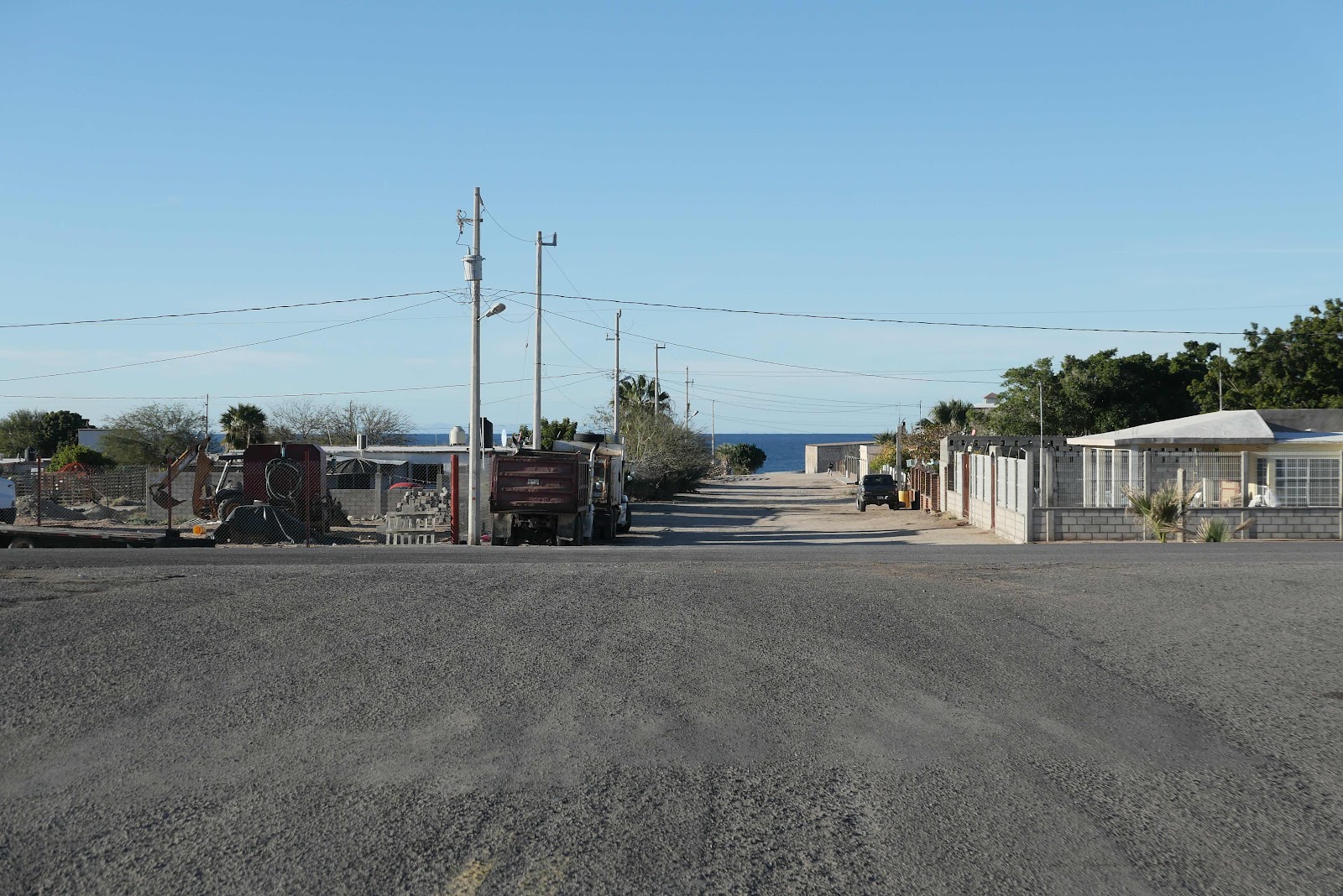 We were going to Costco three and a half hours away. Layne thought I was pulling her leg when I told her there was a Costco in Hermosillo. A likely story she said. Okay then I said feeling very superior. Until we found out why we were alone on the highway. 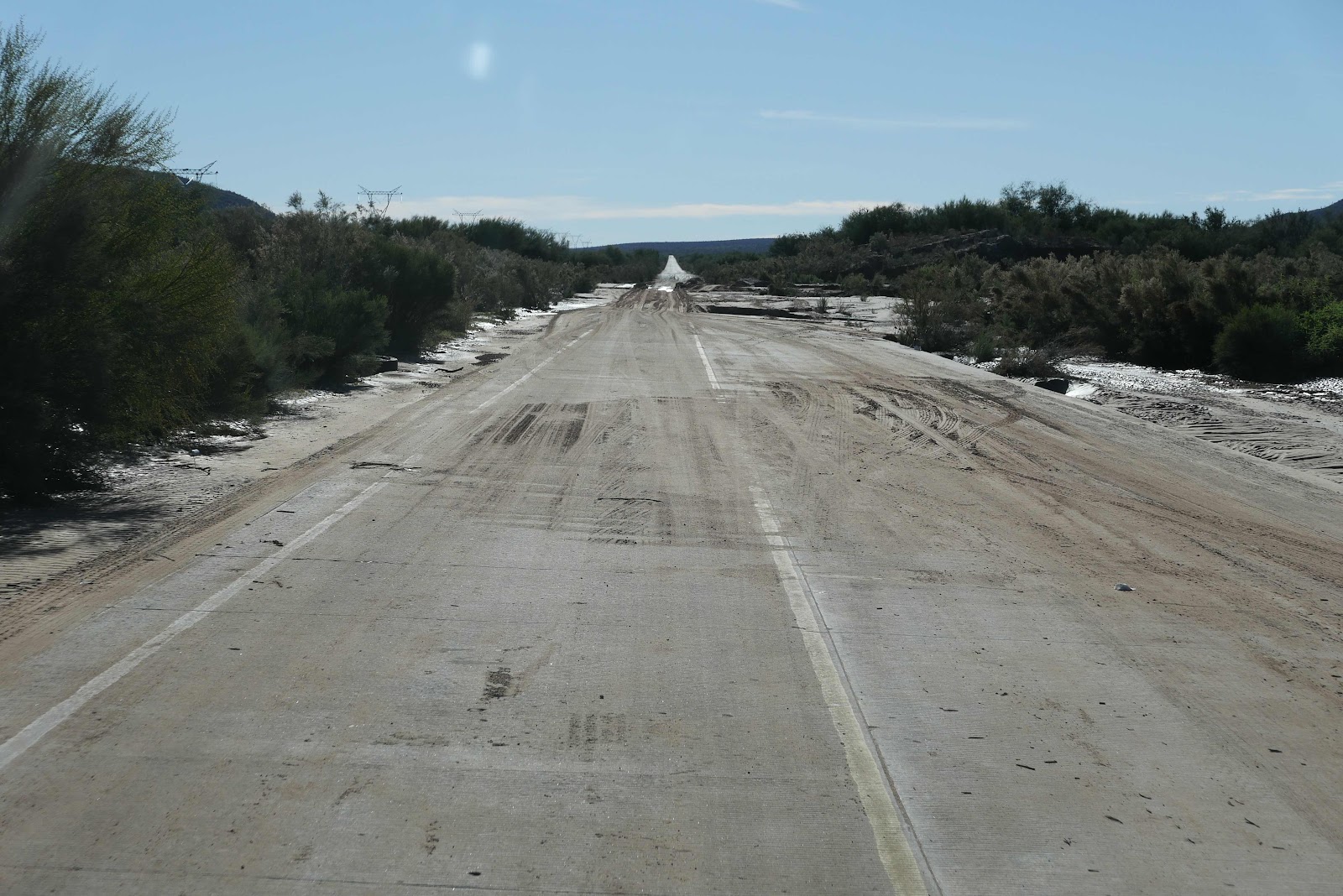 The photos don’t show the difficulty posed by two deep ruts and a rather tall pile of sand in the middle. It became evident as I plunged our low slung van into the mess that it was as well we had put a skid plate under the engine. We were riding on the dirt.  The wheels spun a bit in the muck but I held firm and with some wiggling (by GANNET2) and breath holding (by us) and we were through and into the liquid mud. 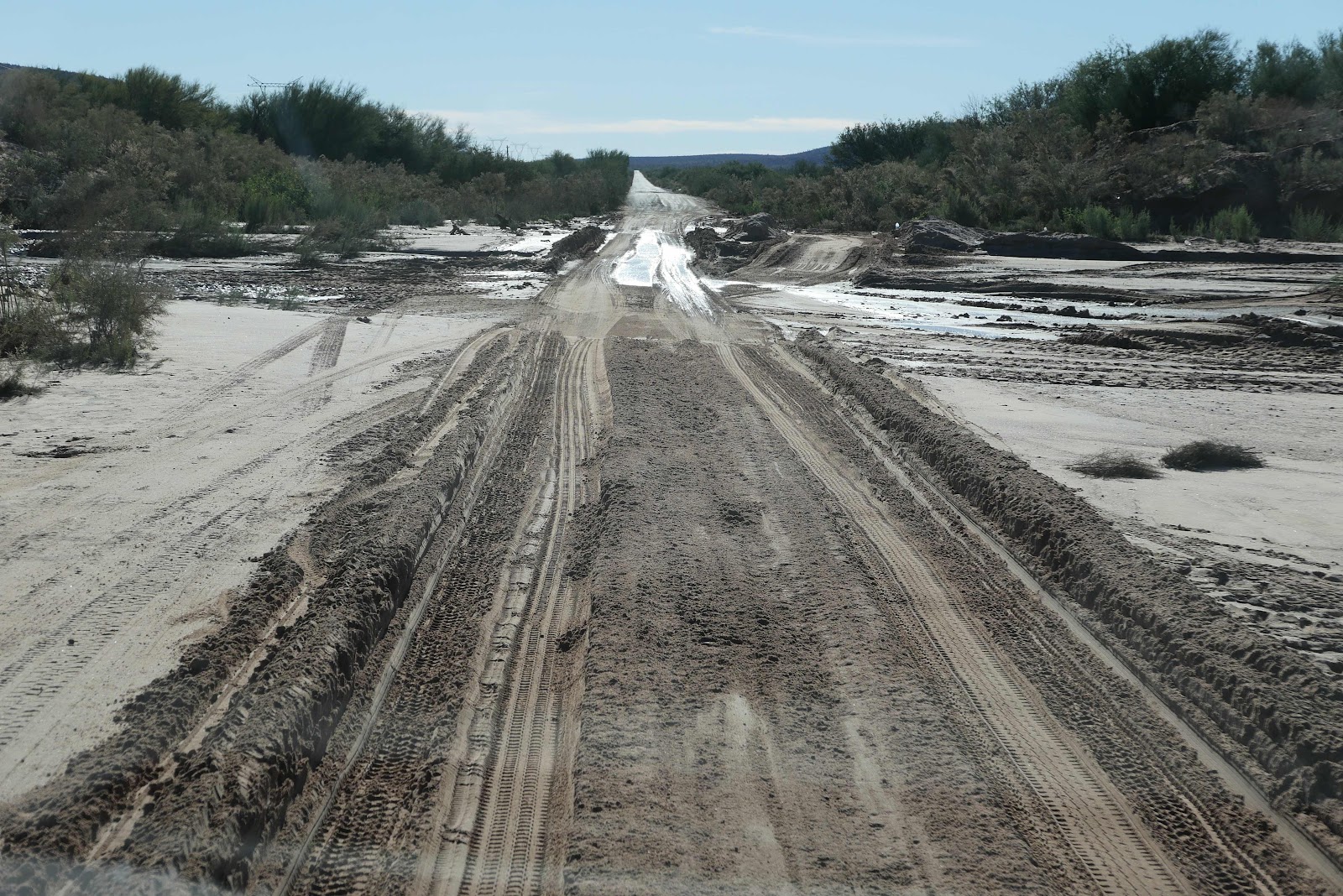 We got out the other side and looked at each. That’s why we were alone on National Highway Three. The Cuota (toll road) takes an hour more than the free road which is never the case. Obviously we took the free road. Silly us. 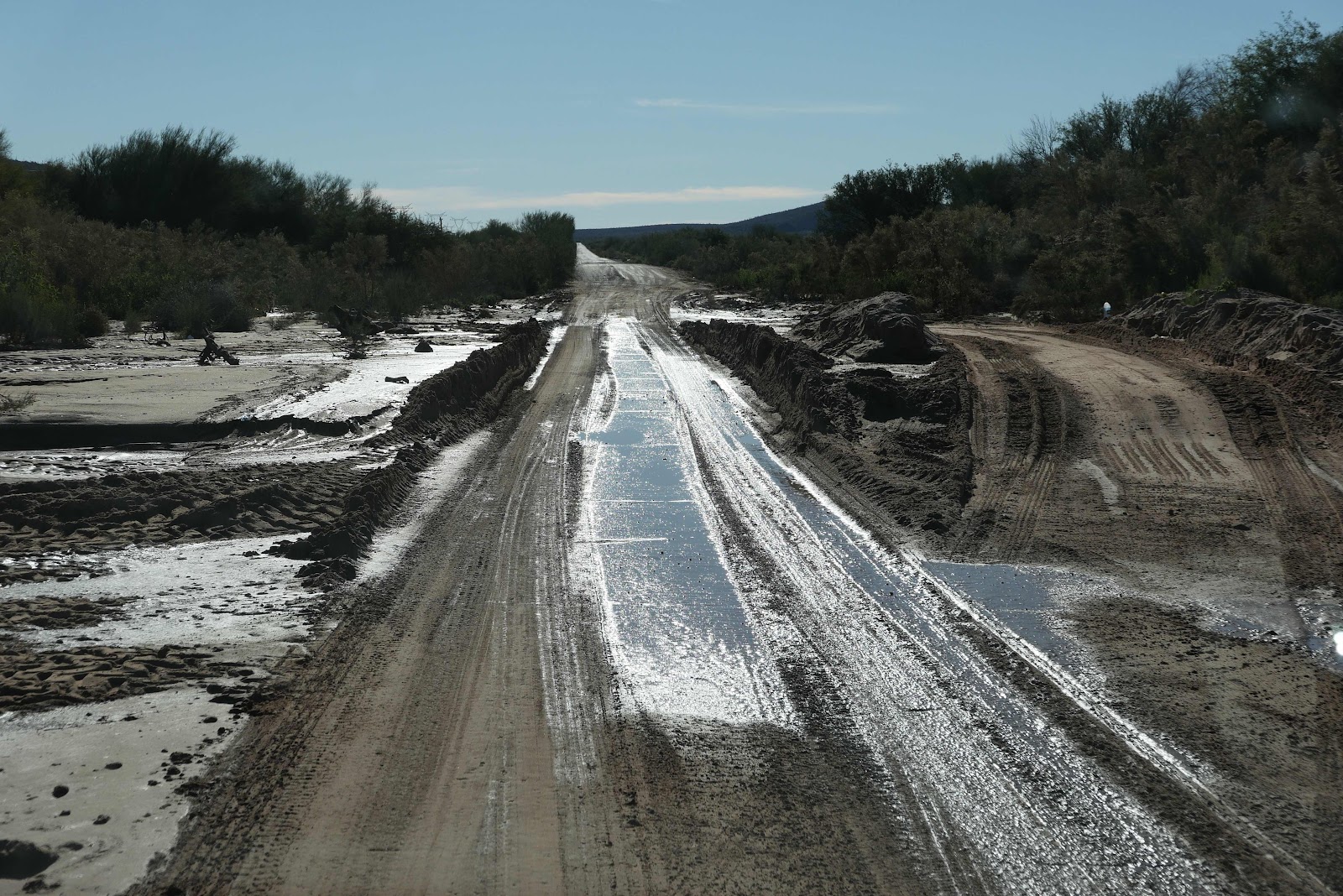 We then met this huge truck bowling toward us. Our first thought was: how is he going to get through that mess?  Our second thought was: if he can make it here from Hermosillo we should be fine. That was sn exaggeration. 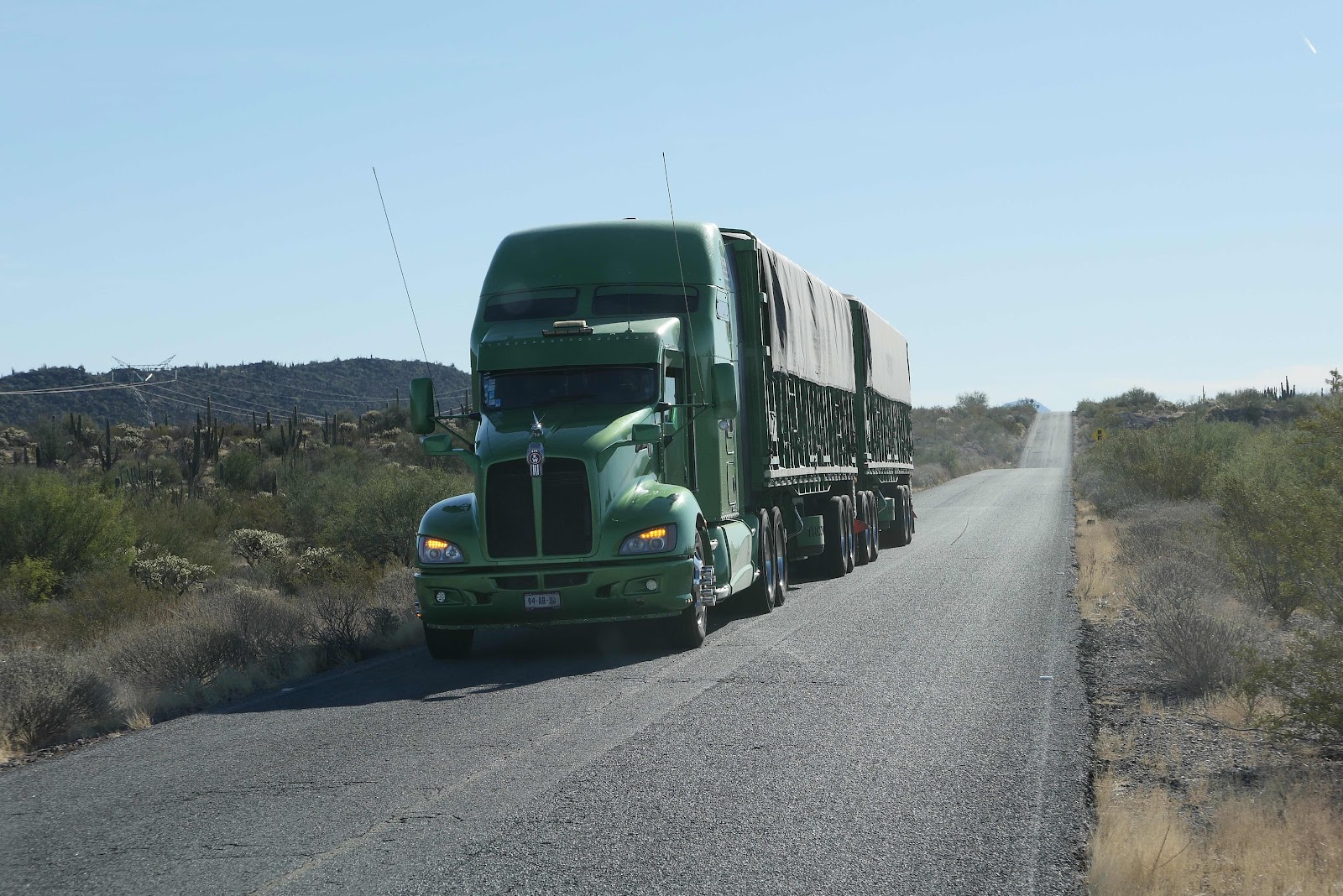 By comparison this water crossing simply required us to take the bank and lean over a bit. Quite a bit. In the US a puddle on a road usually indicates a few inches of water maybe. In Mexico a hole could be six inches or six feet deep.  No telling. 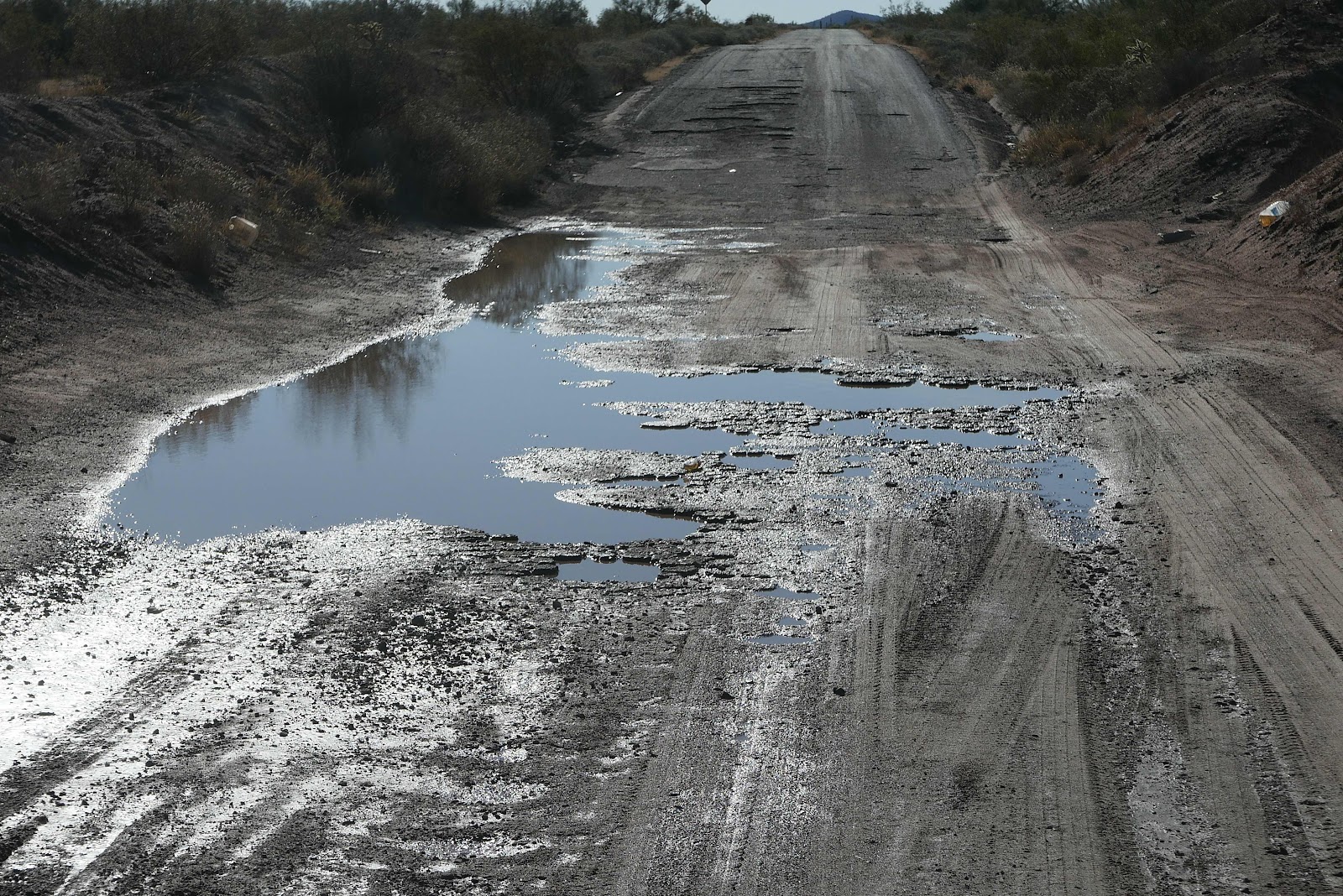 The potholes lasted 60 miles or so and they were terrible. The road in the distance might look smooth but as you closed in you could see black specks developing and I soon learned we couldn’t drive more than 35 mph and mostly less than twenty to give me time to take evasive action. 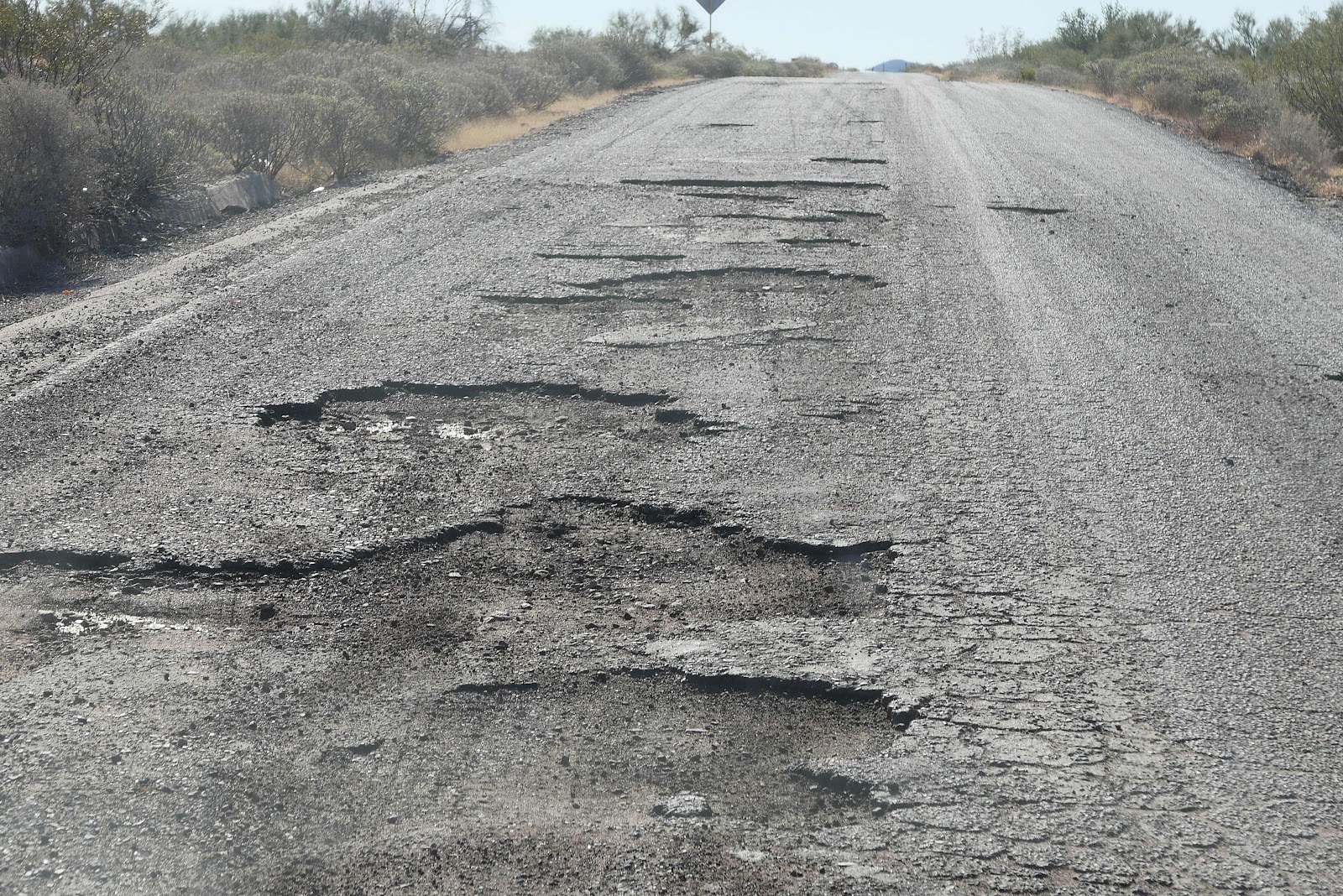 Often I would come to a halt and drive around holes or even through them if they were wide and clearly
unavoidable. The agony went on forever, it seemed. 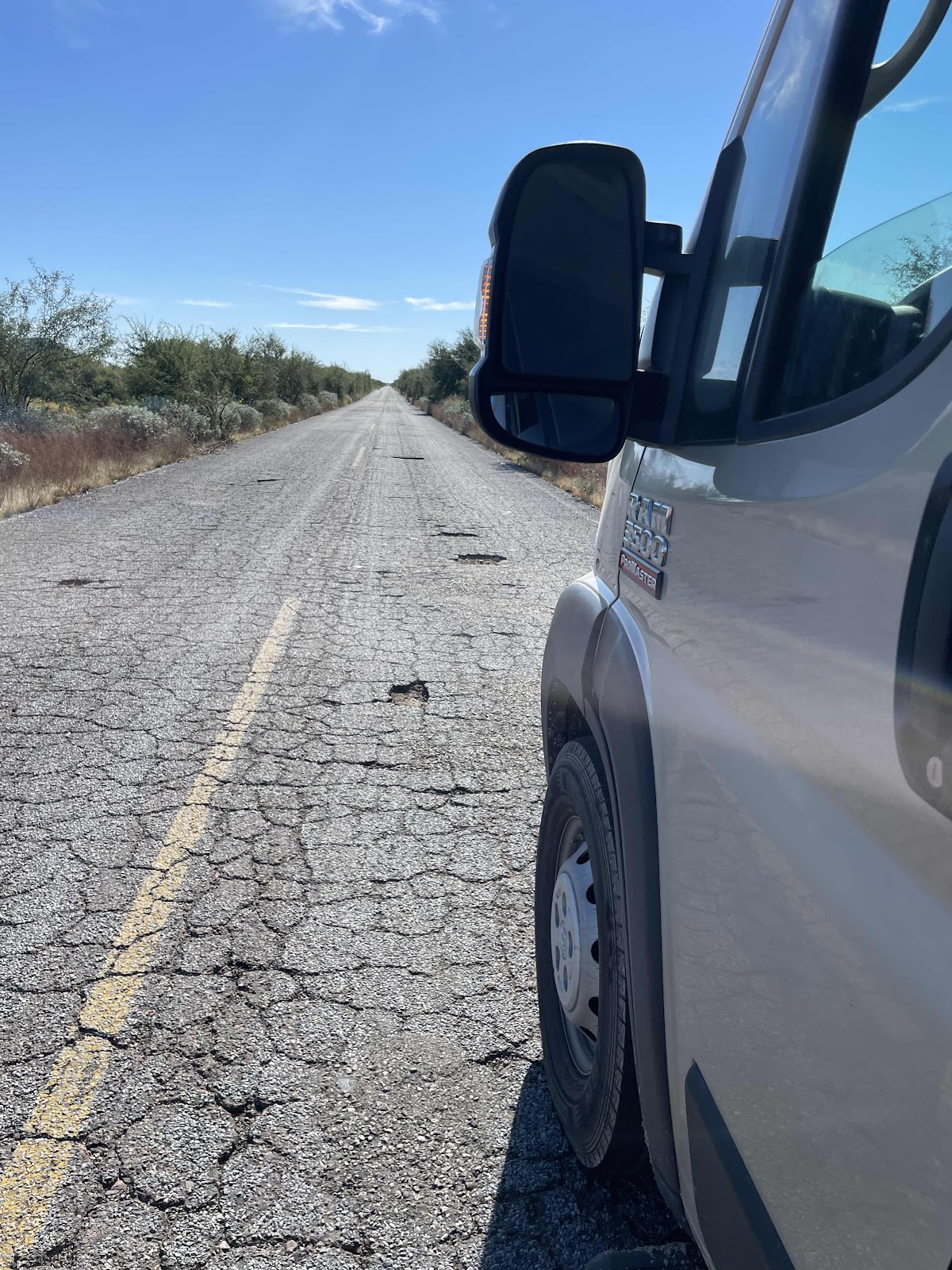 We stopped to give us a break and for Rusty to get an explore in the desert he loves so much. Layne made me a second cup of tea and I spent useful time trying to take a selfie. Four days without a shower and dry desert air does my hair no good. 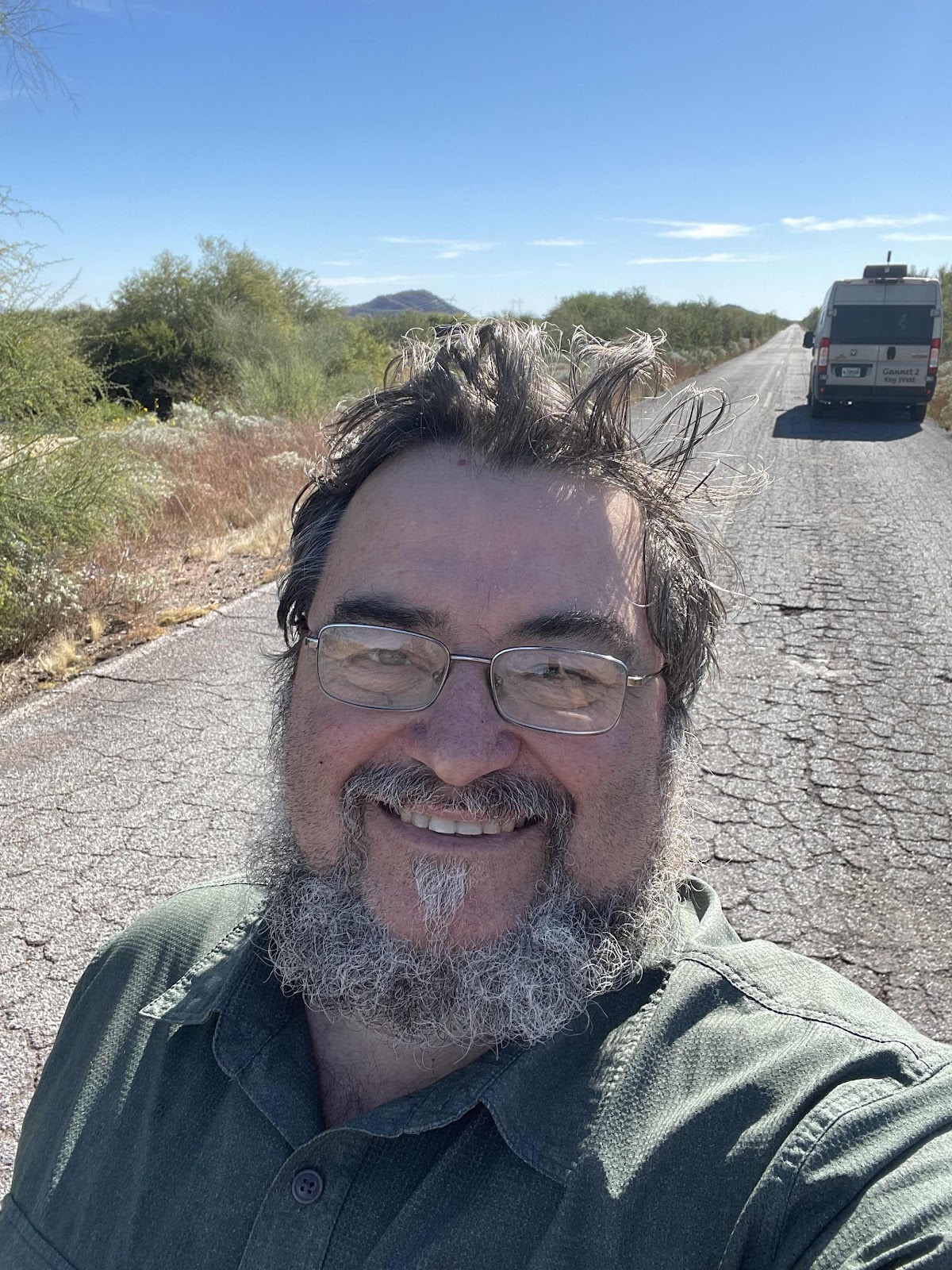 Rusty had a blast disappearing into the shrubbery while I kept an eye on the non existent traffic, visible for miles. It was a surreal silent spot. Nowhere to pull over so we stopped in the road. Use the flashers Layne said so I did though I wasn’t sure anyone would notice or care. Imagine this scenario in the US. It would confuse American drivers no end poor dears. 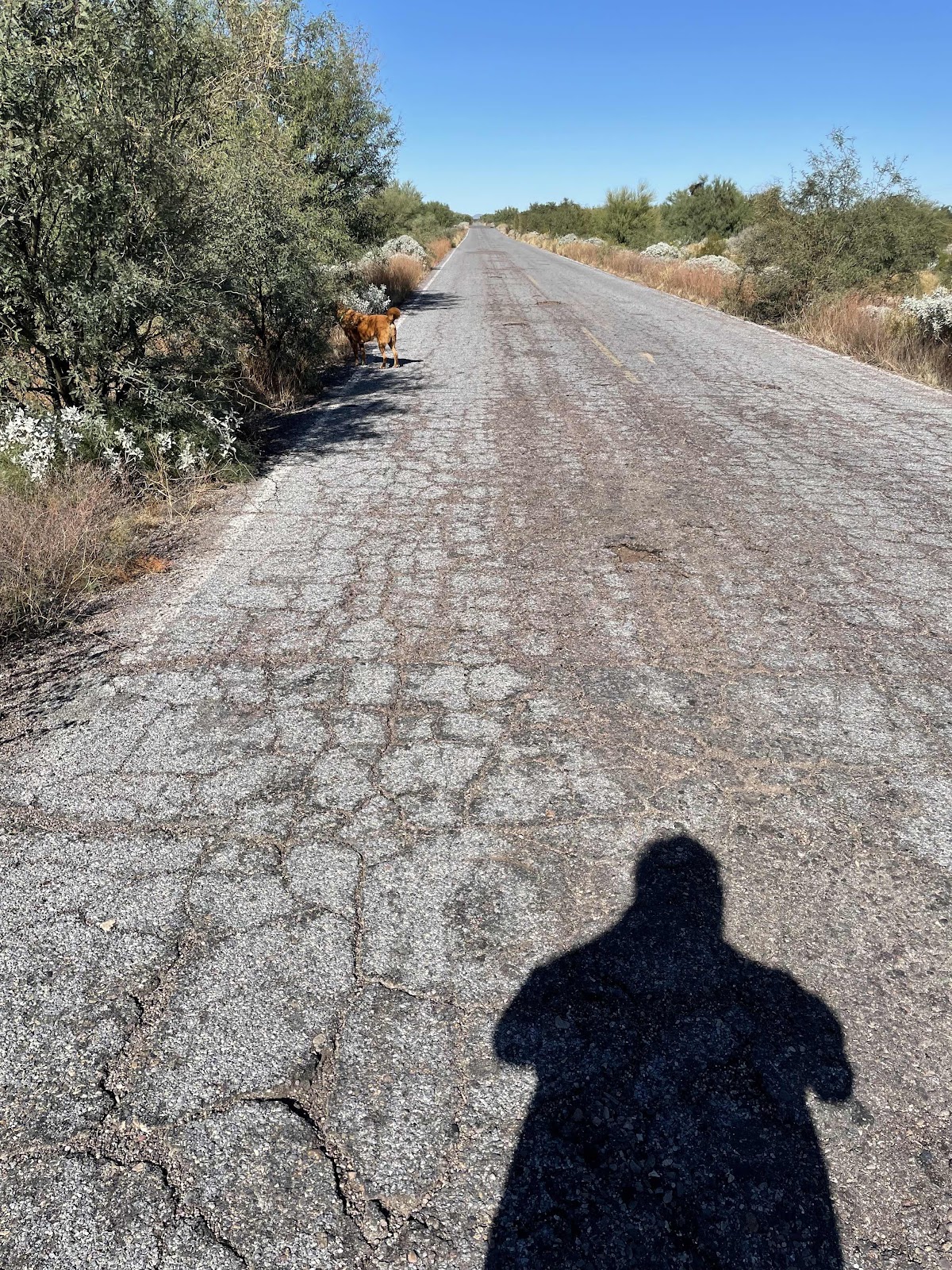 I promise the road was a pincushion of holes even though you can’t really see them. 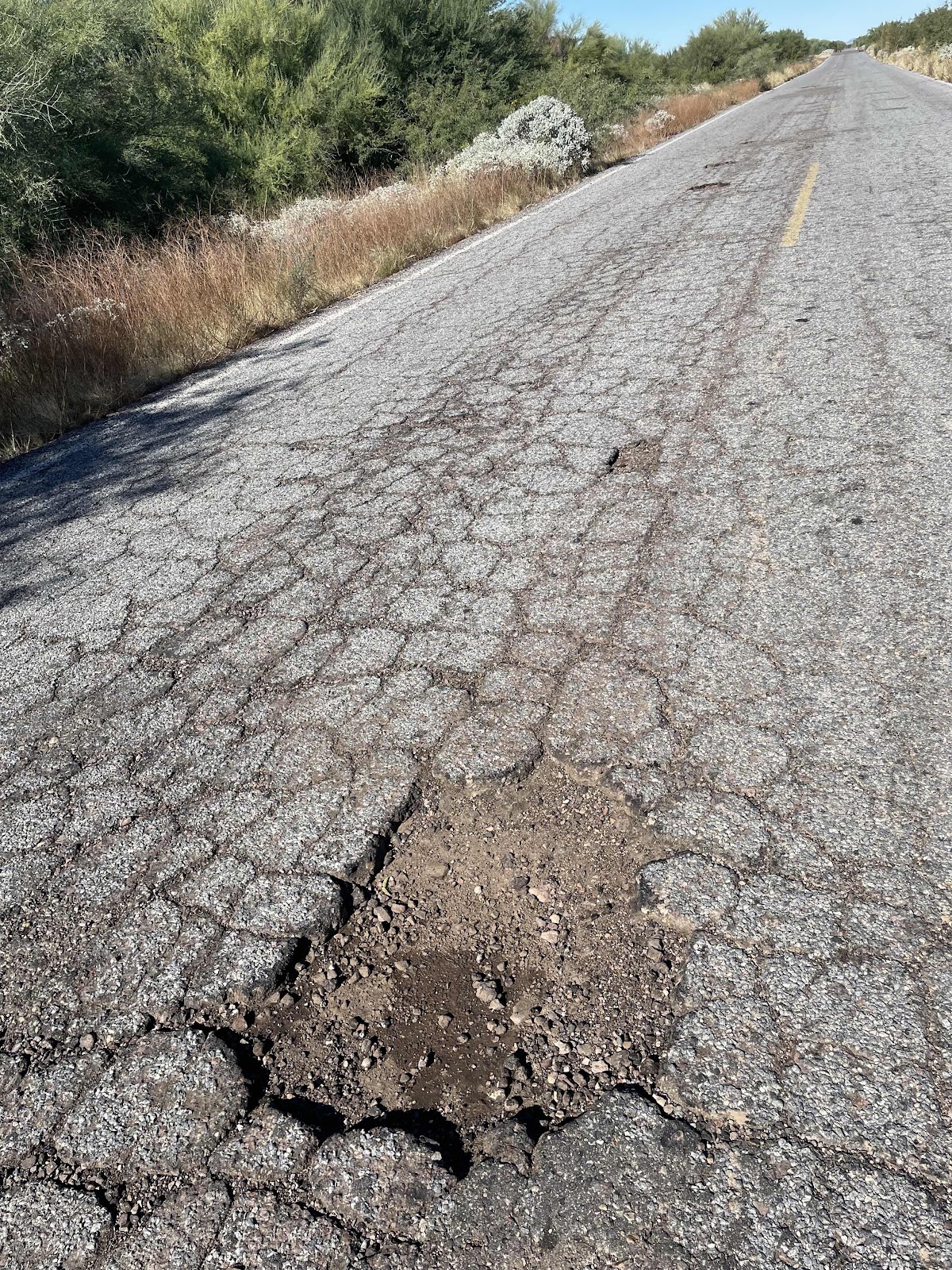 If I accidentally took them at speed there was some horrible banging from poor old GANNET2. 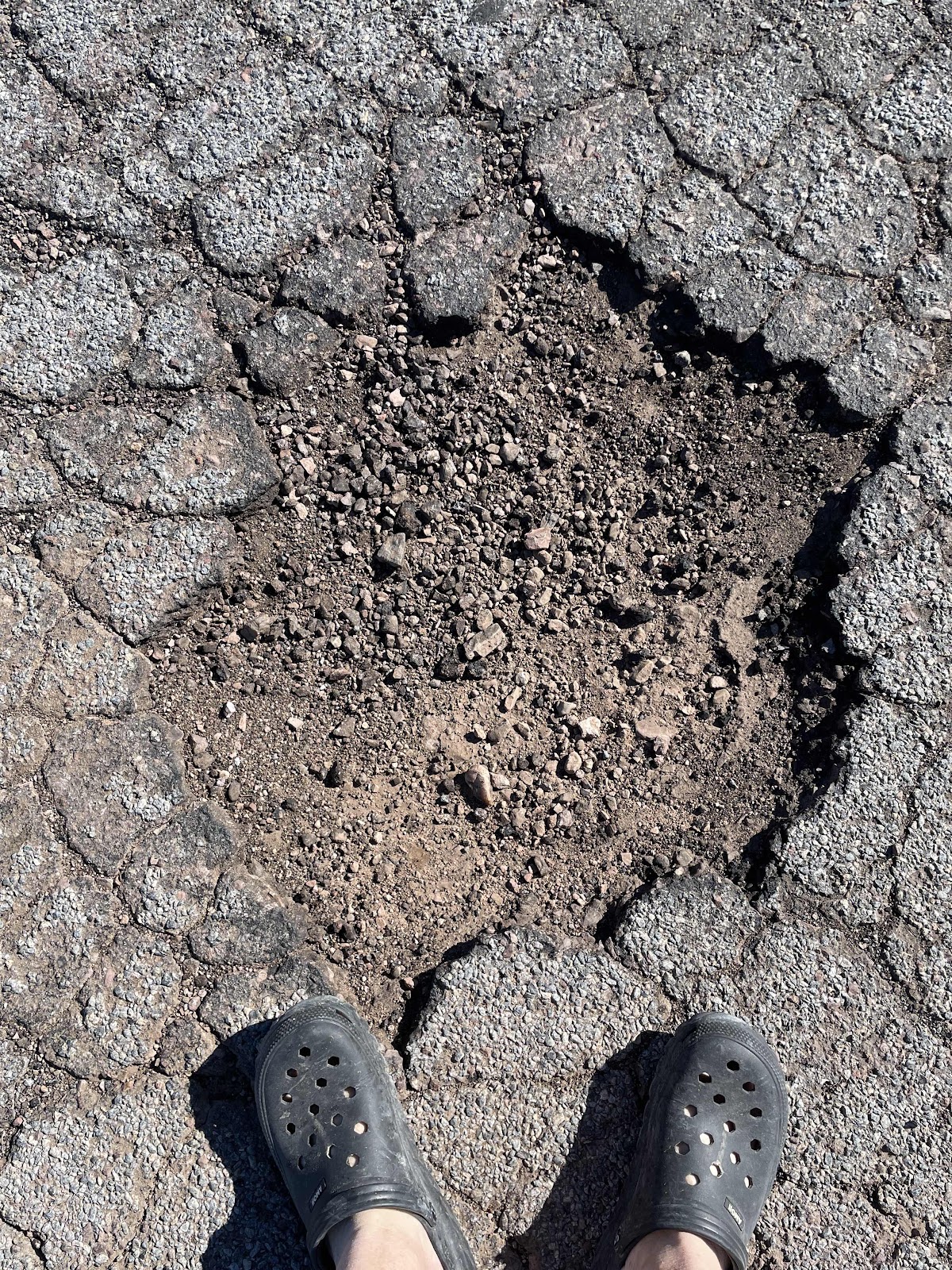 And to add injury to insult they’ve stopped making mens 13 Crocs in pink. Probably just as well in Mexico. 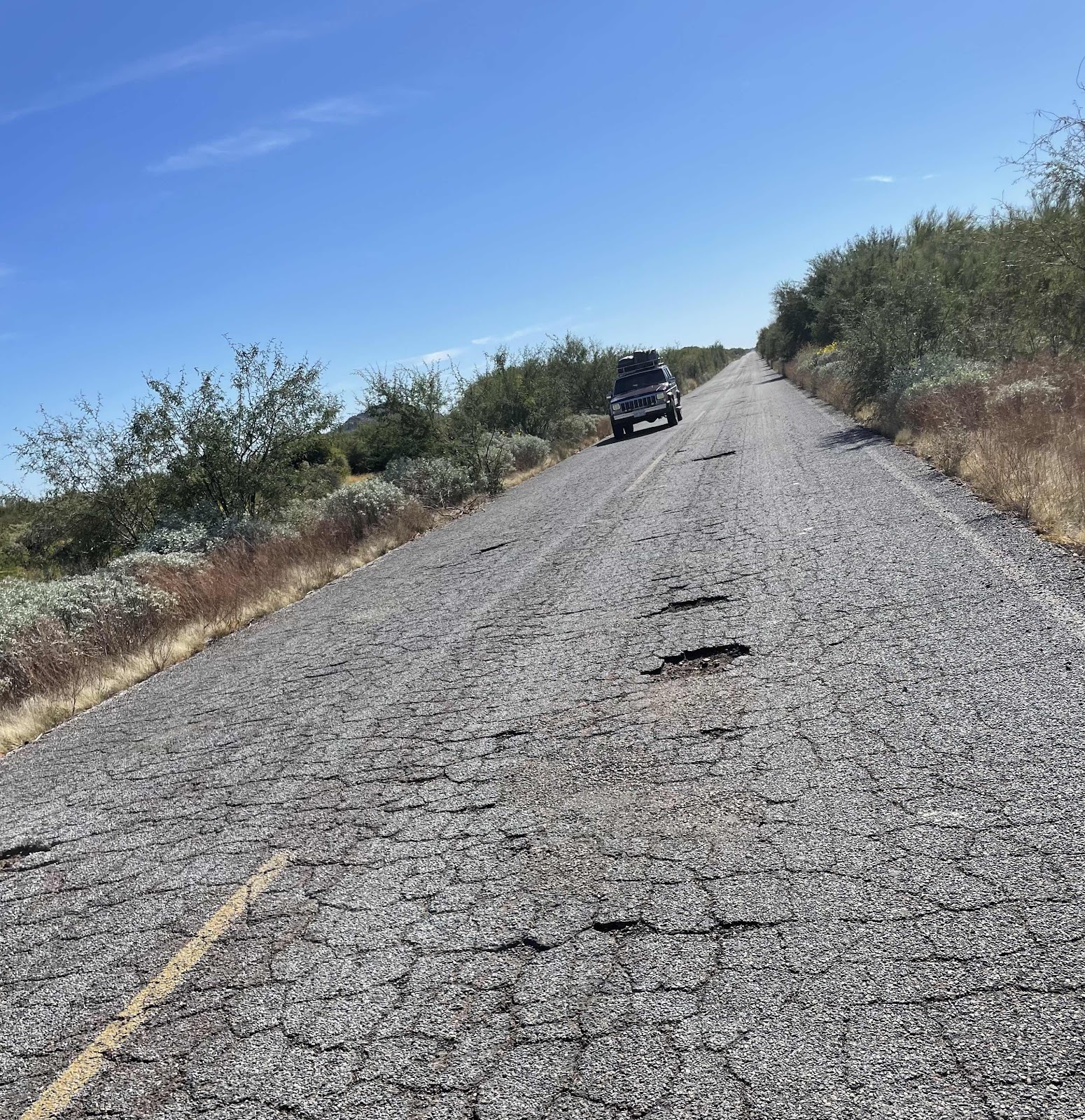 One other exciting wrinkle is the technique used to mark road problems of a greater order of magnitude. A sinkhole or collapsing bridge support or a failing culvert will be marked with a pile of dirt, or rocks, or sticks with bottles on them,  or pieces of orange plastic from broken road markers. You see that and you slow down if you are new to the area. 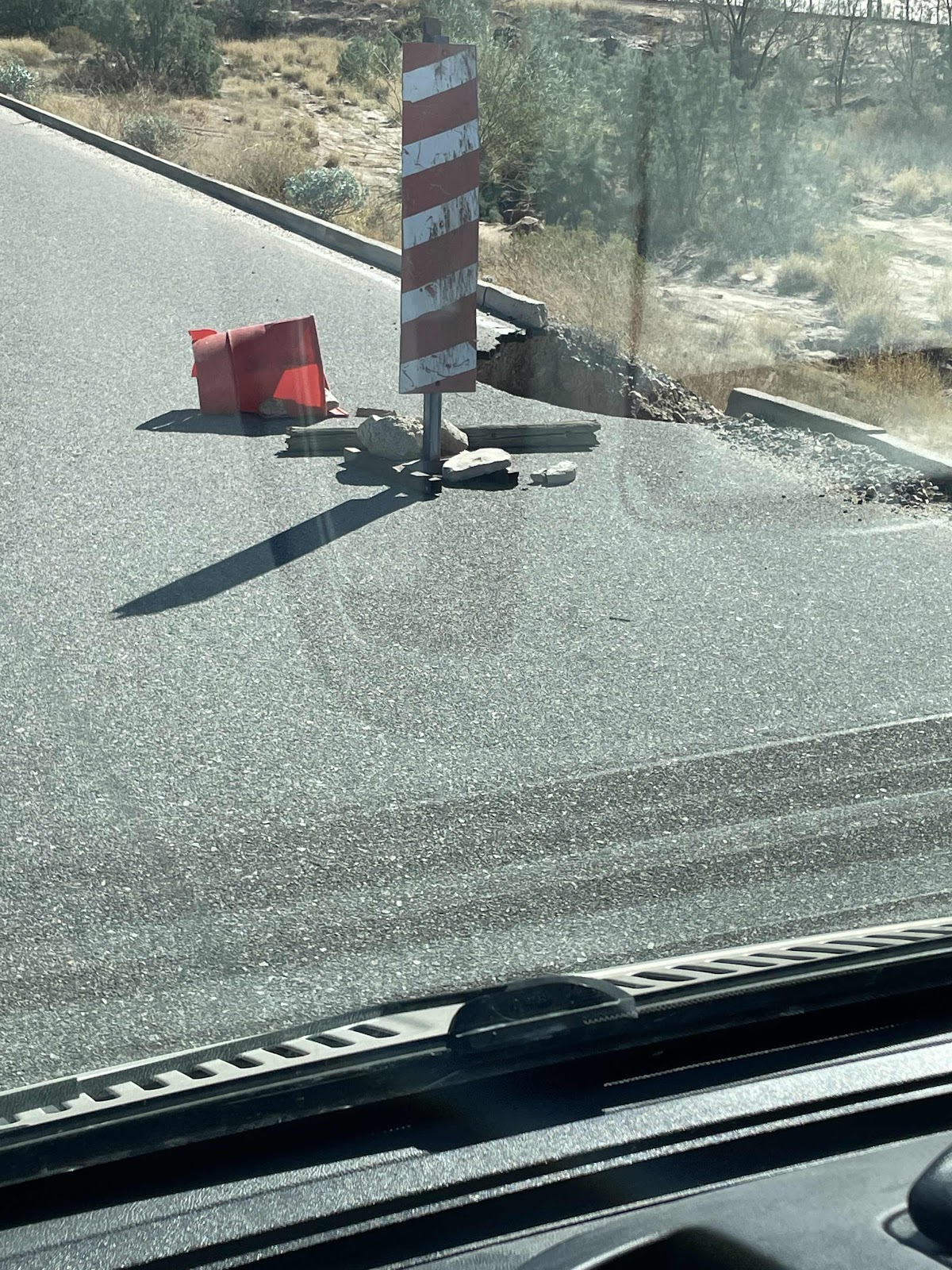 It might have been a total coincidence but at the exact point where big farming concerns were operating the road miraculously improved beyond all recognition. It was as though road building comes in response to the wealth of the landowners. Unworthy thought. 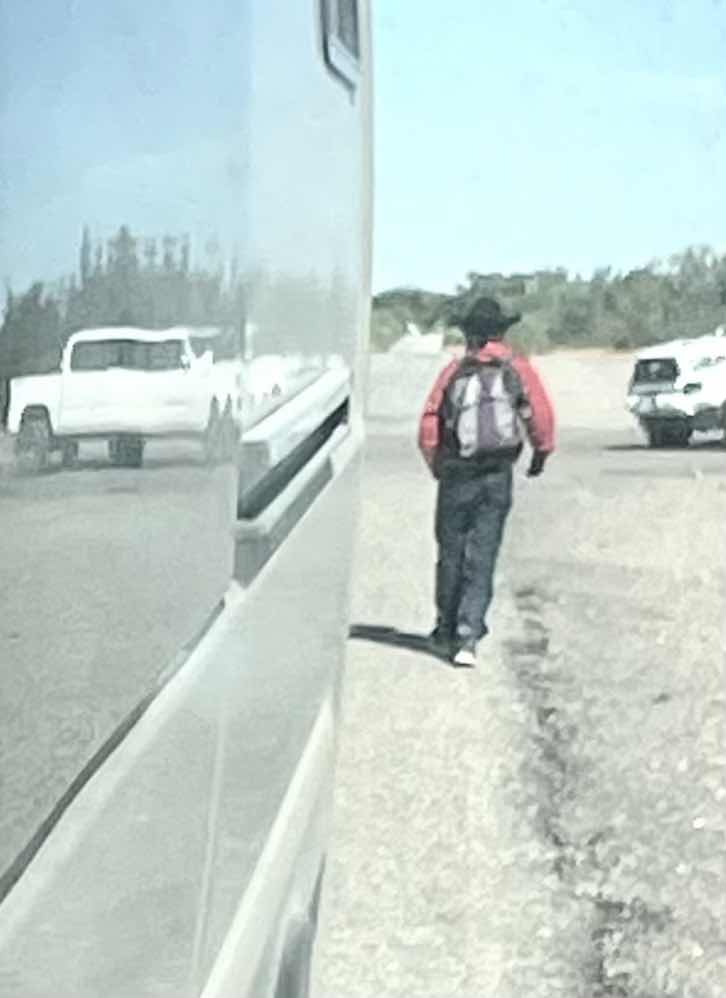 Meanwhile we spotted a dude with his thumb out. He could either have been a narco trafficker out to murder us or he could have been Alfredo who missed the bus and needed a ride to his farm work site miles away. We delivered him and as we did he explained he goes to work Sunday and comes back Friday and spends Saturday at home. He works on a farm currently raising watermelon (sandia) and squash (calabasas). Not an easy life. We caught a picture as he marched off to work. A tough old guy. 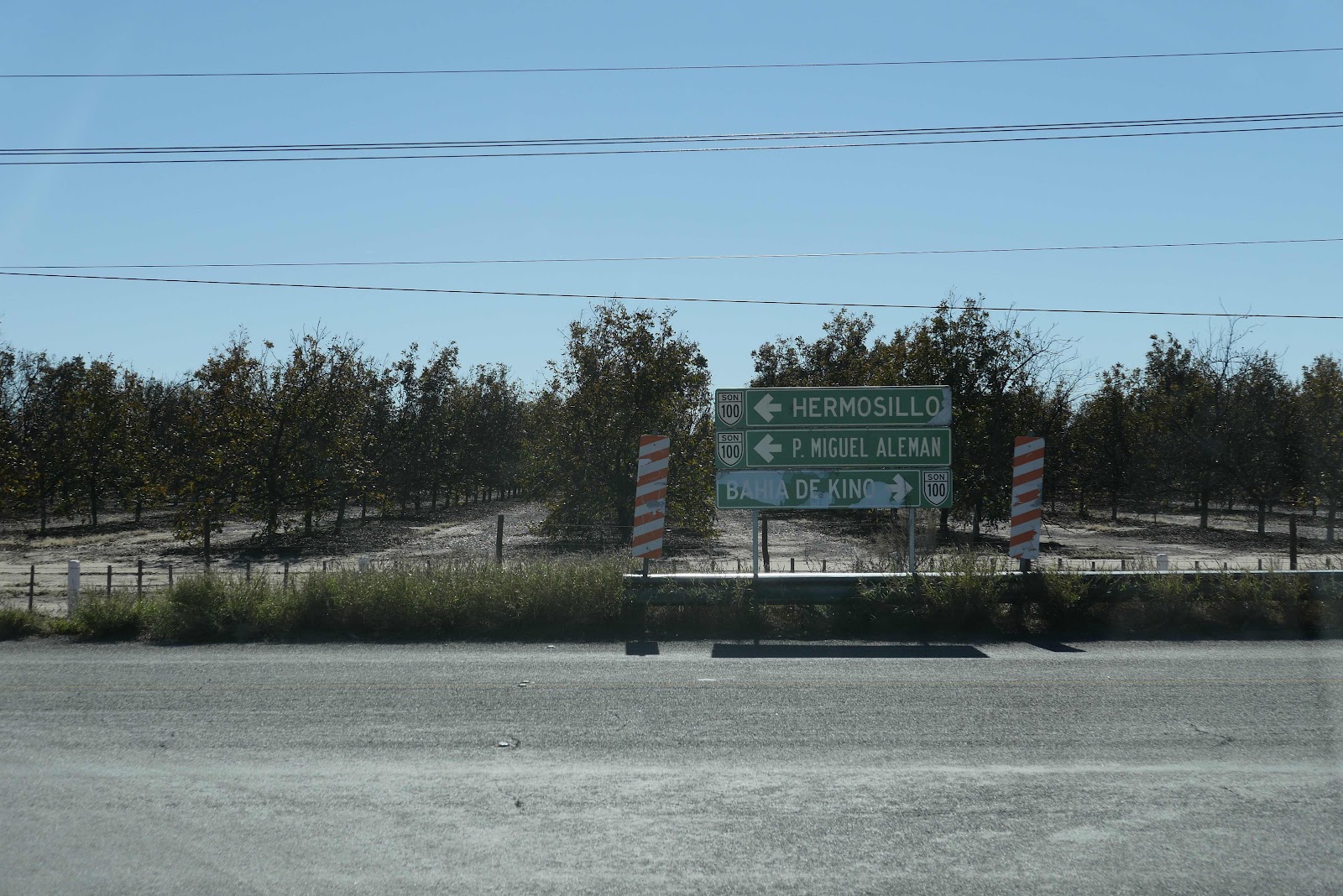 After we completed our shopping we set off for the road to Guaymas where there was a truck stop rumored to offer hot showers as reported on the iOverlander app. On the road we saw a man walking and we gave him a ride across the desert. Eric’s story was that he is from Chiapas a southern. State traditionally ignored by the central government. He said quite bluntly racism made it hard for him to get work but he was out looking. We got him across 70 miles of desert in a little more than an hour. He was so tired he fell asleep on the floor behind our seats. 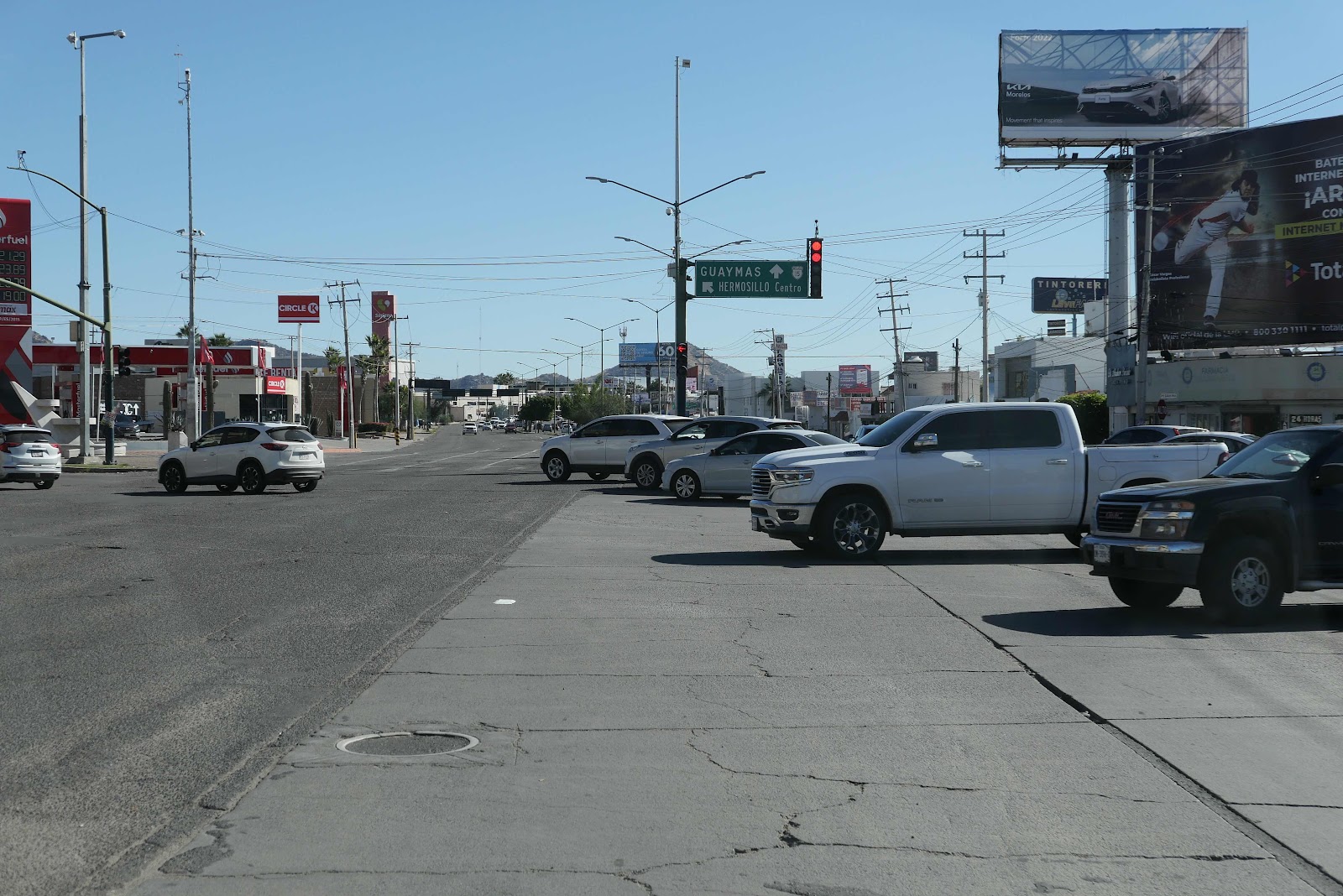 Rusty interestingly turned his position between the front seats and kept a firm eye on the intruder. We were quite impressed. I guess he loves us. We dropped him off and have him some money food and a bottle of coke we had been hoarding. Layne burst into tears as we drove back towards San Carlos. She has always had a soft spot for the underdog. 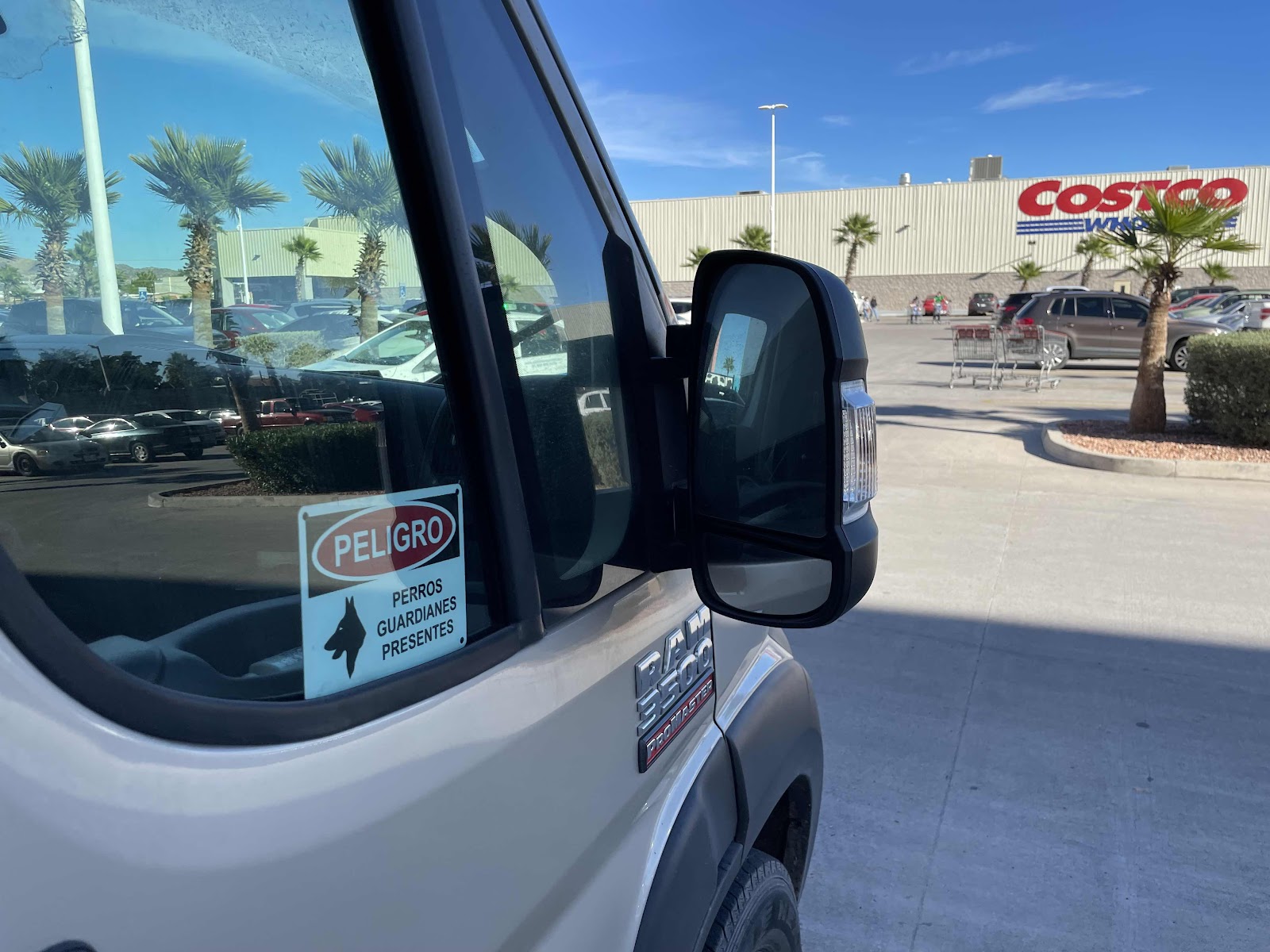 The truck stop had showed at three dollars each and provide your own soap and towels. Layne had on and off got water in hers but I got a nice steady stream of hot water. It felt great after five days of personal  dust catching. Hopefully it will be warm enough to use our solar shower if not here then further south. 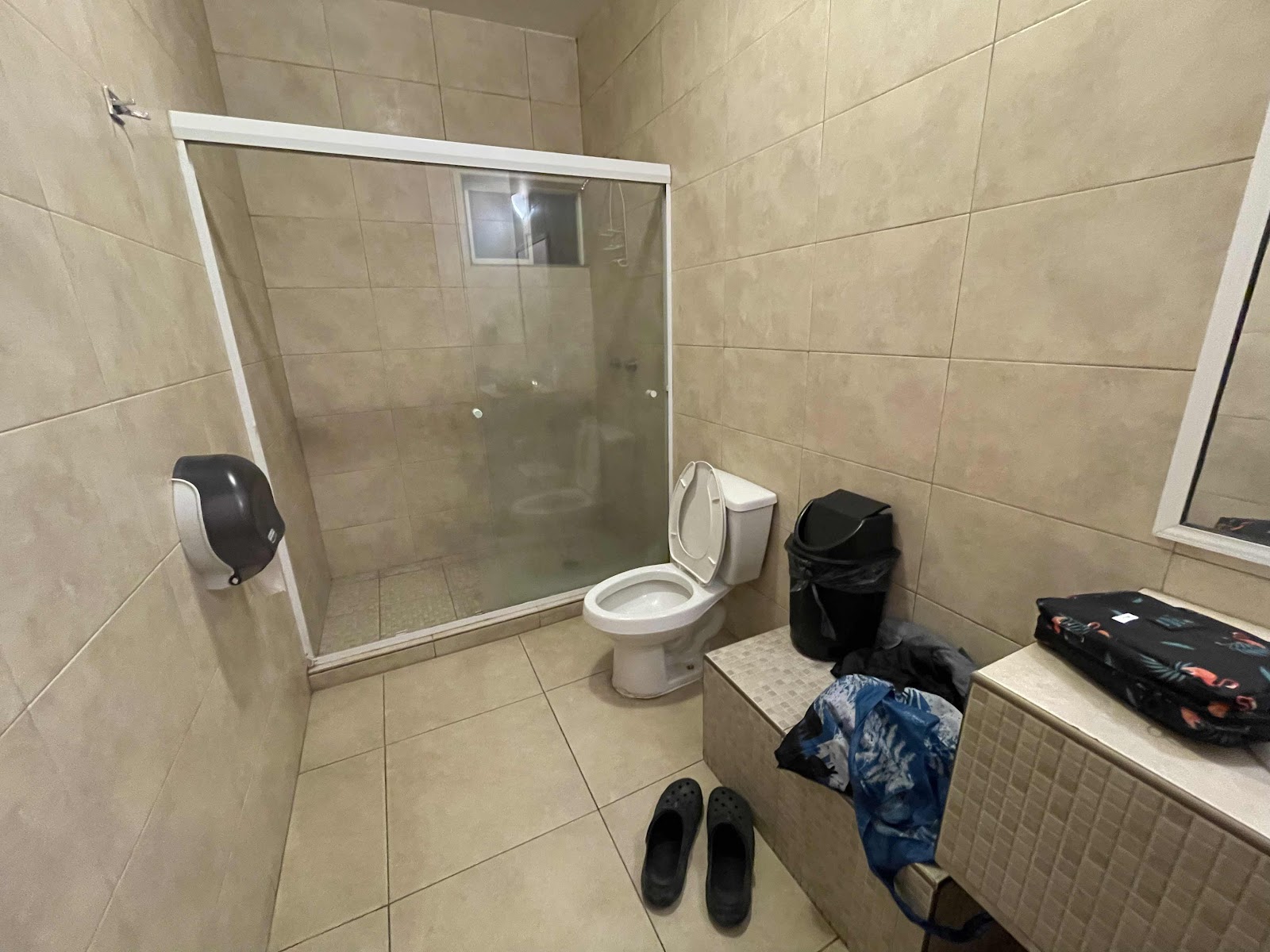 Our next stop we hope will be warm enough for us to stay on the beach in a wild camp north of Guaymas for a few days to relax and do some outdoor living. We are tired of the cold. We can handle it but we don’t enjoy it.
Posted by Conchscooter at 2:00 AM 1 comment: