Watching The World Go By

I sat myself down to give my hard walking dog a break. We chose a plastic chair in front of the former city hall at Angela Street. More precisely I occupied a resting spot generally used by the firefighters of Station 2 which is a decaying fire station still housed in the mouldy husk of the city hall building. A new fire station is to be built in the new parking building that is supposed to be rising, Phoenix-like, in the construction site next door. 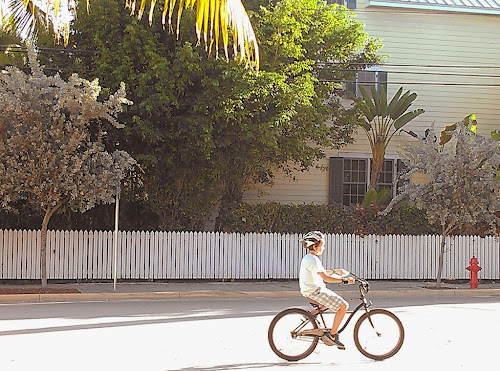 As we sat and watched the passersby I have a tendency to think, and indeed owing to I know not what, I have a tendency to over think. And in this town when one sits and thinks there is much upon which to cogitate! My dog compensates by not thinking too much while resting. Cheyenne is properly measured in all things. 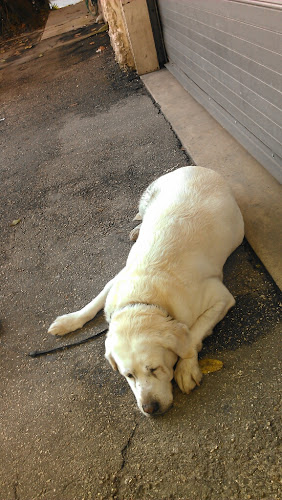 The newspaper ran editorial recently on the subject of noise. Most of the editorial is not ground breaking, pointing out that "this is a small island" (no really?) and airplanes fly overhead, without asking why the commercial runway is oriented right over the city, and on the ground lots of noise is necessary to permit the wheels of commerce to turn, without explaining exactly why. Then the irritated author of the leader column takes issue not with leaf blowers, but with scooters with damaged or altered mufflers. Clearly the author is in the habit of strolling Flagler early in the day and wage slaves making their way to one of their many jobs is irritating this august personage. So even as the city commission turns to making revisions of the noise ordinance the newspaper wants to see scooters stopped and checked for muffler violations. Who I wonder is qualified to say which mufflers are authorized for use on say, a Yamaha Zuma? Ah, but that is just a detail and personages do not deal in details. 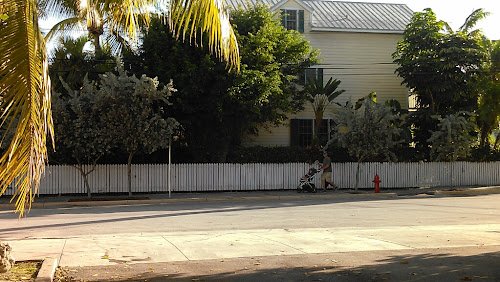 I am an avid rider of motorcycles and scooters of course, but I am not an avid customizer and I dislike noise, so I am no defender of loud mufflers. I also resent noisy mufflers when they used to support a claim that "loud mufflers save lives." Training and paying attention saves lives if you ask me and making noise just gets people like me and the author of the Citizen's editorial all riled up. The difference between me and the newspaper is that they are important and I have no doubt when the question of noise comes up it won't be loud music or leaf blowers but suppression of "bees in beer cans" which will become the priority. 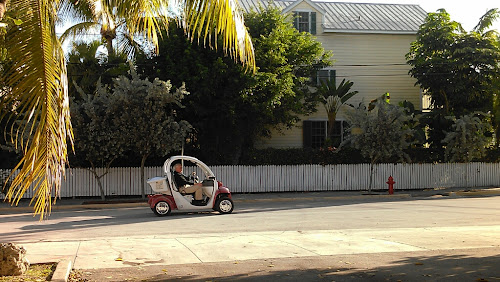 Noise is one of the issues that strikes newcomers to the city and as sensible as city residence might be the fear of noisy neighbors fills me with dread. It takes special training to learn how to live in a tight knot community like Key West. And most people who move to Old Town have no idea how to live and be civil in each other's pockets when your million dollar home is only offset by eighteen inches from your neighbor's grossly overpriced shack. 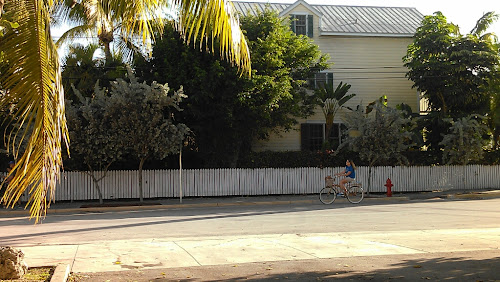 If your neighbor has a short term rental license your home may be next door to party central. Eighteen inches away. Apparently the Citizen editorial author does not suffer from these problems as it's "bees in a beer can" that need immediate attention. Whatever, I suppose it can't hurt, unless the owners can't afford to repair them but hey, scooter riders are just out having fun of course! 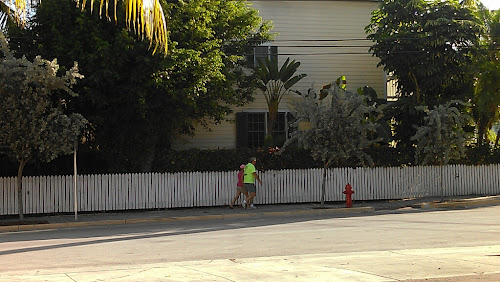 The other page in the paper that I greatly enjoy is the Citizen's Voice, a column of anonymous contributions that regularly irritates the people in charge who call on the paper to abolish the people's voice. Despite many unwelcome changes at the paper, abolishing letters for instance, the voice holds out. In the same edition of the paper the first comment complains of noisy leaf blowers, while the second complains of slow drivers in the left lane (my pet peeve!) Key West Diary: For Pity's Sake! The third comment attacks Key West PD for not catching a notorious prowler plaguing homes around the cemetery, all standard fare for the Citizen's Voice. 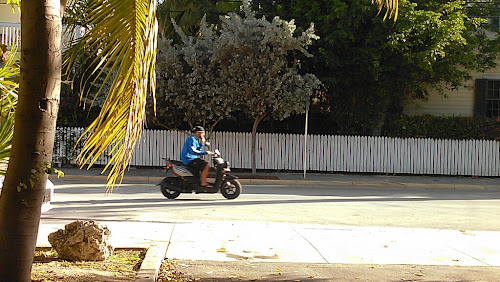 Rental scooters are limited to 29mph as state law limits "mopeds" to thirty on flat ground so they lack the kind of get up and go that modern traffic sometimes calls for. They are properly mufflered but renters do like to beep their blessed horns as they express they joy at being on vacation in winter sunshine on a toy scooter in a town devoted to play. 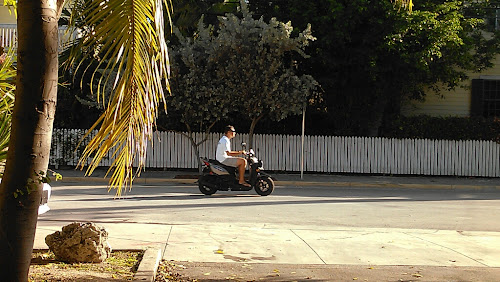 I do find it massively annoying when locals whinge about "having to go to work" and I try not to do it because after all no tourists means no money, at some level we all understand that, but Good God Almighty, do you suppose tourists could cut us done slack dimply because they don't have to be anywhere? Nah, not a bit of it. It becomes something of an antagonistic relationship which is disappointing considering how much pleasure everyone seeks to mine from this small rock. 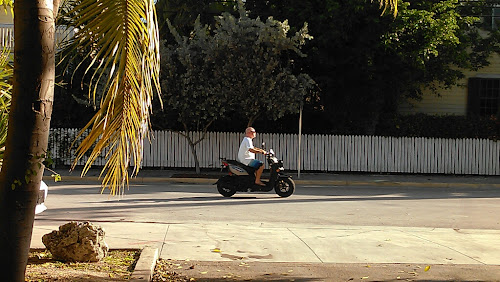 A lot of the comments lately have been busy attacking a city commissioner. I don't know Tony Yaniz nor do I know what to think. He gets stuck with a variety of comments, some praising him extravagantly for being the last bastion defending the people while others excoriate home for being a public idiot. The only sensible conclusion us that he is somewhere in the middle and pissing off people at either end of the spectrum is frequently a sign that a leader is charting a middle course. These days though everyone is polarized at all levels the middle of the road is usually seen as a bad place for a politician to be. 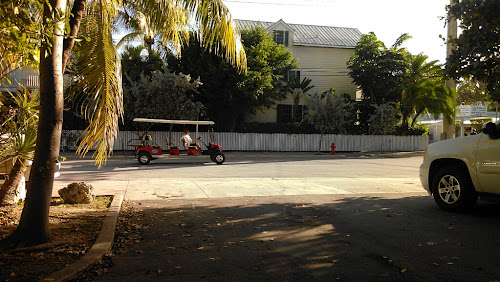 Then another city commissioner, a sensible thoughtful voice usually, has been the subject of a complaint that she built a fishpond without a permit. It's lawyers drawn at fifty paces now Commissioner's koi pond, garage draw complaint | KeysNews.com and the commissioner pointed out rather tersely that neighbor disputes can afflict anyone. Ah yes, life in paradise! 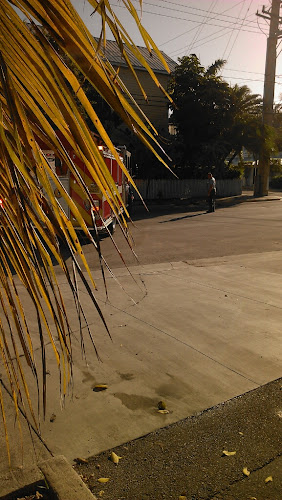 Happily the fire truck returned from a mission and we had to yield our place in the sun to their proper owners. Thinking had to cease for a while as we resumed walking. 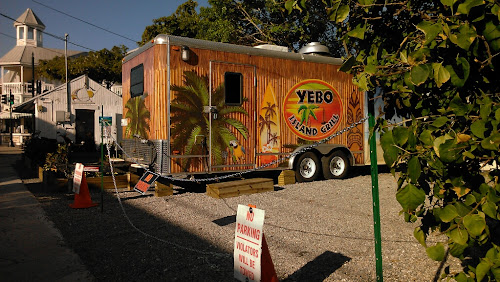 There's a new food truck at Duval and Angela so I checked the menu: burritos tacos and salads. Where have I seen that before? Food trucks are popular they say, though in a Key a West there are three now and none if them is a truck in any mobile sense of the word. Though why should they be in a small noisy island where everyone loves to get along?