I was walking Cheyenne but I noticed we weren't alone as early as it was. These Indian statues belong to another era and were the poor thing cleaned up a little bit it would seem kitschy rather than sad and neglected, watching the main drag from a filthy alcove. 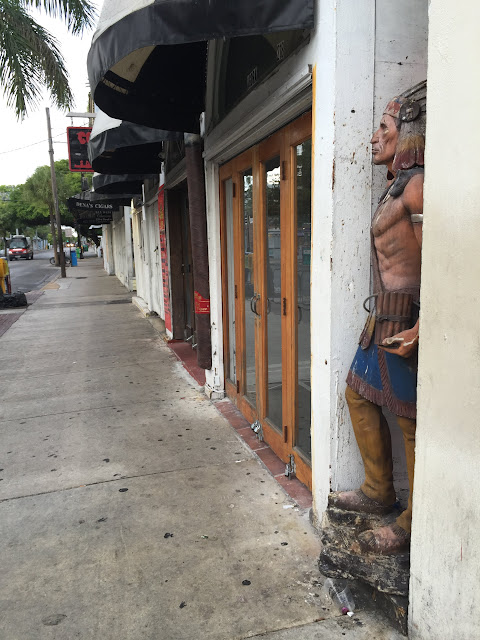 The rent being so high I suppose its hard to expect anyone to pay thirty or more thousand dollars a month from selling t-shirts and keep the store front looking respectable. Key West really is weird in that people will pay a fortune to buy a house here and the city down town looks like the tattiest  crack den that barely deserves to be occupied. 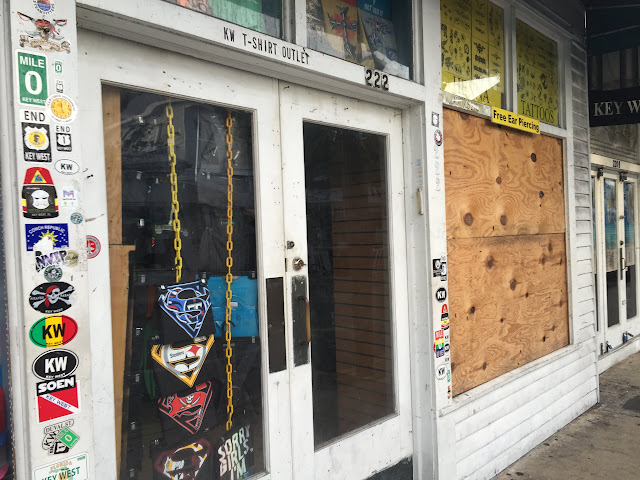 The parking situation is no great shakes but hotels aren't cheap and people come to Key West imagining they can sleep in their cars. And they do it so badly, making a big production of bedding down for the night and sleeping long after the neighbors are awake and can spot them. Subtlety is not a common trait among illegal sleepers.  The neighbors get incensed because these "campers' dump their waste on the streets and I've even come across people doing their ablutions curbside. Way to be obvious! 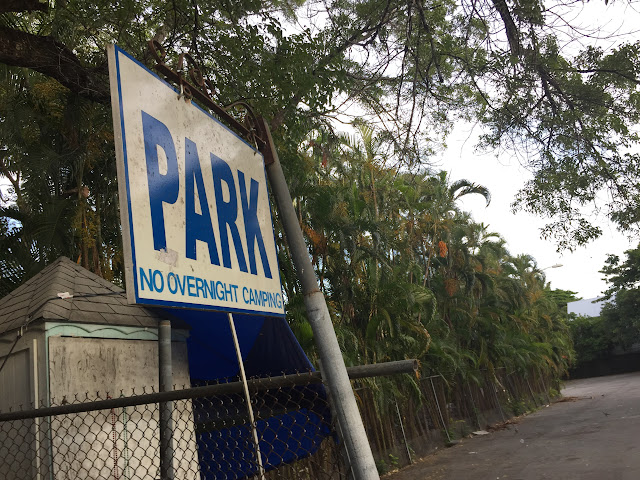 I think Trip Advisor is an unreliable source of information sometimes and when I look at the listings for top Key West restaurants I find, to my astonishment that the Duetto Pizza and Ice Cream Store is rated number one. Number two is the hastily renamed Bien, a sandwich shop on Eaton Street, formerly Paseo, and number three is Garbo's Grill which is visible in the picture below behind Grunt's Bar on Caroline. Number four is Santiago's which deserves to be number one and the next few are inconsequential at best. 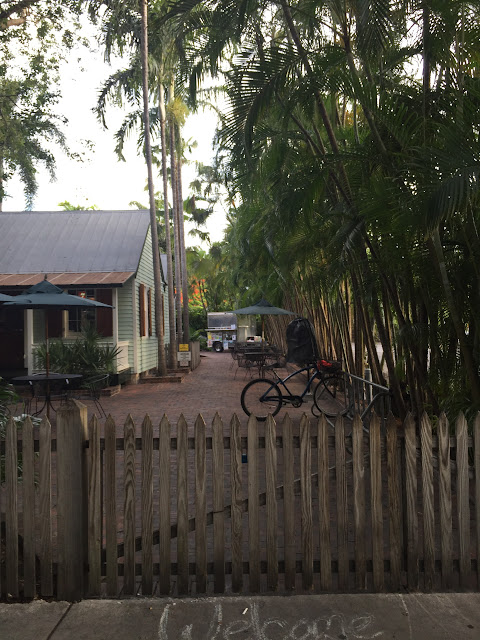 I am quite fond of Grunt's Bar as my wife and I were visiting Key West from California and we met my old anchoring comrade Curt there one night for a beer and a chat. I think that night under the stars, but more importantly under the rustling palms decorated with colored lights my wife saw the reason why I had a tendency to go on about Key West when we were sitting out freezing on a cold foggy summer night on a Santa Cruz beach. A few years later we arrived by sailboat and once again Curt and I were anchored next door to each other. 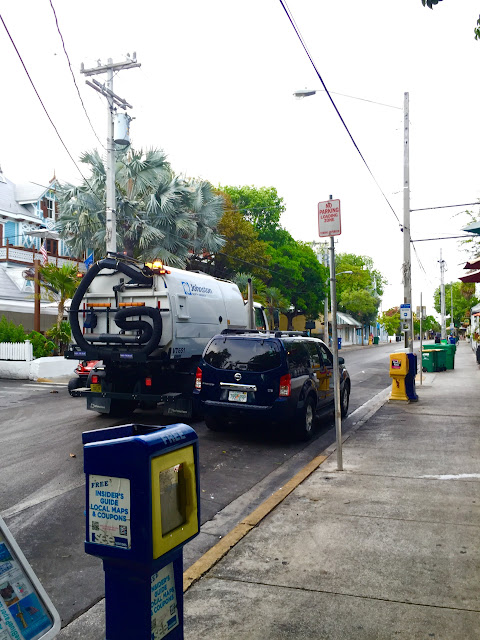 In keeping with all the other signage I saw there was the No Parking sign above, conveniently ignored thus leading to a stretch of Duval Street not getting cleaned. Nice job. In the picture below I was tempted to push on the rather ornate gate and see what happened. I resisted the urge. 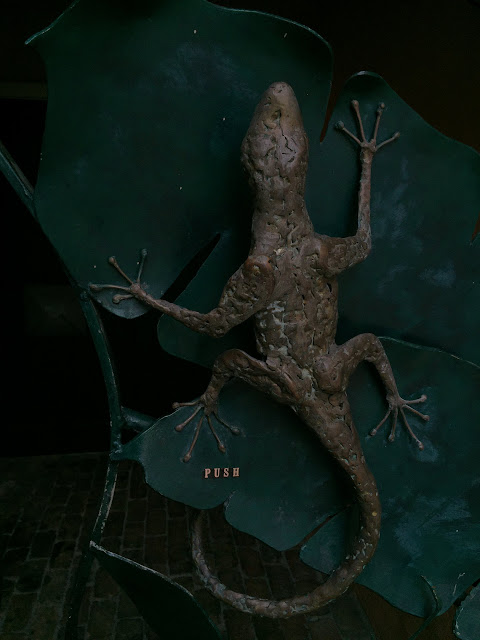 I cannot imagine the boredom of not only having nothing to do, but the killer part is not having anywhere to do it. I think the inability to squirrel oneself away into what would be truly one's own space would drive me mad in a life on the streets. Not everyone seems to feel that way. 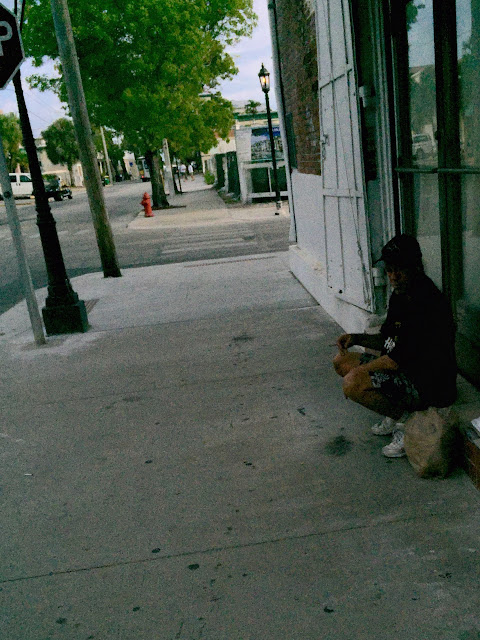 I find modern sloganeering to be laughable. Sugar salt and fat. Enjoy. 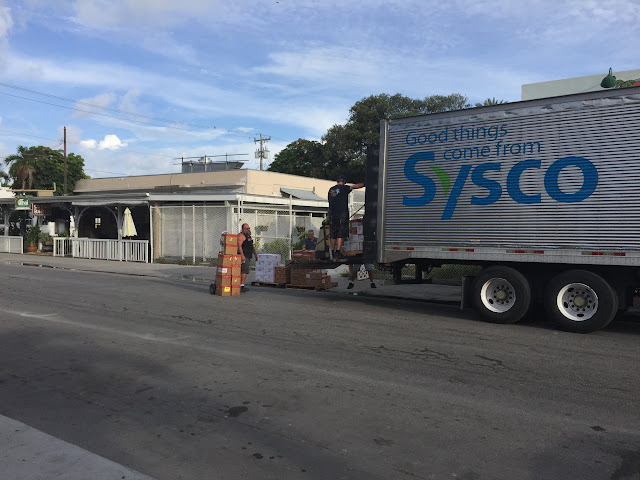 But the reality is these trucks are what keep restaurants in business, lowest common denominator cooking makes it possible for masses of us to eat out at prices we can afford. Oh well.
Posted by Conchscooter at 12:00 AM No comments: