Let me be quite clear: there were no alligators to be seen at the Blue Hole when I was there on Tuesday. This picture I took in 2014 and I put it here to not disappoint as everyone likes to see alligators apparently: 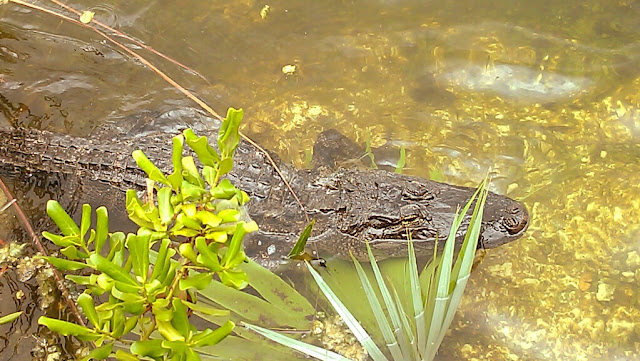 Here's another one from that same expedition: 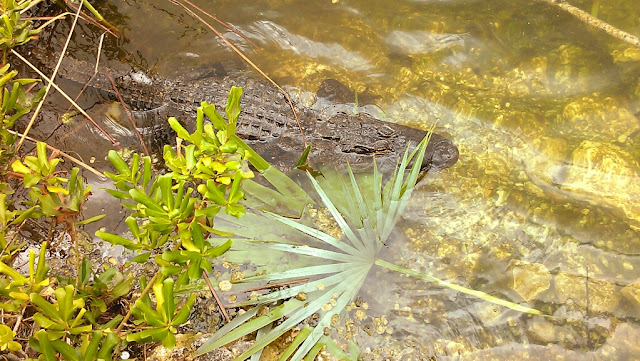 This week there were none to be seen. But there were lots of warnings: 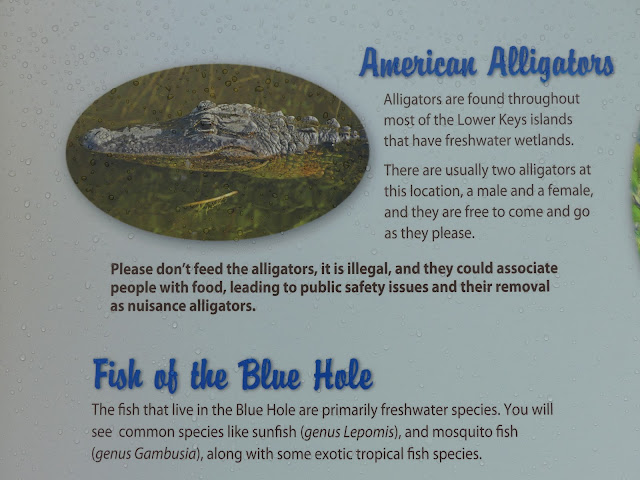 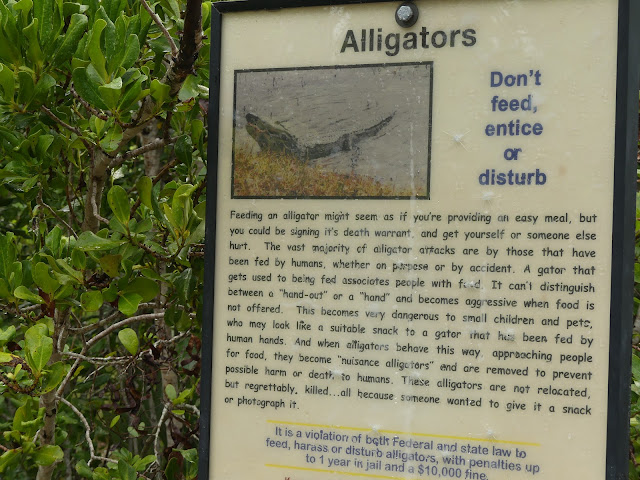 I wonder what people bring to feed the alligators? Table scraps? Stinky dead chickens? As for disturbing an alligator, even the relatively small ones that live here you may be doing the human race a favor if you are that stupid. Let it be enough to see and admire. However, as hard as I looked I saw none. 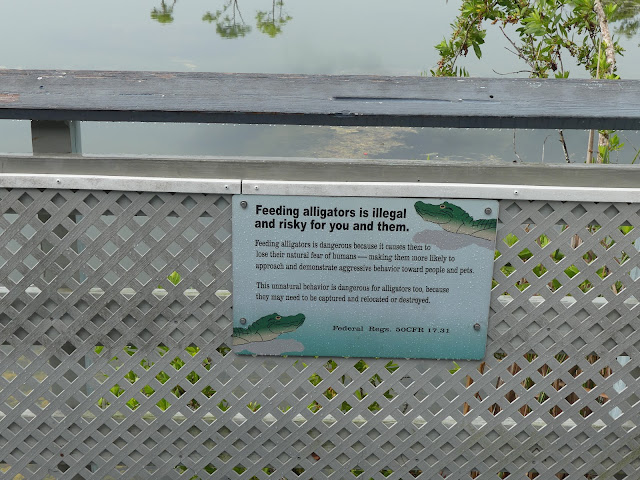 So, what is the Blue Hole?  It's a quarry that has filled with rain water and created a fresh water pond where no ponds or lakes are meant to exist. The limestone rock of the Keys is  porous and the salt water table is not very deep so fresh water lakes are rare except where humans have dug out the rock typically to create construction gravel. 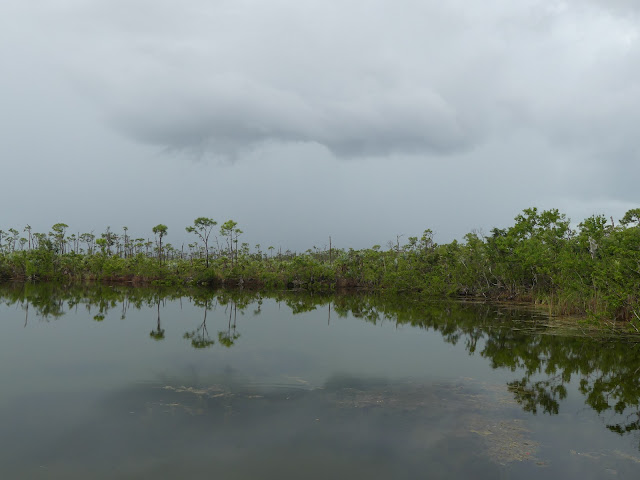 It is technically a hole. 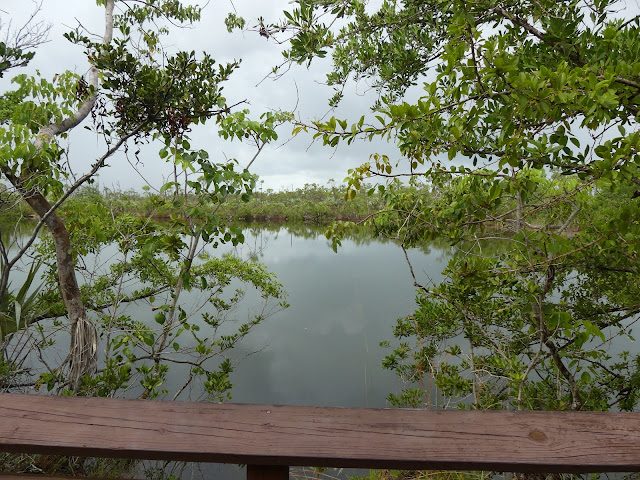 Though why it's called "Blue" I don't know. See for yourself in these pictures, the water is nondescript and not blue whatever else it is. 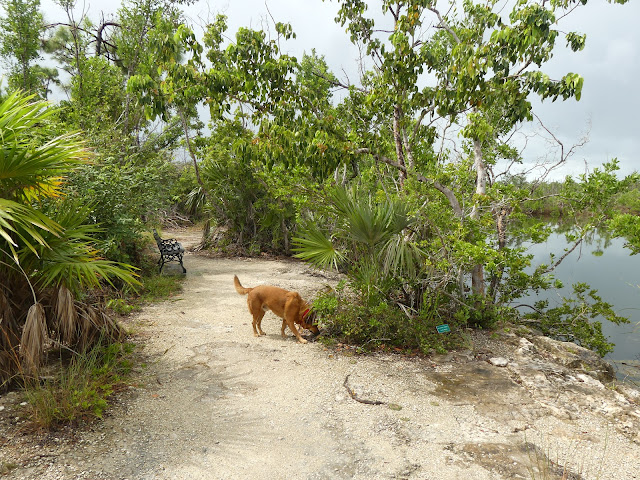 It's a pretty spot especially on a wet weekday afternoon in August when tourists are away and alligators rule. 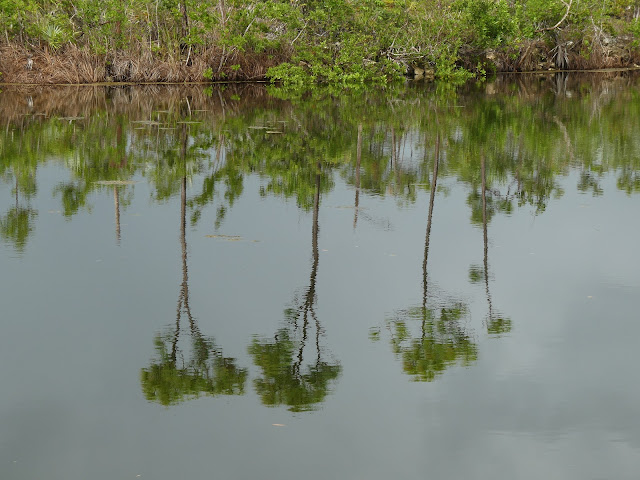 You can and should walk out onto the viewing platform and you may spot a creature basking in the sun in the shallows right underneath the platform itself. It is tempting to get a frisson of fear being so close to an alligator but  it's worth remembering that a recent resident died of starvation after swallowing a plastic toy thrown in the water by an unsupervised child. 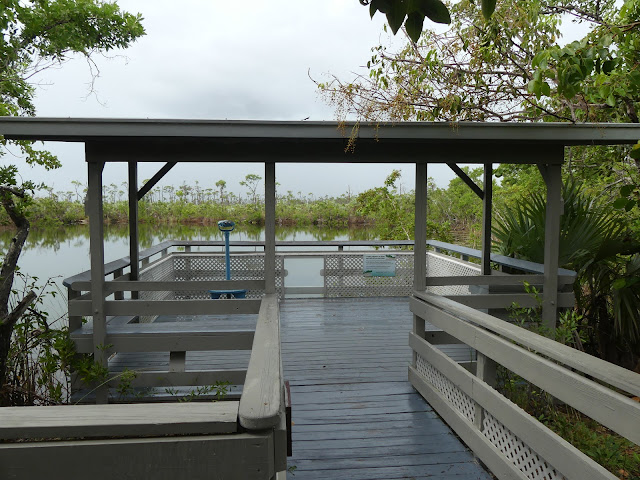 As usual even the most fearsome nature can be overcome by human ingenuity. 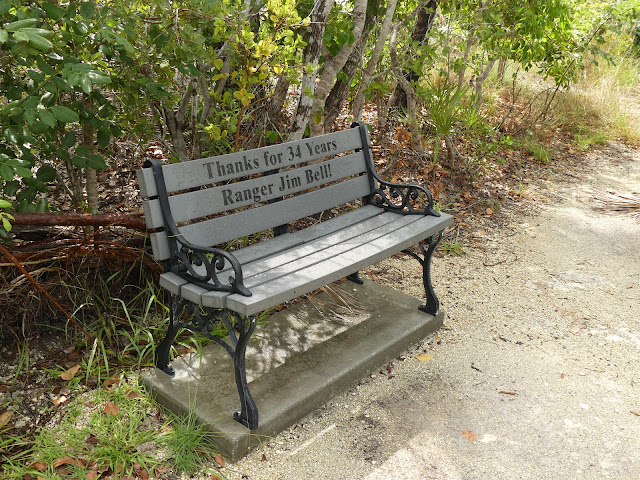 The Keys are small in terms of landmass so as isolated as you may feel in come places on land you are generally never too far from some well trodden path. 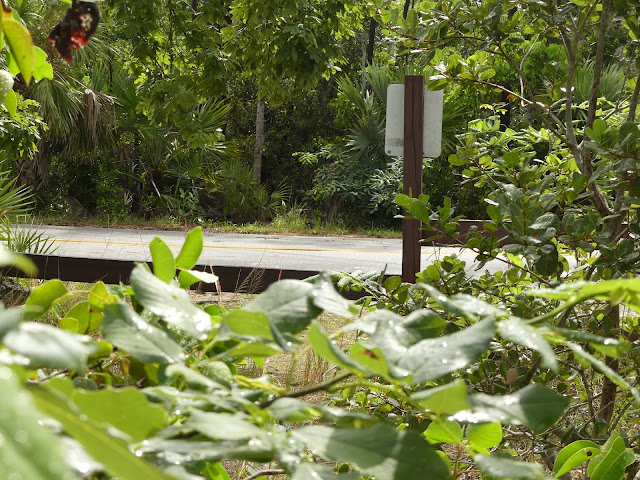 You can walk half way round the hole and right up to the edge but the water itself is a foot or so below the level of the rock. Swimming is not advised. I had my old Labrador Cheyenne fall in once and I wasted no time in getting my arms around her portly self and whisking her out. She didn't seem to notice or care but she was a phlegmatic dog was Cheyenne. 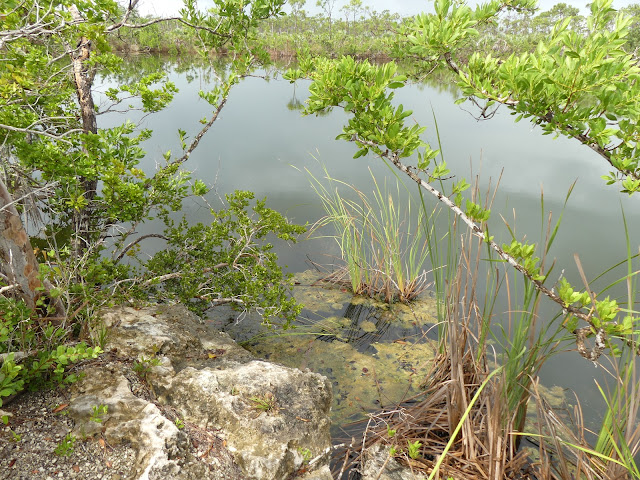 Rusty I trust rather more to take care of himself. I have walked him in wilderness and he is very alert to danger. I have seen him in the Everglades turn round and walk smartly back to the car for no reason I could understand but I never argue with his reactions. I don't doubt he saw an alligator or a boa where I could see nothing. He is a survivor is my little brown bundle of joy. 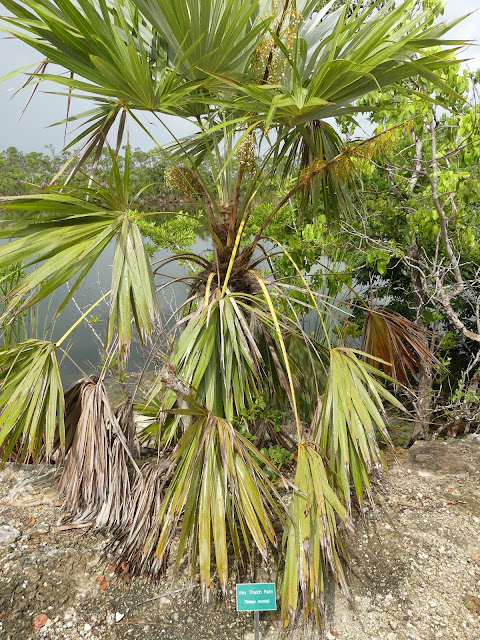 He  stayed close as we wandered around. 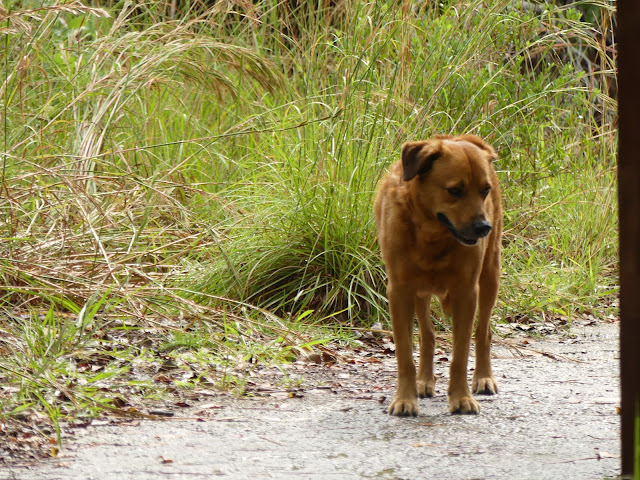 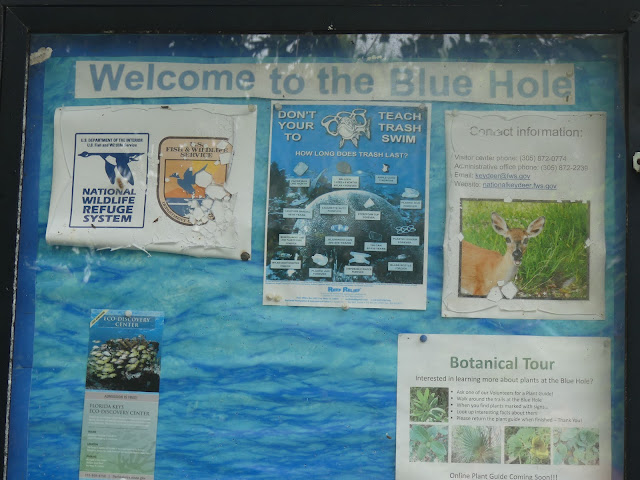 We spent a pleasant half hour taking pictures and taking in the modest views and smelling the interesting scents. 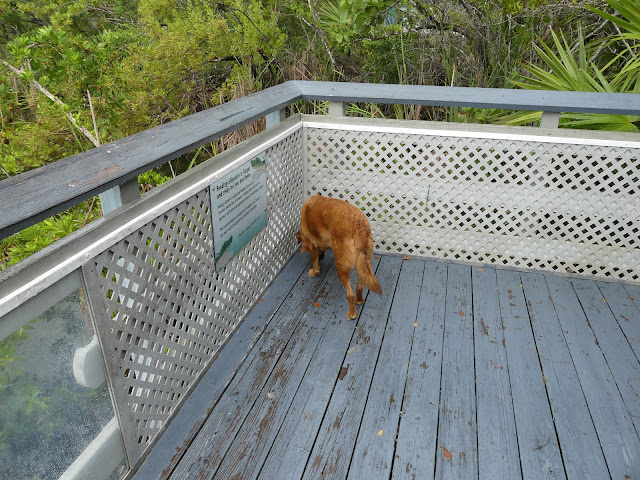 I'm not sure the telescope is much use unless wildlife is present but there it is, a rather nice old timey touch for those that care to spy on nature. 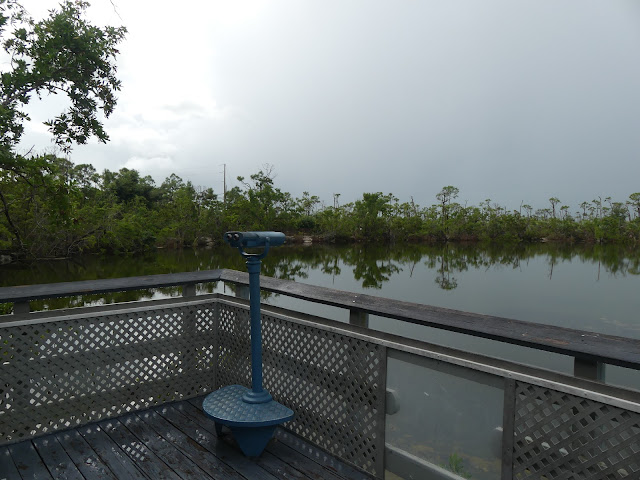 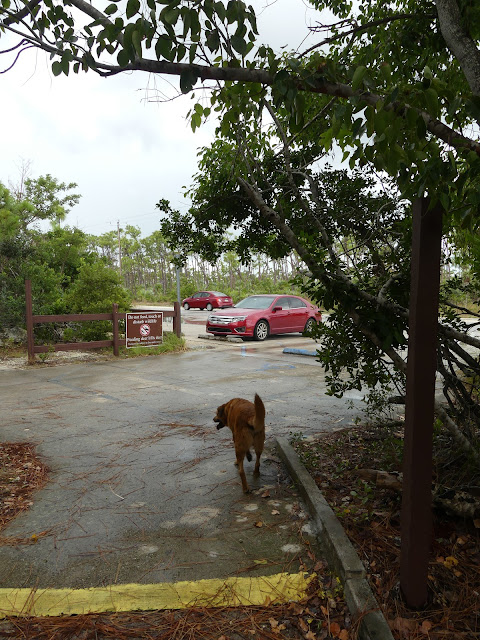