I took Rusty  downtown for a walk and I decided to incorporate the sunset celebration as part of our stroll. The crowds were thinning by the time we got there but there were still several acts swallowing swords and juggling fire. 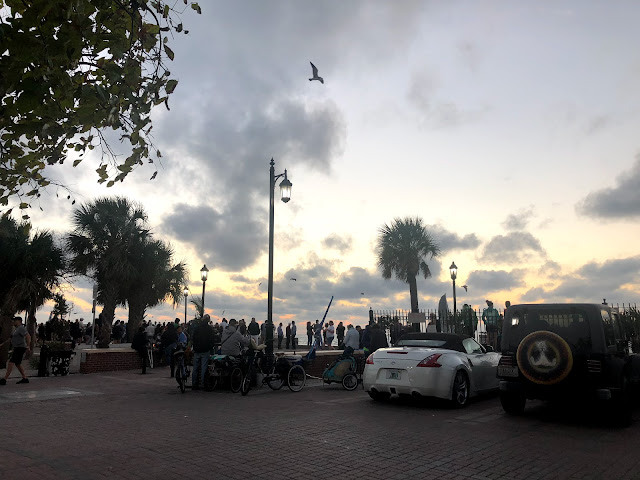 I wanted a knick knack for my wife  and I like the fact that stuff sold here is advertised as being made by real people not imported from those places that specialize in far east mass production. The acts and the vendors are part of a cooperative that pays to rent the square for the evening gathering and supporting them helps that along as well. 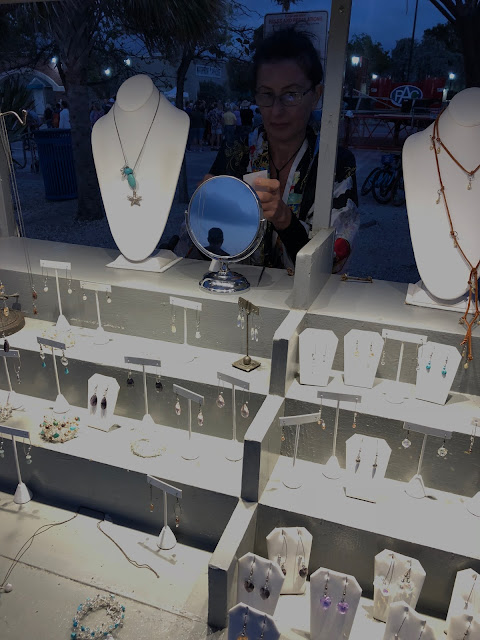 Rusty meanwhile was making friends as only he knows how. 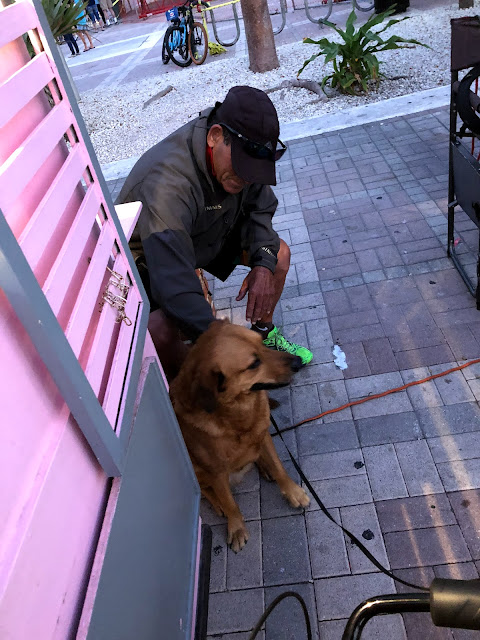 There was some preacher from the Upper Keys explaining the Bible but I didn't overhear any particular revelations I've not heard before. He was very enthusiastic though and he bellowed away  through the cold north breeze. 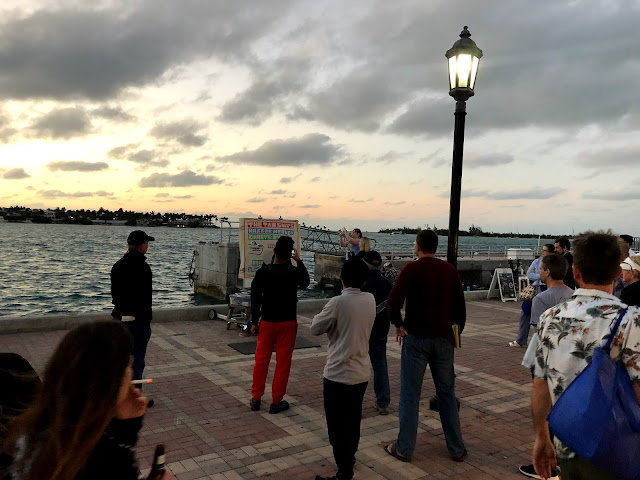 A cruise ship at the middle pier, the one in front of Margaritaville Resort rose up over the proceedings though there were no passengers left at Mallory Square, easily identifiable by their sticky badges issued when they go ashore. A short while later I saw the ship pull away and spin around in the harbor when Rusty and I were walking more peacefully at Truman Waterfront. 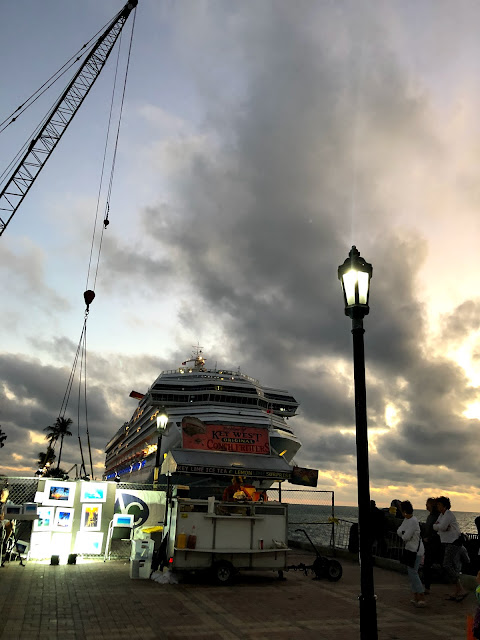 It looked quite lovely actually, a huge wedding cake of lights in the darkness... 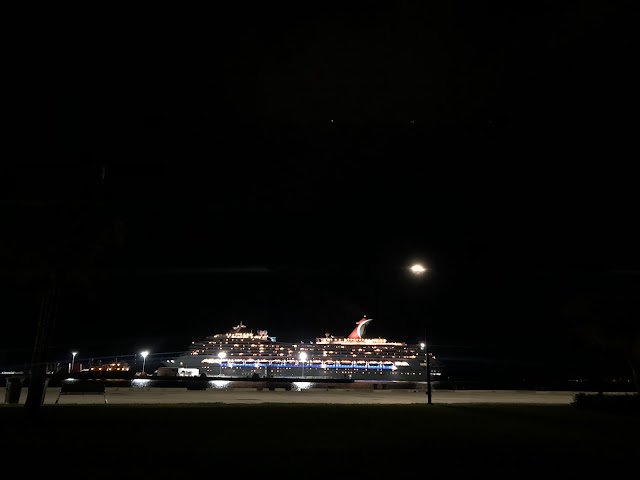 Back at Mallory Square the sunset was proving worthy of it's reputation. This whole bizarre business of toasting the sun's final performance of the day was started by Tennessee Williams as I am sure you are tired of hearing from tourist sources. 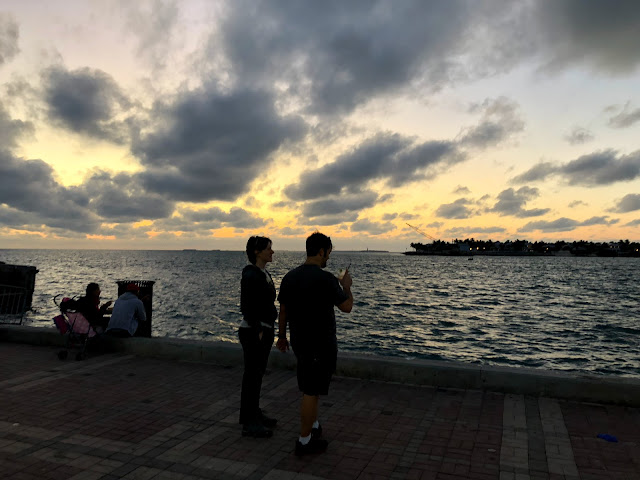 The thing is it has become a commercial enterprise with  vendors and performers paying rent for their spaces and the non profit that rents the square from the city is managed in some manner by a  collection of these people. This formality gives the sunset celebration a certain quality, rare in Key West of reliable longevity. It's been going for years and there are no signs it's going away. As long as there isn't a  cruise ship at the Mallory Square dock blocking the horizon the celebration goes on. And the Mallory Square dock is too small for most modern cruise ships and the sunset limitations make it pretty undesirable as a place to stay over night for the big ships. 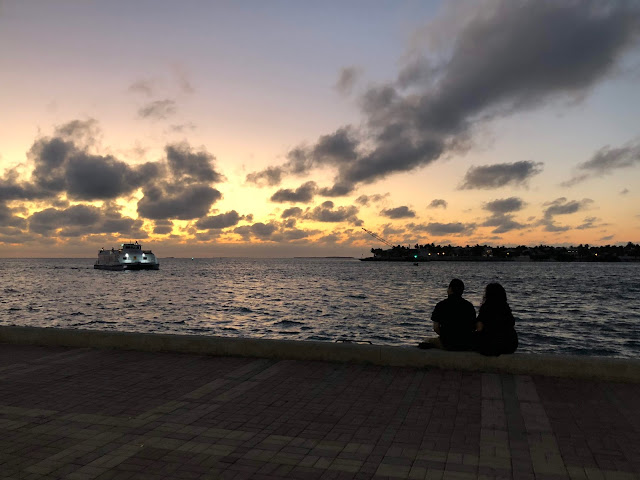 I found I still like this event. I'm going to come back without Rusty but with my wife and a handful of dollar bills to pay tips to performers, take photographs and enjoy the show.You can buy food, jewelry, artwork and have your fortune read. What more could you possibly want at a happy street fair in a town where everything costs money and far too much of it. This is a place to wander, and kick back. 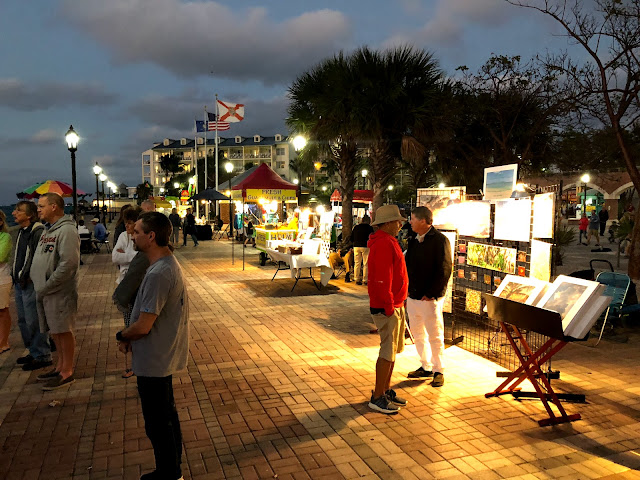 Home many times have you wanted to talk to a psychic under an umbrella on the waterfront in the coolest little beach town you've ever heard of? Don't listen to the tired voices that bitch about the old days and the cookie lady- may her memory never grow less- what you have here may not be 1970  but it is still a little funky and easy going. 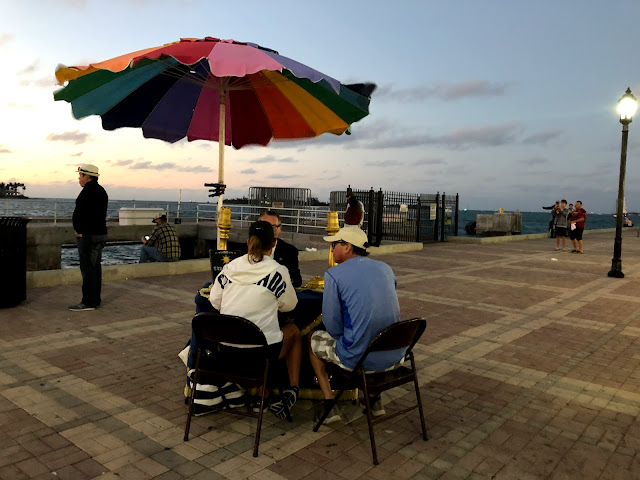 The performers will drag out a two minute act to 15 by virtue of their patter, participation by audience members and the old Key West standby of asking everyone where they are from. I am terrible at audience participation events so I stick to the back and avoid eye contact at all costs. Everyone around  you is having fun so you don't have to be put on the spot if you don't want to be. And these performers make a good living doing these off beat jobs. 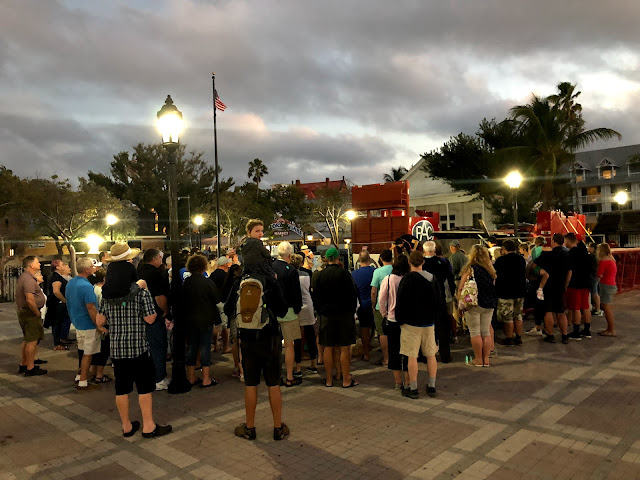 This guy was wailing his saw on our way out of the square. Bob from Knoxville Tennessee had decided to come to Key West for a couple of weeks and try his luck and I felt lucky to have run across him and his musical saw. Musical saws are a big deal, on the level of sub-culture in Santa Cruz where I lived for twenty years and Bob was surprised I even knew what a musical saw was. I hope he comes back next winter. 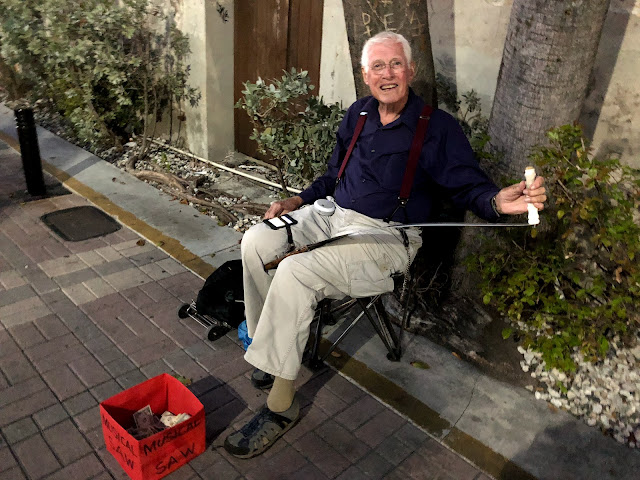 Then some anonymous arse let off a loud thunderclap, a firework or cracker of some sort most likely, and the evening went really bad for Rusty who had been holding his own in the crowds. He looked frantic and started tugging and looking around like he was back in the fields of Homestead being hunted by angry farmers who hated the strays dumped in the Redlands. I grabbed him and failed to reassure him but that's PTSD. We waited till he was ready to move on and then I took him to run for a bit at the waterfront far, as the poet put it, from the madding crowds.   All better. 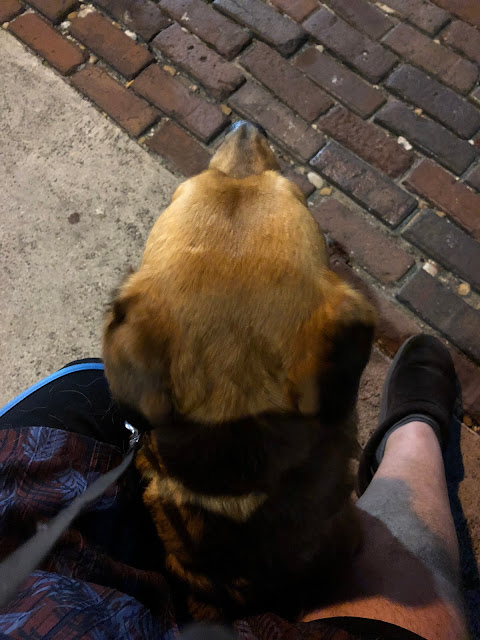