Dinner With Friends, The Internet And Aspergers

I am not a sociable type. To me solitary confinement, with books and movies will be heaven. I have previously mentioned I have autism Key West Diary: My Life With Aspergers Syndrome which makes it very difficult for me to cope with people. Yet from time to time my wife drags me out in public. To be dragged onto Carol's deck of a warm December evening is not a terrible hardship as you can see. 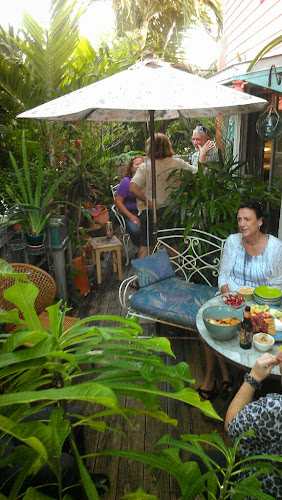 Carol loves plants the way I love solitude and when I made a noise about how much I envied her botanical garden I got put in my lazy ass place. "You have to do the work," Cathy remarked rather acidly. It was probably a comment tossed out without much thought, but like a snail I pulled my antennae in and nursed my Magic Hat while sitting among the fronds and wondering how lucky my dog was to be at home alone. 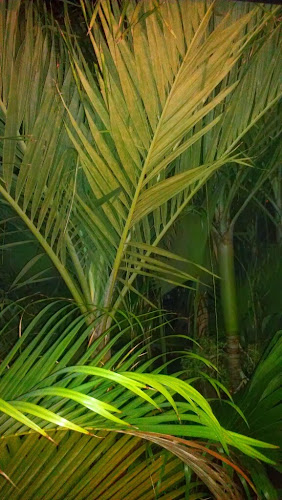 The reason for the gathering was a dude in glasses who showed up in Key West to make Cathy happy. I have to say I admire Terry's fortitude for showing up for the first time ever in a Key West simply because he had fallen in love with his high school friend. After decades apart they reconnected finding themselves both unattached and Cathy's friends decided to put the heat on The Man From Niagara Falls. 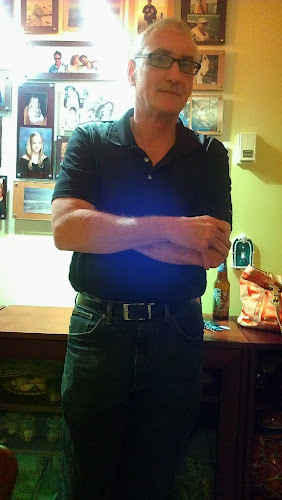 I tried to talk to Terry and imagine my difficulty when it turned out Cathy's boyfriend loves sports. My heart sank, as among my many man deficits is the fundamental shortcoming that sports strike me as God's own waste of time. I cast around trying to see if the aquarium had any escape hatches. My wife smiled at me sweetly indicating thusly that I was here for the duration. Well I said, in my own throwaway line that apparently left a profound mark of gratitude on the Man From Niagara Falls, it's got to be intimidating facing all these strangers. Cathy, in black, and Katherine, with LulaMae, who is as delightful with people as she is vicious with other dogs, hence Cheyenne's banishment at home. 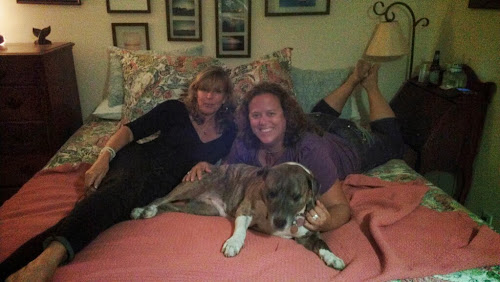 I tried to contribute to the conversation, which mostly talked of people and times past, not inclusive for a pale skinned stranger from Up North as they were introspective memories for long time residents of Key Weird. I tried to add my own reflections on the life of a colleague adapting to her new life in a new town as a way to explain the difficulties of, and time needed for, assimilation. I have been taught a few techniques by well meaning friends and professionals to teach me to cut myself off before I become boring or doctrinaire, a common failing of socially inept smart people with Aspergers, and ended my feeble attempt to assimilate the New Guy. I also tripped up when talk turned to Pittsburgh, Carol's place of origin, which was deemed badly named as it too accurately described it as being a pit, they said. My Aspergers got me again and I blurted its origin as named for the Earl of Chatham, Pitt the Elder, whose son the Younger...as interesting as the youngest British Prime Minister is to me and how he created taxes to fund the Napoleonic Wars might be, I quickly realized the conversational green traffic light had turned to red and I shut up. My over taxed brain was worn out and it was barely dark. 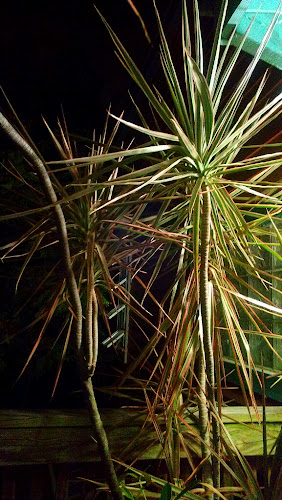 Something happened as we discussed where to go for dinner. I don't recall how it happened but after a stretch of silence as I watched clouds dart overhead and I desperately wanted to try to photograph a palm in night time silhouette, and people were giving very negative reviews of a new southern cuisine restaurant in town I blurted my joy at a recent encounter with a Twinkie. Key West Diary: The World's Most Expensive Twinkie. I went a bit overboard describing my joy at the layers of soft milk chocolate melting in your mouth, followed by the soft sponge and the smooth flavor-free Twinkie cream in the middle. I drooled. "Do you enjoy sex quite that much?" Catherine asked archly, raising her delicate black eyebrow in a mixture of curiosity and amusement.
We went to the Key Plaza Crêperie, a place previously enjoyed by my wife and I and which required no "long drive" all the way across Key West as Carol lives in New Town. 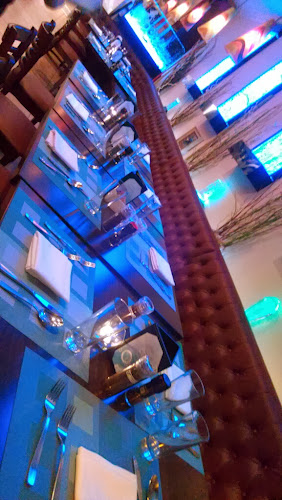 I ordered pappardelle alla carbonara and framed Catherine on the left and Lucy on the right as we waited for more wine and galettes, as they call buckwheat crêpes here. 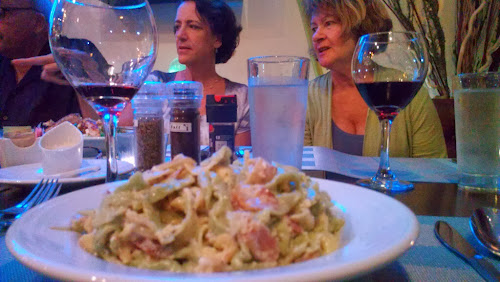 Cathy got the much praised berry salad galette with a carrot flower carved as a garnish. Dinner conversation flowed about us and I drifted off, trying to eat slowly, never easy for me as I tend to focus on one task at a time and demolish each job as quickly and efficiently as I can. Eating is just one more such task, in my autistic world. 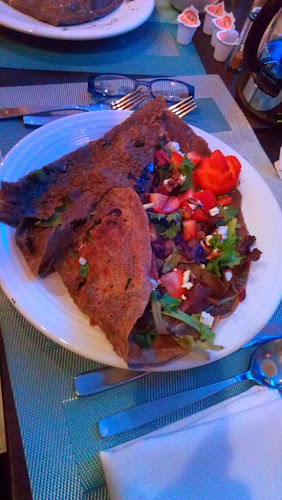 By the time we got to dessert the wine had flowed a bit and the conversation too. Catherine thought my Napoleon cake, a rather more immense brick than I had previously envisioned, merited a photograph. I love flakey pastry and custard, but there was rather more here than I could reasonably manage so, because sharing is caring I am told, I passed chunks around, not before she caught a frame of me cowering behind my immense slab of pudding. 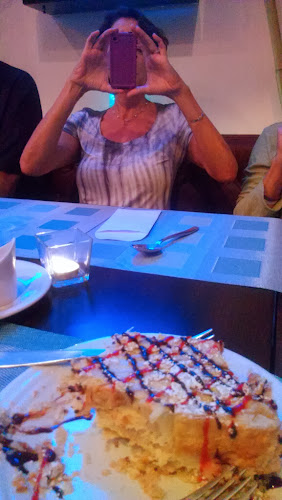 Lucy told us about her own art exhibit at the Salt Gallery at Margaret and Fleming (note to self...) and gave us information about the inflatable art exhibit underway at Truman Waterfront while her husband Jan lost himself in slices of my cake. Jan had caught me earlier getting lost in the bubbles rising through a liquid display on the walls which I had noticed before, Key West Diary: Key Plaza Creperie, but which this time helped me zone out as a reprieve from conversing. I watched the bubbles in fascination as they rose through the pale blue water, swirling and twirling possibly at random in distinct and different streams. It felt very calming to watch them, until Jan busted me! Look away he said, admitting to the same fascination. 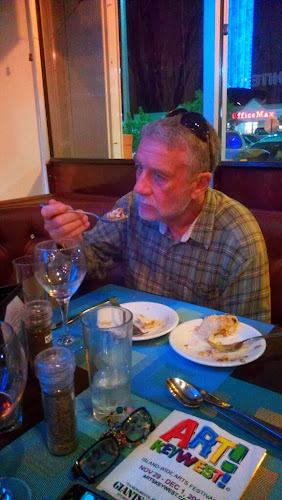 Terry wanted to record his night of adult debauchery, his last before flying home the next day, Cathy but a wisp of scent in his memory cells, so we did the obedient thing and lined up. Let me say here my pictures of people may look a bit skew-whiff, that being so their inappropriate expressions are due solely to my shortcomings as a photographer and are not representative of the mood of the gathering which was quite cheerful. 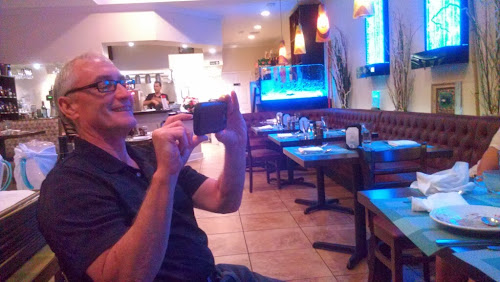 Carol, Cathy Steve (the Internet fact checker) and Catherine, all of whom appear embarrassingly dissipated, but were simply relaxing for a moment between gales of laughter. Catherine was looking at desserts and pondered a coffee selection. Affogata? she queried the table at large...My wife spoke up pointing out I speak Italian. Drowned I said, usually ice cream in coffee. 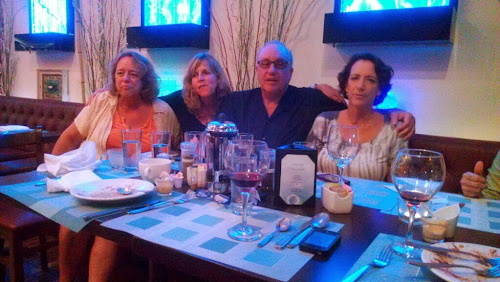 He's right Catherine confirmed, it means drowned, after glancing at Steve's phone. In a certain light on Carol's chiaroscuro flowery deck he looked just like Somerset Maugham, a bit unnerving since the famously crusty British writer of ambiguous sexuality has been dead for quite a while. But he did confirm my abstruse knowledge of obscure place names and bizarre foreign drinks. I wished I felt like Chris the waiter who knew exactly what to do when asked for a photo pose. No inhibitions that young man. He represented Key West nicely to The Man From Niagara Falls whose idea of life on the edge of reality was getting a work out. 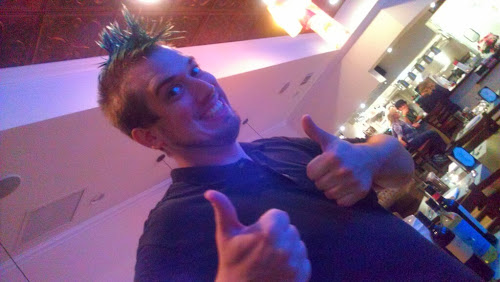 Lucy and Jan, full of my Napoleon, relaxed on their own end of the table while the accountants in the party tried to figure out the bill. I think it was around $260 for nine people and my hasty suggestion we divide it by ten and double the result for couples was met with howls of indignation as being simplistic - the teetotalers insisted on that point to we the wine drinkers. But there are only nine of us! That was the joke I replied and the arithmetically impaired calmed down. Chris' joke that he wanted to get home before midnight started to look like a distinct possibility as the complexity of bill sharing defeated the sharpest minds at the table. 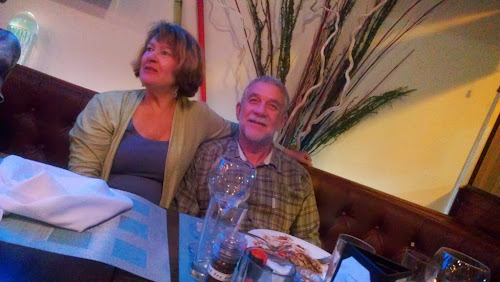 Steve and Catherine keeping an eye on Google information as they waited for the bill to get sorted. Not being from a large family a bill that size in and of itself was quite a shock to someone like me but I did the usual and left it to my capable wife to sort out the dollar signs. While I was sitting there dreaming of my bed I was tapped on my shoulder and introduced to Massimo, the chef-owner brought to my side by my wife who knows how much I love speaking Italian on demand with strangers in front of an audience. He is from Palermo and is glad to be out of Sicily where the economy is on its knees. "So what did you talk about?" Cathy wanted to know. This and that. As one does, among immigrants from il bel paese. 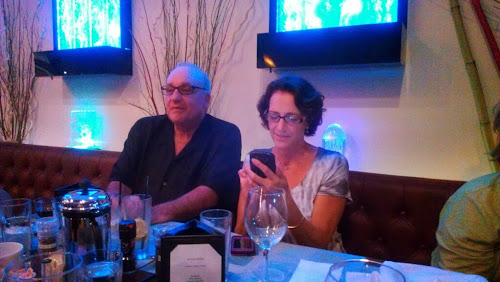 My lunch break Monday was a Badboy burrito on my favorite bench at the sports field at the end of Petronia Street. Me, alone with my Kindle and a deep blue sky overhead through the branches of a shady gumbo limbo. 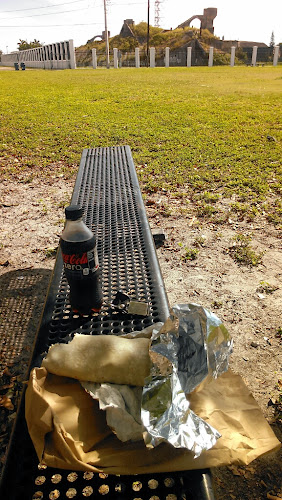 No need after that to worry about what I said to whom and who I may have offended in a social setting. Aspergers is exhausting, in English and Italian.