Key West has a habit if taking care of it's own, alive or dead. In life the wretched and poor and mentally ill get food and shelter (if they want it) and in death the Reverend Steve Braddock holds a funeral service for the forgotten dead in a corner of the cemetery reserved for the impoverished. He did it  51  times in 2012 according to the Key West  Citizen. It is a left over from pre-industrial society when villagers treated the dead with respect in a world seen as God's creation. A world where dogs have no souls and no place in spaces reserved for those religious events of births, marriages and deaths. 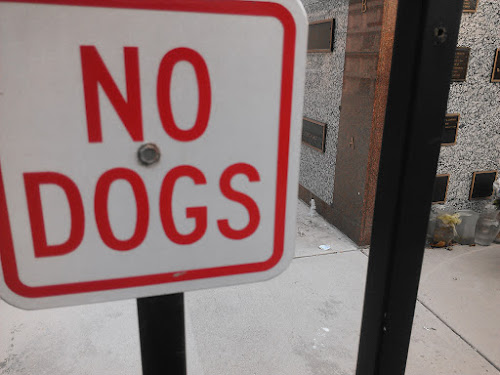 Cheyenne and I were fine on Olivia Street outside the fence, looking in and wondering about those small rectangles of memory. It said "look it up" so I did, thanking the 21st century for Google! 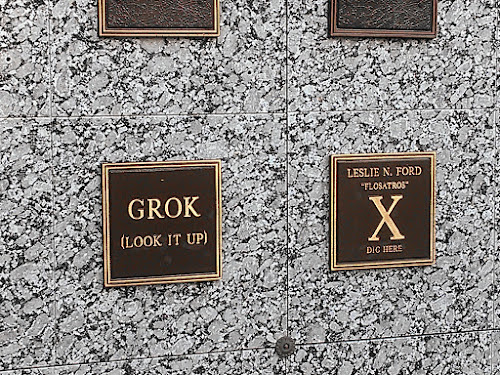 From Robert Heinlein's novel Stranger In A Strange Land:

Grok means to understand so thoroughly that the observer becomes a part of the observed—to merge, blend, intermarry, lose identity in group experience. It means almost everything that we mean by religion, philosophy, and science—and it means as little to us (because of our Earthling assumptions) as color means to a blind man.

Surely this is another of those "only in Key West" spaces, a place where the homeless get to write their own epitaphs and whose epitaphs are cleverer and more literate and more thought provoking than those of the middle class dead celebrated widely in the tedious "guide" books.

The Ministry Of Gray Walks

I was in Key West early in the day and not finding what I was looking for, which was bright sunshine and white clouds. The skies above were overcast and varying shades of gray, giving Poorhouse Lane a dark and slightly ominous air. 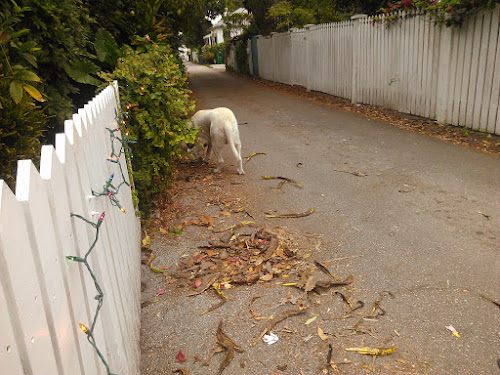 Cheyenne was finding something in the bushes as usual, unperturbed by the momentary absence of summer. The sky and the light put me in mind of California's eternal marine inversion layer over the coast all summer long, gray and oppressive and holding a promise, never fulfilled, of rain. 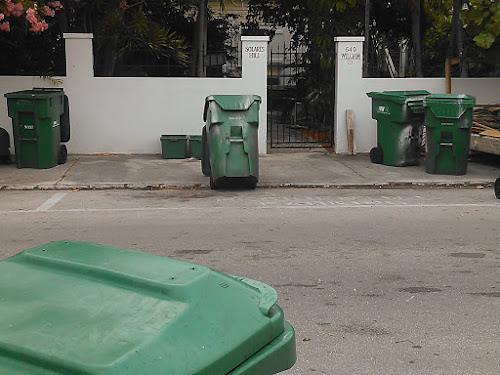 it seemed to have been trash day, a suspicion forced upon by me the presence of the cans abandoned in the street like broken Dahleks. This cat was sleeping until a fat yellow Labrador strutted by, ignoring her completely. 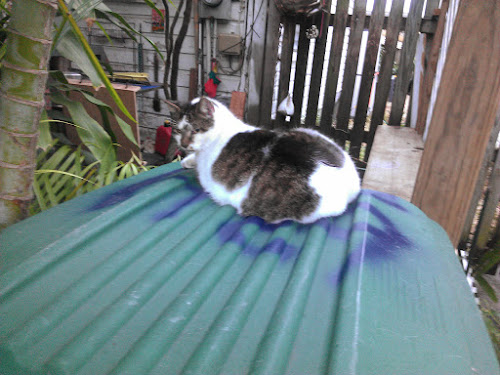 You know how I point out that rents are high in Old Town, especially considering there's so much poor housing stock. Like what sort of housing stock you ask? Like this I say...talk about a jagged roofline... 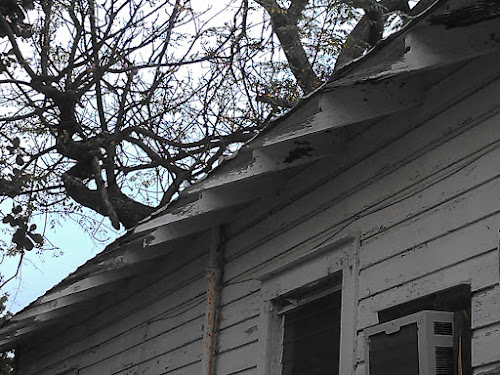 It was early in the day and this guy stepped out past me on William Street as Cheyenne and I ambled back and forth sniffing as we went. We reached the corner of Windsor Lane and he suddenly stepped out in front of me, again! This time from Charlie's Grocery with a coffee in his hand. He appeared to be off to work, on foot. Speculating wildly I suspect every spare penny goes home to Chiapas or Guatemala or some other holdout where small wiry Indios pack their bags and head north to earn a sort of living wage with back breaking labor. The cost of the car he was walking past would set his family up in self sustaining comfort if that were his story. Funny old world isn't it? 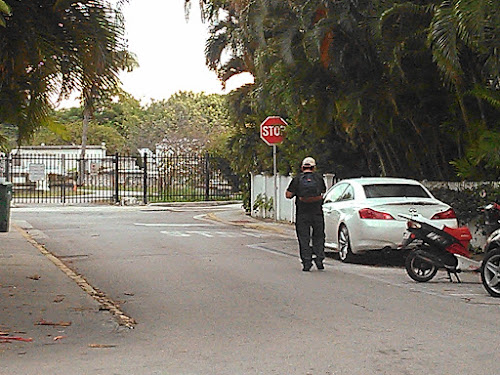 I have developed a Floridian's dread of parking my car in the sunshine but I have also developed a healthy respect for all that falls out of trees around here. Birds in the Keys seem to enjoy eating glue, at least those that choose to roost in trees. So I try not to park directly beneath said trees, though this primered classic car got a different kind covering from this particular tree. 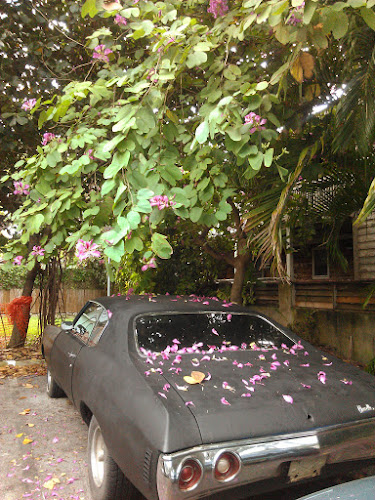 Remembering that I fail as a botanist I cannot say what it is, nor do I care too much to name it in any case, but that it, whatever it is, is blooming in December is the point I suppose. 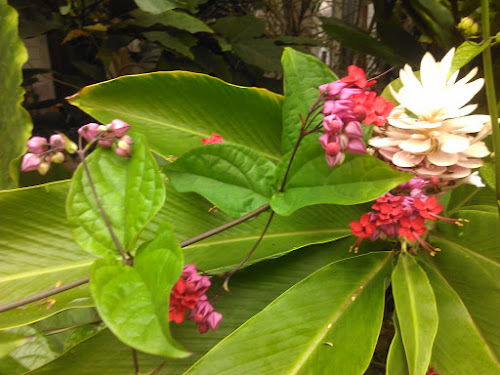 And if there were any doubt that it is in fact the Roman Tenth month look around. I try not to be startled when I see the Holy Family depicted like some grotesque 20th century Disney cartoon, middle class white people in bath robes pretending to be a middle eastern carpenter's family from the Year Zero, or thereabouts. Nevertheless it gives me pause because I cannot reconcile such cluelessness with the modern Information Age. The more knowledge we have at our fingertips the more deliberately obtuse we seem to have to be to get through the day. I live in the hope that the God in whose image we are reputedly made, has a robust sense of humor. 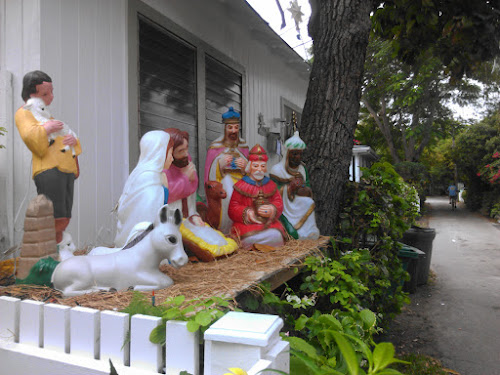 This celebration of the Holiday Season seems more in keeping with Key West's public image. When I write that living in Old Town can be a trial this bottle decoration may go some way to explaining what I mean. I am not teetotal, far from it, but I can hardly imagine the constancy and determination to tipple that leads to amassing such a collection. Surely so much vodka was not sunk without the accompaniment of friends and loud merriment, night after night. I hope the neighbors enjoyed it. 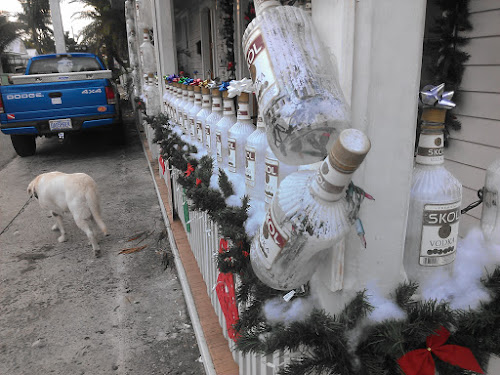 I admit I no longer make much use of pay phones though when I see them wrecked and unuseable I feel their absence as a lack of ack up in my life. What if my smart telephone, source of these pictures, were to fail me? I have lots of memories of making my living by pay phone. When I was a radio reporter in California I was always to be seen juggling my notebook, my tape recorder and my audio adapter hooked over the mouthpiece sending the spoken word far and wide. I even learned how to unscrew the mouthpiece of a home phone and wire my tape recorder to the innards to send audio tape across the country. Oh happy days! Not really but we did the best we could with the technology we had, magnetic tape and telephone wires. I remember pay phones very well, I lived and worked by their utility. 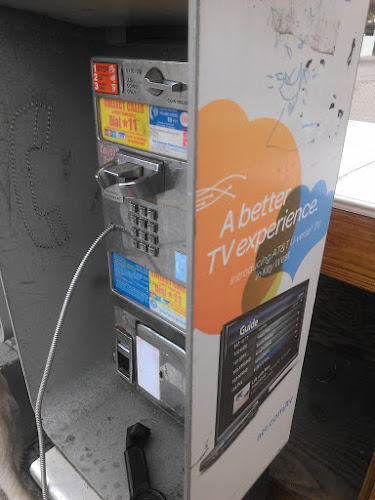 Above I see an advertisement for a "better TV experience" by which they mean sports and news on TV to keep the laboring masses opiated, and below we are warned that children may be in the street unsupervised and playing. That does happen in Key West. Children do play in the streets and ride their bicycles around town in perfect safety. It seems an unlikely idyll doesn't it? The newspaper reported this week that the Sheriff's Department has been training and has plans for any possibility of a school shooting in these pacific islands. 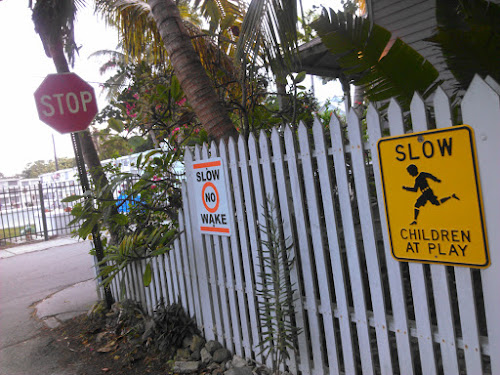 There are children of all ages in Key West, including annoying rainbow children making nuisances of themselves, living off the grid by begging from people on the grid, people we used to describe as "square," people we have become... There was something peculiarly inappropriate about seeing the flower child hobbling along with an old Man's walking stick. I hope his Dad has a good health insurance policy for him, else we will be the ones paying for his treatment until the Affordable Health Care Act kicks in. 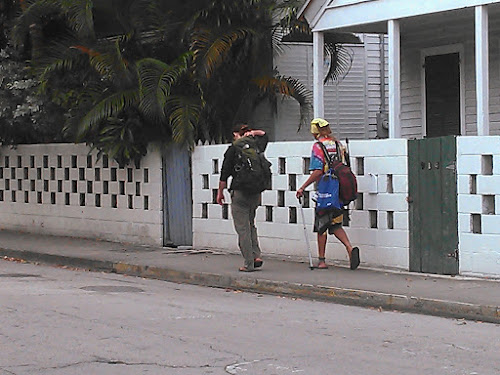 By the time we got round to Johnson Lane by a circuitous route preferred by my wandering dog it was still gray and overcast and I lost hope we would see sunshine. Cheyenne still didn't care, she was busy following trails known only to her nose. 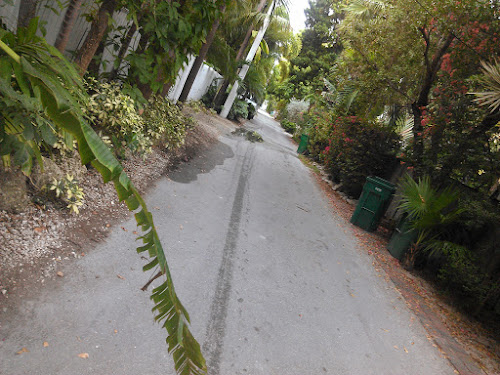 As we came out on Truman I decided it was time to give up on summer for the morning and it was therefore time to play with my phone camera. 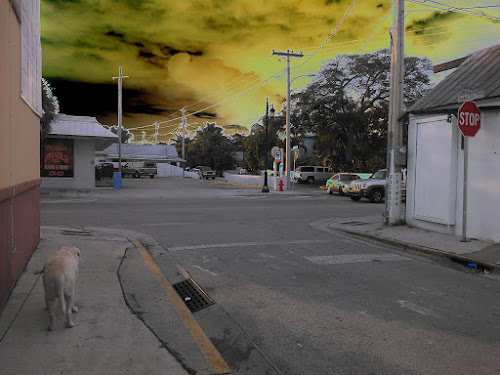 I was left trying to decide if this was a prelude to nuclear holocaust or the zombie apocalypse. Modern intelligent telephones are amazing machines. skies may still have been deeply gray and about drop a few tears of rain on our heads, but from the picture you wouldn't know it. It's a sad day when one can't believe the evidence of one's eyes. Perhaps Jesus really wasn't a Palestinian, perhaps the images are right.