Phillip and Van lived in Key West for a while in a cottage in Old Town but it didn't take. Phillip worked in the schools and Van is a retired archivist and they missed their friends and their culture and their seasons Up North. They've been together 38 years moving around, buying and selling homes, not flipping but enjoying the challenge of making a space a home, getting bored and moving on. Van (L) is a native of Maine while Phillip (in the Provincetown t shirt) is from the Mid West, and they've been in Boston two years, which means its time to move on and they are eyeing a shift to Portland, Maine for a more laid back lifestyle. That would be move 28 which blows my mind, as I have just moved for the first time in a decade... 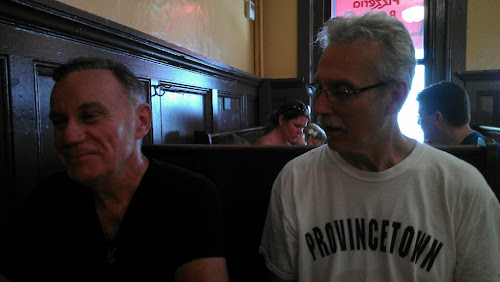 Cheyenne likes their decorating style and promptly made herself at home. 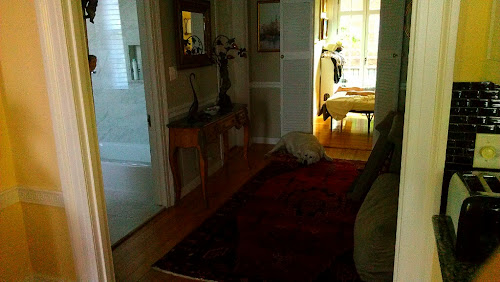 Their space is small but it's in the Beacon Hill neighborhood which is where the money lives. And they have a birds eye view of the riverside park where the Boston Pops were going to celebrate the Fourth in an open air concert. Hurricane Arthur made other plans and the last we heard the concert was supposed to take place last night to avoid the storm. We got out early as traffic was supposed to be a mess as preparations ramped up. Fourth of July is one of my favorite holidays but spending it on the road is a bit of a drag. I had hoped we might get to Canada and pretend nothing was happening, but New Brunswick is just too far away. 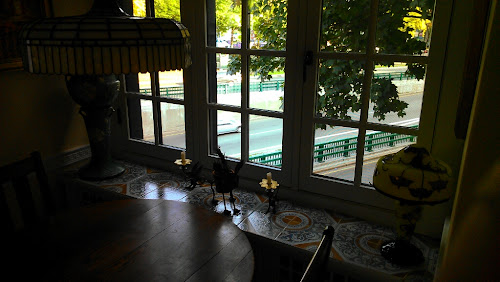 The boys love to walk and we took a couple of urban hikes enjoying the "Emerald Necklace" string of parks created by Frederick Law Olmsted and much revered by Van and Phillip. You can walk almost the entire way across the city in shady strip of manicured woodland. It's quite lovely. 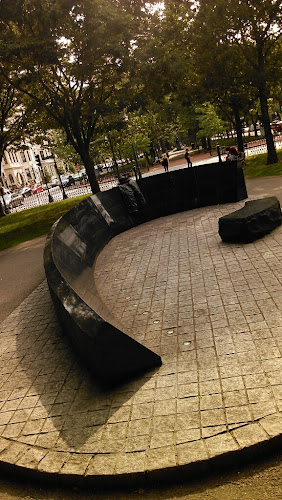 Our destination was the Prudential building with an oddly named restaurant, the Top of the Hub, on the 52nd floor, far above the shopping mall below. 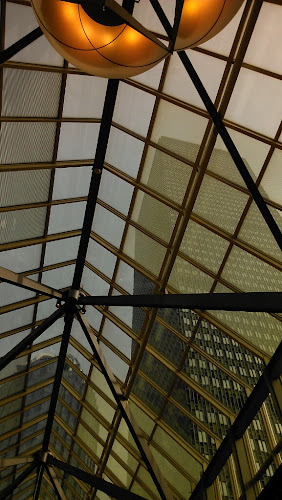 I never feel quite comfortable in these places especially when they are well attended like this one. 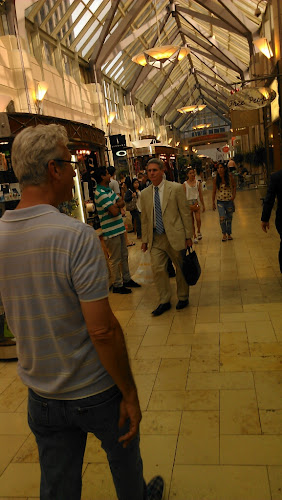 We ate absurdly well, a series of tapas style plates, calamari, mussels, risotto balls and hot dog sliders(!) washed down with cocktails. It was very decadent. 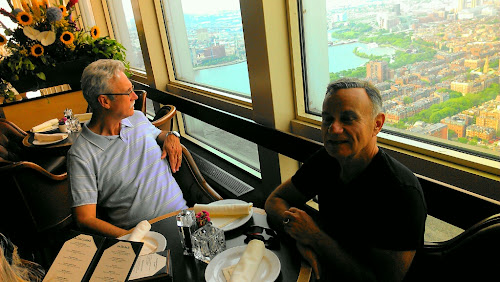 Then we strolled the top floor and checked the sights, the Emerald Necklace winding its way across the city, Fenway Park baseball field illuminated for the game being shown on the TV bar across the room, the offshore islands dotted by white sailboats in the sunset. 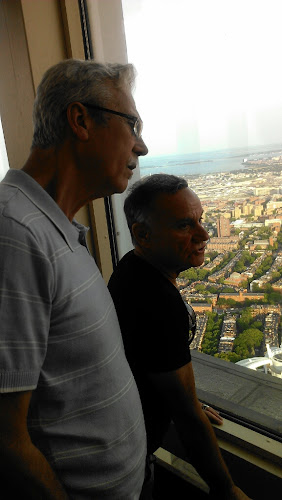 The next day our walk wound across the entire city, through the ancient streets on the hill, past John Kerry's home, which Van pointed out with glee, but it looked like a regular town home to me. We should all marry inherited wealth as he did. I checked out this cobblestone alley but nixed it - hard to get a scooter down that! 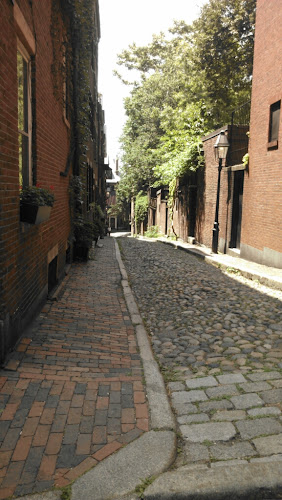 Another landmark where Steve McQueen shot the Thomas Crowne Affair...I am not much for movie locations, I feel they spoil the mystery, but Hollywood's choices validate places for lots of people. 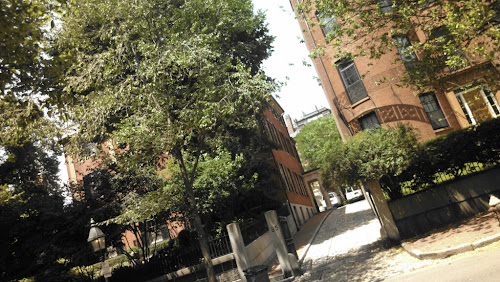 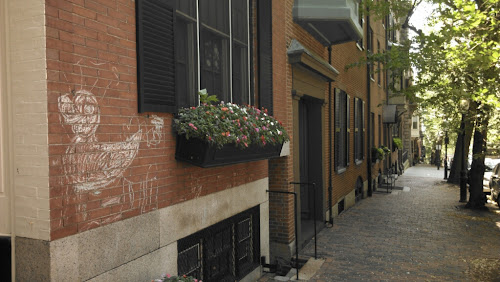 Coming down the hill we passed the statehouse. Massachusetts is unusual in that it's largest and most prominent city is also the state capital. However this is all we saw as they had a fence up all the way round to keep our democracy safe. I miss the good old days of brash self confidence instead of the modern cowering before threats by terrorists and nutters. 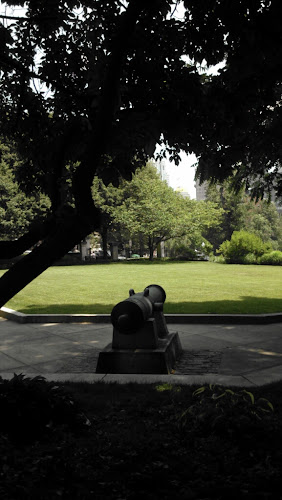 Boston is all bricks, steep hills and history. Somewhere past the financial district we barely noticed the place where Benjamin Franklin was baptized. I was drowning in stuff to see everywhere. 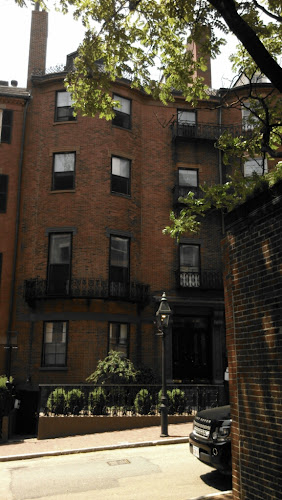 Public notices are quite polite especially considering this is a town where eye contact and public manners are unknown. 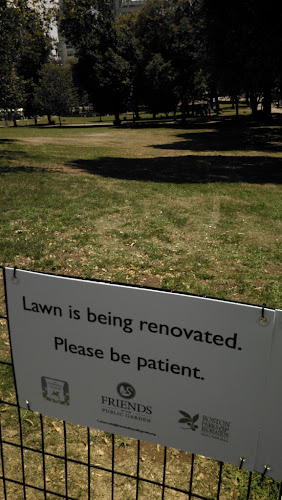 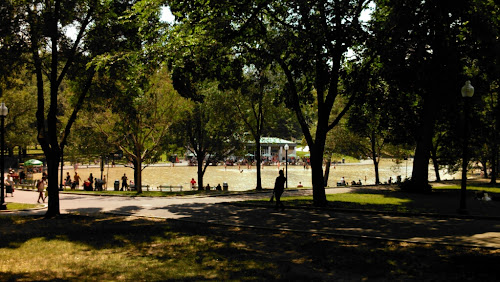 Above we see a vast shallow paddling pool and below adults sitting out on park benches, a popular passive pastime in this city that lives through brutal winters. 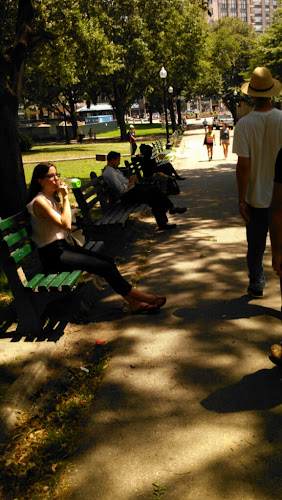 Costume people shake up the street scenes. Revolutionary Boston is a big deal in tourist areas. My favorite reality check, A Few Bloody Noses: The Realities and Mythologies of the American Revolution is probably a safer bet than the propagation of the palatable alternative reality put about for casual tourists. 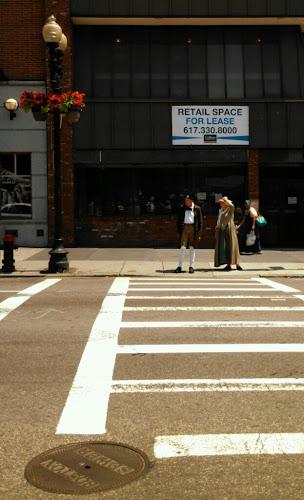 Elizabeth Peabody had her business here and they still sell books in this place. 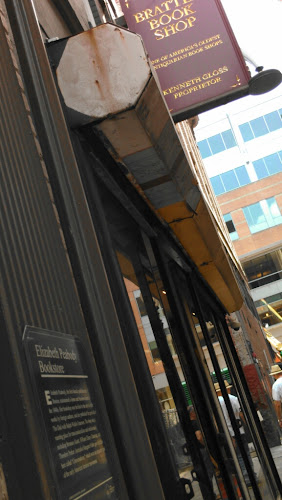 Unlike so many American cities Boston lives it's history, not with fanfare like New Orleans or reserve like Charleston, but simply as a daily fact of life. I like this attitude very much. Key West harps on the connection to Ernest Hemingway ad nauseam but Boston has an equivalent figure on each street corner it seems like. Too many to flaunt all of them all the time. 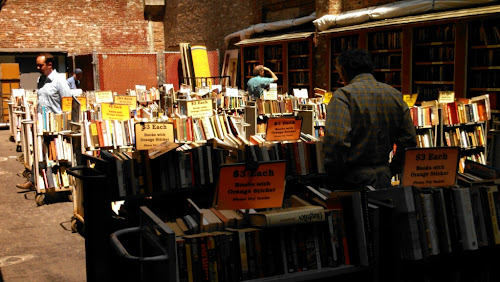 The financial district could be anywhere... 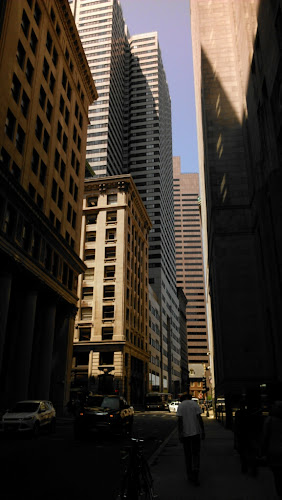 ...but in the middle we find this modest, perfectly proportioned building, unprotected against terrorist attack. This is the Commonwealth's original state house. Built at a time when democracy in America meant free access to lawmakers. Happy day. 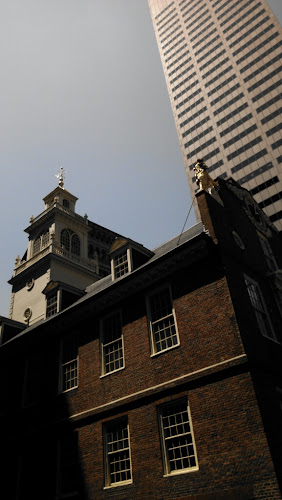 This ancient street we rushed down barely giving me time to snap a picture, never mind revel in, houses the oldest tavern in the US, still operating, and the pub where Revolutionary conspirators met. I wanted to pause and enjoy this smattering of the past still extant, able to recreate the sense of the time with a little imagination. 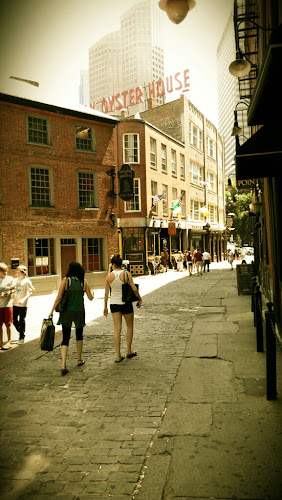 Our destination was more important than all that history crap: Regina's Pizzeria. 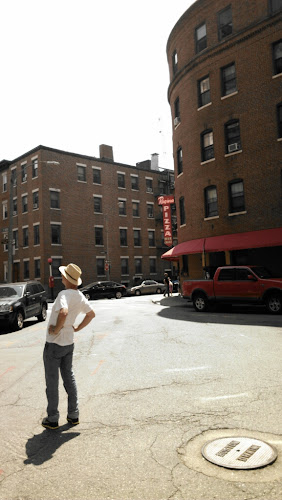