At last things are changing between the US and Cuba. The death grip of the Miami Cubans on the ridiculously outdated embargo seems, after 55 long pointless years, to be superseded by a new outlook from the younger generation. The announcement today that the two countries will be exchanging Ambassadors looks as though it may well lead to an end to all the restrictions which never did overthrow the Cuban government and brought hardship to many, all to pacify the egos of Cubans in Miami unable to bring themselves to get up and go fight for their country from the comfort of the good lives they made in this great nation. Give Fidel Castro credit: he did just that. 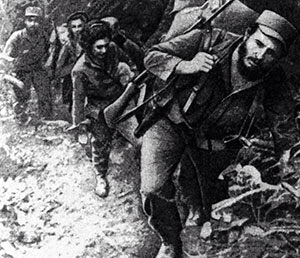 My interest in ending the embargo is purely selfish: I think life in the Keys would be enhanced by a high speed ferry service as proposed between Stock Island and Mariel. A few years ago I crossed the Adriatic Sea from Italy to Croatia with a rental car on a ferry with room for 800 people and two hundred vehicles at a speed of 35 miles an hour. 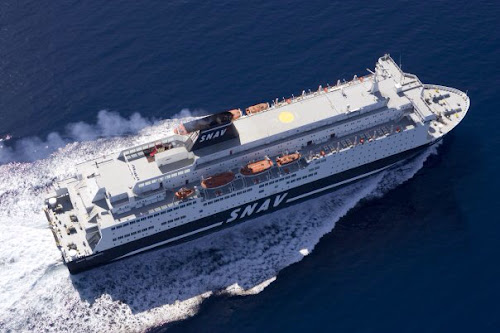 Imagine the trade that will pick up between the US and Cuba for those interested in such things. I see room for powered two wheelers here among the trucks. My interest is in motorcycle tourism close to home. This would put Cuba closer than Daytona Beach: 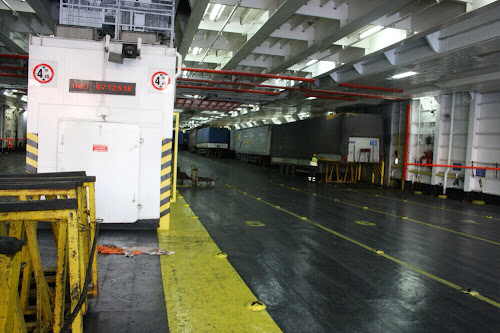 Tell me this isn't enticing especially if one could take an 8 o'clock ferry and be in Havana for lunch improving the lives of working Cubans by spreading around US dollars and the message of freedom. And after years of having flat straight roads nearby the twisties would be welcome. 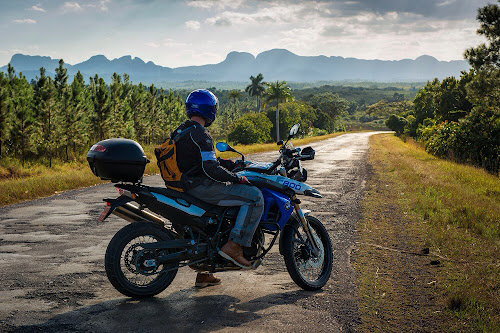 But before my riding fantasies can come true there's tons of propaganda everywhere to get past, on both sides of the Straits of Florida. Americans can go to Cuba even now and charter flights leave daily from Miami. Quite aside from the dubious legal grounds of these over priced monopoly flights, restricted to benefit the operators ( émigrés of course), I have no desire to visit a country that is repressed and impoverished by politics. I traveled the Soviet Union and that was enough repression for me to see up close. Oppression is everywhere but in Cuba the US role in abetting it, perhaps unwittingly if I'm to be generous, makes me queasy. I'll wait till travel is legal and open and mainstream even if that means I'll see McDonalds outside the US Navy Base. 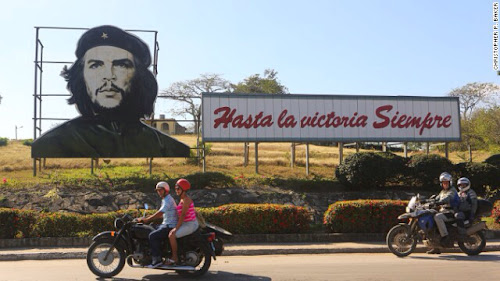 One day I keep hoping, lunch in Havana. It doesn't seem like a lot to ask.

Posted with Blogsy
Posted by Conchscooter at 3:51 PM 8 comments:

Sometimes Key West surprises me and I saw these nicely painted trash cans and I thought nicely done! 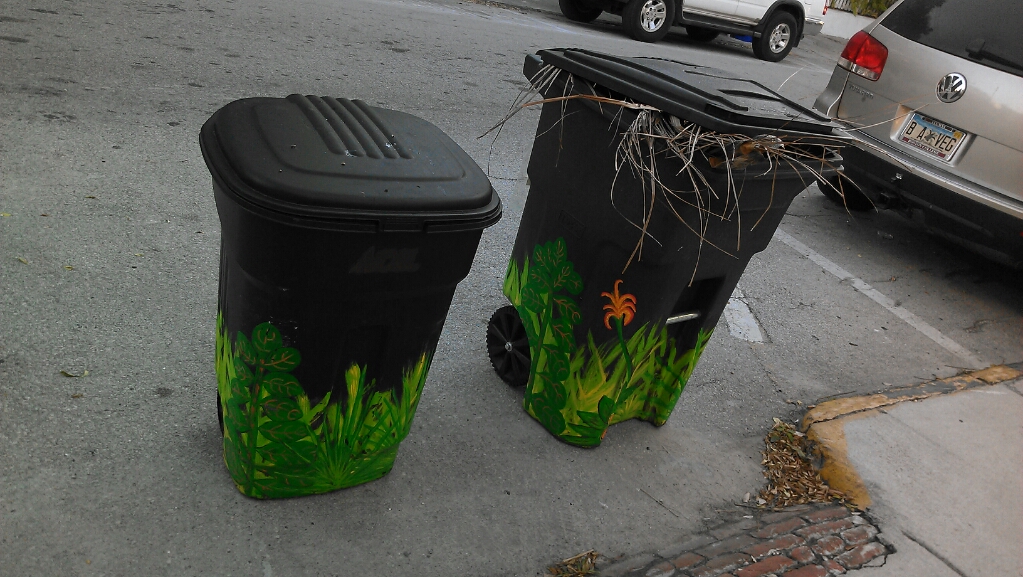 I  was struck by the reflection of the William Street church as Cheyenne dragged me up the past. 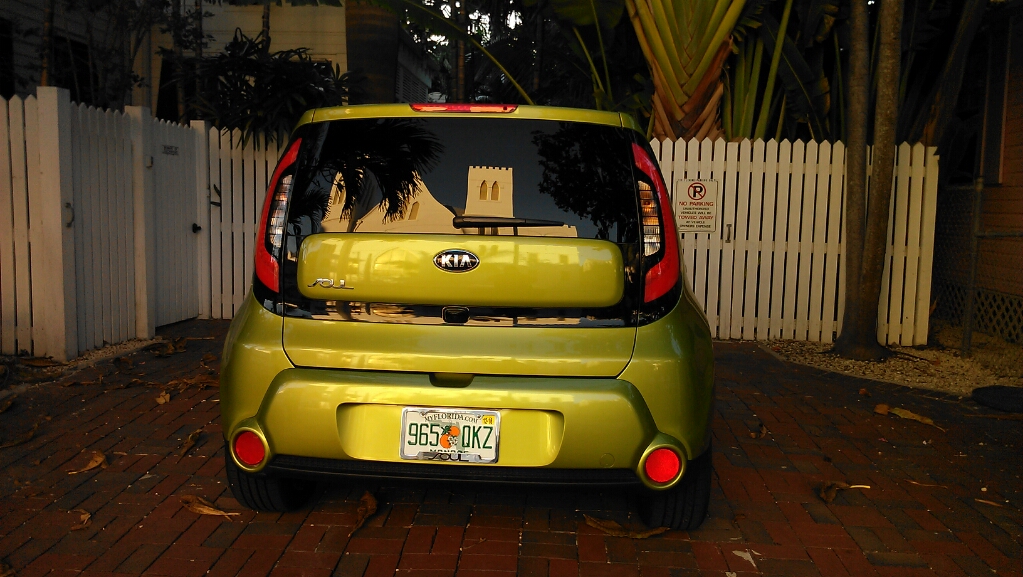 And again a but further up: 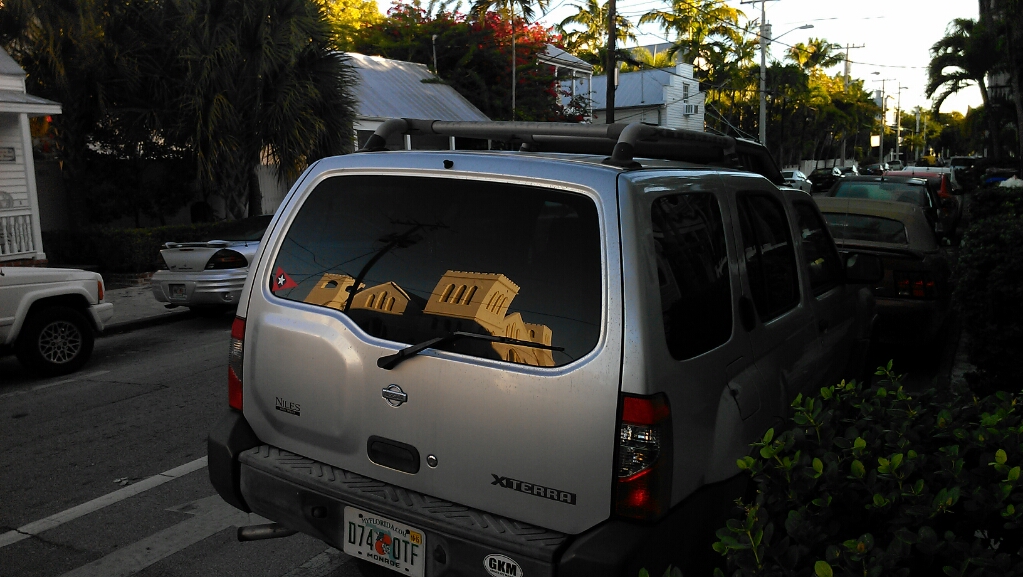 Cheyenne was a determined walker, the air was cool, about  65  degrees and that seemed to enliven her. 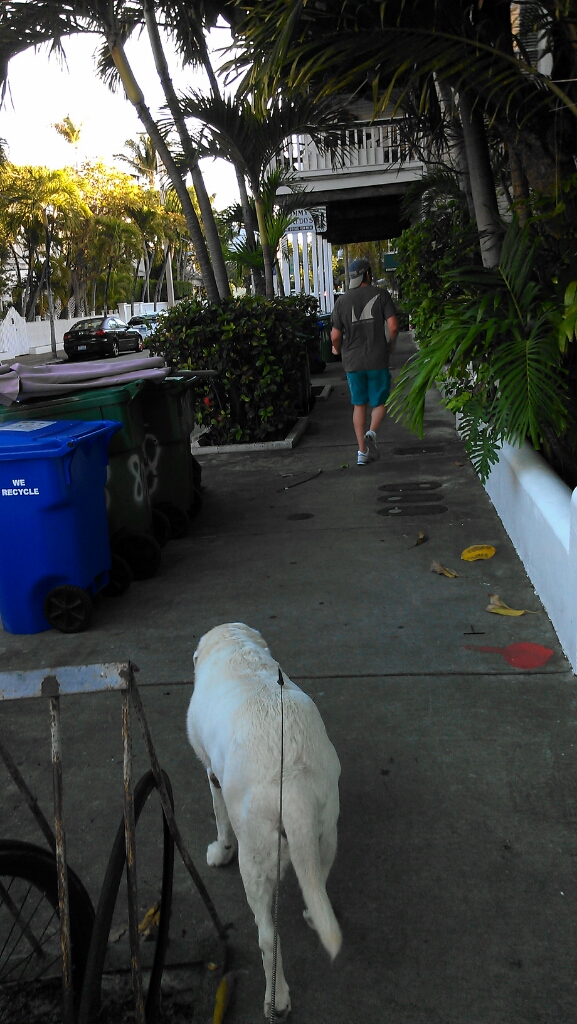 These days I look at Residential Parking spots, the forbidden land to a county resident like me. My licence plate labeled "Monroe" marked me as a county resident in the good old days but that is no longer enough. The new permit system requires actual city residence (or a motorcycle) for easier parking. Cheyenne might have to learn to ride pillion. 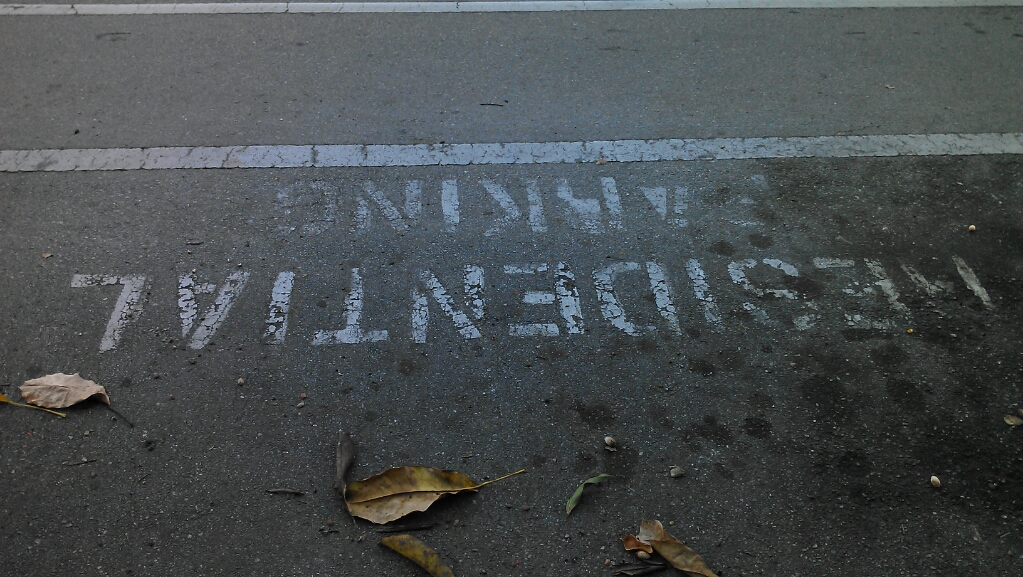 Christmas is almost nigh and the absurd reminders of snow and Teutonic Yule start popping up all over town. Why would anyone  want to be reminded of snow flakes? 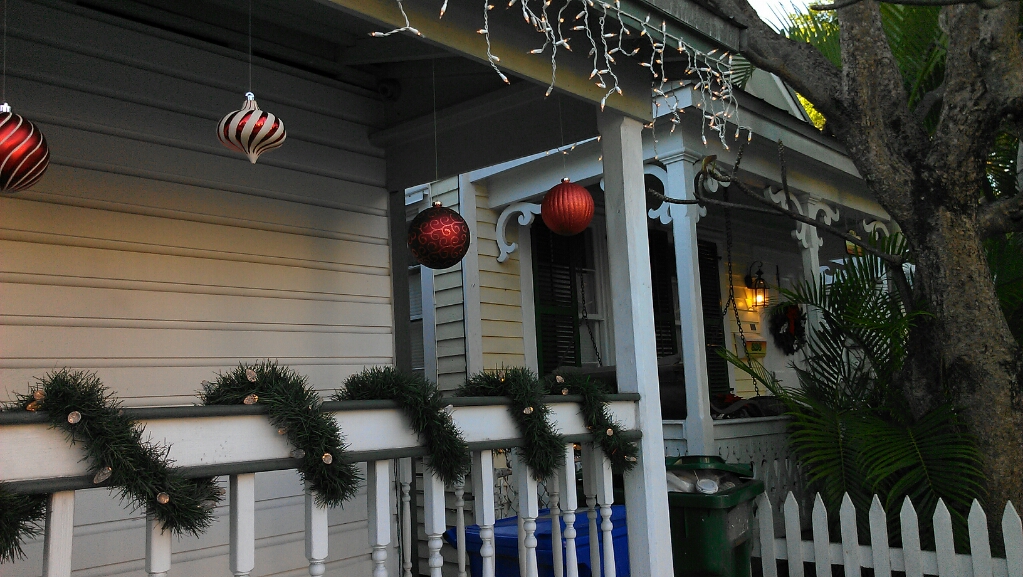 The sidewalk obstacle course on Eaton Street got my attention away from Christmas decorations. It was  a slalom. 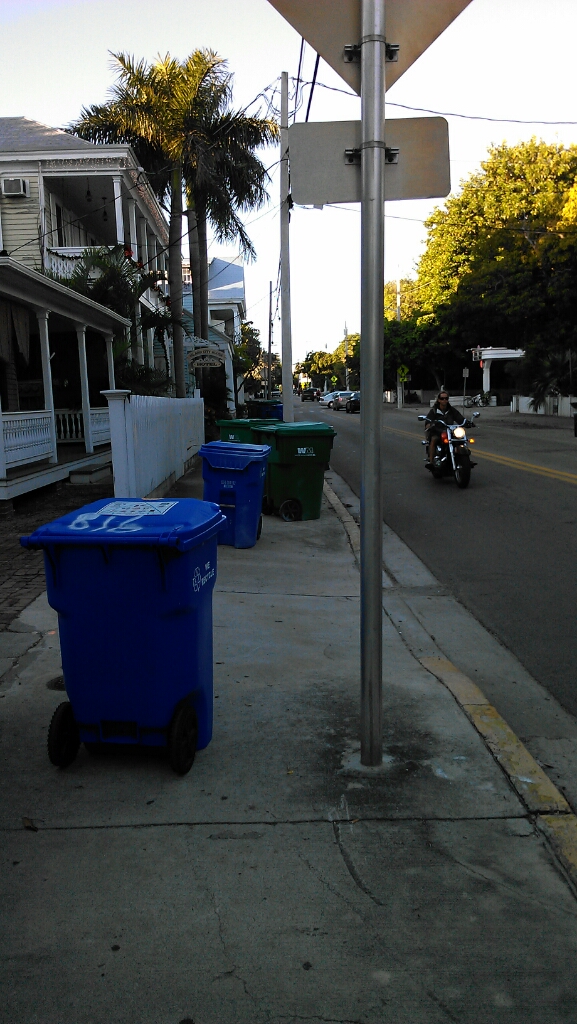 Oops! No!  There they are again, palm fronds, Christmas tree, wreath and spinning fans. All in one. 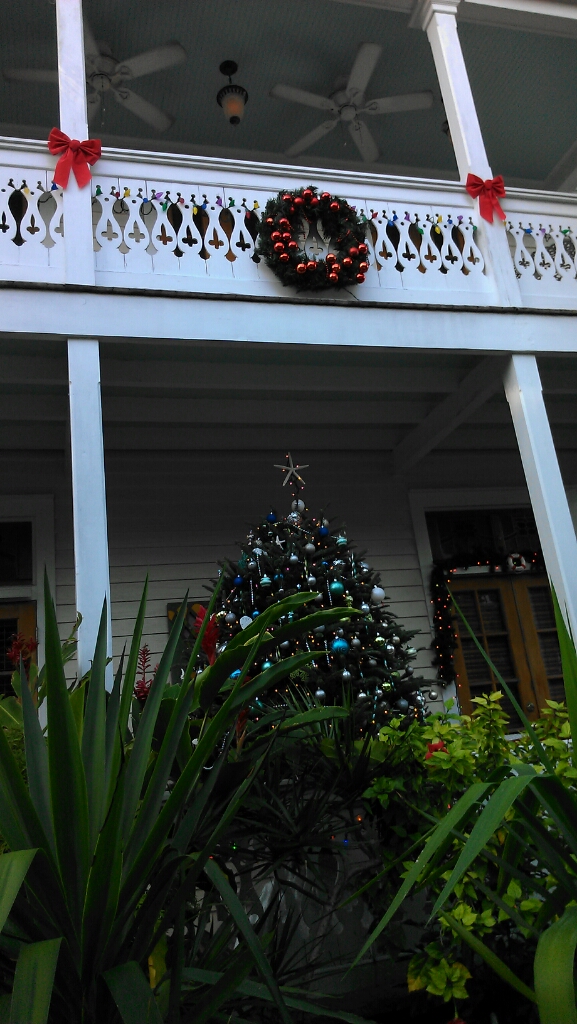 I used to work here on William Street. Cheyenne sniffed a shrub and I waxed nostalgic about this strange interim job I had in the receiving department for Fast Buck Freddie's. It was summer and we were air conditioning-free so we sat on packing crates and opened cases of weird dust catchers, unwrapped peculiar furniture and laughed at the collections of trifles people paid lots of good money for. One of my colleagues was an ex gang member from Southern California moved to Key West to be with his grandmother away from the hit squads. He was a funny kid with a huge afro that he seemed to hide behind if that were possible, until he got to know you. And the stories of gangland life came pouring out making my hair stand on end. He was half my age and seemed to have lived twice as much in a California I never saw when I lived in Santa Cruz, a middle class hippy university town far from Compton. 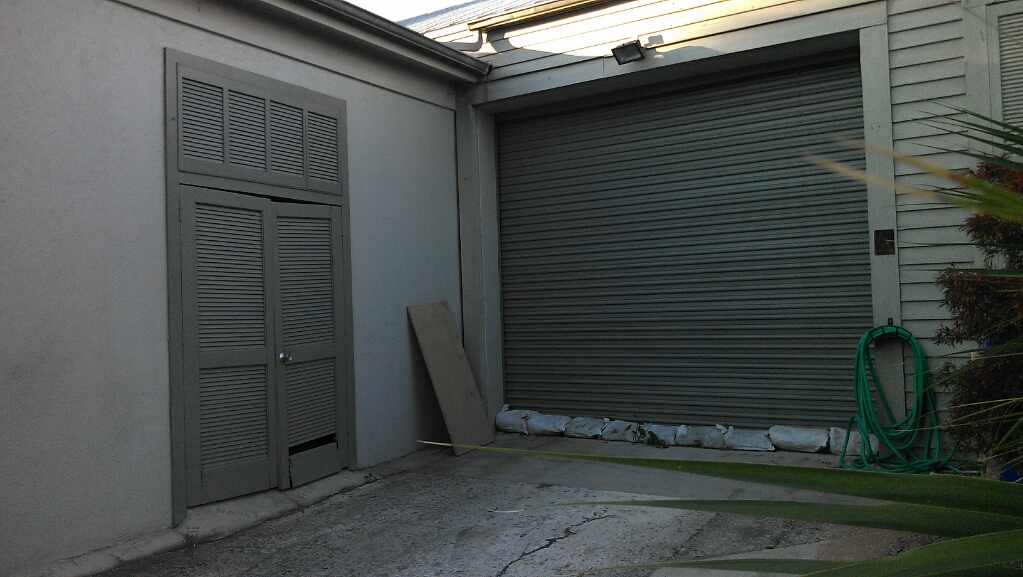 My other colleague was my boss who was about my age but smoked like a chimney and was so shriveled up he  looked like he could be my father.  He had a young child as I recall and his life seemed rather more hectic than I should have liked. We were a weirdly mis-matched trio but the life was rather fun and I felt like I was re-living my early years of employment when I held odd jobs in places I never expected to end up. I was  about nineteen years old as I recall when I got a job sorting cheese supplies for a grocery chain. Later I was a truck driver's assistant delivering food to supermarkets across London before dawn. I got to see the sun come up over St Paul's Cathedral on many mornings, and drank huge mugs of tea with true Cockney stall holders. Looking back I have no idea how I ended up working for Cullen's grocery stores anymore than I do how I ended up at Fast Buck's. Strange interludes in a life that has wandered all over the map. 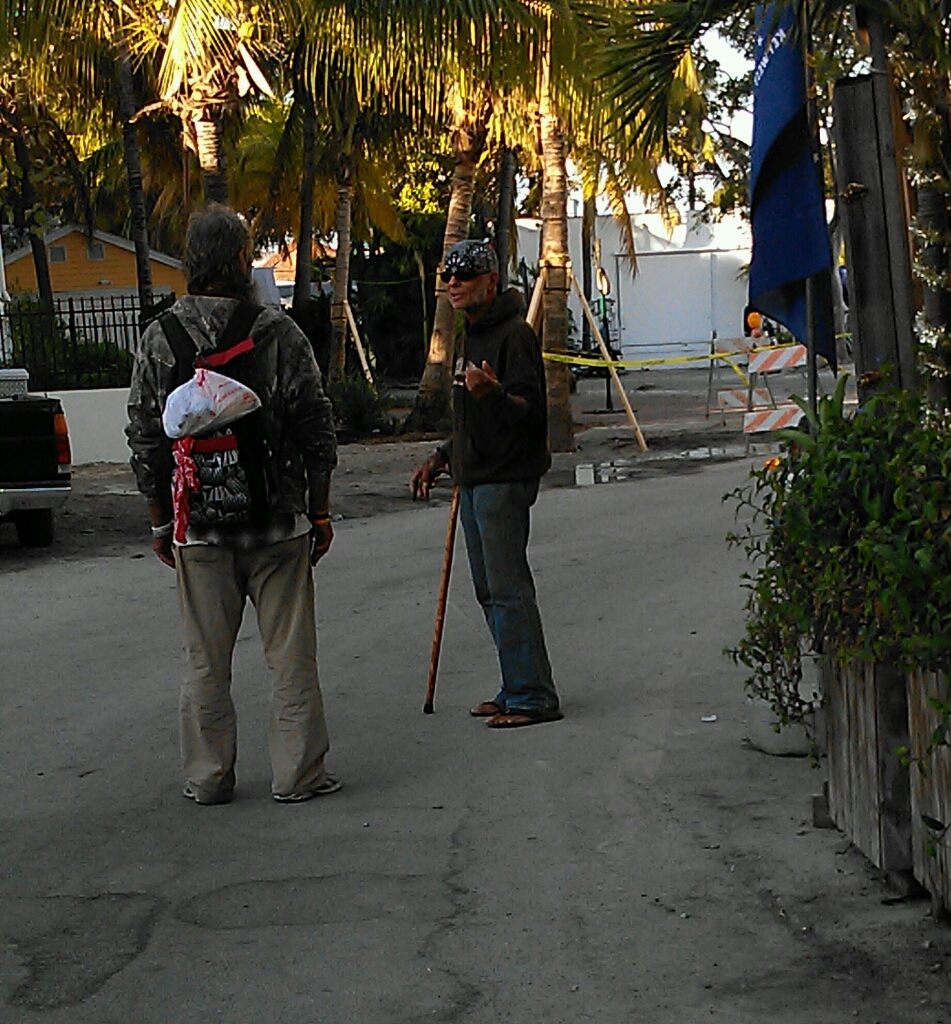 Cheyenne stalled on Lazy Way Lane sniffing something indelicate and fascinating and I overheard an animated conversation between two residentially challenged men.The one with the walking stick was telling the other guy about how hard it is to be homeless in Key West. He said his buddy gave up in despair and went home to Cleveland, which in December can be taken as a sign of true hopelessness. 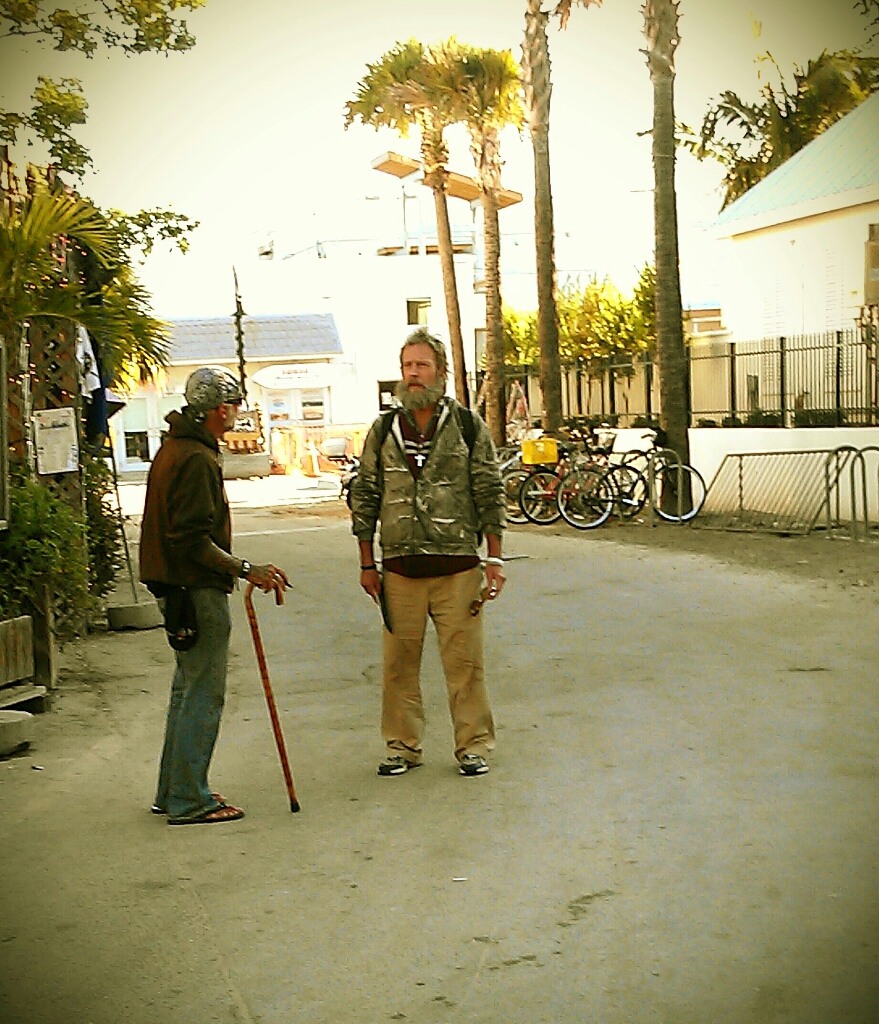 Then, further down the man on the bicycle was telling the woman very earnestly that something in his life, possibly his rooming arrangement just had to change. Cheyenne was on her way so the true nature of the drama got away from me. 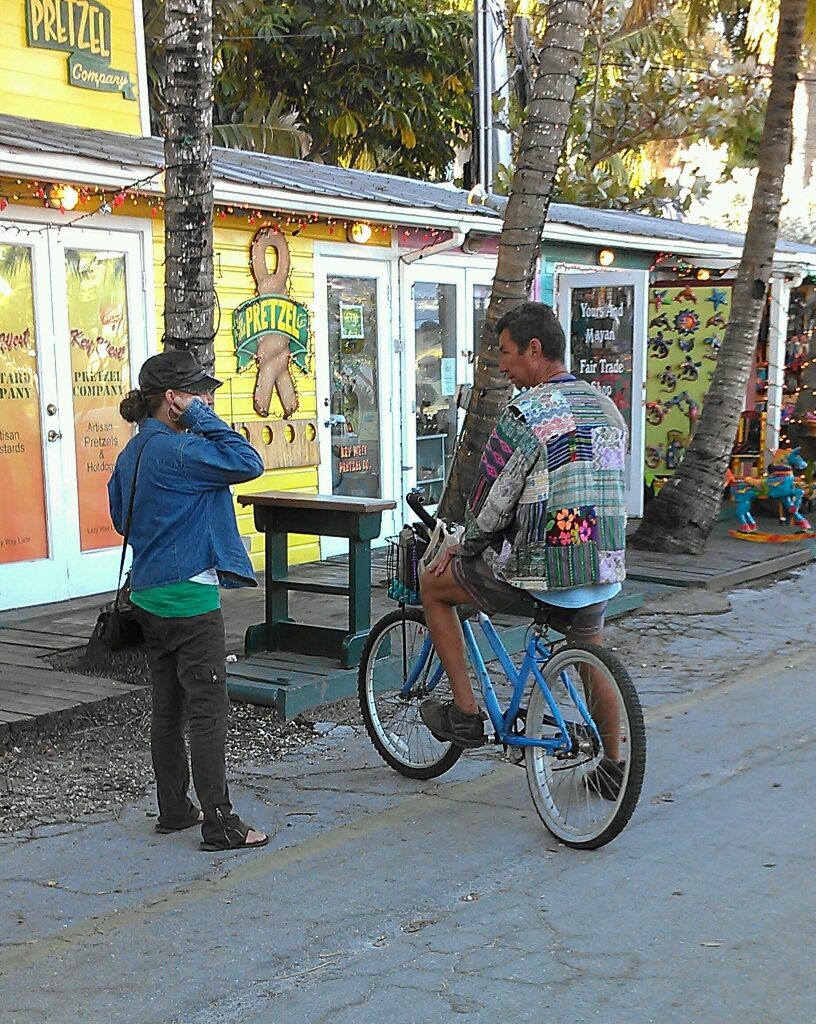 This dog still had a mission: 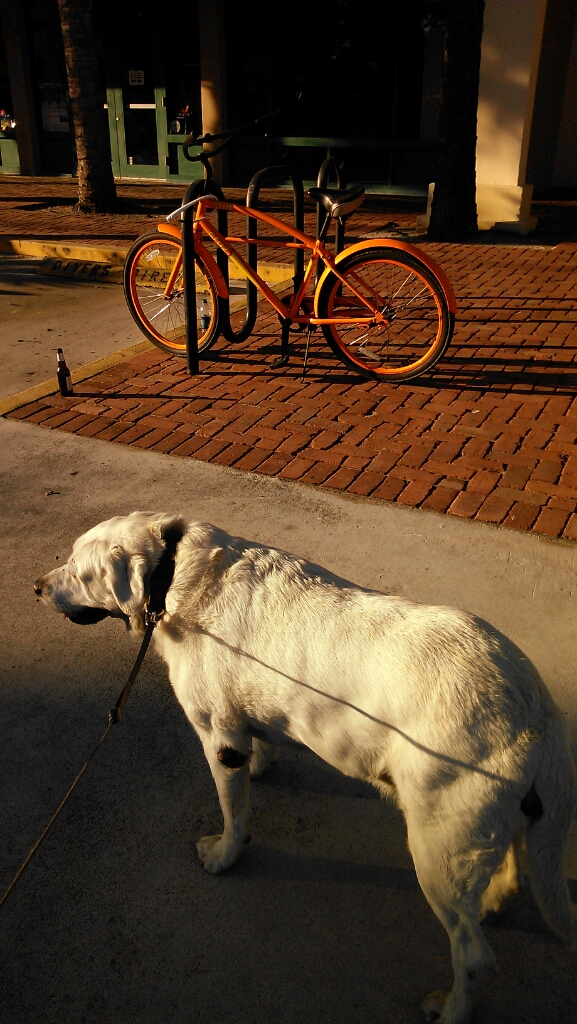 She managed, did my Yellow Labrador, to put herself in stationary poses in evocative places. I trailed along. 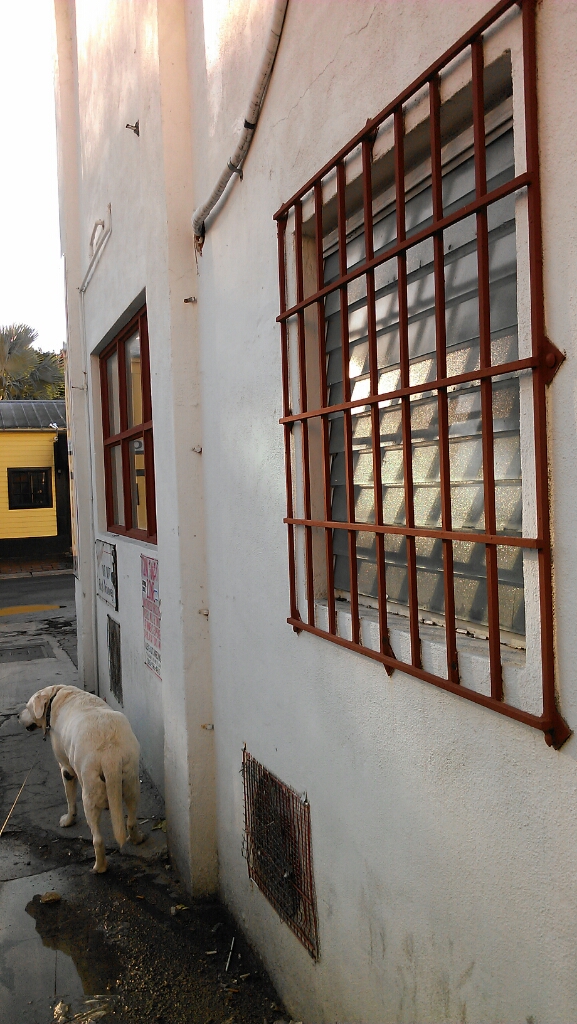 And there was another homeless dude at the bus stop on Caroline Street across from the Bull. No comment from him and Cheyenne brushed by quite rudely. 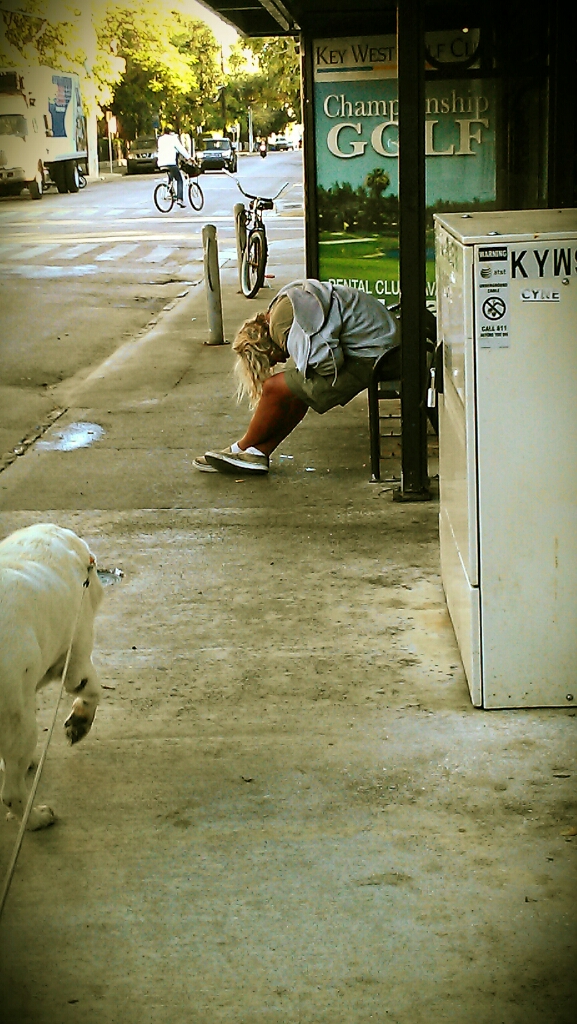 The evidence of the night before: 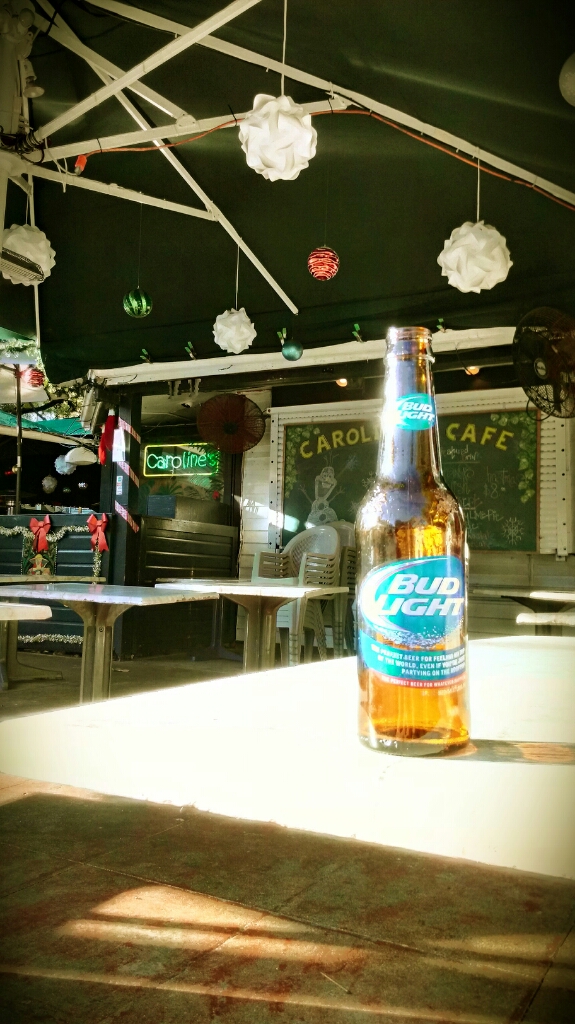 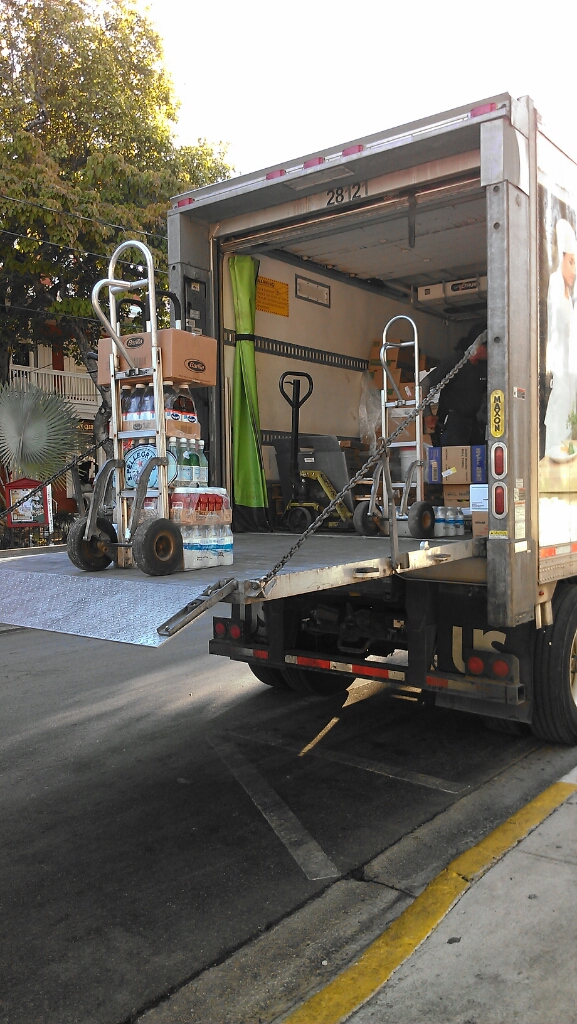 Tonight will be another round of carousing on Duval Street. I'll be working, as usual.
Posted by Conchscooter at 12:00 AM 3 comments: