I was stuck at the Circle K waiting for a friend to meet me so I had two choices, read my Kindle on my phone which was pretty enticing as I am enjoying Havana Blue, a detective story set in contemporary Cuba, or I could play with my camera to pass the time. 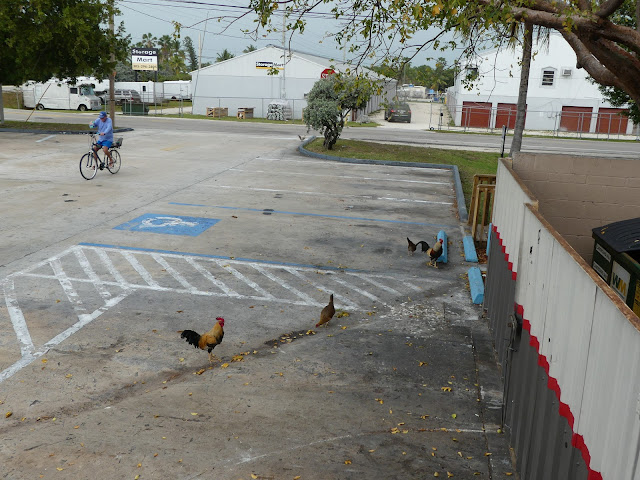 There is a surprisingly large cluster of chickens at the Circle K at Mile Marker Ten.  I am no great fan of chickens unless they are on a plate but from time to time I do have to acknowledge that they have their fans. 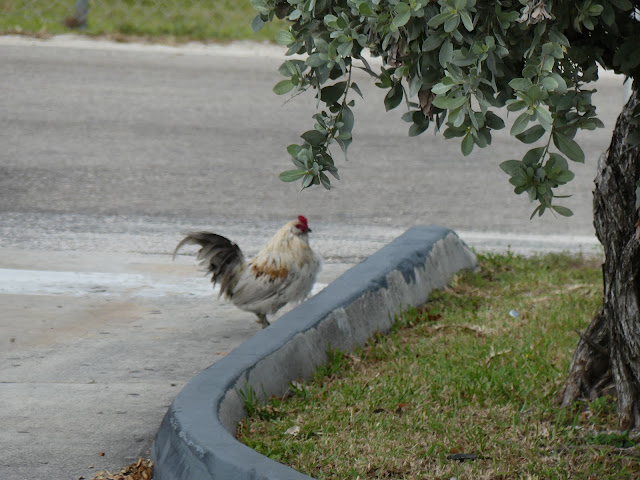 Visitors to the Keys seem to think iguanas and chickens are first rate public ambassadors and I can't stand either creature. Iguana's wreck local wildlife and chew people's gardens to death and have no natural predators in these islands. Chickens meanwhile are noisy and dirty scattering soil and mulch everywhere in their search for bugs.; 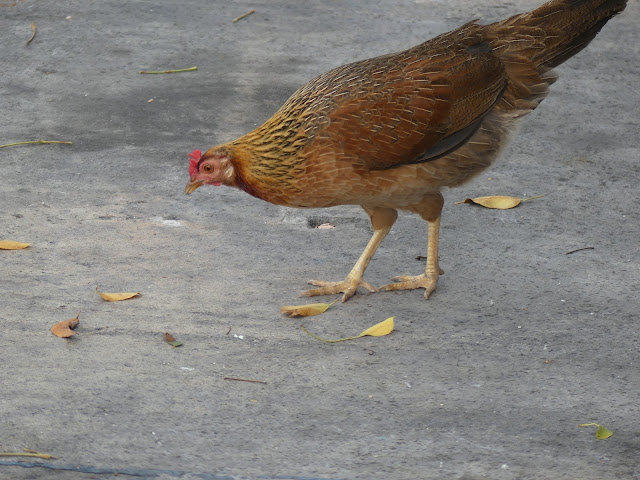 I grew up around chickens and their stupidity is legendary however when you consider the adverse living conditions and  their survival rate I'd say the Lower Keys public chicken population has higher than average intelligence. They can be meaner than snakes too. One chicken ran Rusty off her turf on Appelrouth Lane downtown one day. 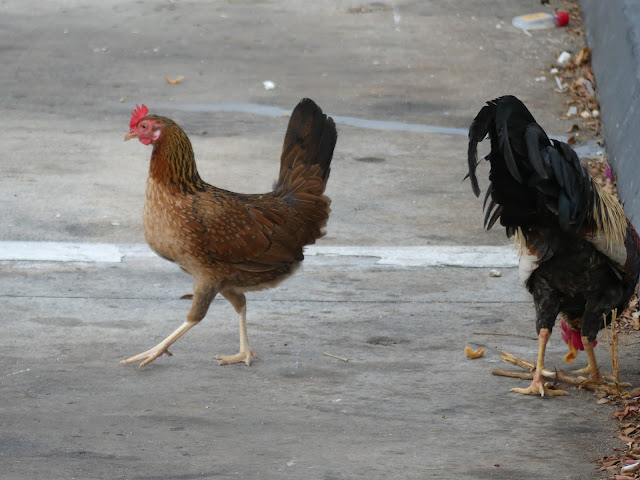 A face only a mother could love ( or a tourist): 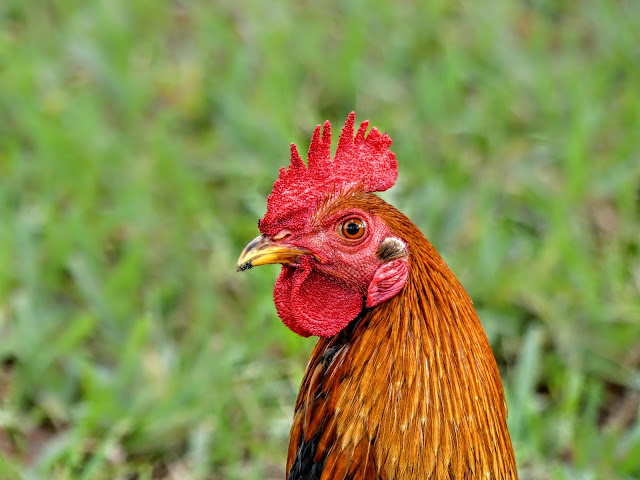 I like native birds like these ibis (below). They are quiet dignified and very swift at eating noxious insects. They don't crow at odd hours and they don't kick mulch across sidewalks. I think ibis are the ideal urban insect clean up crew: 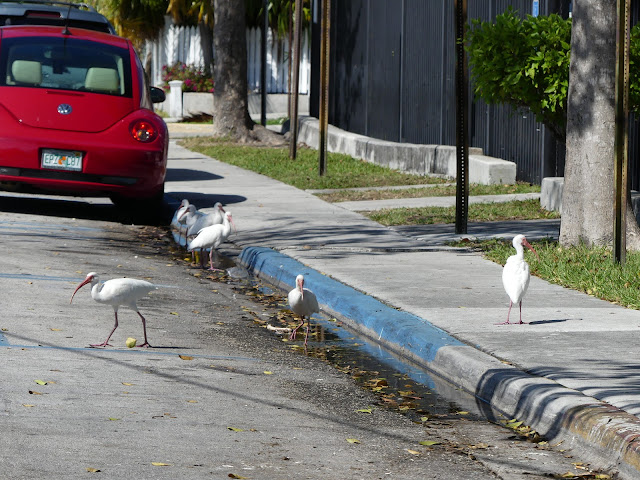 Check out this hole: 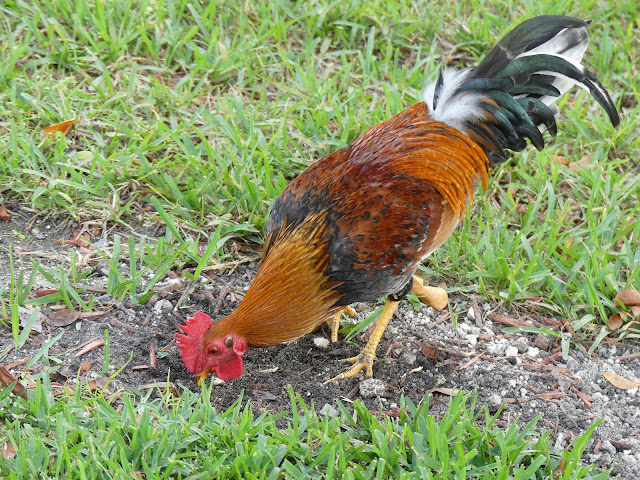 The source of Key West's free range street chickens is a mystery shrouded in myth. Some people think they came from Cub when refugees landed in the Keys with their prize cock fighters. This story makes no sense on so many levels I can't understand why it gets propagated so much. I don't recall any refugees in modern history arriving with roosters in their luggage; dogs occasionally have landed but birds from Cuba no, never. Plus if they did bring roosters who would they mate with to propagate the species on the streets? 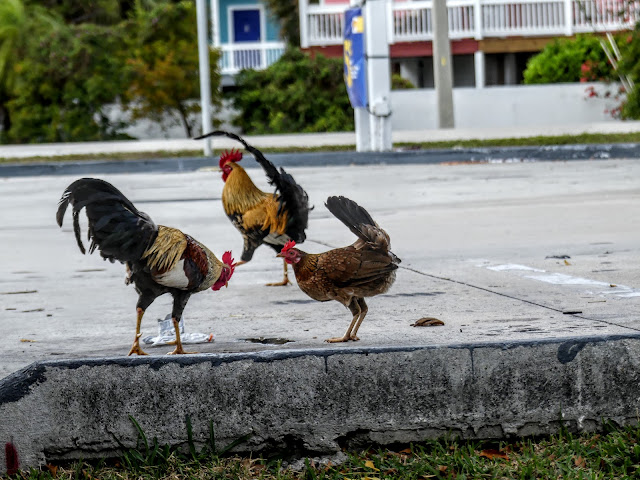 I have also checked pictures from the early 29th century and none of the folk art I have seen, by Mario Sanchez for instance or Depression Era WPA painters show any signs of chickens in the street. The literature of the era doesn't mention them either. I rather think they got loose probably in the 60s when downtown was collapsing and gradually they evolved into a protected species in the city and a source of tourist largesse. 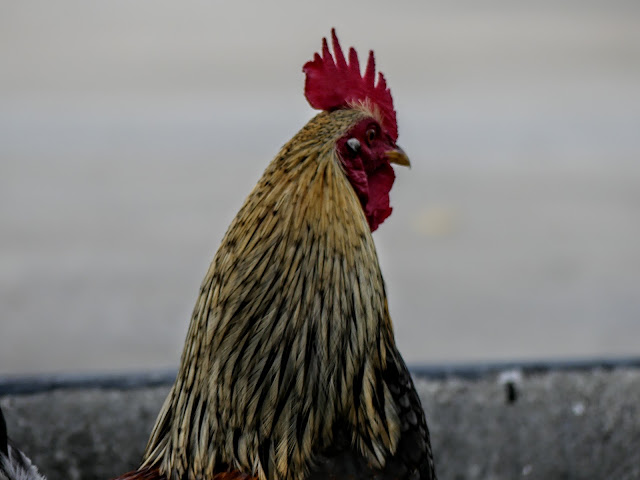 In any event here they are and seem bound to stay. 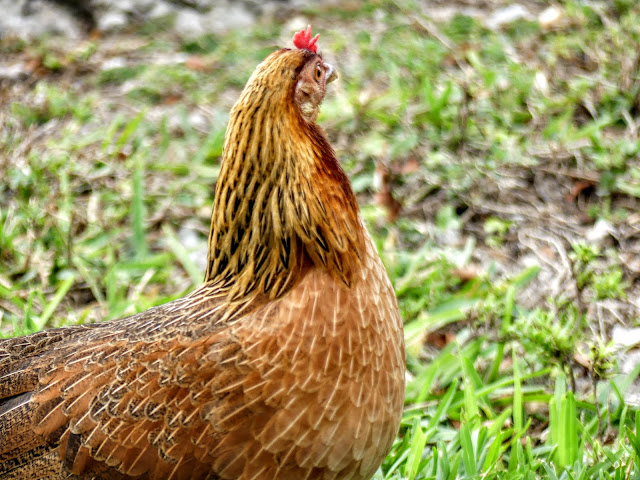 It's not that I hate chickens but I have no affinity for birds. People are fascinated by parrots but as far as I am concerned I am happy that they live decent lives and long may they do so, but studying them or trailing around behind them does nothing for me. I like dogs. 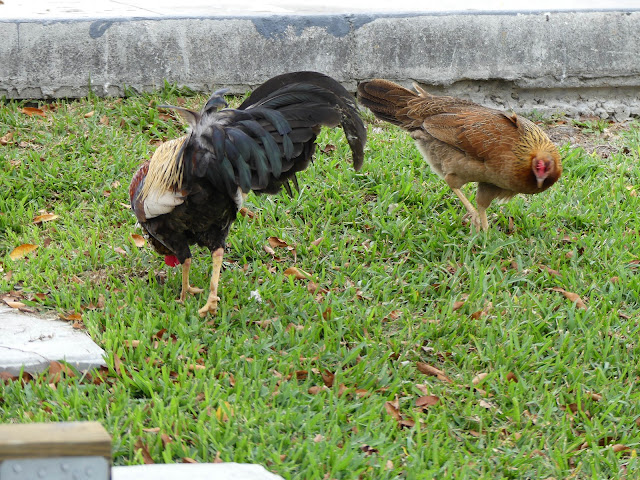 Chickens have been a source of aggravation too. They city hired a chicken catcher for a while but the humane traps he set out were sprung by well meaning chicken supporters so he had to give up did Armando Parra. I think he made more money from his line of authenticate Key West Chicken Catcher t- shirts than he did from his city bounty actually catching the birds.. 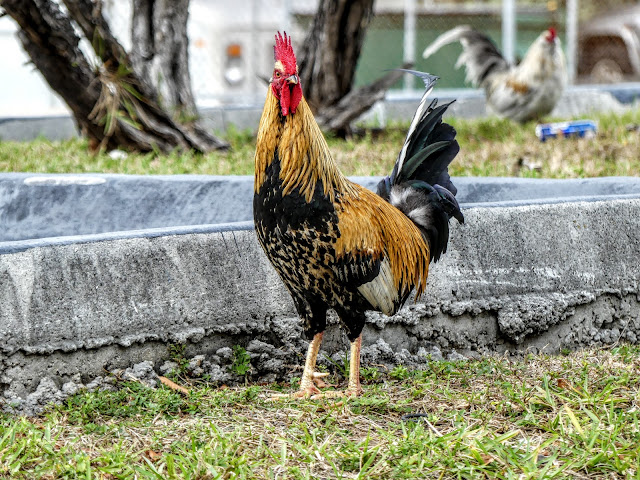 There are hundreds of these birds and their fate was much debated. The solemn promise from the city was that they would be rehoused at some sort of humane ranch setting somewhere on the mainland. Some opponents of the catching program envisioned a rather bleaker future like one of those Disney animal cartoon movies about secret slaughter houses from which the heroes have to escape. 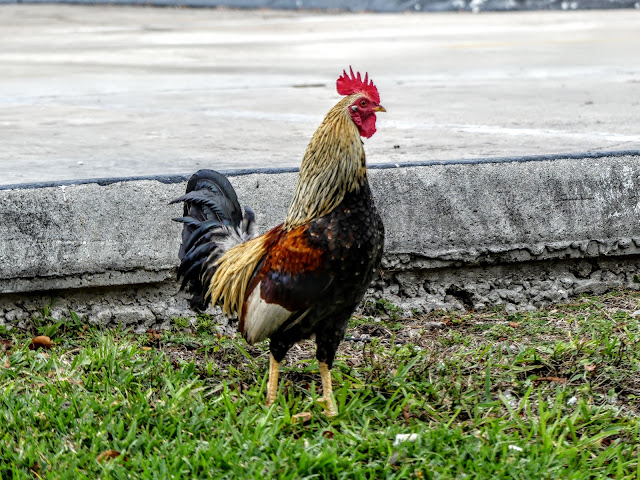 Chickens have their beauty certainly but they are noisy. And anyone who tells you they crow at dawn to herald the arrival of a new day are either misinformed or lying. They make a terrible noise any hour of the day or night. 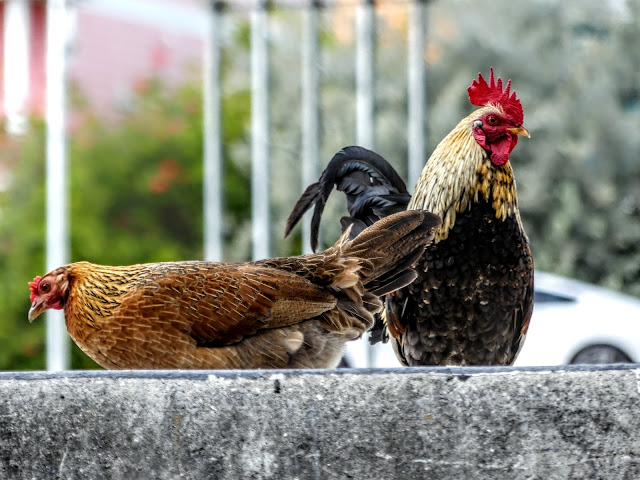 But they are adaptable, making lives for themselves on the streets and prospering while ignoring the human chaos around them. 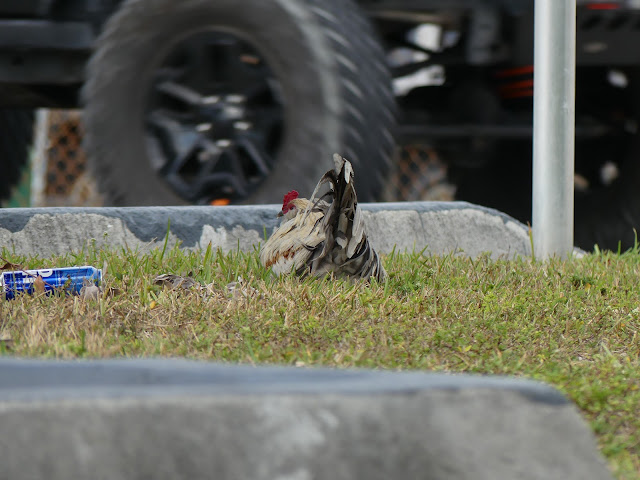 I watched them for quite a while bickering over scraps and strutting around like school yard bullies. 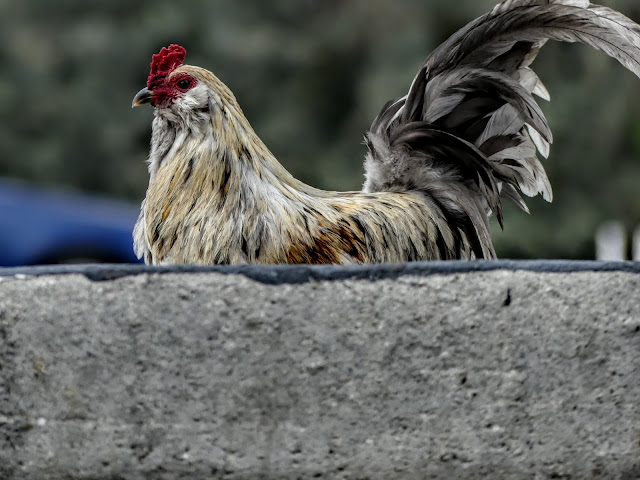 They moved off and I walked up to the deck to keep an eye on the parking lot as I waited for my ride. 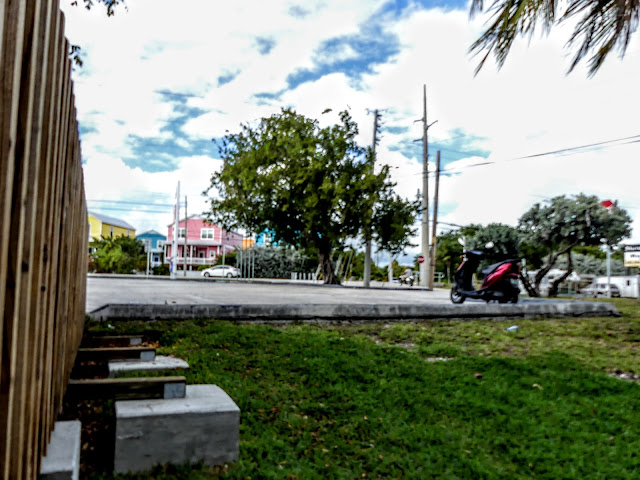 I don't love Key West's chickens but I don't wish them any harm. They aren't going anywhere and I suppose they shouldn't go away. It's all part of the pageant of Key West. 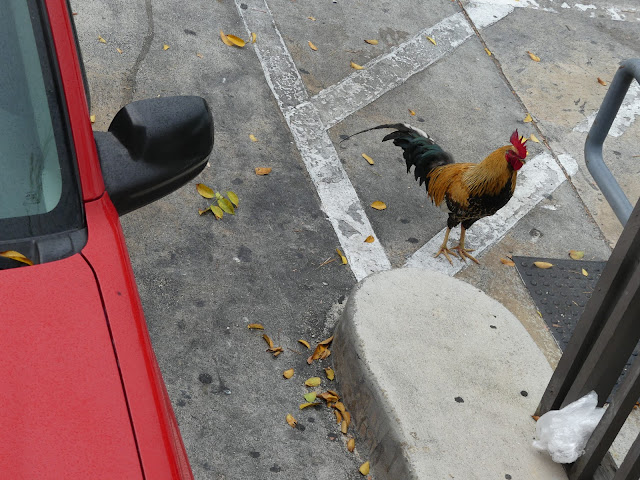