I was walking Cheyenne on the bridge linking Cudjoe to Sugarloaf Keys, a place where my Labrador likes to go to find bait fish and other unconsidered trifles dropped by distracted anglers. A couple of nights ago I saw this old dude drowning worms all by himself on the bridge and I knew he was a snowbird because he was busy ignoring the only other human in sight. We trudged on by and found his Michigan tagged tank parked beyond the vehicle barricade thirty feet behind his now illegal vehicle, as snug up to the bridge as he could possibly drive on the ill defined FOOTpath. 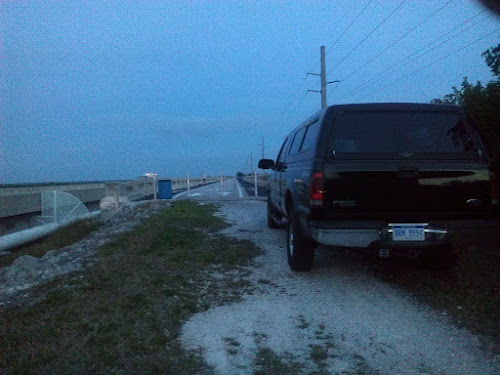 Cheyenne and I kept walking, which I am now forced to admit is becoming a lost art, is the simple act of putting one foot (or paw) in front of the other. Even by motorists not displaying a handicapped tag.

Posted with Blogsy
Posted by Conchscooter at 7:46 PM 1 comment:

Visitors to Key West like to take their picture at the Southernmost Point, a rather garish red yellow and black cone placed at the end of South Street, somewhere close to the southernmost piece of land outside the neighboring secretive Navy Base. Good enough for most people's photo albums. Then if they turn north on Whitehead Street they will eventually, after passing Hemingway's home, and the lighthouse and the Green Parrot Bar, they will eventually reach Mile Zero, the very end or beginning of US Highway One. Mile Zero is marked by a green rectangle on a lamp post for some reason placed at the corner of Whitehead and Flemng Streets, next to a collection of imposing brick buildings. 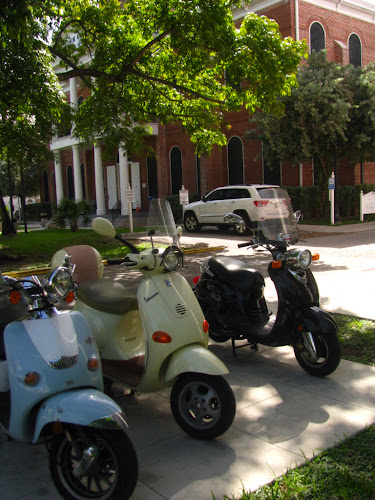 There is a connection between Mile Zero and the classically styled buildings set back from the street named for one of the four Anglo purchasers of Key West, John Whitehead (John Fleeming was another after whom Fleming Street is named). It turns out it is traditional to measure distances from the county courthouse and as Key West is the county seat of Monroe County so this is where Mile Marker Zero has to be placed. 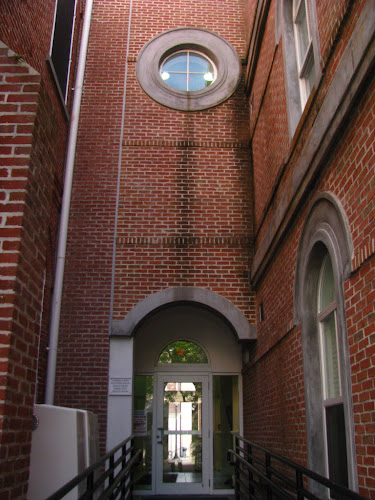 It used to be that south Florida was pretty much uninhabitable that's to humidity, disease and. A general ack of amenity. There were no roads, no fields and no prospects for any, so as the soldiers pushed the Seminole Indians south there was very limited settlement activity in their wake. The city of Key West, founded in 1828 was doing fine as a stopping off place for shipping in and out of the Gulf of Mexico. Indeed Key West was a very cosmopolitan place with the outside world coming here as ships passed through from all over the world. As a result the wealthiest city in the state was made the seat of Monroe County, a stretch of largely uninhabitable land that covered the southern half of the state. A slow walk through the county building shows all sorts of stuff relating to the county and it's past. A map of 19th century south Florida. 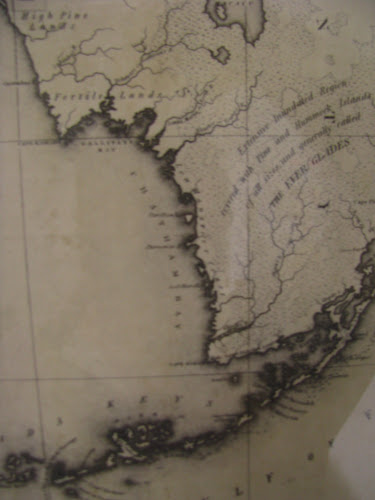 As farmers ranchers and assorted white settlers moved into central Florida encouraged by railroads and suppression of the Seminoles they cut off chunks of Monroe County to create their own local governments, known today as Polk, Hendry, Lee and Collier counties among many others. Today Monroe County still encompasses a large chunk of mainland south Florida occupied by half a dozen Anglo families living along Loop Road, Seminoles still live in and around the Everglades and National Parks workers live in mainland Monroe County. Ask a tourism center and Monroe County equals The Keys but anonymity seems to suit those who choose to live in the "other" Monroe County residents. But Key West has always been the most colorful place in the county, and most likely in the state. I cannot say that electing Tony Tarracino as mayor was the most enlightened vote but in light of the state of modern political leadership in the county one can't really find too much fault with a man who figured a strong sex drive was the most important human trait. It's not the top political priority one usually imagines, but like I say Key West tended once to lean toward the particular and I miss that attitude. It's hard to imagine contemporary city voters taking a smuggler and gun runner seriously as candidate for mayor, and you could argue its their loss. 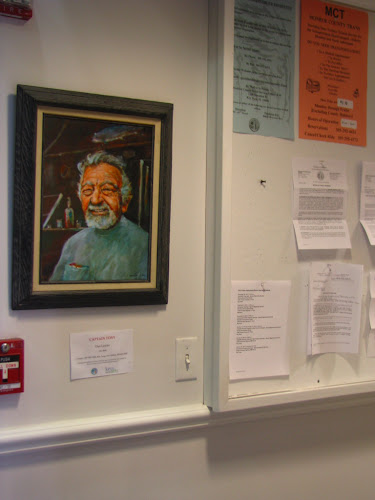 Mario Sanchez is remembered elsewhere on one of the walls of the county building. He was a Conch who amused himself making carvings of his life in Key West from the early 20th century. He was honored as a noted US folk artist outside his home town and original pieces cost tens of thousands of dollars now that he is dead. Below we see a copy of his representation of the county building at 500 Whitehead Street, pinned to the wall next to the ...electrical room?! 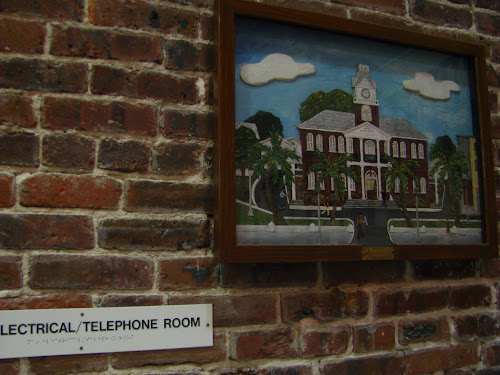 I miss the notion that public buildings should not only function as public spaces but they should be built as symbols of permanence. I like the wood and brick interior of the courthouse as much as I enjoy seeing te traditional classical design of the exterior. 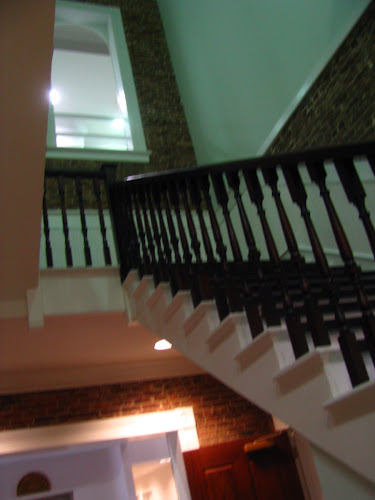 And there is of course the crude requirement to provide for basic needs. Generators and radio communications climb apparently at random over each other behind the classical facades. The courthouse has been replaced by a rather more attractive building, supposed to cost $13 million dollars but ending up closer to eighteen. The. Some bright spark figured little Freeman Justice Center has no lobby to enable the public to shelter out of the weather while they wait to parade through the insecurity checks now required in public buildings. So the are spending another $600,000 to build a lobby. That I noticed the shortcoming immediately when I reported for jury duty just goes to show how impractical and short sighted are modern architects. 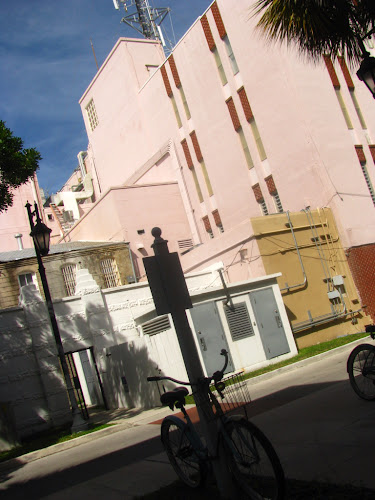 It's not easy operating a county a hundred and twelve miles long and rarely more than a mile wide, not forgetting the land on the mainland, and budgets are strangled by residents who demand services but are reluctant to pay for them. Thinking is not encouraged which is why peoplehotpgahnthe monument at the Southernmost Point and don't wonder why it is clearly apparent it is not the southernmost piece of land. 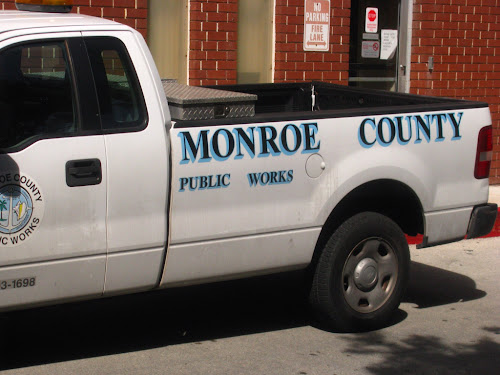 Tony Tarracino has been widely quoted as saying that ego and a tremendous sex drive are the tools for success. Brains he was fond of saying "...don't mean a shit." Cute of course, and mildly amusing but not a recipe for success as life gets more and more complicated in the town where Tarracino wanted to limit growth and who signally failed. The city of Key West is struggling to cope with issues of growth and change while Monroe County is so silent as to appear to be on a different planet. Less colorful perhaps, and also it seems less noisy, but whether or not the county represents the citizens as effectively as the city is not at all clear. The city has no permanent home at the moment as plans are argued over endlessly, with the Glynn Archer school leading the race so far for a new City Hall. The county has its brick headquarters sitting solidly on Whitehead Street largely unnoticed by all those people who wander by looking for Mile Marker Zero. Change comes slowly to the county.

Posted with Blogsy
Posted by Conchscooter at 1:01 AM 1 comment: