From http://www.smithsonian.com   this essay about the emotions that dogs may feel. At this stage it is all conjecture but it's conjecture whose conclusions thus far I like (!). So I am reproducing the paper here, to support my theory that letting my dog choose where and how to walk is good for her mental health. She seems happy, I enjoy her company and the vet says she is doing very well for a Labrador of her advanced years.

For the first few decades of his career, Emory neuroscientist Gregory Berns studied the human mind. Using fMRI technology, which tracks the flow of blood to different areas of the brain, he sought to find correlations between people’s internal mental patterns and their real-world behaviors, decisions and preferences. Then, in 2011, he took on a new object of neuroscientific study: Canis lupus familiaris, otherwise known as the domesticated dog.

Instead of merely studying canine behavior, as has been done for years, he and his colleagues began scrutinizing the internal architecture and patterns of dogs’ brains, using the same tools they rely on to better understand the brains of humans. “I’ve always been a dog person, and when my dog died, a pug named Newton, it planted a seed in my mind,” says Berns, who published a new book on his recent work, How Dogs Love Us, last week. “It got me wondering about how dogs view their relationship with us—if he had loved me the same way I had loved him.”

Just looking inside inside the canine brain, however, posed a formidable challenge: Getting an accurate fMRI reading means that the subject has to stay almost perfectly still, moving less than a millimeter from one moment to the next. Using anesthesia or restraining the dogs would ruin the experiments, producing an image of an unconscious or anxious dog instead of a comfortable, alert one. To solve the problem, Berns recruited dogs from the local community—starting with a dog he adopted after Newtown died—and gradually trained them to climb up a series of steps into a table, rest their head on a pad inside the fMRI’s inner tunnel and sit still for 30 seconds at a time as the machine does its work. 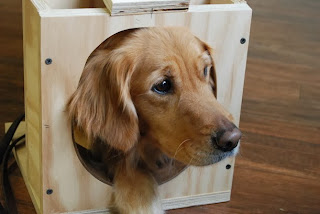 To deal with the device’s noise (which can surpass 95 decibels, equivalent to the sound of a jackhammer 50 feet away), they taped earmuffs to the dogs’ heads and piped in ambient noise over loudspeakers, so instead of the machine’s sound beginning abruptly, it gradually arrived over background noises. In total, they’ve successfully trained about a dozen dogs to voluntarily participate in their studies. The research is still in its preliminary stages, but as Berns’ team begins to scratch the surface of the canine brain, they’re finding something surprising—in several ways, its activity mirrors that of the human brain to a much greater extent than expected. 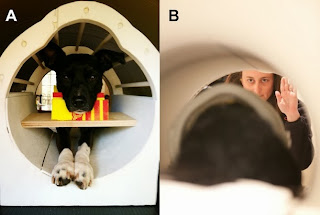 As part of their first paper published on the work in 2012, they trained dogs to recognize two different hand signals: one that meant the animal would be given a piece of hot dog imminently, and one that meant no hot dog. As they hypothesized, the first signal triggered elevated activity in an area called the caudate nucleus, which is rich in receptors for dopamine (a neurotransmitter involved in the sensation of pleasure). In humans—and in dogs, the research indicated—caudate activity is related to the desire to have something that causes pleasure, and the satisfaction involved in obtaining it. Subsequent work revealed more unexpected findings.

As part of a second experiment, they had dogs sit in the scanner and exposed them to smells of humans (from either their owners or strangers) and other dogs (from either dogs they lived with or unfamiliar dogs). “We wanted to understand how dogs recognize other people and dogs in their households,” Berns says. Again, they saw increased activity in the caudate, but only as a result of one of the scents. “In this case, the reward system only seems to activate in response to the smell of a familiar human, which is pretty amazing,” he says. To further probe how the dogs’ brain activity correlates with the actions of humans they know well, they put the dogs in the fMRI and had their owners leave the room, then walk back in.

This, too, triggered activation in the caudate. Berns interprets these results as indications that, in some ways, the mental processes of dogs may not be so different from those of humans. They’re close enough, he suggests, that we can safely describe them with words we don’t often apply to animals: the mental activity represents emotions, and perhaps even constitute love. “At some fundamental level, we believe the dogs are experiencing emotions something like we do,” Berns says. He admits that the idea is controversial. But, he points out, the research suggests that the human brain and canine brain aren’t as radically different as we might have imagined.

“Obviously, dog brains are much smaller, and they don’t have as much cortex as we do, but some of the core areas around the brainstem—the basal ganglia, which the caudate nucleus is part of—look very much like those in humans,” he says. Dogs might not have the hardware necessary for complex thoughts and higher-level reasoning, the thinking goes, but they do have the relevant structures for basic emotions. This also makes sense from an evolutionary perspective: We evolved the heavily folded cortex necessary for high-level thinking after we diverged from all other animal species, but areas like the basal ganglia developed beforehand, so it follows that our ability to feel emotions produced by those areas existed way back in our evolutionary history, in ancestors that we share with many other mammals, including dogs.

Dog lovers mind find these ideas obvious, but Berns’ work has attracted a fair amount of criticism. One of the biggest complaints is against his use of words like emotion and love for dogs—their attachment to us is simply a result of conditioning, some say, entirely based on the desire for food, rather than the deeper emotional connections we feel for other humans.

But Berns hopes to respond with future fMRI work, which will compare brain activity in dogs being fed by automated mechanisms with that of dogs being fed by humans. He hopes to show that dogs do develop qualitatively different relationships with humans, underscoring the strength of those attachments. He took his ideas to what some might call as a rather extreme conclusion earlier this month in the New York Times, in an op-ed he penned with a provocative headline: Dogs Are People, Too.

If animals truly are capable of emotions we normally consider characteristically human, he argued, they should no longer be treated as mere objects, or property, but instead be given some of the rights we associate with personhood—namely, a respect for their preferences and well-being that would lead to the abolition of things like puppy mills and dog racing. There’s obviously a long way to go—both in terms of scientific evidence and policy changes—before dogs are treated anything like people.

But Berns cites a recent Supreme Court decision that invoked neuroscientific evidence (specifically, the finding that the juvenile brain is less developed than a mature adult’s, and thus should not be subject to the same punishments) as an indication that our laws will inevitably follow the science. The next step, then, is for he and his colleagues to keep peering into the minds of dogs, finding out how deeply the mental similarities truly go.

Posted By: Joseph Stromberg — Biology,Mammals,Psychology
Posted by Conchscooter at 12:30 AM 2 comments:

How To Keep Your Dog Happy

Bill Butler Park early in the morning. That's how Cheyenne likes it when Daddy has a day off and nowhere particular to be. 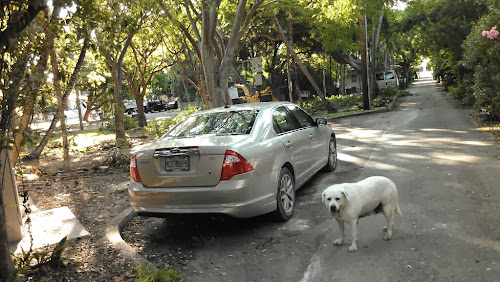 Not all dogs get the attention Cheyenne gets, not,all dogs live indoors either. 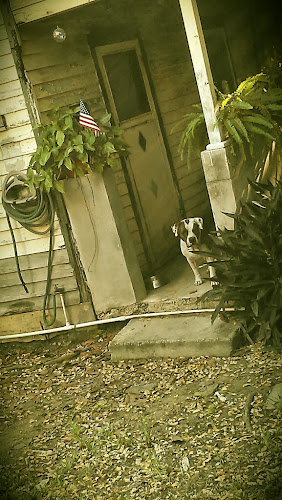 This guy lives in the yard of a crumbling house off an alley between Elizabeth street and Bill Butler Park. Cheyenne has the winning personality that wins over prisoners too. Not really but sometimes she deigns them with a friendly sniff through the bars of their captivity. 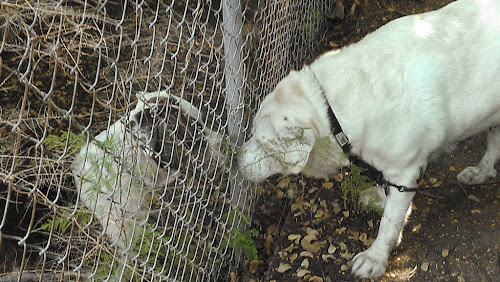 Checking out the cat food bowl and finding it empty. Had it been full I'd have engaged in a tug of war but my dog will not be denied food if she thinks she can get away with it. The vet gave her a check up and pronounced her in excellent health for her age, almost 13 I think. She has been showing some signs of limping but we increased the dose of the magic pill I can't spell (con droit something) and as usual Dr Edie was right and Cheyenne is walking like a puppy again. 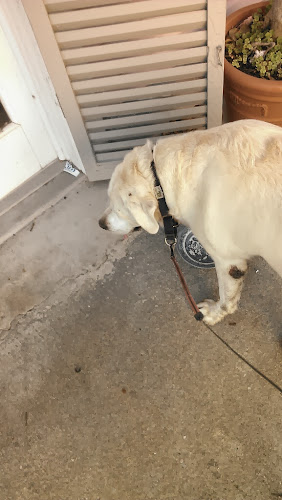 It's bloody difficult to keep her slim with her constant pursuit of nourishment. Almost as grotesque as people who ride scooters and then park them like this, which is a big fat fail. 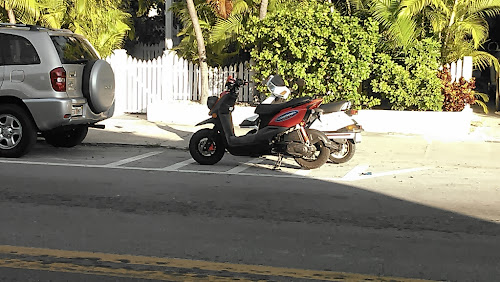 And when not meeting caged dogs or eating cat food one lies in a puddle for refreshment. Remember this is the Southernmost City and it's still hitting eighty five degrees daily in November. 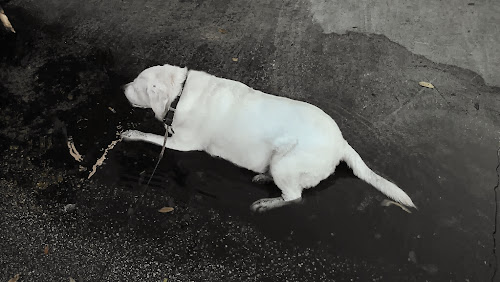 The thing about walking Cheyenne is I get to see stuff and I get to ponder stuff so while I'm keeping her happy I am amusing myself. See the Eden House and therefore think of Goldie Hawn. Good movie. 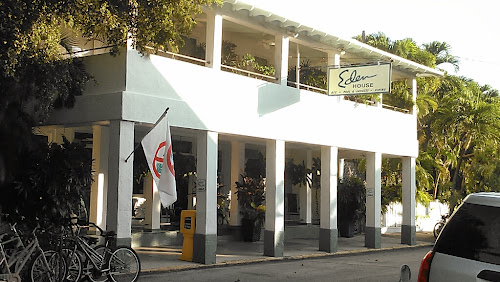 I asked my wife where would she live if she had money enough to choose anywhere. She got lost in thought for quite a while and when I had forgotten about the question she asked if money was going to be an issue in her mythical new home. Not at all I said magisterially and she thought about it a bit more. So then I could travel anywhere I felt,like from my home she asked as though I had the power to actually make all this real. Sure I said. Well she said I think I'd stay right here. Your can see why. Here's a Key West conundrum. We got as far as I was letting Cheyenne get from the car to prevent total exhaustion and we passed the Stock Island Produce shop which is located on Whitehead Street in Key West. Why it's called that I couldn't say. Do they grow produce for export from Stock Island? 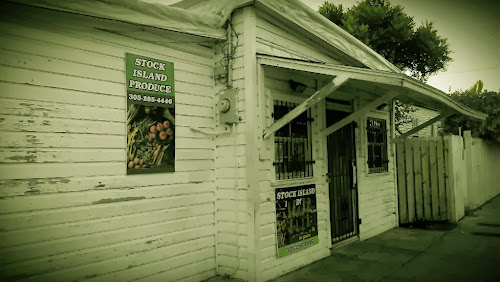 I do enjoy walking my dog. What a dweeb.