Finding oneself out of town for the Thanksgiving holiday, my first vacation since my hospitalization last year, I had a few goals in mind. One was being able to drive all day, something I hadn't been able to do since getting my driving privileges back along with the use of my legs. Happily, as I do like road trips, I drove all the way to New Orleans and back by myself with no help from my passenger. Which made my wife happy as she likes to "navigate" as she puts it while making a nest in her seat and doing everything from learning Italian to studying potential stopping places on her phone while I tune the radio and enjoy the drive. Our trip around the Gulf Coast also put us in the path of some fairly gnarly temperatures last week which was a useful reminder of why I like the tropics and how I have stayed put in the tropical tip of Florida for two decades. 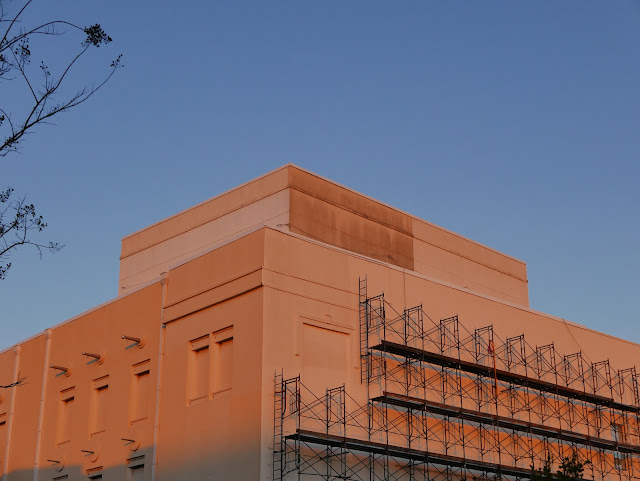 This series of photographs taken last Friday morning before we left Pensacola had my hands freezing despite the slowly rising sun. If I were to point out it was a balmy 52 degrees that might take away some of the heroic nature of my arctic dog walk along the city waterfront. Like it or not it felt cold to me and the early morning chill was a reminder that when we take to the road in a few years we will need to own some more suitable winter type clothes. I retire in November 2022 and driving out of the Keys at this time of the year one needs to be prepared to encounter frost north of Lake Okeechobee. 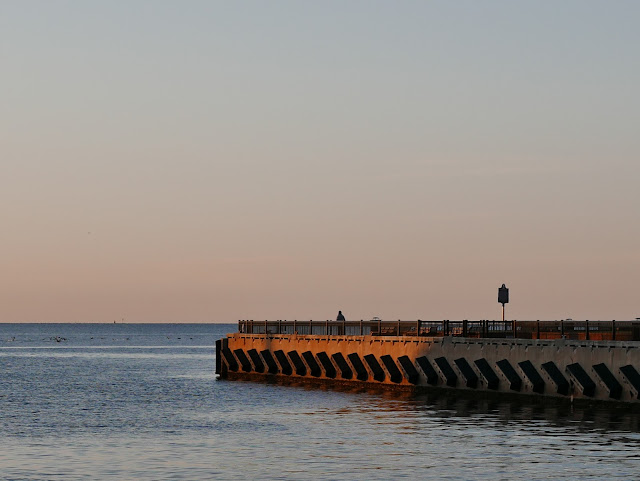 As  cities go Pensacola is a pleasant place fueled by a military economy and summer beach visitors, but it offers what many consider to be a southern Alabama culture rather than the sort of Florida immersion a trip down the peninsula yields. Historically Spain ruled over the land we call Florida (the Flowery State - la Florida - the Spaniards called it) and when they yielded the territory as a quit claim against American settler demands, which also happened to involve a brief war with the US, the new territory retained the shape we know today. So even if this part of the coast should ethnically belong to Alabama it came to the United States packaged as part of Florida, a massive insect filled swamp of no use to anyone in those days except renegade Indians and runaway slaves. The Seminoles fought heroically to be left alone in their swamps but like the Spanish were overcome by superior firepower even though no one wanted to live between the largest northern town of Tallahassee and distant Key West where mosquitoes were endemic but bearable despite many yellow fever deaths. So Tallahassee in the dry pine forests became the capital of a territory which was not going to develop its full economic potential until the arrival, after World War Two, of cheap consumer sized air conditioning and the importation of sun loving northerners on the run from their dreary lives Up North. 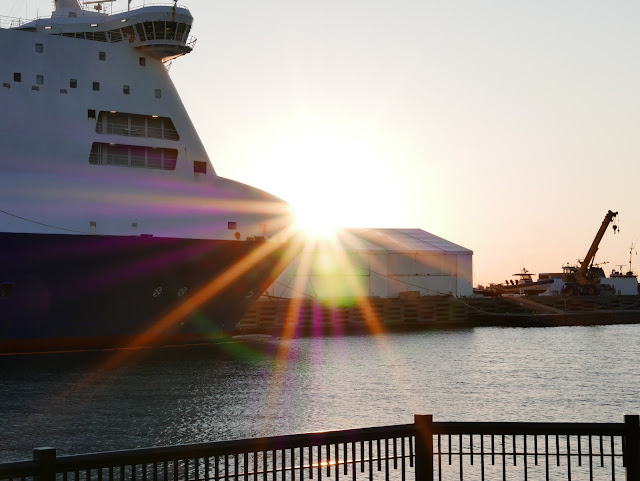 I needed no air conditioning on my walk which was a reminder how limiting it can be to get used to tropic air temperatures on a sliver of land the size of extreme South Florida. Pensacola, 800 miles from my home felt very alien to me despite the fact I was still in the Sunshine State. Live oaks, spindly frost proof palmetto palms and local foods that resemble New Orleans' finest, gumbos and pecans and not South Florida plantains and black beans. 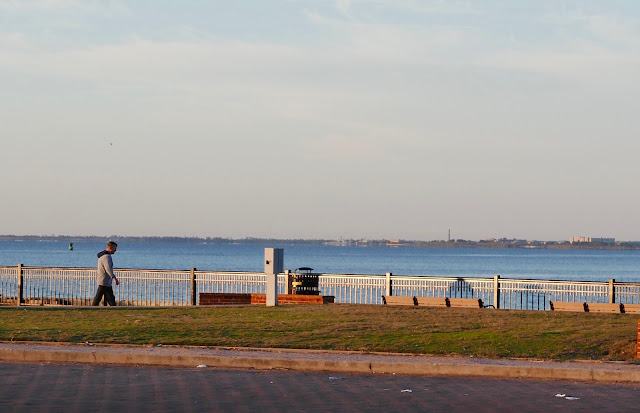 Rusty was delighted by the weather despite his entire life spent in and around Miami and Key West. He took long walks with me every day and lazed around in the sun and slept like a dead dog at night, draped wherever he found himself, snoring loudly and without restraint. He got into the spirit of Thanksgiving vacation by doubling his intake of food to compensate for his high energy cold weather output, finishing everything put in front of him and staying by his bowl until he got more. He usually is a rather reserved and picky eater but not when he is dealing with cold crisp weather apparently. He  kept my wife busy filling his bowl. He finds her food preparation superior to mine so I feed him only in moments of dire crisis and he looks at me rather askance when I prepare his dinner. 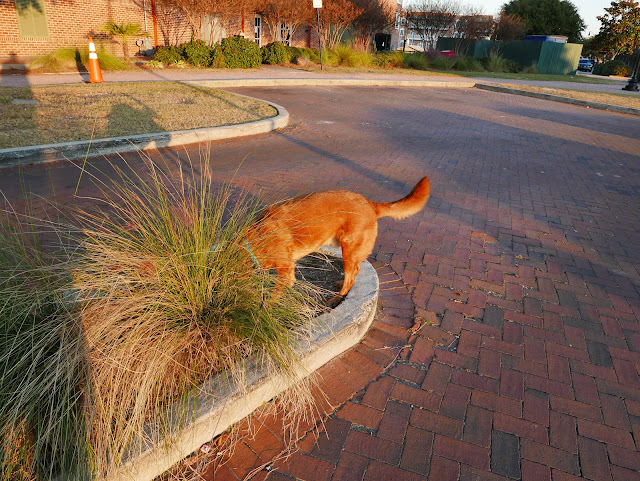 I pointed out to my wife this may be our last road trip in a car as we hope to hit the road next summer in our van hopefully converted by next July into a home on wheels. Yesterday I began the beginning of the end of my career at Key West PD as on December First I officially retired and started my deferred retirement plan which will see me working up to five more years, the maximum allowed though I hope to be done in three. While I work these next years the city puts my retirement payments into my deferred fund which I take as a lump when I leave and that is in addition to my lifetime monthly payments which I have accrued in the normal way to this point. The idea is to move older employees out of the workforce to allow room for job mobility in state and municipal  employment. Old folks go out with a golden handshake which means youngsters can get promoted into these valuable jobs with defined benefit pension plans. Suits me as I know when I want to go and the time limit is no burden. And a few young Floridians get jobs with proper benefits and job security. 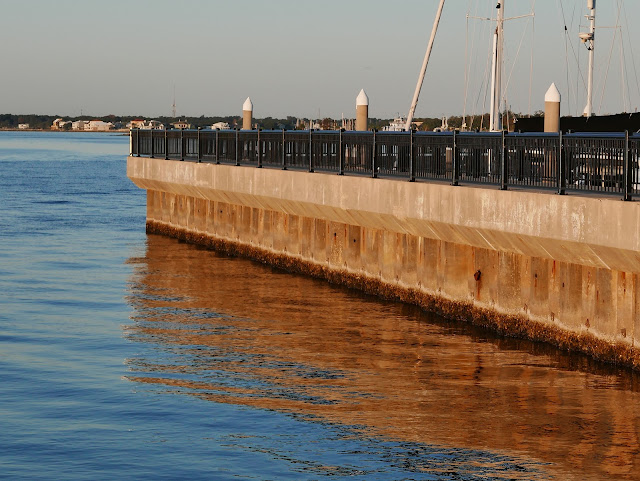 Therefore we both spent some time pondering what it would mean not to have to "go home." I wonder how Rusty who craves stability will find life on the road, while my wife and I both have a history of traveling and know better what to expect.  I am glad my wife is there to not only feed Rusty but to keep me towing the line so we can retire with dignity and a measure of security in an insecure world. She the teacher is doing the same deferred retirement plan with a lump sum and permanent monthly payments. 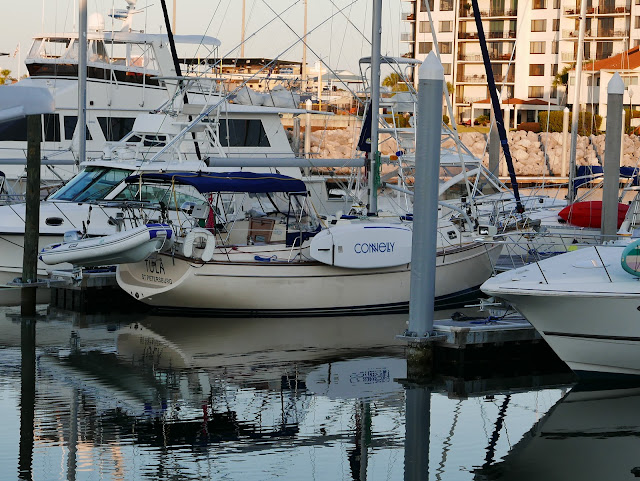 It's a mixture of feelings for me, thinking about being away from the ease and warmth of a life in the Keys and Pensacola was a reminder how small and privileged is the tiny area is in which I live frost free. No one would accuse the Florida Panhandle of being plagued with bad weather but my wife and I were talking seriously about heat options for the van after a couple of nights of 45 degree lows. We both understand how lucky we are to have time to wander and be paid to do it. I hope we can stay below the snowline. 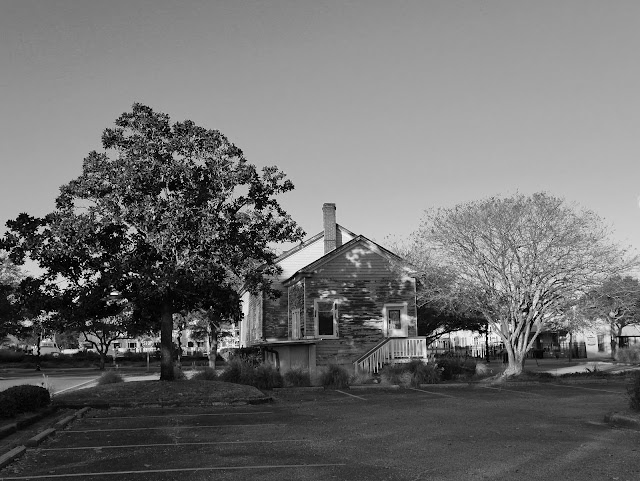 The fact of the matter for me is that out of season travel is frequently more rewarding than joining the larger summer crowds. Time seems like an ever more precious resource and the days of vacation flew by which made me think even harder about the luxury of not having to be anywhere. A longer stay in Pensacola would have been easy especially after my head cold had dissipated and I had caught up on my rest.There were places to go and things to see. A few nights of 45 degrees were followed by war summery days and pleasant warm nights. Winter comes in short bursts around here. 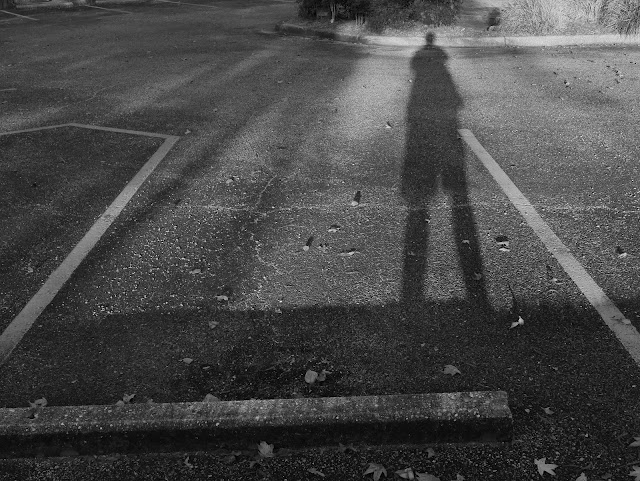 I was reading a story in the Washington Post which rather provocatively asked why some people have the urge to wander. My own plans to emigrate were roundly criticized when I was a youngster by family members whose idea of a journey was a morning drive in the car. Fortunately a half century later science comes to my rescue to tell me I must have a particular gene to blame for my anti-social nomad-ism. Its called DRD4-7R and it plays  some weird trick on dopamine levels which are to blame for every human aberration we are told. Including the desire to travel. 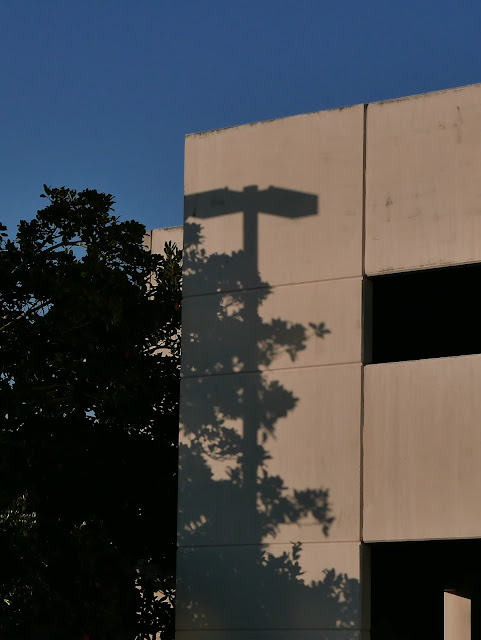 The gene supposedly increases one's tolerance for risk and seeks out a reward of constant stream of new sensation to satisfy a curiosity gone wild. Something like that. I don't actually think of myself particularly as a risk taker but I do have an active curiosity which pushes me to go further afield than anybody else in my family. Al three of my sisters have stayed close to home and only I have chosen not to, so I can only suppose the special gene is all mine. 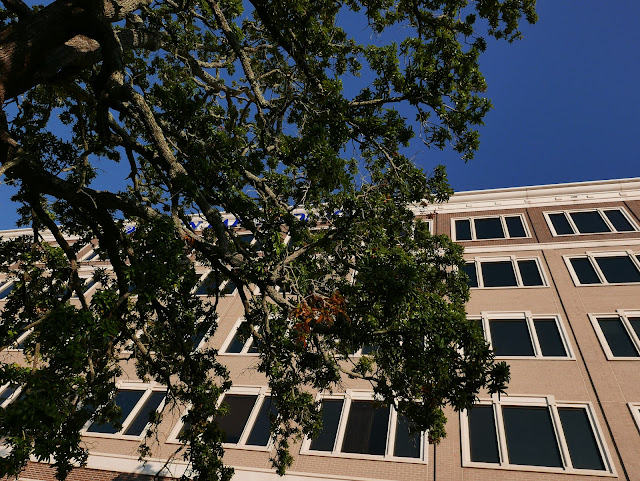 Staying put in the Keys for two decades has been pretty easy  as it's not a hard place to live once the decent job and a place to live fall into your lap. My excursions Up North are a reminder of how mild traffic problems on Highway One really are and even though costs are high, the ability to not drive much and not to need much in the way of clothes year round should help a little. It's different enough to feel sometimes like life in the Keys is itself a journey... 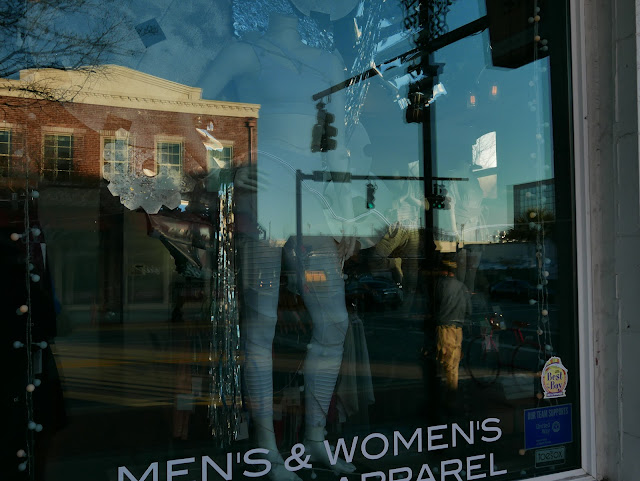 There is beauty everywhere and some people can't wait for winter snowfalls and skiing and all that Nordic toughness wrapped in puffy jackets and heavy duty boots. To live without seasons is a positive hardship and some days I too wouldn't mind some temperate mist and a rolling green valley or two wedged between mountains. 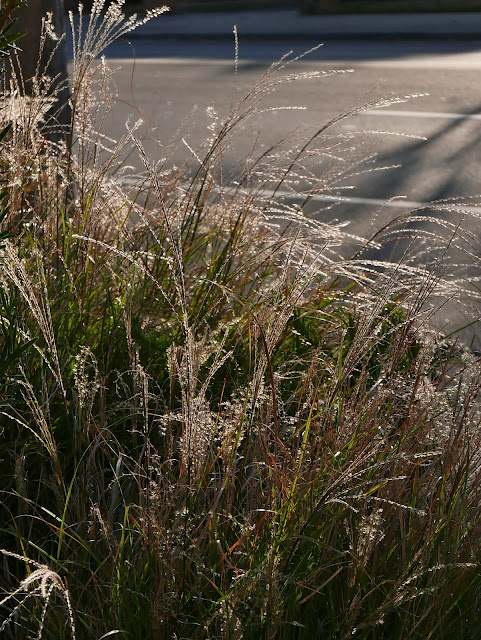 I wonder if when I find myself on those long sweeping endlessly straight highways wedged between Alaskan pine forests, if by then I will regret leaving the tropical fastness of the Lower Keys. 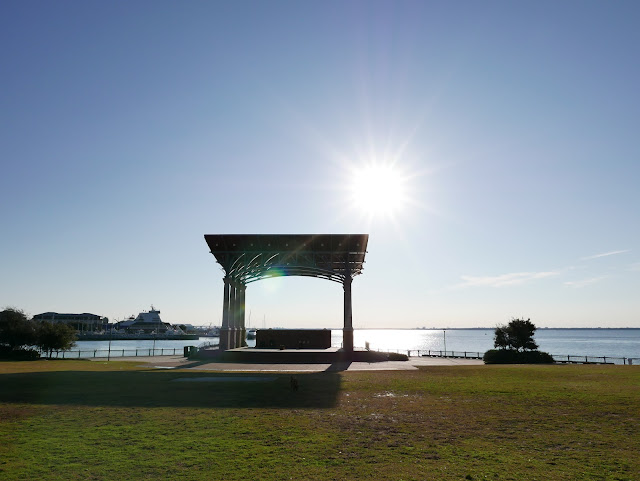 I wonder if the memory of salt water swimming from April to November will haunt me as I stand beside a glacial stream watching steam rise off the cold water into warmer sunlit air. Will the sight of a brown bear in the Pacific Northwest make me pine for the alligators of the southern mangroves? Will an early snowfall help me remember what it was like to live without a thought for changing seasons in distant plains? I expect not, and I trust I shall enjoy the change but I shall always enjoy revisiting my memories of life at the Southernmost City, a place that feels like home and to which I intend to return. A boat in a marina would be an affordable retirement home with the option to drive away from hurricanes! 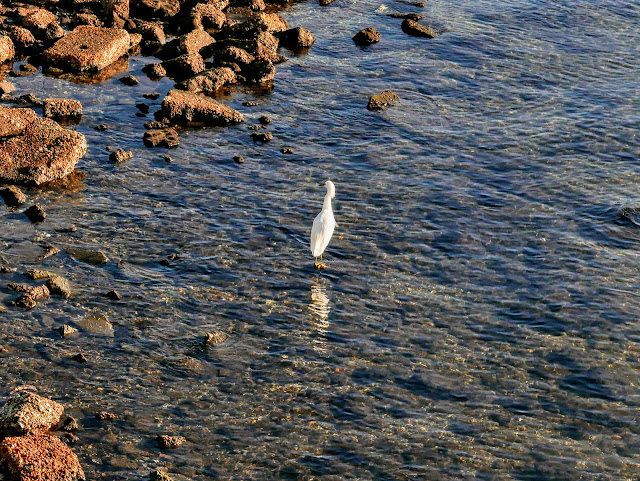 I shall pursue the changing colors of Fall leaves, I shall look for my breath on a cold still morning, I will seek out tropical heat from time to time even where English is not spoken. I might as well take advantage of being a polyglot. 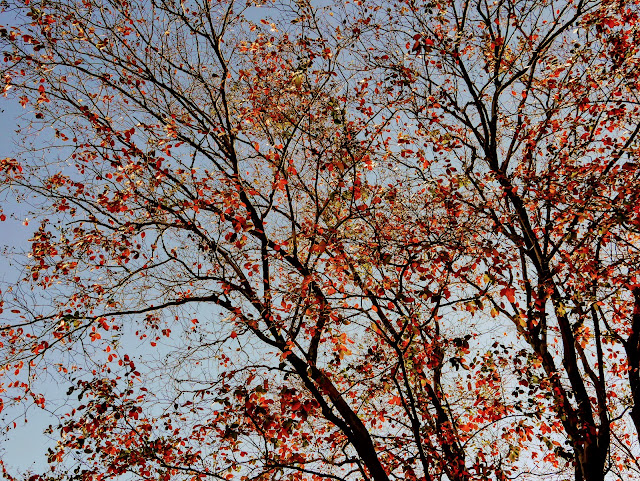 I shall try to follow Rusty's example and take things as they come and where he shows the sort of restraint we could all use, enjoying life despite an awful start I shall try to do the same whether we are in New Orleans or Namibia or  Puerto Navarino and  no matter how bad the day may be going. I shall probably fail but my dog will be there to remind me to enjoy the day and frost is a first world problem. 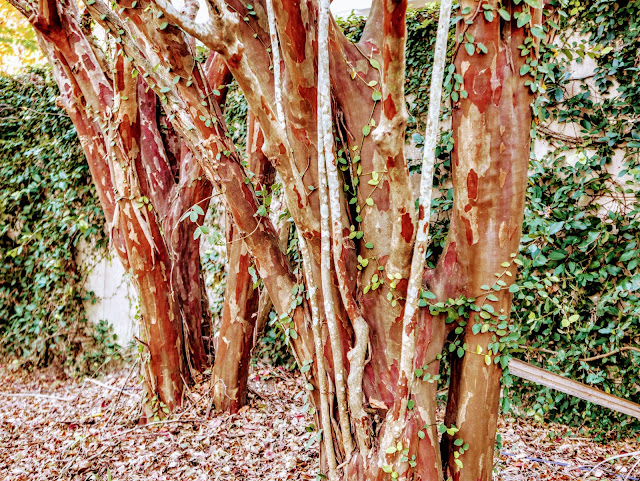 My answer to the hard questions of the road will be the same as Rusty's: try sunbathing till it passes. Good boy. 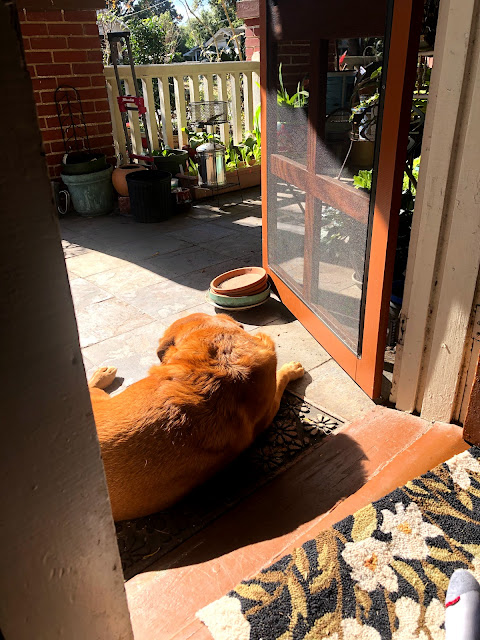