A Matter Of Time

"It's unusual," my wife said. "I don't recognize any faces here."
"Not surprising," I said. "I figure I'm the youngest person in the audience. By a long shot."
"It's not that I expect to know someone," she went on as we waited for the lights to go down. "But I almost always recognize a few faces in the audience." 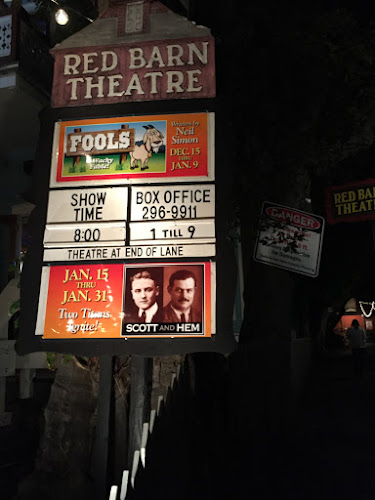 We have been living la vida loca lately with too much to do and not enough time. A common story, so we decided to treat the problem in an uncommon way. We decided to to not only make time to do stuff, but that we would actually follow through - that's the uncommon part. At least so far... 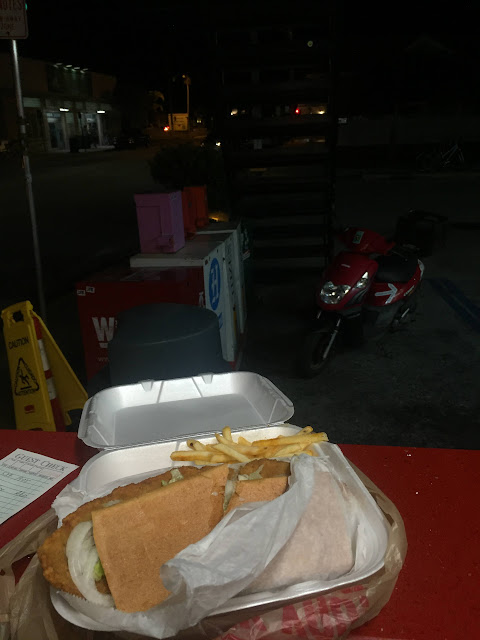 Of course a few business details had to be wrapped up at the house before we got away to drive to the Big City, so time was pushing us into a corner...Cheyenne doesn't leave the house much these days, she sleeps and eats and staggers around on very unsteady legs, a really old dog suddenly who fills me with sadness and nostalgia (not that I ever let her know). We wished her a cheery good night and launched ourselves into the cool of night, not too coll, but quite dark and debated dinner. Our initial plan of seafood at Alonzo's yielded to the reality of time so I suggested Sandy's for a fried fish sandwich which we shared so not only was it quick but it was also cheap. We sat at the counter, the view rather prosaically that of White Street after dark and drank coffee and shared fries. It was companionable in a student-era kind of way. A group of real youngsters stopped by and started talking about how authentic the food was and I was reminded that this is winter and visitors are always looking for the "authentic Key West." They looked like surfers who lost their way to Laguna Niguel. I privately wished them luck in their search for truth. 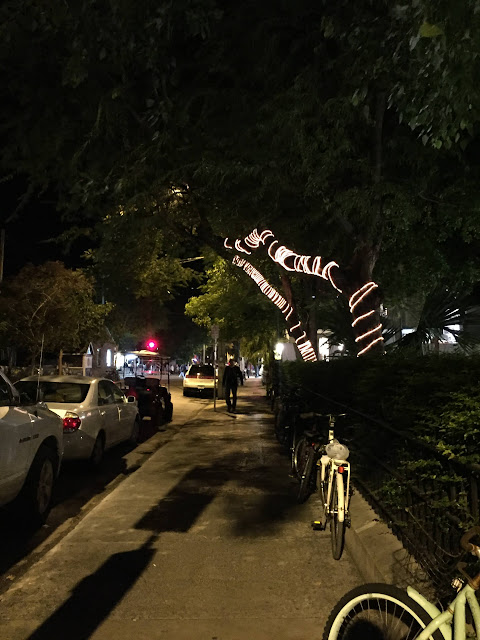 Downtown we parked and I fed the meter five bucks for two hours which seems like a deal compared to the cost of a parking ticket and I didn't feel like rushing across town from a backdoor free parking spot so I paid to park and we strolled. It was a lovely night, not at all cold, velvety dark and perfect for two people to amble. The windows were wide open at the Bull though we had no time of course to pause for a beer. We had a play to watch. 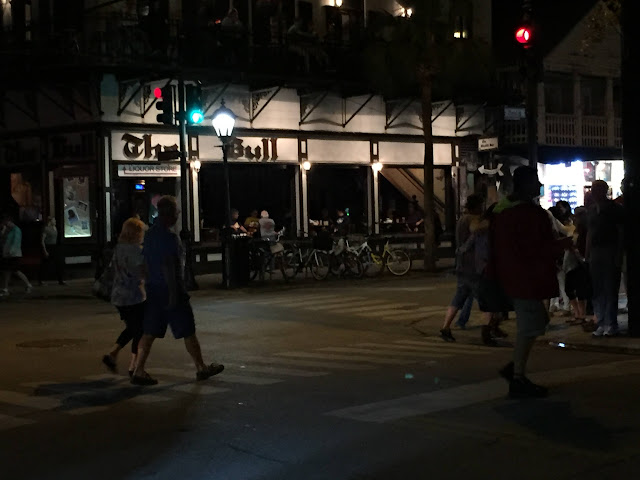 They offer alcohol at the Red Barn but we had to stay awake and drive home besides we were full of Sandy's cafe con leche (so authentic!). The play was a Neil Simon farce and I found a synopsis on my phone...so modern...which I studied as we squished into our seats in the middle of the row in a  sold out house. Wikipedia to the rescue! 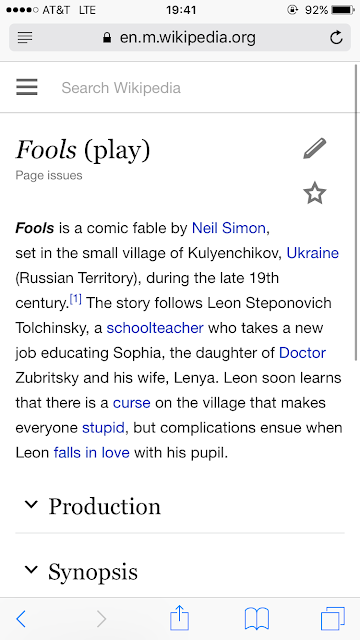 We had determined we wanted to do something other than work just three days prior which left me a bit short on actual knowledge about what we had come to see...The set was a Ukrainian village gorgeously rendered by Rick Worth in this picture from the Red Barn website:

I was struck by the fact that the older actors on stage, Key West stalwarts had the smaller roles most of them but they were so proficient in this and worked so well as a team as the village idiots they outshone the raw young talent of the love struck leads. But hey we laughed and I enjoyed the overtones of a world gone mad with stupidity...until I noticed the age of the crowd. 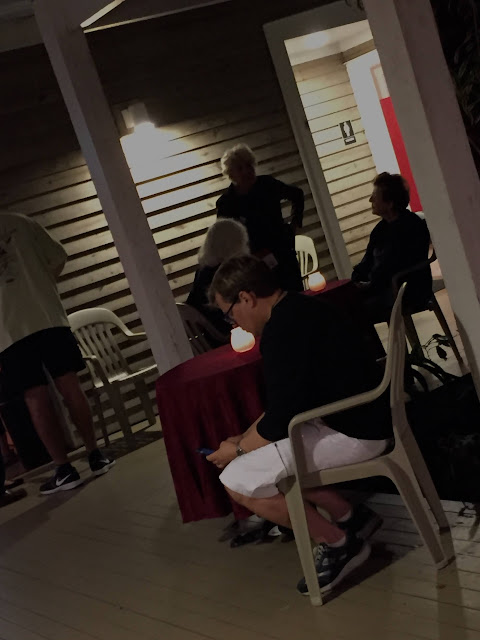 "We just love it here," I overhead someone saying, that sort of comment that sounds somehow patronizing coming from people who live here but a few months of the year. You only get the good and the bad, the ugly and the sublime through the grit of living here all the time. I wish people who think they "love it here" would give themselves the full true measure of commitment. I have heard it said that the reason that residents of San Francisco hate it when visitors call the City (as its known to locals) "Frisco" is because they fell that the nickname, never deployed by residents, expresses excessive unwarranted intimacy with a city too beloved by outsiders. It's an odd sentiment, bewildering perhaps, but I find it applies to my feelings about Key West. 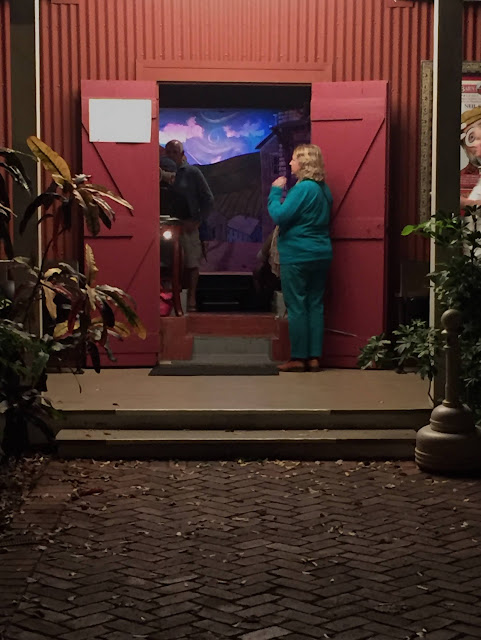 I looked around at the sea of old people and I'm sure the theater is glad to see paying bottoms in seats but I had flashbacks to my past living in God's Waiting Room (St Petersburg) when it was a  much less dynamic city than it tires to be today. I got the feeling that Key West is becoming what St Pete used to be. It unsettled me to feel like that, and I expressed the thought to my wife as we ambled across the courtyard back to Duval Street, after the play. 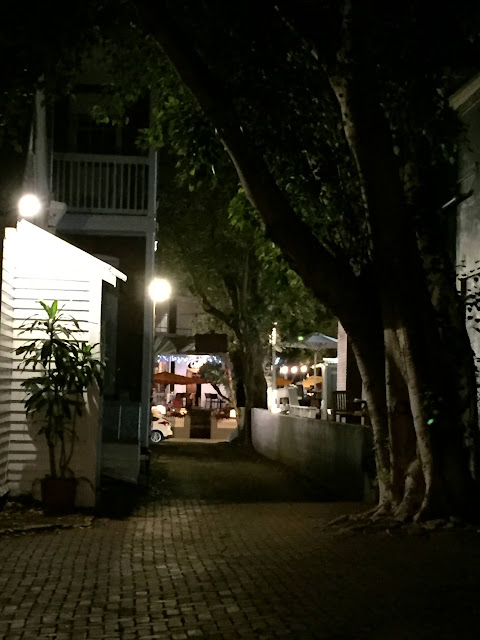 I think the earth shifted slightly in 2008 and the economic crisis knocked places like Key West out of reach of people who thought they could afford the occasional high cost fling, people who come to town, drink for a week and go home and adjust their second mortgage on their home they thought of as a piggy bank. Nowadays only the elderly wealthy can afford winters in Key West it seems and Duval was relatively quiet as we walked back to the car on a perfect January night. Food for thought. Meanwhile we had other food thoughts on our minds. 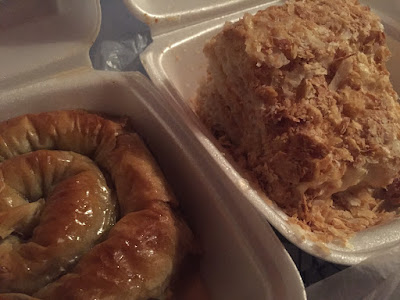 We stopped for dessert to go from Kennedy Cafe, the Uzbek restaurant recently remodeled and looking lovely. We had dessert wine at home to go with the Napoleon and the circular baklava and Cheyenne was waiting for us, now more than ever cherished for the simple fact of still being there to greet us, waking suddenly from sleep, surprised and quite possibly pleased to be awoken. 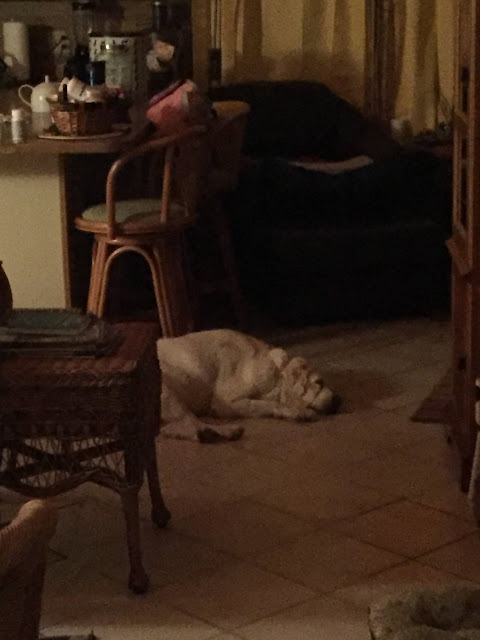 Time passes things change, we come and we go and permanence is made transitory. I hope young people rediscover Key West, and find it an affordable base from which to be creative and thoughtful and high spirited, and a good deal less like the retirement center it feels like it is slipping into.