I knew I should never have opened my mouth at the entrance to Fort Zachary Taylor on my lunch break. When I inquired mildly whether they had seen more or less visitors with all the talk of park closures in the news I got a short lecture about state versus national and the bitter comment that the state can't print it's own money. 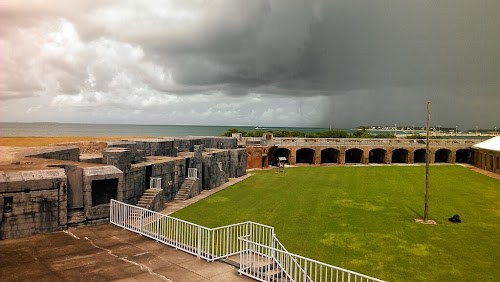 Fort Zachary Taylor State Park is the southernmost in the state system and it's wedged on the southwest corner of Key West, tucked away behind the Navy Annex. It used to be surrounded by Navy land so the approach road to the park gates and the drive inside the gates to the parking lot tends to appear mysteriously long and winding for no apparent reason. Visitors on foot have a bit of a hike. 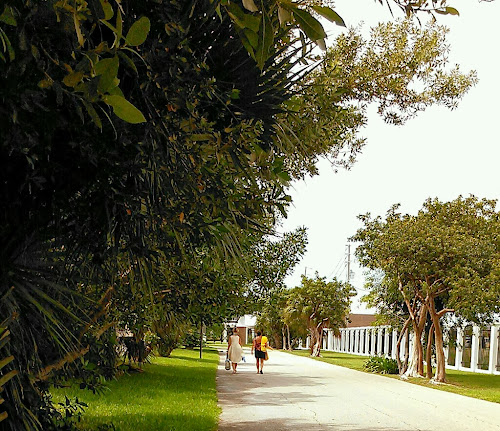 According to the information at the trance to the Fort there is a ranger tour every day at noon starting at the flagpole. I got there late so I contented myself with a self guided walk and some light photography. The fort is very easy to enjoy. 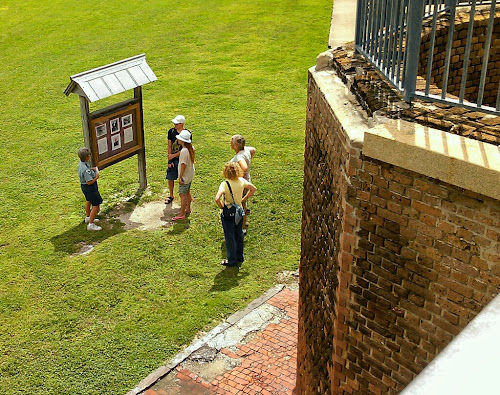 The fort was built starting in 1845 and named for the recently deceased President in 1850. It was designed to protect the approaches to Key West harbor, which became a critical Union blockade base and trade route in the Civil War. The garrison commander Artillery Captain John Brannan secured the fort and therefore the city for the Union by secretly marching from his barracks on White Street to the fort in the early hours and refusing to hand it over to confederate sympathizers in the city. 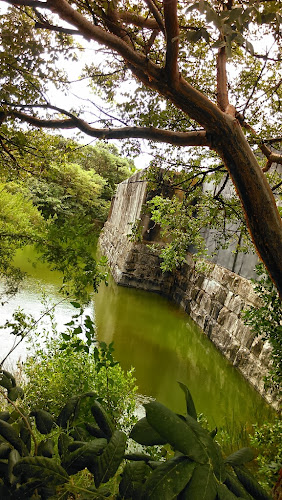 Back then the fort was surrounded by water and was accessible across a long wooden bridge that connected it to land. As the harbor was dredged the dirt was thrown up,around the fort at the entrance and the landmass grew around the brick building. Today it has a moat separating the fort from the woods and beaches that surround it. 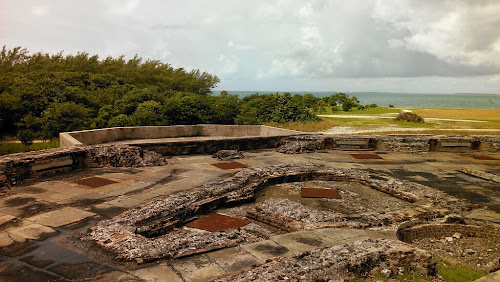 It costs one person on or in one vehicle four and a half dollars for a day pass to the park and I spent more than half an hour in the fort alone before I had to run back to my scooter to get back to work. There is lots to see and views to enjoy and much to meditate on. 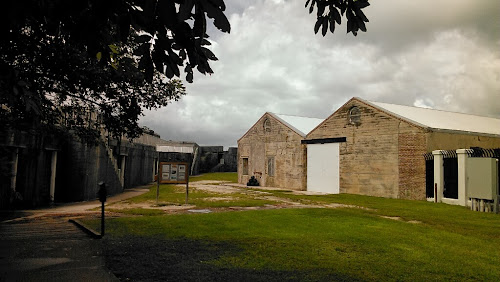 I like most people enjoy our parks both national and state and all the paraphernalia of monuments and wildernesses scattered round the country and at this time of Federal shut down the closure of the parks seems like the meanest and most visible side effect of the drive to deprive people of affordable health care. 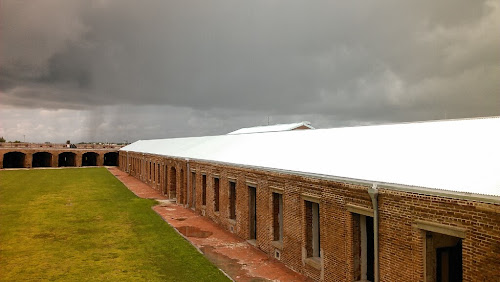 Fort Jefferson in the Dry Tortugas is closed, putting quite a few people and tours out of work, and perhaps that closure makes this place all the more valuable. Quite aside from the fact that the architecture is similar. 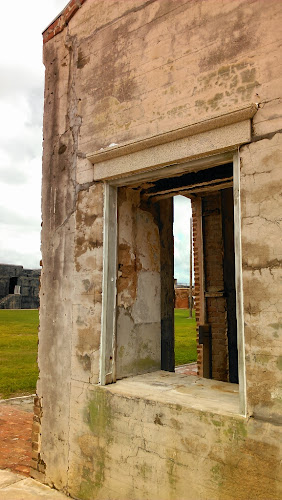 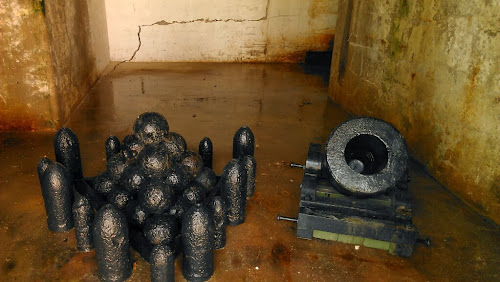 Fort Zachary has its share of guns and military stuff. Originally, when the fort was finished in 1866 it was three floors tall but in 1898 they knocked off the top two to make the fort a less obvious target for modern artillery. 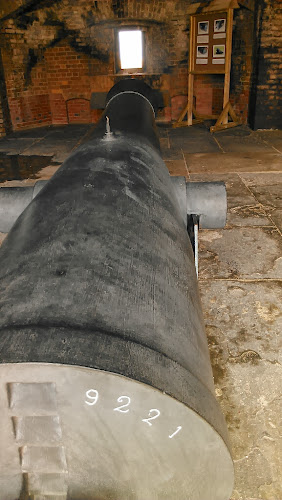 In fact the fort never was defended in any meaningful way against an attacker and nowadays it hosts an annual civil war reenactment as a tribute to the past, as well as a haunted fort theme for Halloween. Friends of Fort Taylor 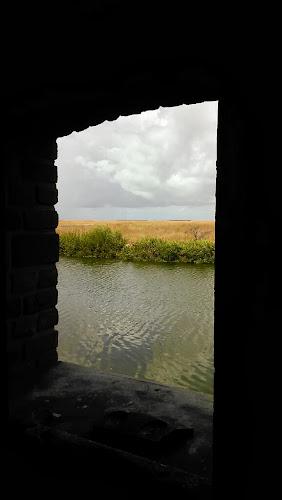 It's a great place to go for a walk and think profound thoughts if you are so moved. How they built these arches using bricks is conundrum enough. 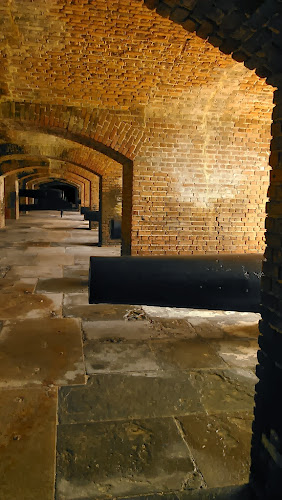 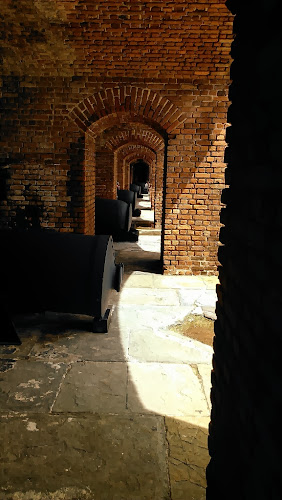 The US President for whom the fort is named was, quite frankly, an odd fish. He was born in 1874 and he fought in the War of 1812, Indian wars and most famously in the Mexican-American war and he was known as "Old Rough And Ready." His ascent to the presidency was pretty odd too. He didn't find out he was nominated for quite a while as he refused to receive the notification as it was a postage-due letter and he didn't want to pay for it. Also because he had moved around so much as a soldier he had no official place of residence and he first voted at age 62. Rumors that he was poisoned in office were finally dispelled in 1991when his body was exhumed and inspected. It's hard to imagine Zachary Taylor getting elected to anything in the television age. So much the worse are we for it, as the Federal shut down demonstrates. 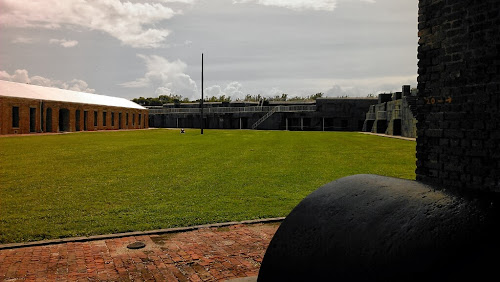 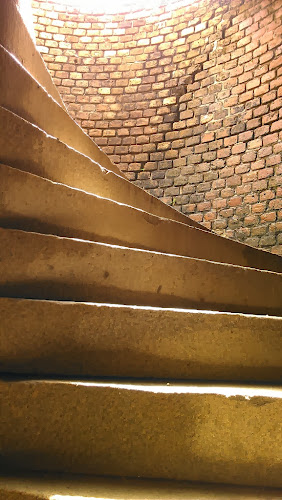 ...across the Key West harbor, where the deleting study was to have taken place. 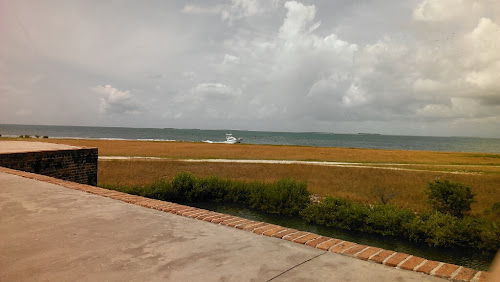 And even though the channel won't be widened any time soon there are still plenty of cruise ships dominating the skyline: 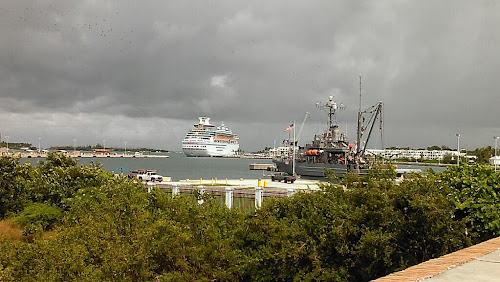 I saw rain clouds moving off shore after they doused Key West with one more summer thunderstorm yesterday, and in front of the clouds you may be able to see a few black specks that were a kettle of turkey cultures hovering in the updrafts. 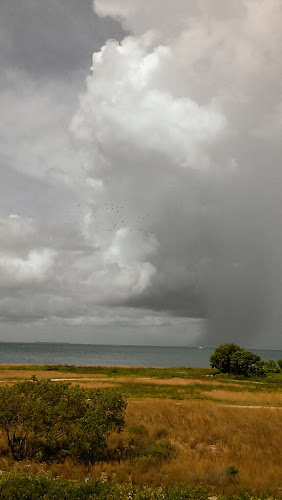 And I enjoyed myself so much I had no time to go to the beach and take a few pictures of Key West's best swimming beach. Key West Diary: Fort Zachary Beach 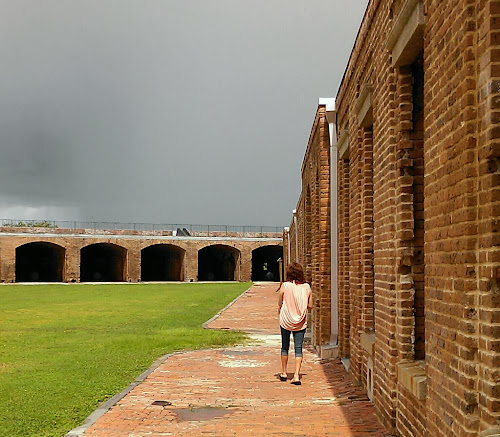 Time to get on the Vespa and buzz across town back to work. Down the long winding road to the entrance... 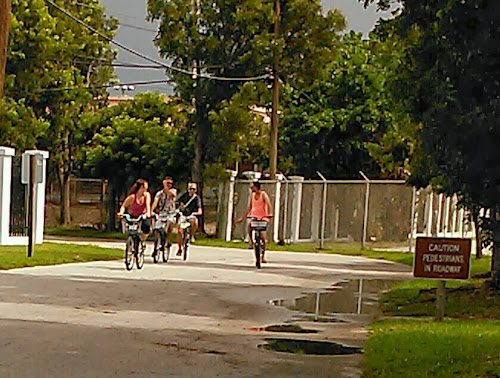 Posted with Blogsy
Posted by Conchscooter at 12:02 AM No comments: