Come over to Flagler Beach dogs are welcome and you can park the van on the beach. 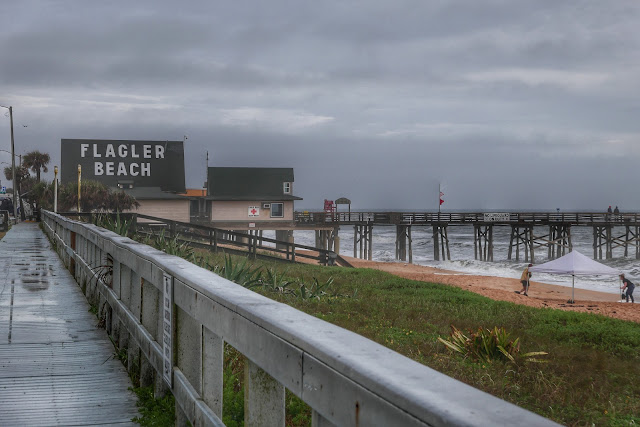 I don't know Kelly but that was some good advice. I have discovered I like Flagler beach. Naturally when we were there on Valentine's Day it was overcast with intermittent drizzle and rain and strong winds. Not really beach weather unless you were a surfer looking for excitement in muddy brown waters stirred up by strong winds. 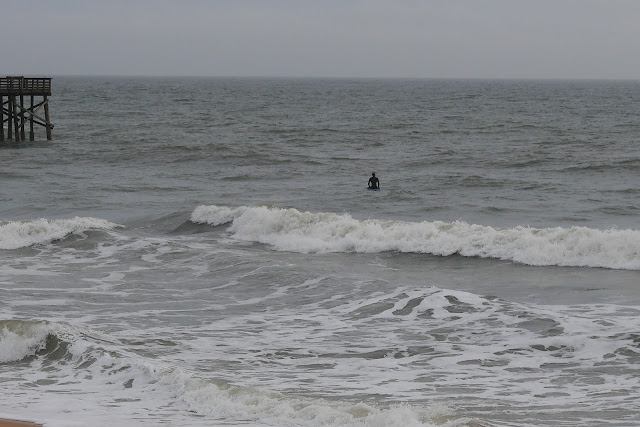 I took an umbrella but forgot my vest so I was exhibiting the sort of toughness you expect from a Keys resident where 70 degrees is as cold as you want. My wife chose to record my stupidity for posterity. 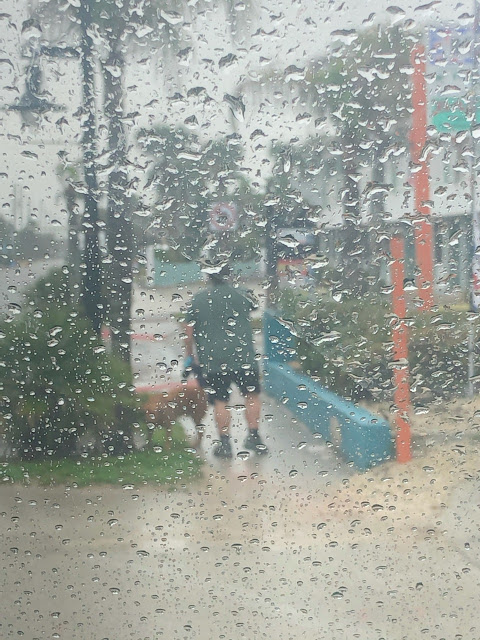 It takes courage of a particular sort to live in a house painted Pepto Bismol pink but this town has the rather sturdy attribute of encouraging non conformity. 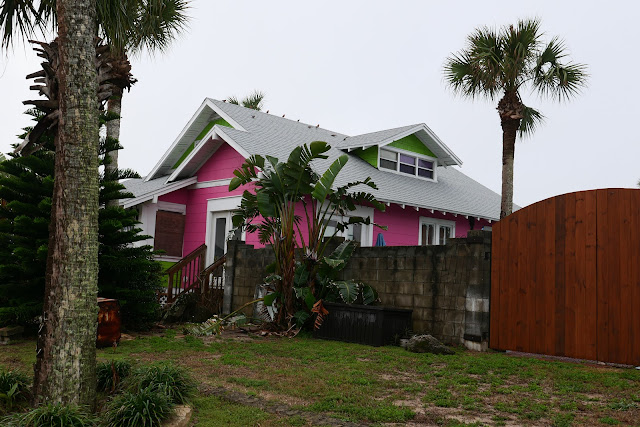 Beach towns on the east coast of Florida have their own character and they only faintly resemble the beach communities on the west coast. Florida's Atlantic coast is straight and relatively featureless though the sand beaches stretch the entire length they are pounded by actual ocean waves driven by southeast winds that land unobstructed along the coast. Florida's Gulf coast is much gentler, with heavy summer rains and profound humidity along a coastline broken up by sandbars and islands and natural inlets. Take your pick. 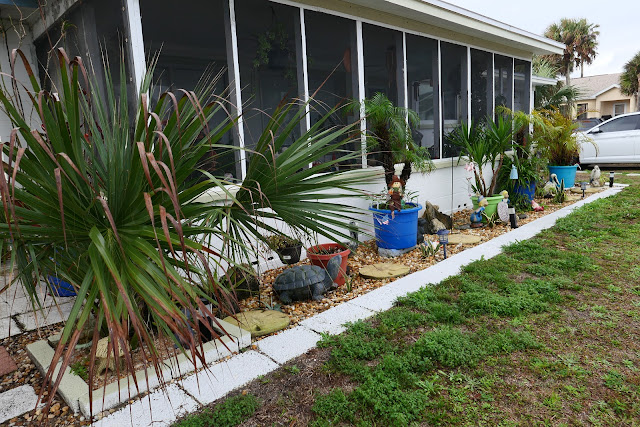 Any town with a law office decorated in the Jimmy Buffett style can't be all bad, can it? 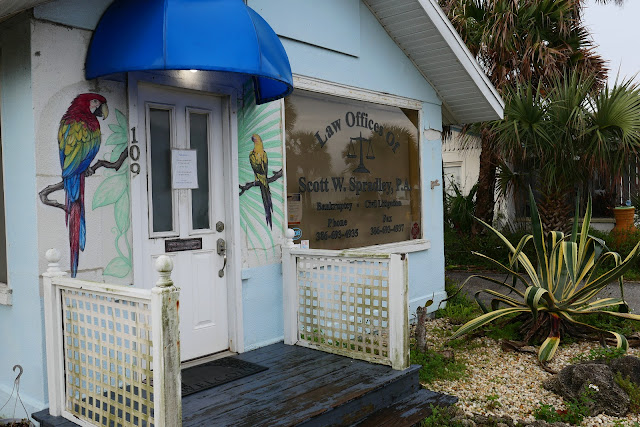 "Private property" is a sign common to the streets of Key West where tourists have trouble learning boundaries, mostly because residents don't make it easy except for the few smart ones who defend themselves in print. 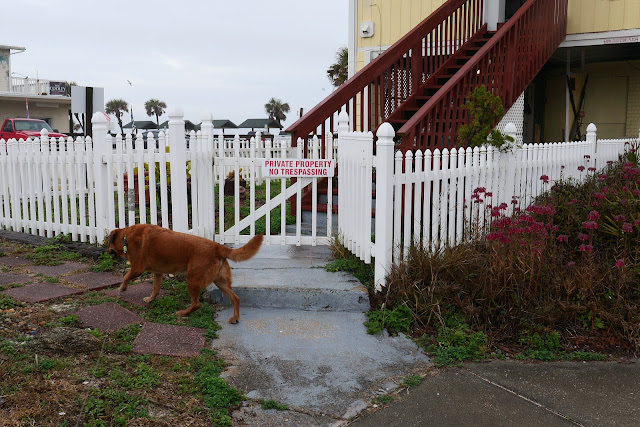 I have no idea what turtles have to do with ice cream but I suddenly wanted one (an ice cream not a turtle) so I suppose the vehicle was doing its job. 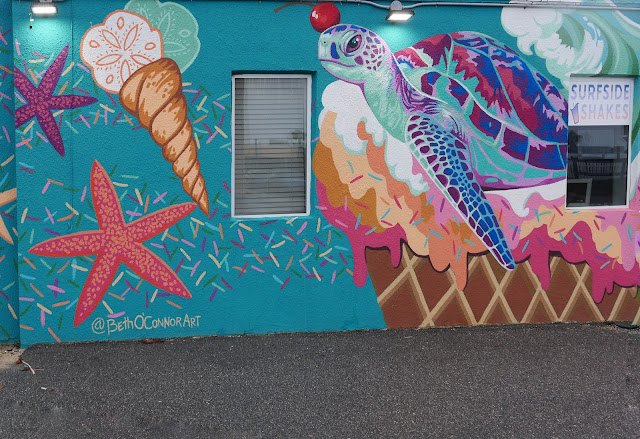 Burger Bob indefatigably holding up a double while Rusty the indefatigable ploughed on by pressed forward by a  strong humid southerly breeze. 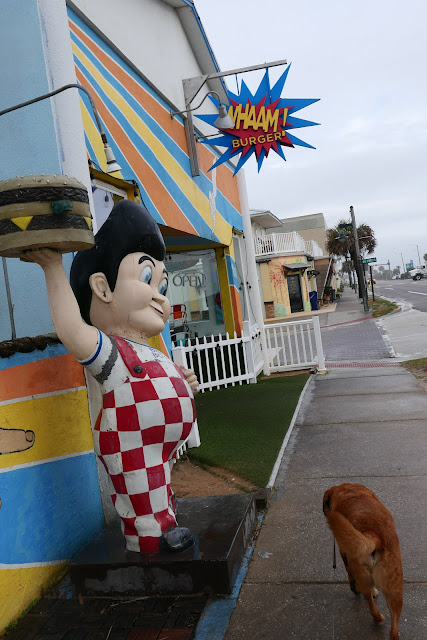 Flagler beach has a central attraction in the pier that juts out into the Atlantic Ocean. The beach apparently is good for shell collectors but as I am a nomad and not much given to collecting I can only judge by the actions of others. They seemed to be collecting stuff from the sand, either that or they were doing some form of walking yoga unknown to me. 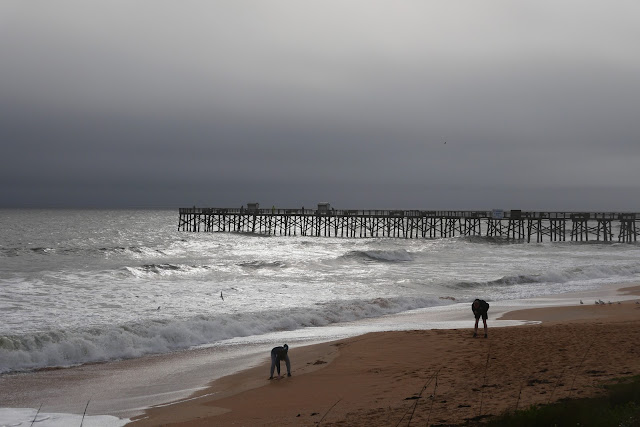 Check out these ridiculously simple and effective garbage cans placed the sand dune "overwalks" which are foot bridges designed to get people on the beach without disturbing the dunes and sea oats. 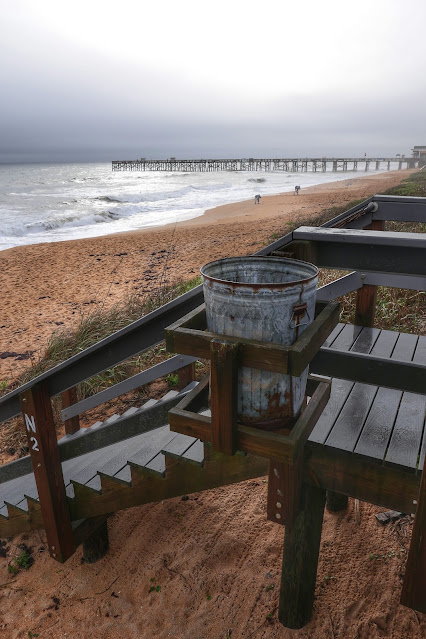 The unusually broad public beach access and lack of waterfront development is attributable to one Betty Steflik who spent the last 25 years of a long life bound and determined to preserve what she saw and liked in this town. She served as a city commissioner and according to her family and friends she was someone who never took no for an answer.  That Flagler Beach is so eccentric is directly attributable to her activism, which ended when she died in 2004. 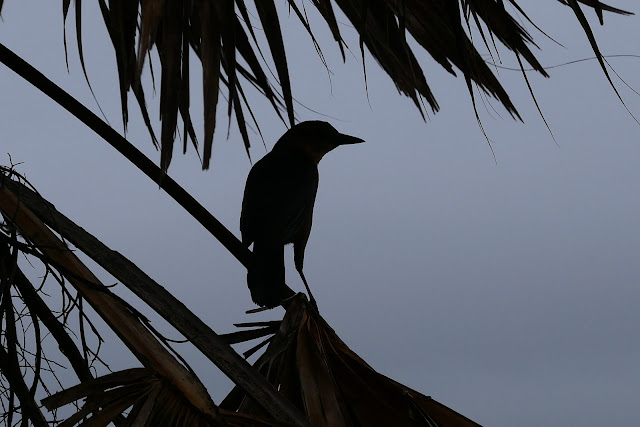 Indeed dogs are allowed on the beach at each end of town, prohibited only between 10th Avenues North and South. Very civilized except that it was so windy and wet and gross we limited ourselves to wandering city surface streets. it is the law that when I am off and most especially when I am being hip in a van it must rain copiously and endlessly. Naturally we left our van life ponchos safely locked up in the van. So we took refuge in the lobby of the pier located right there with all convenient conveniences. Use CAUTION though as death and dismemberment lurks everywhere, as do lawsuits: 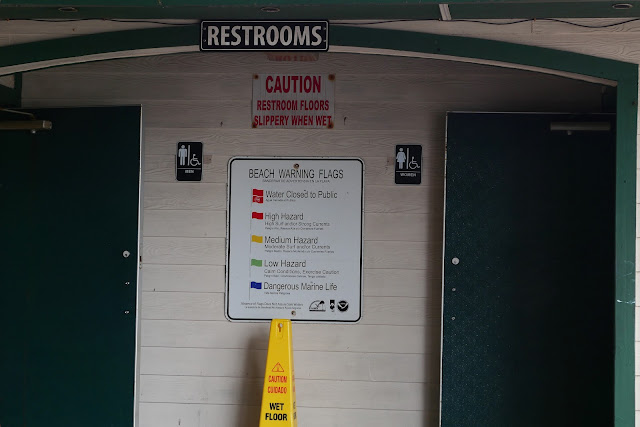 Rusty watched the squall blow through and we did likewise. This town has public benches and trashcans as well as handy toilets.  The sign said "If you are lucky enough to live close to Flagler Beach then you are lucky enough." Some truth in that. If you have a buck fifty you can go for a walk on the pier (No Dogs). You have to pay more to walk on the pier and kill fish but the fees are modest and the facilities are clean and organized. 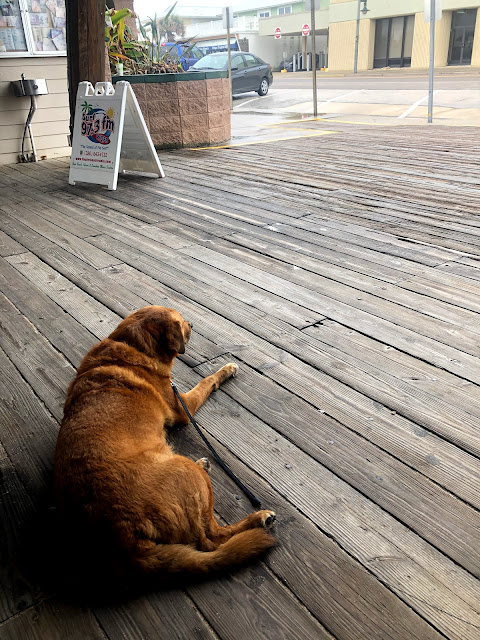 And in case you thought Flagler Beach were perfect check out this Stalinist cube across from the pier. This is what Flagler Beach might have been had Betty Steflik not spent the last 25 years of her life objecting to. 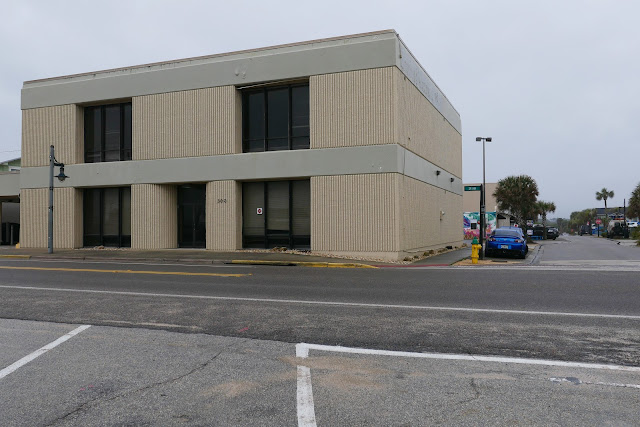 Pay the man a buck fifty and the pier is yours, all day if you want. 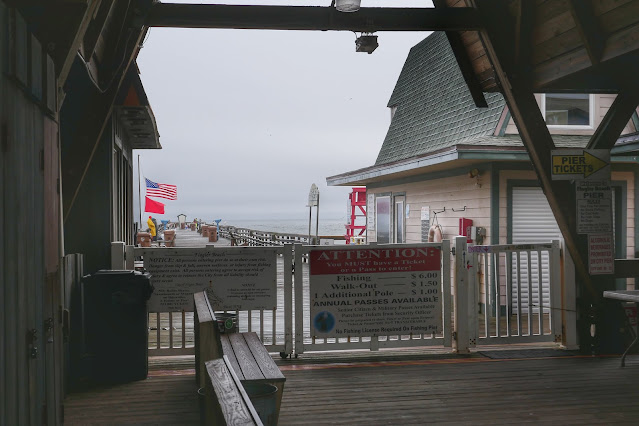 There were quite a lot of vans parked around town. I tried to hide mine behind a palm and failed. I could have parked at the beach but it was extra windy and rainy there, just my luck. We walked. 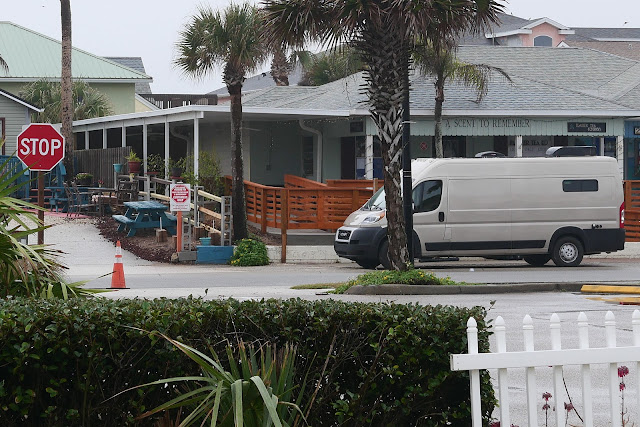 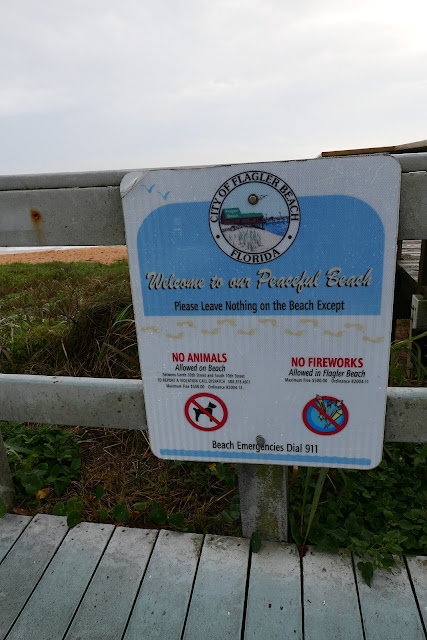 Notice the total absence of waterfront development on the ocean side and the absence of condo high rises on the inland side. 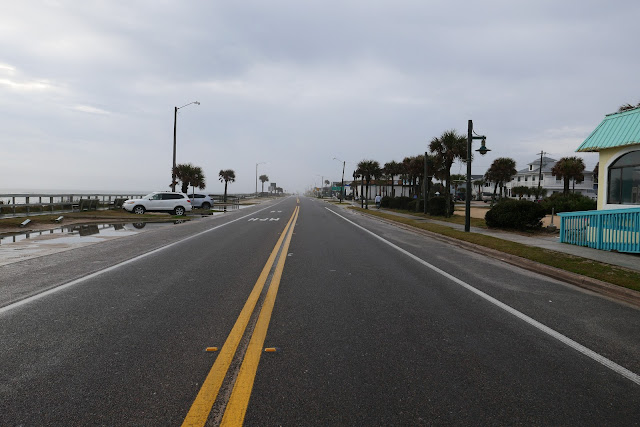 Not your average outdoor beach chair. 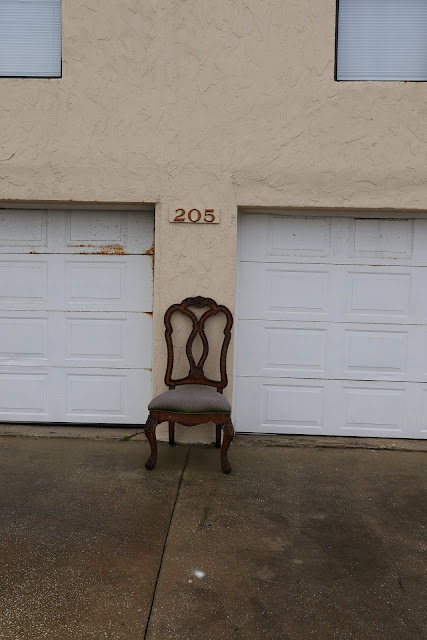 There shall be festivities Valentine's Day no matter what! 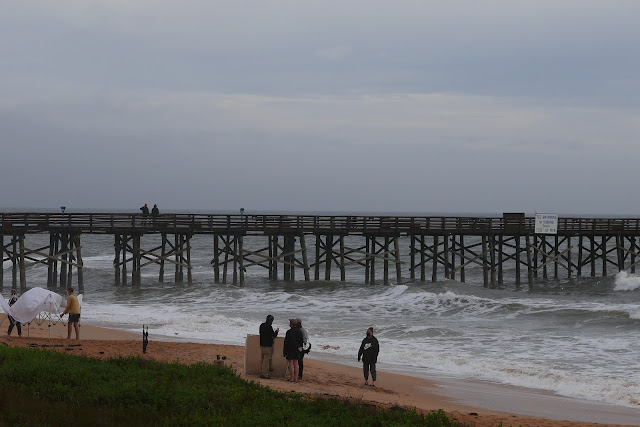 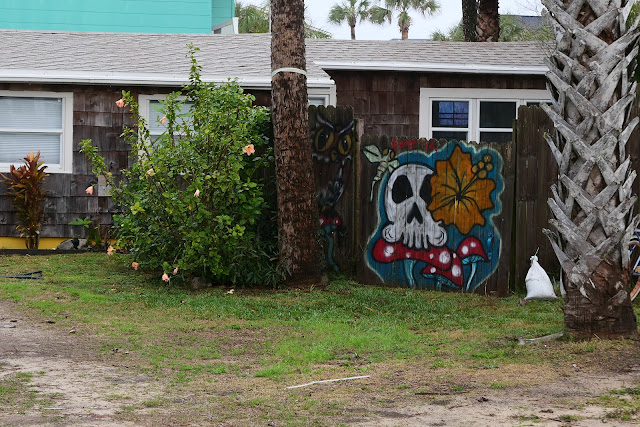 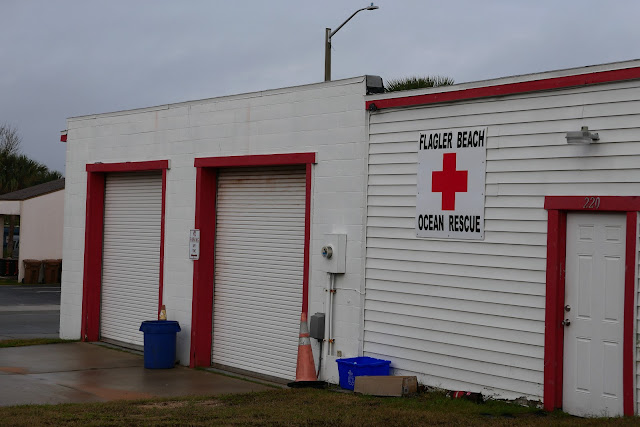 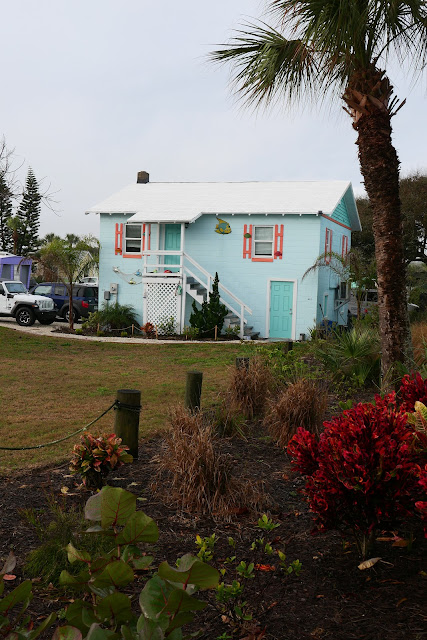 A pretty little town.
Posted by Conchscooter at 12:00 AM No comments: