Rolling down Highway One into Key West for my Physical Therapy last Wednesday the car told me tire pressure was low and the back end started squirming. I knew what that meant so I pulled over just before Key Haven. 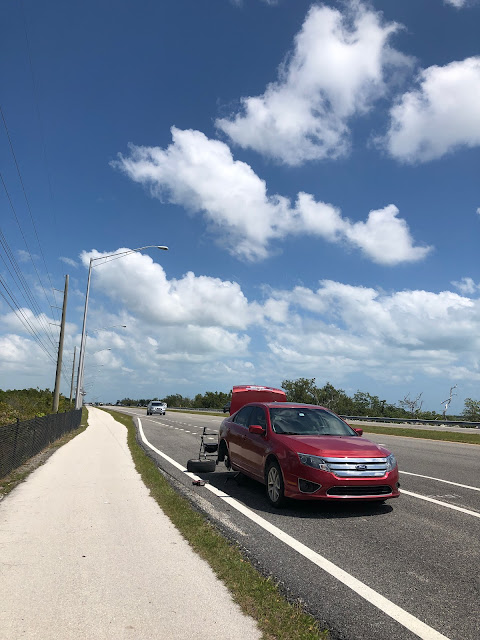 I got my walker out of the trunk and while Rusty snored in the air conditioning on the back seat I managed to assemble my tools and got on the floor to do the job. Which was when the tow truck showed up and Vic saved my bacon. 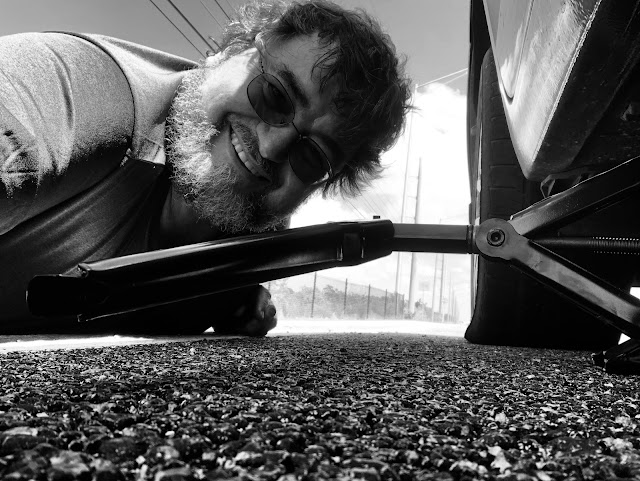 I cannot lie; it was great when he  got to work and did the heavy lifting but even so I think I could have finished the job, ever so slowly, had I been alone. 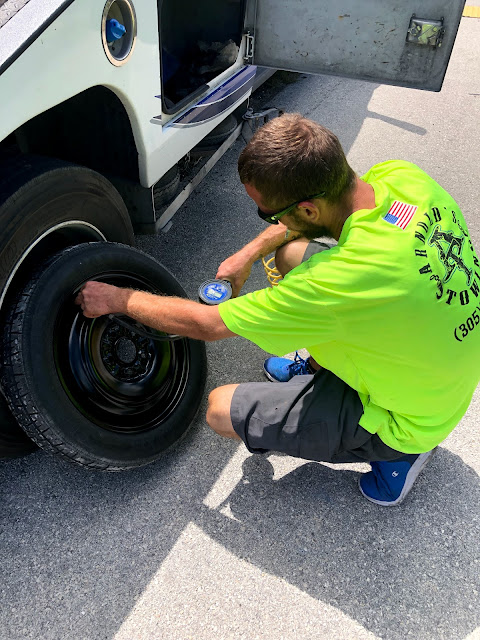 Anyway the flat revealed a need for two new rear tires so my wife immediately checked and they had them in stock in Marathon at her favorite shop and I was ready to go in Thursday morning first thing. So don't tell me cell phones are useless because everything was arranged before Vic had me ready to go. Technology still has the capacity to amaze me! 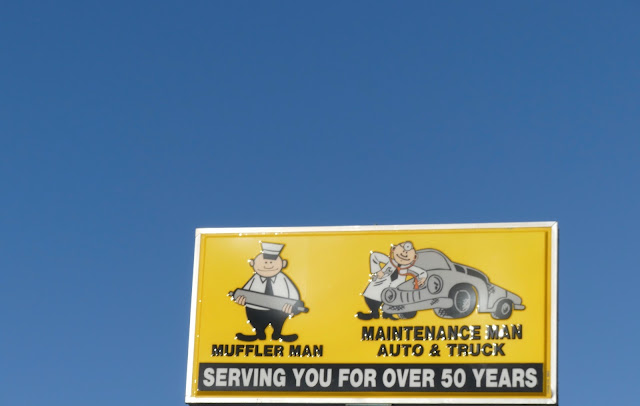 Next day I was in the shop by seven thirty for $250 worth of tires. Two hours later Rusty and I were off back home 40 minutes away. 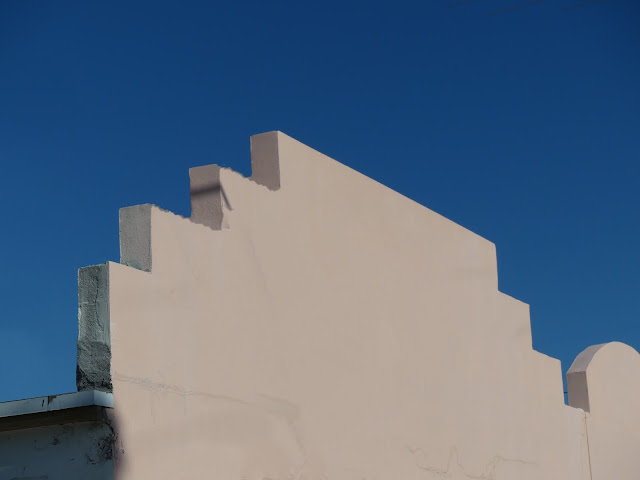 Naturally I took the little tyke for a walk and explored some of the side streets of Marathon the branch out from the four lane highway through town. 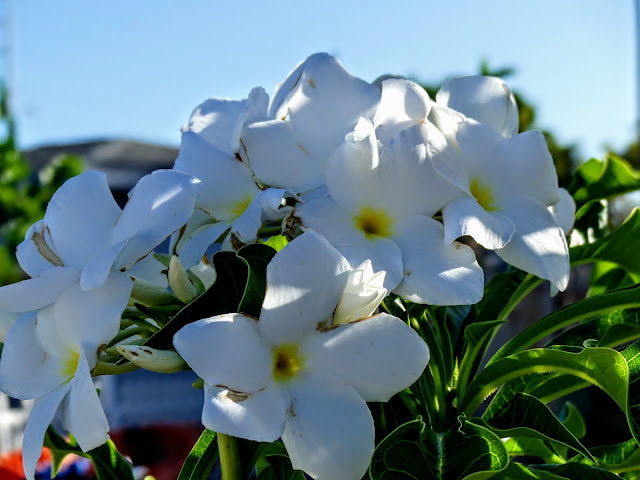 It was sunny cold and windy, perfect conditions to stump along behind my dog looking for things that might catch my camera's eye. 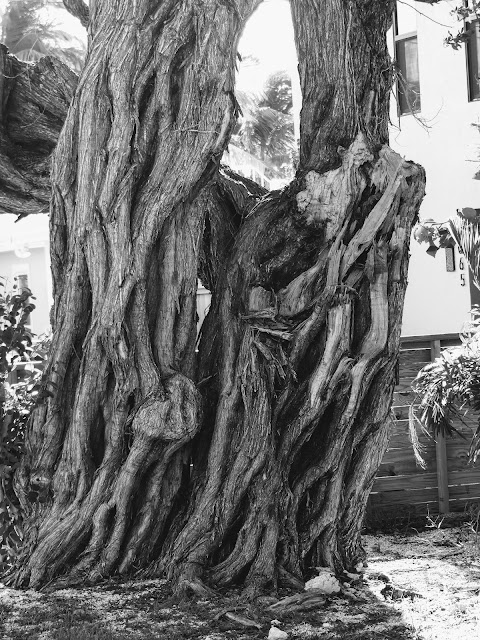 I find it very relaxing to loo around and when I get involved with the camera Rusty, such a good boy sits and waits patiently at the end of his leash. 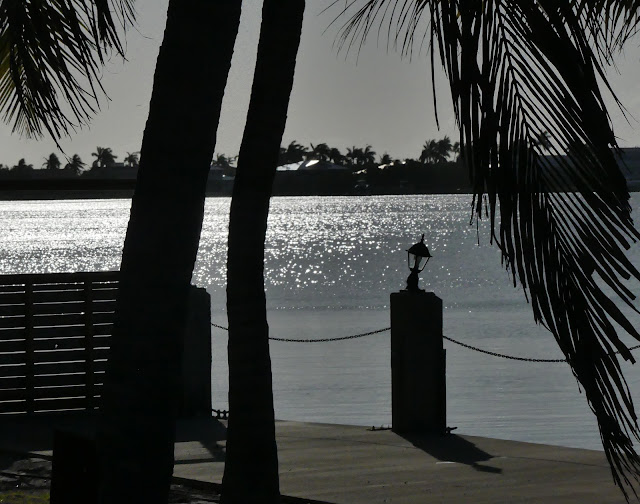 It's a very companionable way to walk. 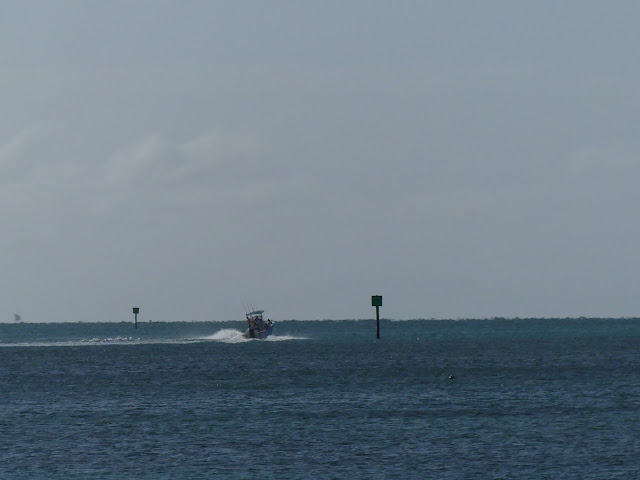 This house looked lie it was still hurricane  wrecked, frozen in time, and it gave me pause thinking back to the wreckage caused by Hurricane Irma in 2017. 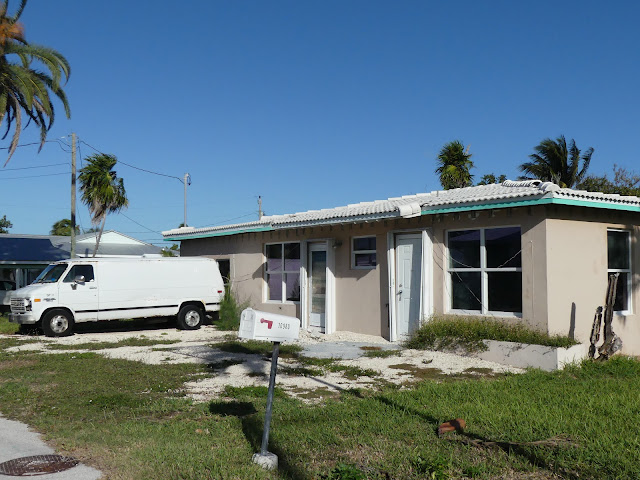 Mostly I enjoyed the deep blue sky, the contrast of the greenery and the flowers. 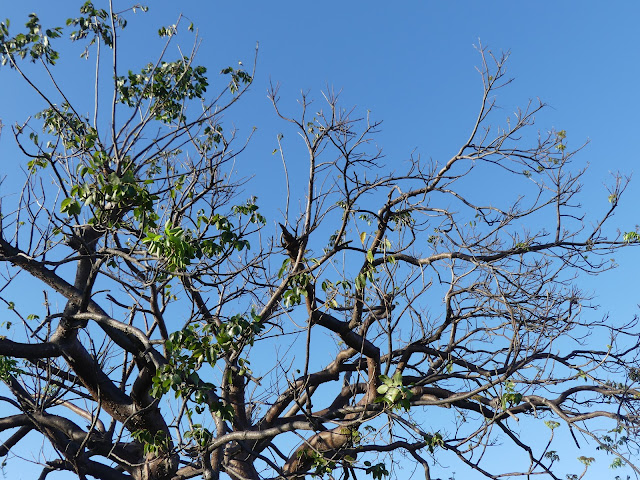 Rusty did the same. 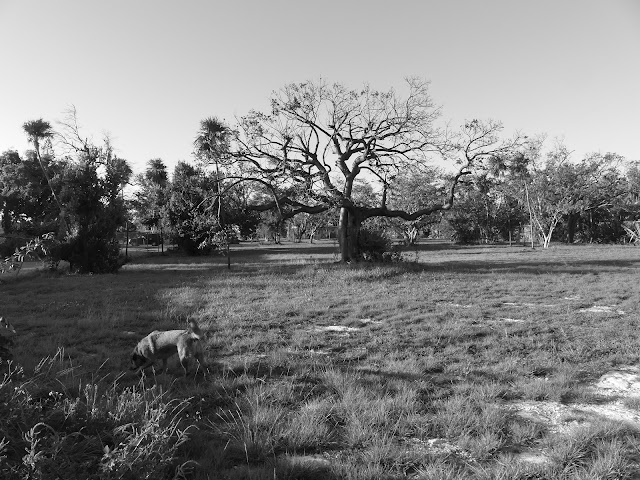 I found a warehouse with a loading dock just the right height for me to sit and rest my weary legs: 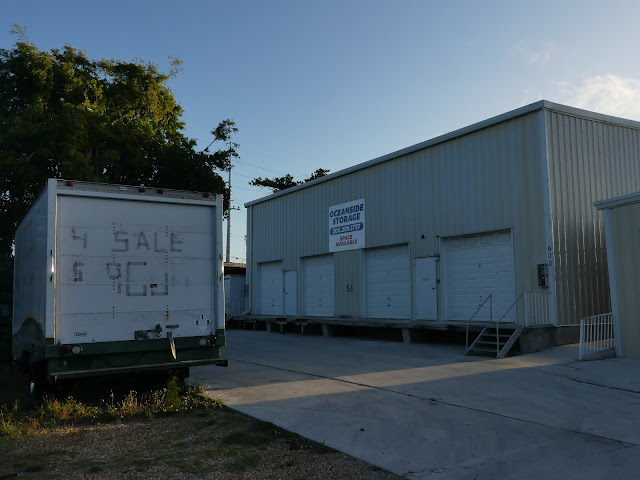 Rusty hopped up nimbly alongside me and seemed reluctant to leave. 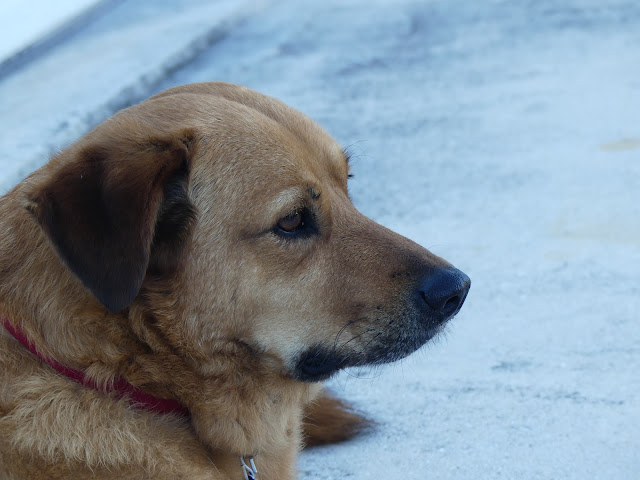 We sat and watched nothing in particular on the quiet side street. 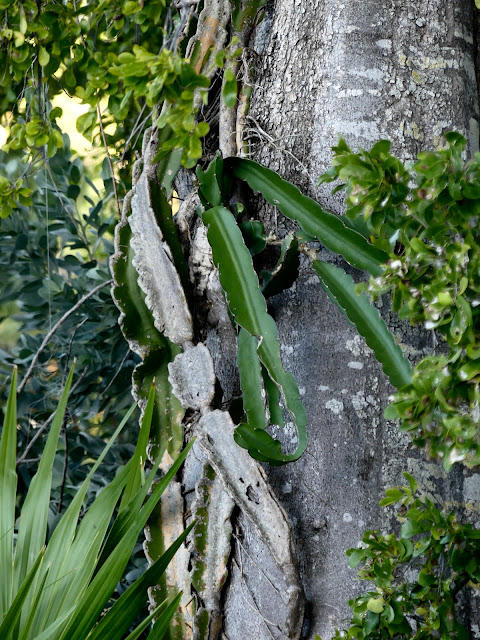 He wa sin no hurry. I had a novel in my phone in my pocket so I was set. 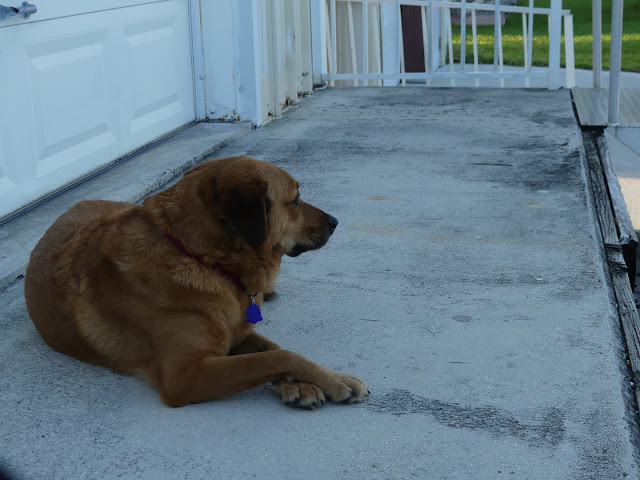 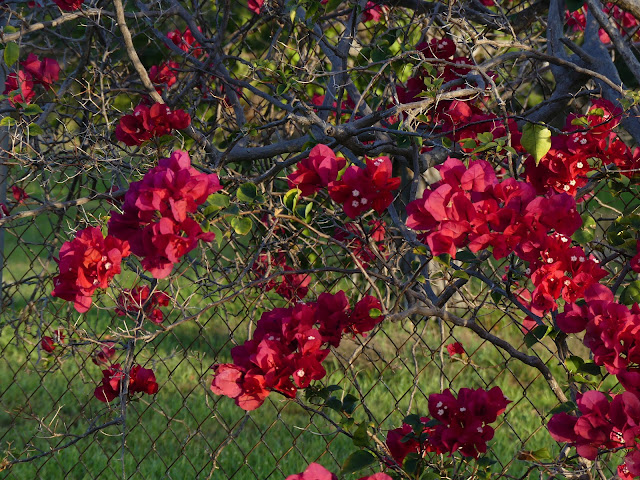 The early morning sunlight gave the little side street a park-like air. 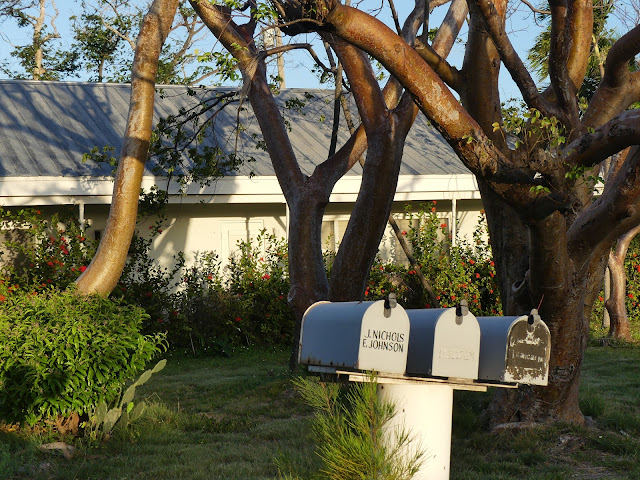 The Straits of Florida shimmering in the distance at the end of the street. 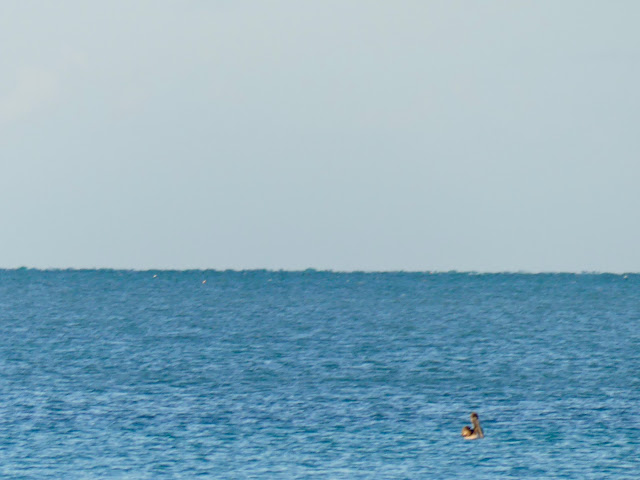 And eventually the car was ready. I was ready too, to get out of the cold north wind and warm up on my home with my faithful sidekick stretched out on the back seat. 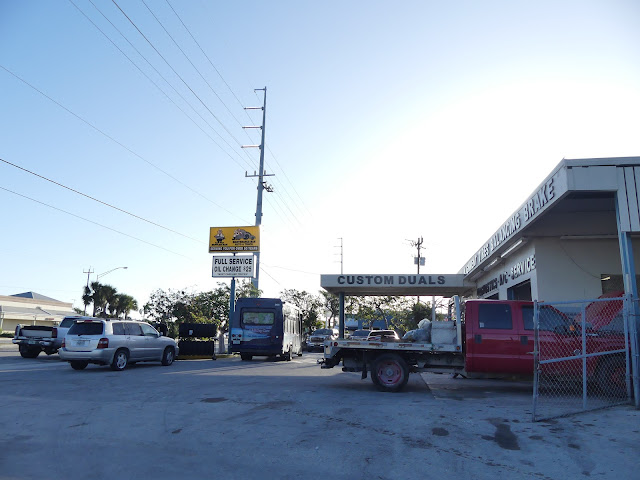