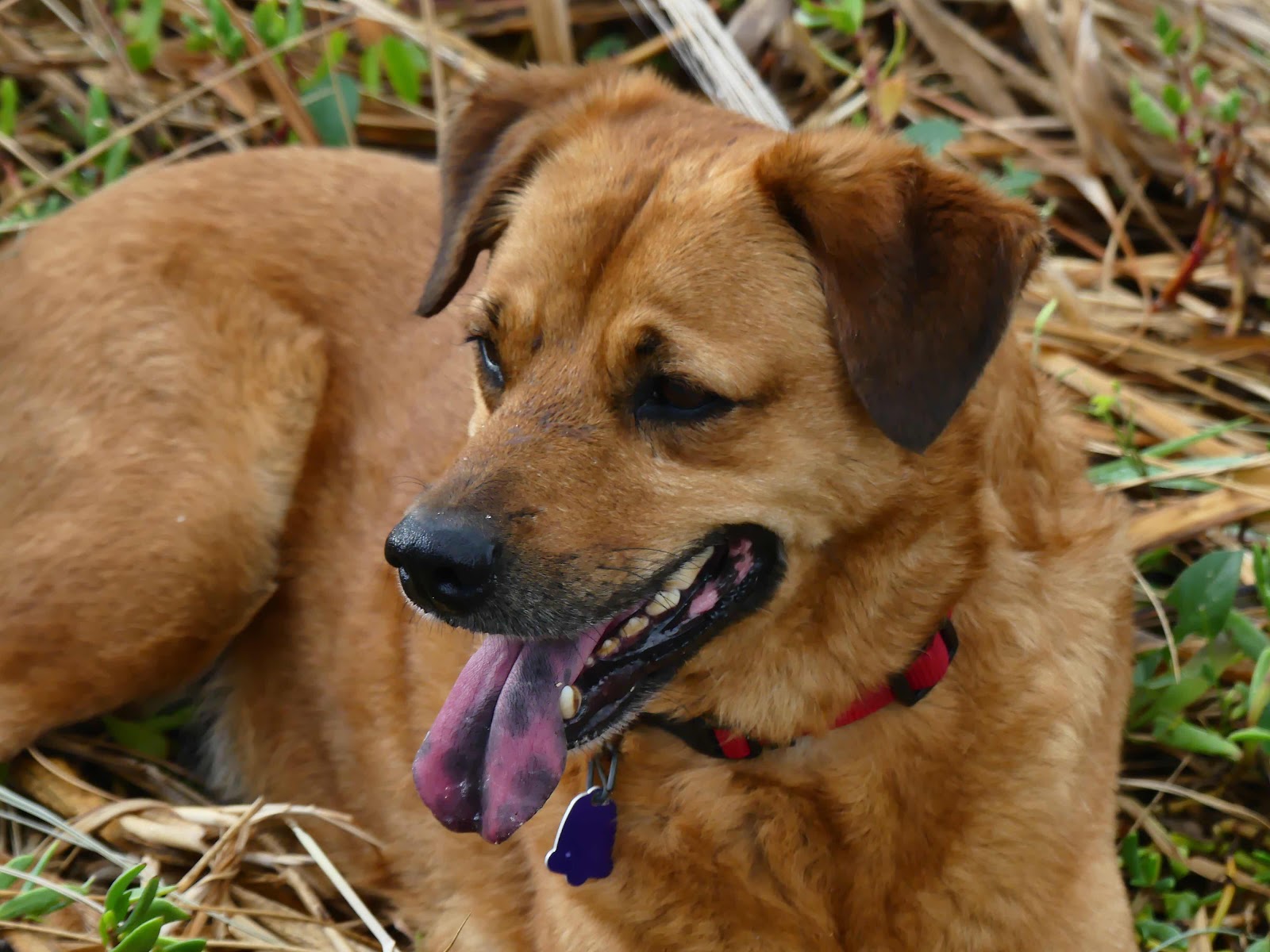 I was quite surprised to read the headline in the newspaper:


FLORIDA KEYS — Iguanas have joined lion fish and pythons as a public enemy to be eradicated from the Florida Keys.
The large reptiles native to South America now are classified by the Florida Fish and Wildlife Conservation Commission as an invasive species that poses an environmental and health menace.
The FWC “encourages homeowners to kill green iguanas on their own property whenever possible. Iguanas can be killed year-round and without a permit,” the agency says in a fact sheet.
Green iguanas are not native to Florida and are considered to be an invasive species due to the damage they can cause to seawalls, sidewalks and landscape plants, FWC says.
“Some green iguanas cause damage to infrastructure by digging burrows that erode and collapse,” the agency said of roads, foundations, berms and canal banks. “Green iguanas may also leave droppings on docks, moored boats, seawalls, porches, decks, pool platforms and inside swimming pools.” 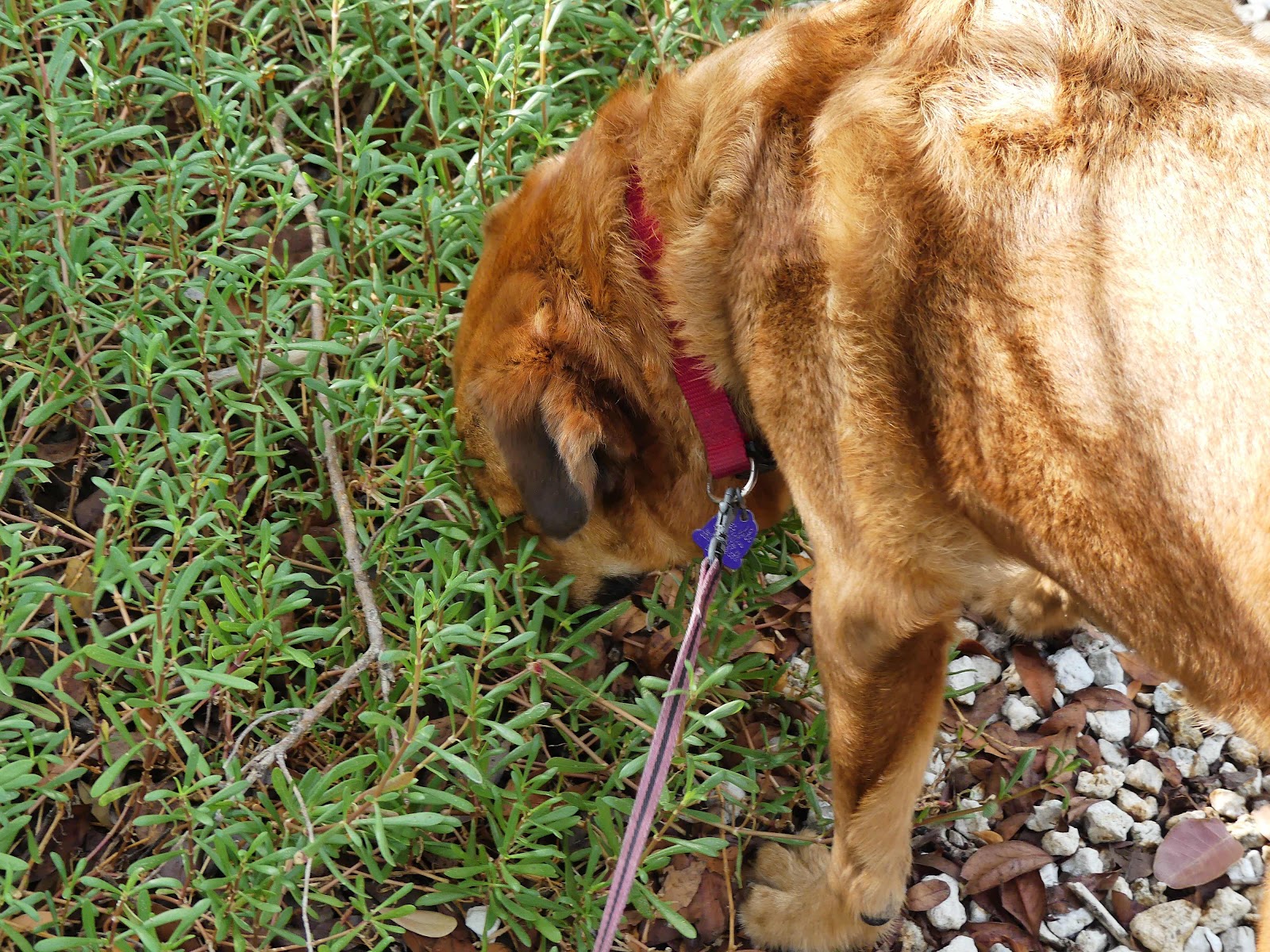 Before I got Rusty in my life just over three years ago he had been observed by his rescuers on the streets of the rural Redlands neighborhood of Homestead surviving by his wits for most of a year. Most of that involved avoiding murderous farmers and nursery owners who hate the abandoned dogs in their neighborhood and shoot and poison them. Rusty not only survived that but he ate what he killed and when finally he was the last survivor of his pack he gave up and let the women who had been feeding him take him into foster care.  Consequently when I got him he was terrified of fireworks like shots, big dogs like the ones that had savaged him, and little else. He slept with one eye open, literally, and hated to be fenced in or kept indoors. I immediately gave up trying to  fence him in and decided if he wanted to live with us he could do it on his terms coming into the house through his own door and staying safe in our driveway by his choice. I also continued the practice of feeding him food he liked that he didn't have to kill himself. 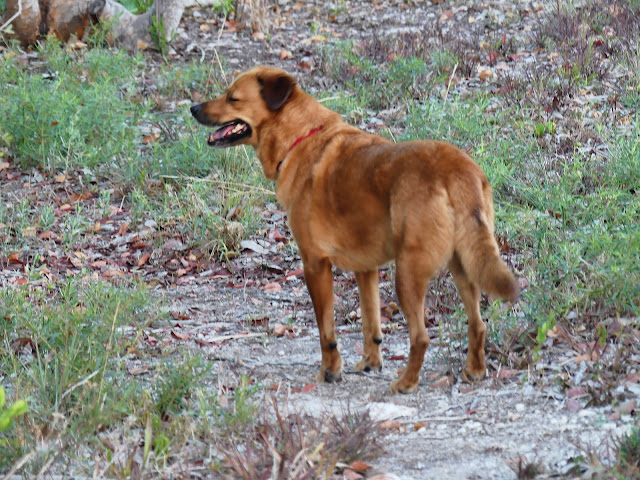 The killer instinct didn't leave him right away but my horror at his ability to chase and catch small rodents was apparent to him and he very weirdly stopped chasing things to the point he is now afraid of street chickens in Key West especially after a broody hen chased him down Appelrouth Lane when he was innocently walking by. I am happy he isn't keen on chickens as Rusty causing a feather storm on Duval Street would be a  public relations problem. I'm not fond of chickens as I prefer native Ibis which kill insects but quietly and cleanly with a certain native dignity. Back to iguanas. I was astonished the first time he was walking on leash next to me and suddenly he pounced and came back to me with a giant iguana in his mouth and as I looked he bit down and killed it as casually as you might bite  a carrot. After that he seemed to acknowledge my middle class reservations about killing even these nasty lizards but he never stopped chasing them. I thought this one was a goner: 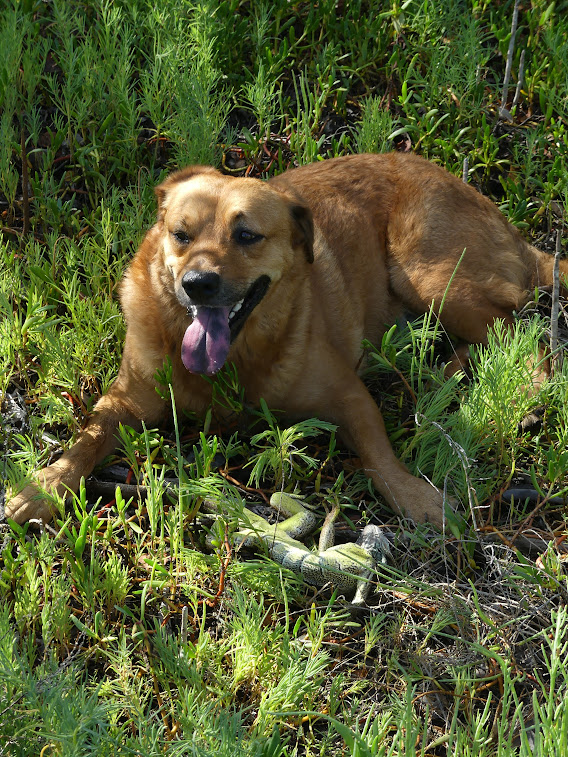 But no, I soon learned the cunning little dinosaurs play dead and as soon as Rusty lost interest and we walked away they jumped up and scuttled off back to their families none the worse for wear. There again I am not fond of iguanas and it turns out the state is now fed up with them wrecking the local environment but I am not much interested in becoming a killer. I learned to shoot them with an air gun when I lived on Ramrod Key where I was trying to grow vegetables which they regularly destroyed but since then I have no animosity toward them and I simply try to ignore them. For Rusty iguana are fascinating prey, and take huge amounts of concentration and effort to catch even just for fun: 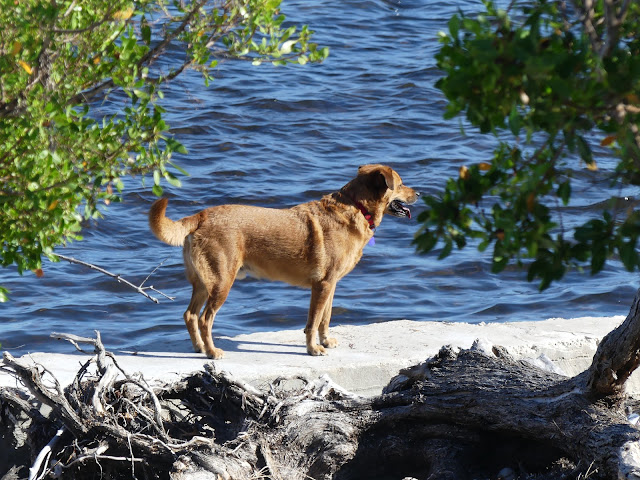 Walking the old seawall near the Old Bahia Honda Bridge, a favorite photo location of mine, he saw this brute sunning himself. 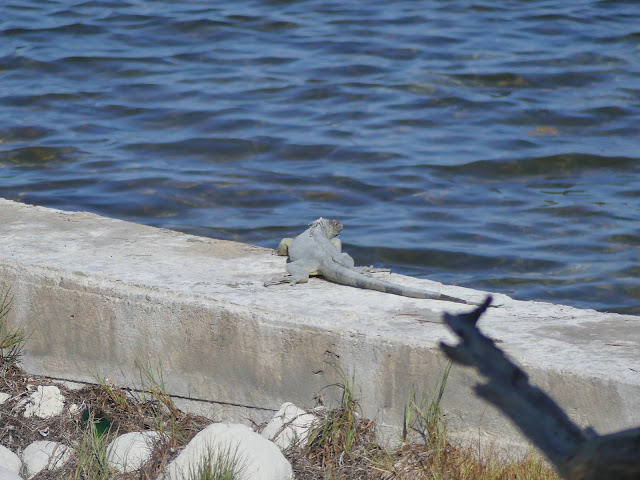 The iguana promptly plopped into the water and disappeared. They can swim underwater for thirty minutes I am told and I have seen them scale walls, and jump 20 feet off decks and high trees. They have no natural prey outside of cars which squash them regularly as they bask on the hot asphalt, but they are ferociously adapted to survive and thrive in South Florida. Rusty started staring intently at the water, which he does not like to swim in: 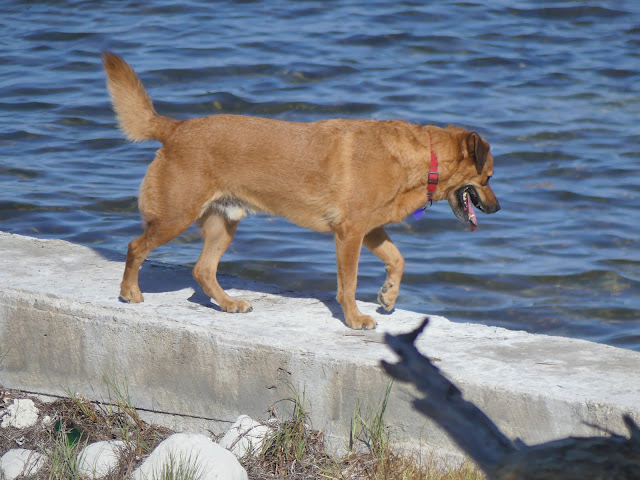 Then he ran to the end of the seawall and started checking the water with a certain obsessed look in his eye.I thought he was being a little exaggerated as I was sure the iguana was gone but short of a quick cold snap disabling it I couldn't see how he was going to get it. 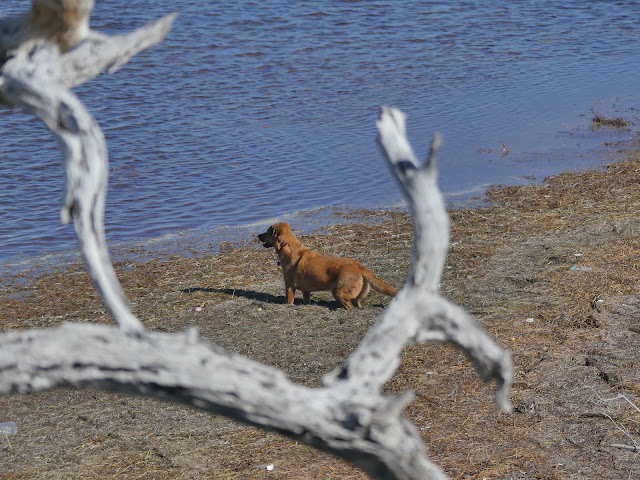 It has been written about quite extensively in the papers but every time south Florida has a cold snap, under sixty degrees say, in mid winter the papers report how iguanas fall out of trees like ripe fruit. They can't stand the cold and when temperatures drop they seize up and pass out. That is the time they are easy to kill as they are unconscious on the ground and whereas normally you can't get close in cold weather they are helpless. Eventually Rusty gave up. 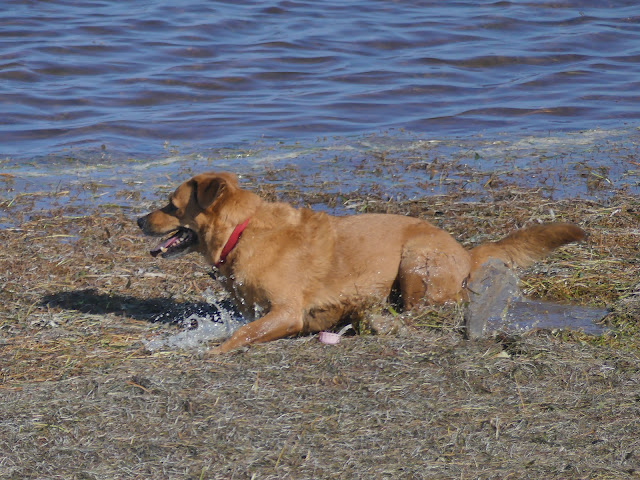 I figured the brute was long gone but no, my dog as usual was right and soon enough I noticed a snake-like head weaving through the water toward the seawall. By this time Rusty had moved on but I watched it come to the wall, climb up the smooth vertical surface like it wasn't there and settle back into its preferred posture. 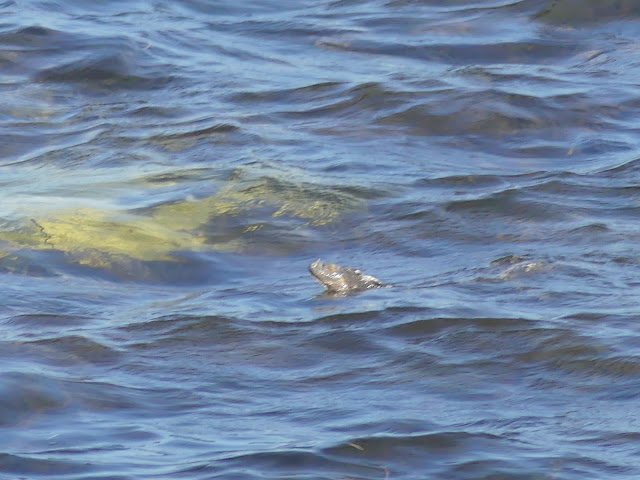 Sunbathing, iguana style after a refreshing swim. Hurricane Irma cut back the population of iguana in the Keys by destroying their habitat and food but they produce hundreds of eggs and and plants are growing back so the population is burgeoning once again. 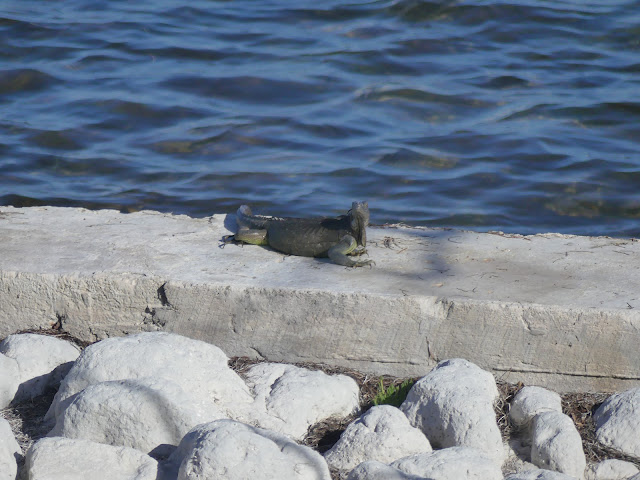 Rusty may have lost the war but I was fine with that. He got his exercise, the iguana were reminded they aren't always king of the roost and it was a lovely day to be out watching the water.  And not just as a hunter. 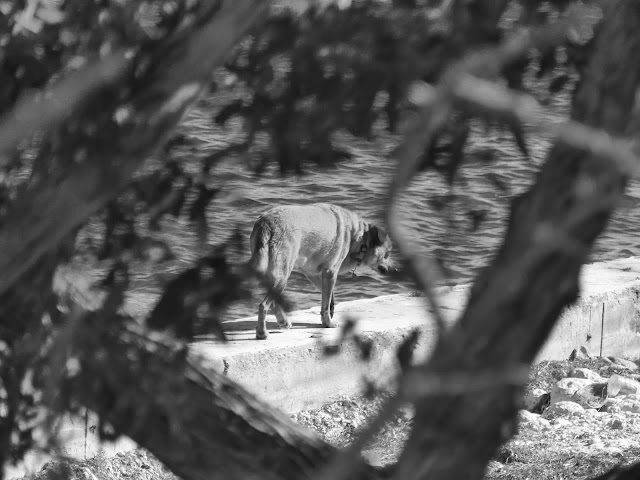 The few tourists who stopped were at the far end of the open space beach combing the rocks and taking selfies with the old bridge behind them. They never even noticed us. 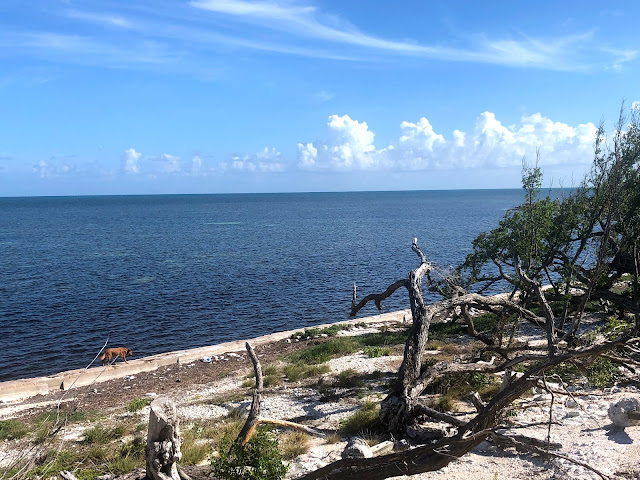 The last time we came here Rusty got one. He jumped into the bushes like a mad pogo stick and came out with lunch. He showed it off to me, put it down and walked away. It was gone by the time we walked back later.  I suppose I ought to carry a machete or something to dispatch the lizards he catches which would be the environmental thing to do, but I am not inclined to kill and prefer to hunt with my camera. 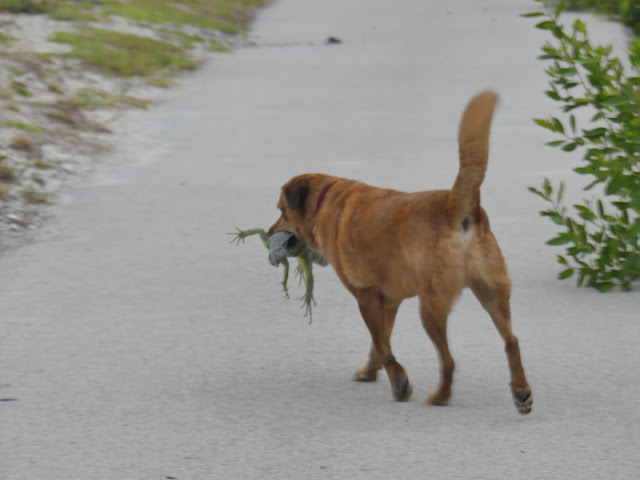 I think about the life my little dog must have had to live, kept by people who didn't want him, thrown to the curb to live by his wits, harassed by big dogs and angry armed people and forced to eat food he no longer even thinks about eating, and yet through it all he is sweet and gentle and obedient and very much a loving family pet. Dogs do amaze me, and when people ask if he is friendly I am inclined to say he is surprisingly tolerant and easy going all things considered. He just likes to prove he still has it, he is still wild at heart and capable of managing by himself. I'm just lucky he prefers to share my life with me, and I am very glad he does.
Posted by Conchscooter at 12:00 AM 4 comments: