This essay from December 2008 grew out of a trip my wife and took to explore Central Florida. Often when you get on the road you seem to manage to get blinded into rushing headlong so we decided to stop and explore and check out Florida. This pause on the road taught us the value of stopping at fruit stands when we criss cross the Sunshine State. 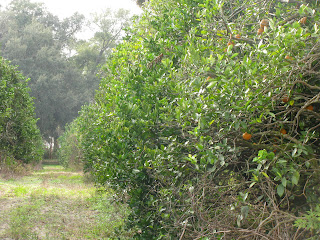 It has always struck me as very old fashioned to stop at a Florida roadside stand and buy citrus fruit. Why bother to haul Florida grapefruit 1500 miles in the trunk of the car these days? This, when fruit from all round the world is shipped to us in such a continuous stream that we don't even know anymore when the season is for the food we eat. Grapes from Chile, tomatoes from Mexico, asparagus from California...and citrus from Citra, Florida. 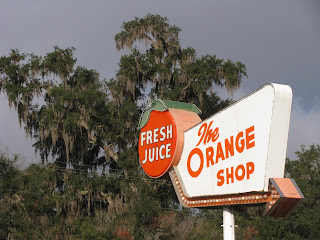 We left Ocala after breakfast and took off for Jacksonville seventy miles down Highway 301 across the top of the state which is all citrus groves, as it turns out, or at least a lot of it is. Interspersed with pine forests and horse ranches and...roadside stands. We were cruising the four lane when my wife said out of nowhere. "I think I'd like a fresh squeezed orange juice." 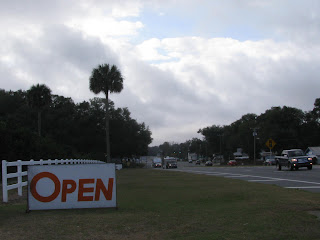 "We should stop," I said. "No," she said. "We'll stop at the next one we see." But I knew better so we pulled a (legal) U-turn and headed in. In to the stupid old fashioned citrus stand that has beensuperseded by international shipments of fruit. 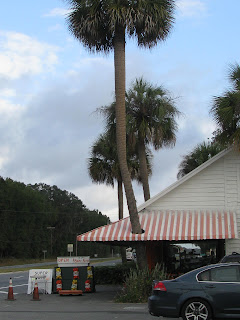 It was a blast actually. We bought two bags of grapefruit for five bucks and for another five we got a bag of tangerines, all piled up and ready to go: 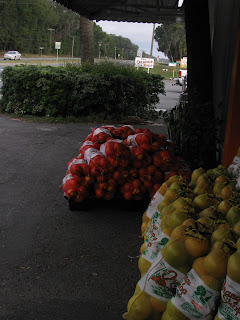 I'm pretty sure if you shop a lot you wouldn't be surprised by the interior of the store, cookies, jams,mustards honeys and all the bric-a-brac one should probably expect in a store that sells oranges and lemons... 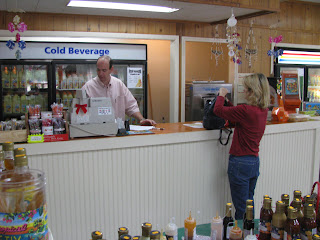 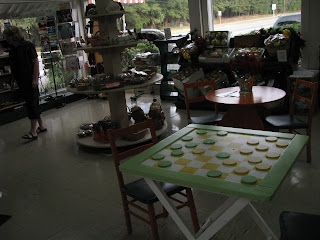 I wasn't about to be seen walking around in one but I took a quick picture to remind myself where I was: 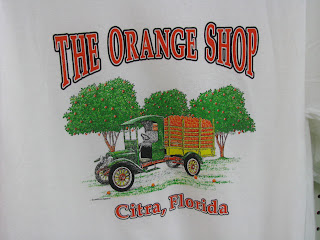 And the old fashioned truck might look cute but orange processing has apparently moved along a bit with the times: 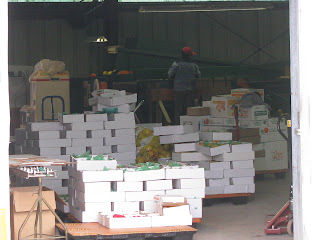 When I lived in Fort Myers almost twenty years ago (oops!) I used to ride across the state to visit a friend in Palm Beach and a half hour out in the country I would ride towards LaBelle which in those days, and may in these days for all I know, had an orange processing plant by the side of the highway, west of the town. When they were working, it smelled like the sweetest orange sponge cake I had ever eaten as a child, and my nose would twitch under my helmet like a dog as a I passed by. Oranges and bananas, some of my favorite fruit and in Florida they grow together: 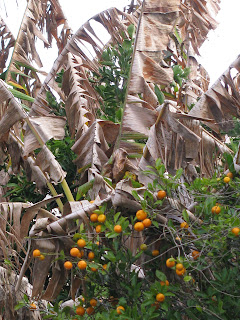 Take that you ski fanatics hoping for snow and ice this Christmas Day. Put me in an orange grove when the fruit are ripening and I will be happy. 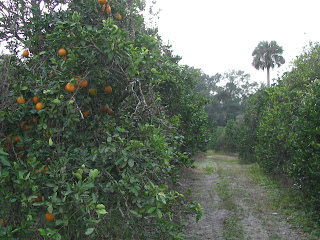 We got back in the car clutching a quart (liter) of sweet fresh orange juice snagged for just three bucks and set off again down the highway. 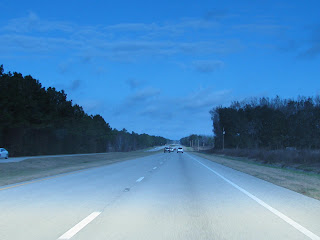 That was definitely not my last stop at an orange shop on a Florida highway. But next time I'm going without my wife because I have a feeling an orange flavored chocolate something might taste good while on the seat of a Bonneville. It's worth remembering too, not a hundred years ago, oranges were so rare and expensive they were treasured Christmas gifts. As they should be.


The title for this freshly published essay came to me from ditty we used to chant in my childhood in England. It turns out the nursery rhyme had actually to do with politics of a different era, like most such things seem to tend to.

The history and origins of the lyrics - sinister!
The words and lyrics have been much loved by generations of British children. The place names relate to some of the many churches of London and the tune that accompanies the lyrics emulates the sound of the  ringing of the specific church bells. The words of the nursery rhyme are chanted by children as they play the game of 'Oranges and lemons' the end of which culminates in a child being caught between the joined arms of two others, emulating the act of chopping off their head! The reason for the last three lines of lyrics are easily explained. The 'Great Bells of Bow' were used to time the executions at Newgate prison, which for many years were done by means of beheading. The unfortunate victim would await execution on 'Death Row' and was informed by the warder, the night before the execution ' here comes the candle to light you to bed' of their imminent fate and to make their peace with God! The executions commenced when the bells started chiming at nine o'clock in the morning. When the bells stopped chiming  then the executions would be finished until the following day!
Posted by Conchscooter at 12:00 AM No comments: