A friend of mine suggested Tutu Tuesday is the most popular Fantasy Fest event for locals, vying with the local's parade ("Masquerade March") on Friday for the title of most desirable event. After my walk around yesterday I'm wondering if I shouldn't get a tutu next year for my dog: Rusty had a blast. 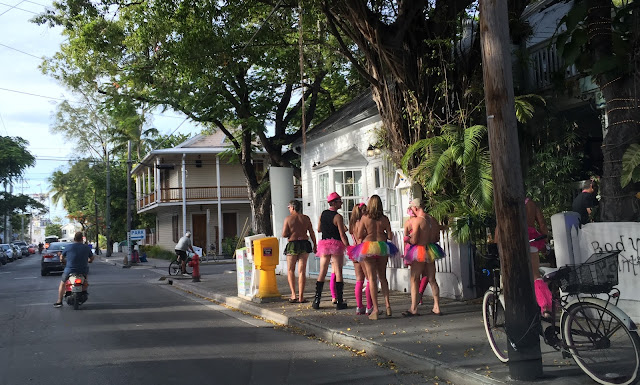 I saw the crowd pictured above on Whitehead Street but I held out little hope of finding parking for the Fusion. I drove up Greene with a no hope attitude, especially when I saw these old goats dragging their feet on their Harleys, imitating the scooter rider above who was actually stopped. Foot dragging to me is a sign of not being in control of your machine and riding badly while I'm stuck in a car (sorry Rusty) is slightly aggravating. Put your feet on the floorboards and learn to control your machine with your balance. Rant over. 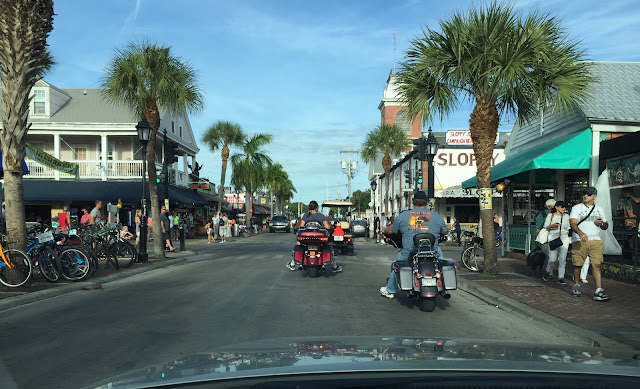 Walking back to Duval Street from Greene and Simonton I stopped some kind folks and asked for a picture. Like this lot: 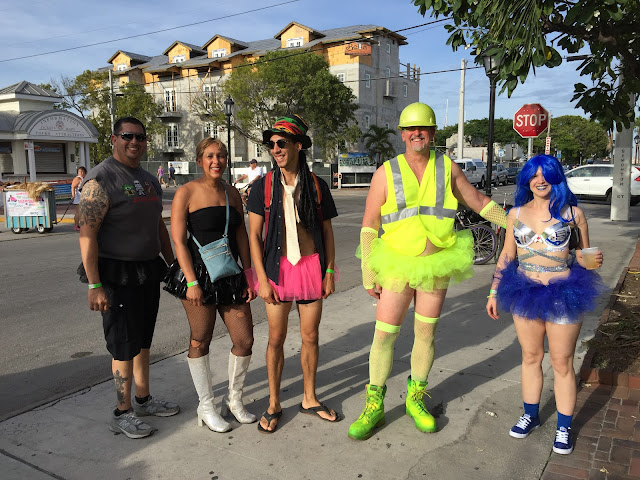 Rusty was sniffing bushes and drains, as you do, while I was talking toa friend when a nice lady came up and made a fuss of the dog. She said she read the blog but didn't want to be "on the Internet" (too late for that methinks in the modern era) so I deleted the picture of her rather nice smile and offer these fine folks instead, in the spirit of Tutu Tuesday. In these situations I ask myself what their neighbors would say Up North if they knew these upstanding citizens were parading around in public in toile and crepe chinoise and showing off the tops of their legs? 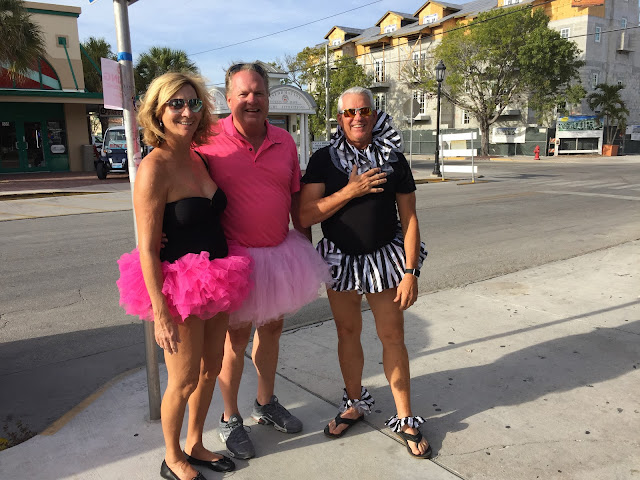 I lack the necessary nerve to dress up like this but it does seem to be a popular way to spend a Tuesday afternoon with assorted bars offering venues for night time parading around in inappropriate clothing.  My surprise was Rusty. Six months ago he was a timid little street dog afraid of every sound and squeak. Yesterday he turned in another bravura performance as Master of his Domain. 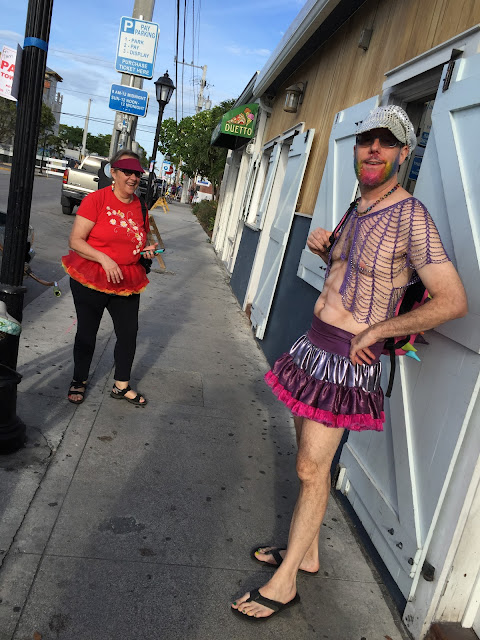 He strode among the freaks and tutus with aplomb, tail up high like a feathery flag fluttering between the legs and precariously carried drinks. 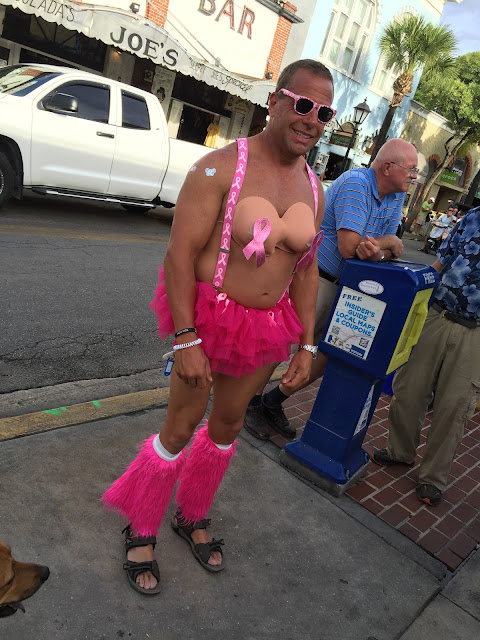 When he meets other dogs, especially his own size or larger he used to get defensive but he was on Duval to party yesterday. His tail fluttered like a flag in a gale and he pranced like he wanted to play and run. I'd never seen that before especially in such a crowded noisy place. 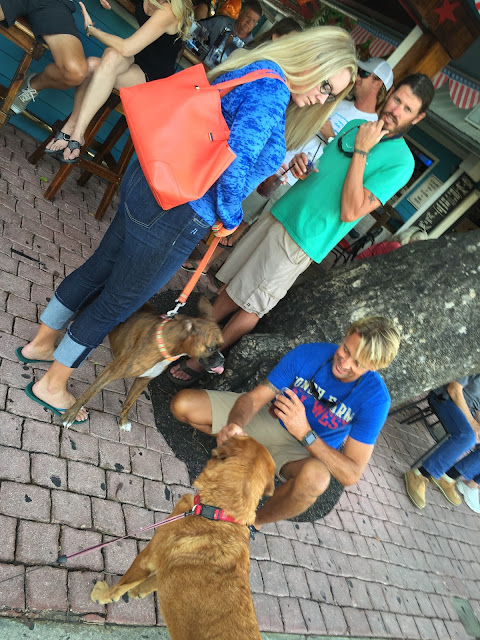 He practically started purring as the bouncer chatted about fake IDs for youngsters and how he spent a fortune treating his old rescue dog's teeth. Nice guy he had a tattoo of his 17 year old animal on his bicep. I'm not doing that! 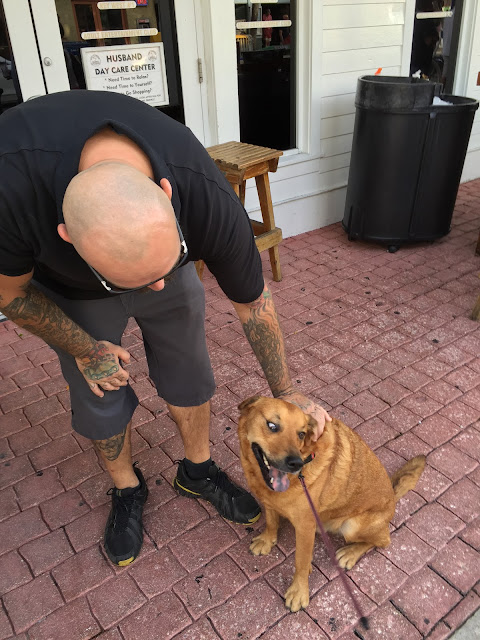 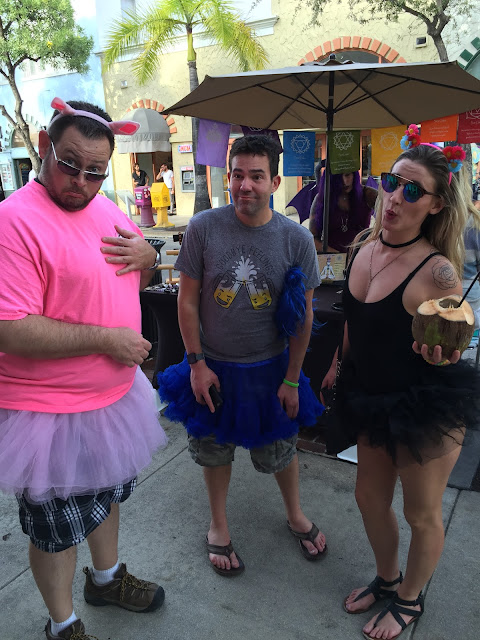 I don't know what to say. Everyone was determined to look ridiculous. It was very laid back and fun. 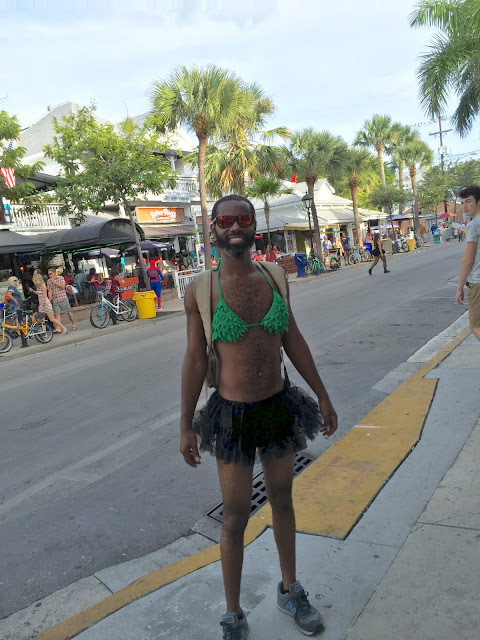 And here he was again, and I wished we in an open space like a field where they could have run and chased each other as much as they wanted too. 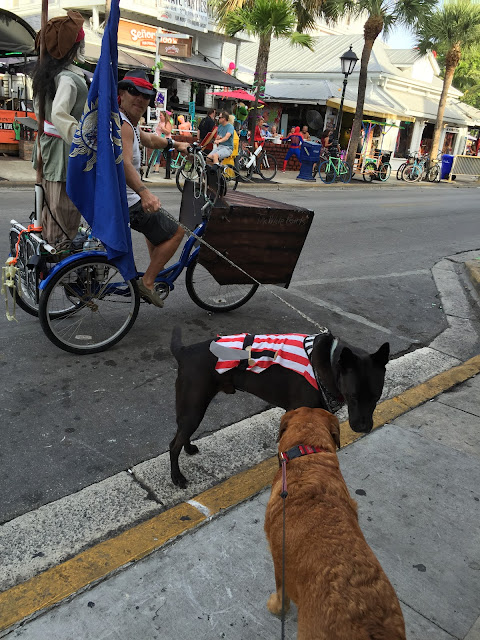 Perfume seller trying to get Rusty to take  a sample. He was not playing. I wasn't either when they suggested their grossly over priced wares make good gifts. These stores are a disgrace to Key West famous for over charging the unwary and taking advantage of incautious shoppers. 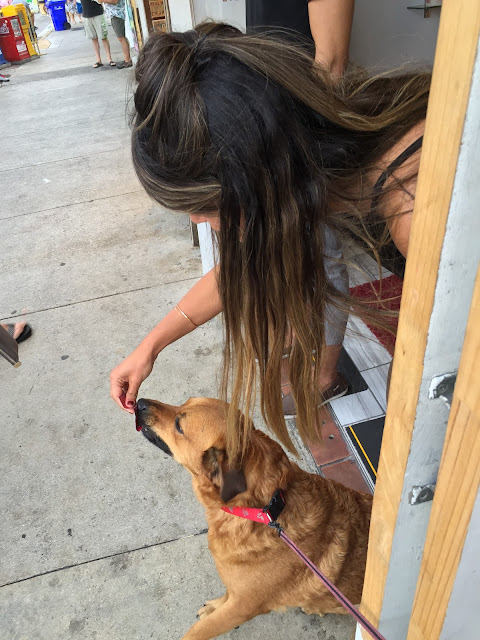 One good thing about tutus compared to other more elaborate costumes is that you can ride a bike or scooter in one. 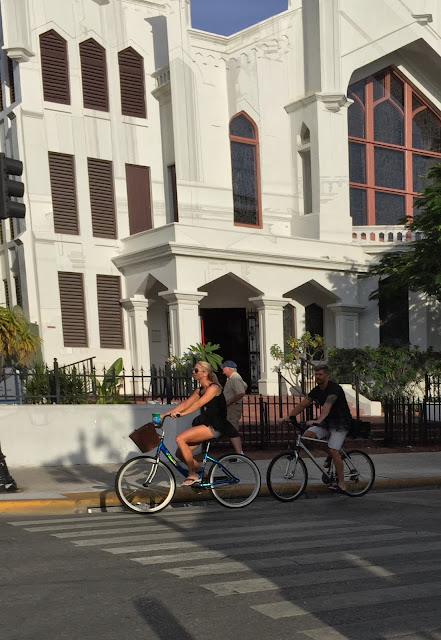 Or simply go for a walk. 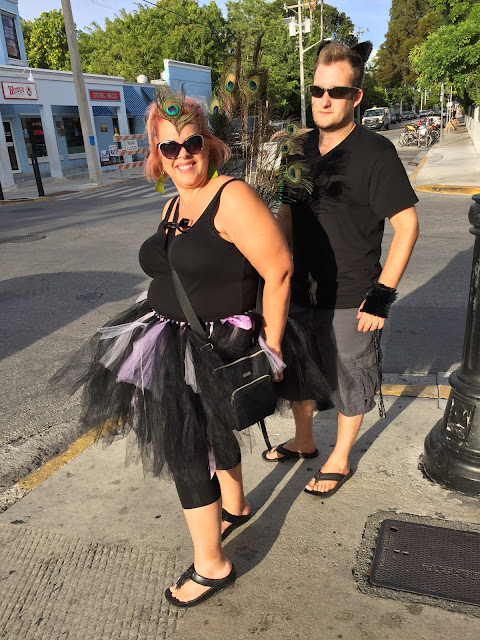 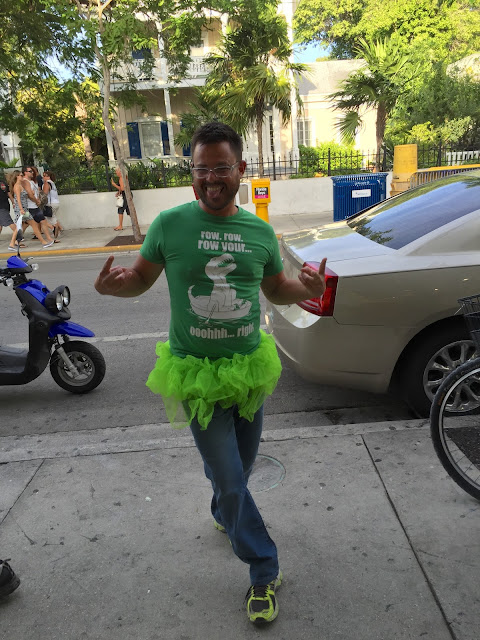 Key West being the town it is Rusty had his own comfort stations posted along the sidewalk. 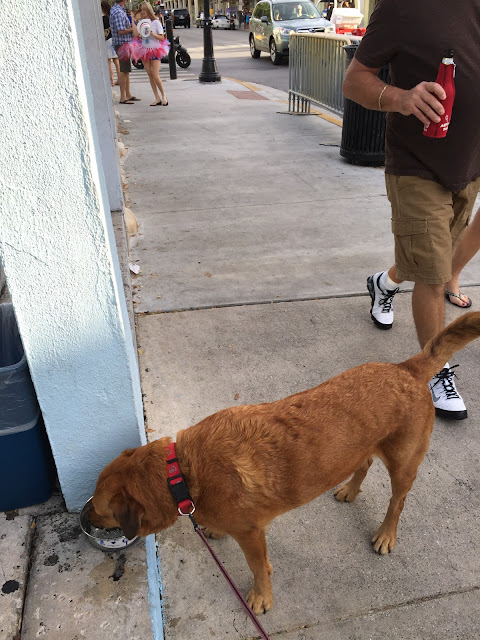 Alcohol nudity and crowds of people unused to either, yet it was a serene cheerful afternoon for all concerned. 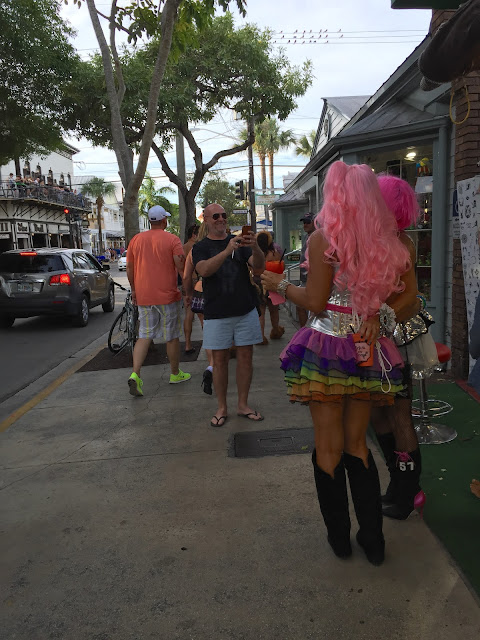 The only thing that did freak Rusty out was this idly wandering human cockroach. His nerves got so jangled he wrapped himself round a lamp post and we had to have a little time out. 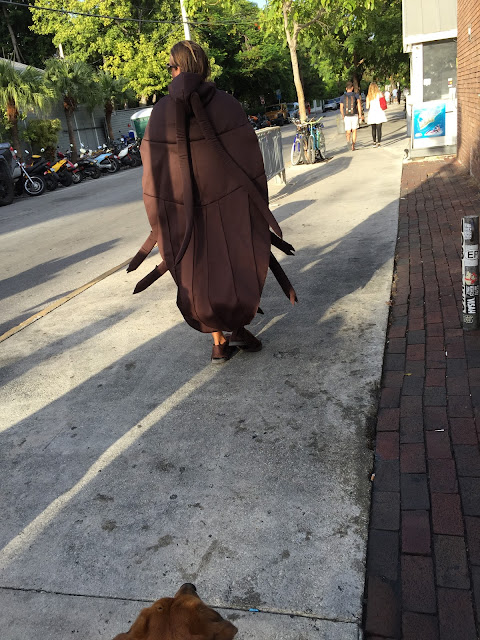 These two left him indifferent: 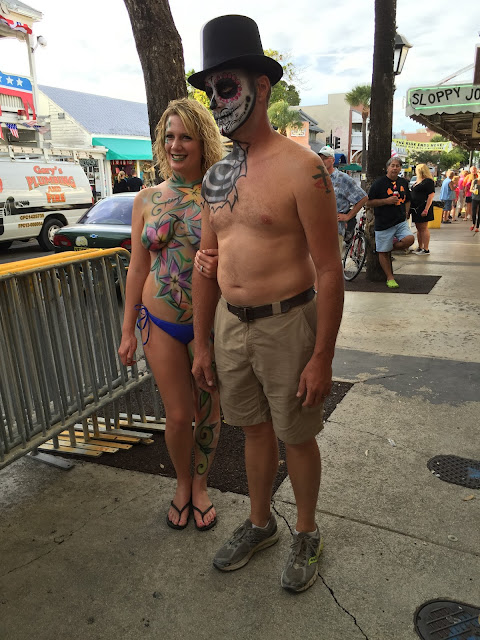 It was time for some rest and for once I happened to be walking with a ten dollar bill in my pocket. 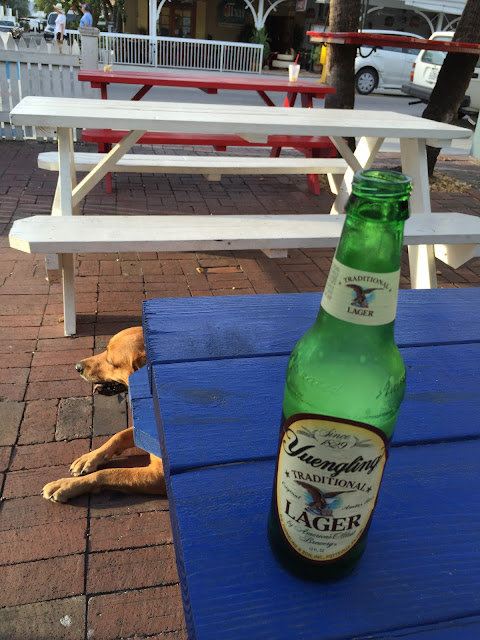 Half of it went on this bottle and if you think that's expensive you should check hotel prices during Fantasy Fest in Key West. They'll make you want to put on mascara to hide your tears and a tutu to jolly yourself up.
Posted by Conchscooter at 2:26 AM 2 comments: