Stanley Goldman is my wife's uncle, the last surviving brother of her late father. The family grew up in the Quad Cities area between Davenport Iowa where my wife was born and the east side of the Mississippi River in Rock Island where she spent the first 8 years of her life. My late father-in-law decided selling furniture wasn't his favorite line of work so he emigrated to Palo Alto, California where my wife graduated High School, UC Santa Cruz and Hastings School of Law in San Francisco. She is all California though she got her start on the banks of the Mississippi River and had she stayed there we'd never have met. Her family made a name for themselves through their furniture store, an institution in the Quad Cities. Unhappily Stanley is fading fast and will not be with us for long and his store Hyman's (named for Hyman Goldman the founder) is finishing up it's going out of business sale after a 90 year run. It is inescapable that those of us who are in our fifties are faced with the changing of the guard as the generation before us dies and we are left to carry the flag as the old timers. Just this week 94 year old Sadye Bregar, one of my wife's aunts died in her Los Angeles nursing home after s[pending years under the Alzheimer's cloud. They really were a great generation. I shall miss them.

From the Quad City Business Journal.

No piece of litter was safe in the streets of downtown Rock Island under Goldman's watch.

No flower planter stayed bare or untidy under Goldman's watch.

No customer entered his Hyman's Furniture stores without receiving a friendly greeting, a handshake or a bottle of Coke under Goldman's watch.

And most importantly, the lights never went out in downtown Rock Island under Goldman's watch.

Even when the department stores and other retailers were abandoning downtown or disappearing altogether, Goldman kept his roots and his furniture empire planted firmly in downtown.

But after 70 years in the business founded by his parents Hyman and Rose Goldman, the 89-year-old Goldman is retiring and closing the doors of Hyman's, which has been in existence for 90 years. His retirement, which was marked by a public reception in his store last week, marks the end of an era for downtown.

Former Rock Island Mayor Mark Schwiebert described Goldman as a "pioneer" in downtown development. Goldman, he said, always knew what others are now discovering - "you don't see healthy cities if you don't have healthy downtowns."

Brian Hollenback, the president of Renaissance Rock Island, sees Goldman as one of the original downtown architects, whose investment and generosity helped pave the way for the healthy downtown Rock Island now enjoys. "Stanley did much for the community and went above and beyond for those that mattered most to him, his customers," he said.

At the retirement reception, Goldman and his wife, Ann, were greeted by dozens of friends, customers, city leaders and fellow downtown merchants. Goldman sat comfortably in one of his La-Z-Boy chairs as visitors shook his hand and shared their memories of Hyman's. 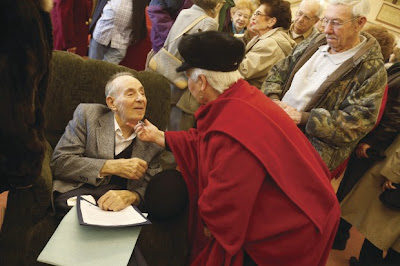 What could have been a melancholy day was not. "I'm happy," Goldman said softly. "We've made so many friends. If I needed help, they were there. If they needed help, I felt I was there for them.''

Perhaps downtown's biggest cheerleader, his goal had always been to keep the lights lit in downtown. "A downtown without people is not a city," he said.

That is why when shopping malls forever changed the face of retailing in the 1970s and the farm crisis of the 1980s threatened the existence of Quad-City downtowns, Goldman did his part in Rock Island by investing in one empty building after another. He eventually owned as many as 16 different storefronts - dominating 2nd Avenue with furniture by Hyman's. Over the years, he filled buildings with other tenants and helped other entrepreneurs get their own start.

But the time has come to "pass the baton of business and community development to others," Goldman said.

"I see him as a very passionate man who loves his home and his community as well as a very good business man who realizes he spent his entire career putting his customer first," he added. "Now as part of his legacy, we own and manage 17 commercial spaces and we continue to bring new investment online."

Over the years, Goldman has donated some buildings and sold others to pave the way for more development in downtown. Some of the projects include the Goldman Lofts, Renaissance Rock Island's own offices and the Rock Island YWCA outreach facilities. The family's most recent donation is the Goldman Family Block. Stretched along 2nd Avenue, it houses H&R Block, Renaissance Construction, Jarvis and Expression of Life and will become home to a business incubator project led by Renaissance.

"He's from the old school. If you make your money in a community, you invest your money back in the community," said Hollenback, who along with the family and city's development staff is working on securing a new project for Hyman's 3rd Avenue store.

That last remaining Hyman's storefront is a prime example of Goldman's devotion to downtown. He acquired the former McCabe's Department Store in 1986 when the store closed. In a nod to its history, the original S&H Green Stamps signs still hang in the store.

Goldman is unwavering in his values of integrity, fairness and quality service as the store prepares to close, said his son, Robert "Rob" Goldman. "Dad knows how he wants things; he's uncompromising; he wants his way - and he's just plain stubborn."

Rob Goldman said his father was still working in the store every day up until about a month ago. "He calls every 15 minutes all day long," the younger Goldman said last week, showing the call history on his cell phone. "I tell him ‘Yes Dad, we did that."

But he had to put his foot down when his dad still wanted to provide delivery of closing-out purchases as the store always has. "I told him we can't deliver 45,000 square feet of furniture."

Being part of the store's finale is important to Goldman's family, he said. In fact, Rob and his wife, Miriam, and his sister, Connie Gersick, and her husband, Kelin, all have been assisting with the sale since it began Jan. 1. "It was the busiest day in the store's history,'' the younger Goldman said. Some of their cousins also are flying in to tend store and make sure a family member is on hand throughout the sale's duration. They expect to close within 60 days.

‘‘There is a piece of all of us in this store,'' he said, sharing vivid memories of growing up there and "working" at age 4. "We didn't use babysitters much," he joked.

Rob Goldman reminisced how he learned more about business, integrity and human nature from sitting in the store and watching his parents interact with customers. "Mom and Dad would sit down with a Coke and ask the customers to ‘tell us who you are and where you're going (in life).' "

That business style "worked in its time. It had good values," their son said.

He recalls vividly how his dad's quick thinking saved their entire inventory from the 1965 flood that devastated downtown Rock Island. The first move was to flood their basements with clean water to keep the dirty river water out. But then "Dad hauled in a bunch of homeless men from the Rescue Mission" to help move all the furniture to the upper floors.

"They all worked so hard," he said recalling how they carried furniture up flights of stairs.

"He just figured out what to do," Rob Goldman said, recalling how he learned that day that "you treat people with respect and about not having doubts about anyone. People who are given an opportunity will rise to the occasion."

That same year, the then 14-year-old Goldman watched his dad prepare to defend his stores during racial unrest in downtown Rock Island. "We believed there was the potential for breaking windows and civil unrest," he said, adding that his dad taught him how to use a fire extinguisher in case the disturbances led to that. Standing in their darkened store behind the huge building posts, he said his dad said "I'm not going to let anyone take over my store and I'm going to defend my property.''

But that was how he ran his business and his life, his son said. "He just did what had to be done. There was never a job he was above doing. If he saw something wrong, he'd get out and fix it."

That philosophy extended to his broader vision for Rock Island. Goldman was one of the 13 founding members of the Development Association of Rock Island, or DARI, which was formed in 1989. It now is part of Renaissance Rock Island.

"He was the person who could be very generous with the community and extremely loyal to the downtown," Schwiebert said, adding that Stanley and Ann Goldman never did "anything for the recognition."

In fact, Schwiebert said they had to be convinced to let the city make an announcement when they donated some of their buildings for other development. "I had to explain to him that it allows us to show their generosity, but it also serves as an example to others."

Schwiebert, who served on the city council during the turbulent 1980s and then went on to be mayor for 20 years, said Goldman was always a part of the important initiatives. He not only helped found DARI to spark more development in Rock Island, but he was there when the city created The District and part of the Downtown 2000 discussions.

"He was always sharing his views," he said, recalling Goldman's quiet demeanor. "Stanley's more common way of expressing himself was to send you a letter on Hyman's stationery, single-spaced with no capitals that would share with you his perspective."

"Naturally, we didn't agree on everything, but his perspective was always worth listening to,'' said Schwiebert, who graduated from Rock Island High School with Rob Goldman and the current Hyman's store manager, David Rockwell.

Copyright 2011 The Quad-City Times. All rights reserved. This material may not be published, broadcast, rewritten or redistributed.

Posted by Conchscooter at 12:01 AM 3 comments: Links to this post