Getting Around Key West

I was driving into Key West one morning when I saw this vehicle in front of me and it was clear to me that winter is upon us. Seasons are hard to see in Key West when you are used to obvious stuff like snow ice and leaves changing color and dropping off trees. Nothing like that happens around here, though temperatures do dip from tIme to time before they get back to the normal range of comfortably warm. So when winter hits Up North down here we know by virtue of all the out of state tags that start to clutter our streets. 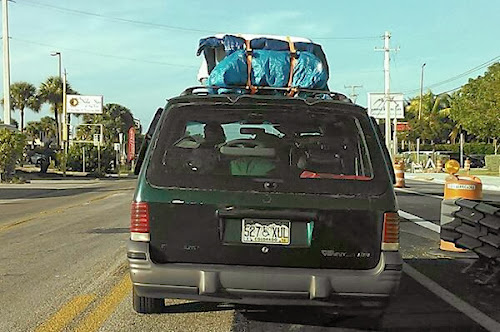 I saw the clutter in the van and I figured its about time the Higgs Beach campers came back too, I suppose. It's not just the idle rich and hard saving vacationers that visit the Florida Keys in winter. Anyway that van was the seed that grew into this essay, a consideration of what makes for suitable wheels in a Key West. A Vespa sidecar perhaps? 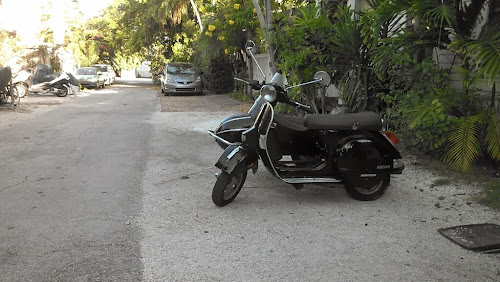 It's not my cup of tea, a 150cc Vespa with a solo top speed around 55 on a good day, now with a hack reducing that to 45mph and awkward parking. Cute but no cigar. 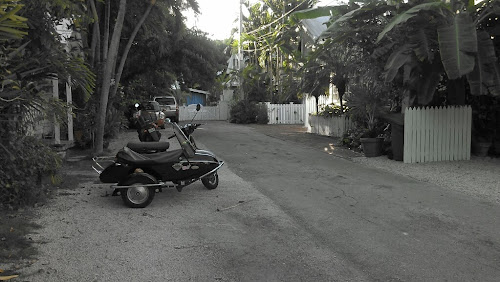 An MP3 scooter perhaps? No longer imported they are built by the people that build Vespas. I rented a 250 version in Rome, where it was excellent for coping with cobbles and streetcar tracks. It had a top speed around 75 but aside from the initial expense it apparently eats brake pads thanks to its weight and is a very complicated and clever piece of machinery. Not good value for money in streetcar-free Key West. 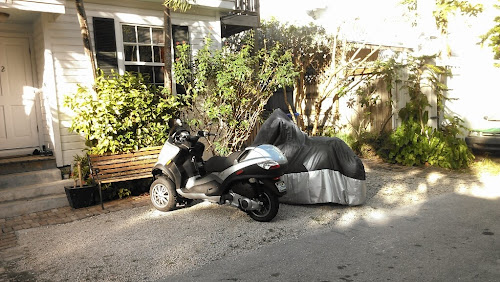 I saw this venerable six volt VW Van, similar to one I owned for a few years in cool damp California, down to the Grateful Dead sticker. It was horrid in winter as cold and damp made starting it an iffy business unless you had a hill to roll down. The interior was great for camping and I took it more than once to Mexico and all round California, until I got tired of the starting issues. For Florida the lack of air conditioning and a cruising speed of maybe 55 would make it terrible for Key West as go-to-mainland car, and awkward to drive around town. No good, but cute and terribly nostalgic. 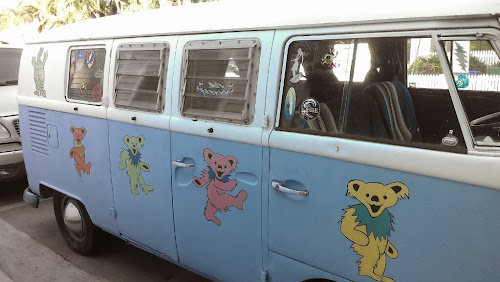 This orange thing is idiotic but people love their high gas consumption, noisy knobby tires and leaky cloth roofs. Ungainly for Key West's narrow lanes and thus not worth it. 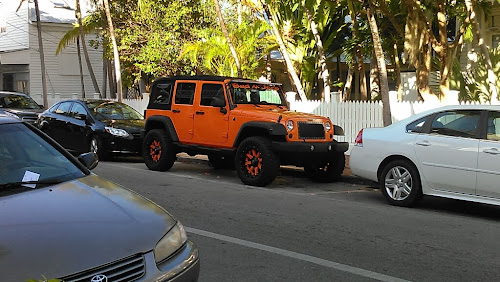 I'd like to think this huge Nissan van came to town loaded with holidaymakers who promptly parked it and rented bicycles to get around town. It's about as big as a conch cottage, and less mobile. 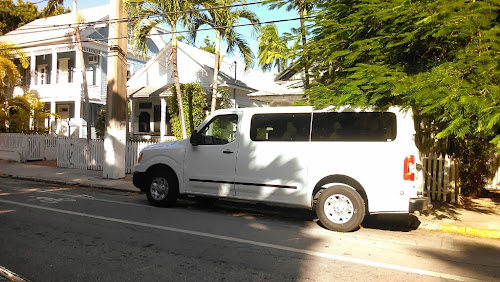 In Key West it's best not to drive an exotic, and the list of "exotics" is pretty long. There are Nissan, GM, Ford, Toyota and Kia dealers. The nearest Honda shop is in Key Largo and all those high powered German machines go to Miami for work though I have heard some local mechanics can do some work on them. I stick close to home with my Ford...I liked this Cadillac, symbol of capitalist excess (I want the new CTS) sporting an illegal Communist souvenir from the Forbidden Isle. Florida only requires a license plate in the back making the front tag holder, if you have one, a good place for self expression. 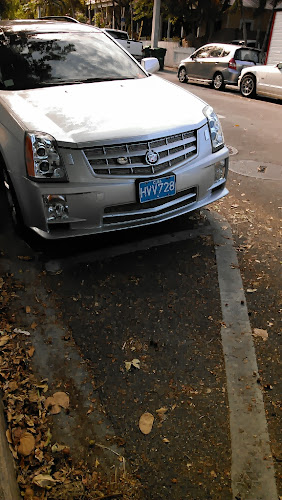 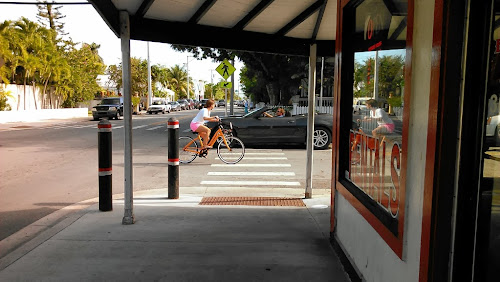 A thousand cc Kawasaki might do quite well, like this one parked at Key Line Square, if you can stand the modern squared off styling. However you could run most of your errands in first gear and pass most vehicles on the road. It's over powered, consumes too much, and around here where roads are flat and straight, it would be overkill. It might pull women, though, there is that. 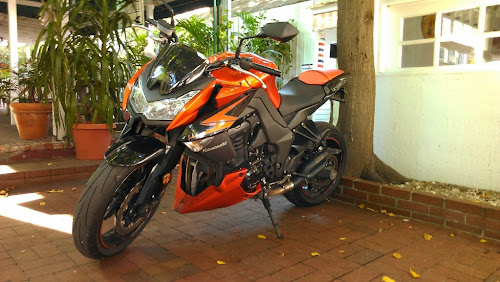 A moped is good and sensible though one should lose the beer can before riding. Drinking and riding is not good nor sensible. It was probably dropped off by some intoxicated passerby, who mistook a scooter for a recycling bin. 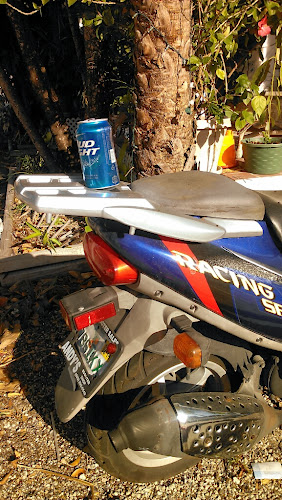 Guest houses and hotels offer guests the use of free bikes, attesting to the popularity of pedaling in Key a West. 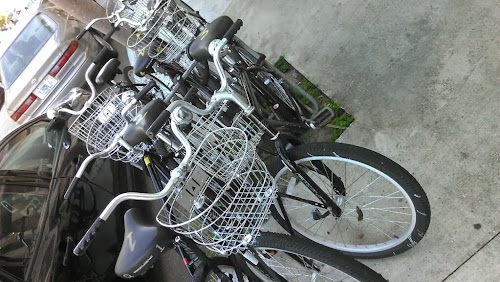 This woman who looks like a bush was painting her bicycle to make her machine distinctive. I wished I had stopped to talk to her, wondering if she knew of the late Captain Outrageous. 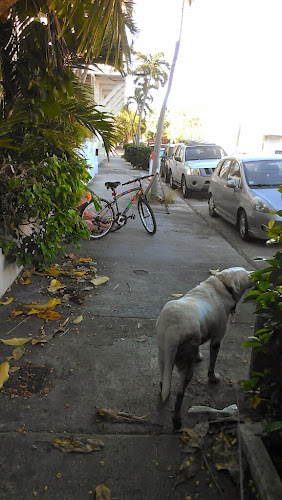 I am falling in love again with Three-in-One oil a simple true lubricant, easily applied and effective. WD 40 is not a true lubricant as it is designed to displace water, hence it's name. This bike could use some penetrating lubrication. 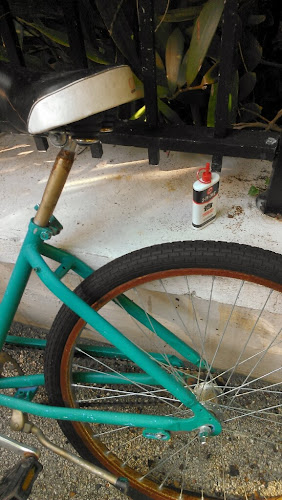 This one could dump the candelabra until next year's zombie bike ride. On the other hand just yesterday I saw a cyclist riding with a bloody stump of a foot strapped to the handlebars. It takes time for some people to dismantle their decorations. 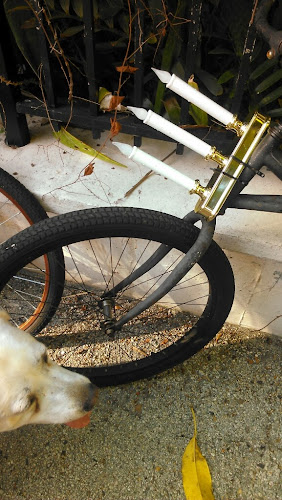 Occasionally I get to see some two wheeled exotica in this town devoted to useful practical wheels. This Spanish Derbi scooter looks truly odd but goes like the clappers I'm told. 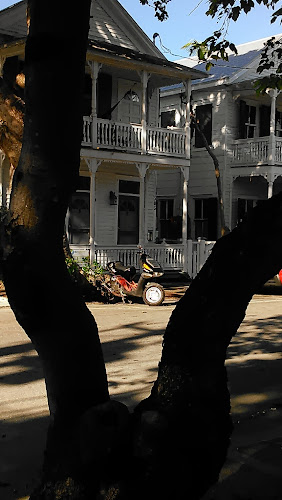 Check out the dude below on Duval Street. This is why some people argue cycling is the way to get around Key West. 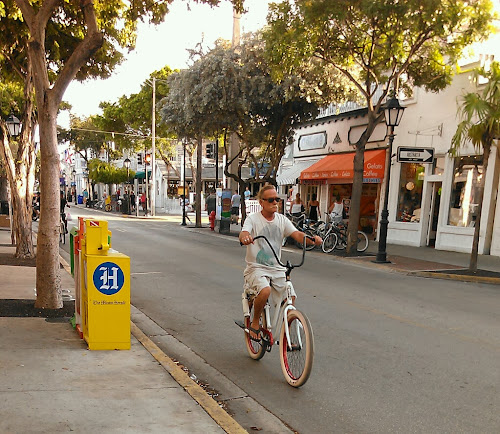 Tourists on scooters have fun but their weaving antics and incessant horn tooting can get old for passersby.

Locals ride too, I barely caught these three young tear ways enjoying their home town on bikes. A great way to grow up in the 21st century. Parents in this town give their kids more freedom than most in fear filled America. To see them loose on their bikes reminds me of the best part of my youth, being free to roam. 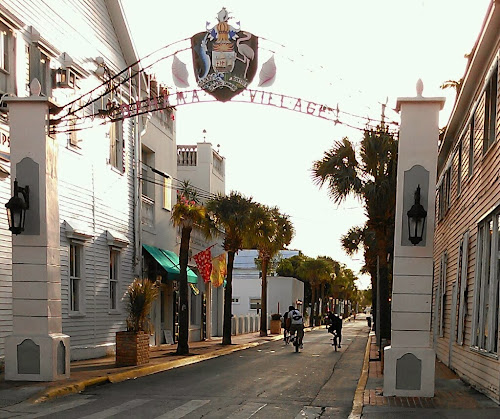 A well organized bike can transport your worldly chattels at speed. 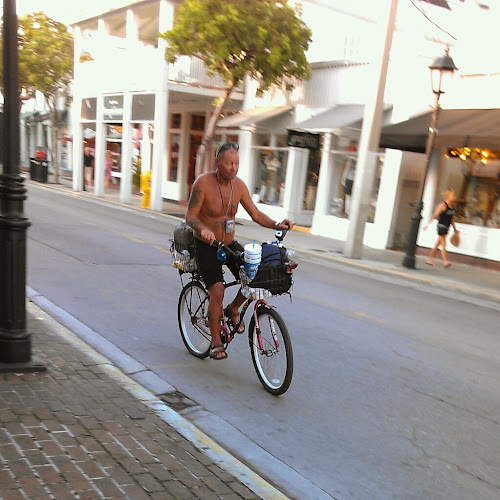 The body language in this next picture tells me they aren't intimate friends. And he seems...nervous? Poor boy. 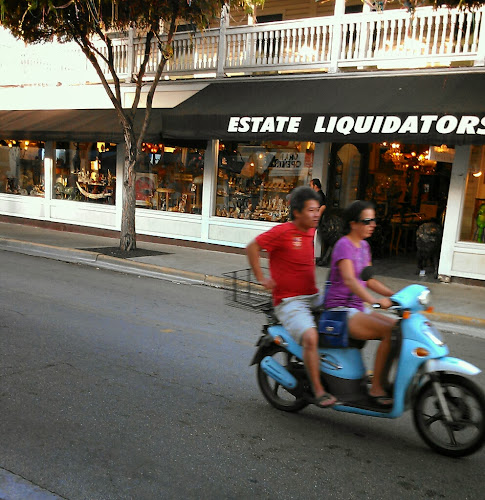 Notice the freedom inherent in the lack of "safety" gear. Passive safety is not high on the list of local priorities.
In 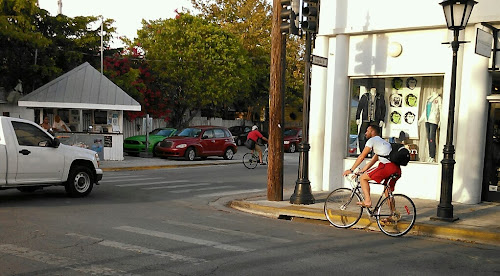 It makes riding easy and convenient so more people ride. This behavior also is not approved on the mainland. It's the same rebellion that fills recycling bins with trash. Oh well, sigh! 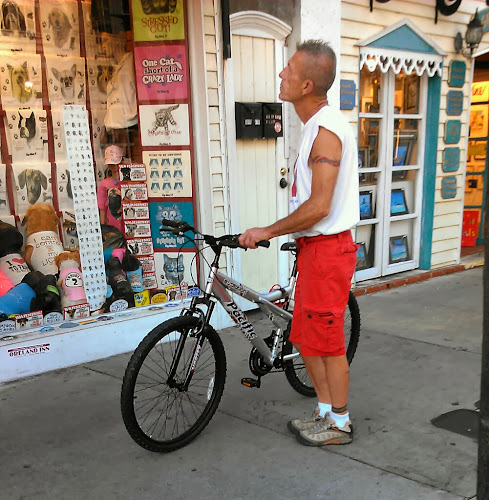 Not locals, but very safe, they think.

Check these two safety equipped cyclists riding in traffic even though safety and good sense dictate riding on the ample...

... and smooth bike path that runs along Smathers Beach. These people are enjoying the best way of all to get around if you have the time to walk:

And a ninety minute tour isn't such a bad idea if you want to learn about this lovely little city and it's wheeled residents. 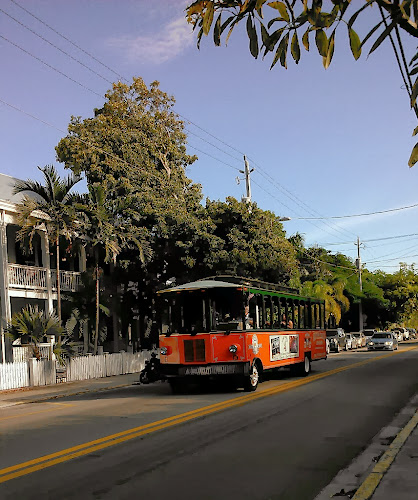 By the way, check out Cigar City Reflections and add Dennis to your daily list of Florida places to visit. I am waiting patiently for his first political entry.