The Weather When It was Cold

From November 24th 2007, only weeks into the life of this blog, this meditation on the weather of the Keys. In those days, when my Bonneville was new and shiny winter meant a few days every now and again of cold crisp air, brisk breezes which seemed appropriate now that we have a very mild January cold front striking the Keys with daytime lows very near 70 degrees (locally considered to be sort of zero). I don't like the cold but the absence of any weather even approaching the 50s for years now has me wondering what's going on.

To Snow Or Not

There was a question, perhaps rhetorical, about the possibility of familiarity breeding contempt when it comes to the bright colors bathed in constant sunshine that is the lot of a Florida Keys resident. The short answer is, no it never gets boring, and no, I never take it for granted. Every day is a fresh reminder of one of the chief pleasures of living at 24 degrees north latitude. 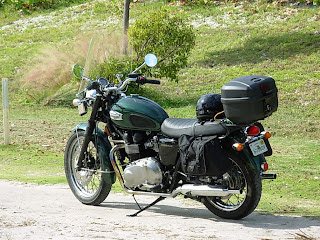 Yesterday I was training a new dispatcher in the arcane science of the police intranet system that connects law enforcement agencies across the country. We spoke briefly to Nome PD where daylight is down to 9 hours a day, ("It's not that dark, we are below the Arctic Circle," their dispatcher told us slightly defensively), and I'm not sure if my trainee was more impressed by the secure law enforcement network or the notion of policing snowdrifts. 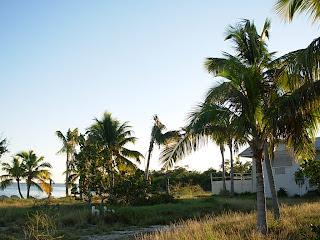 Its getting to be that time of year when it starts freezing Up North and so we have to start policing bad parking, bad public drinking and bad bums begging for money at the tops of their voices on street corners in the Southernmost City. The trick to enjoying life in the Keys is to leave behind as much baggage as you can, and to learn as fast as you can to take things as they are. especially if you come from some button down community Up North where skittles are lined up, i-s are dotted and t-s are crossed. In Key West things just don't work that way. The confrontation brews when people who are used to order and cleanliness come up against chaos and small town clubbiness.
So snowbirds flutter into town each Fall and discover that things haven't changed since last year. Andthey sure as hell haven't changed either, so disorganized parking, public displays of begging (beggars like warm winters too!) and apparent municipal indifference set them off. What to do? Why, call the police! 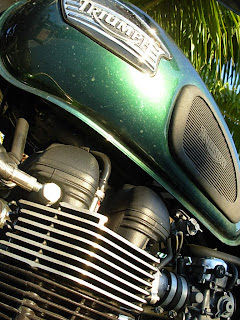 Its hard to explain to well dressed people why its okay for smelly people to occupy city parks during the day, but the Supreme Court has outlawed discrimination on the basis of hygiene so its hard to get police officers to arrest people for being dressed in cerements. Impossible in fact, and this state of affairs hasn't changed since the last time the snowbirds were cluttering up the streets and restaurants. The Citizens' Voice Column in the paper is filling up again with quality of life complaints which are rather dull compared to the throat clutching verbal wrestling that locals indulge in while the more strait jacketed winter residents are away.

These unrelated photographs illustrate the beauty of Winter in the Keys, sunlight takes on a crisp white light, and the brisk cold fronts sweep away the dusty summer particles rendering colors that much sharper. My Bonneville is running equally crisply and is a joy to point down the highway. I've passed the 25-hundred mile mark since October 10th and I'm starting to find my way with more instinct and habit than previously. The Vespa is soon to go back on the "for sale" circuit now that we have those lovely wealthy snowbirds in town, and curiously, I find myself missing the Vespa less and less. The Bonneville is proving to be an easy fun ride in the flatlands of the Keys. In some ways it takes less skill to ride the Bonneville, as the twin cylinder takes anything in its stride, head winds, moonstruck tourists, lumberingheffalumps (SUVs) and juvenile testosterone cases. And snowbirds. 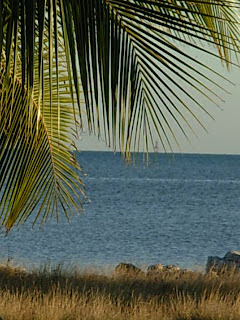 Staring at the Straits of Florida south of Sugarloaf Key has its compensations, on a golden winter evening, but there are occasions when a visit to the movies makes sense too. Last Monday it was the turn of Into The Wild an adventure film about a young man taking things to extremes until they get completely out of hand. Only then does he figure out the meaning of life; when its too late. This young man, according to the movie, made a solo kayak trip down the Colorado river, through the Grand Canyon all the way to the Sea of Cortez. He hitch hiked, made friends, disappeared, regrouped, worked and lazed away sunny desert days. But he did just have to go to Alaska, the borne from which some travelers fail to return. 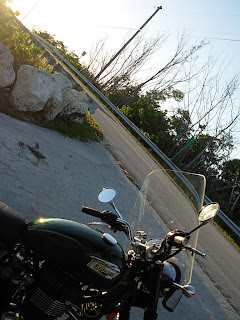 It was a fine movie, absorbing, demanding attention and posing difficult questions about age, impetuosity and the meaning of being alive. I couldn't get over the notion that the true test of one's mettle has to be found in the snowdrifts of the frozen north. One sun's oneself in a pansy hammock under coconut palms in the tropics while heroes forge themselves in blizzards and drizzle and cold slippery roads Up North.

By those restricted standards I am glad to be a pansy. I lived for a great deal too many years in the cold confines of Northern California to enjoy the notion of rain and cold. I just don't like it, and no amount of hairpins or mountains or spectacular views across death defying valleys compensates me for the cold in my fingers, the slush on my boots, and the depressing need to take the car on exceptionally horrendous winter days. Sitting by the fire sucks when compared to stretching out on the deck under the illusory cold embrace of a winter full moon. 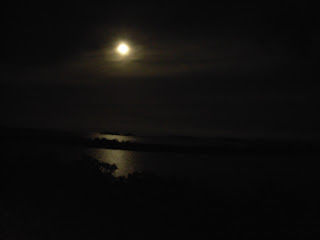 So, no, the winter landscapes never dull or fade or crumble into rust. The moon last night was round and red as it sank into the Gulf of Mexico on my early ride in to work. Today it was cold and steely and threw out shards of ice across the ruffled lagoons in the Saddlebunch Keys. Tomorrow I hope for more crisp and clear and sun, but if not it makes no matter because sooner rather than later sub tropical nature will reassert itself and the sun will shine.

That's what all those visitors and snowbirds come here for after all, not to mention the twittering year round residents, who came for the weather and stay for it too, no matter how unwilling they may be to admit they revere it. The Weather.
Posted by Conchscooter at 12:00 AM 2 comments: Links to this post