The fence behind the buoy marks the end of civilian Key West and the Navy base is off limits to most people which is why the real southernmost point which is on the base is replaced by this cement structure: 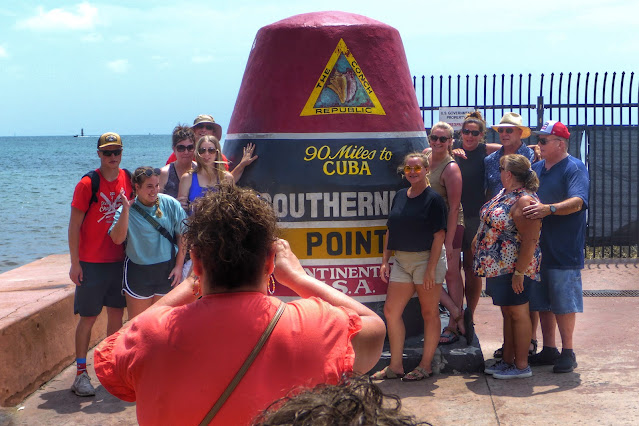 Nevertheless the tourists flock to the site of the purported southernmost point in the continental United States to take their photos. 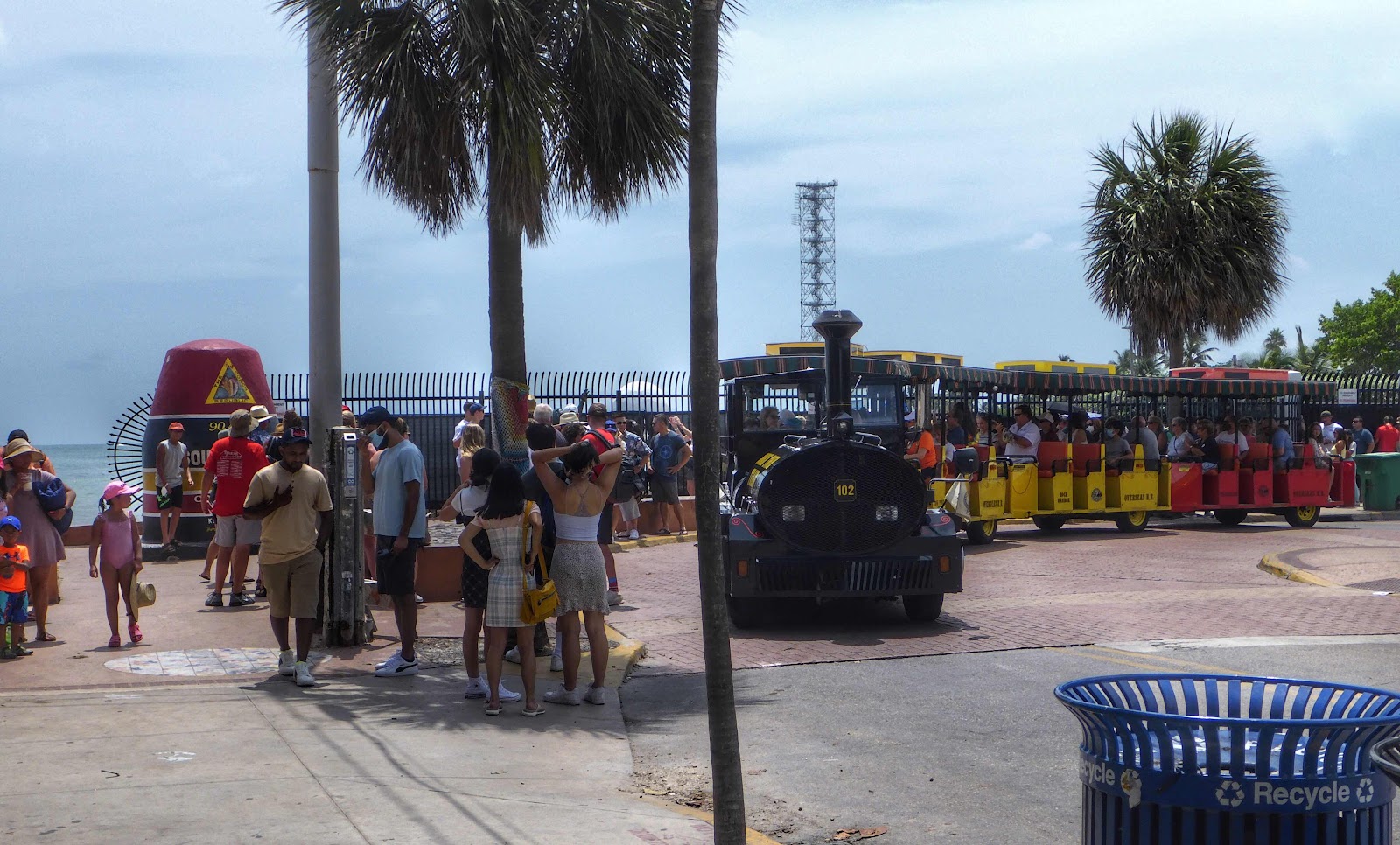 This is during tourist low season, in summer: 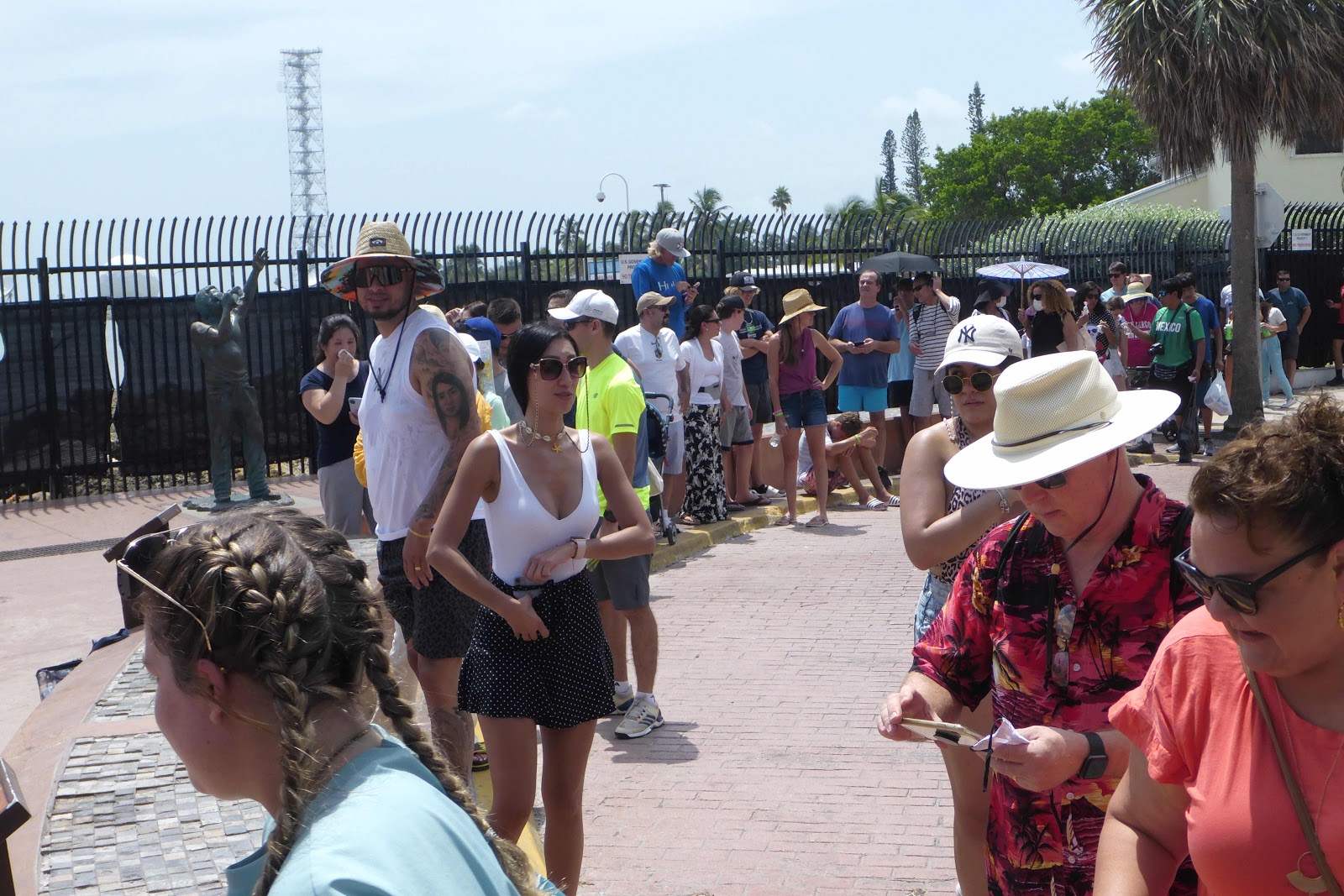 Look at them all milling around patiently in the sun which for them must be quite torrid and humidity-laced.  You can come by at four in the morning and be quite alone because they don't pack the monument up overnight and put it away. 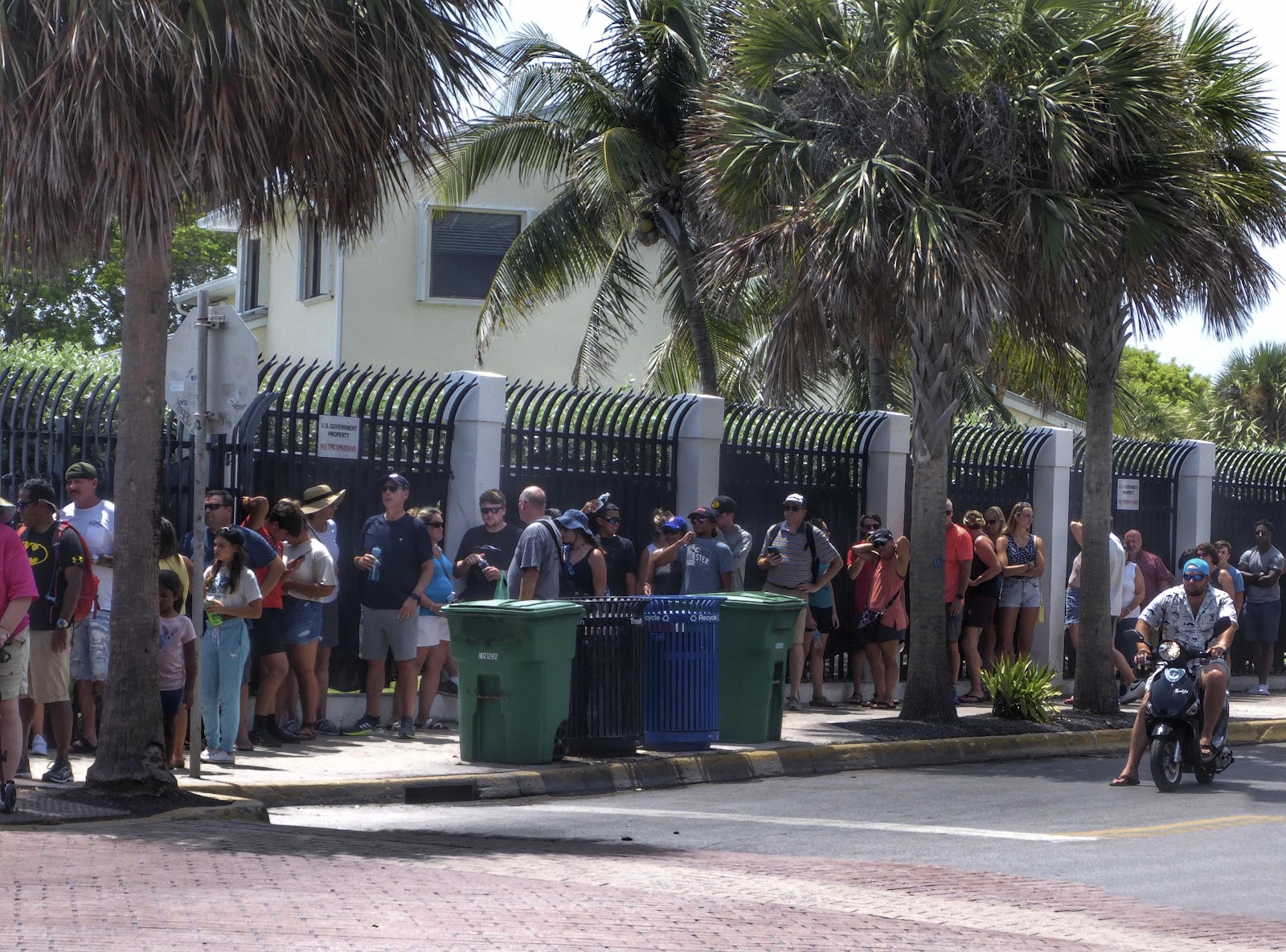 And then if you walk up South Street to get back to your toasty car you may find yourself passing the southernmost this and that. 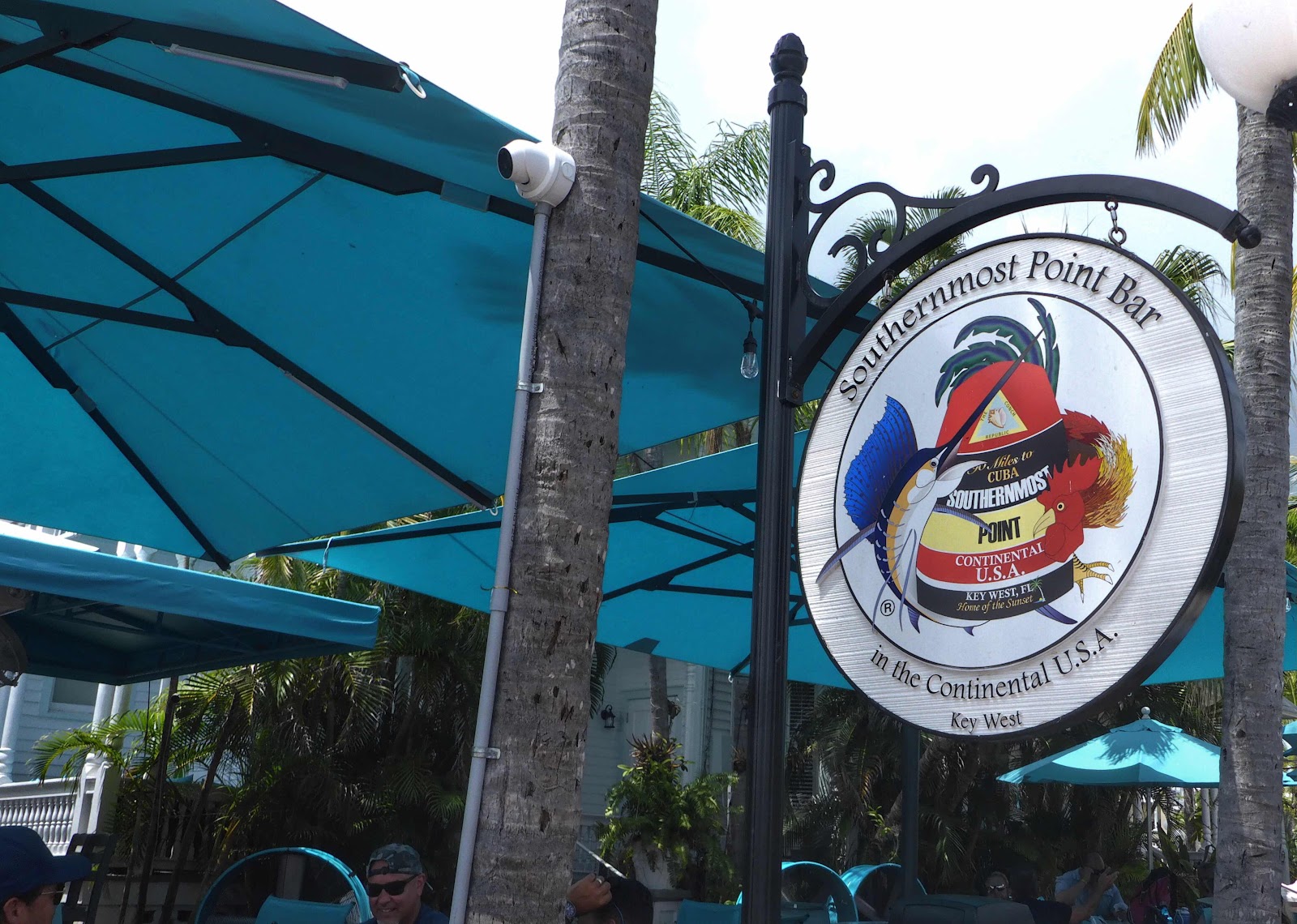 With a  convenient replica of the original and here, with some judicious editing you could pose here in the shade in front of the most desirable point. 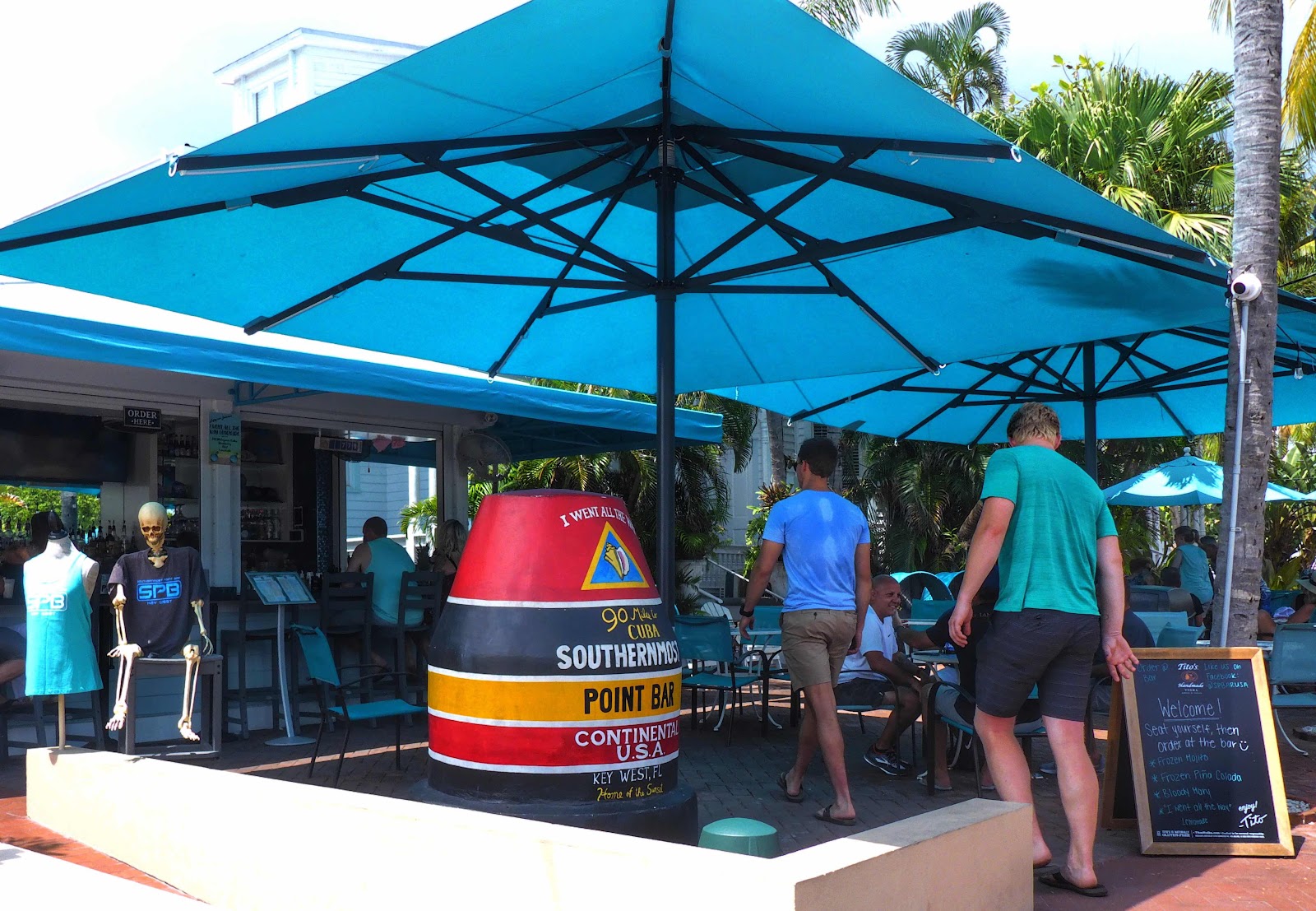 Or stop here half a block from the great point and have some refreshment as close to Cuba, the forbidden isle, as you can get. Finding oneself this close to Cuba is a great draw in some people's minds. 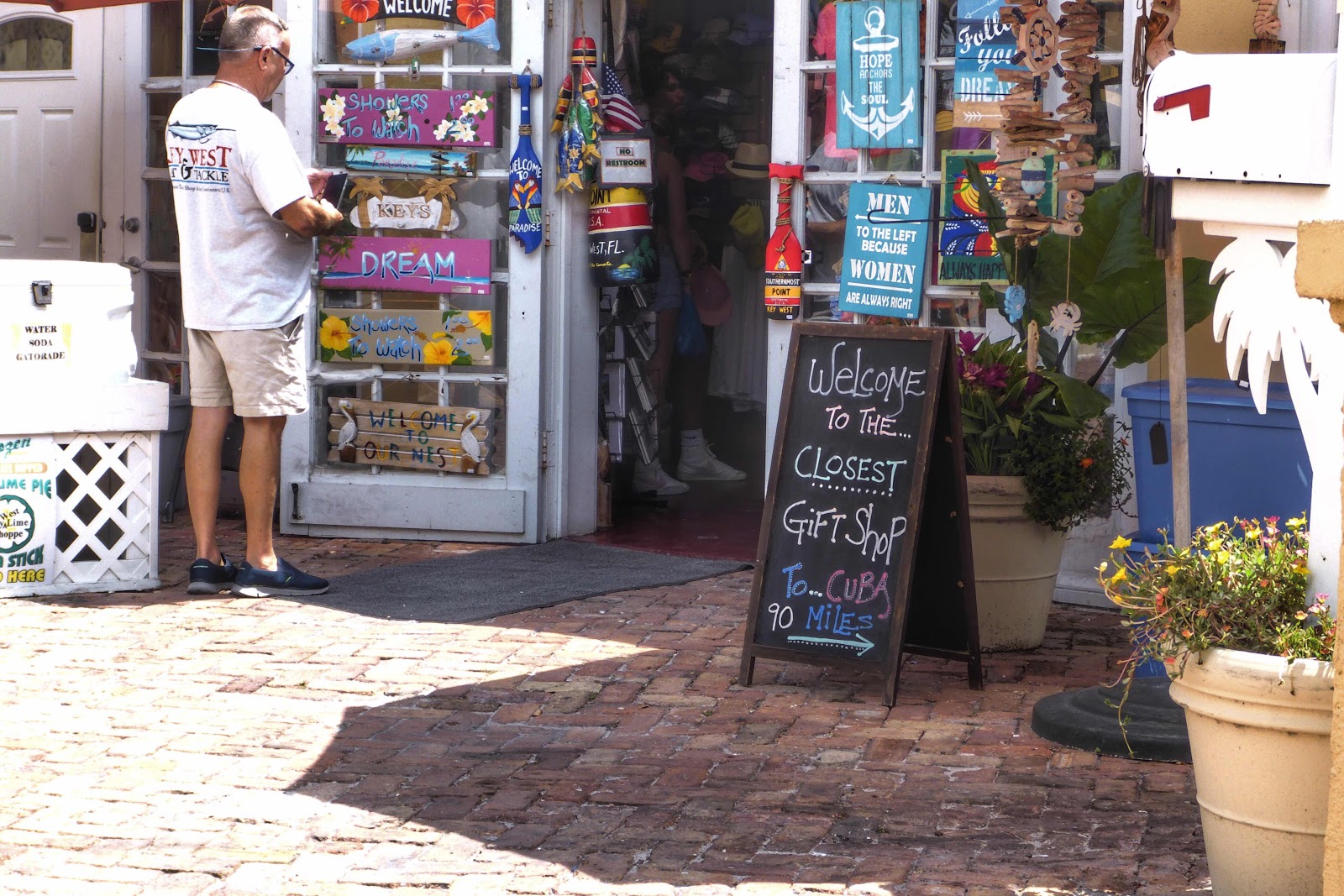 More southernmost stuff as you get close to Duval Street. I've been to El Paso and never noticed a business claiming to be the "closest whatever" to Mexico. But here, as remote and untouchable as Cuba is in reality, the draw of the pretend relationship is ever present. 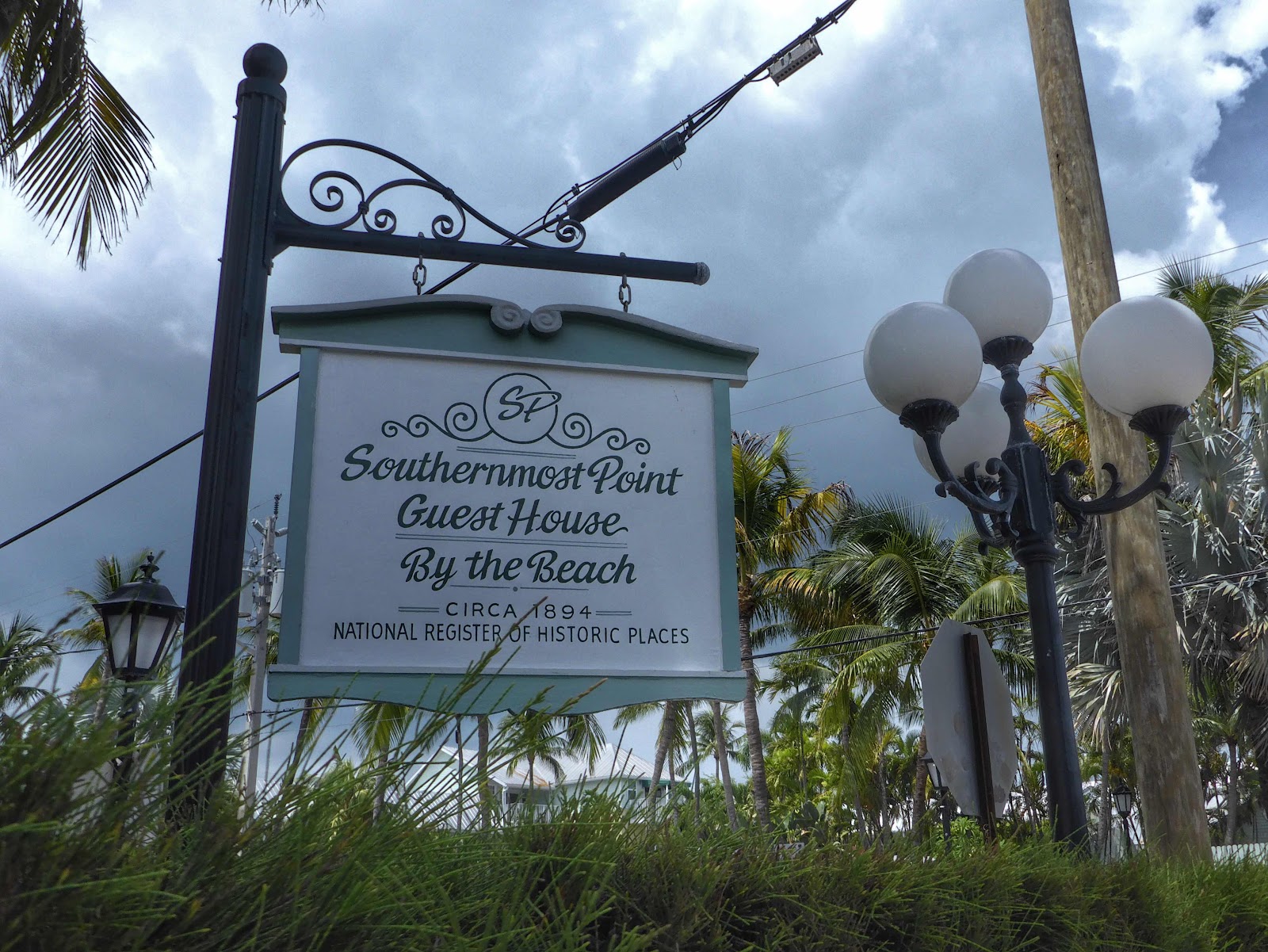 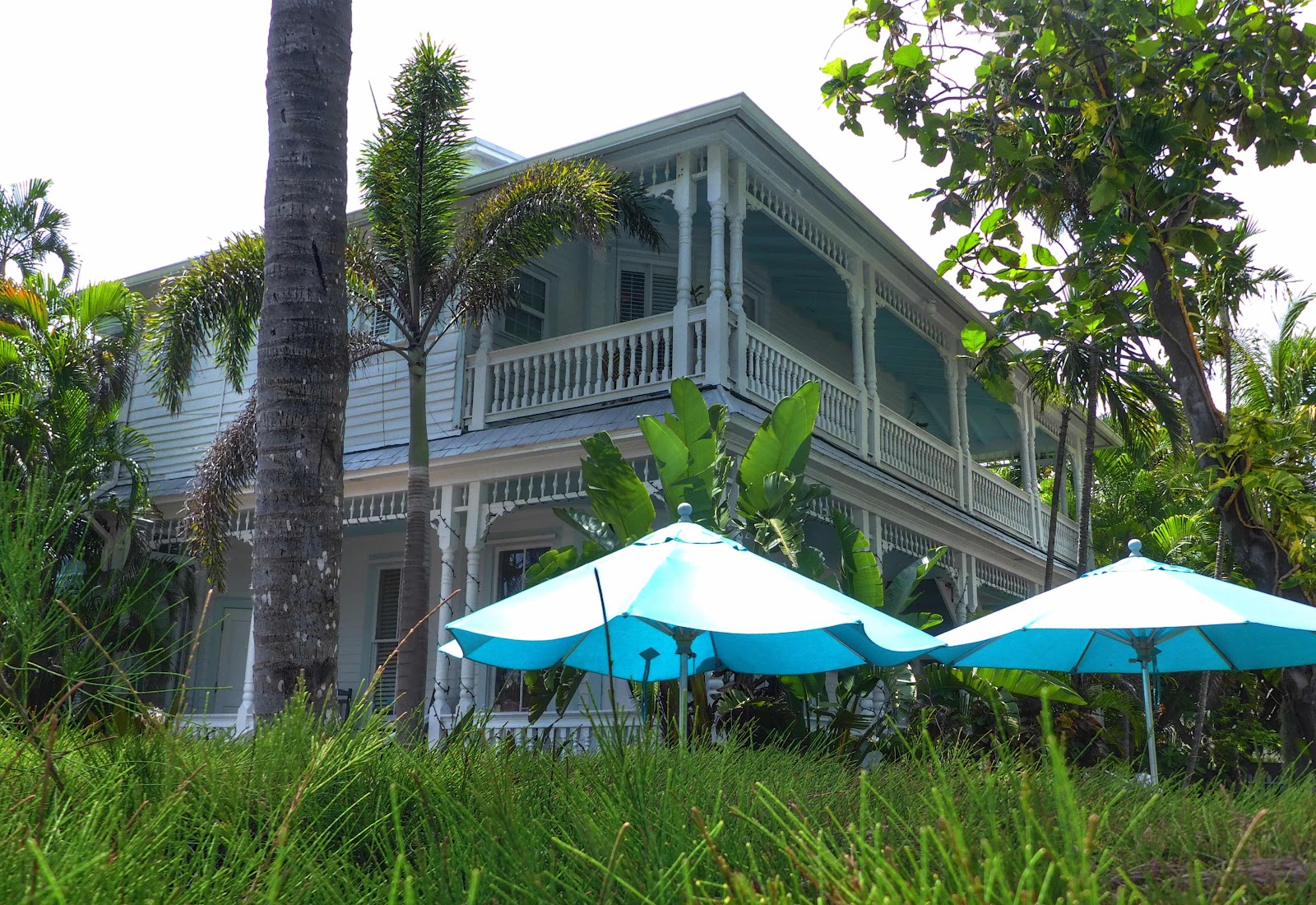 And this magnificent wedding cake is the Southernmost House, 1400 Duval Street.  You can pay to sleep and eat here if you like. However this too is not without controversy because the last house on the street, the one right next to the famous point has a sign on the entrance gate. 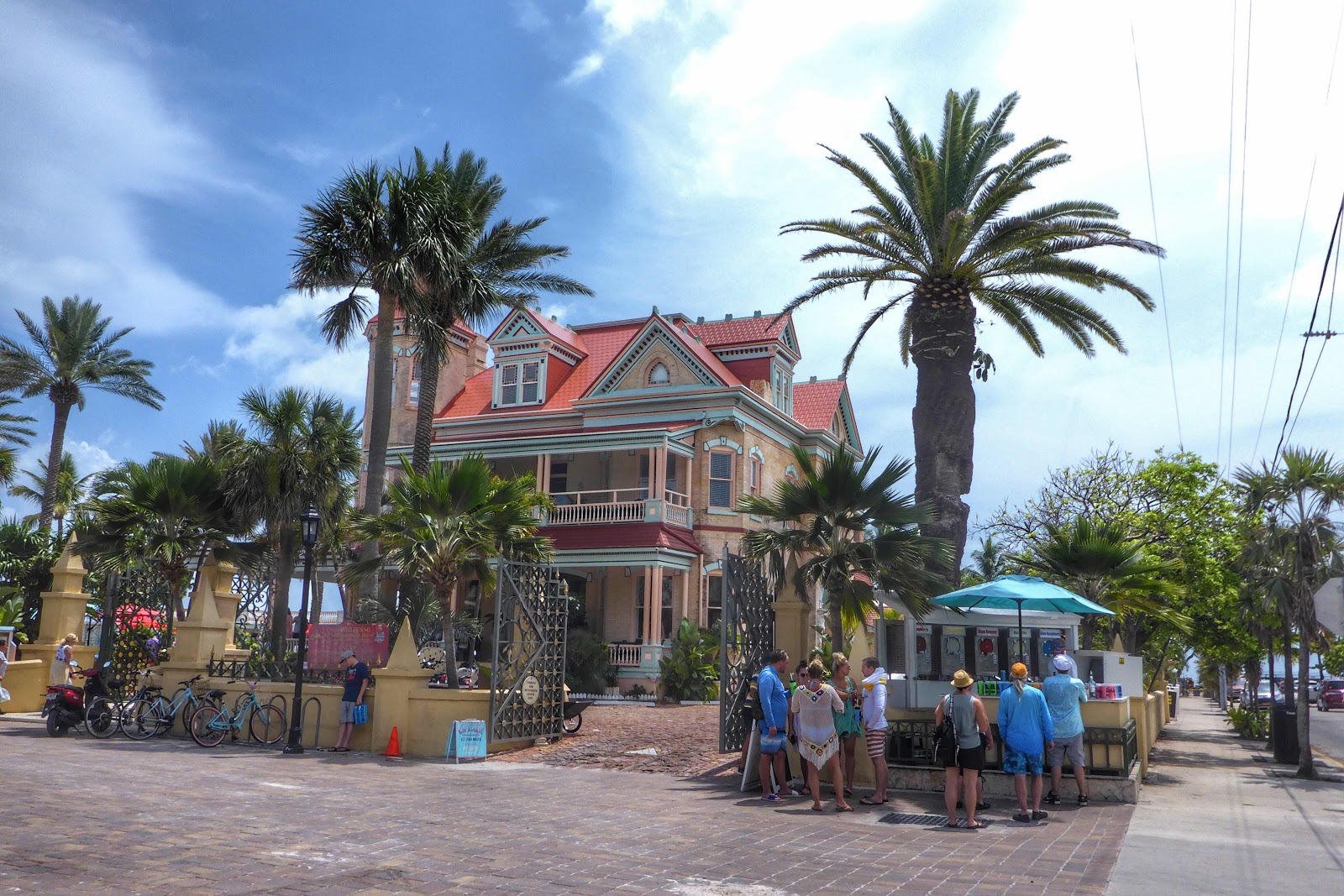 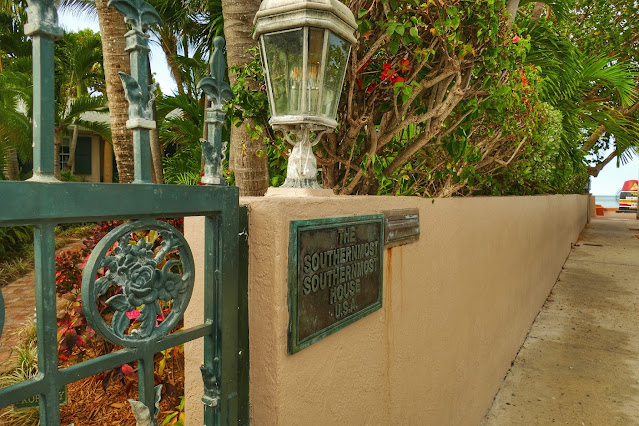 There is also a southernmost beach resort. This one is on the other side of Duval Street, not far from the southernmost ice cream store and surf shop as I recall. 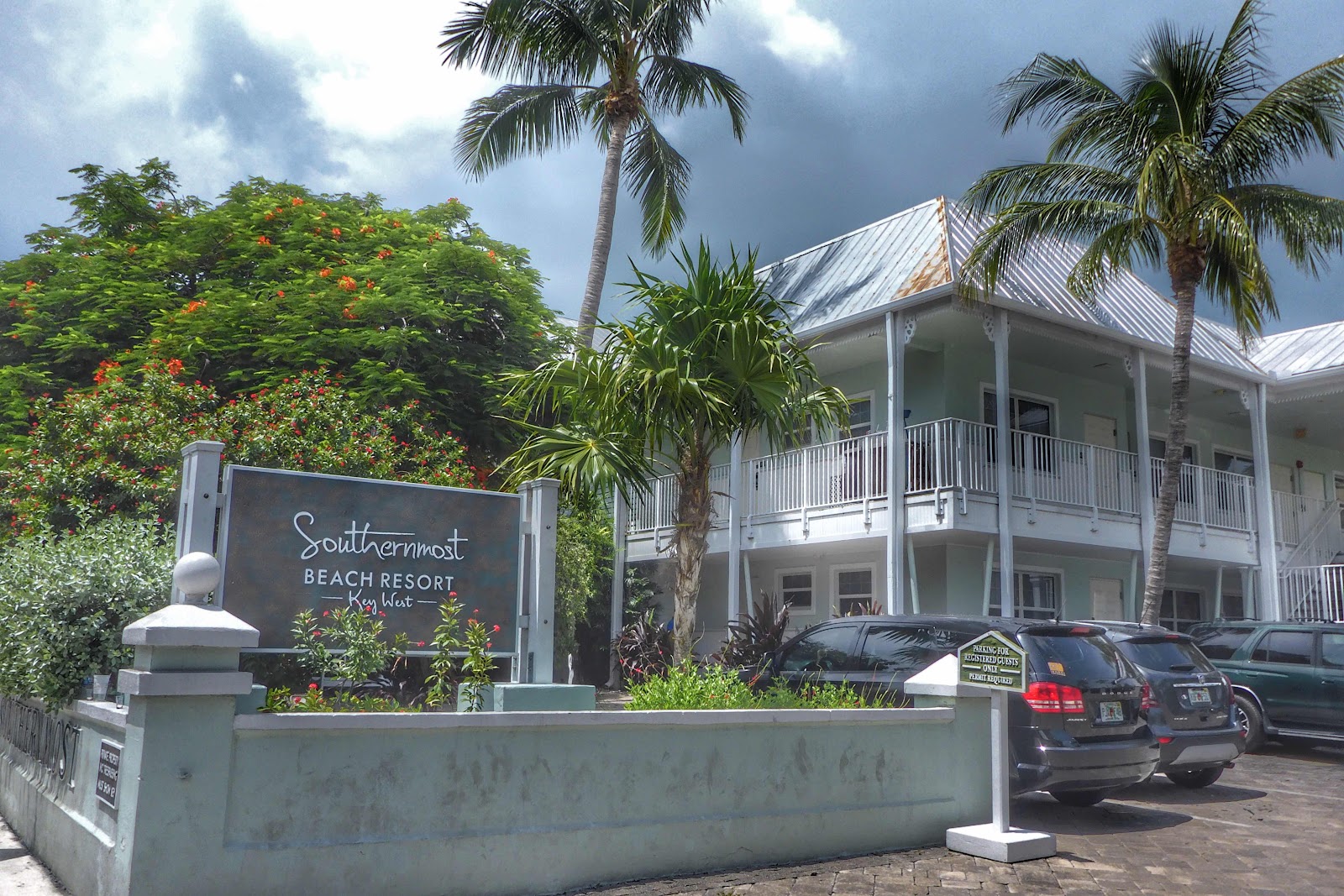 I am quite fond of Hawaii's southernmost point which you can like me, view on Google maps. It's a wooden sign in a muddy open space overlooking the water. But that fails to have as much appeal as the big red marker. My friends come for their pictures, including Bill who rode his scooter from Jacksonville: 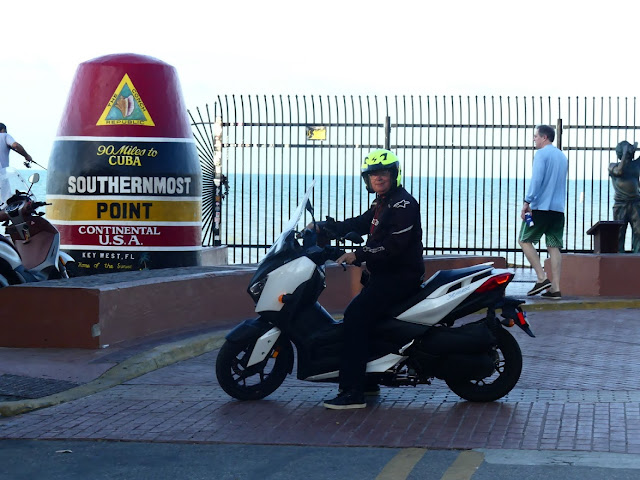 I stopped by on my first visit to Key West in 1981 on my then very modern Vespa P200 which then took me to Mexico and California: 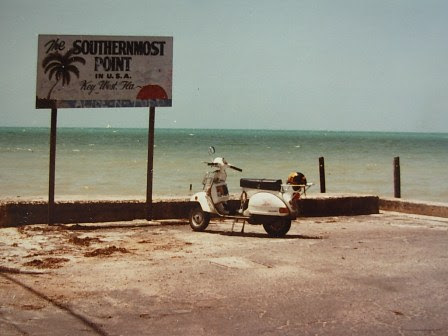 And as I was uncertain of the outcome of the impending Category Five hurricane I stopped by before Hurricane Irma in 2017. My Vespa S150 and I both survived in the police station during that Category Four catastrophe. 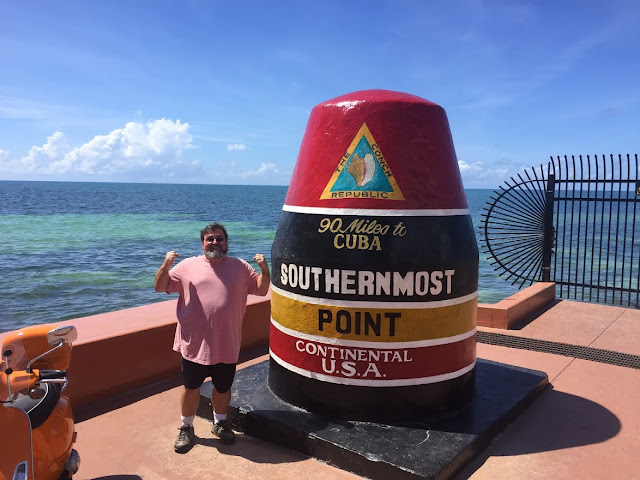 No one is immune to the draw of the mighty Southernmost Point!
Posted by Conchscooter at 12:00 AM 2 comments: