Before we left Terni my wife and I made photocopies of our Florida driver's licenses and left them with Giovanni, in the not unlikely event we had picked up some automated speeding fines while driving and riding around to hell and back in Italy, land of the accursed Autovelox.
"It's not the money," Giovanni said, though fines start at one hundred fifty Euros ($225), "It's the points on your driving license." Using our ids he hoped to deflect any eventual fines to his friends visiting from America, thus avoiding payment and points.

Almost all Italy's roads are now labelled as being under electronic surveillance. The law says local governments must give advance notice if they are using speed traps. The local governments in Italy are way too slick according to Giovanni, who likes to ride fast. "It wouldn't be so bad if they put the warning signs where they are supposed to be, before the radar camera, but in this country they put them everywhere so you have no idea where they are or aren't...And the old style gray boxes don't say what speed they are checking for. One just hopes they are turned off if you speed by too fast and in clear view, better to be overtaking at that moment!

Some of the newer Autovelox cameras are brightly colored and located in clear view in the middle of small villages and towns which I find entirely acceptable, as does Giovanni, who has paid a few Autovelox fines in the past few years. These newer machines also display flashing orange lights at night and some municipalities put them under street lights to make sure they are visible.

The actual functioning of the Autovelox is a bit mysterious, because even though they have little windows back and front and on the sides, it seems that the two windows facing the road measure the speed over a fixed distance, triggering the other windows to take a snap of the departing offending license plate.Riding without a tag can lead to permanent confiscation of the motorcycle.

The law says the authorities have 150 days to send out notices of fines but apparently the creaky functioning of Italian bureaucracy can lead to even lengthier delays. Which could be grounds for dismissal if the recipients but knew it. As it is the Autovelox was supposed to lower accidents; Giovanni says no such thing happened, his son the lawyer-in-training disagrees. The fixed radar camera was also supposed to free police and Carabinieri to carry out more DUI and roving vehicle stops but they are hardly in evidence.

The Autovelox and the similar overhead Tutor system on the freeways has actually turned out to be a tool for alienation, as they are seen as fine generating machines with no real role in reducing traffic wrecks. Appeals cost 40 Euros to file with no possibility of being awarded costs even if the citizen wins the case. All I know is they are a total pain in the arse especially as it is a lot of work to stop worrying about getting pulled over from behind by real people, as at home, and instead learning to look for a dinky little sign buried in the bushes by the side of the road. 150 to 90 KPH on a motorcycle in 30 feet is very hard on the testicles. An unintended consequence I'm sure.

Posted by Conchscooter at 4:25 PM 4 comments: Links to this post 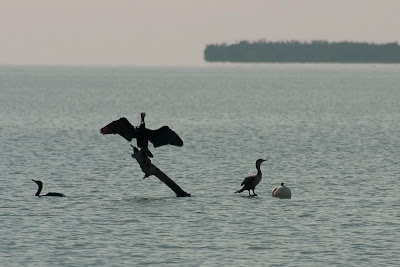 A cormorant drying it's wings by GarytheTourist.
Posted by Conchscooter at 4:01 PM No comments: Links to this post 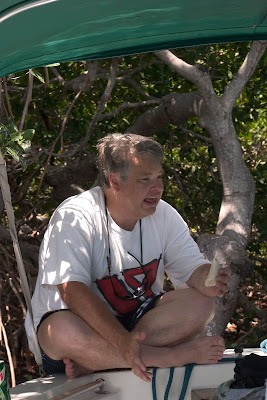 This photo amply illustrates my phobia about photographing people. Gary, the author of these pictures is actually well mannered mild and endowed with a sense of humor (I hope). However he was not caught at his best in this portrait enjoying a picnic lunch on the water, looking like he's delivering a stern lecture. Next week I'll be back but I am very grateful to GarytheTourist for letting me use his pictures while I was on vacation.
Cheers,
Conchscooter.
Posted by Conchscooter at 8:01 AM 1 comment: Links to this post

I have stood next to the 2711th Vespa ever built, one of the original series of 98cc Vespas built right after World War Two. Cool, huh?

How Giovanni's wife Rossana ever heard about thisplace, fa off the beaten track I have no idea, but she got us here in the middle of the region known as Le Marche, not far from the provincial capital of Le Marche. Te museum was open to then public and free, overseen by a young girl who had never even ridden a Vespa...

The were more Vespas and more Vespa "stuff" than I can possibly comment on. If you love Vespas as I do the pictures speak for themselves.

My first motorcycle in 1970 was a Vespa 50R like this one below which my mother bought me (she loved motorcycles!) when I was twelve. Mine was orange and had a double seat and no spare wheel. I rode it everywhere across the mountains even though I was two years younger than was legal. Hence my love of Vespas.

This fascinating collection was pulled together by one Marco Romiti a native of Pollenza, who it turns out still lives there. I know because we met him on the street after our stupendous visit.

There on the street we spoke of nostalgia and Piaggio's astonishing inability to take advantage of the tremendous well of good will, world wide, for Vespas old and new.

He told us Piaggio showed no interest at all in his fabulous collection and he is forced to keep it off the beaten path because no Piaggio affiliated organization will give it the audience it deserves. Italy snatching defeat as usual from the jaws of victory.

- Posted using BlogPress from my iPad
Posted by Conchscooter at 3:44 AM No comments: Links to this post 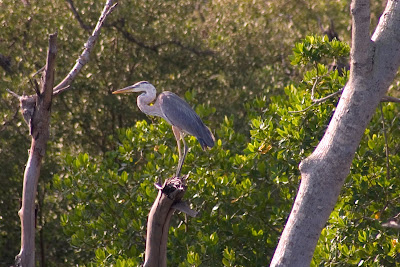 Photo By GarytheTourist. Concschooter returns in a week from vacation.
Posted by Conchscooter at 12:01 AM No comments: Links to this post