I had to get a ride across town to pick up my motorcycle and Eleonora was delegated to do the job, with her Vespa 150. You drive she said. No you drive I said and she was nothing loathe.

I must have looked like a circus bear perched on the back but the Vespa took off with a will across town. She sliced and diced the traffic mercilessly, cars gave way to the waif on the scooter and smart they were too as she wasn't stopping for anyone.

Eleonora is the youngest of Giovanni's two children, 16 and bright Asa button. She studies hard is self motivated and gets things done. All of which makes his father proud of course, but that she went off on her own to get her motorcycle license makes him proudest of all. It is the irony of genetics that his son, 24 and studying law in Rome, has no interest in motors at all. Giovanni practically had to get on his knees to get Michele to agree to buy a car, for the law student riding the train to and from Terni works just fine. He is not his father's son, clearly.

Elly is entirely at home in two wheels.

Her parents were discussing the fact that in a couple of years she will be eligible to move up from the 125cc category but Giovanni was adamant she isn't ever going to get a motorcycle.

Eleonora likes to get her way and my money is on her. I'm wondering who it is that makes a motorcycle strong enough to stand up to her iron will.
- Posted using BlogPress from my iPad

Posted by Conchscooter at 8:01 PM 3 comments: Links to this post 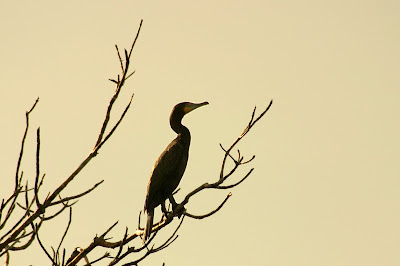 The cormorant, known to some rather derisively as a duck is actually a marvel of a bird. It can dive deep and at speed to catch it's lunch from the air. It isn't well equipped with oils to allow it to dive but that in turn requires it to dry out its feathers which is why you will see them sitting on posts and markers over the water spreading their wings in adoration of the sun. Photo by GarytheTourist who is letting me use his pictures while I'm on vacation spreading my wings.
Posted by Conchscooter at 4:01 PM No comments: Links to this post

Italians call it simply The Big Stone (sasso means literally stone) and when you show up at this National Park on your BMW you are in Colorado/Italy all of a sudden.

I have to confess the R1200 ST is my kind of motorcycle and I'm really enjoying riding it. It's powerful but not crazy with a decent gearbox and ABS brakes of which I am still not too fond. I just don't like feeling the brake pedal push up against my foot when the bike decides it's time. The riding position isn't too low, the bike feels light and easy to throw through the corners and the engine though powerful vibrates enough to let you know it's alive and still requires some swift gear changes to get the best out of the torque curve. All in all enormous fun and confidence building unlike the 170 Hp four cylinder monsters I've rented in the past.

The Gran Sasso tour was a blast, and we were at 5,000 feet on one of the hottest days of the year. which was all to the good though the sun was fierce and we got home looking like seasoned sailors.

The Gran Sasso is a gigantic peak, 10,000 feet tall in the Apennine mountains in Abruzzi. It's most recent claim to fame is the severe earthquake damage caused to the city of L'Aquila (The Eagle) and which has left the center of the city in ruins. As a result traffic winding through the suburbs was horrendous even on a Monday.

But beyond city limits the traffic melted away and you could count the number of cars on the road through the park on two hands. Some of the park roads were in not too bad shape some of them were awful with potholes cow pats and some sort of corrugated surface that attempted to crush my testicles on the fuel tank and rearrange my internal organs as I rode. Some of the road across the Piano Imperatore (The Emperor's Plain) was fantastic and straight and allowed speeds to 85 mph which created a nice cool breeze.

My wife rode with Giovanni on his R1200RT which is the touring model and thus more comfortable for the pillion, while I rode solo on the sport
"She never complains does she?" Giovanni said of his passenger, this from a man married to a high maintenance Italian Princess. He rides hard and fast and carrying a passenger evened the odds a bit for me who knew neither my motorcycle very well nor our roads at all and thus struggled to keep ahead of the dynamic duo.

On the main highway our top speed was 180kph/110mph but on the smaller roads passing is the trick to keeping up speed and through it all, passing on humps, across double lines between passed and oncoming cars she kept on grinning. She was not grinning when we reached Albergo Imperatore at the top of the park.

The ugly red lump of a hotel was closed, the bar was closed, the TOILETS were closed, the lady selling beer and sandwiches looked glum and said she was sorry. The parking lot was full of cars and there wasn't even a bench to sit on. The place looked like a dump.

This set Giovanni off on a rant about Italian inefficiency, the gruesome nature of every single person he's ever met from the Abruzzo region, their inability to help themselves and what the fuck, he needed to pee too, damnit. We tried to make a plan away from the wreck of the hotel.

We retreated down to the Piano Imperatore (the Emperor's Plain) where I nearly ran over a shepherd's. White dog lightly disguised as a rock.

The views were tremendous

But we needed a bathroom. Urgently. And then lunch, less urgently. We found a bizarre do it yourself barbecue joint at a cross roads.

Mercifully they had a clean toilet with paper and a basin but where we would have had to buy raw meat...

Then stick it on a grill set on fire by men with very loud hissing propane blow torches.

The guy above put his meat on the grill and the guy below heated the charcoal. Weird so we passed on the notion of having lunch at this place.

But none of it was as weird as seeing this fashion disaster:

And those were not my feet.
More to come as the ride continues in Part Two.


- Posted using BlogPress from my iPad
Posted by Conchscooter at 3:35 PM 2 comments: Links to this post 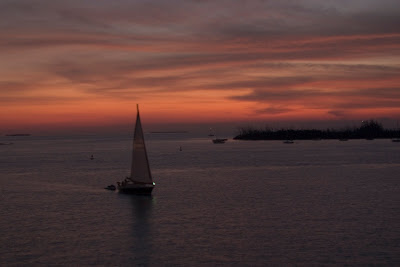 Sailing home by GarytheTourist, filling in while I'm on vacation. Wisteria Island, known locally as Christmas Tree Island for the Australian pines that grow there, is in the background. The putative owner has suggested putting 85 homes on the undeveloped island. According to a story broken by the Blue Paper the US Navy may reassert some long buried jurisdiction on those development plans. There are so many weird things about Key West, not least who owns the dirt!
Posted by Conchscooter at 4:01 AM No comments: Links to this post

NB: I have been away from wif-fi access for some considerable time and this essay among others has been waiting impatiently in storage in my iPad's excellent Blog Press program... I am fully recovered and riding as much as I can.

The's nothing quite so humbling as having a motorcycle at your disposal, lots of mountain roads to ride...

As I was getting sick I borrowed giovannis. Car to take Layne to visit her college friend in Tuscany, Therese flew from Paris to Pisa for the weekend and I ended up driving them across Tuscany for a quick tour of mountain towns, Volterra above, Tuscan fields below just like you see it in the movies.

By the time I got back to Terni I was not well but I had the motorcycle and I had a date with my sister for lunch at her mountain home and off I went bound and determined to make it through the day. Besides I really wanted to try out the R1200ST I have for the next two weeks...

Off I went feeling no better such that by the time I got to my sister's house I was exhausted and could do no more than lay on the couch and nap. Giovanni cam up to rescue me and take me back to the big city. I rode with his wife in her car, like the invalid I was while he had the pleasure of riding the BMW home. I was jealous but all I could do was take pictures.

My wife came home from. Siena by train, I am filled with antibiotics, anticipating a return to health but at last I have found an Internet connection so I have all the tools for recovery. The weight loss I hope will be temporary.

Posted by Conchscooter at 3:32 AM 2 comments: Links to this post 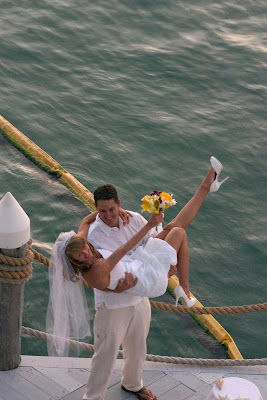 The joy of marriage in Key West, by GarytheTourist, whose pictures are very kindly filling in for mine while I'm away on vacation. People love to come to Key West to get married, something I never remotely considered myself 18 years ago and my wife never brought it up.
Posted by Conchscooter at 12:01 AM No comments: Links to this post