Joe And The Road King

Key West is a destination by virtue of the fact that it is the end of the road. Frequently I read about riders who come to town, take a picture at the Southernmost Point and call it good. They ride out of town thinking they've "seen" Key West and from there they go off to pick up their next badge destination. Then there's Joe from Fairbanks Alaska. 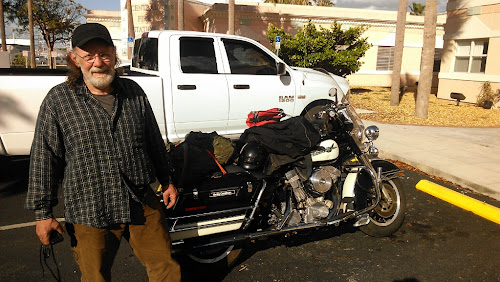 When I pulled into the parking lot at work I saw my sergeant signing off some papers for rider so I parked the Bonneville and walked over. Having done my own Iron Butt rides I knew what my sergeant was doing, certifying that The Harley Rider with the Alaska plate actually did start his ride in Key West. Sergeant Biskup has his own Road King but he thinks I'm crazy for enjoying my long distance rides on my pansy Bonneville so what he thought of Joe preparing to ride his new-to-him 1996 Road King back to Fairbanks, that I'm not sure. Joe's phone battery was flat some offered to take him upstairs so he could charge it. 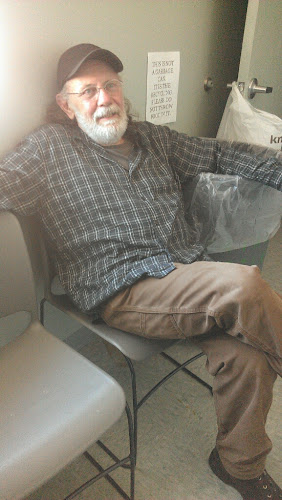 We talked for a while as I had arrived at work early and I had some time in had. Joe said he flew to Fort Lauderdale to pick up the bike, and was going to ride it to see his Mom in Connecticut, the head to New Mexico to see a friend and the ride north...He doesn't come to "The States" too often so he wanted to take advantage of this trip to see some people. He hadn't slept in 24 hours and he was operating on adrenaline. I know that feeling so I took advantage of his excitement to let him talk about his life a bit. 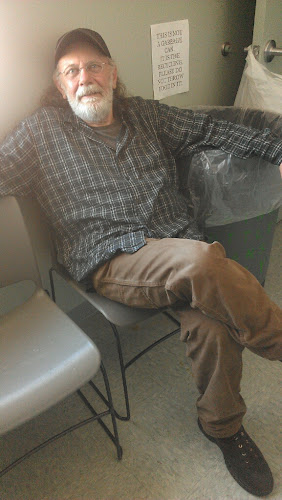 30 years in Alaska sounded rugged to me, a cabin on a lake far from any road, snow, wilderness, a wife, a job with an open ended return date -"the trip takes as long as it takes, I told them"- all amounts to stories of the sort of wild frontier life we hear about but don't quite believe when we live in the pantywaist Lower 48. I told Joe I would not like to ride in fifty degrees and rain so it's unlikely I'd ever ride to The Last Frontier and he giggled and said he doubted I'd much like Alaska. I took some comfort from his complaints about how hot Key West was on a pleasant breezy sunny afternoon. Perfect weather I thought to myself. 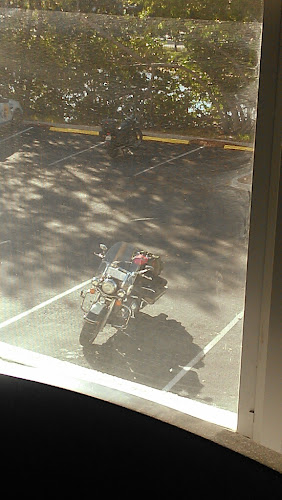 I gave him the best directions I could to a cheap motel and cheap eats in Big Pine Key. He'd had enough of the big Southernmost City and was itching to be back on the road with his new bike riding the mangrove wilderness. I wished I could have done more but I had some phone calls to take and work called. He phoned his 91 year old mother who is as active and independent as ever he says, and then with his phone charged he disappeared out of my life forever. One more Southernmost encounter. 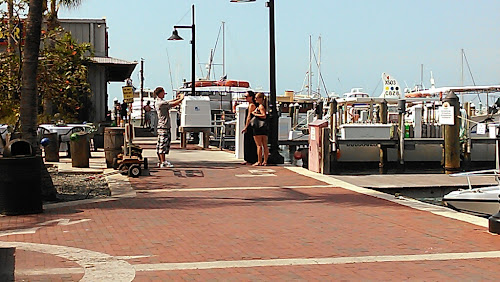 Everyone needs a souvenir of their trip to Key West. We are between tourist ugh seasons right now, with the winter visitors gone and the summer families not here yet, so right now you can hear people with odd foreign accents walking around admiring our fair city. Mostly they're Germans, the only people it seems across the pond who aren't yet facing bankruptcy. When their turn comes I wonder who will visit in the off season. 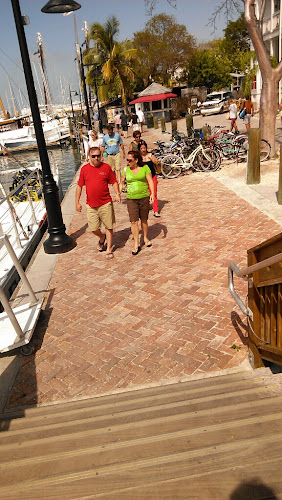 Key West is an amazing town, always finding a way to sell itself, and after going bankrupt in the Great Depression never forgetting tourism is literally it's life blood. 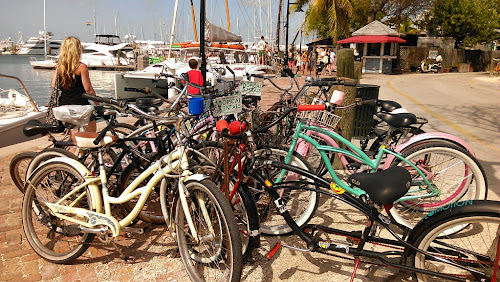 A bight in nautical language is a loop of room or an indentation in a coastline such that boats might take refuge there. The Key West Bight used to be home to commercial boats, first traders then shrimpers and now tour boats. Fascinating stuff for some little visitors: 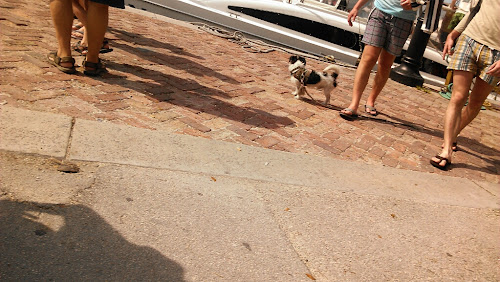 In order to draw more visitors there is a plan, outlined in the newspaper to hold a tall ship regatta and the organizers had to go public in order to ask for a reduced docking rate to help it get off the ground. Better that than more cruises ships and sailing boats do actually have something to do with Key West's history. 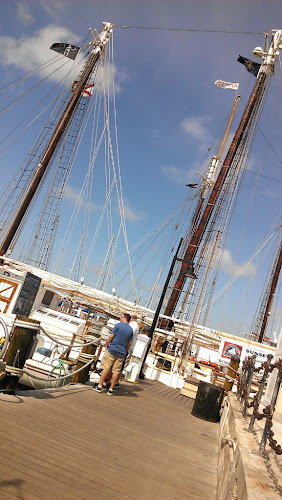 Schooner Wharf has rebuilt the old bit that got burned and is now open for extra waterfront business. 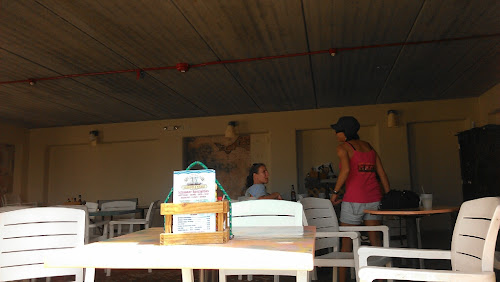 I cannot say I find the extension attractive or thoughtfully done but I expect it will blend in nicely with the hotel that is to be built on the open space next door. It certainly doesn't look like it belongs to the waterfront funk of "the last little bit of old Key West." 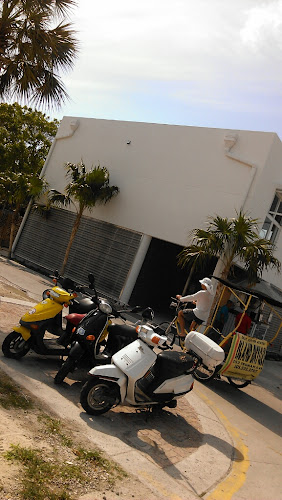 This part of the world is going to undergo refurbishment by the city to please the hotel development so things will look quite different quite soon. Gentrification moves apace! 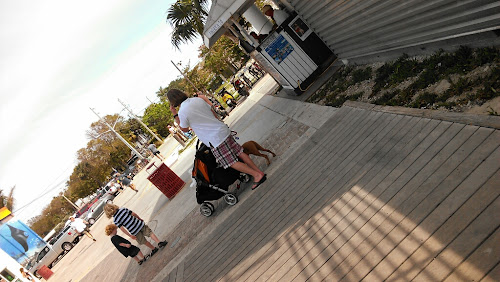 But no doubt it will draw people and bicycles and money and those who grumble about bike paths and flower beds and turning circles will get used to the changes in time and then grumbling will turn to other changes planned. 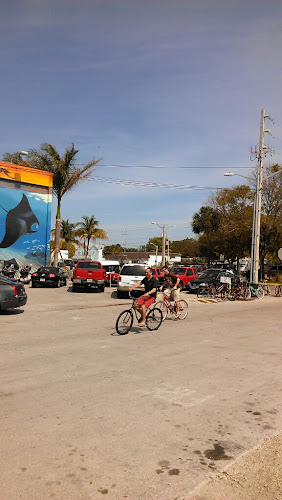 Change is exemplified by the waterfront market building, supposedly going to become a pub. All part of change that will improve our quality of life, they say. I'll be back to take more pictures as it goes, then I'll look back at these pictures and remember how it was in the "good old days." Harrumph.