We march to the tune of a different drummer in North America where the US and Canada as well as border states in Mexico switched to winter time last night. Other northern hemisphere nations and the rest of Mexico switched on October 29th.  I am actually fond of daylight savings time and despite some inconvenience caused by dark mornings I wouldn't mind keeping it year round. 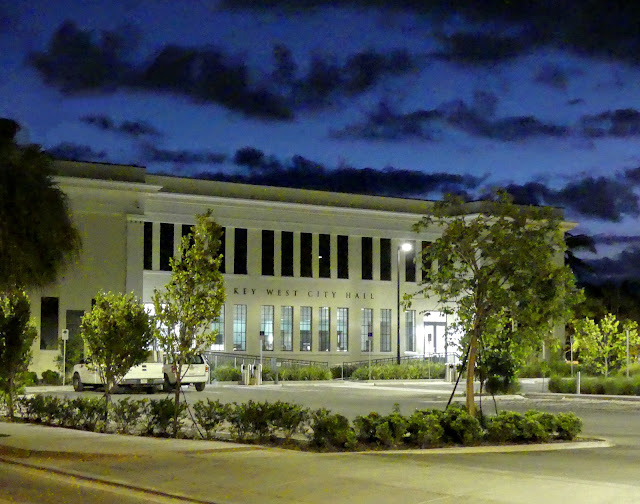 Young Rusty, seen here at the courtyard of the new city hall helping me take a break in our breakneck walk, finds the dark mornings inconvenient because I can't see to walk the mangrove trails in the dark. So we either wait till seven, and he's impatient, or we walk where there is a clear rail and maybe a street light to help us on our way. 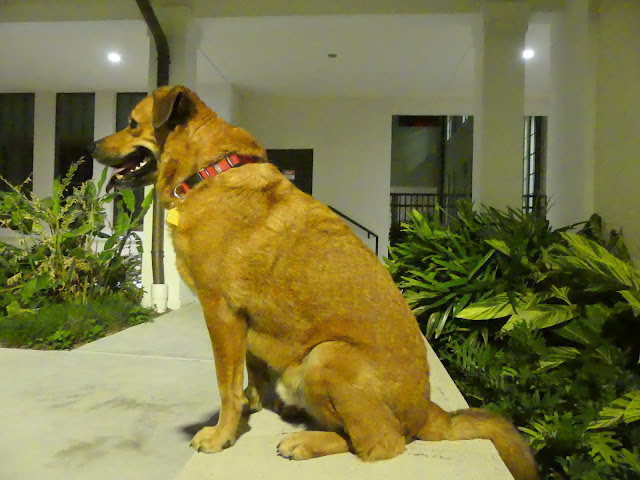 It was about seven in the morning when we stopped at the city hall rest area and a city employee I know popped out to have a chat as she was early for her work. The conversation soon turned to the storm and she had some hair raising stories about her neighborhood on Big Pine Key at the heart of Hurricane Irma's destructive sweep. Her car flooded and two unoccupied houses across the street caught fire and went up in blaze as swift and powerful as an oversize firework. She and her cats couldn't escape as the car wasn't working. They had no water ( for two weeks) and no electricity for longer than that. She still has no Internet or cable TV and when she gets home she has no distractions to take her mind off the stress of work and living in a trashed neighborhood.  It's the kind of thing you don't hear much about in the drive to make Key West tourist friendly, but those lives are being lived out there. 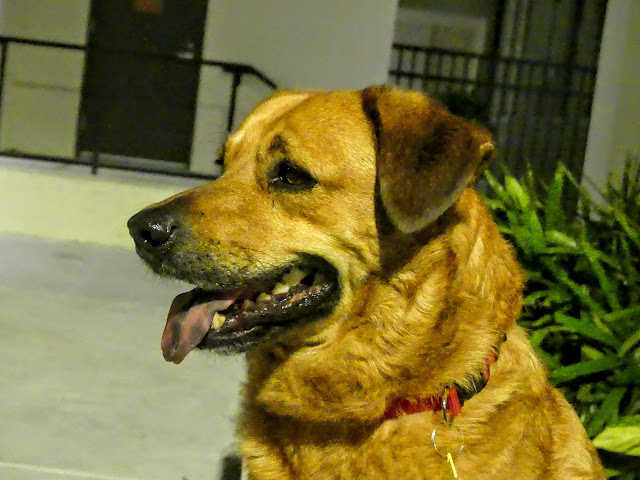 We set off for the car which I had left at the police station half a dozen blocks away. As we passed the welded steel tiger I couldn't resist juxtaposing my little brown tiger with the fierce  big one on guard at its street corner: 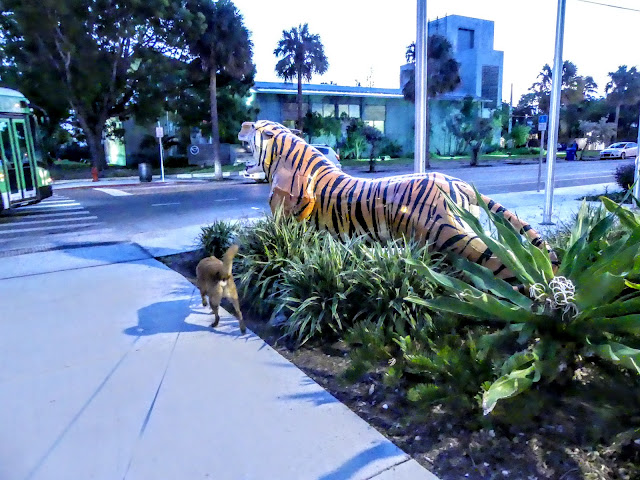 It was actually the mascot of the school that used to occupy the space which is currently city hall and it was welded as I recall by an instructor at the school. Naturally a whole boatload of people had an opinion about the refurbished tiger being located back at its old spot and all sorts of proposals were put forward. Some wanted it at Horace O'Bryant School, others said the Montessori School would be suitable and yet more thought  other spots entirely. After the dust settled the tiger was put back in the spot it has occupied for forty years and that seems to be that. Finally. 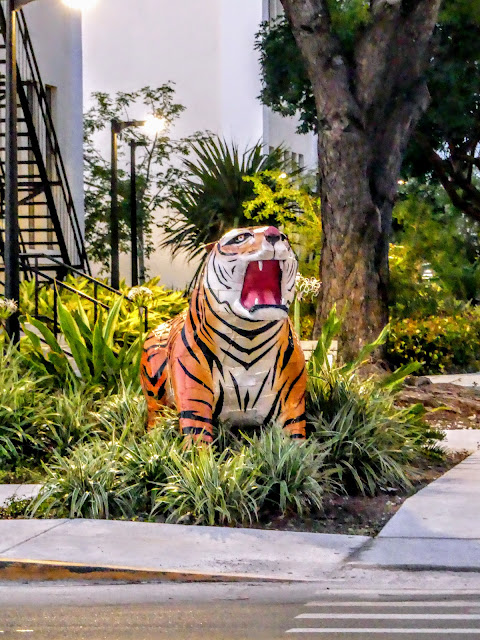 I was strolling a way up United Street and I was struck as I cross White Street what an iconic moment I was missing. That wait for a hot cup of Cuban coffee, Key West's favorite way to greet the day. 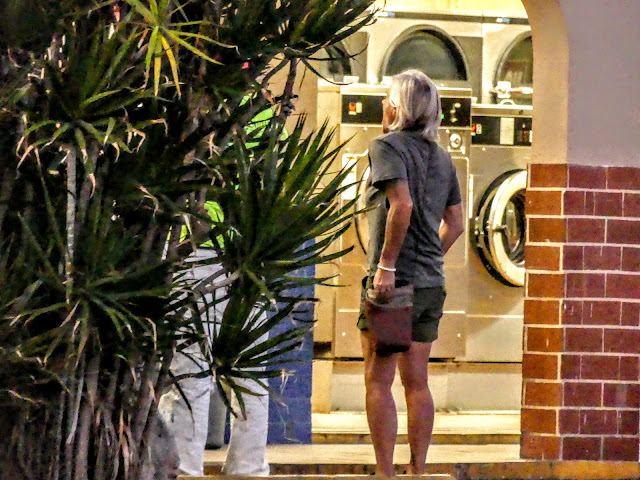 I did not do a good job as Rusty scampered and I was in the wrong spot and there it is. The frustration of combining dog walking with photography. I am grateful to Rusty for getting me out of my comfortable house but slow meditative picture taking is rarely on the cards for me. 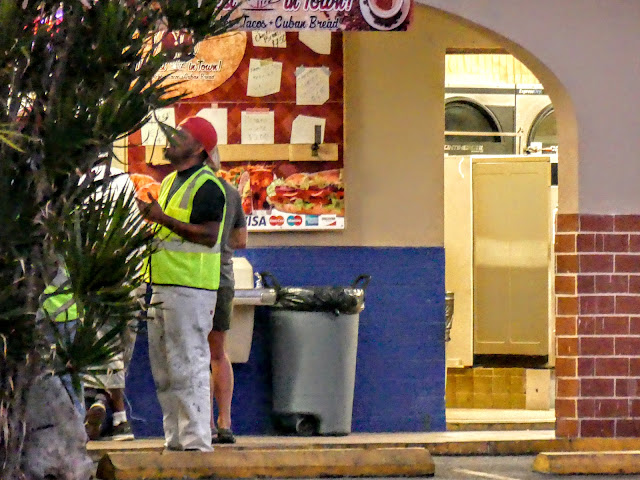 This building, below, has a bit of history.  Bruce Hall was part of the Navy hospital complex in the world war years and was later turned into a commissary and now is used as a maintenance facility for the schools. Read about it HERE...Looking at the building I set to wondering how exactly it is that Key West is such a big Navy town and you would hardly know it walking around. There are actually seven bases scattered throughout the area but unlike say 50 years ago you hardly ever see anyone actually in uniform walking the streets. I don't mean that as a good thing or a bad thing, its just that things have changed I guess, in modern garrison towns. 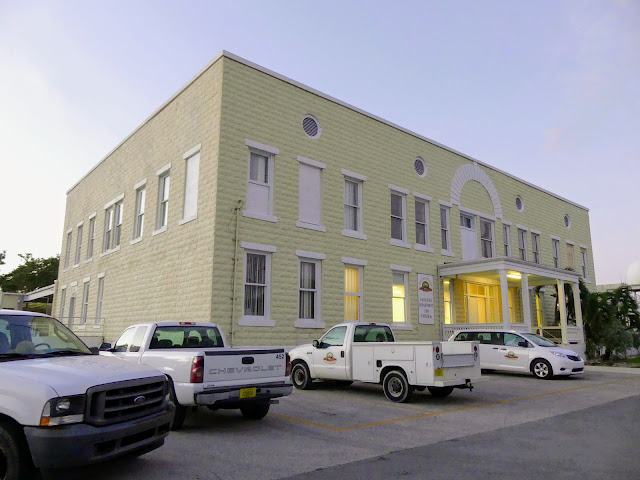 From the Historic Marker tour linked above:

Bruce Hall was the third building in the educational complex at Ruth Hargrove Seminary. In 1889 Bishop Warren Candler of the Methodist Episcopal Church South, representing the Woman’s Board of Home Mission established a committee of seven prominent local businessmen to establish a seminary of learning in Key West.
The seminary began in a modest way in rented buildings while the committee raised money and secured a suitable site for their new institution. The first building purchased for the seminary was completed in 1901and was located on the corner of United and White Streets. The structure was a large colonial frame building with recital rooms, dormitories and living quarters for the faculty. It stood where the national weather station stands today.
Bruce Hall was built in 1911. It featured exterior walls of “Indian block”, a solid concrete block that was considered to be “fire proof” at the turn of the nineteenth century. The architectural style and use of building materials is very similar to the large cigar factories of the day.
Posted by Conchscooter at 12:00 AM No comments: