Fantasy Fest in Key West is  a pain, from the perspective of one who has no interest in wearing a costume or bringing out his inner female by  cross dressing for a night.  On the other hand the ability of my neighbors and their friends to fill a town with people who revel in throwing off the restraints of moderation is in equal parts repulsive and fascinating. Fantasy Fest is, in short a like/hate relationship for me. I like getting the chance to walk Duval Street and check out the madness, partly because I don't have to deal with the crazies when I go home and partly because it is just one week out of 52. How often do you get to see a man strutting around main street wearing a three foot long palm penis? Hate because I'm not sure Michael Beaudet's display is something one can entirely  like... 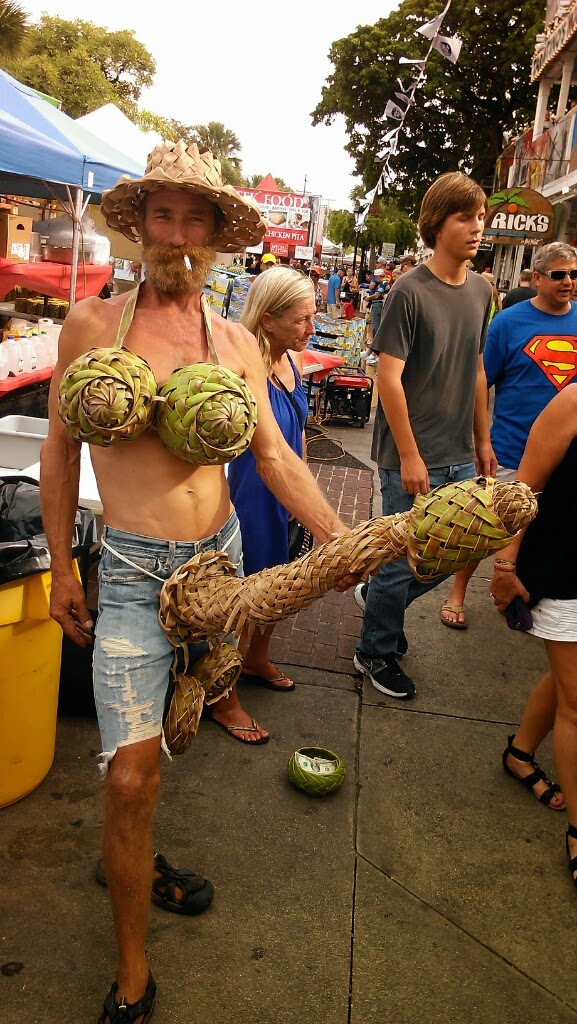 Living as I do out of town most of the hassle of Fantasy Fest comes from seeing my main road clogged with people falling over themselves to get to a town where they figure anything goes for once in their lives (it doesn't  really). I don't have to live with the down side of loud parties at all hours in rental homes, drunks in the street passing out on sidewalks and porches. I don't have to listen to couples fighting or sliding to the ground in garbage strewn streets. I don't make enough money in overtime to make the pain of the intoxicated crowds worthwhile. But walking across the parking lot to work one gets  a break in the routine when meeting this apparition: 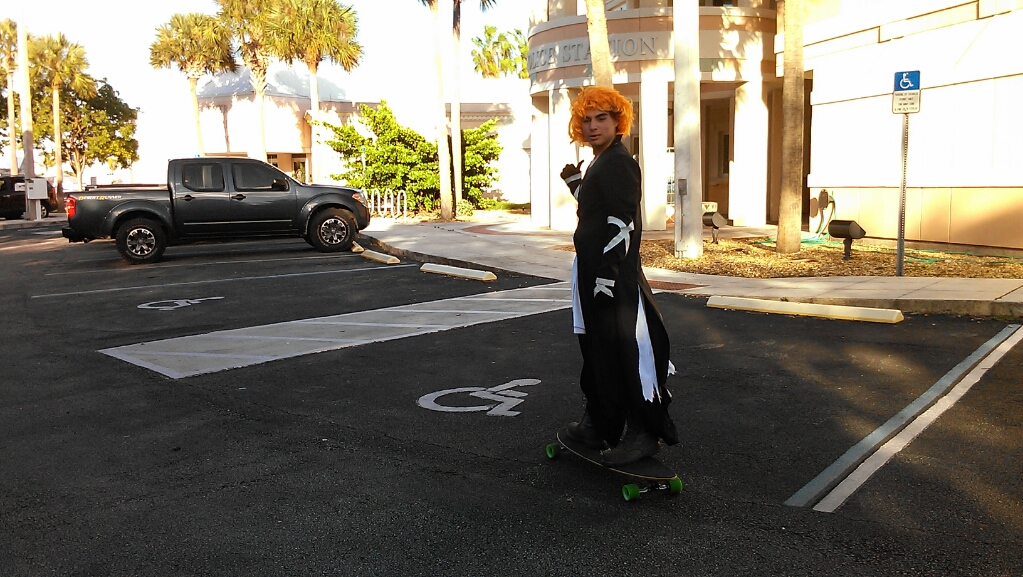 So when the opportunity arises, for an hour or two one can admire the effrontery and stupidity from the sidelines. Yes, it's tasteless, but sometimes in the middle of the dreck there is something that makes you laugh or tickles your imagination. Besides even if I were to decree an end to Fantasy Fest by powers not yet granted to me I doubt the bad taste money making would stop. Fantasy Fest was dreamed up as a way to encourage people to come to town, and it still is today no matter what they tell you about it's charity work or other good deeds. So between my shifts at work Cheyenne and I ventured forth from time to time in the dark after the bars had closed, long after the strutting in front of Rick's  was over for the night. A different world, and thus Labrador friendly: 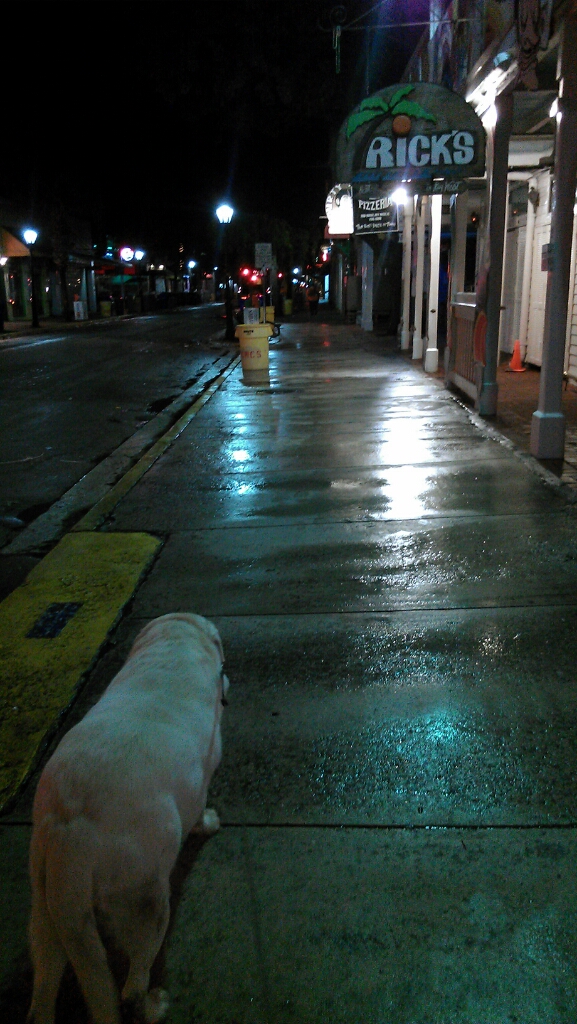 This year my modest outings were curtailed, the Pet Parade which I stuck high on my calendar got washed out, as was my sole opportunity to wander downtown and just look at the madness on Duval.  And I forgot the Kids Party at Bayview Park on Sunday. Rats! The ambivalence of my feelings about Fantasy Fest stem in large part from the ambivalence in Key West. It's fashionable to hate the holiday as a tasteless intrusion into city life, a nasty but necessary financial boost in a tourist town slumped in ultra low tourist season; that yes, but a pleasant outing? Never ! Shudder! And yet I find amusement in it. 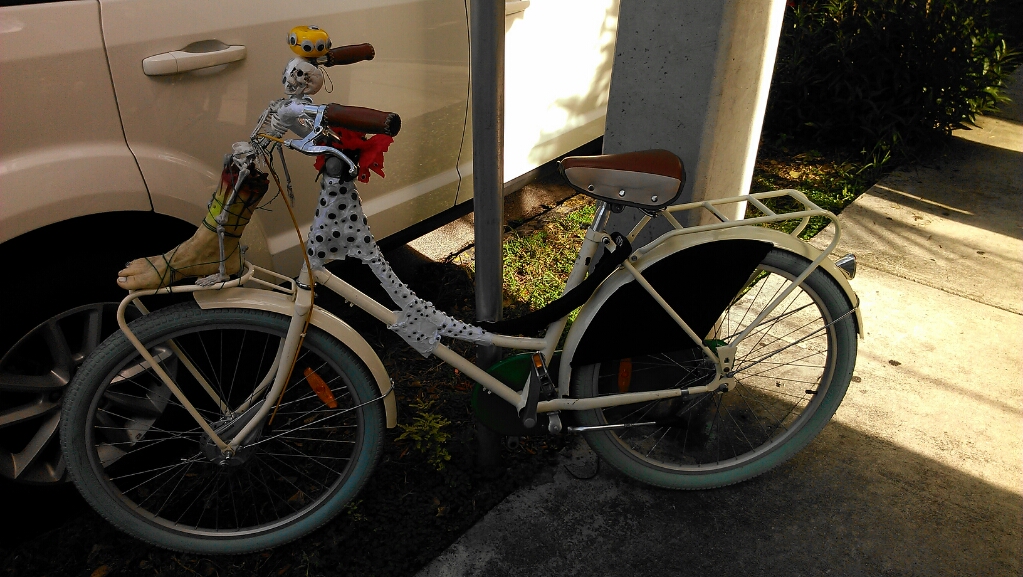 Snotty  locals like to mock the visitors who come and do here what they can't do at home: let their hair down, get drunk in public and be a little bit shameless. I feel bad for them inasmuch as they clearly live the kinds of lives of quiet desperation the poet wrote about, the life that doesn't gain any relief except far from home, far from neighbors and judgement and negativity. And then in Key West the demand is for only beautiful young people to reveal themselves, to take a chance (no chance at all really) and the judging and grimacing starts up again on the shapeless pasty middle aged white people from Up North. An acquaintance watching the crowds pressing against the barricades alongside the grand parade shook her head recalling all the "perverts" in town. She looked slightly concerned when I shrugged and said I thought they were just seeking out some fun. Despite her disapproval I do think the term pervert is a bit silly. Pervert? With a smile like that? Come on... 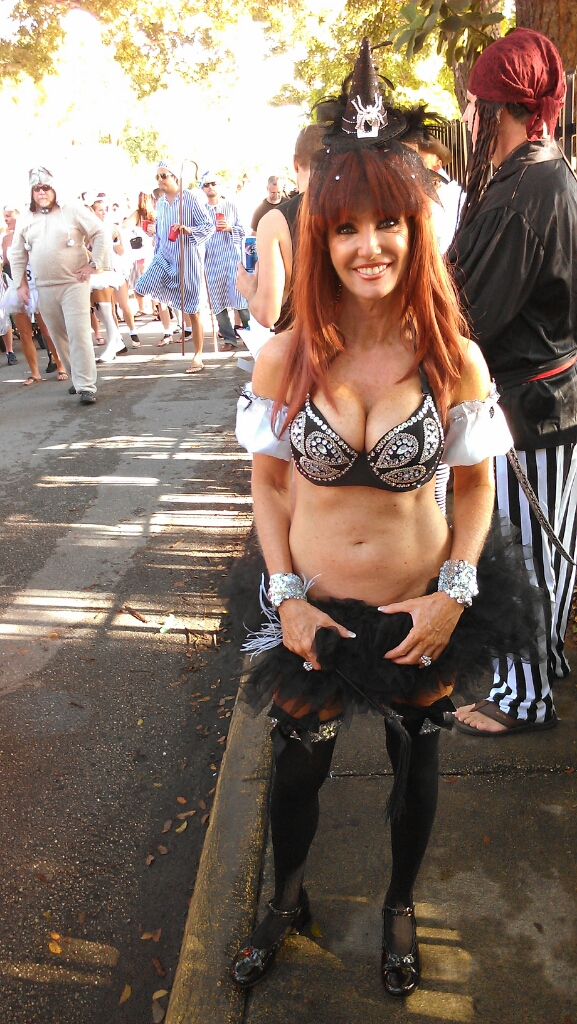 Wit and charm and youth and a sensible publicity agent are the tools the outside world, the  Up North world, uses to keep people in their place. Key West used to pride itself on creating a small space in what is actually a very conservative insular little town,a space for outsiders who needed relief from conformity. Fantasy Fest isn't the greatest representation of what Key West has to offer, not by a long shot, but it is  a representation of what a lot of people crave in their gray monotonous lives, and it's too bad they have to come here to be able to  feed that inner demon once a year in a glorious farcical display of general bad taste and titillation. Bacchanalia, Saturnalia, Fantasy Fest. Two made respectable by the passage of time; the third despised by those among us too fearful to do what the momentarily brave from elsewhere manage to do: mask and make themselves vulnerable on the streets. In almost perfect safety too.  Not bad for a small town filled with opinions, most of them negative.
Posted by Conchscooter at 12:00 AM 3 comments: