Last night I took this picture on the way home from a fund raising dinner on Stock Island. It was just after seven o'clock and the sky was a blue and pink and purple mess, just one more breezy, cool, yet essentially serene Florida Keys sunset.

It was seventy degrees and the north wind has been blowing cool dry air for days so I have taken to wearing my windproof vest in these Autumnal conditions. I know it sounds silly but when your blood is used to eighty or more degrees day and night, seventy degrees (known locally as 'zero degrees') feels cold on the skin. The air conditioner was off in the car for the first time since April. It wasn't the cold that forced me to take the car, rather it was because I had a frisky Cheyenne now unwilling to be left at home when she could be out walking. My Labrador loves these cool winter days and her summer hibernation in air conditioning is over for a few months. This next picture is of the south side of Big Coppitt which was protected from the breeze and the waters of the bay looked as smooth and glassy as a pond in the dying light of day. 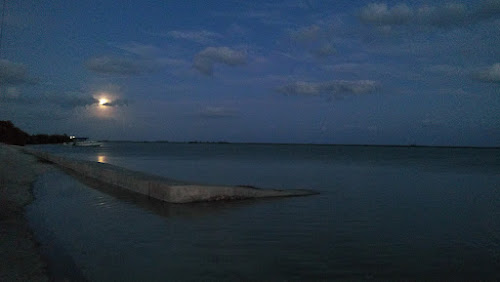 And then as we sit here in peace and serenity in the fabulous Florida Keys enjoying a refreshing end of October, a break at last from the heat and humidity of summer, we hear that Hurricane Sandy is wrecking New Jersey and New York. And on top of that a massive winter storm is preparing to blanket parts of the northeast with snow. I mean, how weird is that? A hurricane and snow at the same time. The young Conchs I work with have never seen snow, except on the screen, and the idea of the two mixed up all together is fascinating and as unimaginable as meeting a Yeti on the street. Down here, in the land where a Category One hurricane is a matter of no great moment, the levels of panic seen Up North are every bit as startling as the notion of a snowy hurricane landing on your house. All I could think was that a snowdrift would put a serious damper on the hurricane parties traditionally held in the Keys.

But then when we look at Hurricane Sandy's impact on New Jersey and New York we know that self important reporters will call this a "killer" storm, not because brown people in tropical Haïti or the Bahamas died as it made its way north, but because Americans actually died when it rolled across our coast. These aren't people living in shanties or on low lying islands in some foreign land. These are our neighbors whose subways have flooded whose Amtrak trains have stopped running and whose planes are grounded. Electricity is cut off and by Key West standards unheated homes now without power face the prospect of becoming ice boxes. I mean, seriously, who wants to live through a hurricane that brings frigid temperatures in it's wake? In our islands a hurricane, even one that leaves behind devastation also leaves us sweating and buggy and uncomfortable but not hypothermic ferchrissakes!

Down here waterside dining is still a peaceful and enjoyable activity, the cool temperatures revealed by the long sleeves on the shirts in the photograph above. I find it remarkable when we are busy getting ready for a storm and the rest of the country barely seems to notice. After Wilma it was surreal dealing with the flooding that went almost unnoticed, overshadowed by the vaster more fearsome destruction caused just weeks earlier by Katrina, while the rest of the country went about its business as usual. And this summer I never noticed the appalling drought until I flew to Iowa and saw the entire state reduced to a brown crisp. It's only when it's in your home is the disaster real. And in this case I hardly know the affected areas at all. This is what I know:

I listened to NPR yesterday (91.5 from Miami) and it was astonishing how parochial, how community-radio-like the national network sounded. They were all excited and aroused by the storm in their own backyard. Similar winds and floods down here produce a yawn from the hardened newscasters in the nation's capital. Sods. Still I suppose there is a reason people still ask how we poor convicts manage hurricanes on our tiny lumps of rock cast into the middle of this big warm ocean like errant hurricane bait chumming for wind. It seems to me, considering the recent major quake in British Columbia, fires and drought across the US and now snow to blanket West Virginia while frigid winter is already shriveling testicles in Alaska, these funny little islands are doing quite well so far in the awful weather stakes. My wife goes back to California next week for a wedding and more than anything she will bitch about how cold and damp beautiful San Francisco is. Lucky her, she gets real Mexican food and superb Indian and Chinese cuisine while I'm stuck here with Cuban bread and palomilla steak if I want to go "ethnic". I just hope an earthquake or a mudslide or a forest fire don't get her while she's away from the safety of the Florida Keys where eighty five degrees is the forecast high all next week.