There are days in my life that I feel like I make idiocy an art form. It doesn't take much either and though I enjoy my role as an ironist in a world that doesn't much appreciate cutting edge irony I do not often like being stupid, especially at someone else's expense. Duh. 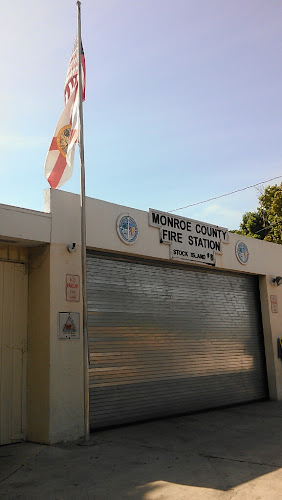 My wife wanted to meet on Stock Island and swim in the club's heated pool which was not a radical suggestion but it completely fell apart when I arrived at the club bright eyed and bushy tailed and only then discovered my swimming apparatus was secure and safe at home. I thought my wife had the trunks and towel while she thought I had them. The net result was Cheyenne got a splendid walk and I felt like an idiot. 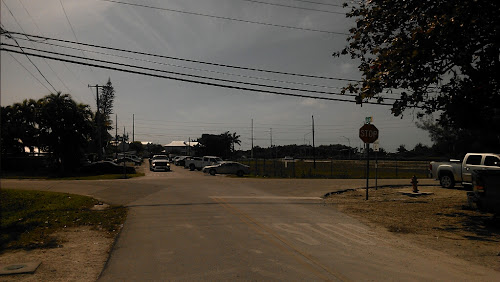 Partly too the reality these days of driving the Overseas Highway seems to devolve into a sort of funerary procession at speeds considerably below the already not adventurous speed limit in a long, nay endless, line of people driving slowly in the same direction as myself. Furthermore there are equally intense lines of cars coming in the opposite direction which makes passing complex. The result is that travel on the Overseas Highway is dreary which makes you think twice before you go into town, and then imagine how bored everyone else is so they start getting distracted and texting and that makes you think a third time about driving I to the city... 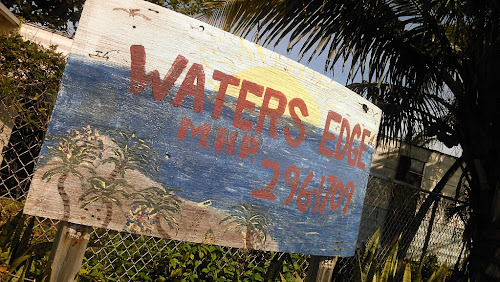 I have read complaints that tourism is down in the city, a statement that surprises me. it seems to me the city has been packed and continues to be packed, not so much with early morning drinkers perhaps, but certainly with people of a certain age. My guess is that the crumbling world economy is having a greater impact on the younger generation and will thus lead to an older demographic in Key West. Perhaps we will catch up to mainland Florida known world wide as God's Waiting Room. 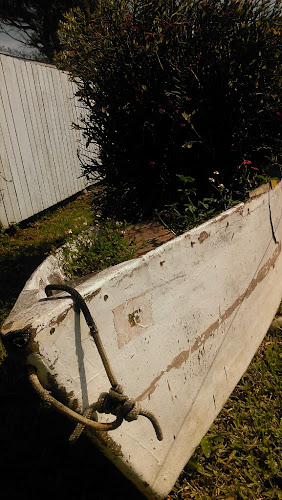 Stock Island has taken a hit from the economy's shortcomings. Stores have closed and grandiose development plans have slowed. We used to read of islad wide land purchases and worries about where the low income workers would live if Stock Island were gentrified. So far no such luck, the trailer parks are still intact. 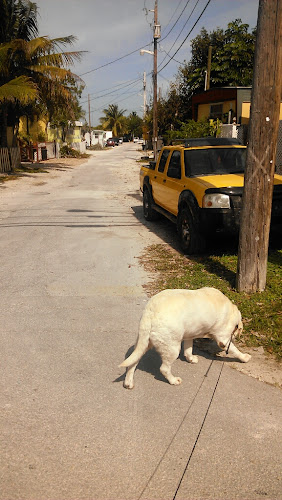 While the private sector holds fire, Monroe County has gone ahead with a long delayed plan and agreed to build a multi million dollar fire station on the site of the old worn out shed that houses an engine. Like most construction in Key West these days work seemed rather, how can I put it?- lackadaisical I suppose. Nothing was actually happening on the site. In Mexico you don't pay property taxes on any home where construction is not completed which is why you will frequently see rebar sticking out of the tops of houses. Here, rebar means no work is being done. 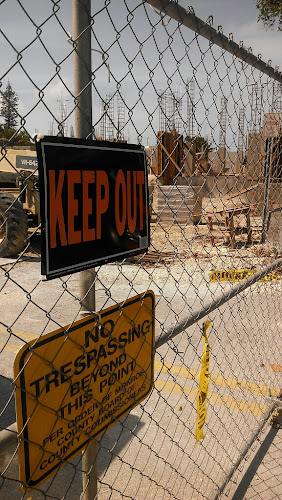 There is some housing being built near Highway One. Originally they had talked of building a strip mall anchored by a drug store, amid general wonderment. Key West already has several competing national chain outlets and one more seemed over the top. apparently that sentiment took root because nothing happened on the open space next to Burger King for a few years. 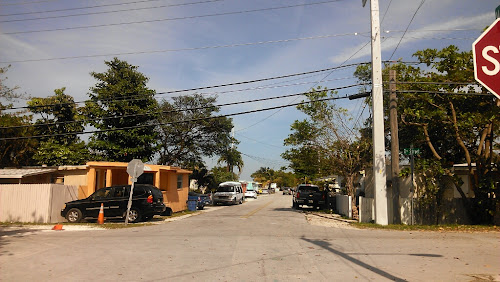 Then construction started and it turns out low income housing, of the government subsidized type is in the works. I used to walk Cheyenne's predecessor there, across what was a rubble filled field. Now pilings are going skywards and the stilts will soon be covered in modular homes. Worker housing a step up from trailers is sprouting across Stock Island and I know a few people who are very glad to see it. 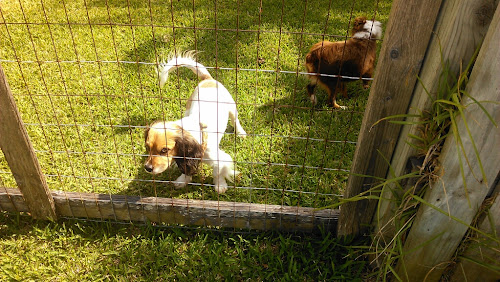 Not half as glad as these noisy little critters who saw Cheyenne coming and went berserk. She ignored them and strolled on by. Good dog. 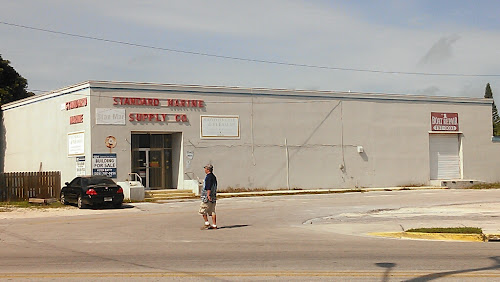 Standard Marine was a chain based I believe in Tampa with half a dozen outlets across south Florida. They closed in the downturn, beaten down by larger chains and the Stock Island store as you can see has generated no interest and so it sits advertising a moment in retail history. 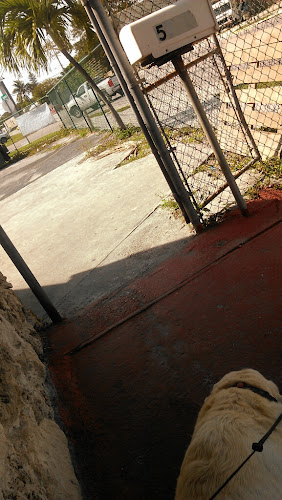 It's been hot and summer feels like it is upon us as humidity levels rise proportionate to the eighty plus degrees of a sunny afternoon. Thirty minutes into the walk Cheyenne had had enough and took refuge in the shade of the overhang at El Mocho my favorite Cuban eatery, which closes at three so temptation was removed. We staggered on, closer to the car, from shade to shade and frequent breaks for the fur coated Labrador. 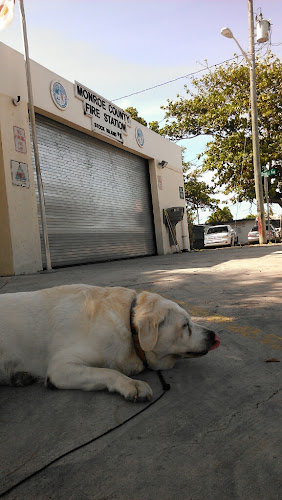 I find it ironic that the private sector which decries government at every turn lines up for government contracts. I wonder if we will ever be able to have a sensible discussion at the national level about how things work. I have been reading of efforts to roll back the "Too Big To Fail" designation for the banks and the robber barons that run them. The National Rifle Association opposes back ground checks for people who buy guns and our Dear Leader proposes modest cuts for Socail Security right out of the gate with no corresponding cuts for the one percent. Common sense is still on the run and I wonder when and who will tell us to eat cake as we prepare to stand in the breadlines in our old age. 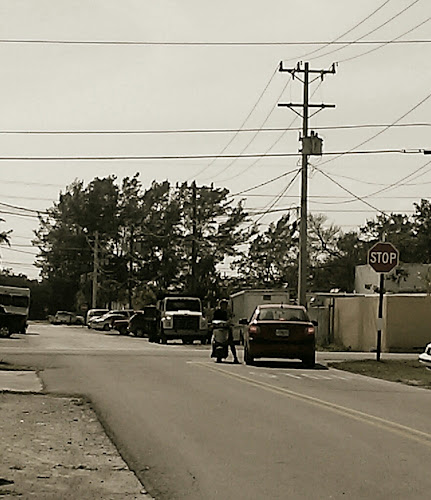 Stock Island as is well known used to house the cattle, the stock, that was killed from time to time to serve beef on the tables of Key West. Now it houses the stock that rides into Key West every day to keep the hotels and bars and offices operating and looking spic and span. 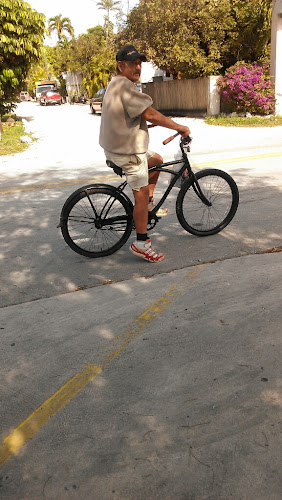 Nowhere has escaped the drive to modernize and change but Stock Island has done a fair job of staying working class. 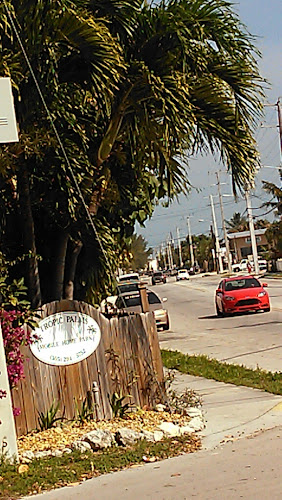 I wonder which way it will go this island far removed from the million dollar mansions of Old Town, and the haunts of the wealthy elderly visitors who rub shoulders with them.