My wife is confined mostly to the house by the Coronavirus currently wrecking economies around the world. Which was why I had time on my hands the other night before I was supposed to attend a concert at the Tennessee Williams Center on the College campus. 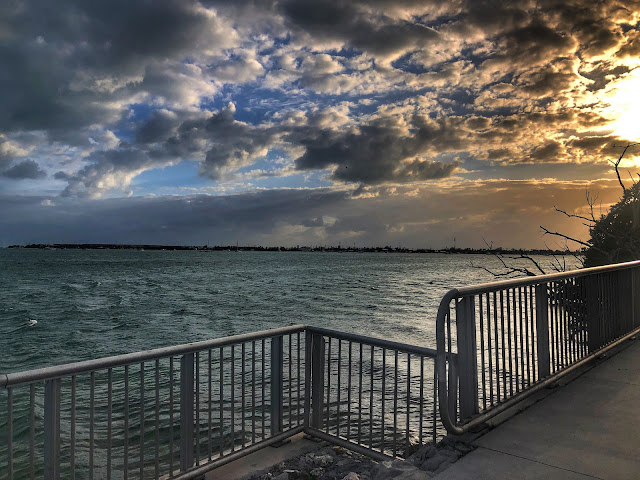 I drove from work to Publix, picked up a  sandwich at the grocery and drove to Highway One between Key Haven and Boca Chica. I drive past this stop a million times a month  into and out of Key West but as I am going somewhere I never take the time to stop so I figured a visit was overdue and as I had time before the program was scheduled to begin at 7:30 pm (Daylight Savings Time = Daylight!) I stopped on the shoulder to eat my sandwich and plot my photography. 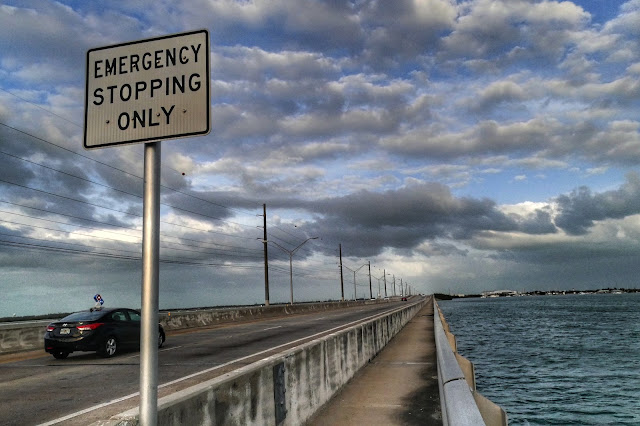 My wife suffers from rheumatism and the treatment weakens her immune system to the point it is an irritation at worst but her doctor got very stern with her and said she is to avoid crowds, airplanes and movie theaters for the duration as the 'flu virus could do her serious harm. It was  a pity as she had decided that this time she wanted to attend a classical music concert with me and instead she encouraged me to go by myself. 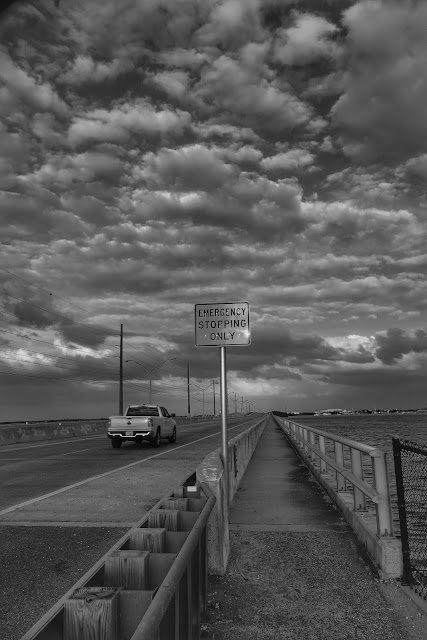 I can't see the value of creating the sort of panic that has wrecked stock markets interrupted trade and sent people frenetically shopping for the sort of supplies prepper nutters usually crave. Most of us with normal immune systems face the prospect of a fever every year and so many of us refuse to be vaccinated, why I don't know. All this herd madness means people like my wife who, lacking a vaccination are at risk, can't buy sanitizer or wipes thanks to the stupidity of the uninformed and unintelligent. People baffle me. 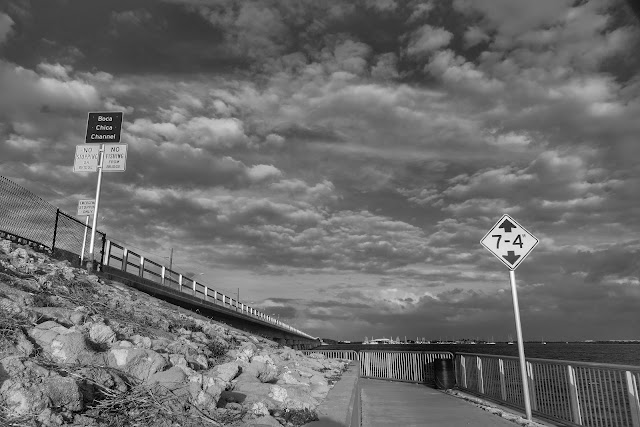 It's an ill wind that blows no one any good so I took advantage of being utterly alone and untrammeled by obligation to go out and look at a cloudy sky and a dying day that normally I would be obliged to drive past. 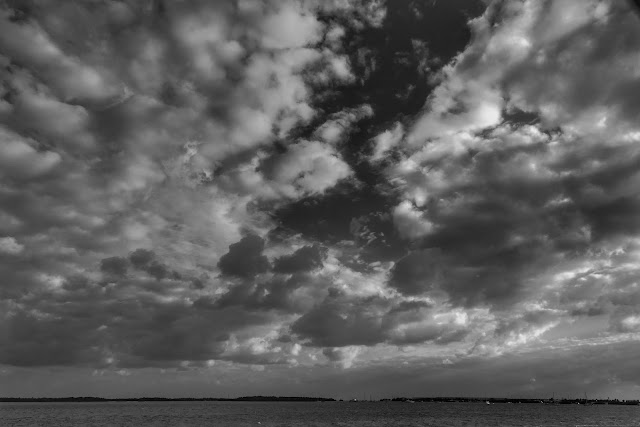 I don't know about you but the light and dark and shades entranced me. 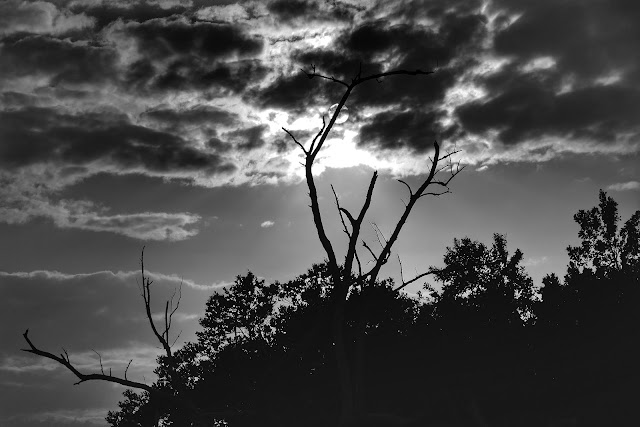 And there was a frigate bird overhead which was interesting as I discovered later as one of the music pieces in the program told the tale of Key West and  a frigate and a hurricane were all involved in inspiring John Gottsch's Sunset which was played for the first time ever by the South Florida Symphony. I thoroughly enjoyed it much to my surprise. I am not a fan of modern atonal compositions but Sunset was lively and had all the elements I prefer in a  piece of music: a story and structure a melody and a certain effervescence. You can't hear it yet because it is going to be recorded about now and published eventually I suppose. 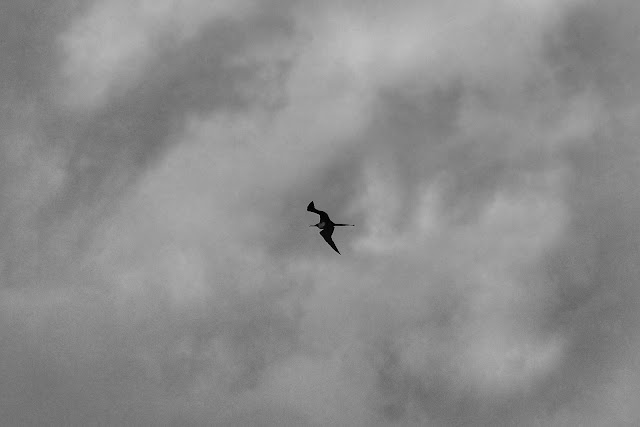 The boats anchored in Boca Chica Bay were getting bounced around a bit by the 30 mph northeasterly gusts: 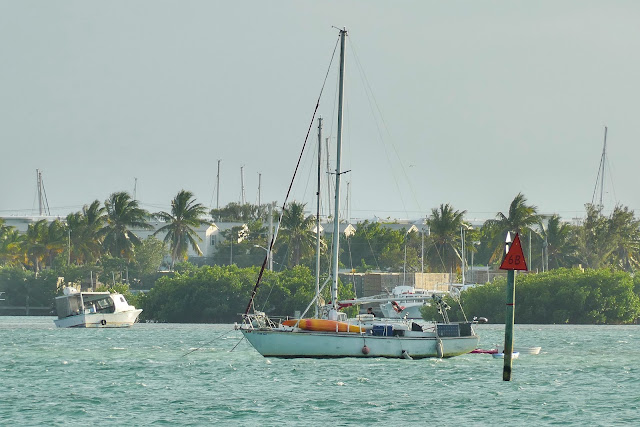 But fortunately the generally shallow waters in the Keys keep wave action to a minimum: 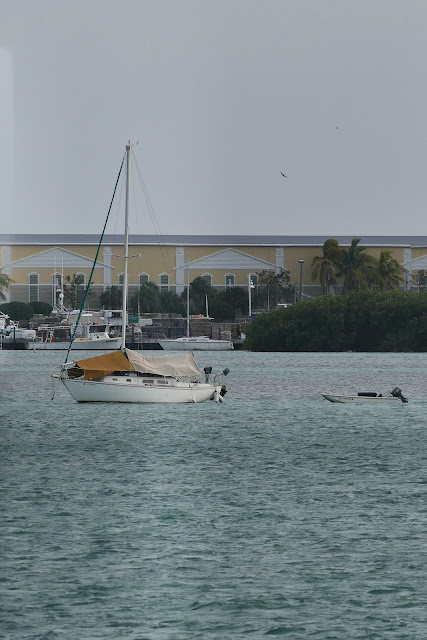 I say fortunately unless you happen to be a surfer.. 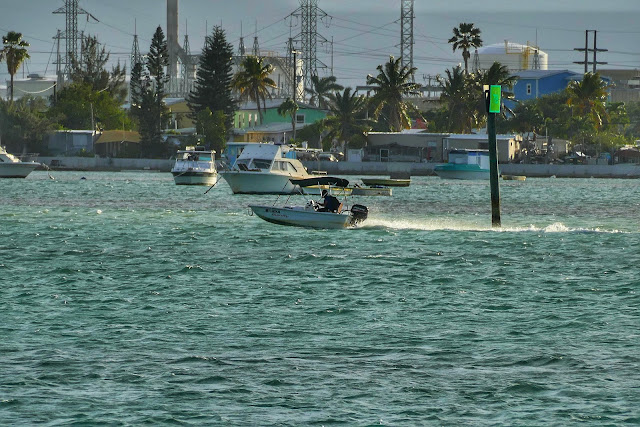 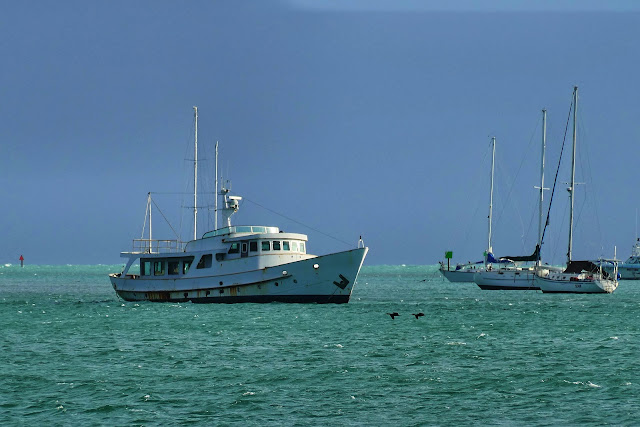 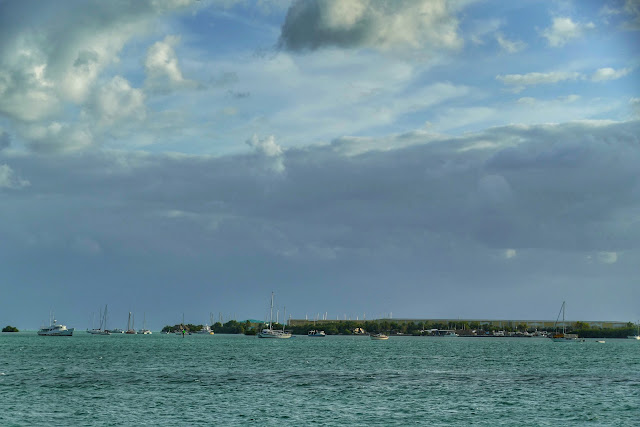 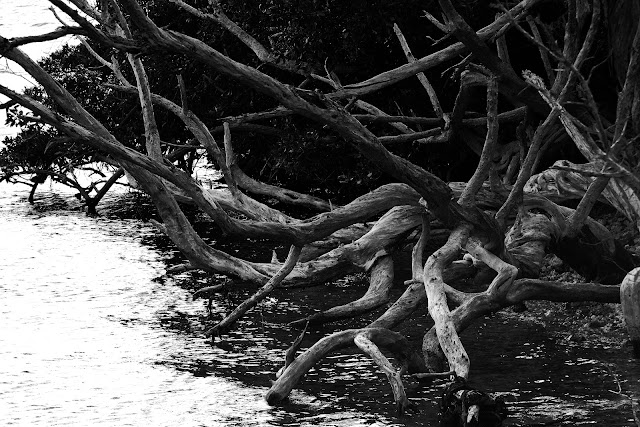 Back at the bridge I girded my loins to take the underpass back to the north side of the highway where I had left my car. This is the footbridge alongside the highway looking east toward the Boca Chica Navy Base. 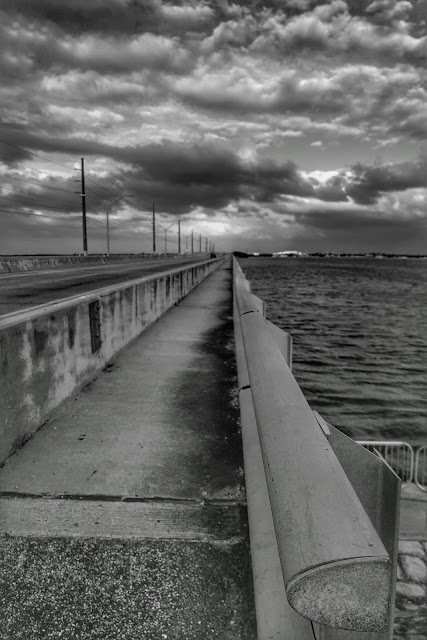 These two bridges are the underside of the four lanes of US 1 running overhead. 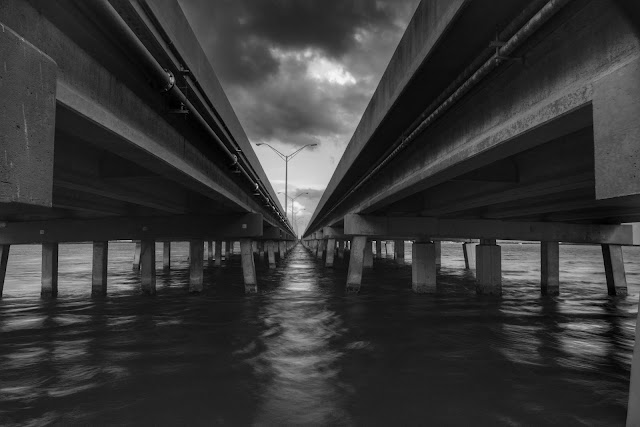 And this is the underpass, a solid construction used by (sensible) cyclists and pedestrians. There is a Class 1 shoulder bicycle path separate from the highway on the north shoulder. 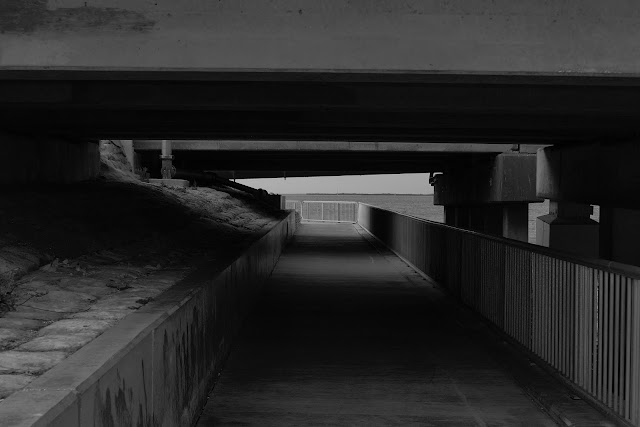 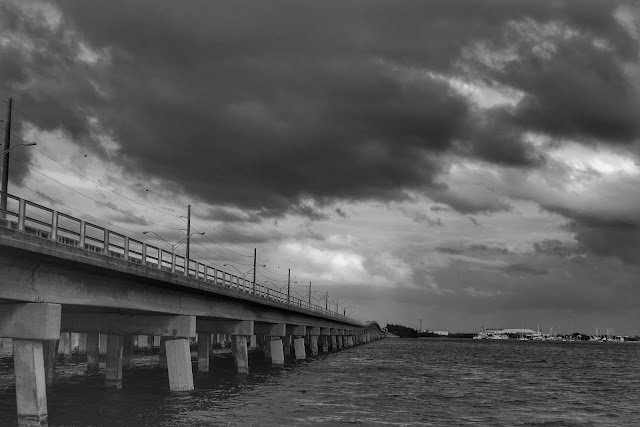 They use solid bags of cement wetted down and dropped in place to create barriers to support the soil under the bridge embankments. They make a nice pattern. 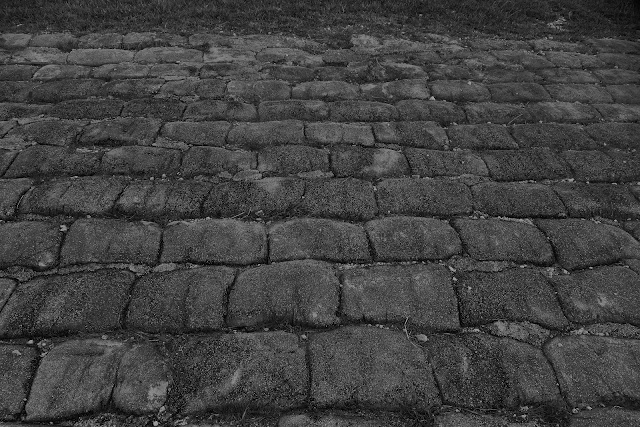 The medical helicopter returning to the hospital. I am quite fond of Trauma Star after they flew me to  Miami. I was actually fond of them before but I am more grateful to them now I suppose. Else I'd be dead. And no charge to me as I am a resident of Monroe County. Sweet deal. 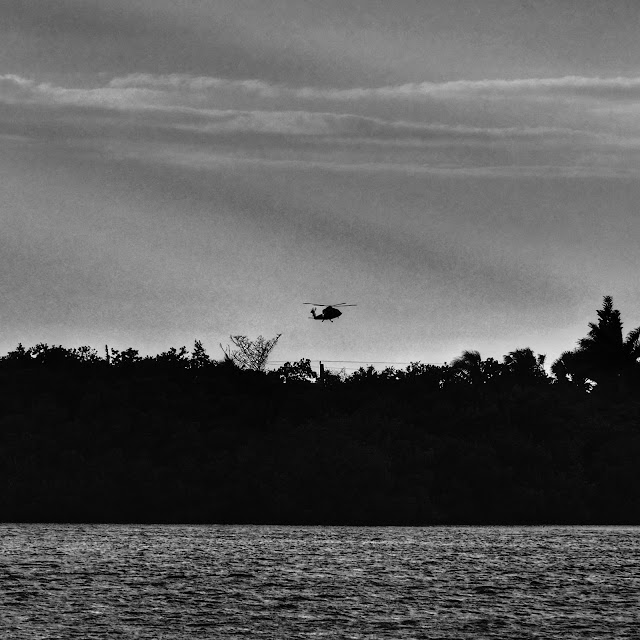 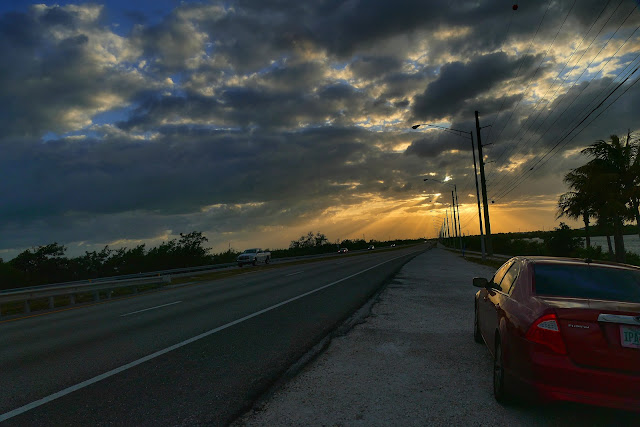