The magic of salt water alongside downtown Key West, the sun is heading to the horizon and the waters are sparkling. 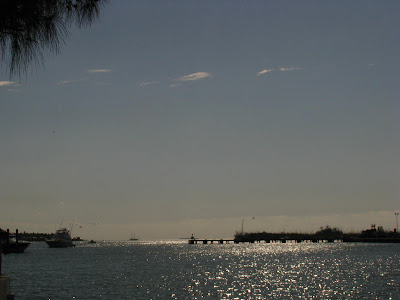 A "bight" in nautical lingo means an indentation in a coastline, not really deep enough to be a bay but enough to provide protection for a boat at anchor. The Key West bight used to house commercial fishing boats mostly, but these days that fleet has migrated elsewhere, many of them making a home on Stock Island. 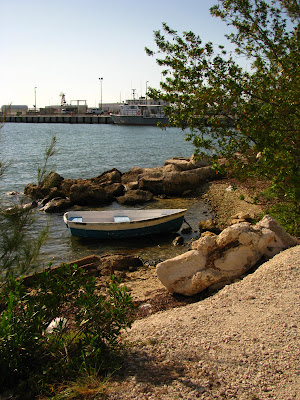 A dinghy neatly tied up is most likely the family station wagon for a live abord who uses it to get to and from home. In the background the US Coastguard Base, Sector Key West, housed on the finger piers built by Flagler's engineers. 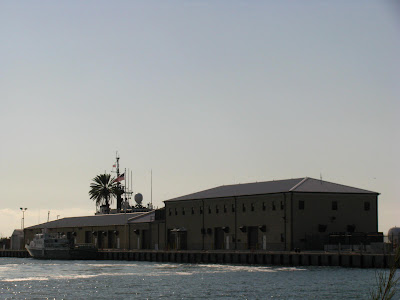 The docks were dredged to accommodate liners and cargo boats plying the waters to and from Havana, meeting Mr Flagler's trains from New York, all part of his scheme to get fresh fruit UP North in winter. Lacking anywhere to put his rail terminus Flagler had the docks built and tracks were laid across the island from the Triangle in a line behind Publix to garrison Bight, a place also created by human ingenuity. Palm Avenue was built to accommodate the rails and so it went. 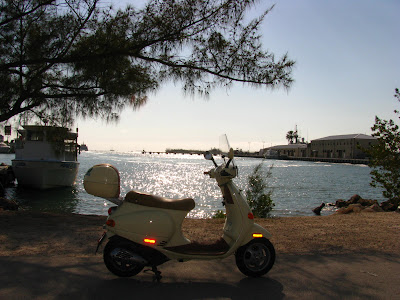 Who needs a train when one has a Vespa?

The Bight is in large part owned by the city and rented to the businesses that occupy the perimeter (not the Galleon).

http://www.keywestcity.com/department/division.asp?fDD=13-76
Posted by Conchscooter at 5:01 PM No comments: Links to this post

Miraculously enough some rain fell a couple of days ago when a thick thundercloud swept the Lower keys from Key West to Big Pine. The air, as a result is clear, colors are crisp and dust has abated at least for a while. And mosquitoes are starting to reappear months behind schedule. The newspaper has had a couple of complaints about mosquito control not doing it's job of course but I've seen the trucks out collecting samples and spraying so I know that's not true. Mosquitoes are just one of the local hazards of living down here but nowadays we hear a great deal about dengue fever. The Mosquito Control District put this ad in the paper advising where the highest incidence of dengue has been reported, green is good, yellow isn't and orange is really not. 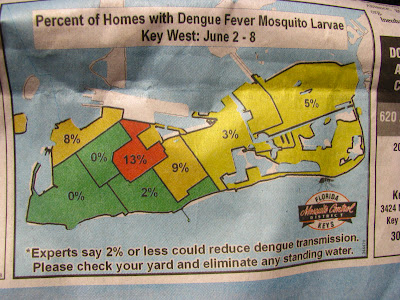 More than 20 years ago I survived a bout with dengue myself that I contracted during an epidemic in El Salvador. At the time there was a civil war going on and I was much more concerned about being shot than bitten and though no bullets aimed at me hit me, a mosquito did. It was alarming at the time as hundreds of malnourished highly stressed Salvadorans died but I was a highly stressed reporter who was well nourished and I had a nasty attack of the flu. It lasted longer than my girlfriend's patience, a woman who was not the nurturing sort as I recall, especially when it came to ailing boyfriends. So it is with reports of dengue every summer in the Keys. Sensible precautions with repellent it seems to me should be ample. Then I think of all the people who shrug off the benefits of a flu shot each fall and i wonder at the hysteria caused by dengue. 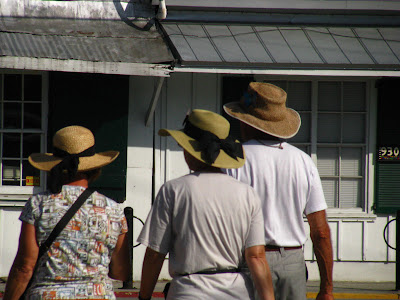 Unless you have Latin skin like me or wear a big straw hat like this trio, you probably should worry more about sunburn this summer, and eventual melanoma than dengue. But I apply sunblock and repellent copiously, just in case. As should you if in the Keys.
Posted by Conchscooter at 11:01 AM 2 comments: Links to this post

I am pleased to note that Bravo Nights in Dispatch at Key West PD is fully staffed at last. Fred finished his training after ten long months and is a fully qualified telecommunicator on all three positions. He joins Nick and myself to round out the manly men shift in dispatch. To celebrate we ordered dinner to go.

And what you see here is the man himself unloading the swag from the Four Buoys which is a relatively new place on Southard Street just off Duval. http://fourbuoys.com/ Hot sauce is optional and hot.

"The Fred" is actually named for Fred himself who dreamed up a new way to eat a hot dog. Fred grew up in Key west and went to Hollywood after college to get some work experience in the film industry. He has some great stories TOO about working on Dexter, the TV show. But his greatest contribution to Key West culture came from his observation of Los Angeles nightlife. It seems that coming out of the bars in the city he noticed Mexicans grilling hot dogs wrapped in bacon. It was an aha! moment that he brought home to his friend's hot dog shop. 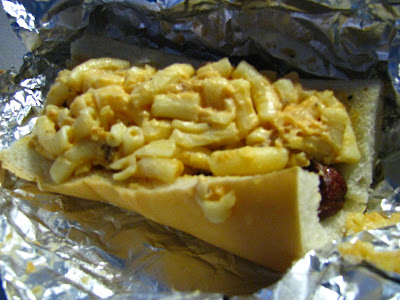 First you wrap it in bacon, then you put it in a Cuban bread bun and then you cover the whole thing in mac and cheese, as one does. And then, if you're Nick, a man of modest appetites you look down at your Fred and mutter "this is a heart attack on a plate!" and dig in.

We are the manly men of dispatch because there was not a crumb left over five minutes after we dug in. Proper fortification for a night of phone answering.
Posted by Conchscooter at 5:01 AM 4 comments: Links to this post