Waiting for the local's parade, officially the Masquerade March I went to Duval and Greene this afternoon, the epicenter of the week's madness. If nudity offends I hope you have already looked away I wrote a long title to this essay to be clear on that subject. The pictures I hope speak for themselves. 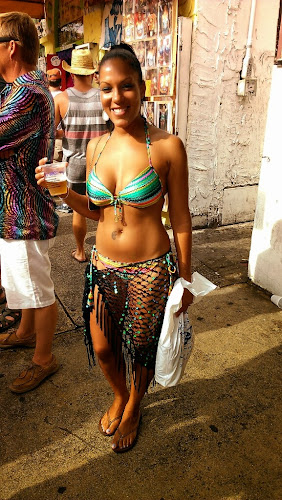 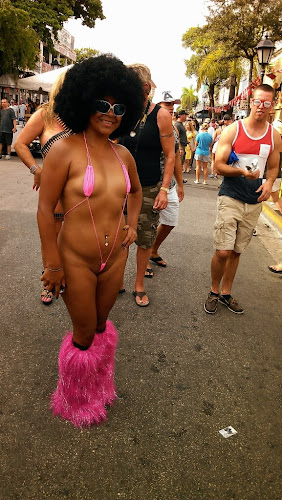 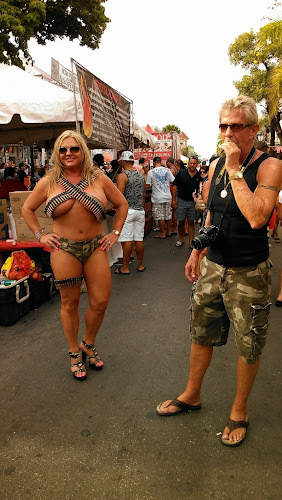 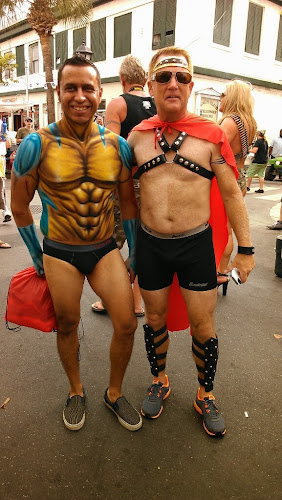 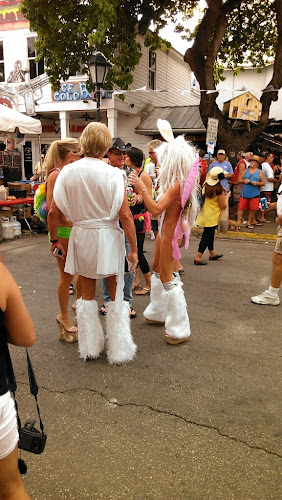 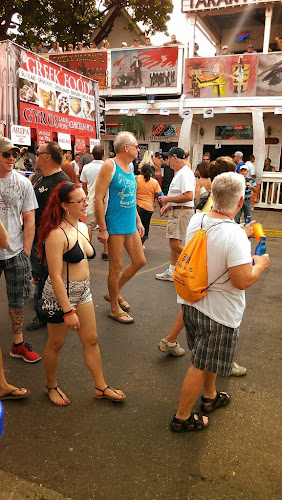 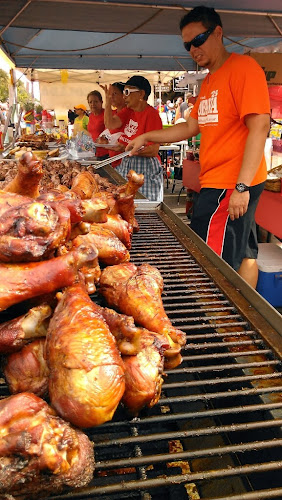 Michael Beaudet the palm weaver is back from two years in Hawaii, today with his biggus dickus. 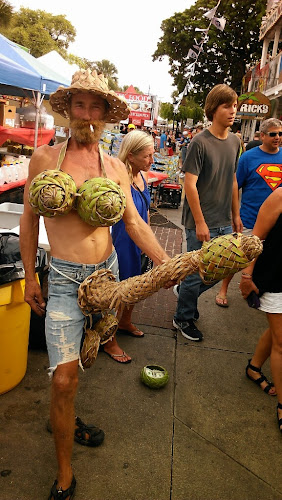 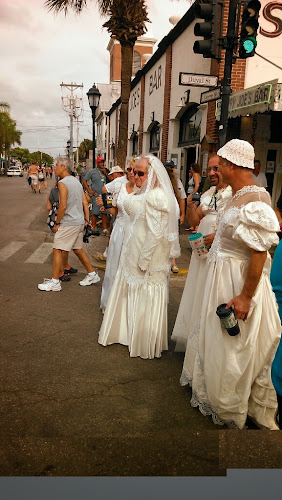 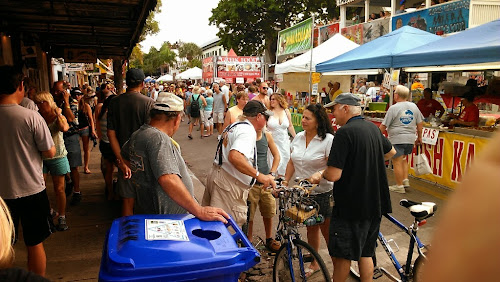 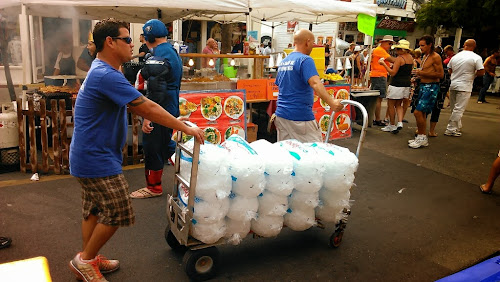 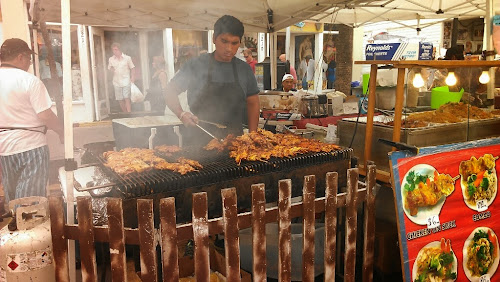 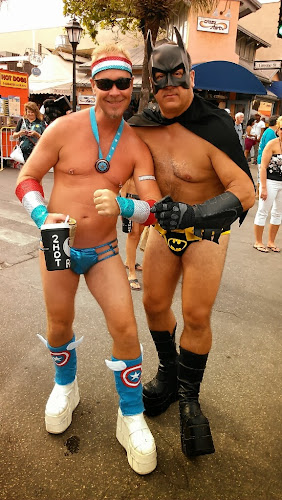 ...and their super heroines ( I thought they were gay at first but he put me straight...as it were). 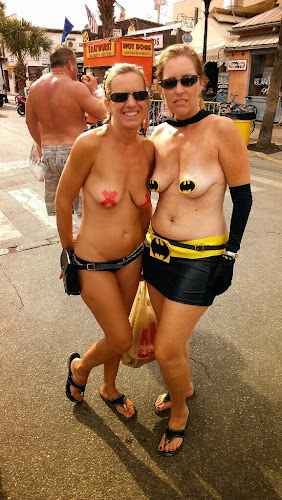 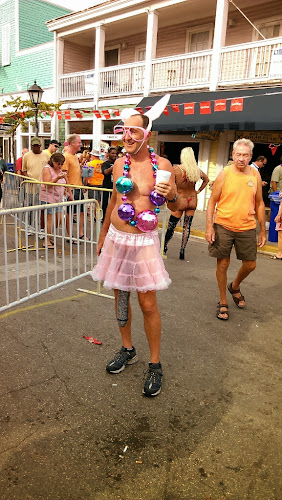 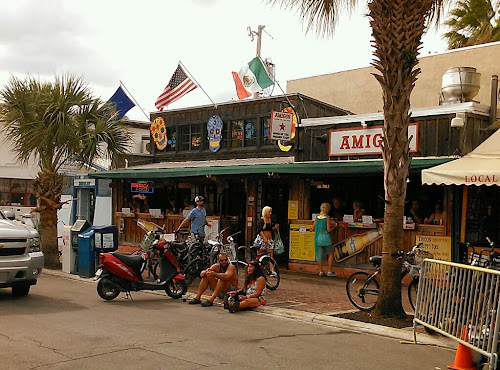 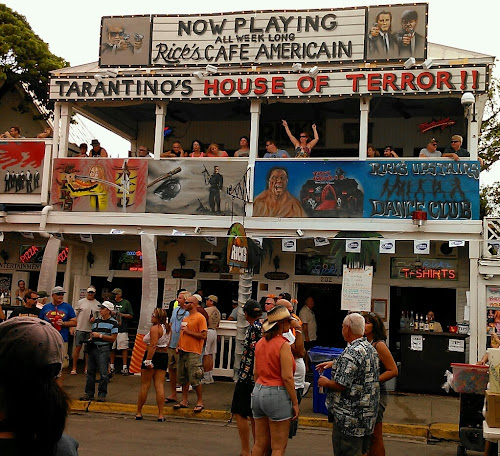 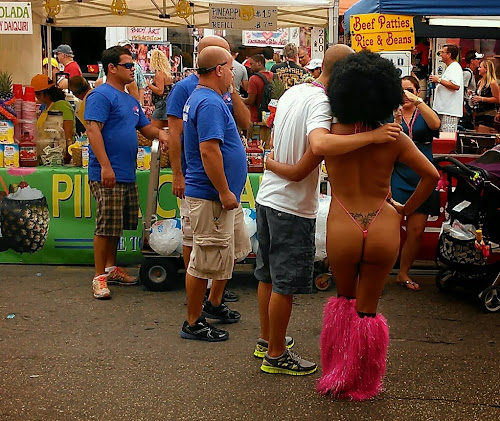 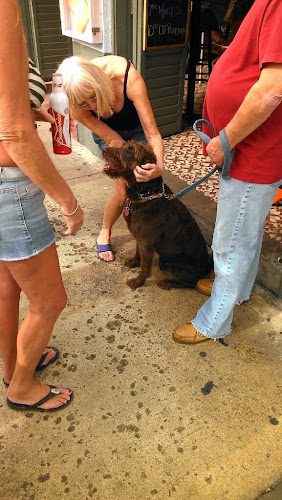 She doesn't like crowds but she likes our bed. Good girl. 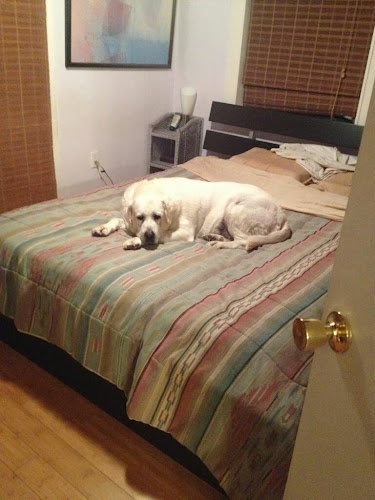 Posted with Blogsy
Posted by Conchscooter at 5:18 PM 1 comment:

The way I take pictures for this blog is pretty simple. I walk or ride around with my Android HTC 4G telephone to hand and I snap what I see. I am very fond of the phone as a camera and most of the time I think of it as a picture taking device not as a means of communication. It has built in filters and I enjoy playing with them so you will see color saturated pictures or because key west is so full of colors sometimes on a whim I scale the saturation level back. I try not to do the black and white artistic thing too often as the point of my diary is to show things as they are, warts, telephone lines, outrageous colors and all. 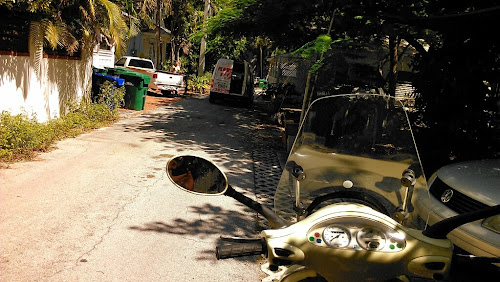 I mention this by way of introduction because when I was on a lunch break with nothing in particular to do I scanned some of the author addresses in Key West that I wanted to photograph and I selected Baker's Lane as the next in my vague series about authors' forgotten homes in this literary town. 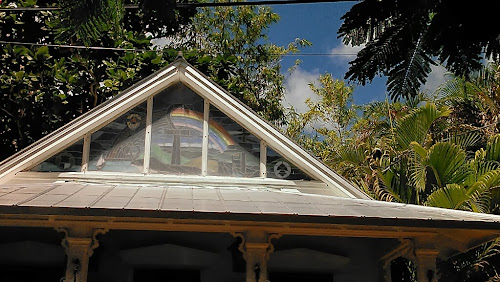 So when I pulled up near 709 Baker's Lane and discovered that it was the scene of much activity that blocked my photographic view I was left with a couple of pictures and no coherent story. I got a couple I liked and ran out of time and went home wondering what to do. Add old pictures of the lane in my files? Make do with the few I got? So Instead I went back, with Cheyenne in tow this time. Different day, different pictures, same place. 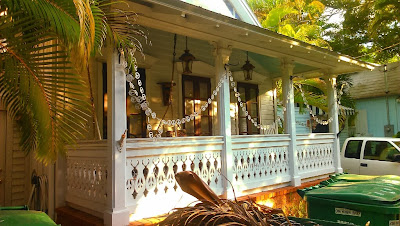 It once housed a writer by the name of James Leo Herlihy which may or may not mean anything to you, but when Midnight Cowboy was mentioned the slow glow of the light of understanding penetrated my thick skull. 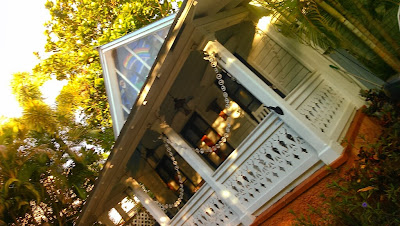 In reading a really terrific bio by Michael Snyder of Herlihy on the Key West Literary Seminar website you get what seems like a full picture of this man and in it he appears to have been born for Key West and what this city was when he had the good fortune to live here. In reading the link below you may get a similar impression to mine, that Key West these days likes to propagate the idea that it is still the bohemian town Herlihy seemed to revel in. 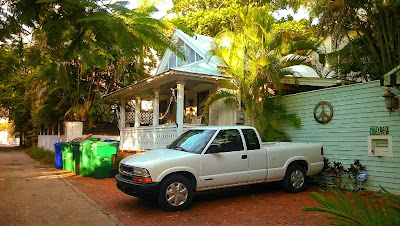 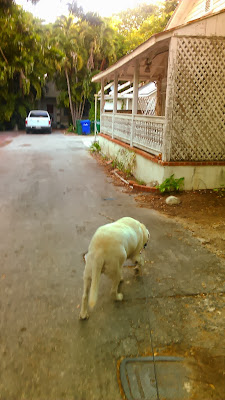 But the fact is that Key West shows no sign of Herlihy's presence on Baker's lane or anyplace else as far as I can gather. that time came and went and everyone worships Hemingway, a few literary types recognize the somewhat less macho Tennessee William's presence in town (they named a performance space after him at least!) but in the pantheon of Key West's literary past the cheerful young gay writer is gone and forgotten. Despite Cheyenne's best efforts to sniff him out... 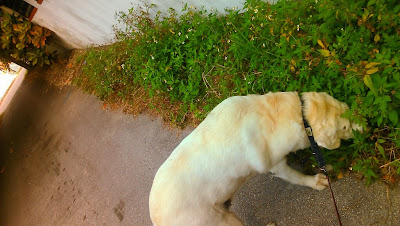 Today Baker's Lane is a quiet backwater, especially this time of year before and after Fantasy Fest when tourism is at a low ebb and the streets tend to be empty. 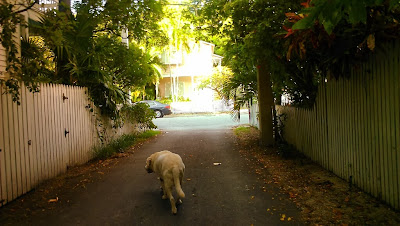 James Leo Herlihy's time in Key West seems much more innocent and frolicsome than today's incessant pursuit of wealth. His seems like the early spirit embodied of the first Fantasy Fest. Originally started three decades ago as a way to encourage tourism (and money ) to flow into town now it still serves that purpose but in a different guise. Now it is a release valve for people who may have been young when it started but now are middle aged and middle of the road and represent the establishment (oh, evocative word!) that the Herlihy's of the literary and music world were exploring and rejecting. Nowadays gay rebellion has stonewalled into middle class mediocrity and Fantasy Fest no more expresses the wild and free spirited past that Herlihy inhabited than Baker's Lane represents where once he lived. 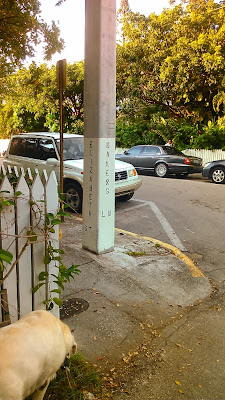 It is just one more pretty lane in the United States' largest collection of old wooden houses all collected together in one small town's historic district, seeking its own direction forward. And here I am with my Android in my hand watching it go and wondering. I do know one thing: had I been here in Herlihy's time I would have been a terrible bourgeois youth afraid to be seen anywhere near such a wild one. That perhaps is what I envy him, the wicked midnight cowboy.

Key West on Dwellable
Posted by Conchscooter at 12:01 AM 2 comments: