I looked out the window of the motel room forgetting it was summer time and thus still pitch black. I checked my phone which told me it was six in the morning and 45 degrees outside. I decided the whole thing wasn't worth it so I went back to bed. I had 400 miles to ride to so I had plenty of time to get home in time for dinner. 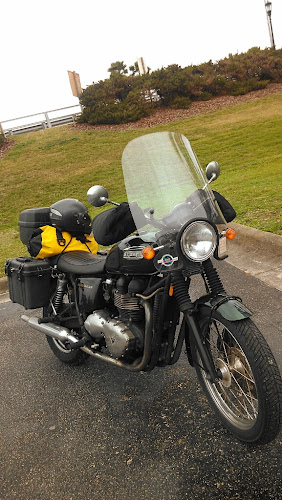 When my sister-in-law called and said she wanted us to show up for her son's graduation my wife pointed out she had a job to do but the ceremony fell on the Wednesday of my short work week so with a little shift switching I was available to show up at the Federal Law Enforcement Training Center in Brunswick Georgia to see the deed get done. And the use of only four hours of my annual leave for a week off meant I was going to go by myself to support the swearing in of a new National Parks Service Law Enforcement Ranger. 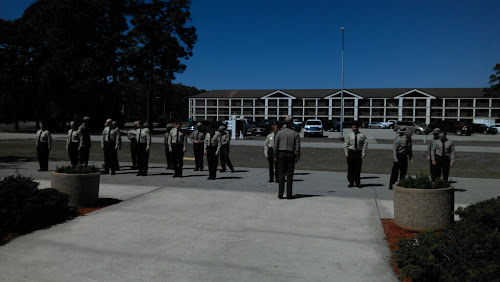 All that separated me was five hundred and fifty miles of freeway across Flatistan in March. When I saw my journey coincided with a cold front gathering strength over the middle of the state I admit I vacillated slightly and did consider taking the car what with it's heater and satellite radio (thank you Sirius for the six dollar introductory offer) but in the end I said bollocks to comfort and decided I needed to ride. 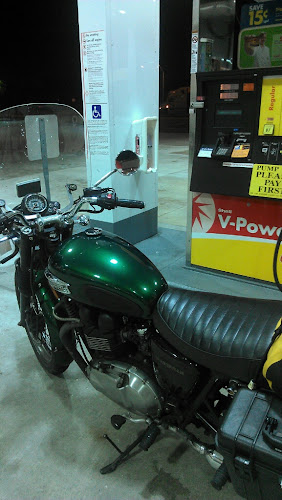 I wanted to check out the bike after the recent valve job and even though this wasn't a trip across those always enjoyable Appalachian mountains it was a chance to go for a ride with time to meditate on the meaning of riding and life and everything. It should be relaxing I figured as I got up at three in the morning and stared at my machine in the dark of night. My dog and wife were asleep upstairs as I should have been. Instead I was expected in Brunswick for dinner. Better get on with it, I said to myself. 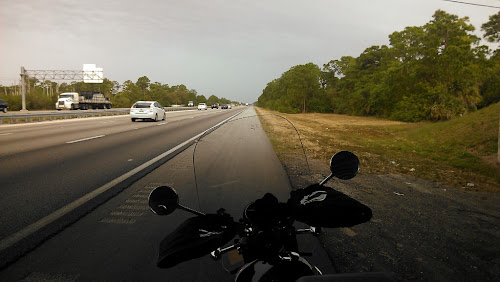 By the time it got light I could see black clouds ahead exactly as predicted by the numerous weather astrologers I had consulted prior to the start of this journey. Black clouds led to rain as the National Weather Service had promised against all my hopes of predictive failure, and I was less than halfway up the peninsula when I stopped under a bridge to get wrapped up in my Frogg Togg waterproofs. 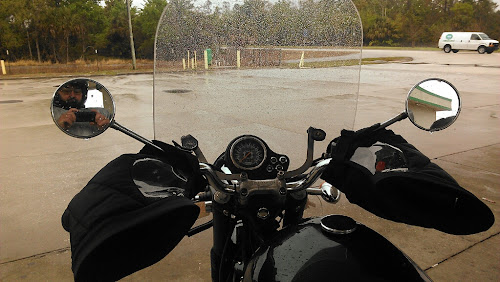 It rained and rained and rained for what seemed like hours but ninety minutes later I was in Daytona Beach and the rain had eased up a bit and I was still pretty dry and quite warm much to my astonishment. My gear would never do in Alaska or some other truly harsh clime but for almost sub tropical Florida it seems to be quite adequate. Not attractive but functional. 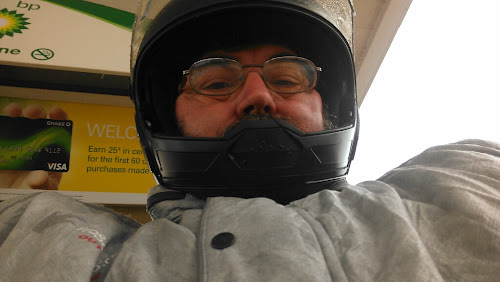 I had thought I might stop in Daytona Beach to check out the Bike Week extravaganza but the drizzle did not entice me to stand under an awning at the side of the road and watch water drip on chrome with a bunch of vacationing leather clad accountants and their wimmin. I stopped in a park to think and plan (and use the facilities) and I looked around as the wind whipped the rain away and brought a fresh chill to the neatly landscaped park facing the Intracoastal Waterway. 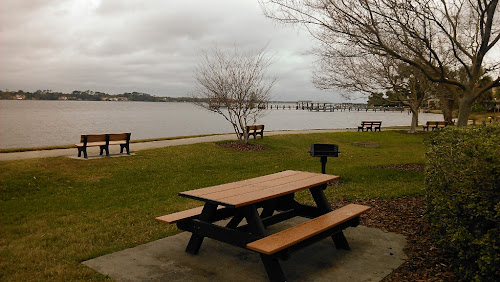 This, I thought to myself, is what Truman Waterfront will end up looking like if they get their way and turn it into landscaped mediocrity. You'll have to excuse me being grumpy but I am allergic to gray skies and drizzle. 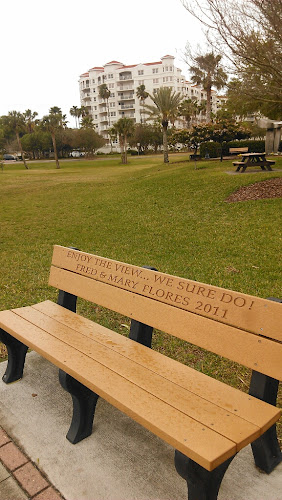 Daytona Bike Week plays up a short loop of extra pretty road with curves that is supposed to be one of the attraction of the motorcycle gathering. I figured I might as well check it out as I was there and I might save the downtown gathering for my return trip in two days. Daytona Beach Bike Week Loop Daytona Beach Loop 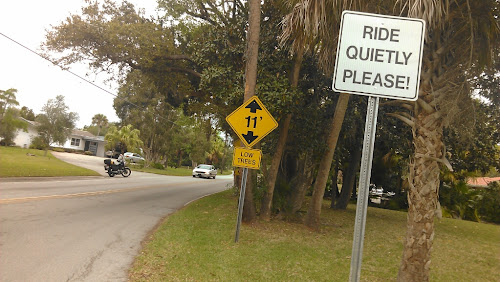 As usual they play it up as God's greatest gift since the Ark and honestly it's a nice little ride but not exactly a dream loop. I guess if you are down from the snowfields of Montana for a week of sunshine it probably looks nice and tropical but under a gray sky in the middle of a long ride across the Flatlands it was barely a little break. Mind you the weather was iffy enough that there were hardly any other motorcycles to be seen. Cowards! 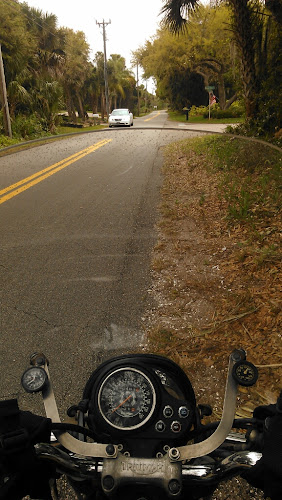 There were lots of For Sale signs and who can blame the residents for getting tired of all those open exhausts rumbling by. My beast of burden sounded anaemic by comparison with its factory mufflers but I don't do well with noise. I'd rather eat ground glass than live along The Loop however nice the homes. 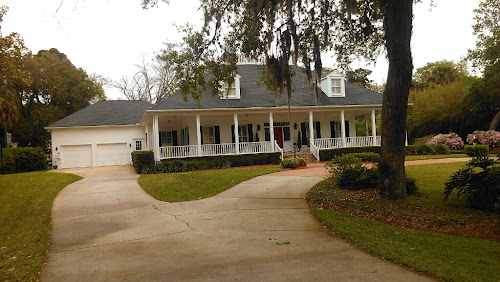 Then it was back to droning the freeway with only 200 miles to go and it wasn't yet noon. I realized I was likely to arrive before the rest of the family who was driving from Asheville in a proper car with a roof and heater and everything. When I'm riding I enjoy not having to answer the phone and all I have to listen to are the thoughts rolling through my head as I can't be bothered with helmet radios and blue teeth and all that other gadgetry. Freeway riding is not the greatest way to use a motorcycle but you do get to have lunch standing up in a greasy gas station parking lot wearing creased lumpy armored clothing. Pretty cool huh? 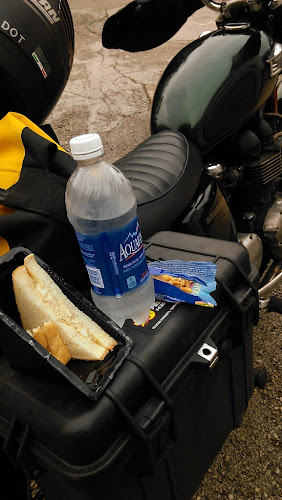 And on it went. The weather, always an important feature when one is miles from anywhere completely exposed to the elements, was starting to think about promising to offer a few minor rays of sunshine through the thick carpet of gray overhead. After I crossed into Georgia I got off the freeway and headed towards a small town called Woodbine. It was time to remove a few layers and imagine my surprise when I pulled off Highway 17 in the woods and found myself parked next to a lurking Sheriff who might have been waiting to issue a few speeding tickets. I'd like to think my pantomime struggles to get out of my clothing and repack my motorcycle might have distracted him for a few minutes and spared a few people from getting done as they speeded into the depressed town of Woodbine. 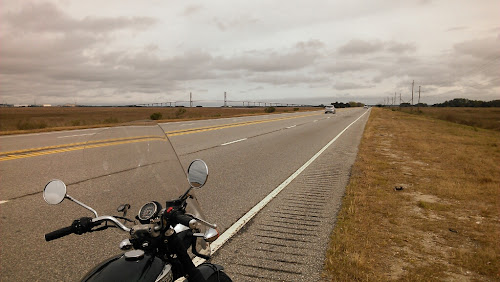 It turns out south coastal Georgia is is either very economically depressed or actually not depressed at all and filled with lovely homes, golf courses and lots of banks and upscale little shops. Both communities are surrounded by flat marshes and muddy rivers and long straight roads. It was like I hadn't left Flatistan at all and after twelve hours of riding the interstate I was not in Brunswick at all (depressed) but Saint Simon's (undepressed). 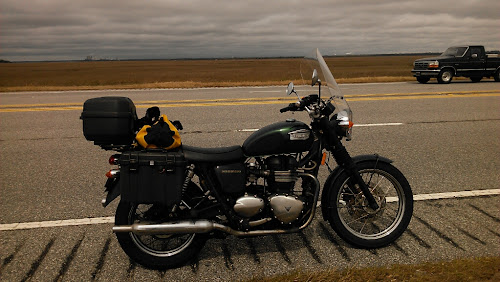 The Bonneville was perfectly behaved all the way with its new valve guides and all. And best of all sunshine was promised for the next day as the cold front was supposedly buggering off to inflict snow and misery elsewhere. Graduation day turned out to be the same day the College of Cardinals chose a new bishop of Rome. Golly what a lot of excitement for one day.