I was in town and it was just too pretty a day to ignore, so I parked the car near the Yamaha outboard shop at Garrison Bight and Cheyenne and I took off walking. There was a time when I used to captain the boat in the picture below. When the sailboats weren't running I might from time to time take kayakers out in the pontoon boat. 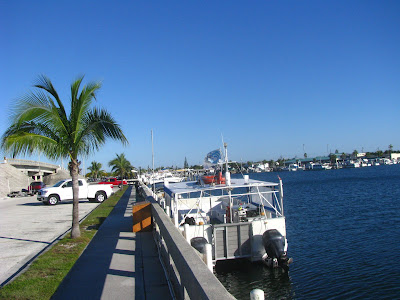 I am told that years ago (before my time- promise) it was used as a gay harbor tour boat with pornographic movies playing on a video. The captain told me he did a land sale business. Thinking back it's the sort of thing riepe should be bankrolling. Cheyenne is a garbage dog, it's just her nature (like riepe): 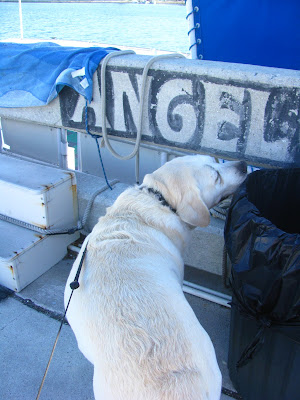 Angelfish Pier looks out across the inner garrison Bight Basin. Over there lies the Police Station. 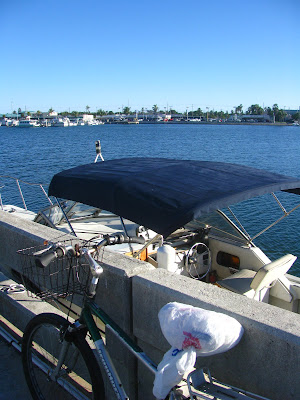 Well, off to the right a bit lies my work place. I was off for a few days and not much interested in thinking about 9-1-1 calls. This is the bridge that spans both halves of the marina. It's called Palm Avenue and it has a thirty mile an hour speed limit (snowbirds please note!). 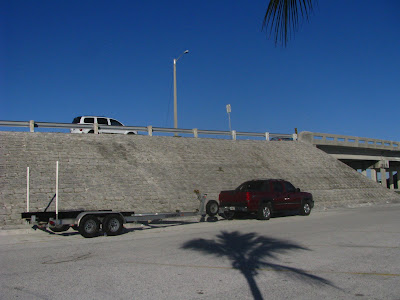 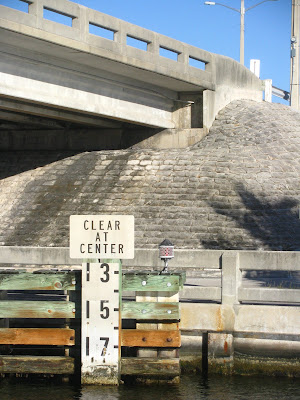 These guys were out looking for dinner and a cheerful couple they made. 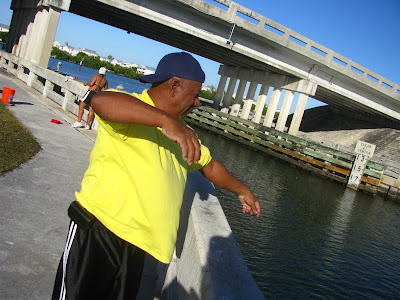 She was doing better than he was. "We'll eat well tonight!" 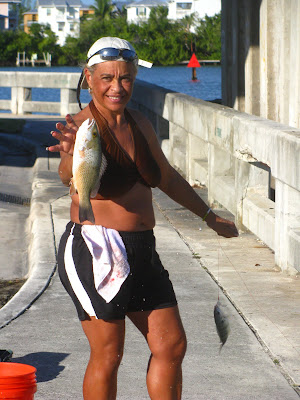 The poor thing was upside down flapping feebly in the water bucket the last I saw it. I wish anglers would kill their catches promptly. 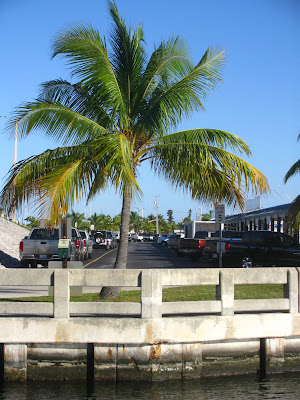 It was rather too cool for me to want to be out in the boat. Not everyone is so feeble. 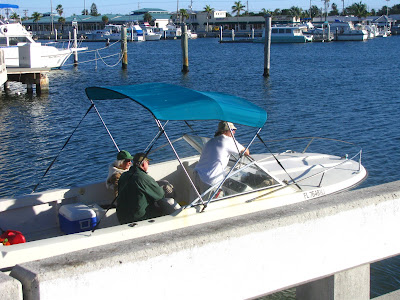 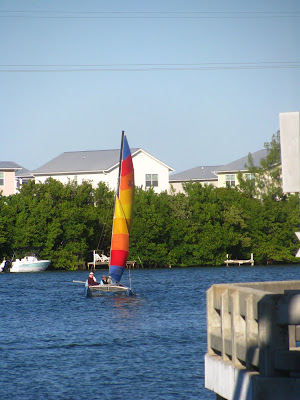 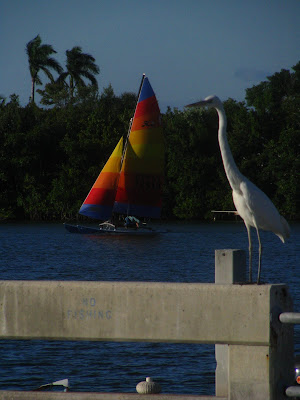 In the distance the Navy Base with the bachelor officers' quarters. 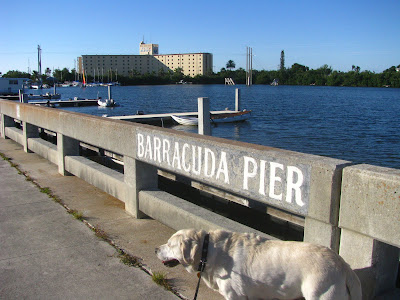 And in the other direction the houseboats many formerly of houseboat row on South Roosevelt Boulevard. 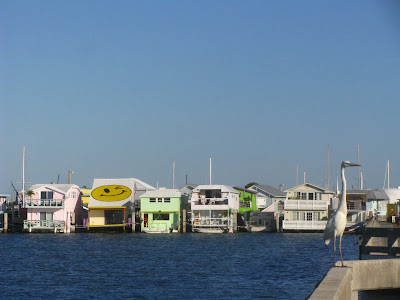 The dinghy dock serves the boats out in the city mooring field though some of these residents have stayed too long for their own good it seems: 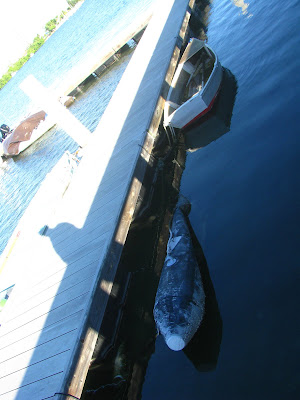 This is my idea foa trim little dinghy though it's ability to move through the water under oar power is compromised by it's lack of floatation in heavy seas. 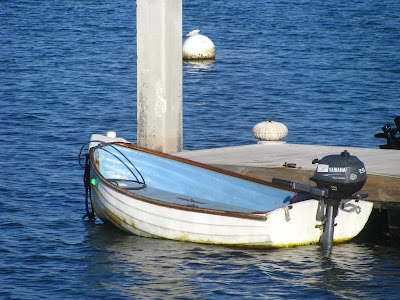 These inflatables are the preferred means of getting to and from boats, as they are ugly but stable and modern fabrics last a very long time. 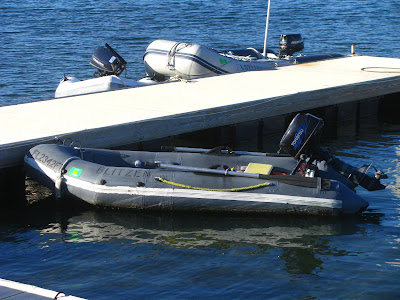 A close up of the bachelor officers quarters known for some reason as the Fly Navy building. the sailboats in front belong to members of the low key, low cost Key West Sailing Club. 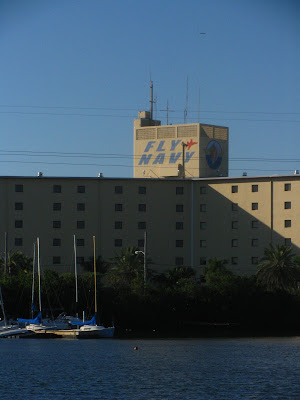 An afternoon flight out of Key West, propellor driven. 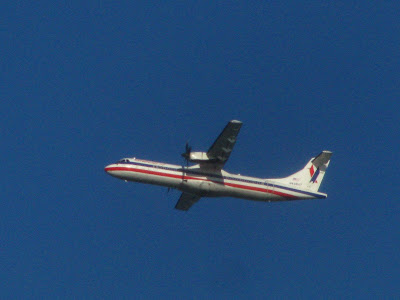 Cheyenne has gone off her raw hide treats at home, perhaps because she prefers chicken jerky strips, but a found raw hide in the parking lot got her complete attention. 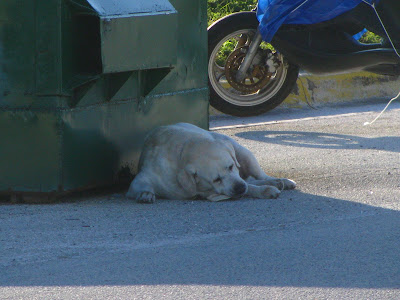 While she chewed methodically I sat and watched the world go by. 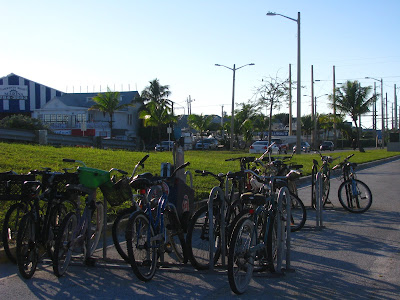 It took all her concentration. 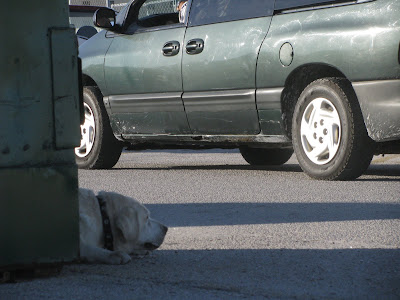 I saw this rather startling statement. At first I thought it was a Quebec'er with an unusually zealous outlook on life. 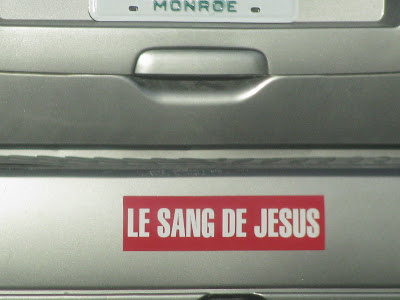 Then I realised it was a Haitian driver with a Florida tag. I guess about all they need in Haiti right now is more blood. Zut alors! as French speakers used to exclaim in comic books when I was a kid.
Posted by Conchscooter at 12:01 AM 16 comments: Links to this post