I am quite fond of this round up of images of my well traveled Bonneville. They don't cover every trip we've done together, and I hope to have more trips in the not-too-distant future. I have 84,000 miles on it and it's still running fine. The Vespa has taken some of the pressure off it as a daily rider but that isn't to say I don't like riding it. To me it's the ideal motorcycle for me, a solid all rounder and a great versatile daily rider. I can't ask for anything more from a motorcycle. It's long overdue an overhaul and that it deserves more than anything. Other bikes may come and go but this one stays. This and my old Vespa and my wife''s new Vespa. But the Bonneville is the go anywhere all rounder. Fast enough for freeway trafgic, agile enough for the city, planted enough for dirt roads. Reliable and fun. Great bike. Here's why:

The Bonneville From The Archives 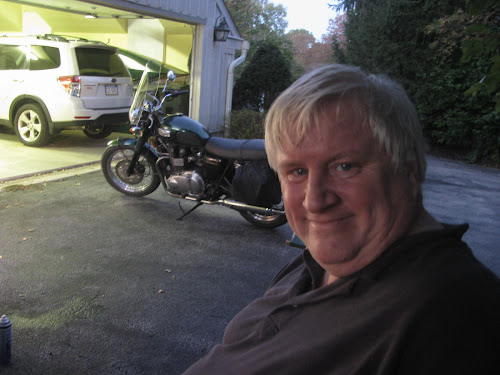 I have been sifting through the archives and it occurred to me I have been around the block a few times since I bought the bike in October 2007. Above I rode an Iron Butt to New York State in 36 hours, then I went to visit Jack Riepe in 2010 recorded in one of my better essays: Key West Diary: Riding With Riepe. I also rode across Florida to a conference and got to spend a long enjoyable day in the saddle exploring the back roads of central Florida. 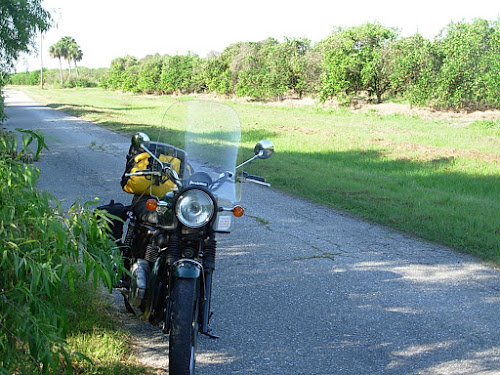 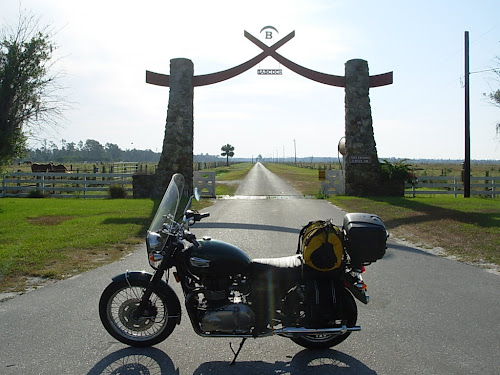 I used to use Triumph soft saddlebags made of cloth that was neither waterproof nor impervious to being twisted by the wind. After they tore from constant use I replaced them with heavier but solid and waterproof 1430 Pelican cases which I bolted to the soft bag frames. They still work just fine, seen here on a rain-filled ride to Georgia for a family gathering: 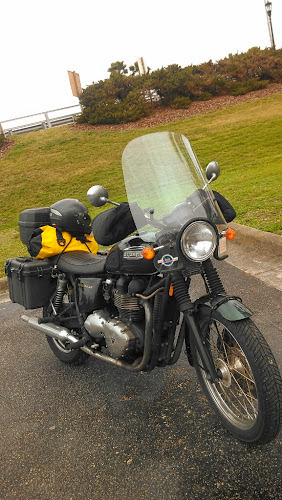 The Bonneville continues to run perfectly with almost 80,000 miles on the clock. 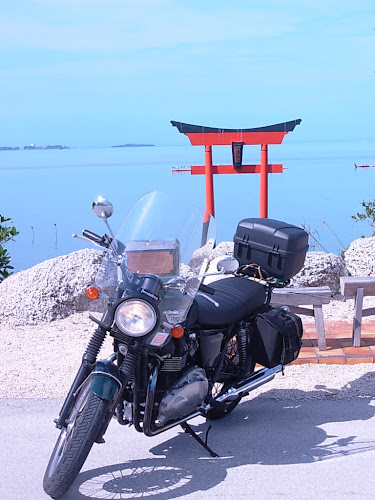 Back and forth on Highway One. 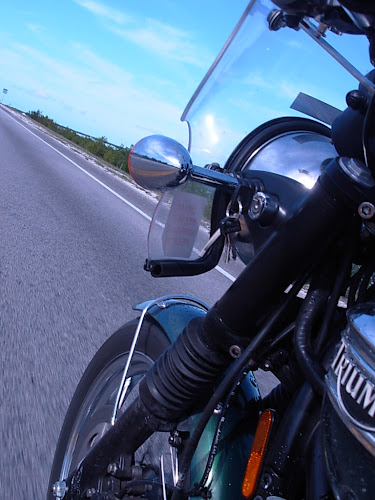 In the years between dogs, after Emma died but before I found Cheyenne, I did a lot of lonely Keys exploration by motorcycle. Fishcutters on Summerland became The Wharf: 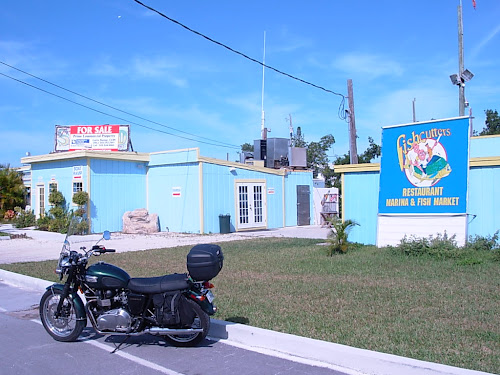 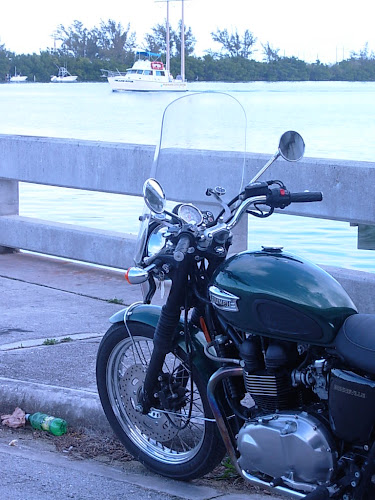 My preferred parking when going to a movie at the Tropic Cinema. 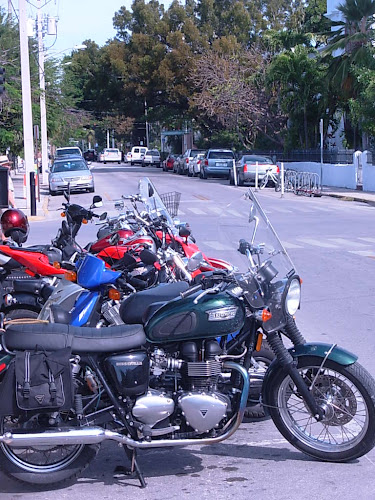 On my many miles of commuting I have seen fog a couple times: 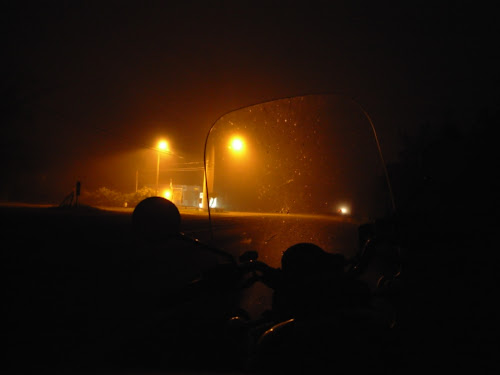 But this is, in my estimation the perfect motorcycling climate, usually between 65 and 95 degrees year round. 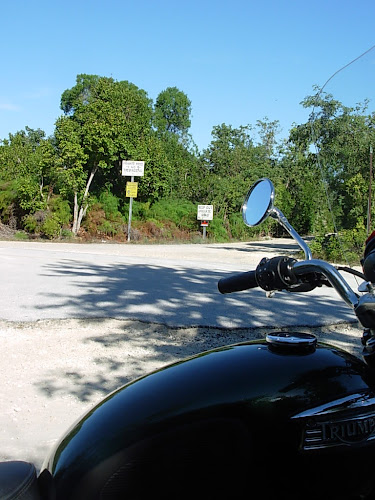 One year I rode my bicycle to the Summerland Key polling station three miles from my home, and the poll workers said I was the first cyclist they had ever seen. As time has passed I have cone to find less and less comfort in voting as money seems to count a lot more than what we the voters have to say, but so far I have not yet found the courage to ignore the process entirely. 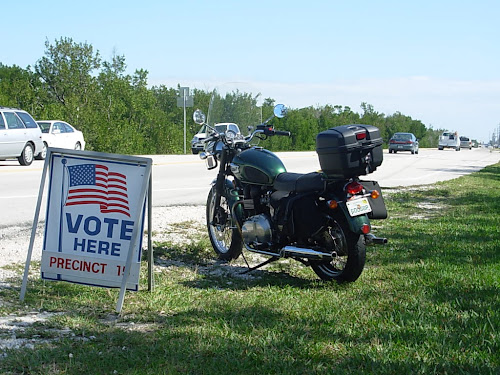 Another mainland trip saw me coming home from the Everglades on a Highway 27, my preferred non-freeway route across central Florida. Here at the junction southbound with Krome Avenue: 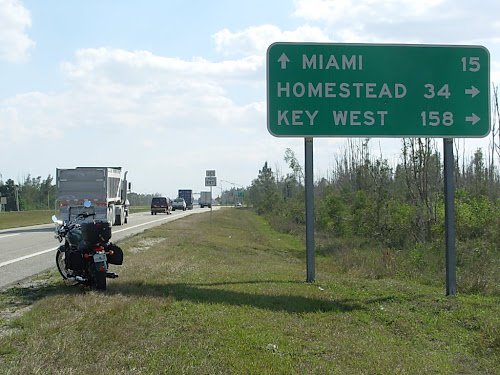 I also got held up by a massive wreck on Krome Avenue that trip which closed the road and I sat in the grass waiting...just as though it had been the Overseas Highway. 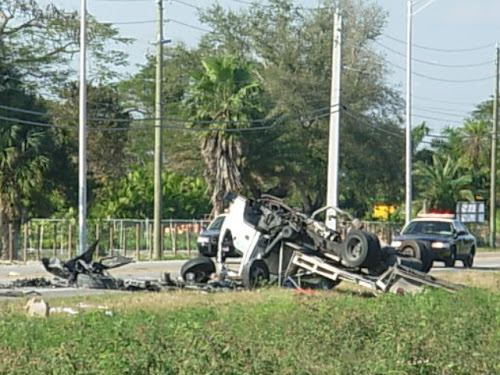 And as I usually prefer Card Sound road to the no-passing restrictions of the 18 mile stretch I found myself getting ready to pay the dollar toll to cross the Card Sound Bridge: 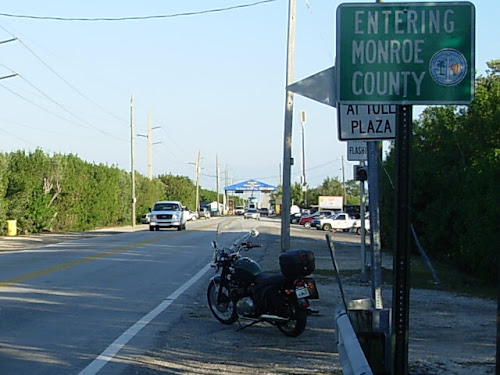 Frank Deford the NPR sports commentator also came to Key West in 2008, typical of the caliber of visitors to the Southernmost City in winter: 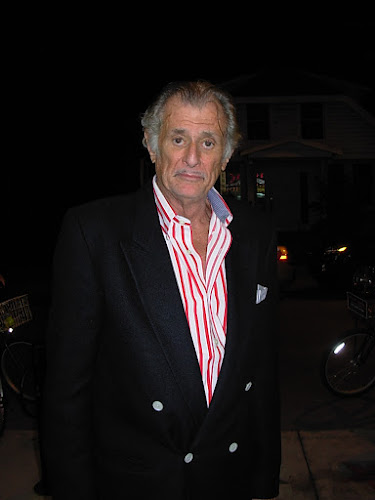 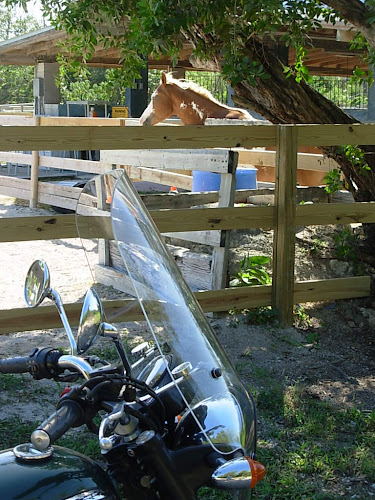 A day on Cudjoe Key, pre-Cheyenne, saw me riding out to the horses stabled on Asturias, and then visiting the flooded gravel pits on the other side of Blimp Road. Kids liked to drive around there and that of course had to be stopped so now they've blocked off the entrance, on the puritanical principle that fun must not be had. I'm sure it has you do with liability or some other such thing. 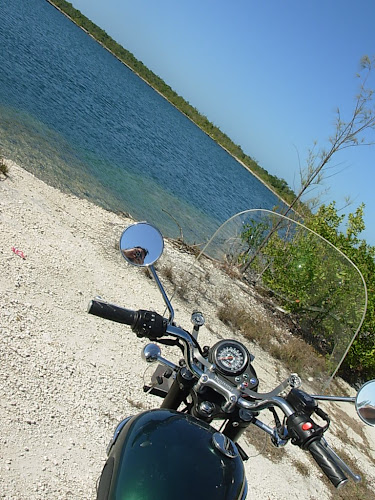 I would ride to El Mocho on Stock Island for my favorite Cuban food, truly the place where locals eat: 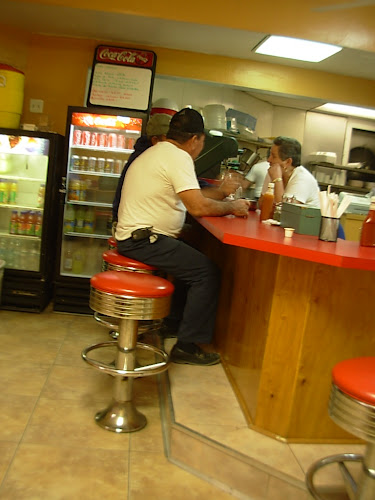 The Overseas Highway through Stock Island hasn't changed much: 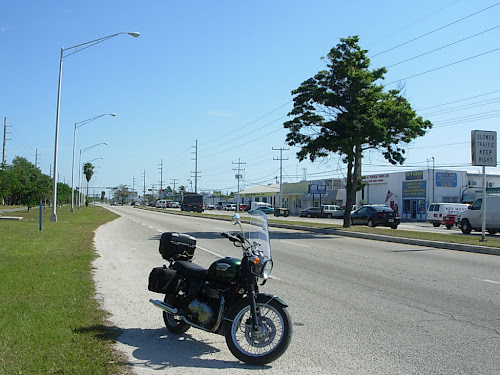 They've taken out a few passing zones when they recently repaved stretches of it (bastards!) but the sun still shines on a Highway One: 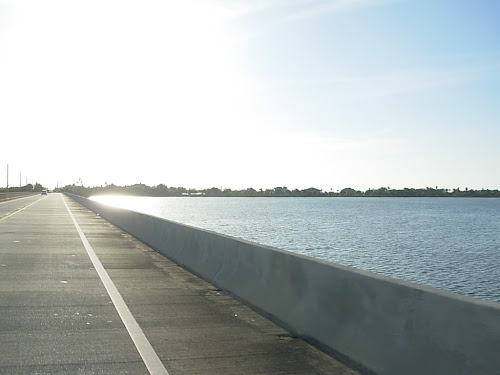 The Bonneville is an easy bike to ride, not light at 500 pounds but I find it scooter-like in the ease of the controls, so I enjoy exploring back roads on it, here at Bay Point, Mile Marker 15: 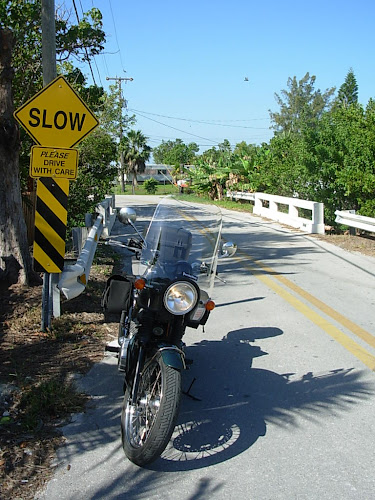 Also at Bay Point Knuckleheads didn't work but it made way for what appears to be a successful eatery called Kaya Island Eats. I ate there last week and it seemed pretty good, much better than my first visit when it opened, but I suppose that was to be expected. Kaya Island Eats 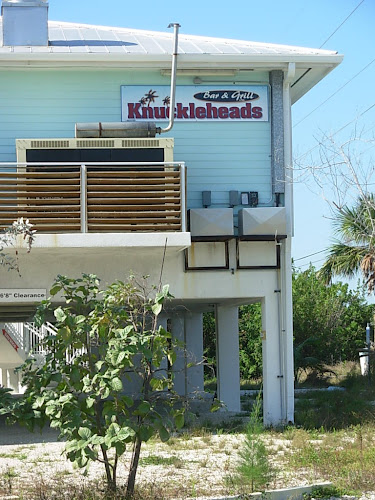 In 2007 I went to my home in Italy for the first time in 25 years and I rented a BMW 650 to ride around Umbria. It was a good bike but rather breathless compared to my easy going Bonneville. 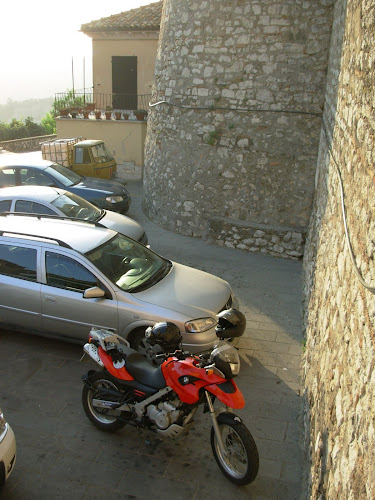 The Summerland runway is still there flanked by homes equipped with airplane garages. The signage is a bit more imposing these days. 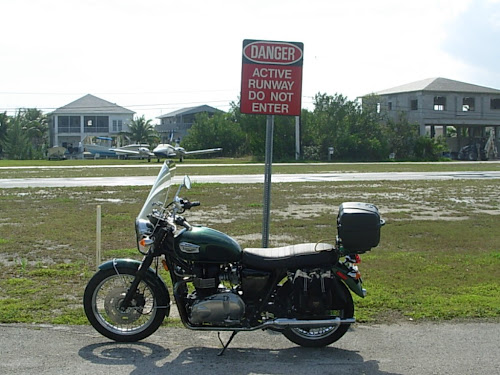 But the point remains the same, cars and airplanes shouldn't mix. 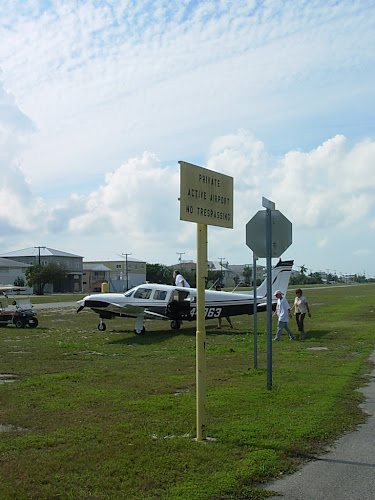 Part of the pleasure of the Key West climate is that it rains mostly in summer when it's hot and summer rain is no big deal. Hypothermia is highly unlikely on a commute around here: 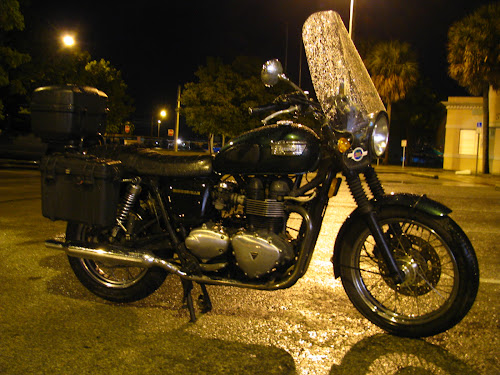 And the sunrise can be quite comforting as one rides home from a long night at work. 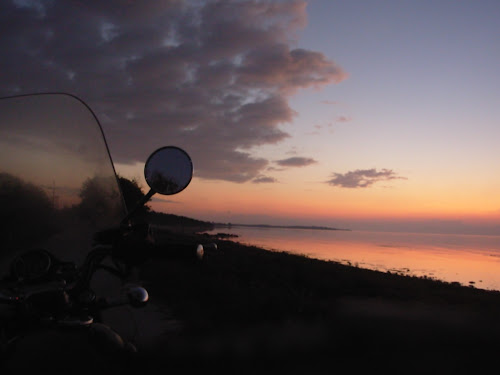 Just wondering, but have you ever thought about getting a sidecar for your bike so Cheyenne could go with you on your rides? Some goggles to protect her eyes....

Trobairitz said...
I enjoyed all the Bonneville pics.

Conchscooter said...
I went through the sidecar thing but it's five grand to slow the bike down, increase wear and tear and make parking awkward. Plus if I had Cheyenne with me in the car she travels more omfortably and can stay happily in the car when I arrive. Glad spring has arrived Up North though.
My Bonneville is the best bike iveowned. It still amazes me.
Sunday, April 13, 2014 at 1:05:00 PM EDT

Create a Link
Posted by Conchscooter at 12:01 AM 1 comment: