Even on a Friday the crowds following tour guides filled up areas of the museum. Field Trip! 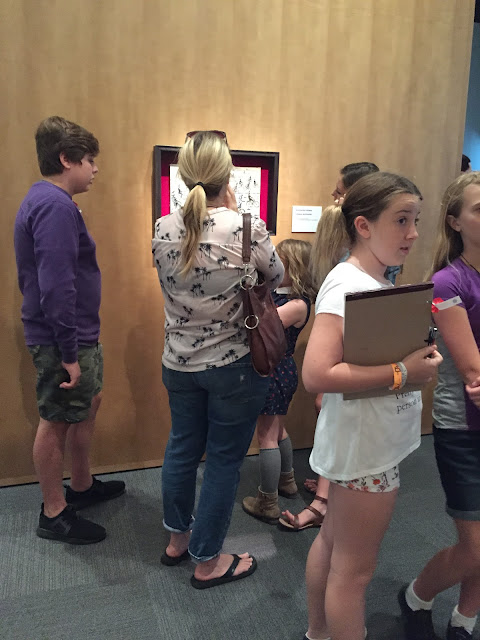 Dali superimposed his paintings on a statue (LINK), his commentary on Indian Treaties in the US 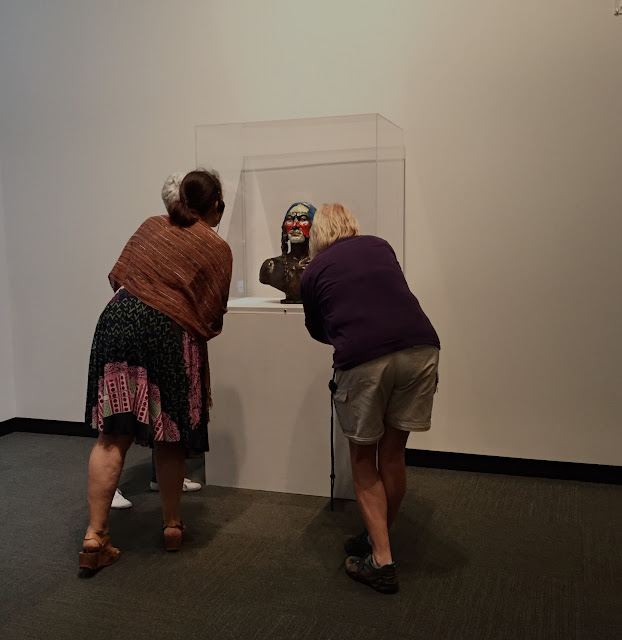 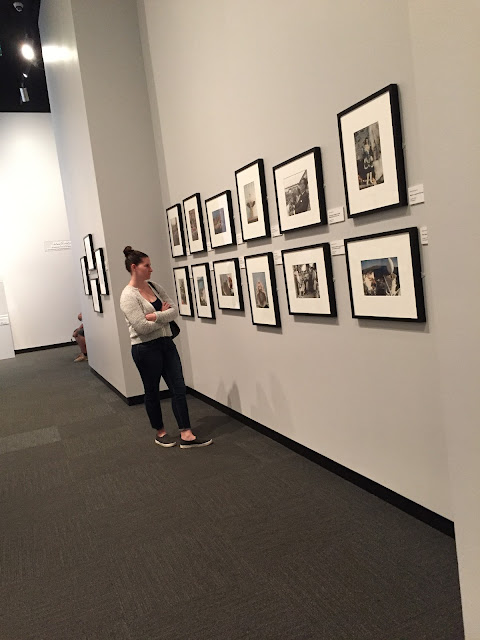 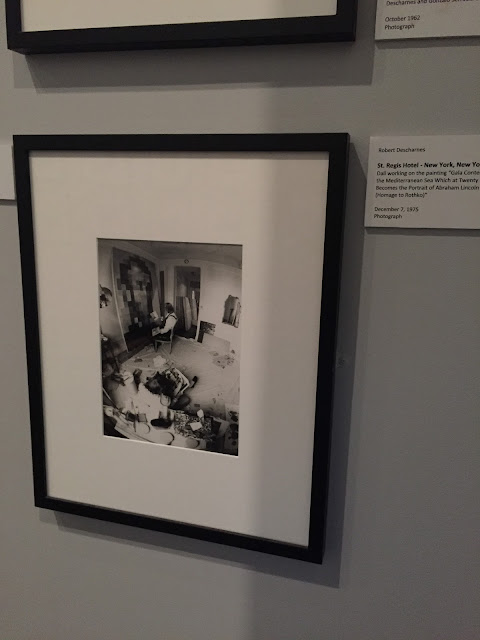 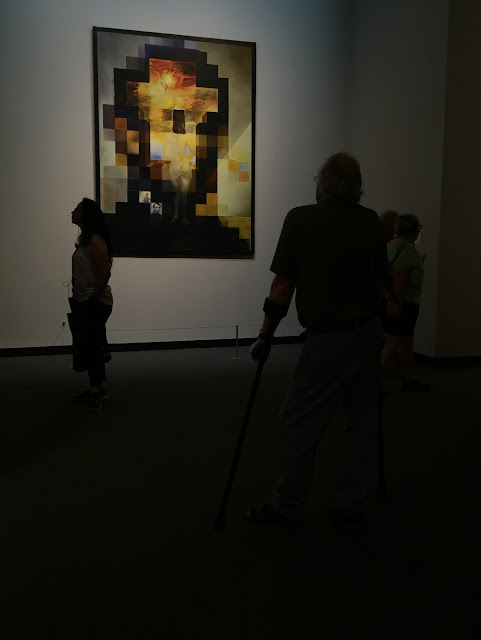 The Discovery of America by Christopher Columbus:
This work is an ambitious homage to Dalí's Spain. It combines Spanish history, religion, art and myth into a unified whole. It was commissioned for Huntington Hartford's Gallery of Modern Art on Columbus Circle in New York. At this time, some Catalan historians were claiming that Columbus was actually from Catalonia, not Italy, making the discovery all the more relevant for Dalí, who was also from this region of Spain. Dalí's inspiration for this work was The Surrender of Breda, another painting by Velazquez. Dalí borrows the spears from that painting and places them on the right hand side of his work. Within these spears, Dalí has painted the image of a crucified Christ, which was based on a drawing by the Spanish mystic Saint John. The banner that Columbus is holding bears the likeness of Dalí's wife, Gala. She appears as a saint, suggesting that she is Dalí's muse, and that she is responsible for his own "discovery of America," where he captured the attention of the world through her encouragement. The flies and the bishop at the bottom left are a reference to a Catalan folk legend (from Girona) about Saint Narciso's crypt. Dali uses this myth to underline his patriotic devotion to his homeland's independence. 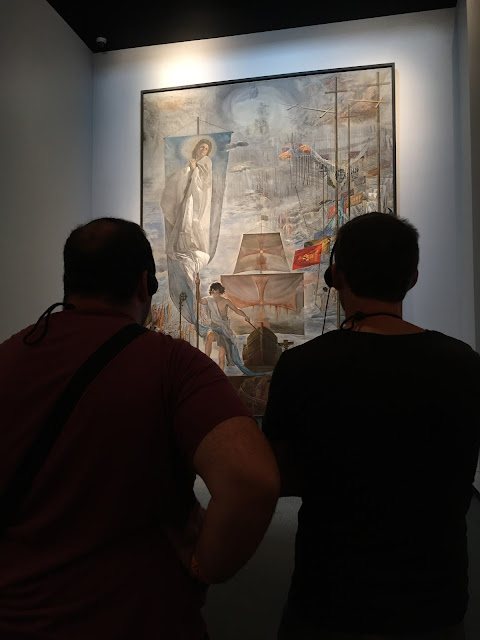 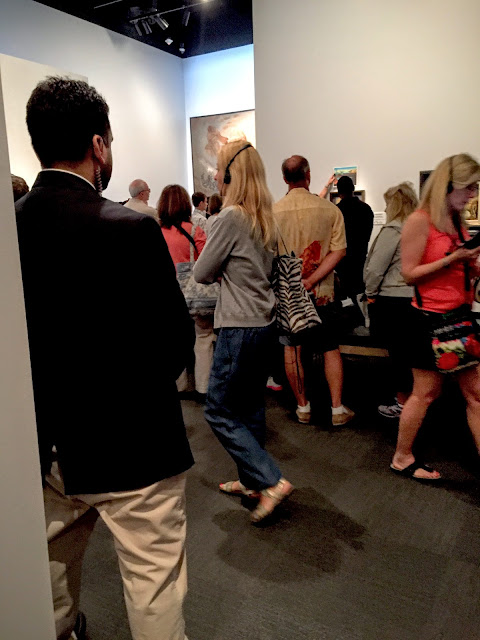 The Hallucinogenic Toreador:
Dalí conceived this painting while in an art supply store in 1968. In the body of Venus, on a box of Venus pencils, he saw the face of the toreador. This double image painting repeats the image of the "Venus de Milo" several times in such a way that the shadows form the features. Start with the green skirt, and make it into a man's necktie. The white skirt becomes his shirt. Travel up the figure. Her abdomen becomes his chin, her waist is his mouth, and her left breast is the nose. The pink arch forms the top of the head with the arena at the top as his hat. The tear in the eye (at the nape of Venus' neck) is shed for the bull. The red skirt on the right Venus is his red cape. 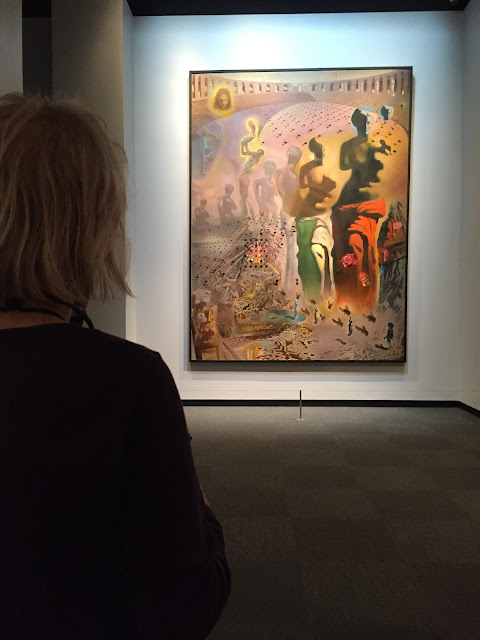 The Ecumenical Council:
This canvas honors Pope John XXIII for trying to unite the churches through the Ecumenical Council. The coronation of Pope John XXIII is depicted in an omniscient vision. It appears four times with three views in the center, and one in the upper right hand corner which was formed by pressing an octopus onto the canvas. Along the bottom of the canvas, the self-portrait of Dalí recalls a pose assumed by Velazquez, thus another acknowledgment of the Spanish painter. Gala is depicted in the manner of Michelangelo's Moses, but she also represents St. Helena as Dalí has revealed in another work entitled St. Helena of Port Lligat. St. Helena was the mother of Emperor Constantine; her emblem in art is the cross. According to the legend, Constantine had a prophetic dream in which an angel with a cross appeared and told him "under this sign you will be victorious." Perhaps Gala's appearance in this painting as St. Helena is a tribute to her unwavering faith, inspiration, and guidance which led Dalí to victory. 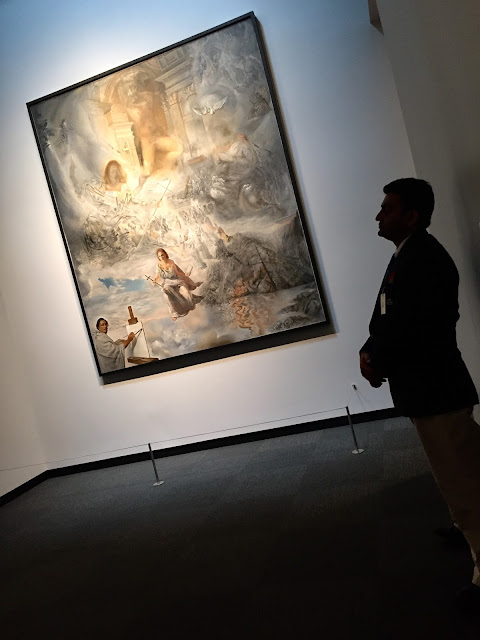 The spaces are vast inside the museum. 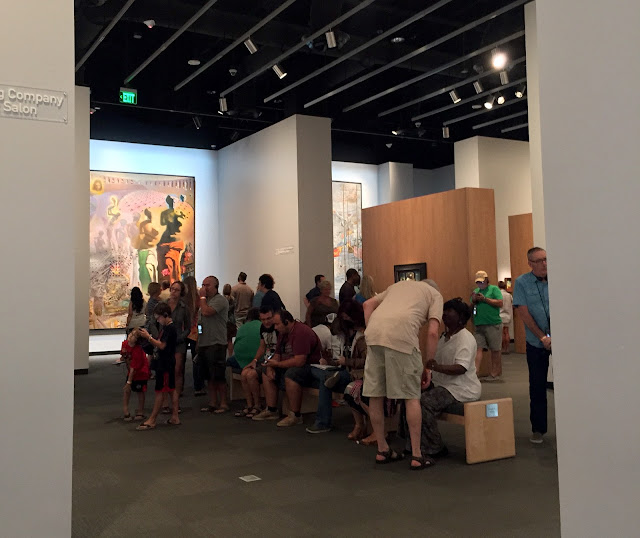 And they rate this spaceship hurricane proof. 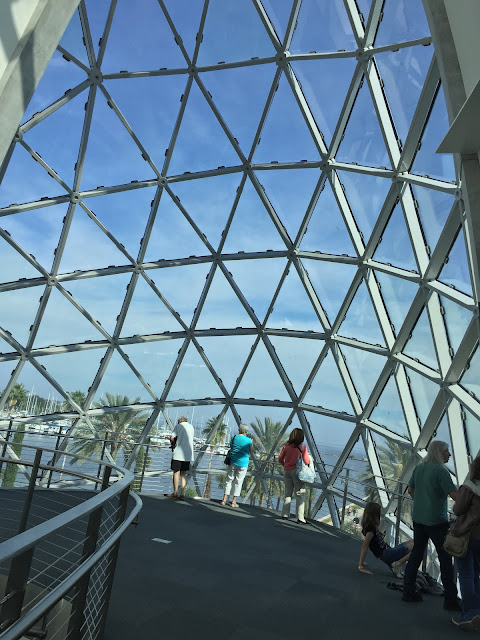 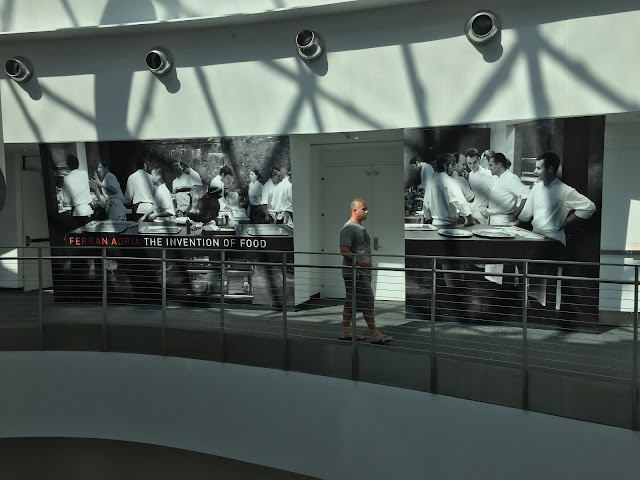 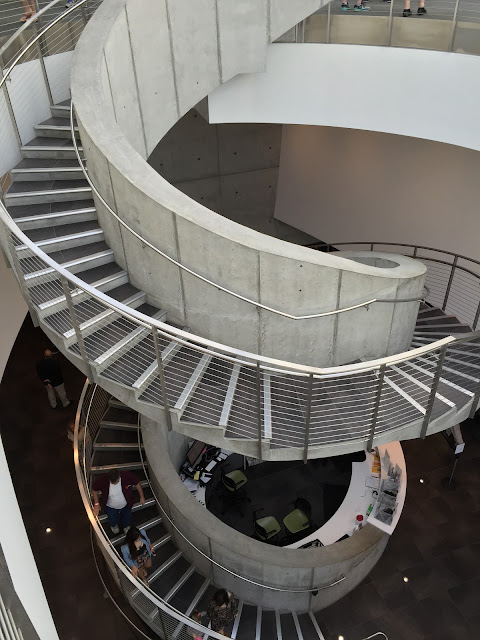 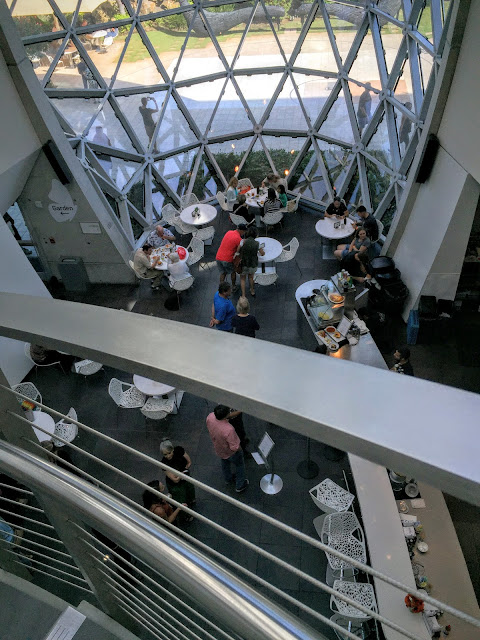 The museum is as capable of self promotion as the artist Dali himself was. You have to march through the store to escape. 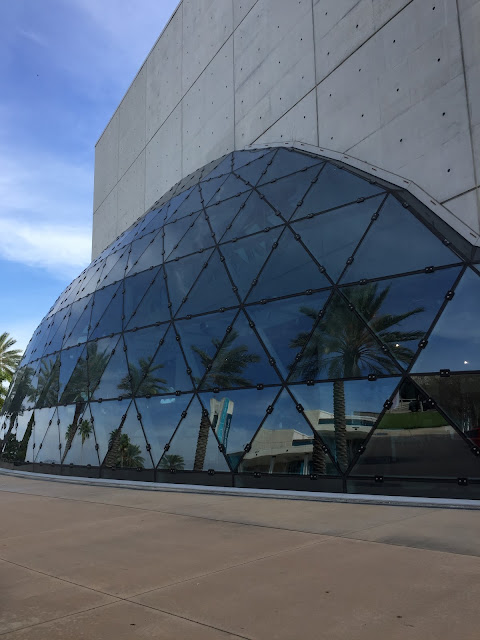 A most worthwhile place to visit. In the winter they promise a Frida Kahlo exhibit. We shall return.

An exhibition of Frida Kahlo’s paintings and drawings, together with her personal photograph collection, will open to the public at The Dali Museum in St. Petersburg, FL on December 17, 2016 and continue through April 17, 2017. Kahlo’s works have achieved monumental importance in art and popular culture. Her dreamlike work suggests that love and suffering create a new sense of beauty. Kahlo’s art and storied life stir immense public interest.

Frida Kahlo at The Dali will be Florida’s first solo exhibition showcasing the extraordinary career and life of the acclaimed 20th century artist. The exhibit will feature a collection of more than 60 Kahlo pieces including 15 paintings, seven drawings and numerous personal photographs from the celebrated female artist and influential icon. The exhibition will extend outdoors where a special collection of flowers and plants representative of those in Kahlo’s own garden at Casa Azul, her home in Mexico, will grace the grounds of the Museum’s Avant Garden.